My first blog post is actually about my first experience of cooking a Roast chicken.  As a quite (I like to think) experienced cook it may seem unusual that I have never tackled such a traditional and some might say easy meal before, but I cook chicken so often in so many different forms that when it comes to a roast I always opt for pork or beef. 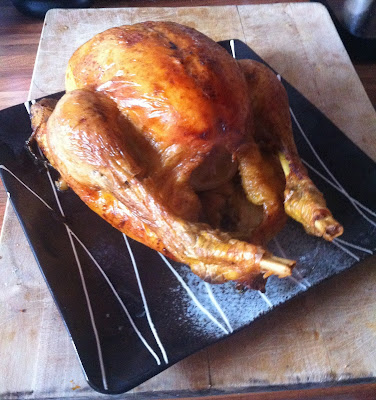 When I was growing up my Mother very rarely cooked any other type of roast than chicken, red meat “doesn’t agree with her” and my sister, was am incredibly picky eater as a child and refused to eat anything but, so more often than not we would have a roast chicken 2 or 3 times a week.  The fact I OD’d on it as a child may explain my lack of inclination to cook it now.

The willing guinea pigs for my first chicken roast were my boyfriend Nick (Mr Puddings & Pies), his sister Emily and her partner Steve.   Mr P&P  will eat anything that’s put in front of him but Em and Steve are MASSIVE foodies who have eaten their way around the world and love to cook.  No pressure then…..

In all honesty I don’t even make roasts very often, sheer laziness often results in heading to the pub for Sunday lunch with all the trimmings.  In my opinion the best roast in Brighton is at the Walmer Castle, they do up to 10 different kinds of meat, ENORMOUS (even if a little overcooked sometimes) Yorkshire puddings and about 8 vegetable accompaniments for £8.95.  I used to think that the Lion & Lobster could not be beaten, but they’ve upped their price, reduced their portion sizes and they, rather cheekily I think, charge for Yorkshire puds if you haven’t picked the beef option. Only 40p, but it’s the principle.

On the menu this Sunday was: 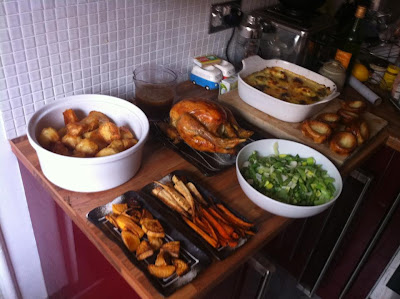 I’ve always teased my Mother mercilessly for her inability to coordinate a roast dinner, but actually, unless you have a huge oven it is pretty difficult to time it all to perfection but the way I did it it worked out pretty well.

Peeled and chopped all of veg for roasting

Steamed broccoli and cauliflower heads and then broke into florets

While the oil is preheating parboil the potatoes

Add the potatoes to the oil and leave in the oven for an hour then check, I actually left mine in for nearly 1.5 hours

Remove the chicken from the oven and leave to rest

Put in the cauliflower & broccoli cheese and Yorkshire puddings

Make the gravy and transfer to a warmed jug and cover 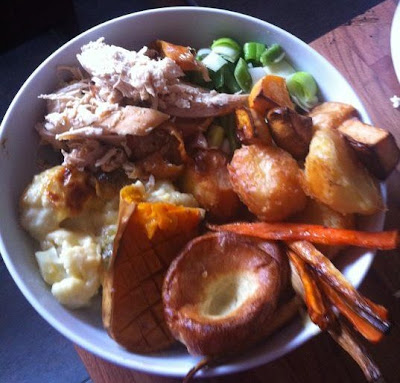 1 bulb of garlic skin on and halved across the bulb

Chicken stock (I used one of the jelly stock pots)