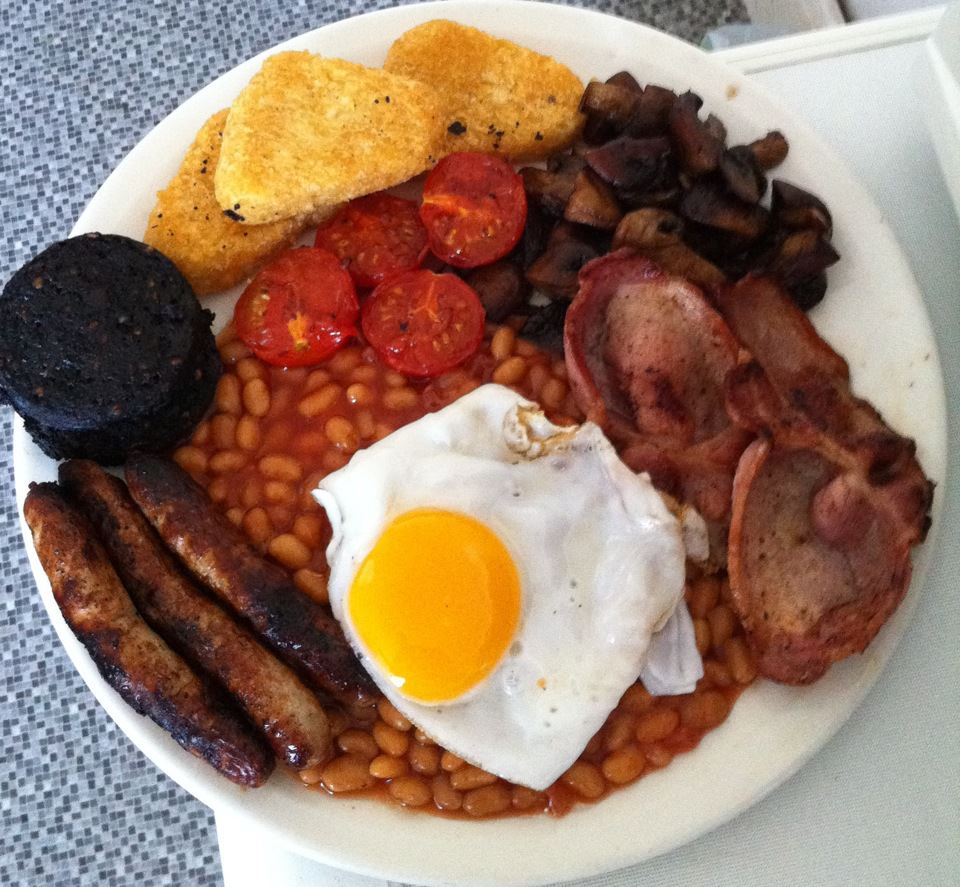 I am a huge fan of a full English, for me they are “the one”.  Thankfully Mr P&P feels the same so every weekend since we’ve been together we’ve indulged in some variation of a cooked breakfast (almost always cooked by me). Above is an example of one of my very own fry ups (the toast is out of shot).

After a particularly heavy night we decided to venture out for breakfast, which instantly sparked a (slightly heated) debate as to where in Brighton sold the most superior fry up.  I said Billie’s he said Carats. Too hungover to properly fight my corner, I aquiesced and set off for Carats.

At this point we were unaware that this was going to turn into a full-on contest so unusally for me I didn’t take a photo. The photo would have said the same thing as I did though: It was fucking horrible.
Deep fried sausages made from the lips & arseholes of unidentified animals who no doubt died crying in a pool of their own excrement.  Two rashers of cheap bacon, one rubbery egg, beans which were most definitely NOT Heinz, TINNED tomatoes which had given off so much water that it had soaked the toast.  I ordered some sauteed potates and black pudding as an extra which were OK. With the extras my breakfast came to nearly £10 and didn’t include a drink.  I only said “I told you so” a few times 😉 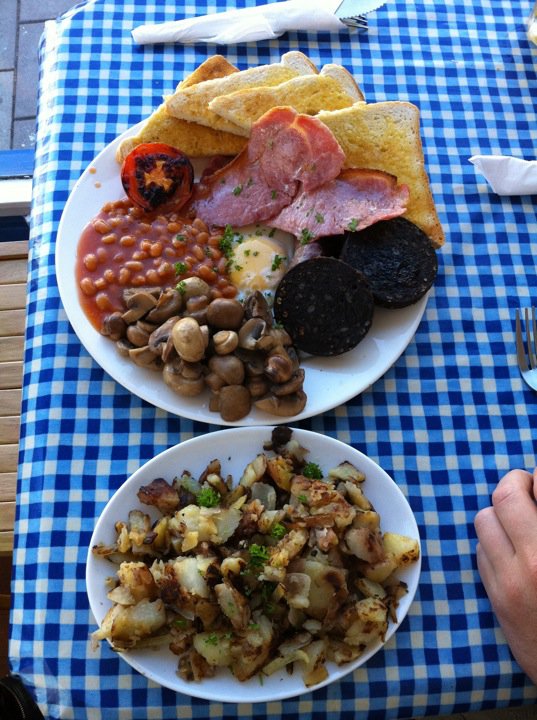 
I’ve been coming here many many years, hence my confidence that it was one of, if not THE best breakfast that my home town has to offer.  Local bacon and sausage (obscured by the black pudding) Heinz beans, perfectly cooked egg, juicy tomato and two slices of BUTTERED (I hate margarine) toast.  My only verrry slight gripe is the fact that the mushrooms were braised not fried but that didn’t stop me from demolishing them all.  The potato hash and black pudding were paid for extras, the BP was £1 and the hash £1.95 (but easily served two.  The total bill came to £19.90 for two breakfasts, extras, orange juice, can of coke and a tea. Still, in my opinion, the best there is available in Brighton. No website but directions can be found here. 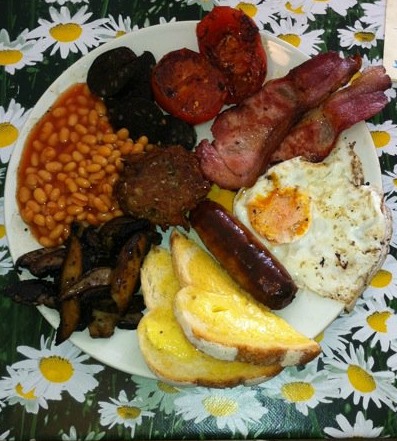 This place came recommended by a foodie friend of mine that used to work there so I had high hopes.  Tucked away down Ship Street gardens opposite the sexy shop you would never know this place is here. Lovely sausage and bacon, cooked to perfection, and black pudding as standard I was delighted with the meaty element of the breakfast.  Mushrooms were lovely, the toast buttered and a whole tomato rather than a half always gets a thumbs up from me.  Buuuut, the potato cake was GREY inside and the broken egg yolk was almost unforgivable. The local ingredients and amazing bacon dragged the score back up, I probably would have given it a 7 but Mr P&P wanted to give it a 9 so we met halfway. Reasonably priced at about £7. Website can be found here. 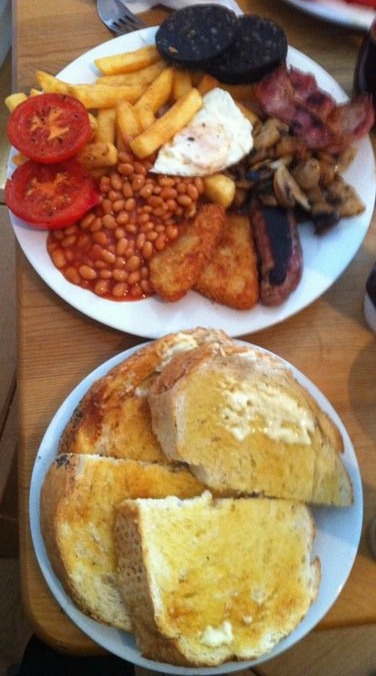 
I used to walk past this place every day for 6 months on my way to work, despite being in the London  Road area it actually looked pretty nice.  Incredibly generous portions, a real carb-fest with two slices of (buttered) toast, chips AND hashbrowns. Black pudding and a whole tomato as standard. Slightly too many (cheap) beans and not enough mushrooms.  Meat quality was pretty good & the bacon was nice and crisp.

For £6.70 with a hot drink included, this was one of the best value breakfasts we found.

BEWARE: After googling for a website I found this highly alarming review. AVOID at all costs! 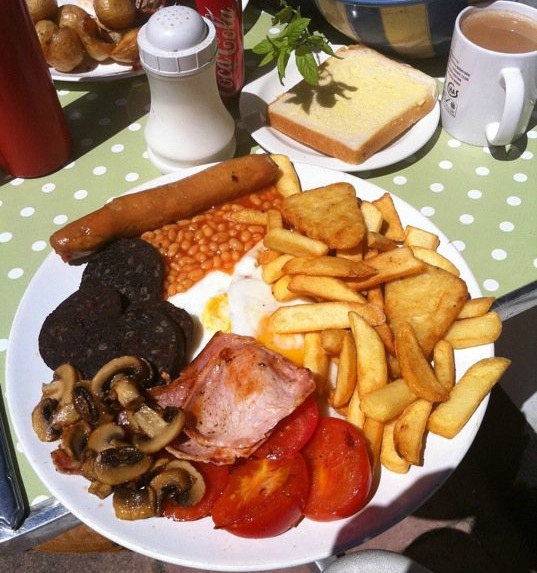 This archetypal builder’s “caff” (but with oddly feminine decoration) tucked away in the Seven Dials, I’d heard reports of large portions of an average standard at a low price.  This was as I discovered, entirely the case.  Chips AND Hashbrowns again, the most revolting sausage that should have been encased in batter and served at a bog standard chippy.  Nice bacon and mushrooms with two whole tomaoes.  We had another unforgivably hard egg yolk situation stiff bread with cheap margarine- bleurgh. Buuuuut at just over £6 it was good value, nice black pudding and tea included too.  No website but they do have Facebook. 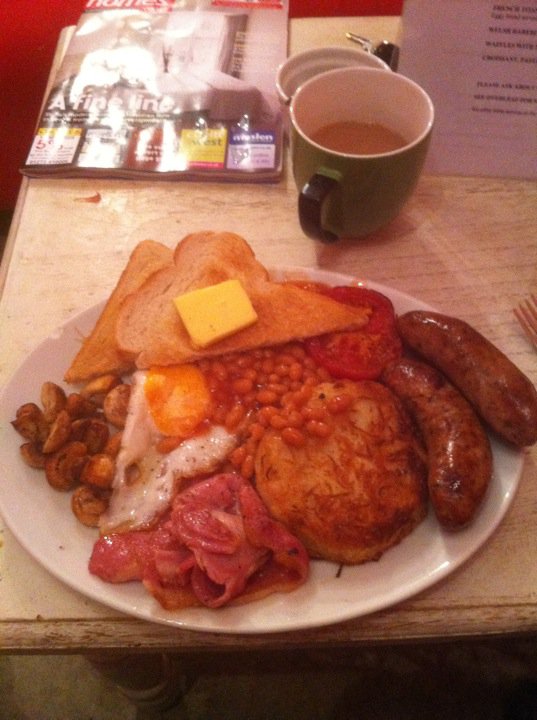 Just at the bottom of my road it’s always been a firm favourite of mine.  Everything on the plate was perfectly cooked other than the egg yolk was a bit overdone. The meat was really high quality but it lost points in this area for having no black pudding on the menu, I had to pay £1.50 extra for the potato rosti and tea wasn’t included in the price. The breakfast itself was around £6.  No website but directions here. 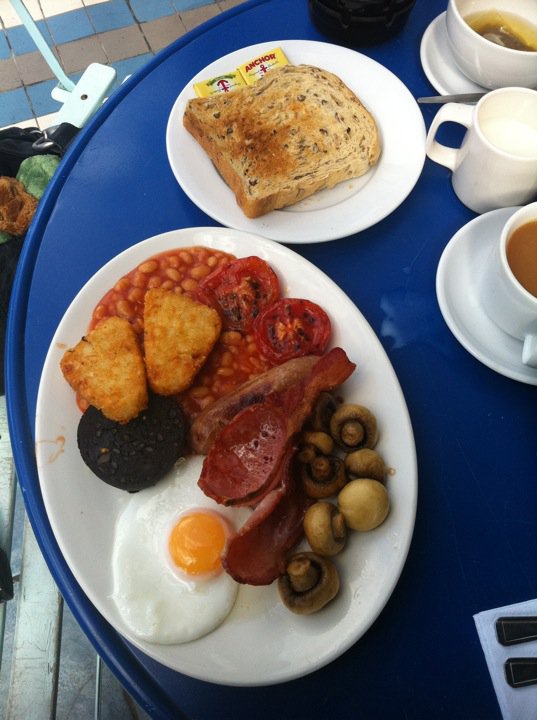 Another place I’ve been coming for nearly 20 (fuck I’m old) years so I had high hopes for the so-called “greedy breakfast”.  As you’ll see from the picture i think the term “greedy” is pushing it a bit.
Really nice quality meat, tea included and yummy toast were the good bits, flaccid mushrooms and slightly rubbery eggs (albeit with a perfect yolk) were mediocre and the beans and tomatoes were, at best, luke warm.  The service was slow but to their credit they apologised profusely and gave us one breakfast free which improved their score.  At £8.90 with another £1 for beans this was one of the most expensive. LOVE the fact that they give you black jacks and fruit salad sweeties with the bill.  Website can be found here. 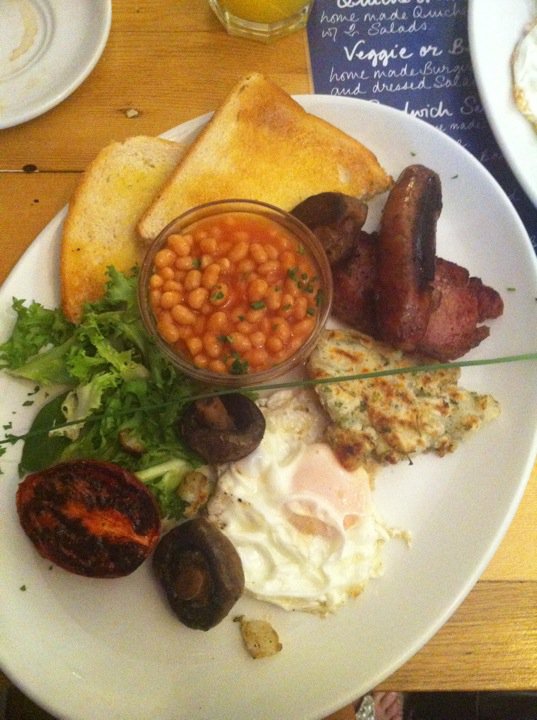 I had asked on Facebook for peoples’ suggestions of where to try next and this was suggested a couple of times by people whose opinions I trusted… well not anymore.  Look at the state of it!!  One sausage, one rasher of bacon, THREE mushrooms  and what on earth possessed the chef to put a salad garnish on a fry up? A tiny slice of weird potato cake and no black pudding option either. However, the egg yolk was the perfect consistency and all of it was fairly tasty, just not enough of it and the strangest presentation ever.
I can’t remember how much it was, however much it was though, it was too much! 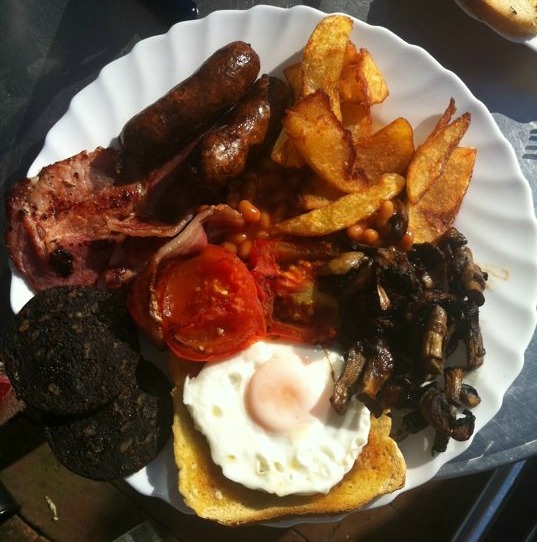 Tucked away in the arse end of the North Laines I’ve walked past it many a time but never been interested in going im cos it looked a bit… grimey. However, in the name of research (and because there was a table outside and Mr P&P was paying) I decided to give it a go. The only place I’ve found that offers fried bread as standard. Cheap nasty sausages which I fear were deep fried. Nice crispy bacon and the black pudding was good. Choice of sauteed potatoes or hash browns The mushrooms were luke warm, as was the tomato and the beans definitely weren’t Heinz. About £6.50 it didn’t include tea.  No website but directions here. 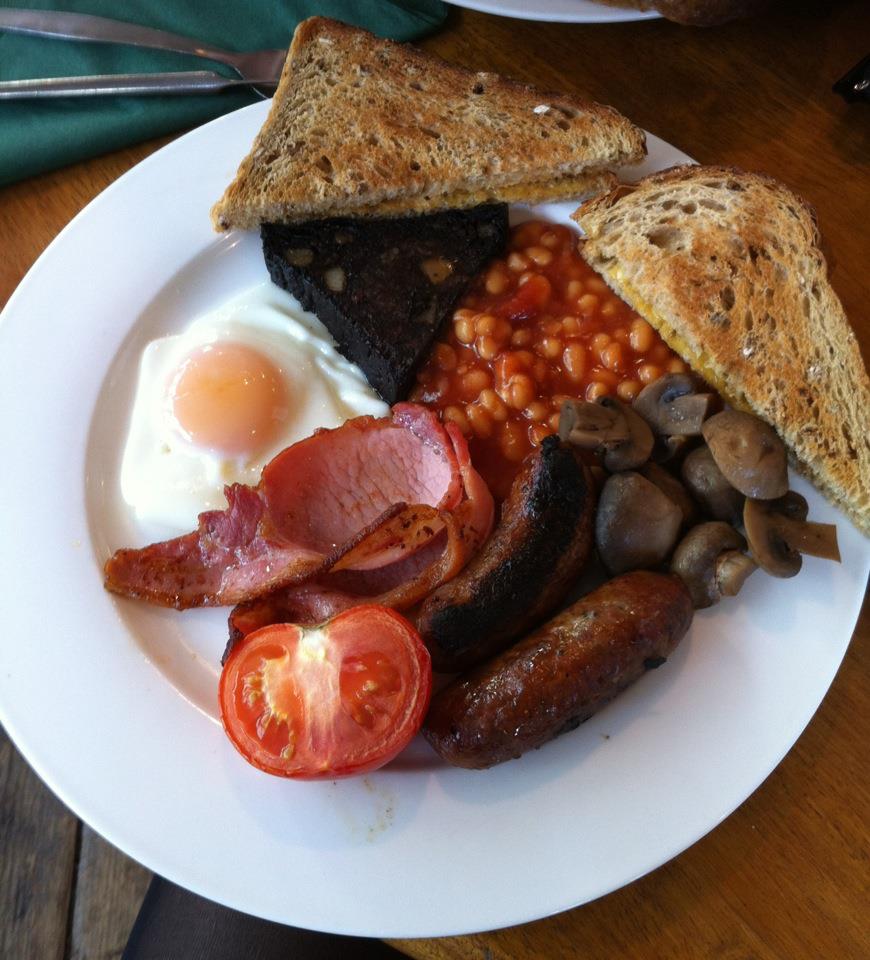 Also in the North Laines the food sold on the menu comes predominantly from their own farm Jessups Farm which is reflected in the quality and the price.  In fact it was the best quality of any we’ve had BUT the smallest portions: only half a tomato, tiny amount of mushrooms and one egg. No hash brown and the most expensive standard sized at £7.70. Perfect egg yolk, delicious sausages and the nicest black pudding I’ve ever tasted. All the meat was grilled so not greasy at all. Website is here. 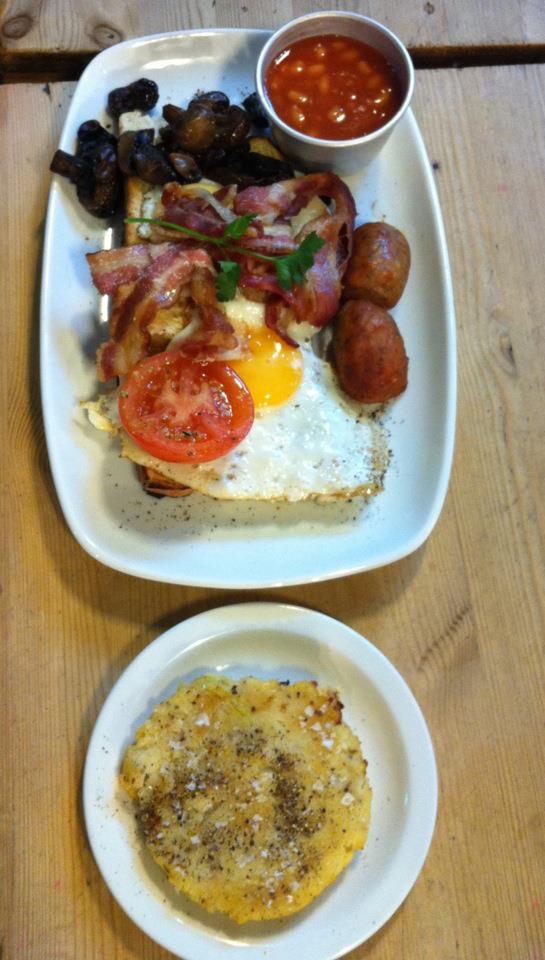 This is right next to Farm & I had high hopes for it.  Bills is incredibly popular and hyped up in Brighton.  Mr P&P took me for breakfast there on my 30th Birthday.  I wanted to give it 7.5 and he wanted 8.5.
Lovely quality ingredients and good sized portions, 2 eggs but only half a tomato. Was warm rather than hot, the waitress offered to replace it for me even though it was half eaten and when I declined she gave me a free cappuccino. Most expensive of all and charge extra for baked beans (!!) and bubble & squeak. So £9.95 in total. This is their website. 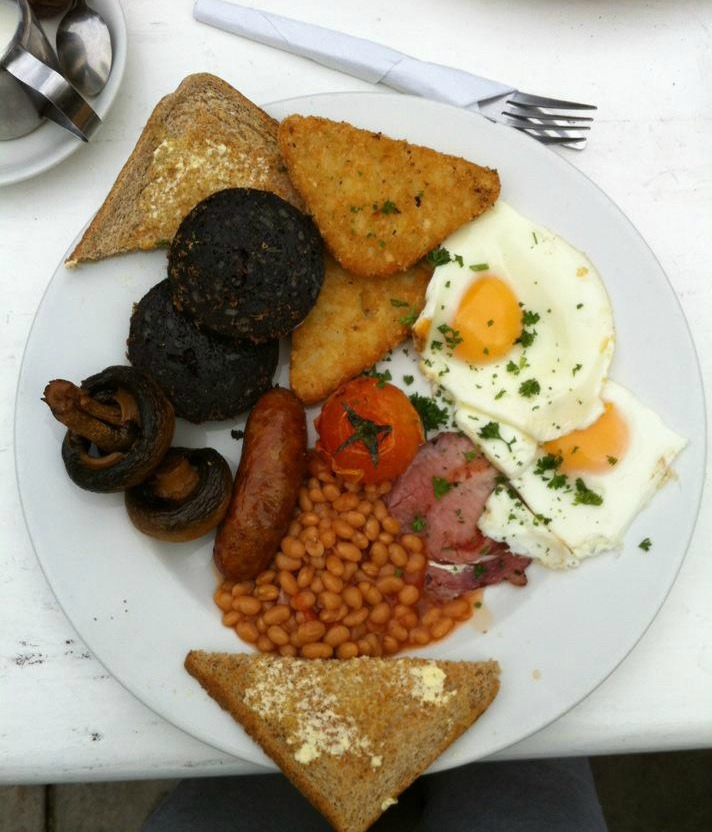 The morning after my 30th Birthday party  *shudders at the thought of that hangover* too hungover to limp any further afield than St James Street we ended up in “The Street”.  Despite being very late October we sat outside.  Good size and tea thrown in for £6.95. Despite being rather “wittily” named “The Big One” it had a horrid (small) sausage, rubbery eggs which definitely weren’t free range and anorexic toast with marg. OK bacon, nice hash browns, a whole tomato and Heinz beans.  Despite nearly throwing up in my mouth a few time I managed to force the whole lot down, and keep it down.  As breakfasts go it was, at best, mediocre. 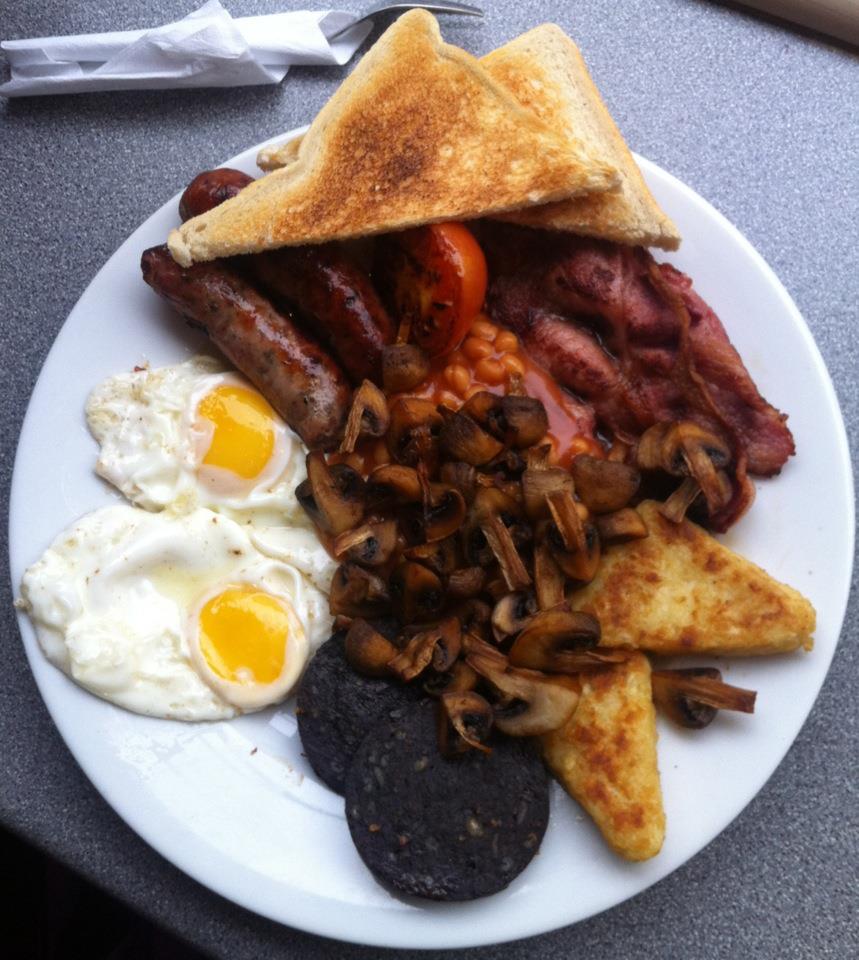 I’m not sure whyI was a bit dubious about this place, but I was.  It actually turned out to be one of the best.  I still favour Billie’s but Mr P&P is adamant that this is the best so they are currently in joint first place.
I ordered mushrooms and black pudding as an extra which was met with a raised (judging) eyebrow from the guy behind the counter.  As usual I demolished the lot and very nice it was too. The sausages were herby and delicious, the bacon a bit dry but still tasty and everything else was pretty flawless too. The hash browns were particularly good.  Only half a tomato but buttered toast and crispy mushrooms made up for it.

So in summary, there are MANY options for a good quality Full English in Brighton.  There are still more on my “to do” list so I’ll do a follow up post at somepoint.  I think we may also have to revisit the current joint top spots to try to determine a clear winner.

I have revisited the current top spots and a few more, read the post here.