As I’ve already stated in previous posts I ADORE Valentines Day, food, romance, presents etc- what could be better! Tradition in the P&P household now dictates that he takes me out for a meal and I cook him an elaborate one.  He took me to The Coal Shed, the review of which will be my next blog post.

Having rediscovered my love for the spectacular fishmongers, Brighton and Newhaven fish sales down by Hove lagoon and Mr P&P discovering a love for lobster (not a cheap date) I rang them in advance of my visit down there and reserved a cooked one so I could attempt my first lobster thermidor for the main course.

I arrived there to be greeted to queues out the door so waited patiently in line planning the rest of my purchases and anticipating a big, fat, pre-cooked lobster as well… how wrong was I.  The extremely apologetic lady behind the counter told me that she had in fact sold my lobster by mistake but that they would happily cook me up another one if I’d like.  While she was off arranging this I chose a large bag of mussels & cockles which came to only £5.60.  I cooked these for the first course in a mariniere (How the fuck do you do accents on a Mac???) style sauce.  I didn’t work to a specific recipe as I’ve cooked it so many times before but google has plenty of recipes.

The previously apologetic girl came out looking even more apologetic…  There was a problem with their Calor gas so they were unable to cook the lobster for me, but they were happy to sell me a LIVE one for £12, apparently they aren’t allowed to kill them for customers by any other way than cooking them to death.  I’ve always always said that I feel like I should wring a chickens neck before I die, not for any sort of blood thirsty reasons, but because I do think it’s somewhat hypocritical to be happy to eat an animal and not be prepared to kill it. Unfortunately Mr P&P is not of the same mindset and was absolutely horrified when he discovered that his romantic supper was still alive and kicking (literally) and sitting on the front seat of my car.  As if I didn’t feel guilty enough, he decided to name it as well…

The girl at the fishmongers assured me that if I put it in the fridge then he would fall asleep, I thought this only worked in the freezer but she insisted that the fridge would do the same job… sadly, she was completely mistaken.  When I took him out of the fridge the following evening he was very much alive.

I placed him in a large pan of cold, salted water, over a high heat and put the lid on, tightly, and left the room.  I went back in about 10 minutes later, the water had come to the boil so I turned the heat down and simmered him until he was the below colour. 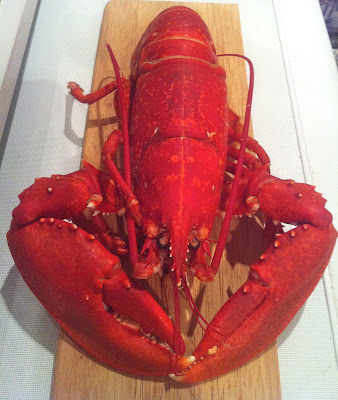 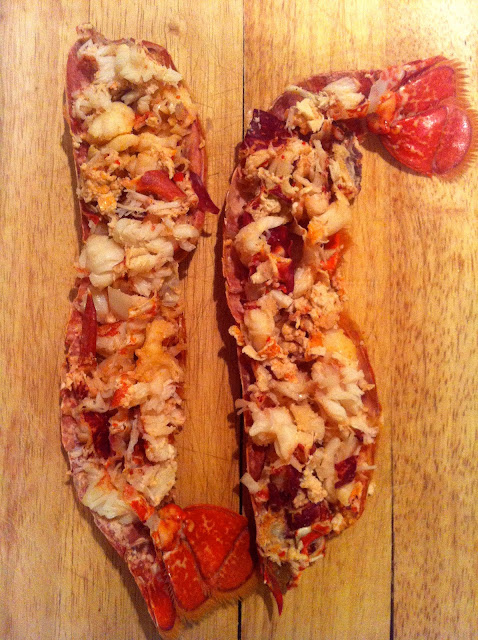 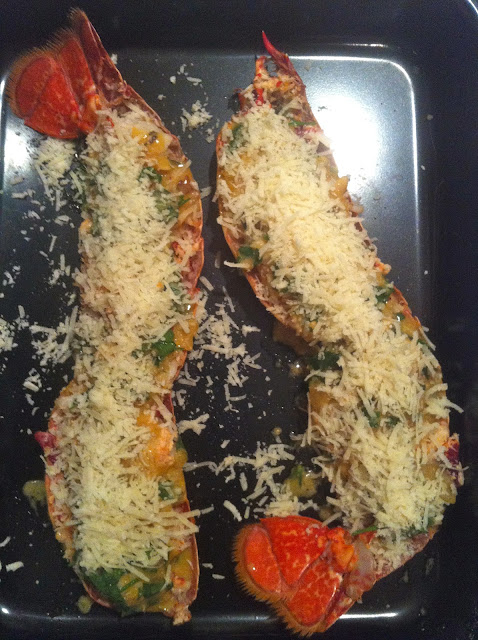 I served with a watercress, spinach & rocket salad and homemade shoestring fries, which I sliced by hand (labour of true love) but you could use a mandolin or a food processor if you have that kind of attachment. 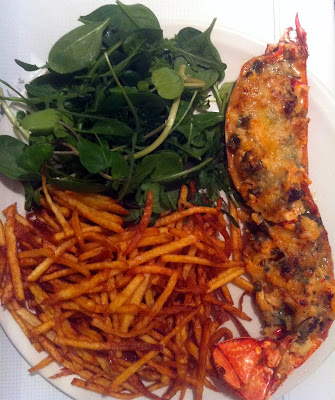 All in all “Dave” was absolutely delicious, with Mr P&P declaring it one of the best meals I’ve ever made him… although I am becoming less convinced every time he says it as I suspect it may be some sort of challenge so that I continue to make him meals of escalating extravagance!

We had shop bought cakes for dessert (oh the shame) but I plan to make him a four tiered Red Velvet cake in the next few days… photos and blog post to follow.