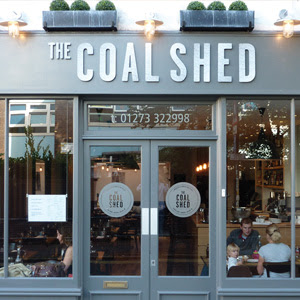 After announcing that his Valentines Day evening was going to be spent watching the Brighton v Millwall game, Mr P&P realised he had some serious making up to do, so booked us into The Coal Shed for supper on 13th Feb.

We were seated in the window at a table for 4, albeit an extremely large table, but when they seated a couple at the table with us (without telling us they were going to do so) it was a little intrusive.  They were clearly on a first date and hideously mis-matched so it was actually quite entertaining.  When she went to the loo he struck up a conversation with us, telling us that he was a partner in Due South & Riddle & Finn- I know the owner and have met his business partner before so not only was this guy on a rubbish date with a girl that was scared of Harry Potter (seriously) he was also a complete bullshitter as well which only added to our amusement.

As ever I was hideously indecisive about what to order, I was stuck between the Steak Tartare and the Steak & Oyster pie- braised shin of beef with two oysters on the side, I asked the waiter to choose for me and he chose the steak tartare, Mr P&P went for the bone marrow.

(Apologies for the slightly grainy photos, forgot to bring a “proper” camera)

I tried the bone marrow and it was delicious, really flavoursome, it was £5.50 and had it have been any more than that it would have been too small a portion but for what it was, it was good, just not worth raving about.

My starter was also very nice indeed, again, a fairly small portion, it was £7.50 for what you can see above plus a couple of slivers of toast.  I liked it, but for the same price I think the steak and oyster pie probably would’ve been better value and more filling!

According to their website they want to be “known for serving the best steak in Brighton”  they say “The key to our success is the fiery heat from our coal “Josper” oven which instantly sears the meat. This, combined with the high quality, locally sourced meat will give you a taste sensation that leaves you begging for more”… I enquired as to whether or not Mr P&P would be “begging for more”, he said that  it was good, but not exceptional.  It cost £14.50 with £1 for a sauce (bone marrow, bernaise or peppercorn) & £2 for a portion of  chips.

The steak burger﻿ was the most generously sized dish of everything that we ordered.  I asked for it to be cooked medium, but it definitely erred on the rarer side of medium rare, which, for me, wasn’t a problem but I think someone less partial to a bit of bleeding meat (that sounds so wrong) would have sent it back. The burger with a portion of chips was £8.50, I had extra cheddar and bacon (£1 each) and a heritage tomato salad (£2) on the side.

﻿﻿The salad was nice but the portion size was a little mean I thought, I’d seen a photo of it on a review on another food blog and it was much more substantial in size.  Still a good selection though considering that they are so out of season.

Mr P&P was “too full” for dessert but strangely enough managed to force down a few mouthfuls of mine… We both sniggered when it was brought out at the, um, skidmark like streak of chocolate adorning the plate… not quite sure what they were trying to achieve with the presentation but nevertheless it was yummy, the salted caramel pecans were the highlight, so much so that I’m going to try and recreate them myself.

All in all it was a good meal, not amazing but better than the “mediocre” rating that one of my foodie friends had given it. Would I go back?  Yes, I probably would, but there are plenty of other places I will be re-visiting first.

The whole meal came to £50.10 (we didn’t have any alcohol) which for 2.5 courses each was pretty reasonable.