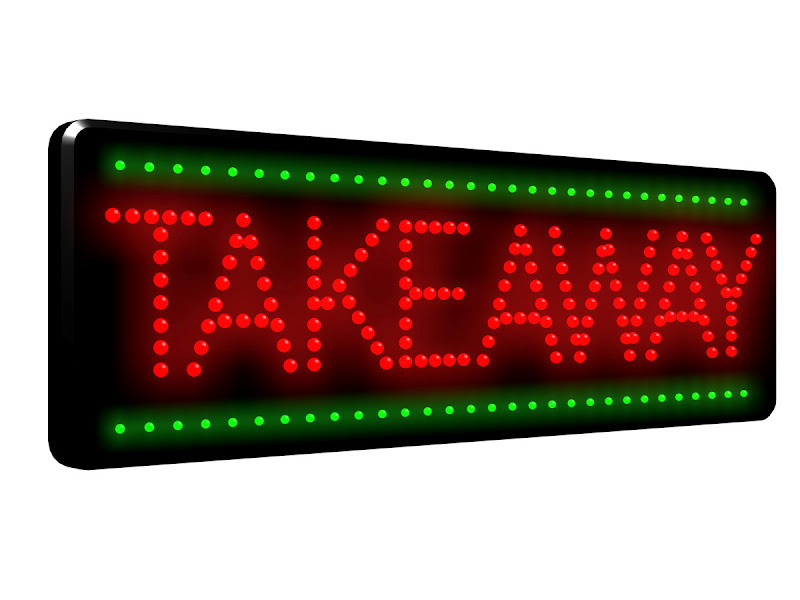 Mr P&P has “gone off” ta﻿keaways, apparently he’s decided that about halfway through eating, it all starts to taste the same…  This announcement is a real pain in the arse for me as I love a takeaway and have dedicated many years and a lot of cash to ascertaining exactly which places in Brighton have the best to offer. In my opinion these are: 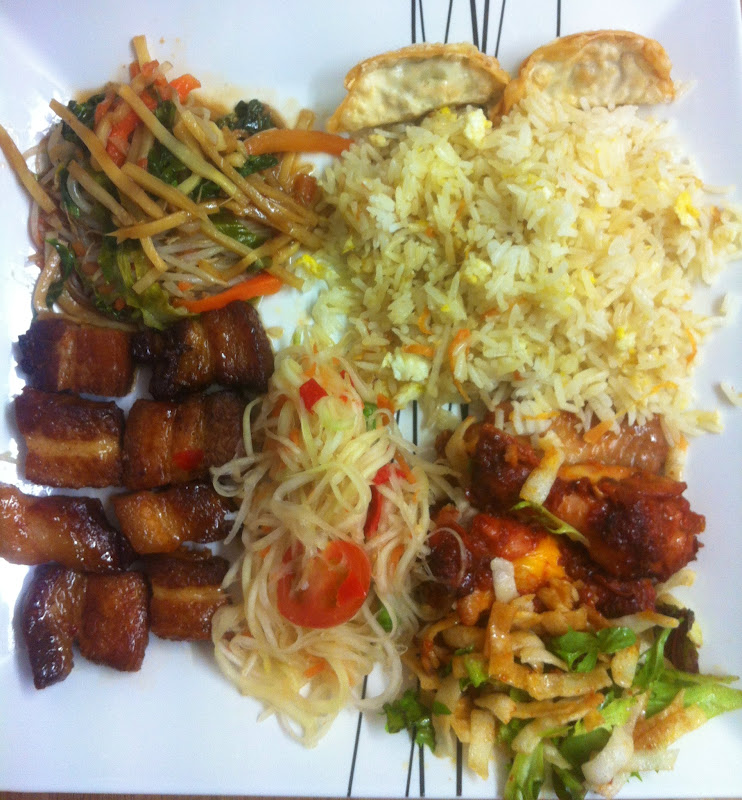 They deliver for free within 2 miles of the shop

Eversince the menu for this landed on my doorstep I’d been gagging to try it out.  The food is split into different regions with standard dishes such as pad Thai, rice etc at the end.  You can see the menu on their website. My friend Lauren and I shared the following dishes:

Belly of
pork marinated in our blend of spices, slow cooked then crispy fried,
served on a bed of mixed greens & sweet chilli
glaze 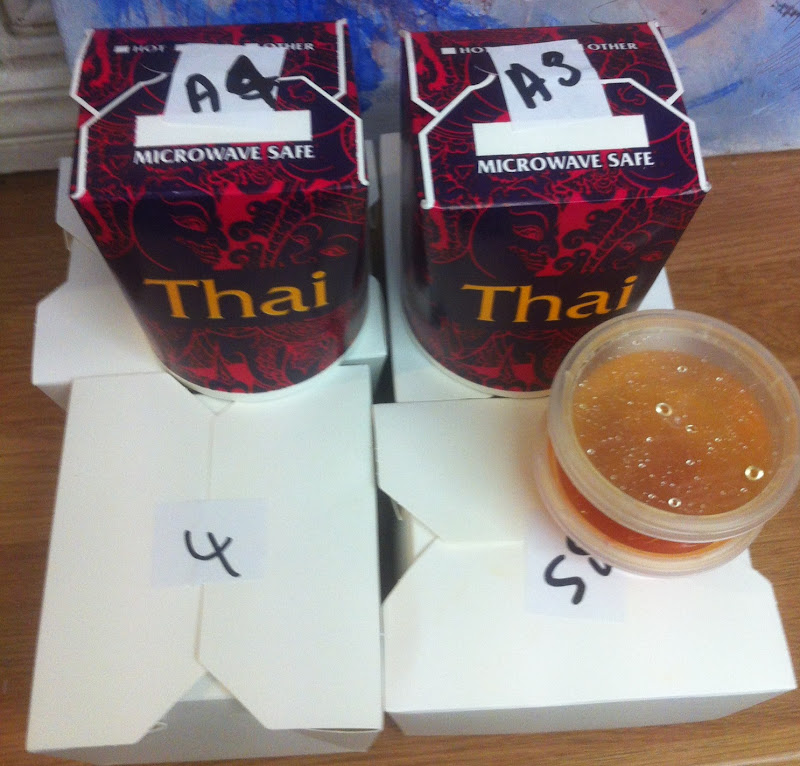 It arrived 30 minutes after ordering (they said 40 minutes max) and I was pathetically excited to see it was in cartons!! Like in America!! I have always wanted to eat “takeout” food from a carton like they do in the movies, surely I can’t be the only saddo there that feels like that?!

All of it was yummy, the vegetables and salad that accompanied the dishes were crisp and fresh and none of it was overly salty like a lot of Asian food can be.  If I had to criticise it I would say that the pork belly didn’t live up to its claim of being crispy, but it really didn’t matter, and, I got to eat out a carton like in the movies!  The portions were the perfect size in my opinion, substantial but not the enormous kind that leaves you with a slightly dirty feeling after you’ve cleared your plate.  They don’t do a meal deal which I think is a bit of a shame but other than that I have zero complaints and will definitely be visiting again. 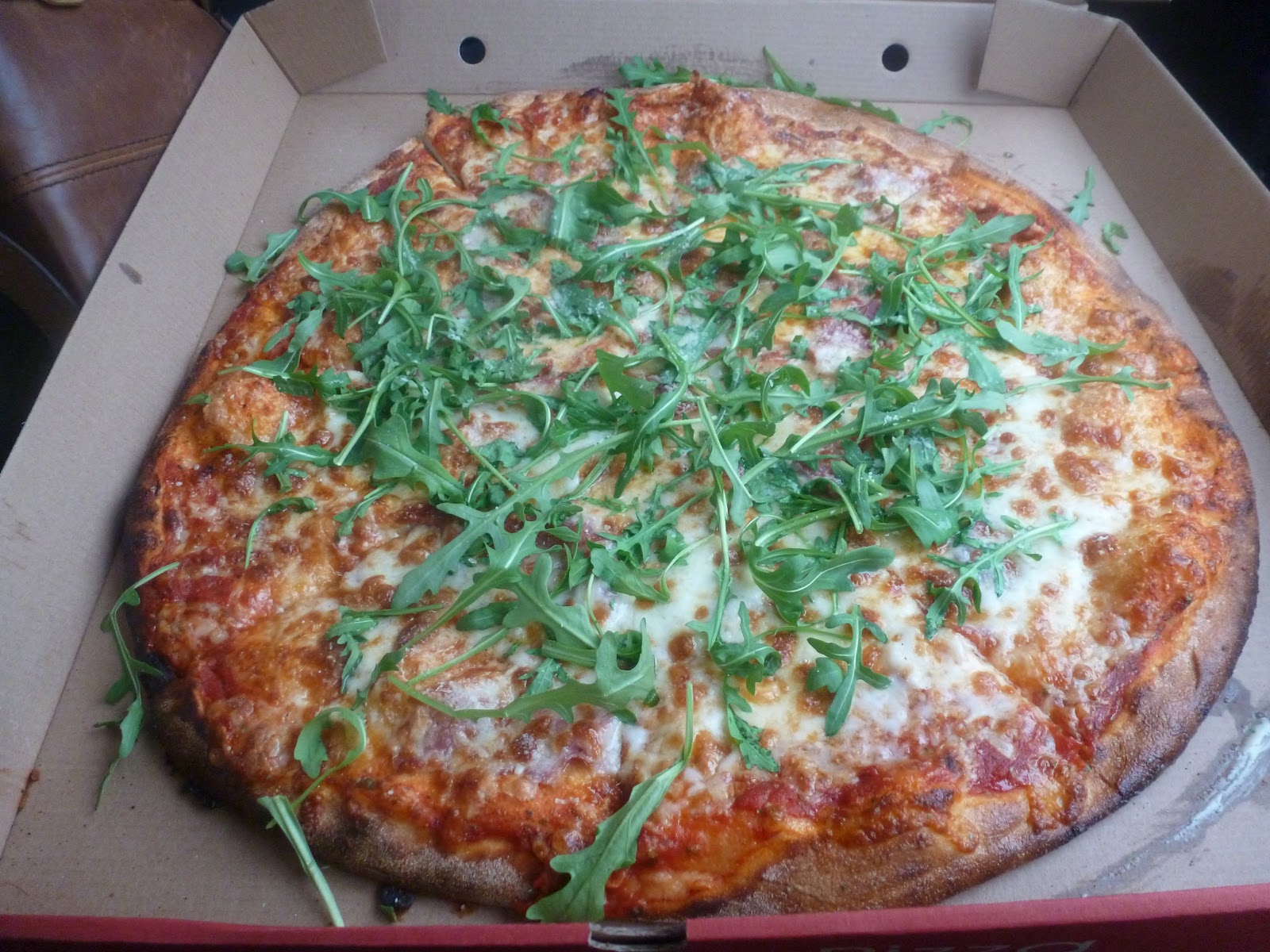 Now firstly I have to confess the pizza pictured above was a freebie… due to the fact that the last pizza I had from there had an extra topping of three large pieces of plastic!  In their defence, we rang them as soon as it happened and they offered to send a replacement immediately or give us a free pizza the next time we ordered so we opted for the latter.

The original order was for a “party feast” which includes any Super size pizza from the menu, stuffed potato skins, garlic bread, large bottle of drink and a dessert- all for £16.90 which I think is brilliant value, especially given the quality and varied menu.

The pizza above is a proscuitto crudo: tomato base, mozzarella cheese, proscuitto, rocket and shaved parmesan.  It is very remniscent of a Pizza Express pizza and actually, just as tasty.

The garlic bread is 4 slices of standard garlic baguette, nothing to rave about but fine, totally edible. The potato skins are what lets it down a bit, they’re dry, don’t have enough cheese and don’t come with a dip so make sure you have condiments to hand if you don’t want to pay extra for sauces. The dessert selection isn’t huge so I paid an extra quid for a pizza base smeared in nutella and hazelnuts which I then covered in squirty cream. I did take a picture of it but it seems to have disappeared from my phone.

In terms of value and quality combined I don’t think Oreganos can be bested… Pizza face is apparently amazing but fairly pricey, only has one size of pizza and currently doesn’t offer any sort of meal deal.

Since posting this there has been an enormous outcry in my Twitter feed from people saying that La Cucina is in fact the best pizza in Brighton.  I DO really like La Cucina, but it is considerably more expensive.  A couple of others that have been mentioned are Paul’s Pizza and Pronto in Tavola… I trust all of these peoples’ opinions but in order to decide we are going to have a to have a massive “pizza off”- I will report back as soon as this market research has taken place.

I‘d just like to state now though I did say that for quality and value combined I believe Oreganos can’t be bested. 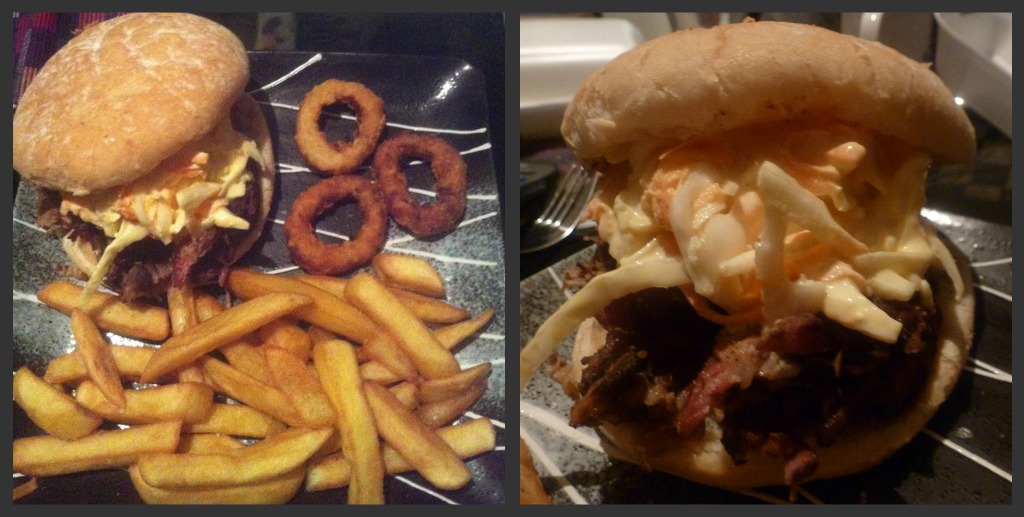 BBQ Shack began from a tiny little building near the viaduct but as it’s popularity increased it started operating from The Albert pub- this didn’t work out for them so they moved to the World’s End pub on London Road.  The latter move wasn’t hugely popular given that the pub and its location are arguably among the grottiest in Brighton…  Nevertheless it’s popularity and notoriety continued to grow and they have now opened a second kitchen at The Globe pub in the South Lanes, where they serve a slightly paired down version of the menu available at The World’s end.  They also serve what I’ve heard to be lovely roasts.

The above photo isn’t the best advert for the delights that BBQ Shack is capable of churning out.  We ordered the above takeaway from The Globe at 8:30 on a busy Friday night when they were due to shut the kitchen in 30 minutes. Mr P&P rang through to order it and went to pick it up… he came back red faced and indignant with rage due to the service he’d received throughout (and he is far less particular about this sort of thing than I am)  and was even more enraged when he saw the portion sizes* (pictured above)

Anyway I shan’t dwell on the negatives because this is meant to be a positive review!  I would highly recommend the pulled pork sandwich (above) the rib sandwich and also the beef brisket sandwich too.  Other than the above picture the portion sizes have always been incredibly generous… and if you are a regular reader of this blog you will know I am INCREDIBLY greedy!  Their own recipe of BBQ sauce is to die for, so popular that they used to sell bottles of it (not sure if they still do).

Although the photo and some of my comments don’t really back up my stating that this is one of the best takeaways in Brighton, out of about 7 meals from here this is the only one that I have anything bad to say about.  I actually tweeted the owner a photo of the meagre portion size and he got in touch straight away offering to send me a voucher and listing his phone number so I could call and discuss the issues in more detail- you can’t ask for more than that.  The pulled pork sandwich is £6.45 and a portion of chips and (3) onion rings is an additional £2.50.

There are numerous other reviews which rave about this place (and are probably a far better representation of what they’re capable of) here.

They DO NOT deliver.  After a lot of negativity on Facebook re their delivery service, the increased cost of petrol and various other reasons  the owner John has withdrawn this option.  Forever.  I personally used the delivery service on many occasions and never had any problems at all. 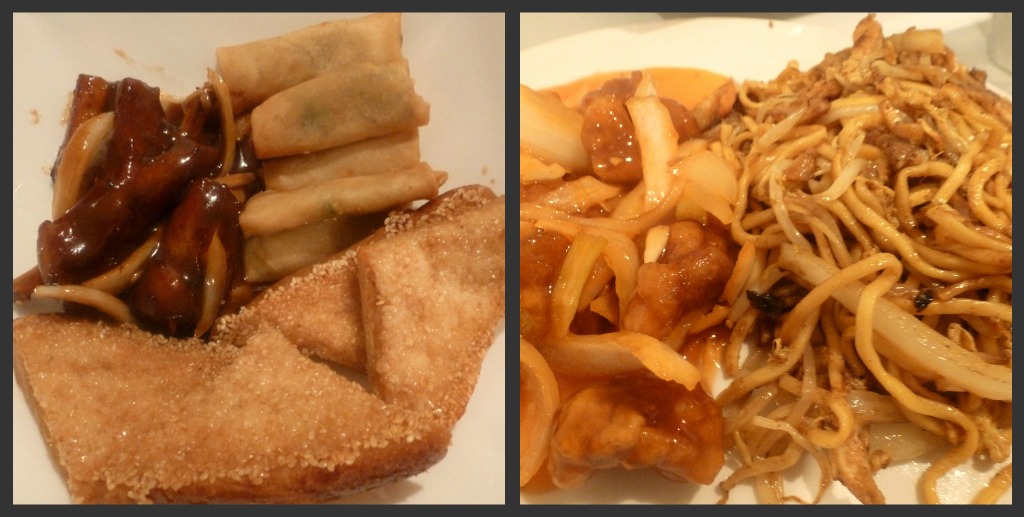 No website and only out of date menus elsewhere online.

I discovered this little gem on the stagger home from an all day drinking sesh… but please don’t let this cloud your judgement!  Mr P&P, who doesn’t even like Chinese food (annoying) demolished the remains when sober and said it was delicious.

The honey chilli pork tasted of exactly that, no overwhelming MSG flavour (although you can tell from the colour it almost certainly contains some) and the batter surrounding the meat had rather cleverly remained crispy despite being liberally covered with the sauce.  Again, for the price tag, £4.50, I was massively impressed.

The noodles were supposed to be singapore chow mein…. I don’t think they were, I think they were chicken chow mein, but either way they were really nice and the vegetables within it were still crunchy rather than the usual, flaccid and slimy ones you usually get in noodle dishes like this.  It was a massive portion, particularly given that it only cost £4.

They deliver for free within 3 miles on orders over £10. There is a £1 delivery charge for over 3 miles.

*I’m not sure why, but the spacing on this part of the post seems to have gone mental and I can’t sort it out, REALLY BLOODY ANNOYING* 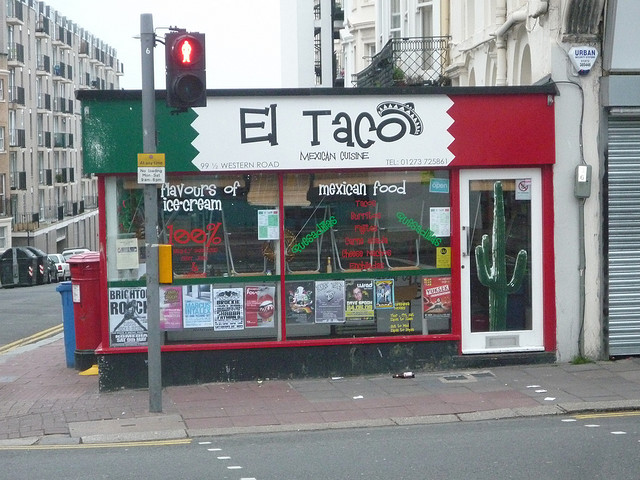 There
is a Mexican takeaway on Western Road called El Taco which is OK.. but
only OK, they make no secret at all of the fact that everything is
microwaved but I believe it’s the only place that does Takeaway Mexican
food, if I’m wrong then PLEASE comment below because I would love to try
an alternative! 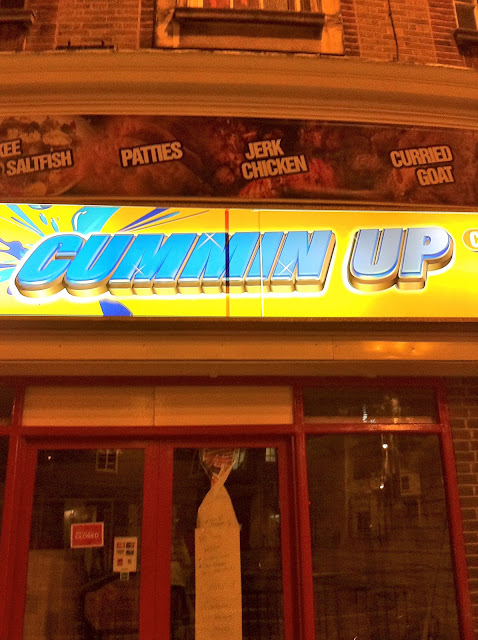 I went to give it another go last week but walked straight back
out again, the whole place stank of dirty cooking oil and it just looked
a bit… skanky.  The Bain-maries
where some of the food is kept on display were empty other than bits of
bone and rice floating about in the remaining water- I just found it
incredibly off-putting.

So there you have it, my opinion on Brighton takeaways.  Is anyone wildly opposed to my choices?  Does anyone think I am missing out on somewhere spectacular?  If so, please comment below as I am always up for trying somewhere new.