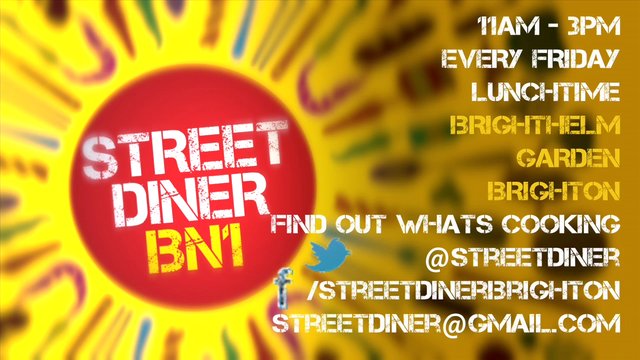 If you’re visiting , live or work in Brighton then I have the PERFECT place for your Friday lunchtime blowout- Street Diner, Brighton’s very first street food market.

In the garden of the Brighthelm centre (which every other day of the week looks far less desirable, Brighton residents will understand) this foodie extravaganza can be found every Friday come rain or shine.  With a number of stalls who are permanent fixtures and a regular switch up of guest traders, most of whom seem to be local businesses, there really is something for everyone… even vegans.

As you’ll see from below I am a huge fan. Despite being immensely greedy, all the food pictured was consumed over a number of visits and (mostly) shared between two, promise 😉 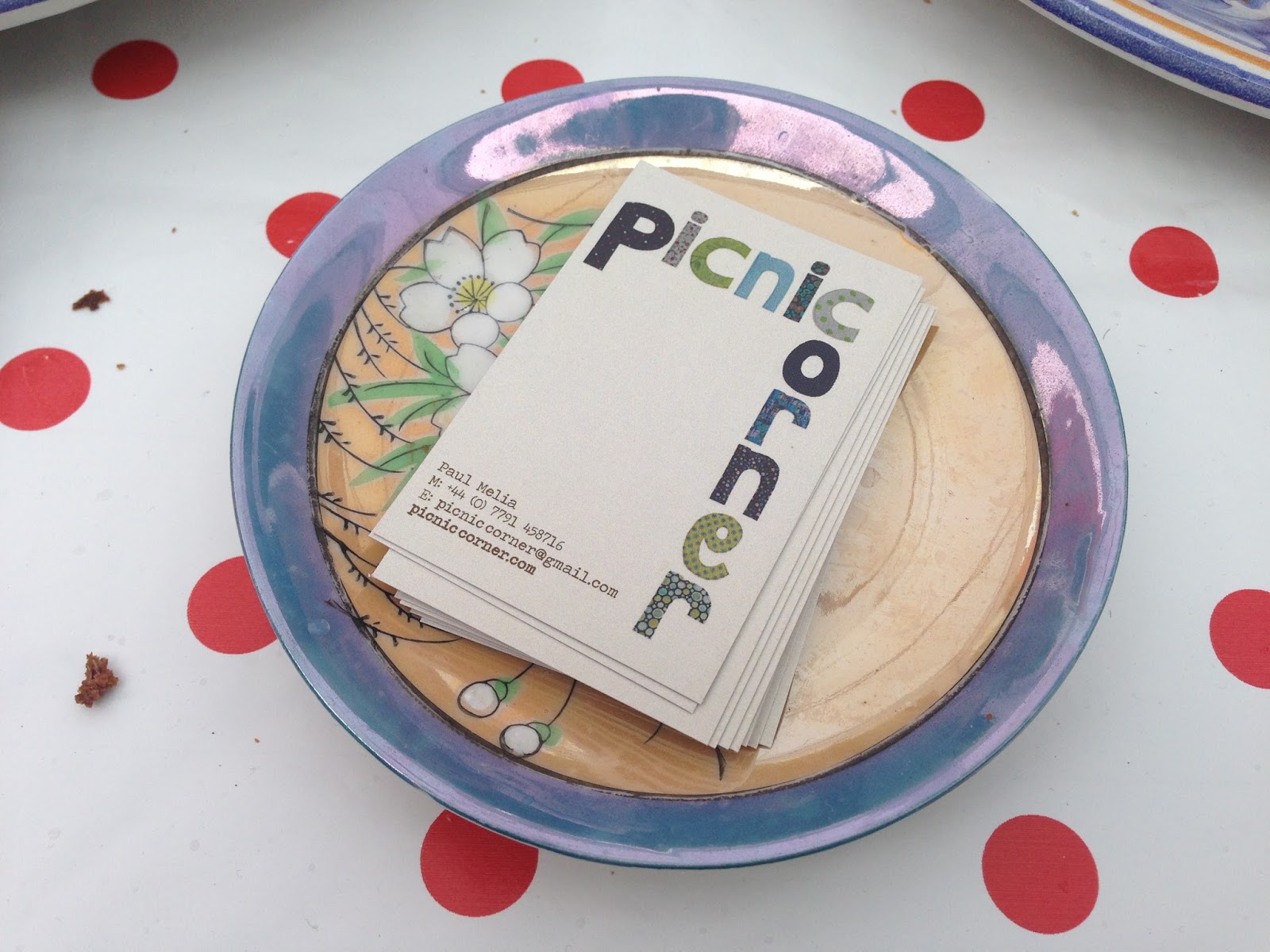 I think of the six visits I’ve made to Street Diner I’ve visited Paul from picnic corner at least four or five times.  His Scotch eggs are to die for and he’s a very nice chap indeed.

He soft boils duck eggs, encases them in a variety of different flavoured sausage meat, then breadcrumbs, before baking them in the oven. 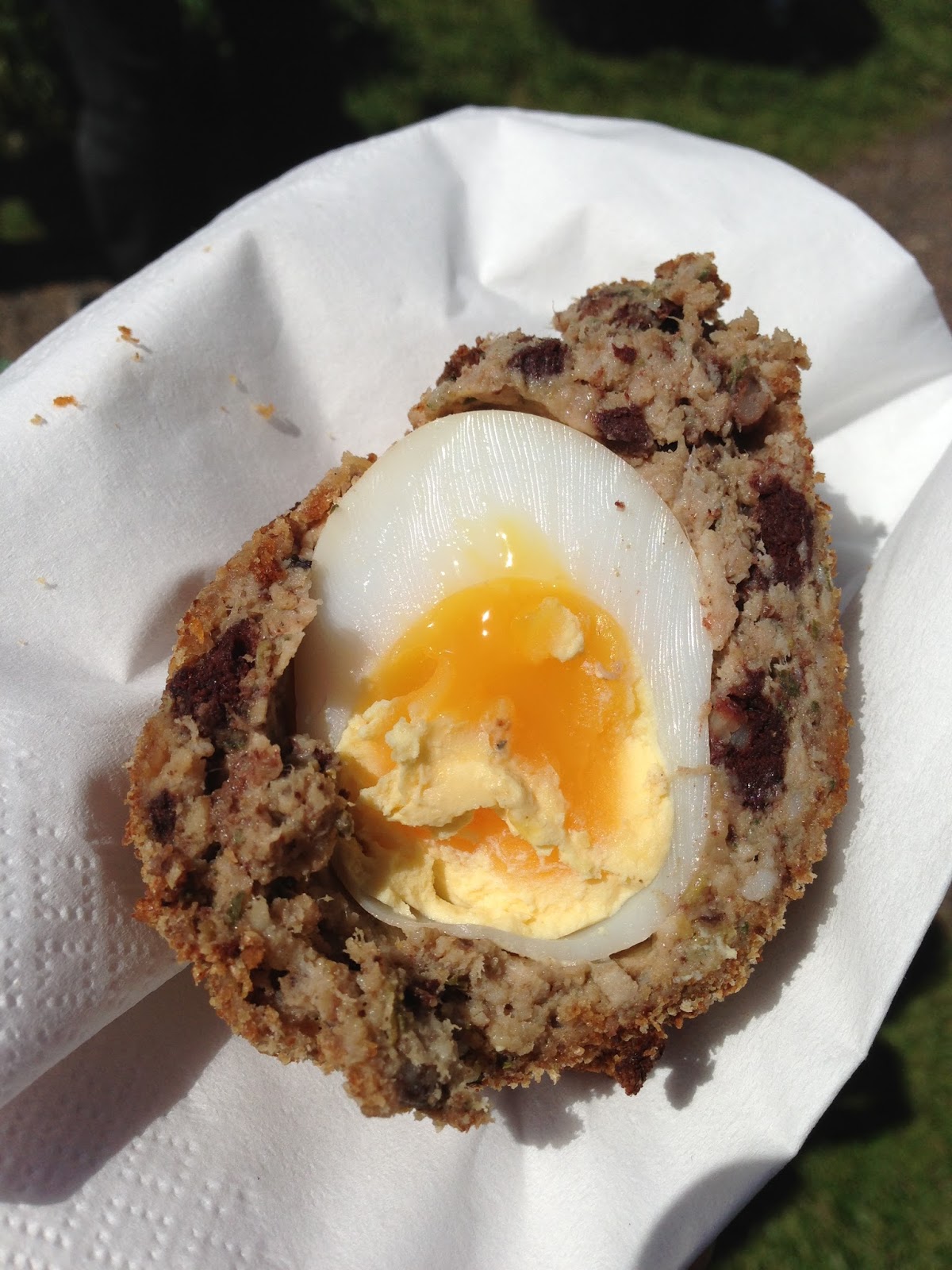 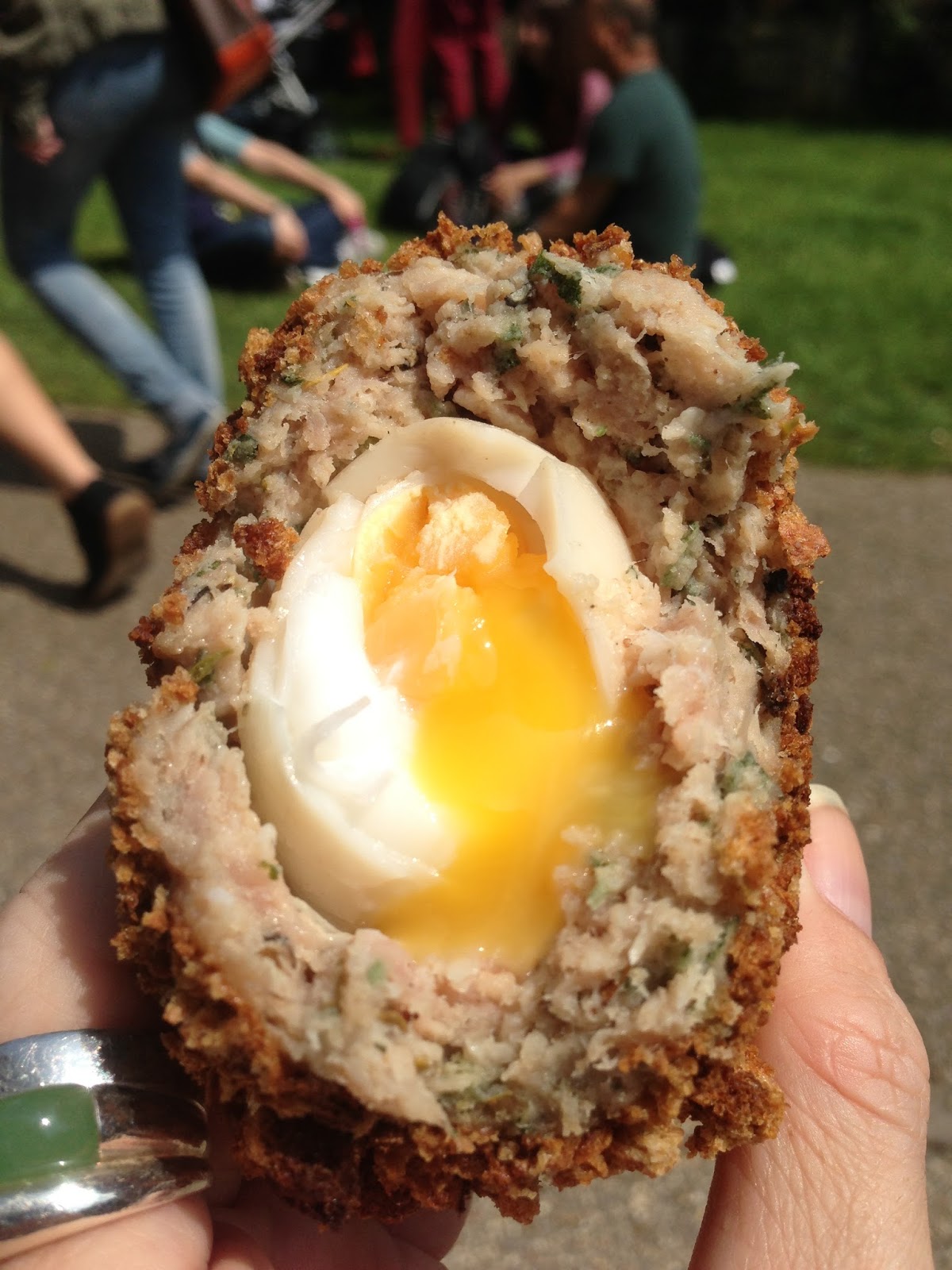 Just LOOK at those yolks.  The first one is the ‘breakfast’ egg which is sausage meat and black pudding and the latter maple syrup and onion, so good.  I’m not sure it would be possible for me to visit Street Diner and not buy one now, they’re just too amazing to resist. I had a look online but I can’t see a website for picnic corner but you can find it on Facebook and Twitter too. 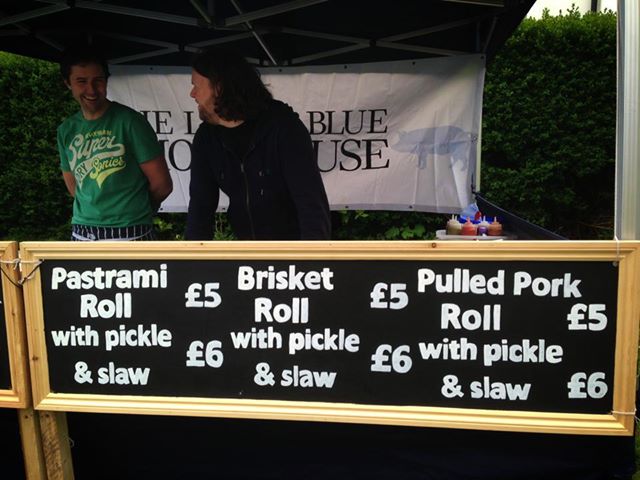 With Mr P&P being the insatiable carnivore that he is, we’ve made a few visits to the Little Blue Smokehouse over the weeks and thoroughly enjoyed everything we’ve sampled- the entire menu. 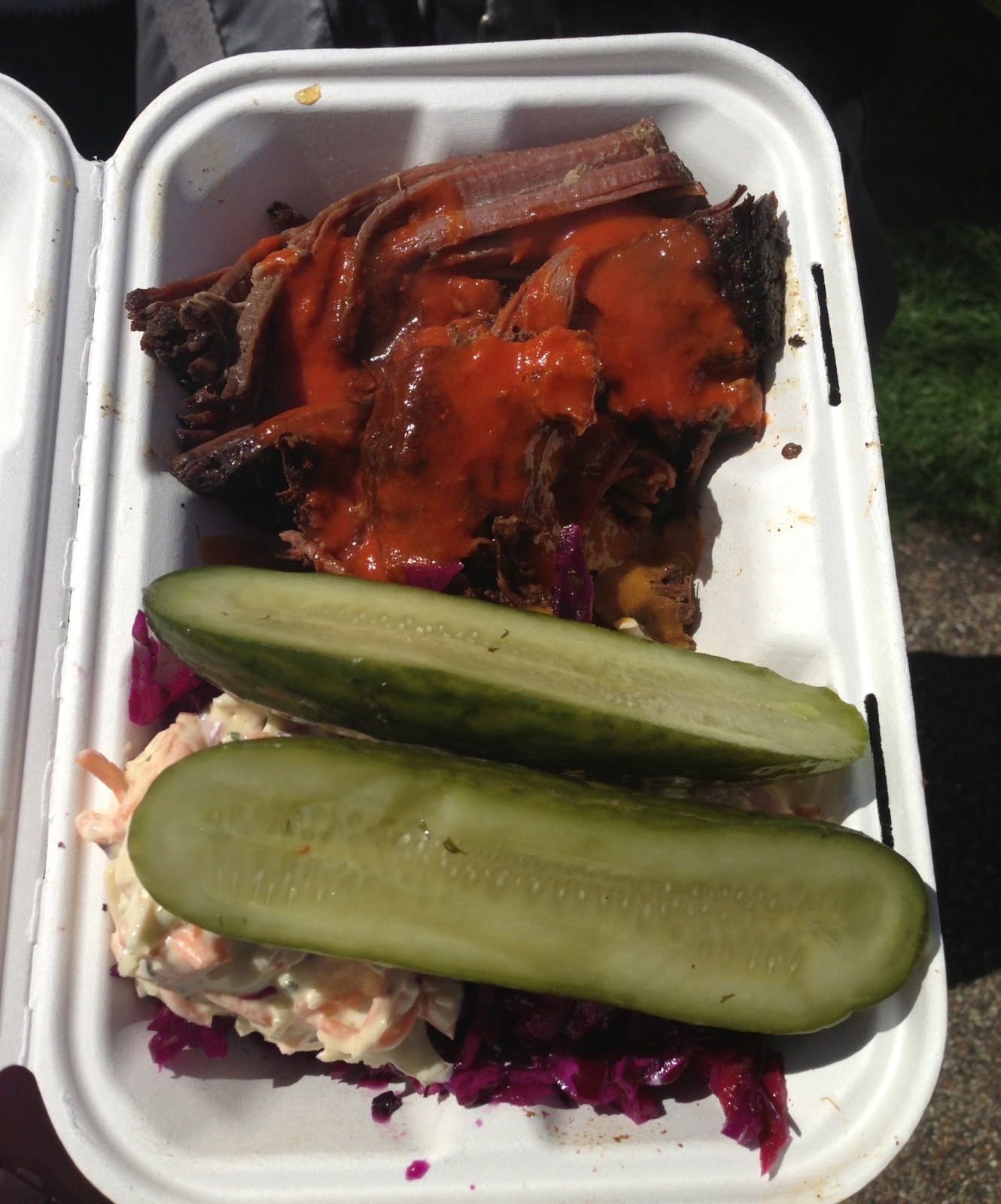 The first week we got there a bit late and they’d run out of pulled pork and baps so we settled for a mixture of brisket and pastrami with the medium hot (Mr P&P is a bit of a wuss when it comes to spice) chilli sauce. It was delicious and still extremely filling despite the lack of bun. 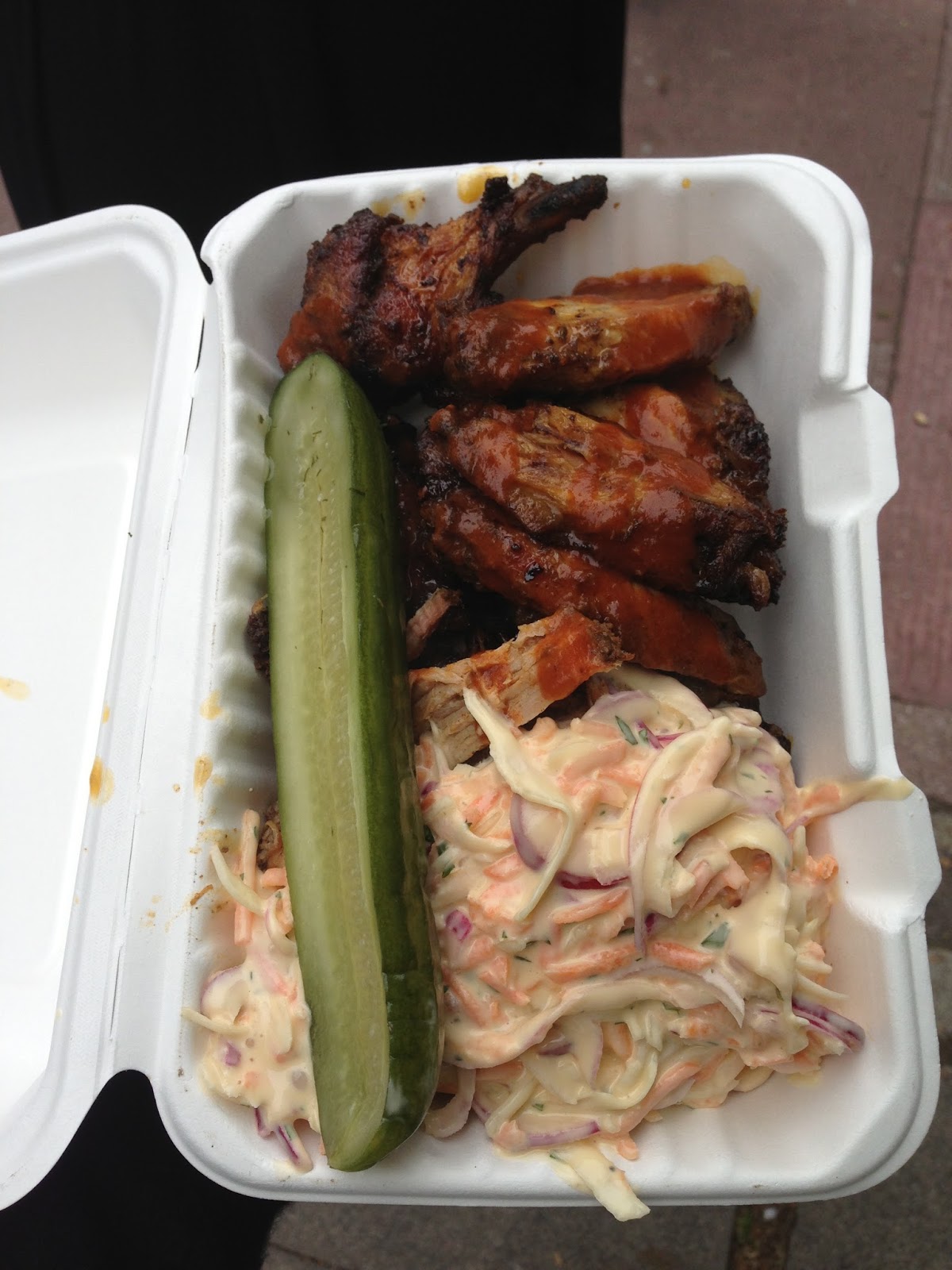 This was a takeaway I got for Mr P&P a few weeks ago, smoked chicken wings which were the special of the day and a bonus serving of pulled pork as they were about to shut up shop and were keen not to see it go to waste- legends. I didn’t actually get to sample any of the above but Mr P&P was a big fan.  I saw on their Twitter account earlier that this weeks special is smoked beef short ribs- WANT THEM IN MY FACE. 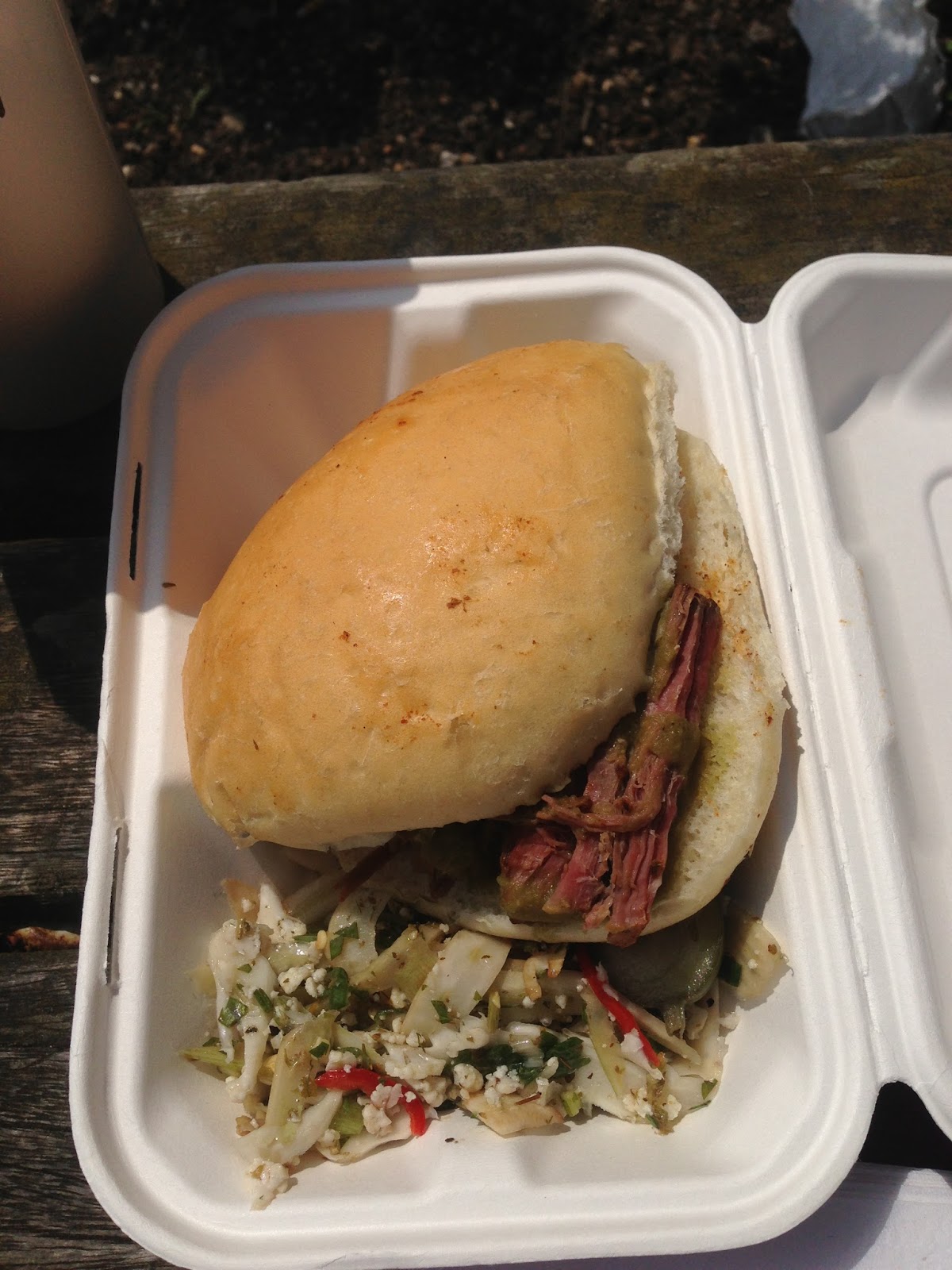 Another brisket and pastrami combo, in a bun with pickled veg on the side. 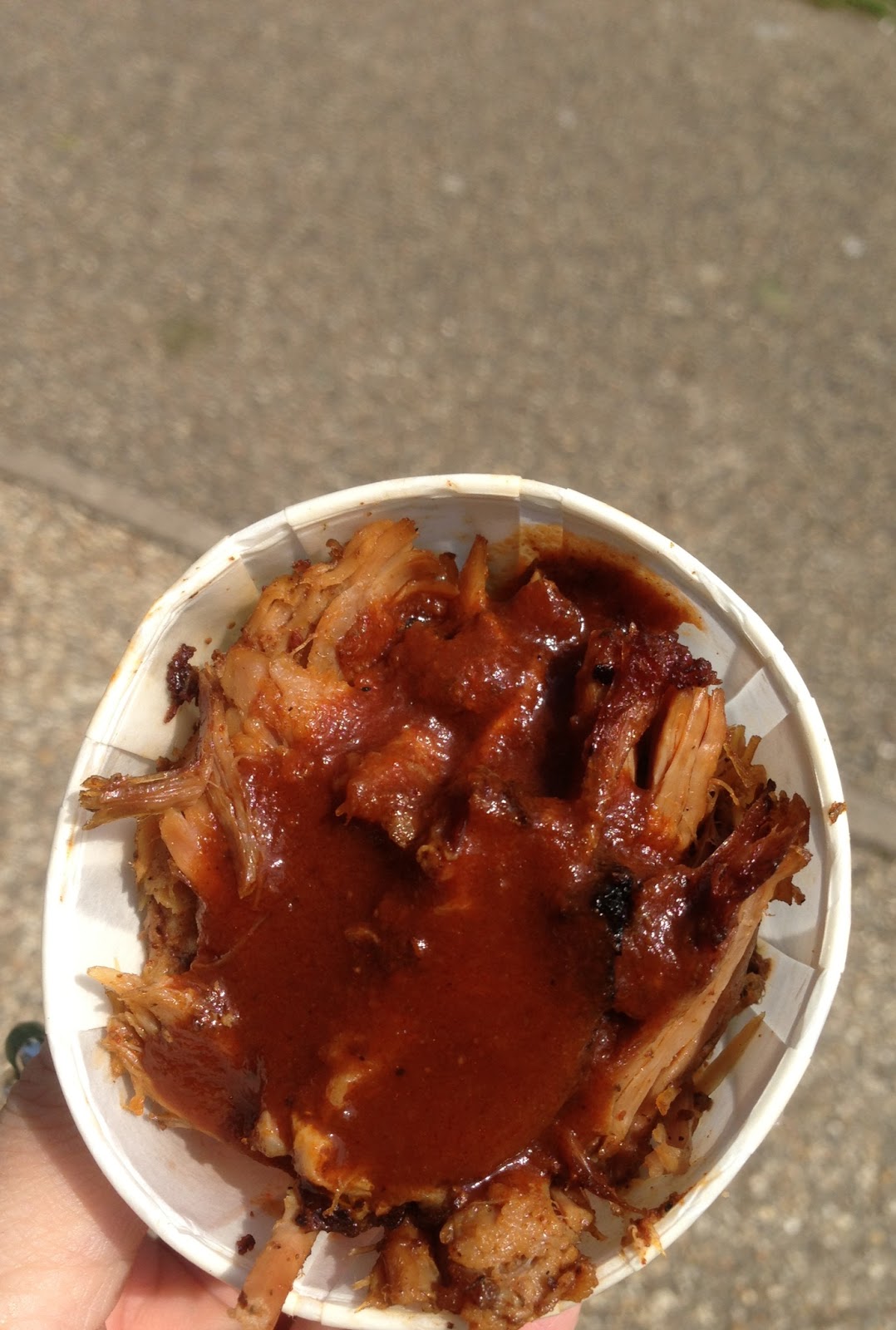 A bonus serving of pulled pork.  I think I had attempted to get the pulled pork two or three times before this occasion but they’d always sold out by the time I got down there, me being me obviously made a fuss each time (in a nice way of course), so on this occasion the lovely owner (I should have got his name) gave me the remainder of the pork for free.  Apparently he’d got through 25kg of it in 2 hours and apparently does so every single week, a testimony to how good it really is.

Aaaaah, I love this place and have seen their pop up at a few Brighton foodie events now – check out my review of their restaurant in the South Lanes, here. 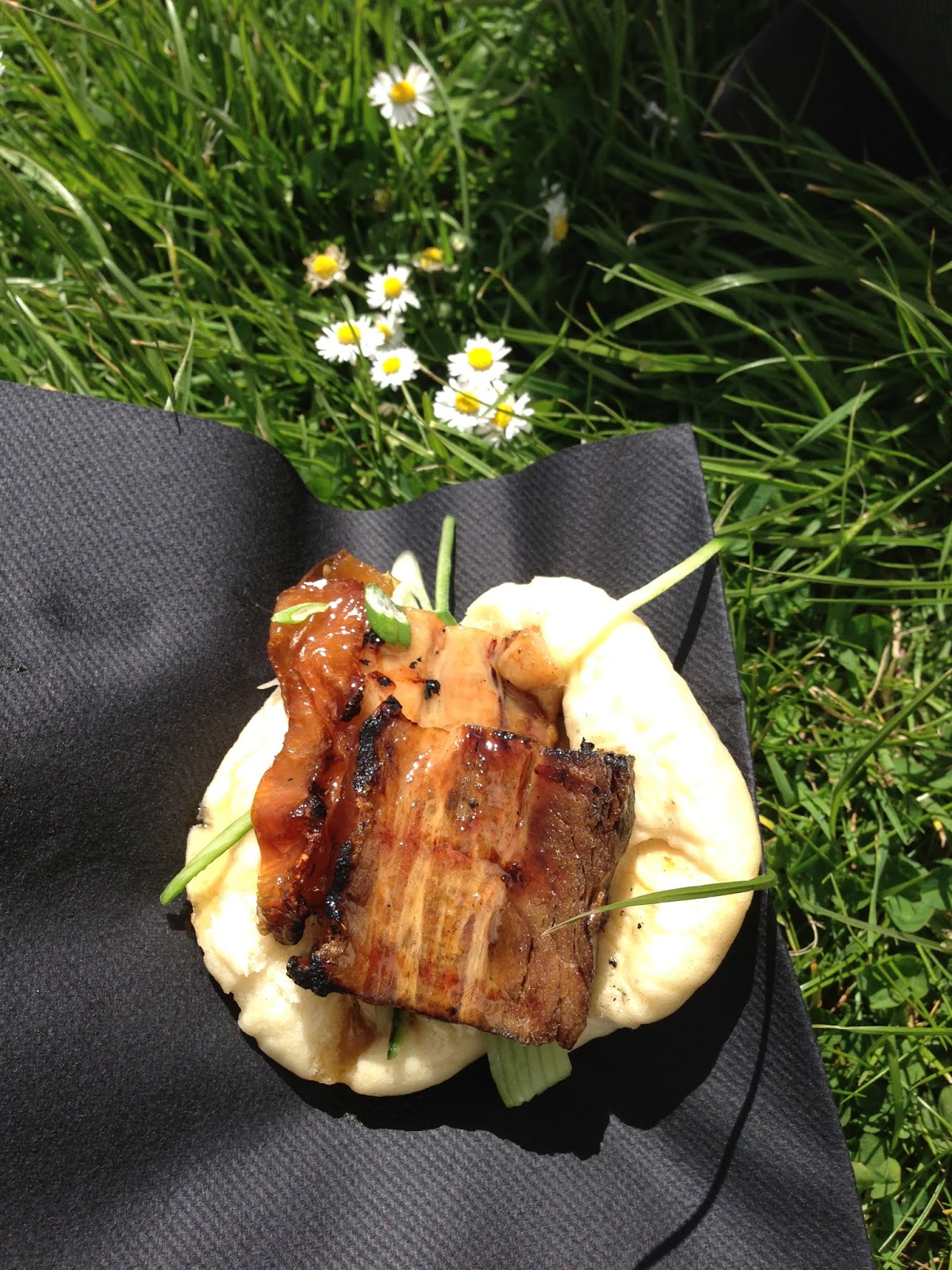 There are.no.words. to describe the wonders of these buns stuffed with porky goodness (that sounds so wrong) I can imagine the gloriousness would only be intensified by adding an oyster to the mix. 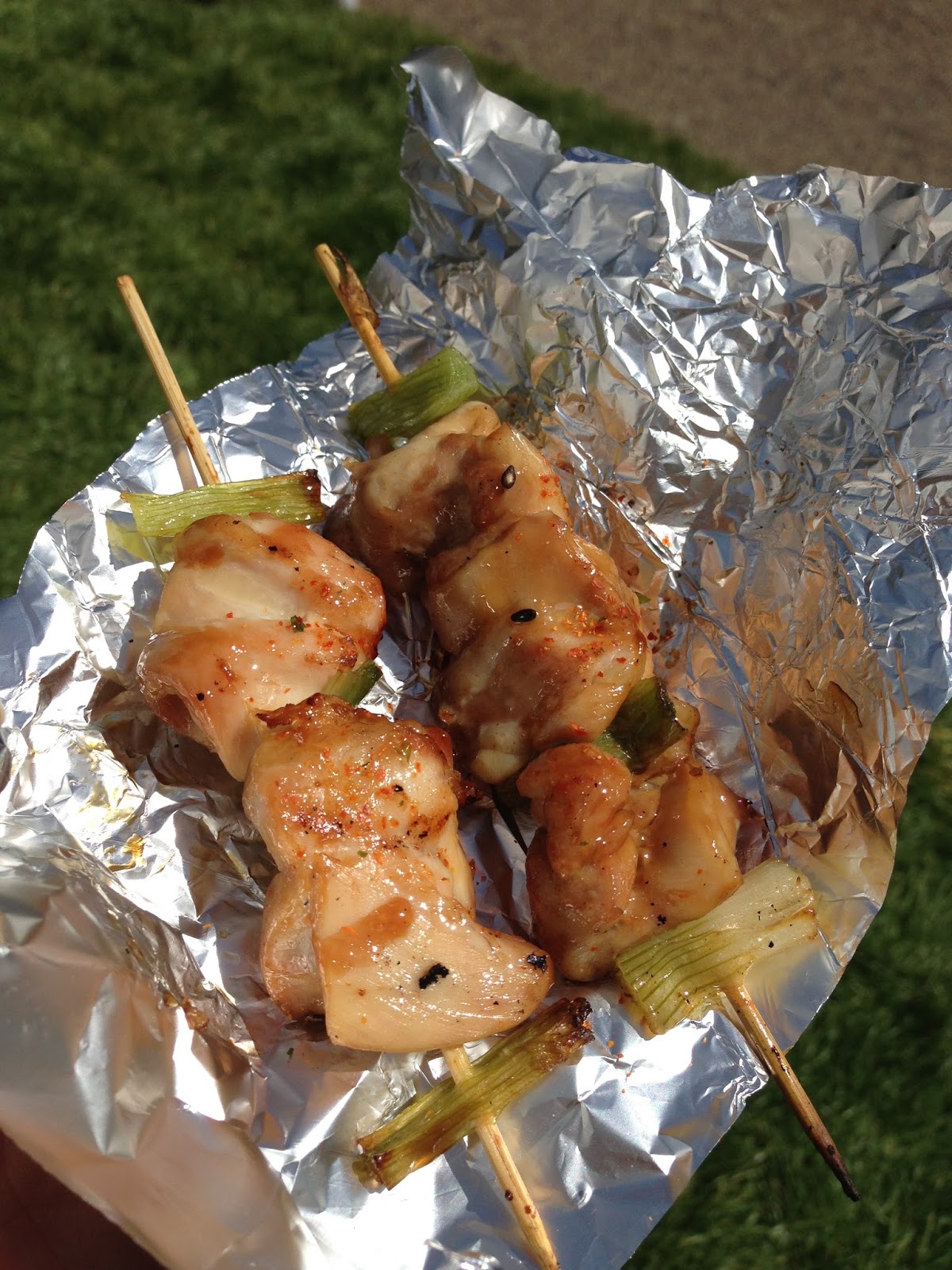 These were so delicious and given that the meat is free range I think they’re an absolute bargain at £1 a pop. 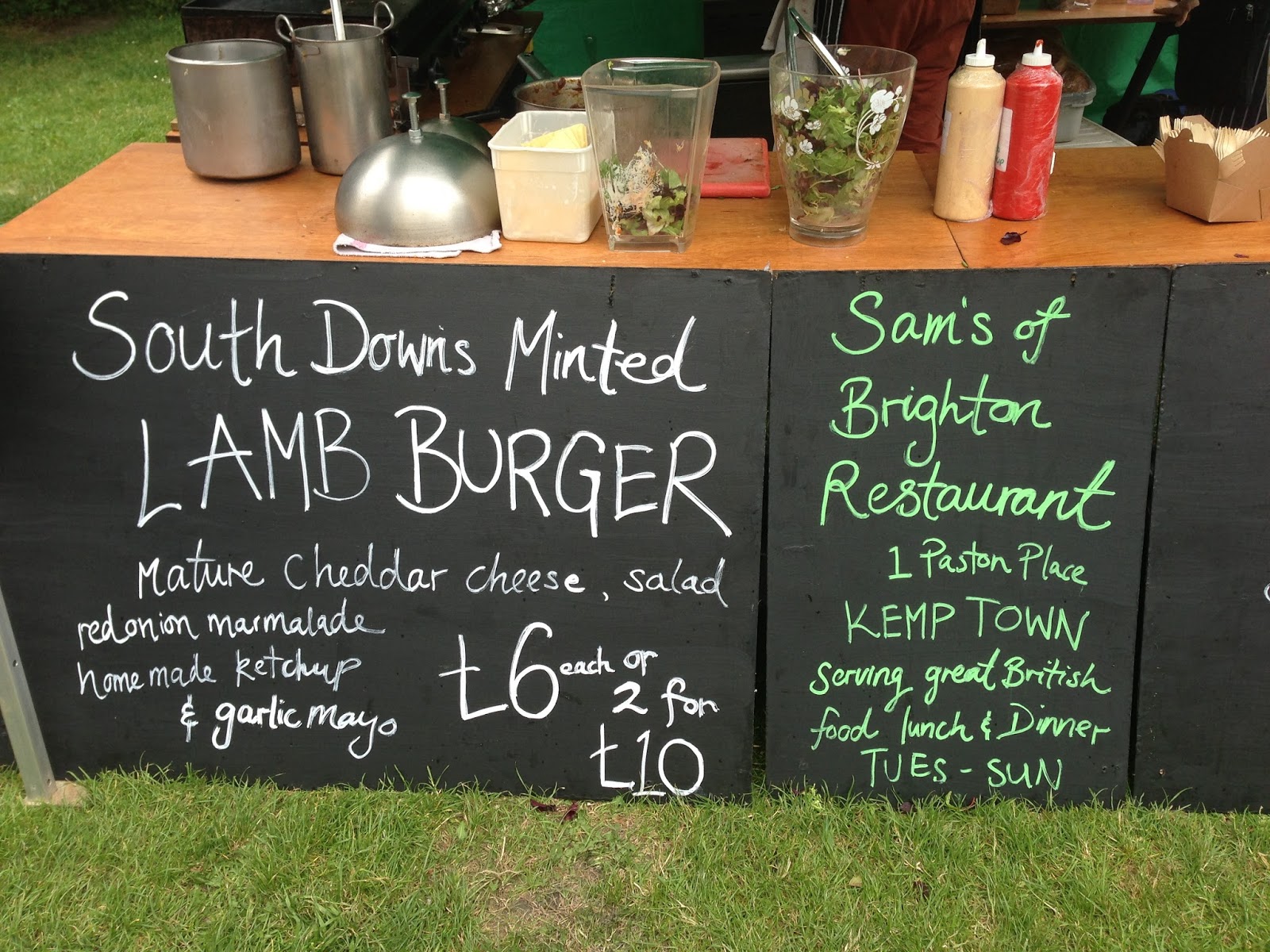 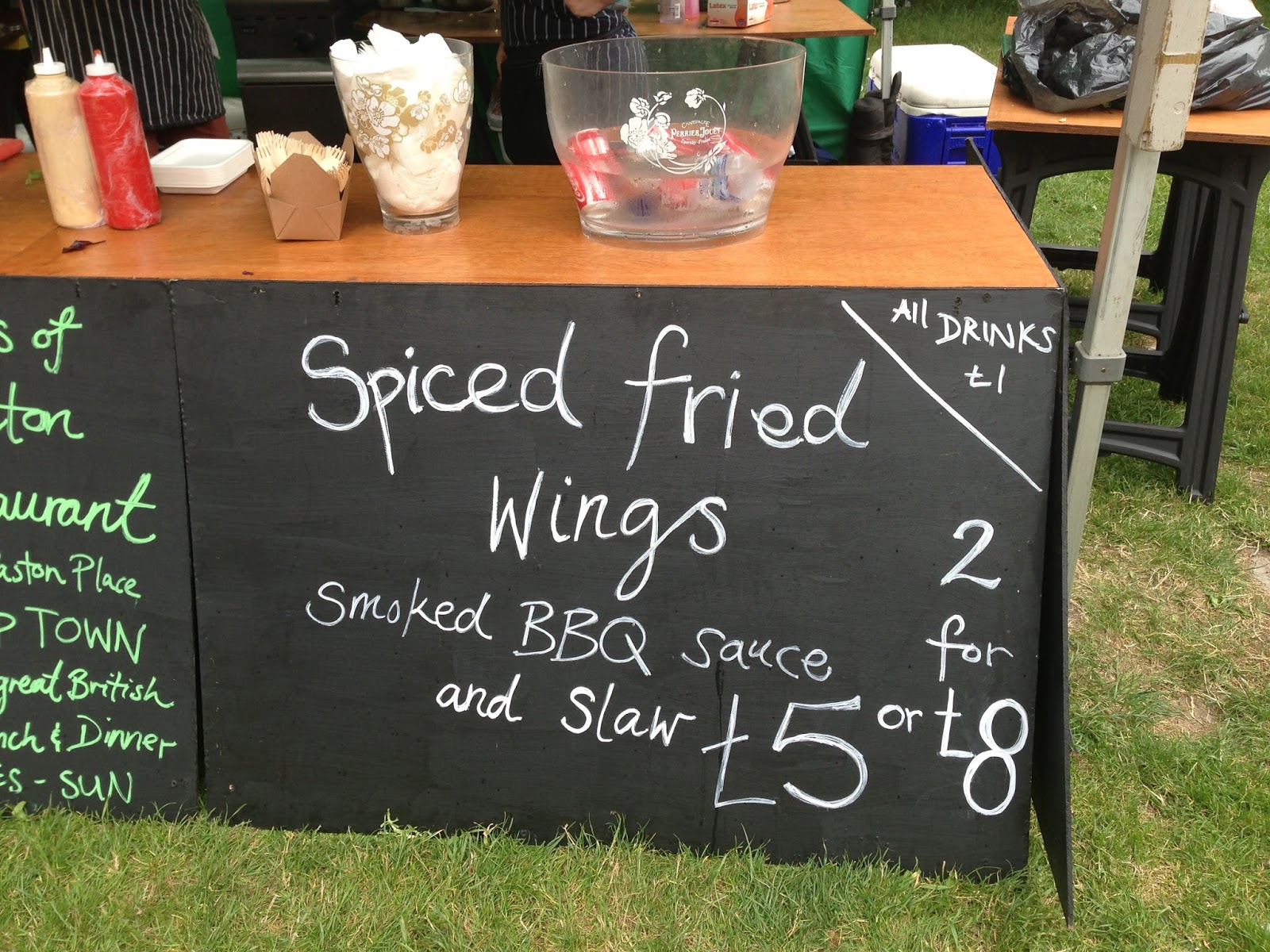 Sam’s were a visiting stall a few weeks ago, I’m unsure whether or not they’ll be a regular fixture but I do hope so as I definitely want to sample one of their lamb burgers next time! 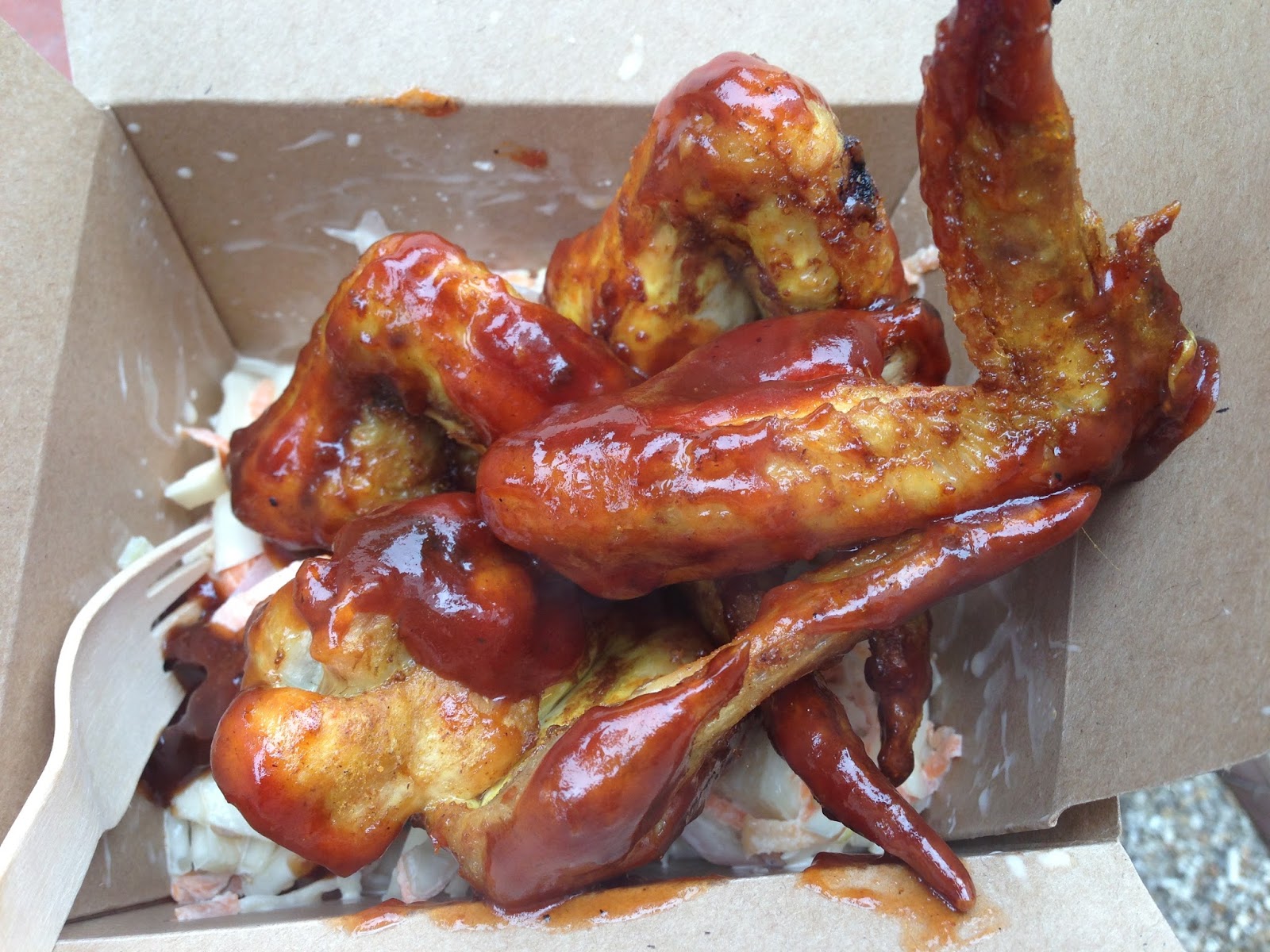 I can highly recommend the BBQ wings (I hope they’re free range but rather suspect they aren’t as people like to advertise these things) After being plunged into a deep fat fryer the skin was deliciously crisp and the sauce was sticky, smokey and extremely tasty. 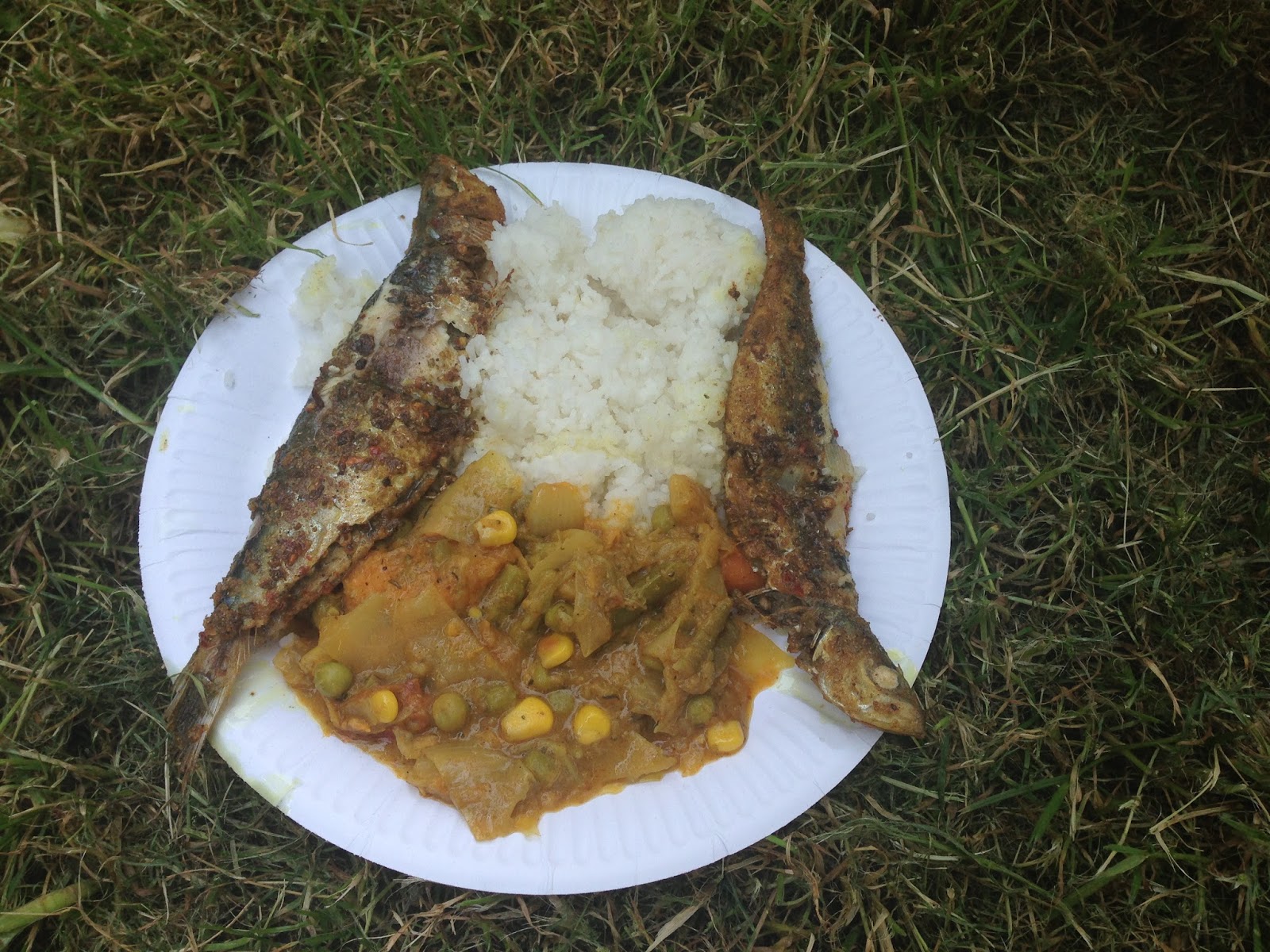 The above dish was from Taste of Grenada another guest trader at Street Diner. They offered a selection of Caribbean curries including chicken, vegetable and I think that there may have been another option too (I just can’t remember what it was).  I opted for BBQ sardines with rice and vegetable curry. It was unreal and only a fiver! The sardines were done to an absolute turn and went perfectly with the rich and fairly spicy vegetable curry- I would highly recommend . I can’t find any trace of them on any social networks, but if anyone reading knows different then please post in the comments box below and I’ll link them up. 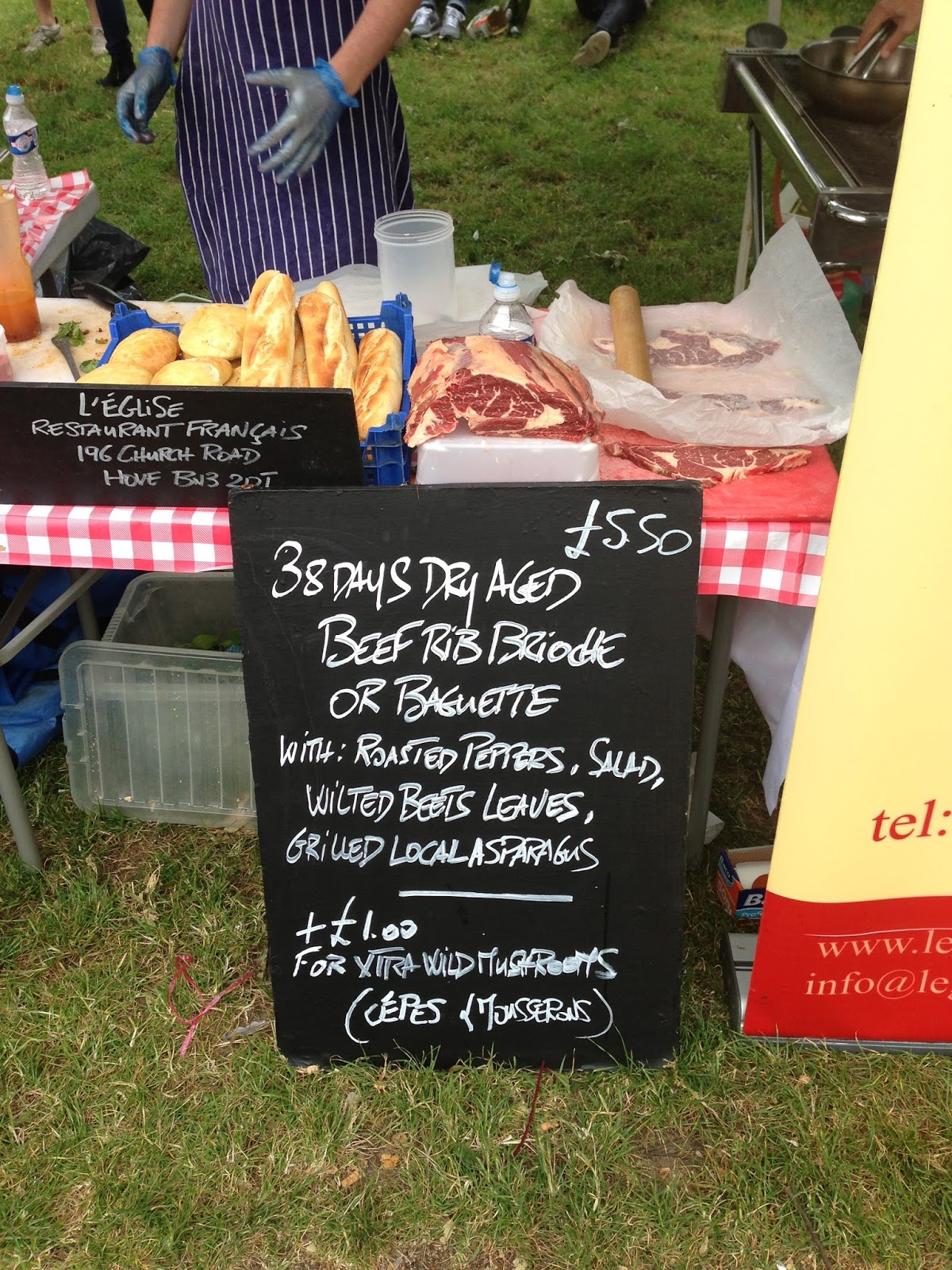 Next up is the offering from the lovely guys at L’Eglise (I can’t for love nor money work out how to do an e with an accent on a mac, someone please tell me how) restaurant in Hove, somewhere which has been high on my “to do” list for quite some time now, and the GORGEOUS baguette I had at Street Diner pushed it right to the top of said list! 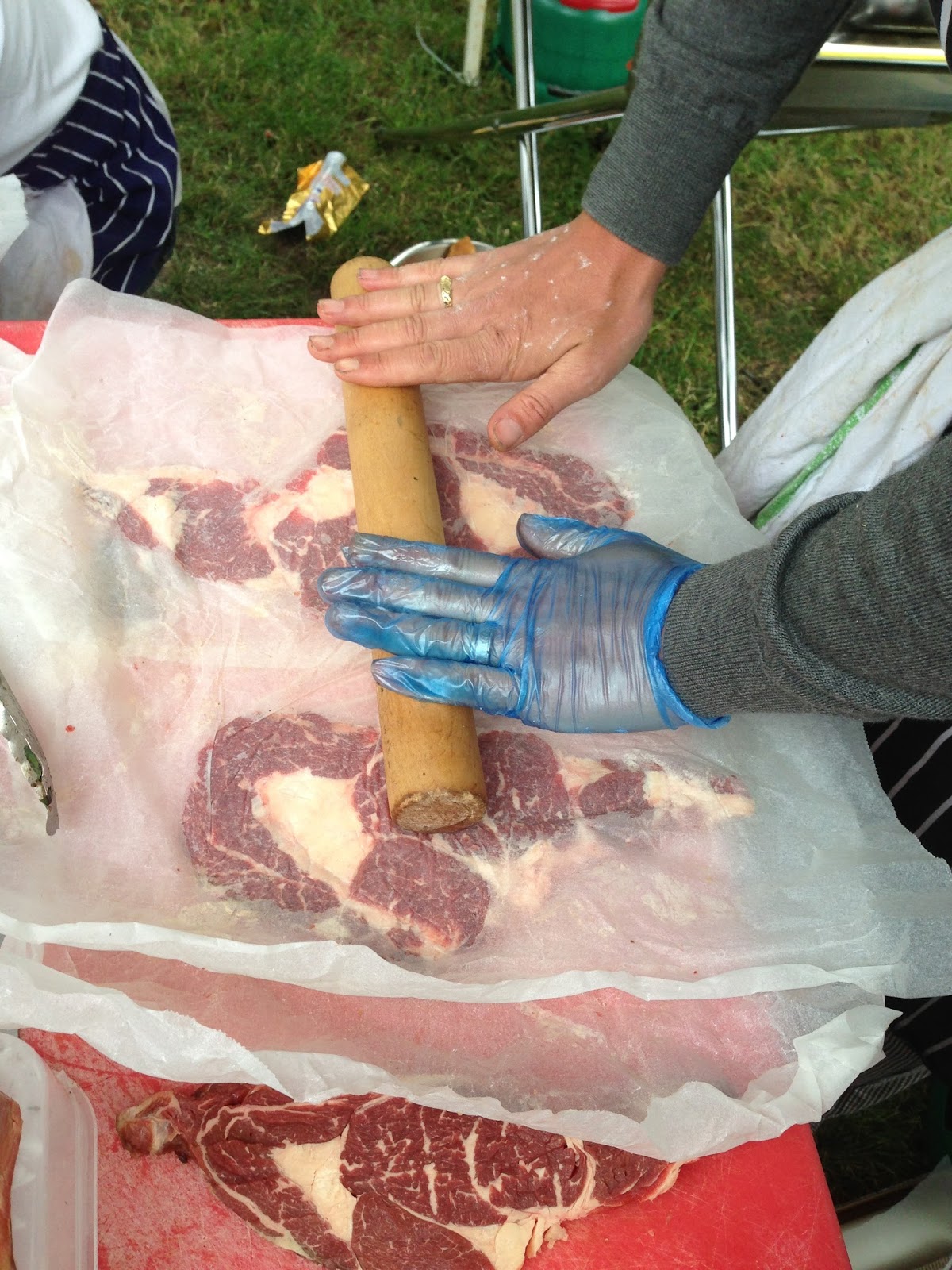 When I asked him to hold his hands still so I could take a photo, he asked me what it was for and I said my blog- he said that he was familiar with it! I’m still can’t quite believe this despite him vehemently insisting three or four times that he wasn’t just flattering me. 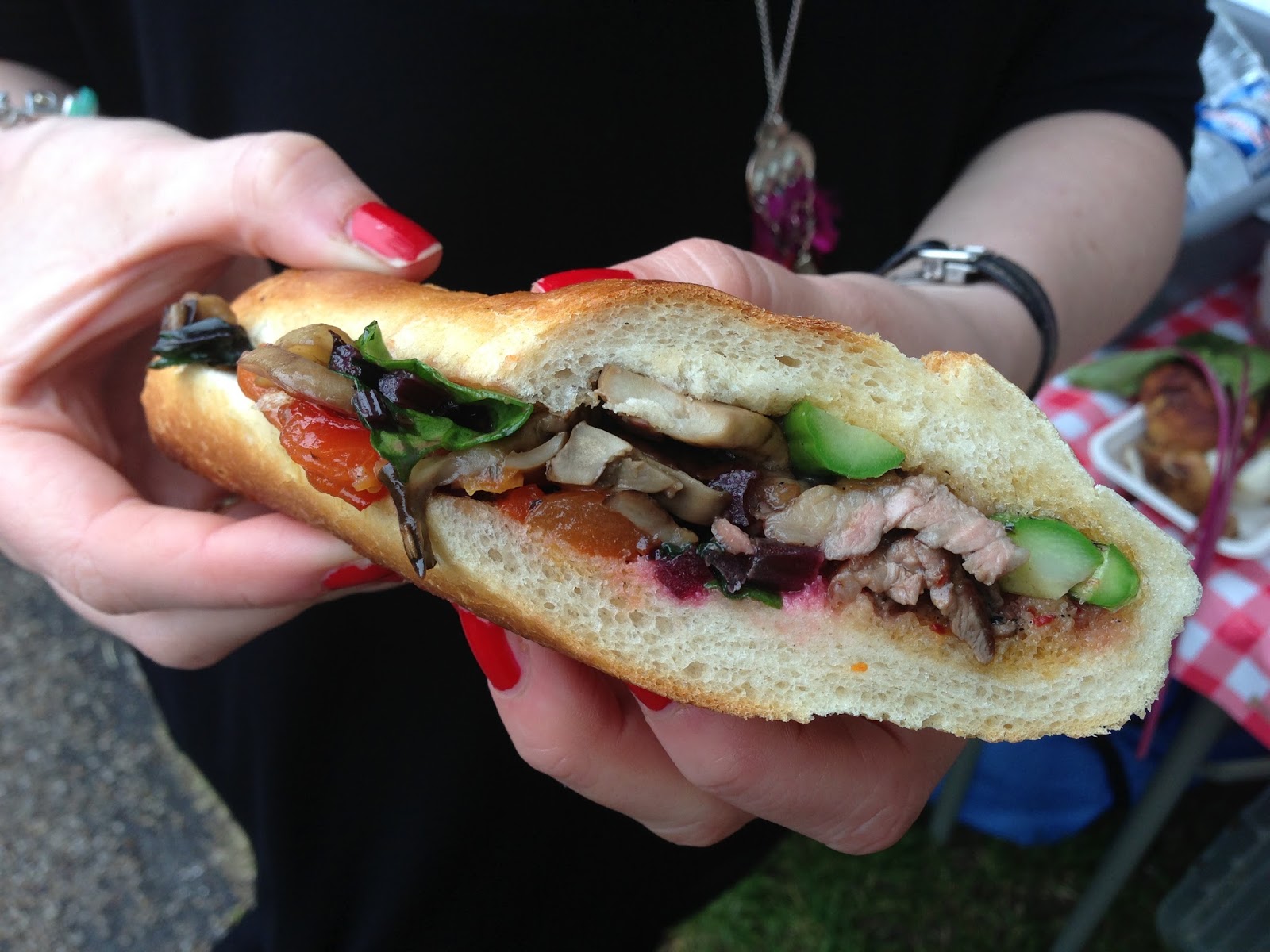 Painstakingly assembled with an extra portion of wild mushrooms and all of the extras listed above this absolute beauty was the best thing I ate at Street Diner that day and has left me champing at the bit for more ever since. I believe they switch up their menu each week, but if this was the benchmark then I insist you give them a whirl when you visit.

Some of you may recognise these guys from their fleeting presence at Churchill Square shopping centre (next to that revolting pizza/pasta stand)- I for one missed the boat on this so was delighted to see them on the lineup for the first Street Diner (and every one since).

If you want the pulled pork carnitas then showing up early is a must, I’ve tried and failed on a few occasions to get one so went with the chicken and chorizo option and very nice it was too.  Sadly this was the day that my stupid phone (iPhone battery life- BAH) died before I could snap away at my foodie purchases like a crazed paparazzi but there’s lots of photos on their website, Facebook and Twitter.

I ate from Hallo Chorizo the first week I visited, another permanent fixture at Street Diner.  Their strapline on Twitter is “From the salty goodness of halloumi to the spicy joy of chorizo, come and enjoy our hot bbq sandwiches and say Hallo Chorizo!”- which I would say just about covers my experience.  This was also the day that my phone died so sadly no photo, but I opted for the Halloumi  and chorizo ciabatta with romesco sauce which was deliciously tomatoey and nutty. If I had to level any sort of criticism at it, it would be that the ciabatta was a bit dry, but the rest of it entirely made up for it. 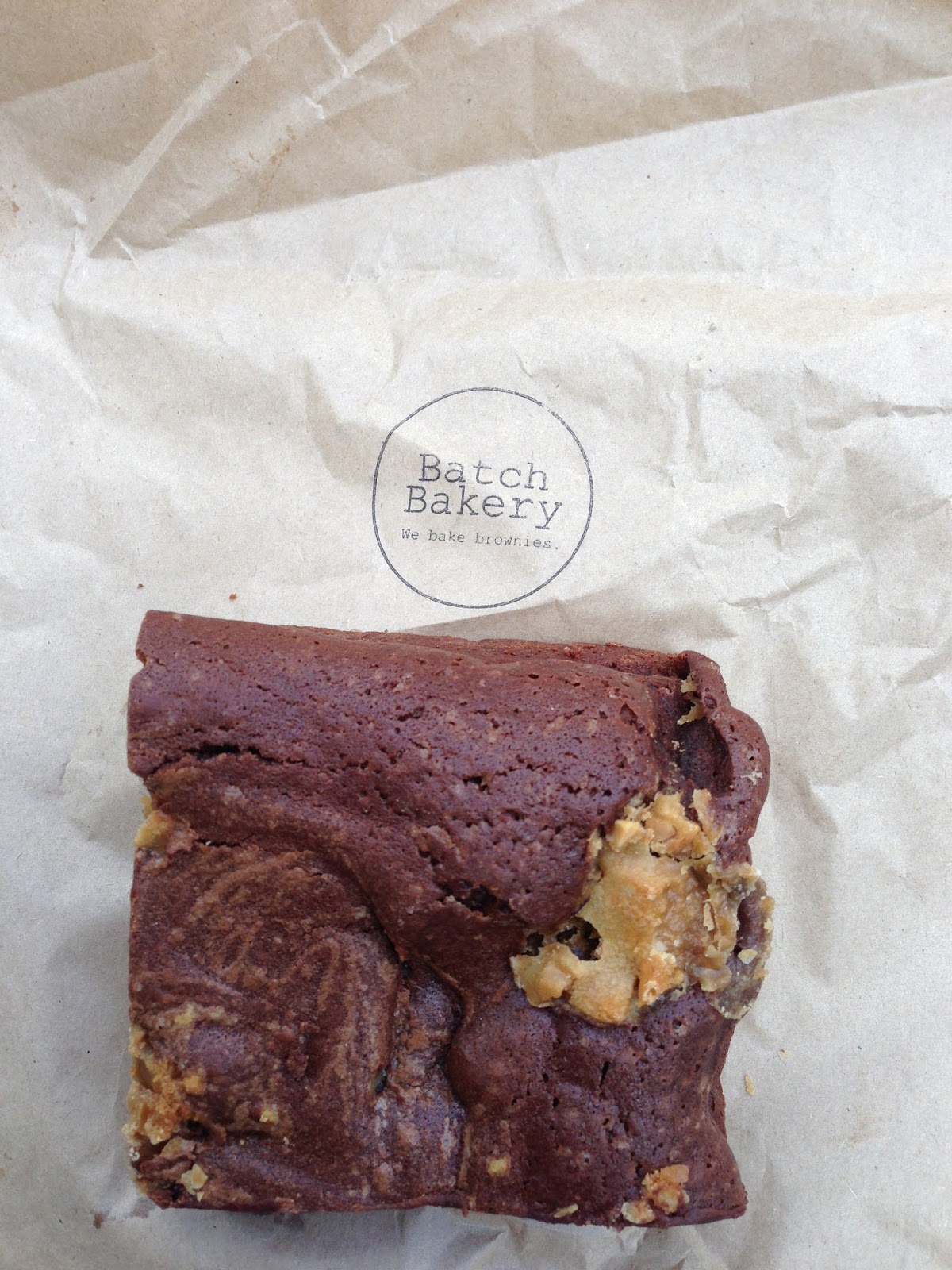 I was actually inspired to visit this stall after seeing a #foodporn photo of one of their salted caramel brownies posted by my friend Lottie on Instagram.  Sadly they had sold out by the time I arrived, it was all good though, the peanut butter in this brownie had a fudginess about it which blew.my.mind. It was SO yummy.  I remember seeing the batch stall the first couple of weeks but eversince it seems to have been replaced by…. 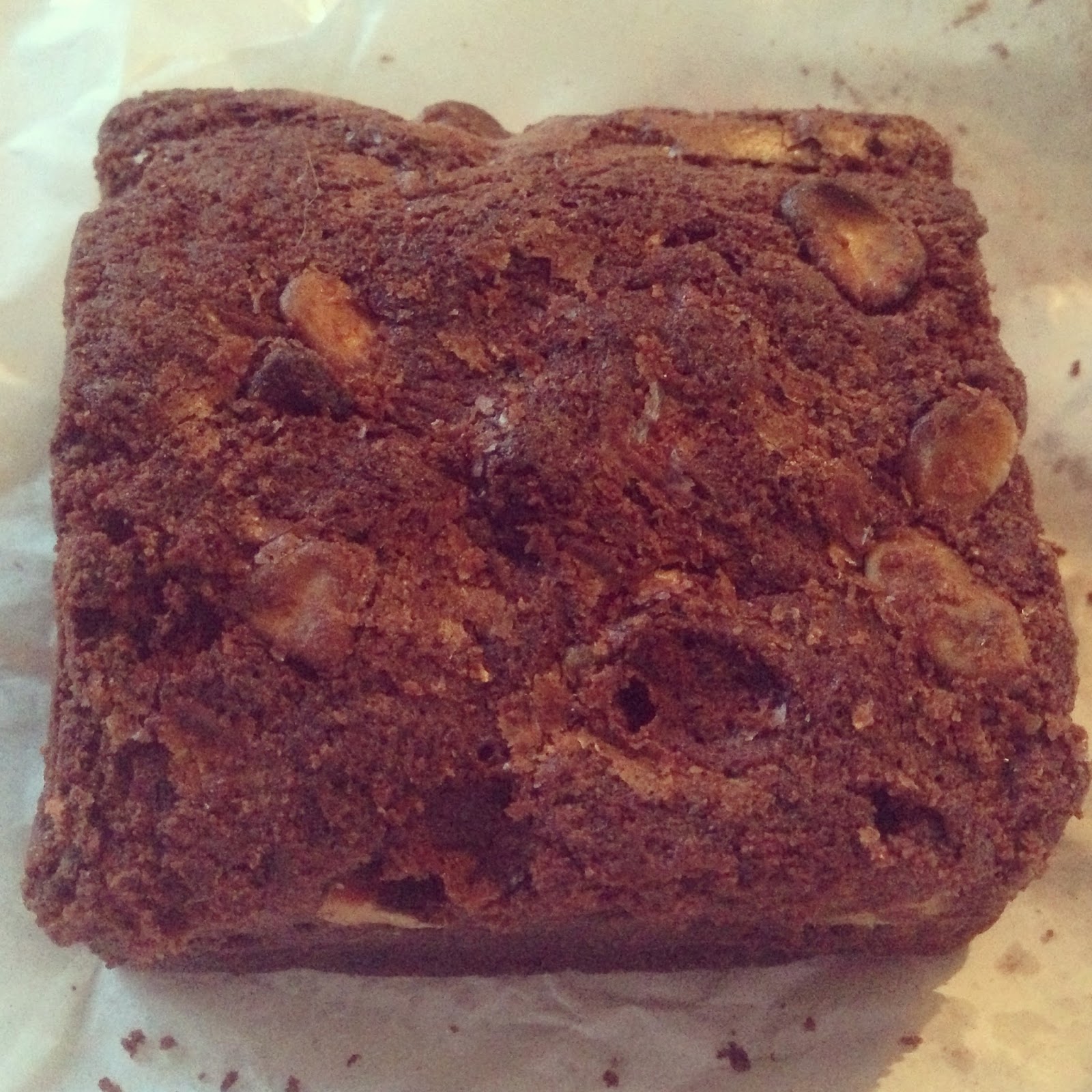 … honeycomb cakes, where I bought this rather excellent turkish delight and pistachio brownie from.  Totally impressed I went back the following week and opted for another brownie, but this time one with peppermint creams in- WOW.  Sorry about the lack of photo but I dropped it (in its bag) and it broke into 4 or 5 pieces which I’m not ashamed to admit I shovelled down my throat in record time. You can find them on Facebook and Twitter as well as their website (linked above).

Have you been to Street Diner yet? I would love to know your thoughts and recommendations for the next time I return!