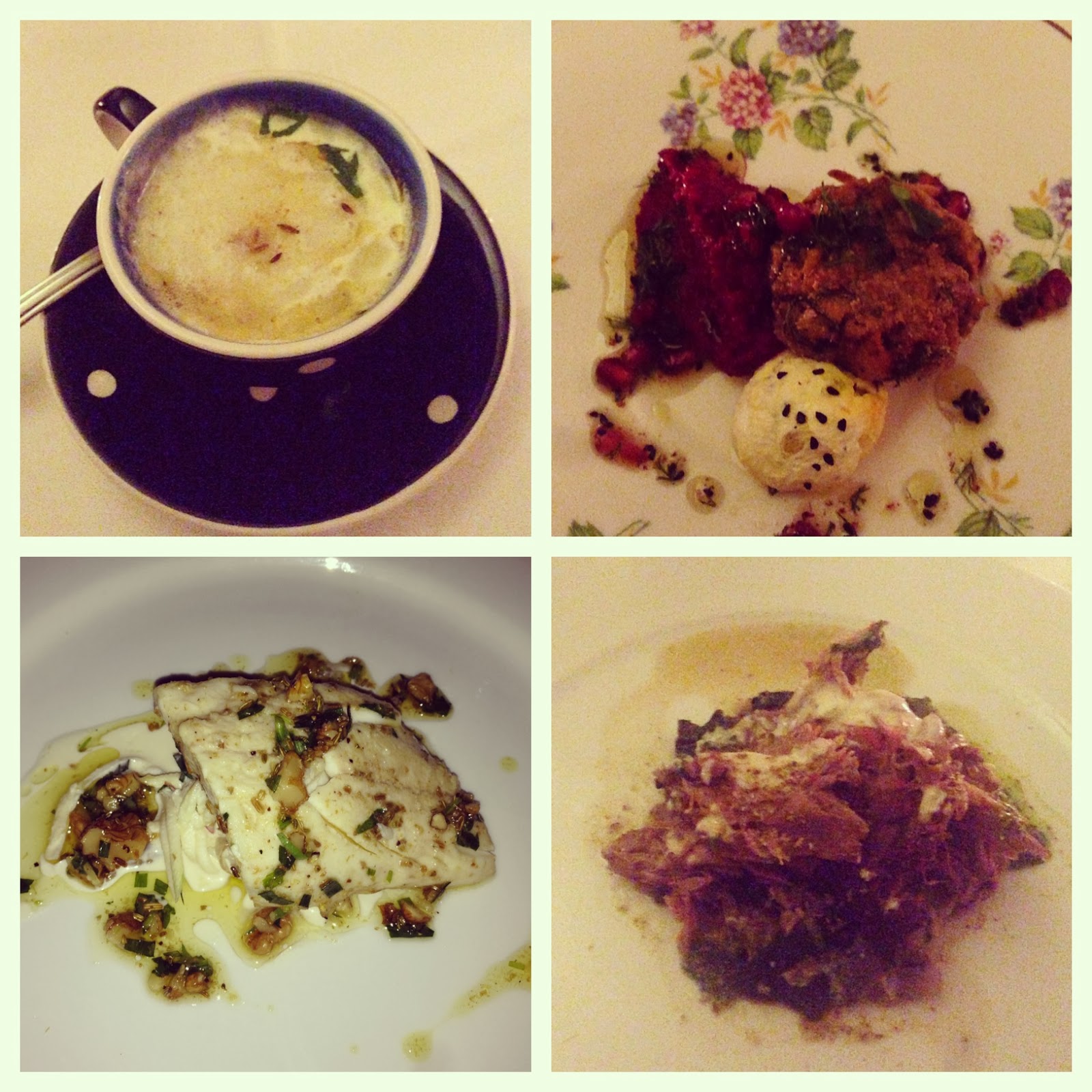 Ever since I set up my Twitter account over 2 years ago I’ve fallen more and more in love with it. Not only is it the more civilised of the two main social networks (have you ever heard a scumbag on Jeremy Kyle mention it? no? thought not) it’s a fantastic way to find out about all manner of things, you can follow famous people/strangers without it being ‘stalkery’ and as I’ve discovered in the last year or so, you meet some brilliant people too, most of whom are as obsessed with food as I am!

I first heard about the Cantina supper club when the lovely owner, Tina, followed me on Twitter after seeing my blog post  about Street Diner, I followed her back and we started chatting.  On one of my many visits to this amazing food market (if you haven’t been, you must, immediately) Tina had a stall selling her gorgeous food and after I’d taken my first bite I knew attending her supper club was a must and it was immediately added to my foodie ‘to do’ list. 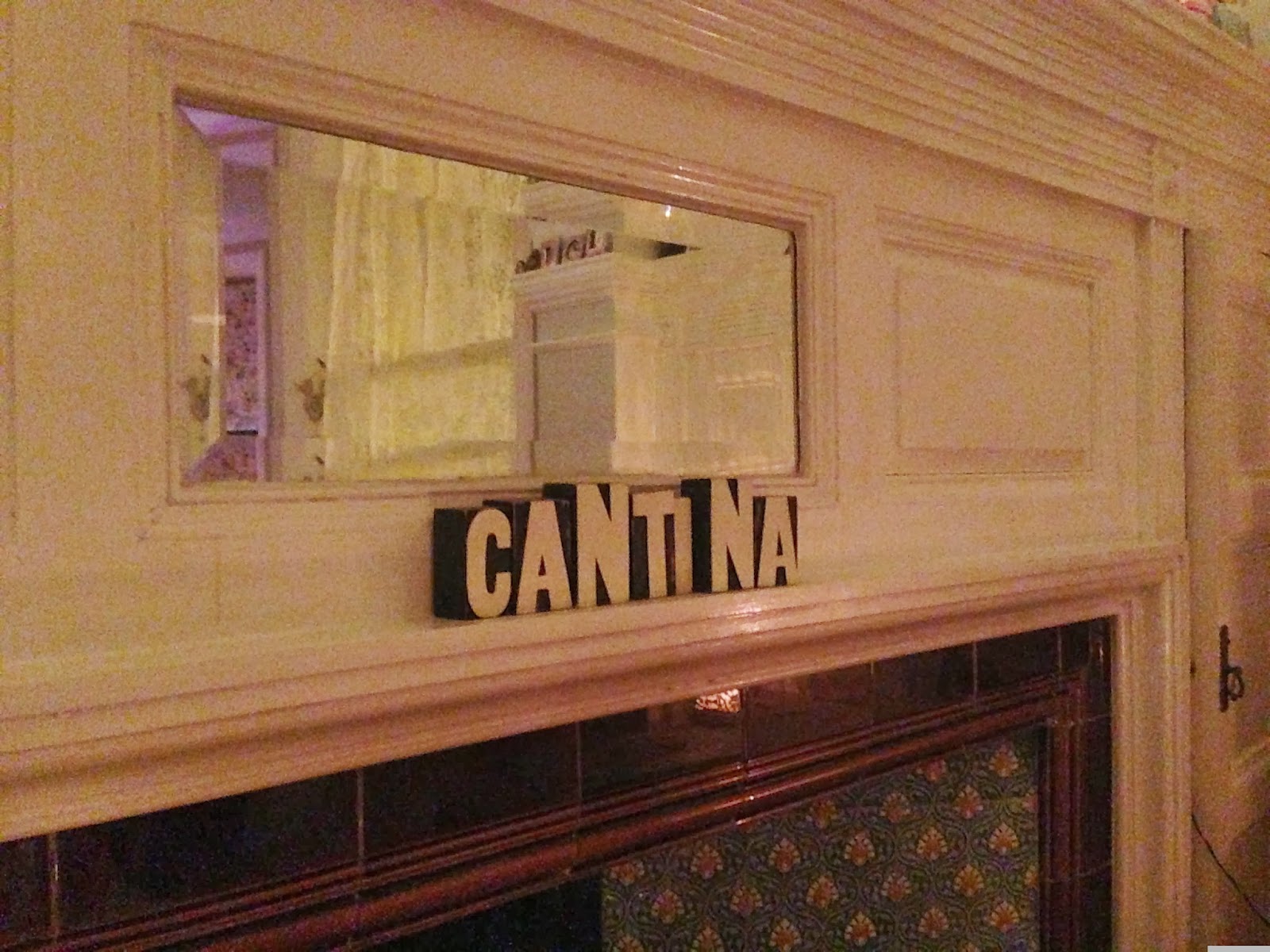 I booked in for one of the January supper club with my friend and fellow food blogger– Susie.  She and I also met through Twitter initially but it turned out we had a couple of friends in common so our pathes ended up crossing offline too.  We are incredibly alike, not only do we both have a food fixation and are complete gobshites, there’s so many other random similarities it’s actually a bit freaky.  We can’t see each other that often though because we are a terrible, terrible influence on each other…

It didn’t really dawn on me until the day that I was going to have to socialise with complete strangers, which for someone as uneasy with small talk and a tendency to come across as hostile as I have, is actually something that is way out of my comfort zone. A lot of people I know would get absolutely smashed (it’s BYOB) and just roll with it, I on the other hand decided that that would be where I would come unstuck so opted to drive, much to Susie’s bewilderment and distain. 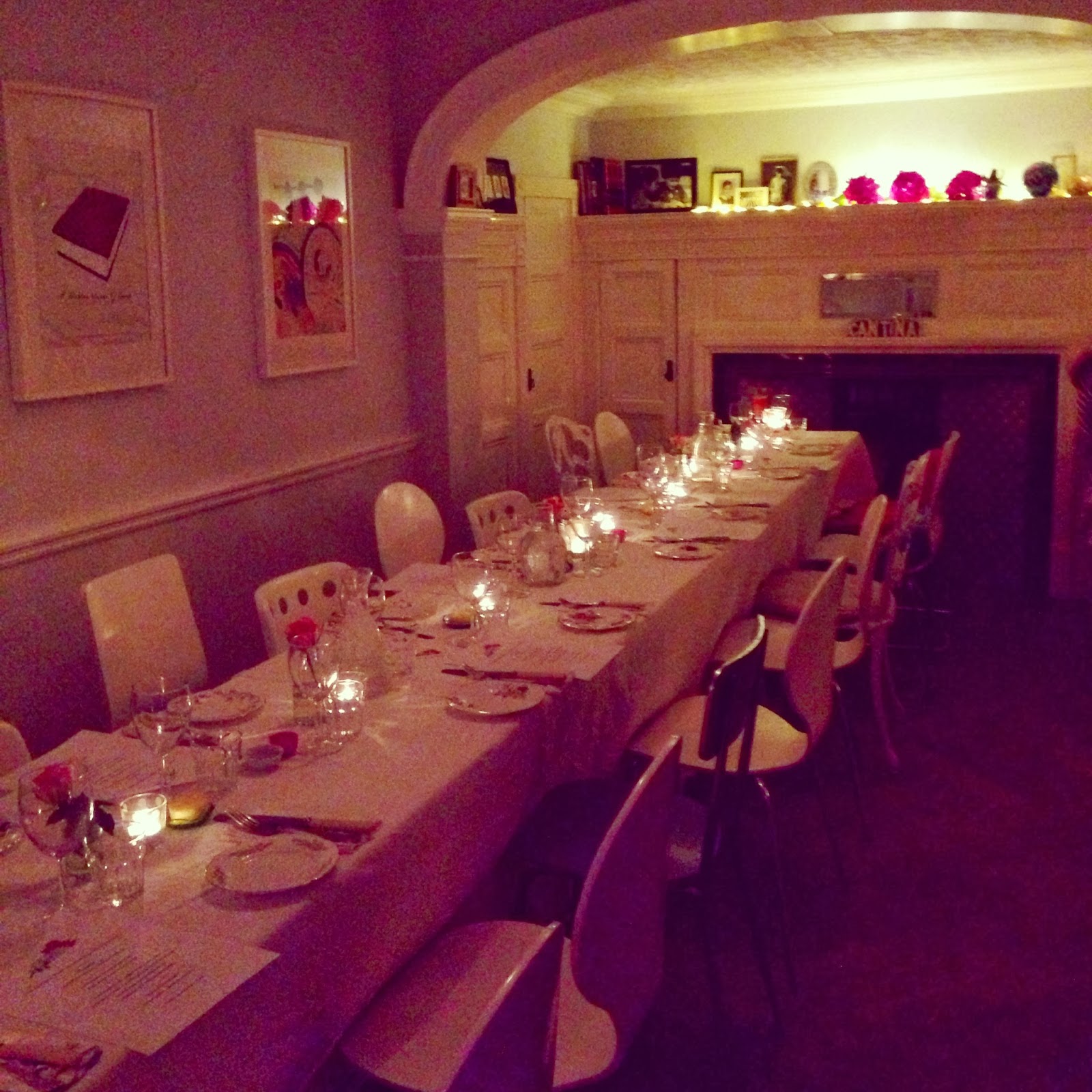 Tina’s home is absolutely gorgeous, she hosts her supper clubs in the large reception room of her regency flat in Hove.  She runs 3 or 4 a month and you can also hire the space for private dinner parties as well.  For £35 you get a pre-supper cocktail, 5 courses, coffee & chocolates and a pudding tipple.  She’ll adapt the choices to accommodate vegetarians and vegans too on request.

Susie and I were the first to arrive and opted for the seats at the very end of the table- mainly for damage limitation purposes but also to minimise the number of people we (well, me mainly) would have to make small talk with!

I’m not sure the sort of people I thought would be attending but it really was a mixed back in terms of age. There were quite a few couples, one of whom came with their parents, a small group of friends and one lady on her own who had been five times already!  We ended up sitting next to a couple in their early thirties and their friend (more on her later) and they were all very pleasant.

Before she served our amuse bouche Tina came in and gave us a bit of a spiel about her flat and also the background of her business.  She’s served an impressive 1,600 guests in her front room since launching in 2011.

Apologies for the quality of the photographs, the room was lit by candlelight and it was impossible to get a proper picture without a flash in some cases.

This was absolutely delicious.  The taste of truffle really came through and the slick of butter flavoured with cumin complemented it perfectly.  It made me extremely excited for the next course.

Now Susie isn’t exactly what you’d call a stranger to drinking, but for some inexplicable reason the glass of wine and cocktail she’d consumed seemed to be hitting her rather hard, much to my amusement.

Well actually it was amusing up until the point that the lady sitting to my immediate right announced that she worked for Nestle. I mentally did a sharp intake of breath (I’ve boycotted Nestle for years cos of the whole powdered milk thing) and tut, but managed to keep my expression neutral.  Susie on the other hand didn’t internalise her reaction at all and went straight in with a question about palm oil.  Needless to say Nestle lady bristled at the mention of it whilst I murmured “reeeeally” and put my face in my hands to hide my laughter/horror*.

Realising she’d made a faux pas she started desperately trying to redeem herself by saying things like “I just love orangutans that’s all” and my personal favourite: “When I’m biting in to my kitkat I just want to make sure I know where it’s come from”… Thankfully someone steered the conversation elsewhere and we excused ourselves for a cigarette before it became any more awkward. In the words of my friend Tom “It’s called the social slide, come on doooown”.

*To be fair to Susie had I have been drinking I wouldn’t have given a toss and probably would’ve pitched in with something far worse.

I fear I’m going to start sounding like a bit of a broken record by the fifth course as I don’t really have a bad word to say about any of the meal.  This had been the dish which I’d been looking forward to the least as beetroot is one of the very few foods I just don’t like.  But whatever wizardry Tina had done to it changed my mind.  The fritter was crispy and light and the labneh was delicious, almost mascarpone like (don’t worry I had to google it too).

This is probably the first time I’ve had anything with ouzo in it since I got absolutely wasted on it one summer when I was a teenager (don’t do it, it won’t end well) but in this case it was just right.  All of it was just right, the contrasting flavours were heavenly.

My favourite of the savoury courses.  The lamb was meltingly tender and beautifully seasoned.  The grain added just the right amount of bulk and the two sauces worked together incredibly well.  She brought out more of the lamb and the grain which I delightedly accepted.

Honestly one of the best puddings I’ve ever eaten, and I have eaten a shitload in my extremely gluttonous lifetime.  The cake was freshly baked, crispy on top and warm and fluffy inside with a slight hint of marzipan thanks to the ground almonds in it.  The salted caramel was a perfect as it looks and the ginger cream was strong tasting but sweet and not at all overpowering. I might see if she’ll give me the recipe actually as I need to eat it again sharpish!

Homemade dark chocolate discs with rose petals and pistachio.  They went perfectly with the coffee (small batch, Brighton) that was served after dessert. Loved them.

After polishing off a pre-supper cocktail, a bottle of white, some of the couple next to us’ prosecco and a dessert wine, Susie had reached critical mass.  She swears it’s down to a wheat intolerance but I’m not so sure…

Despite the fact that it definitely brought out a bit of my socially awkward side I absolutely loved my first supper club experience. The food honestly couldn’t have been better and far surpassed the standard in a lot of restaurants I’d eaten at.  The lady sitting opposite me said it was the best meal she’d ever had.

If you want to visit Tina’s supper club, and I strongly recommend that you do, then all of the booking info is available on her site or you can follow her on Twitter.

If you want to find out more about running a supper club, how they originated and the sort of food that can be served at them- I highly recommend this book by Kerstin Rodgers as it really is the ‘bible of the ‘secret restaurant’/supper club phenomenon.

Have you ever been to a supper club? What did you think? Let me know in the comment box below!