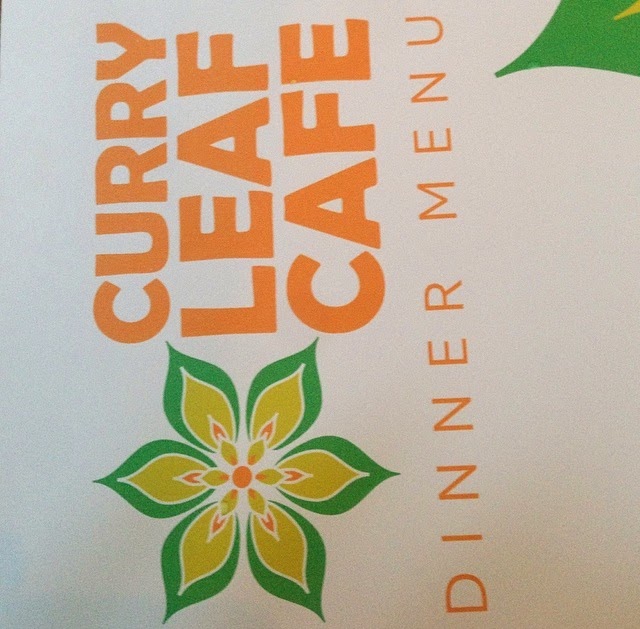 I know I know, another review, so soon after the last? I’m spoiling you guys?!   I actually visited a few weeks ago but I’d seen a lot of other write ups floating about, so put off posting mine for a while until some of the hype died down.

In the doomed Pizza 7 site on Ship Street the Curry Leaf Cafe has found its home.  The decorating is simple and colourful, echoing the colour schemes used on their logo. You can tell it’s all been done on a bit of a budget but the food is as sophisticated as the interior is relaxed. It’s got a nice vibe to it, far less formal than the Chilli Pickle at night time.

There’s a very sweet, and well documented story about how the two owners met, so rather than regurgitate what other people have already written I thought I’d point you in the direction of their website for all the details.

I can’t remember what any of the chutneys were other than the top left which I’m pretty sure was peanut and tamarind, but they were all gorgeous.  The perfect thing to pick at while you decide what to have, I think for three quid the portion of poppadums could’ve been a bit more generous, but that was my only gripe.

Tandoor-roasted sweetcorn and cardamon soup soup finished with yoghurt and coriander. I never go for the soup option In restaurants like this, or in any context in fact, but my dinner date ordered it and I polished off over half of it.  Spicy, rich and creamy, I wish I’d had a pile of pillowy naans drenched in butter to mop it up with. The choice of starters is fairly limited, but I’d recommend this one without hesitation.  Because of its chunky consistency it’s a lot more filling than you’d imagine.

Semolina crusted prawns, marinated in a special hot and sour blend and then crisp fried.

The semolina coating on the prawns was crunchy and light without a hint of grease and the insides were meaty, firm and sweet.  The hot and sour sauce on the side complemented it perfectly too.  I really enjoyed the whole thing and would definitely order them again.

This was the only dish that I didn’t Absolutely love. The sauce was tasty, and really quite spicy too, but the pork was dry.  It wasn’t inedible by any means, it just wasn’t the chunks of melting deliciousness I’d been anticipating. When the waitress cleared our plates we mentioned that we hadn’t been mad about it but that everything else had been great. The Manager came over and apologised, I said it was fine, I didn’t want to complain, we just thought they’d want to feed it back to the kitchen.

This was one of my favourite bits of the meal.  That spinach Dahl was so good we ordered another large portion it it, it wasn’t listed on the menu but the lady serving us arranged for it immediately without so much as a murmur. The chicken pieces were sizeable and succulent. The rich nutty sauce was creamy with just enough heat, and the naan bread was perfect, like a little crispy cloud of loveliness.

I was quite disappointed that they only seem to do their king Thali on their lunch menu? I would have loved a portion of rice and some extra bits with this too, but then I don’t think it’s any secret that my appetite is crazy, and more often than not, insatiable to boot.

Banana fritter with an attitude, probably the nicest I’ve ever had in fact. It was meant to come with beetroot and cardamon icecream, but I am not a fan of beetroot at all so asked to substitute it.  The mango and pistachio gelato I ordered instead was perfect with it.

This looks like nothing special, but holy moly, that pineapple was drenched in a sticky, malibu and chilli caramel, which was unexpectedly spicy and absolutely delicious. I may have to try to recreate this at home, cos I could easily demolish a whole pineapple coated in it, alone, with zero guilt. The coconut and lime sorbet with it was exactly what you wanted to pair with the pineapple.

Other than the pork, I can’t really fault anything about my visit, the food, the staff or the follow up on social media after afterwards.  They are hugely conscious of people with food intolerances/fussiness as well, with vegetarian, vegan, dairy/gluten free dishes clearly marked.

Do I think it’s better than Chilli pickle? Hmmmm, hard to say as I’ve eaten at Chilli Pickle loads, and other than an incident with some bleeding chicken served to my Dad during their soft launch week, I’ve not got a bad word to say about them either. I think the jury is still out on this one, I know a few people who will vehemently swear that Chilli Pickle is the best, but from what I’ve seen, it’s too close to call  without having eaten at the Curry Leaf more than once.

Would I recommend it? absolutely, already have done and am looking forward to giving it another try in the coming months.

Have you been to the Curry Leaf cafe? Where’s your favourite place it go for curry in Brighton? Tweet me or comment below, I’m always looking to expand my ever-growing to-do list of places to eat at.