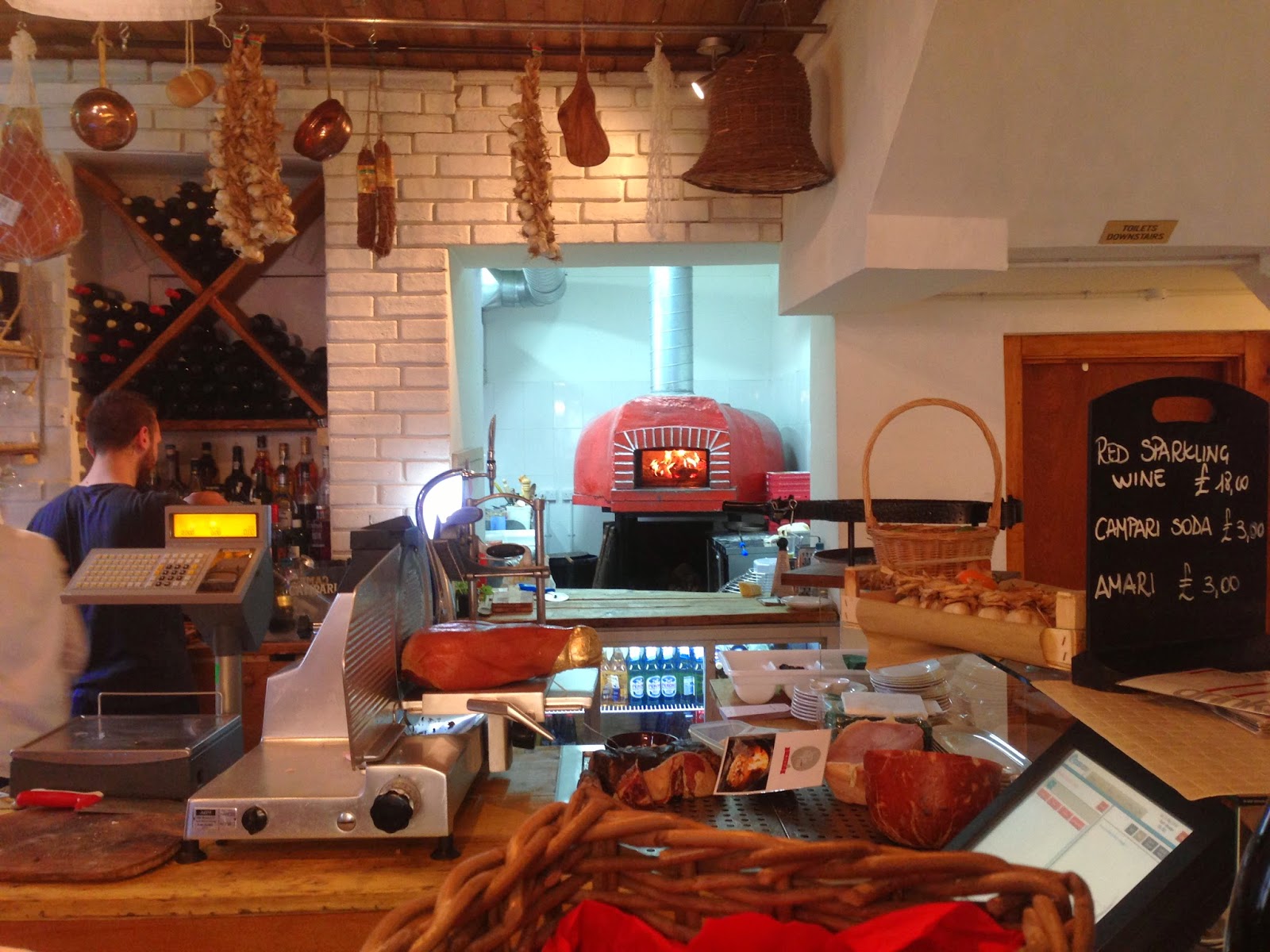 VIP- Very Italian Pizza is the latest pizza/pasta offering in Brighton, taking over the site where Oreganos used to be.  I used to get a lot of shit over the fact I was a fan* of Oreganos, but let me explain. I only every order takeaways when I’m hungover, and when I’m hungover, quantity is just as important as quality to me, and they did the best meal deals ever.

From what I’ve heard, VIP is run by Italians.  The name in itself is a big claim, and the only review I’d read about if was positive, so I had high hopes for this meal

* My love for them came to an abrupt end when they sent me a pizza with melted pieces of plastic all over it, and I had to go in and have a pop at the manager before she’d refund me. 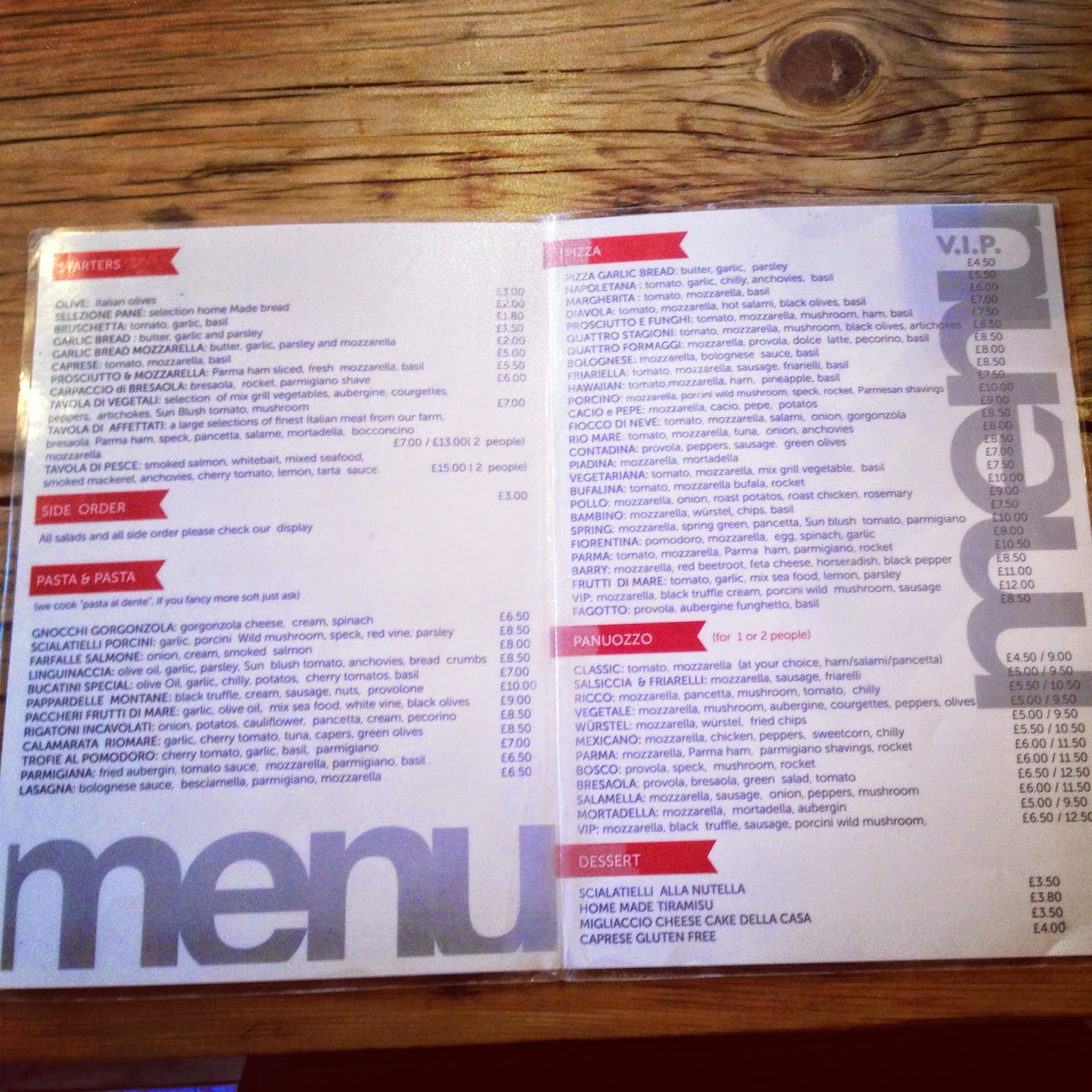 The menu is what you’d expect really, nothing especially exciting or ground breaking, but definitely something for everyone. 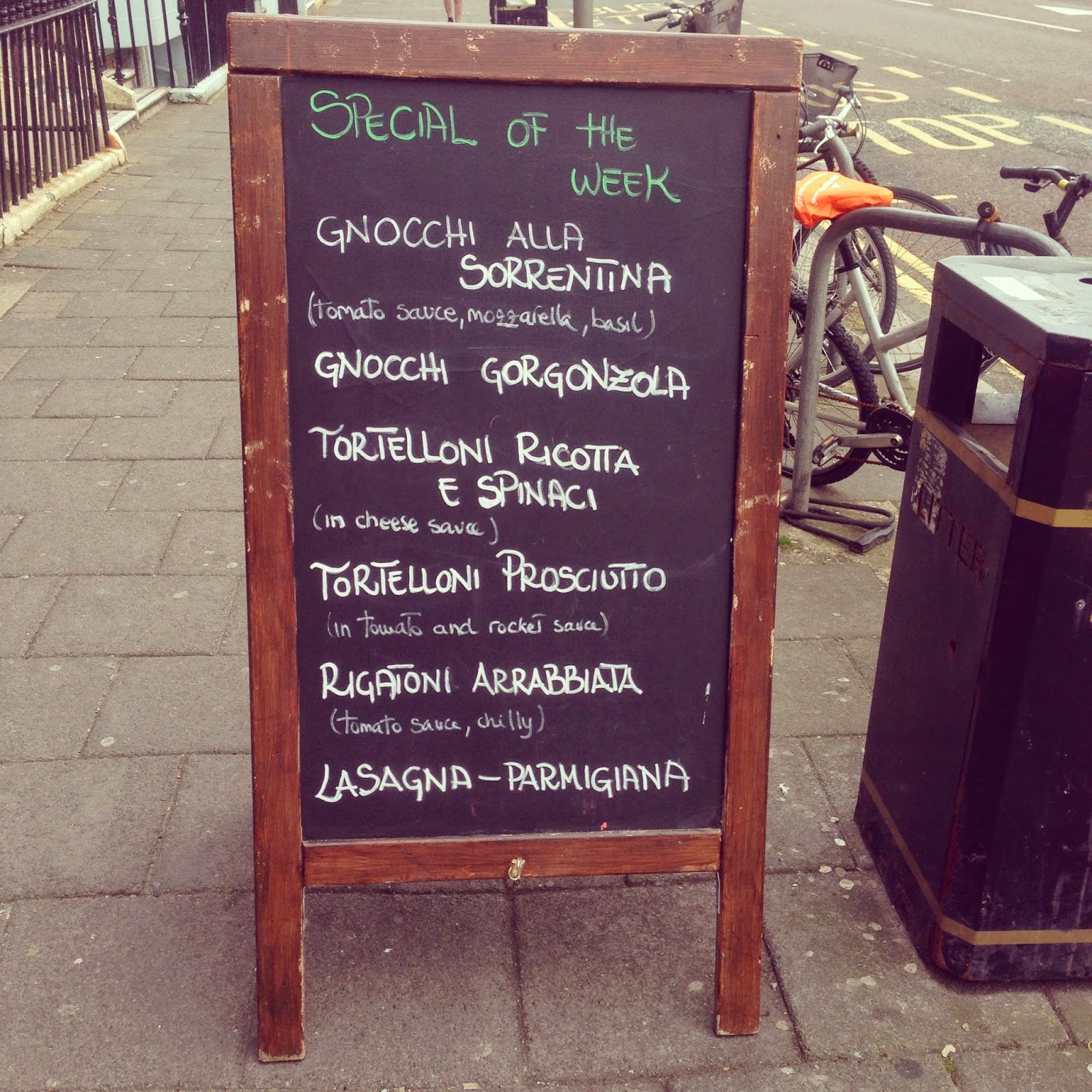 Weirdly, the only board the specials was out in the street.  Our waitress didn’t even mention them so I went outside and took a photo of it and took it back for my friend to see. 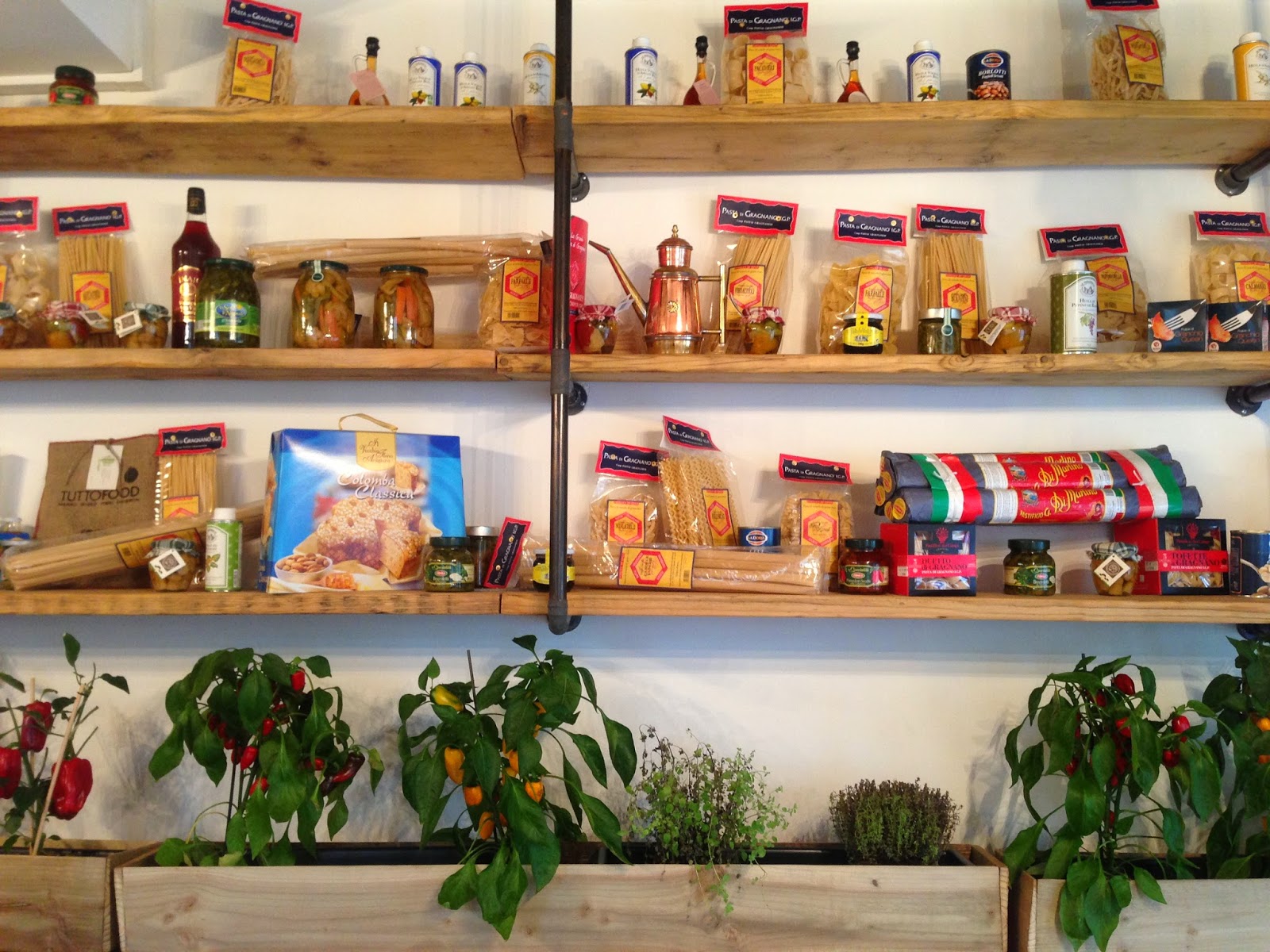 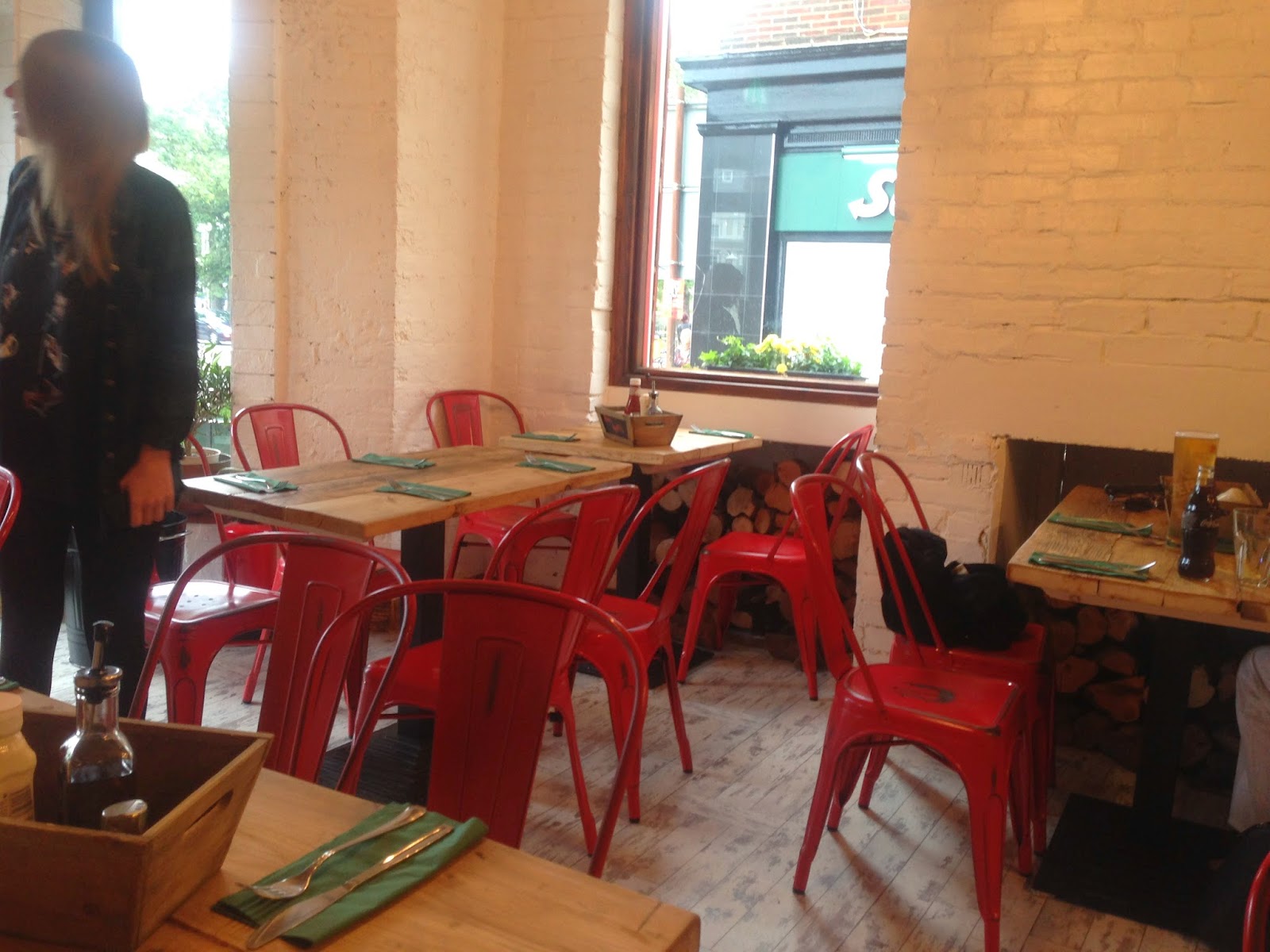 I quite like the decor y’know. The tables were a touch to close together, but nothing major.  Unless of course you’re sitting next to four extremely vocal (and drunk) Scottish women that is…

It smells nice, not a hint of bleach or dirty mop which i find restaurants/pubs with unvarnished wooden floors often do, everything was very clean and well thought out.

The loos are down some pretty much vertical stairs, which might be worth considering if you are coming with someone who might struggle with them (Mum’s with babies, People in wheelchairs or drunk people). 24 hours on I can’t remember what they were like, which I’m taking to mean they weren’t rank and they weren’t especially nice.  You may think it’s weird that I often talk about the standard of loos in the restaurants I review, but I think it’s very important and says a lot about the overall standards of a place. 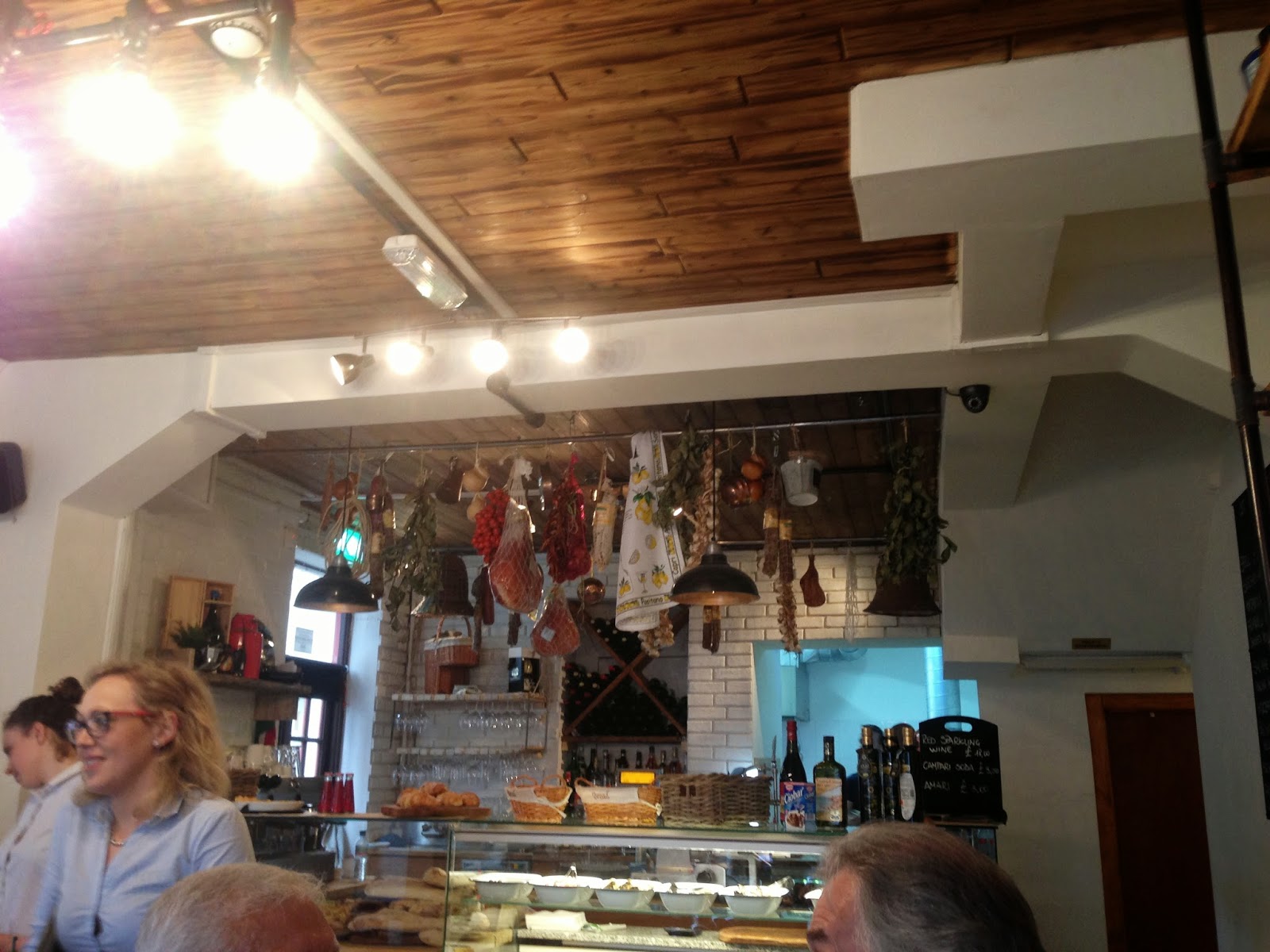 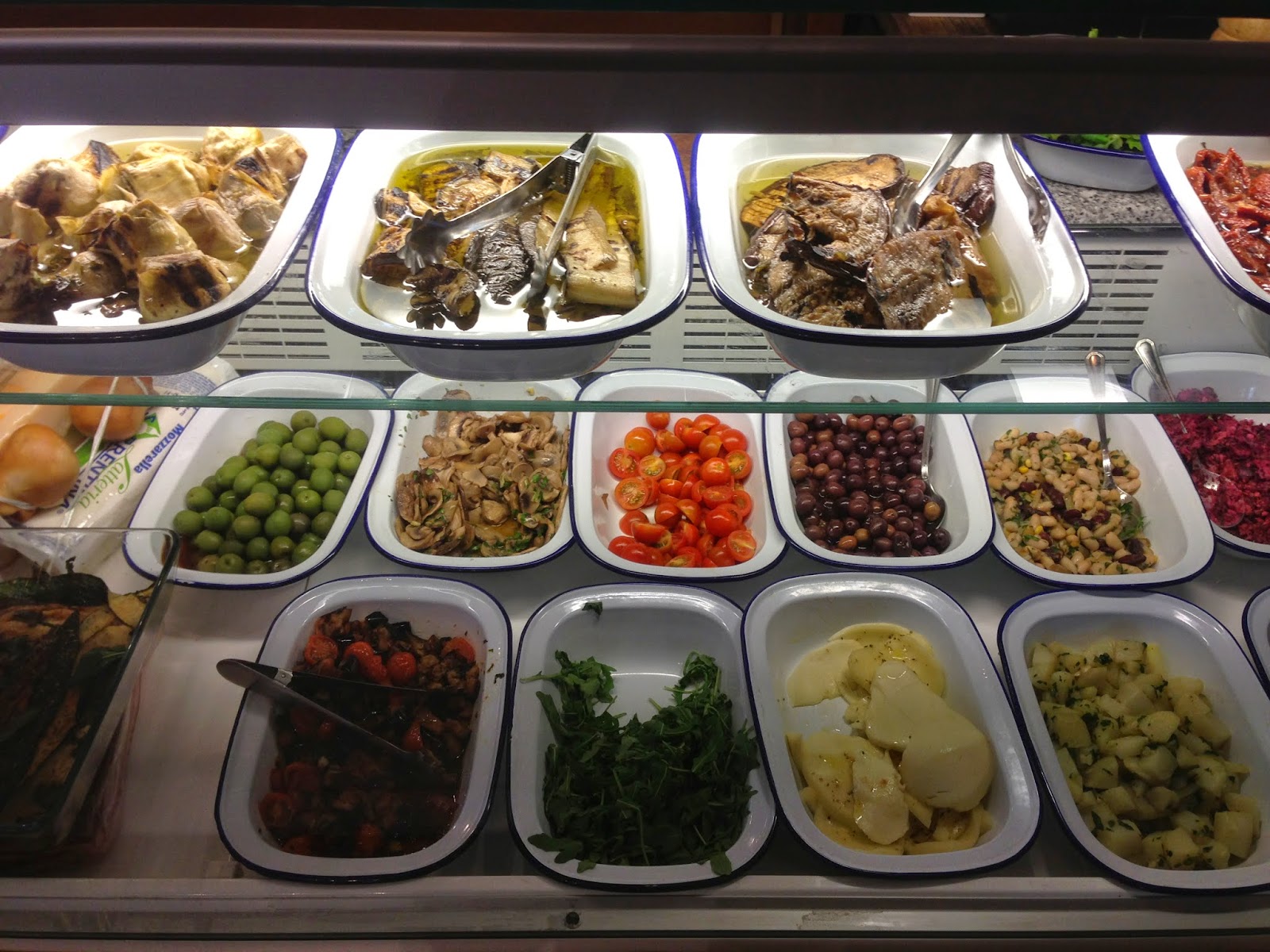 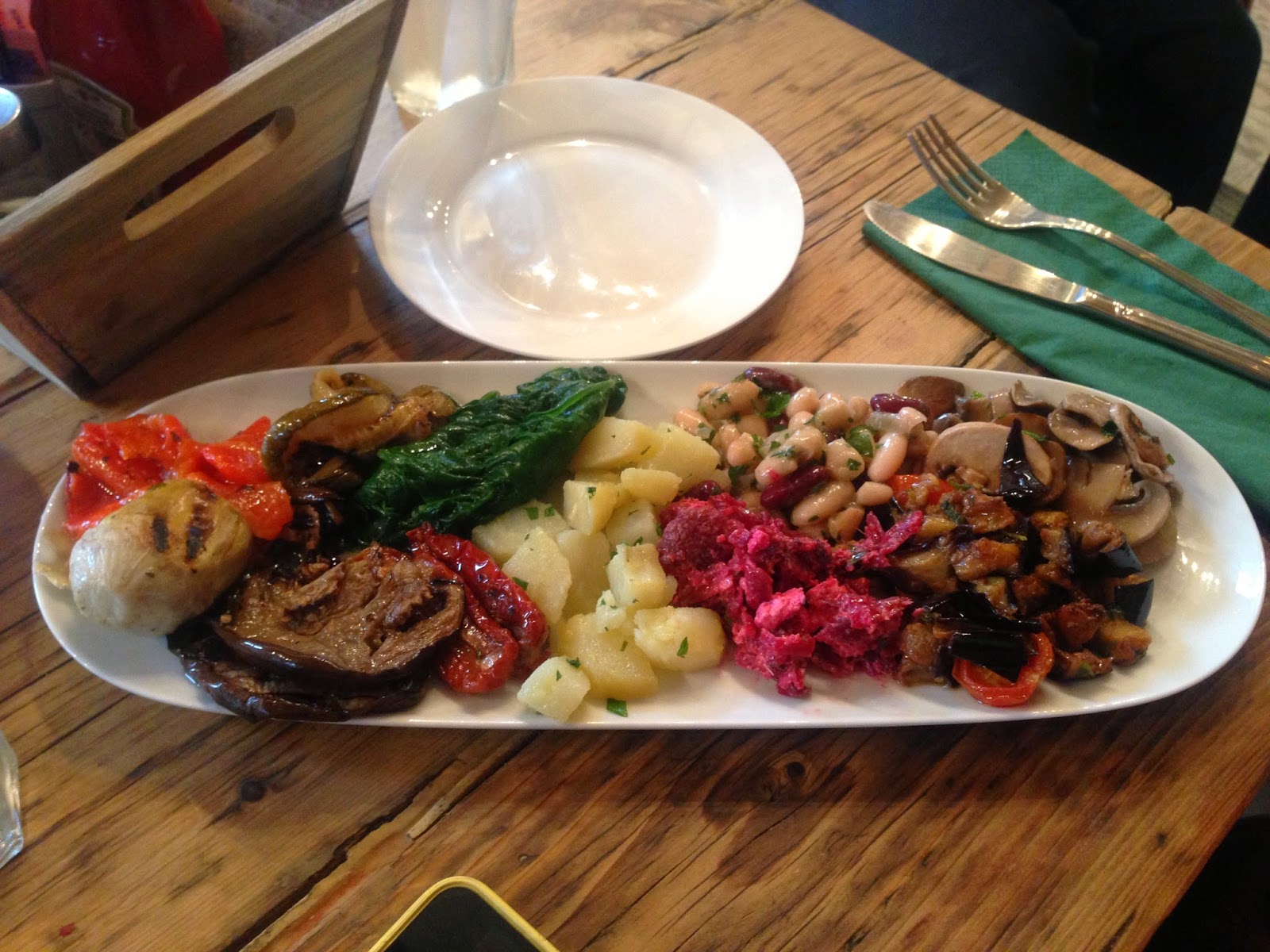 Hand’s down the worst part of the whole meal for me, and for my dinner date. I would put money on the fact that all of it came from either a tin, or a jar.  They all pretty much had the same texture and tasted of whatever it had been stored in.  I forced myself to try a bit of everything, the particular low points were the mushrooms and potatoes- I’ve no idea whether or not eating them both tinned is the done thing in Italy, but seriously, ewwww. 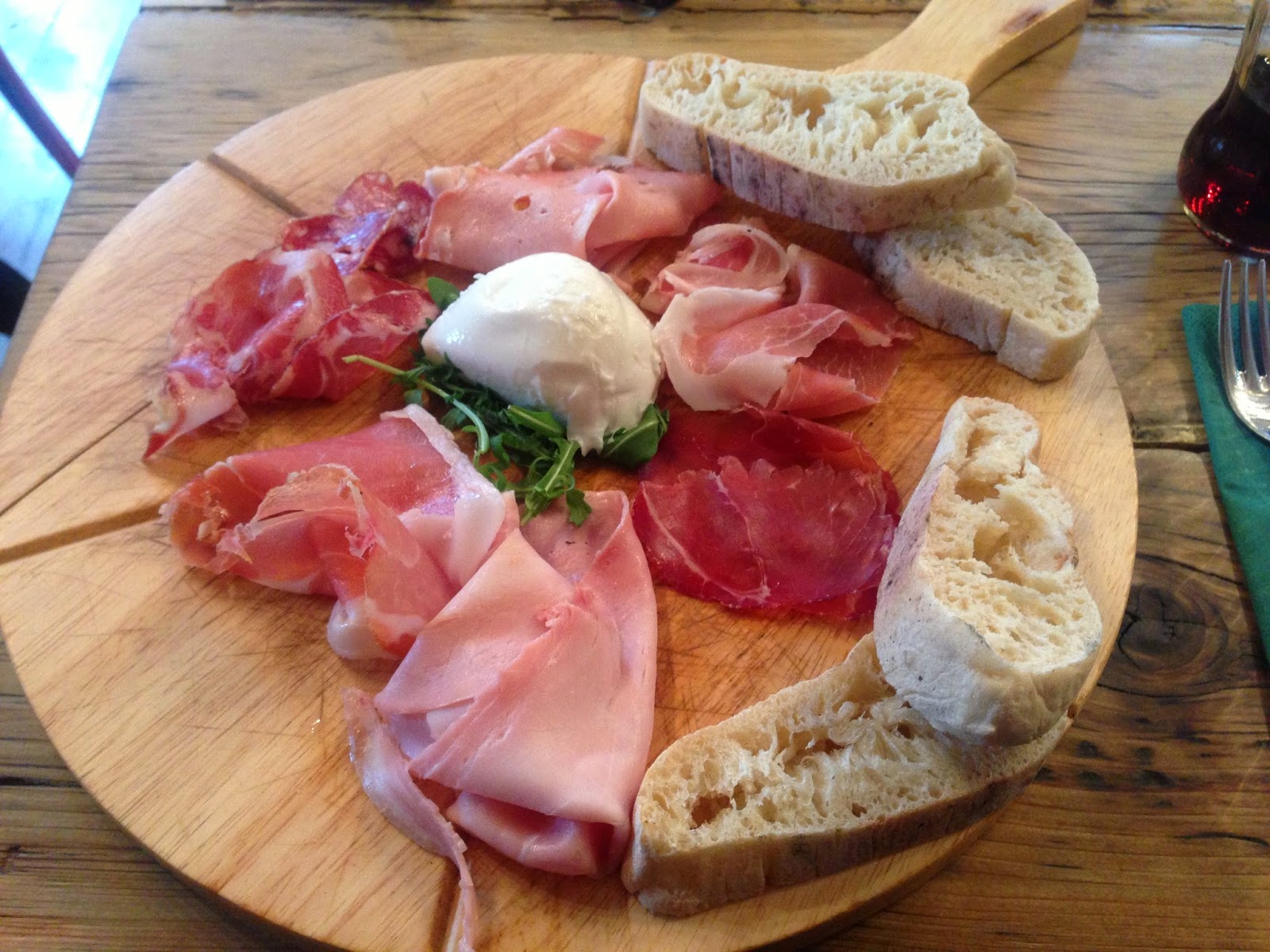 Also straight from the deli counter, this was OK.  I was impressed by the variety of meat and most of it tasted pretty nice.  The rigid mozzarella and rocket that was definitely on the turn, were not so nice. The bread was OK, bit dry, and I suspect it had been brought in (I may be doing them a disservice here though)

I asked for balsamic vinegar, and was told there was none.  It was a Satuday night in a ‘Very Italian’ restaurant, about 50 meters away from a Sainsburys and a large Morrisons… sort it out guys?! 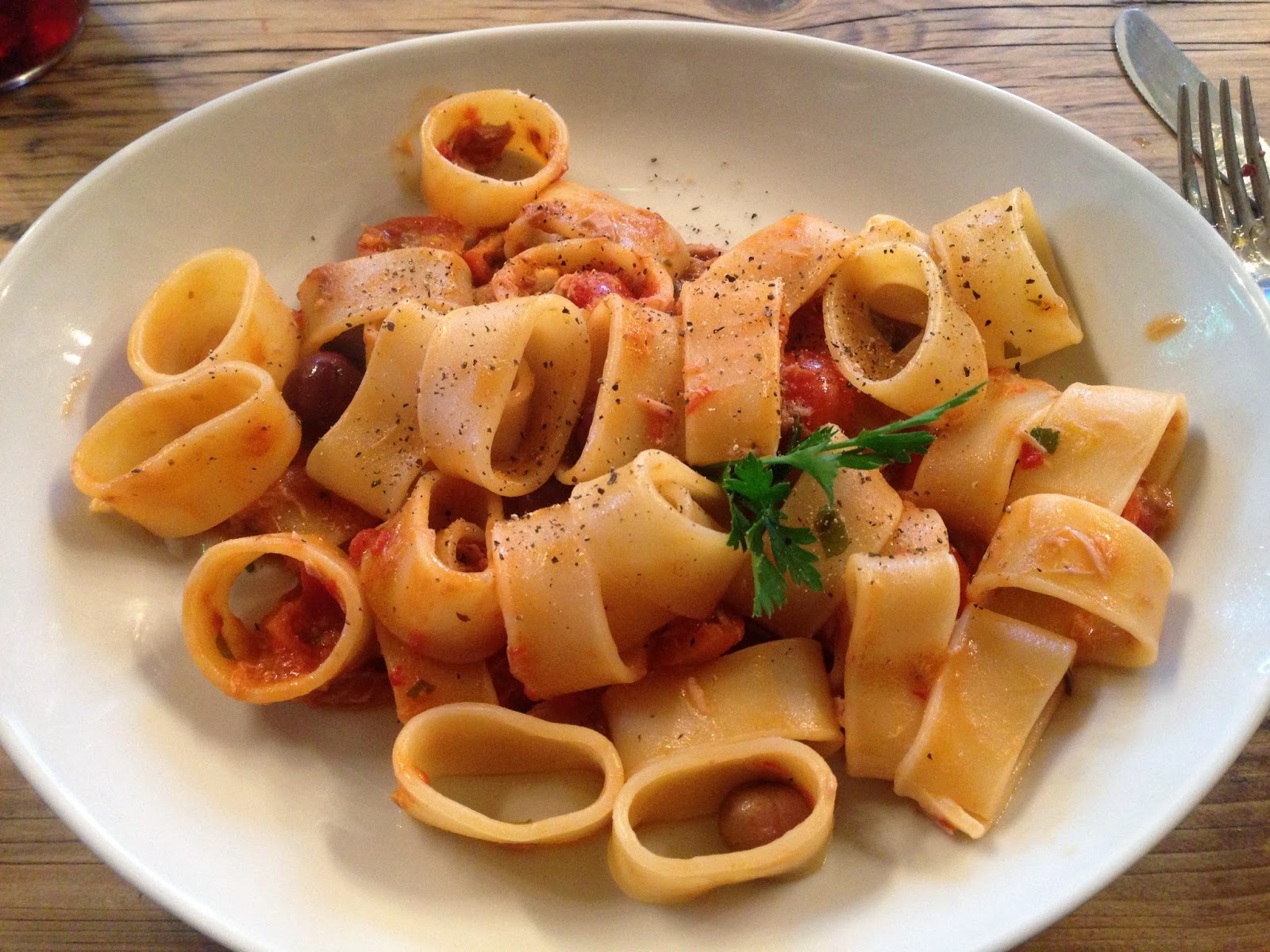 I really fancied some pasta.  I almost never eat it when I go out, mainly because I almost never go to eat at Italian restaurants and because it’s something I can, and do, cook for myself at home.  The guy next to us had ordered this and recommended it so I took a chance.

I asked them to substitute the tuna for some anchovies, something about tinned tuna that is warm gives me the heebie-jeebies, I don’t know why, it just does, same as avocado and egg too. Bleurgh.

Anyway, I digress. My pasta came out with both tuna and anchovies.  The waitress immediately offered to change it but I said not to bother, and actually, I really quite enjoyed it, despite the unwanted tuna.  The pasta was perfectly al dente, there was just enough of the flavoursome sauce coating it and I thought it was a reasonable sized portion too.

… I wasn’t that happy about nearly breaking a tooth on an unannounced, olive stone.  Pasta sauce with unpitted olives in!? Is that actually a thing? 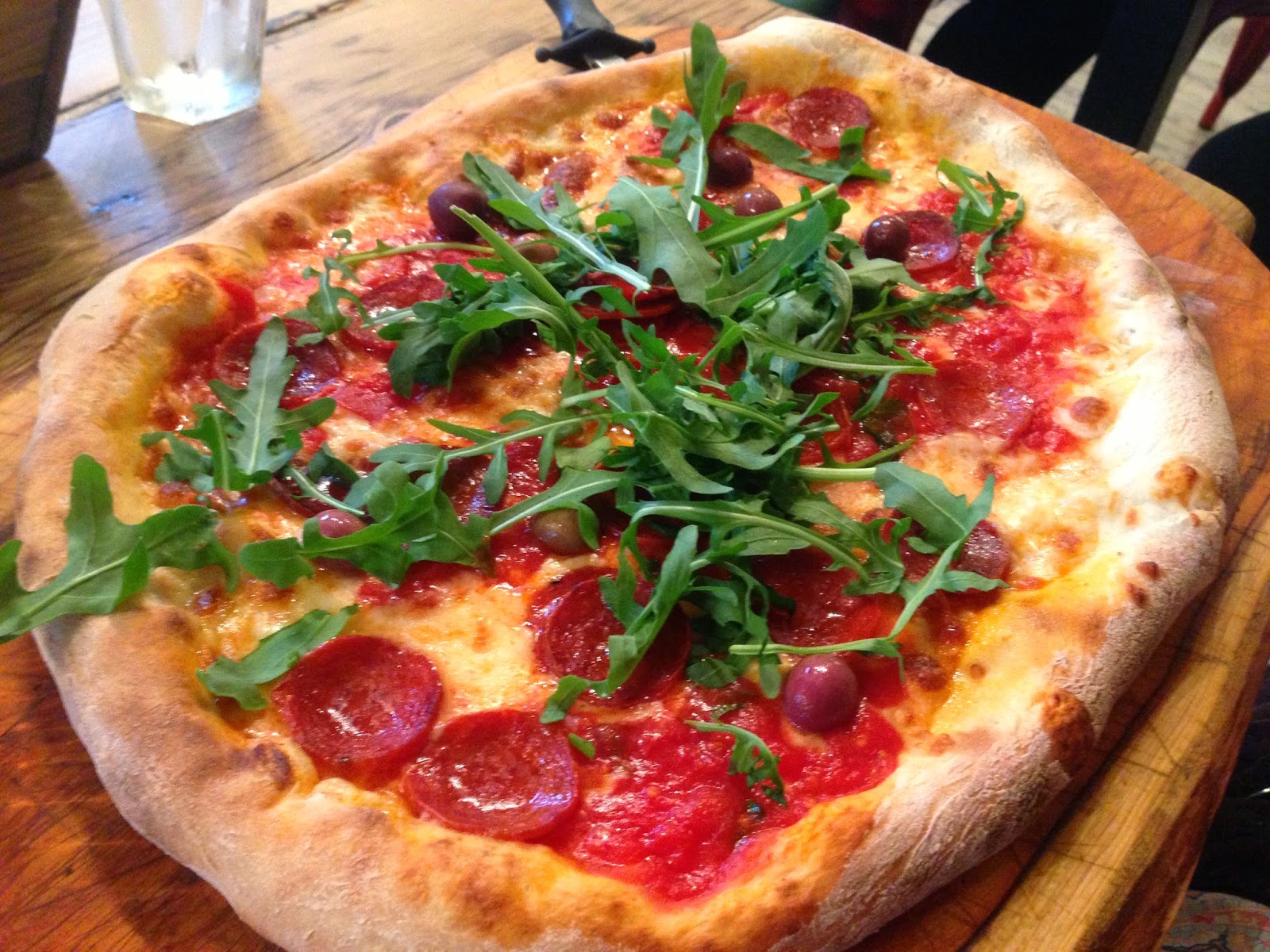 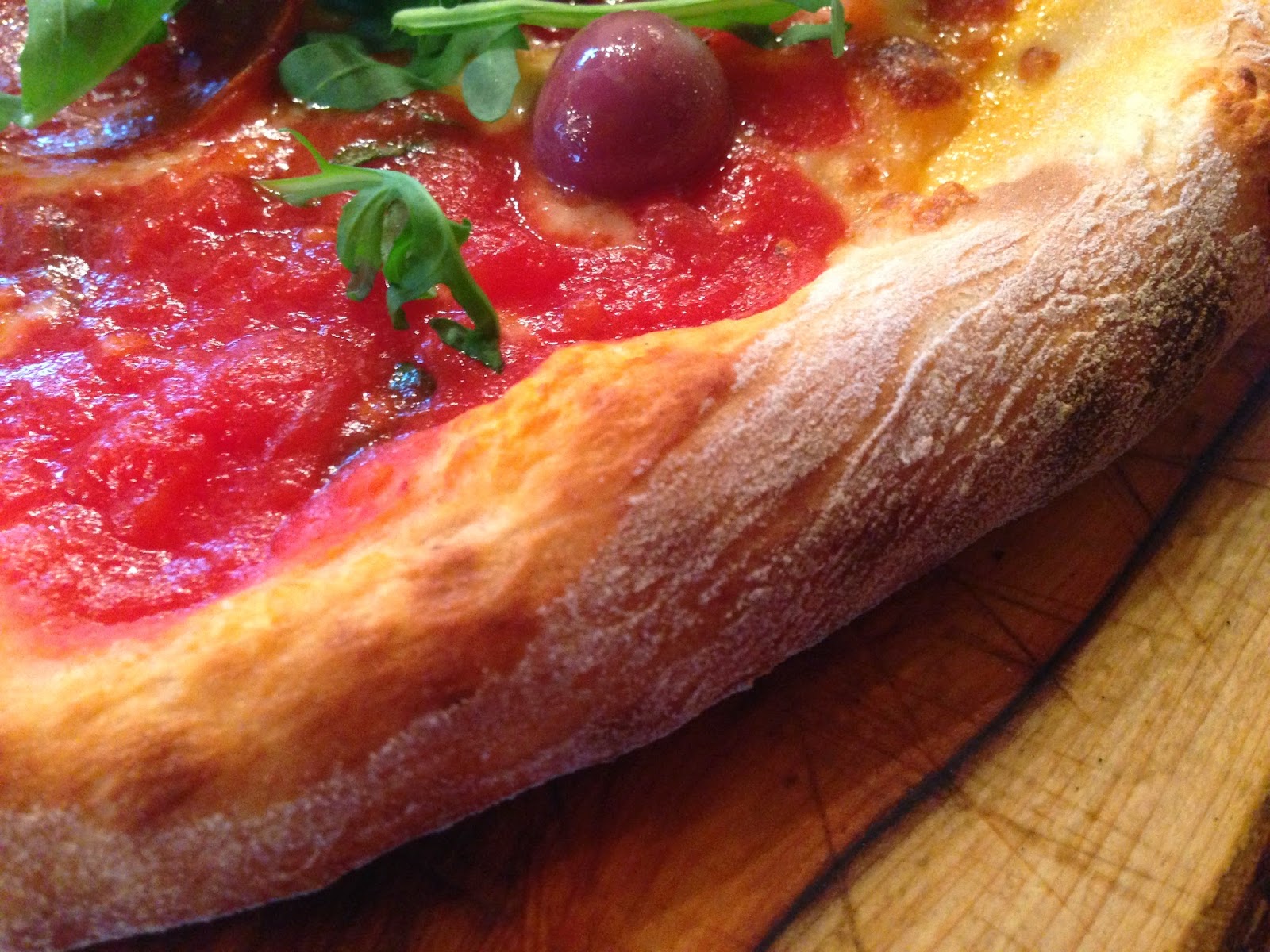 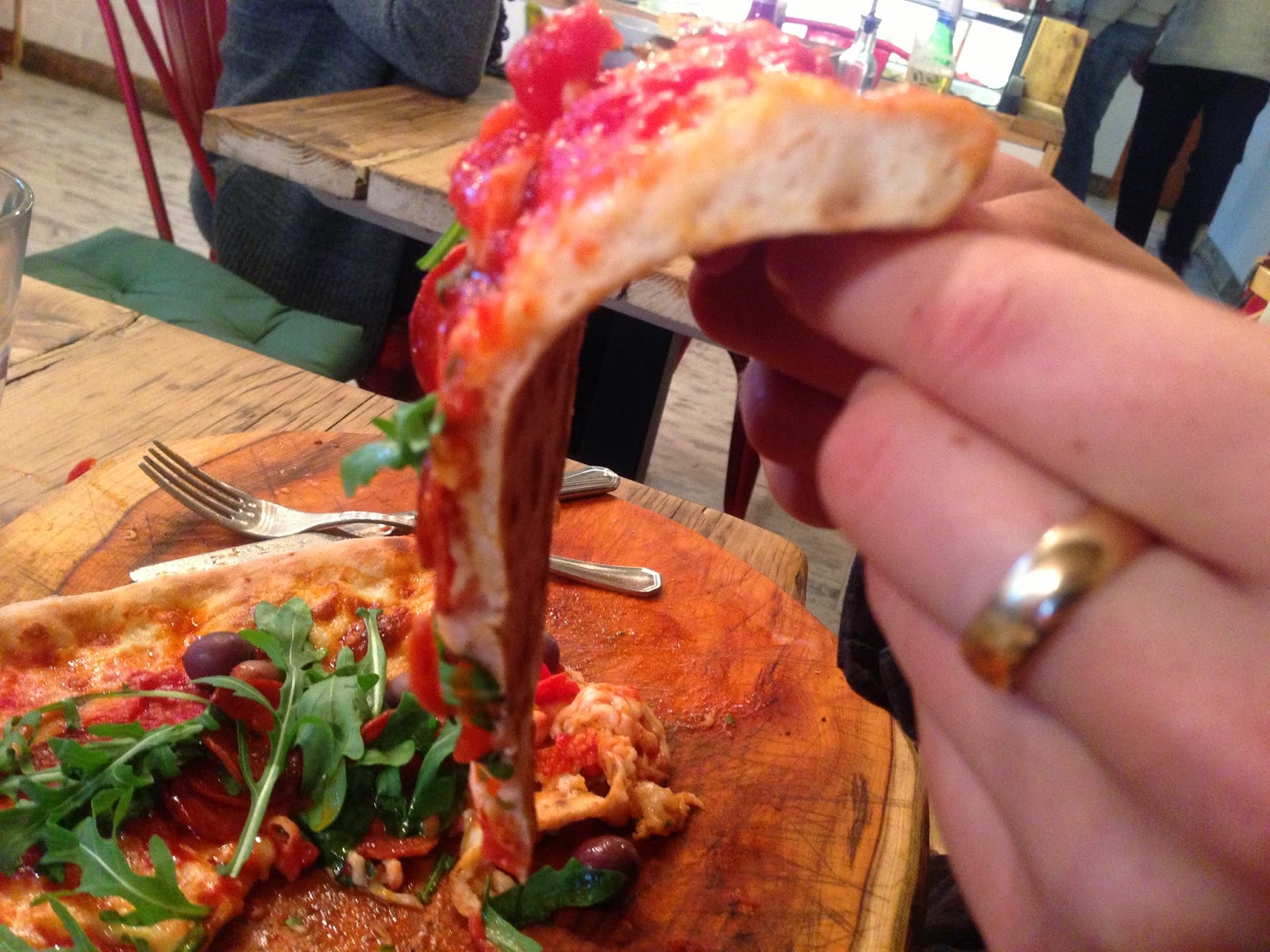 It’d feel wrong to talk about pizza without mentioning my friend and Italian Brighton food blogger: The Graphic Foodie, to whom I was tweeting photos to throughout the meal.  She calls the bottom photo ‘Baker’s droop’… (more on that later).

The good bits: Whichever tomato sauce they use, I  like it a lot, and they aren’t tightfisted with it either, which is something I’m always happy I to see.  The cheese was the perfect amount of melted and the pepperoni was miles better than any I’ve eaten in a while, and that includes at my new Pizza crush- The Hearth.

The bad bits: the base was soggy and flaccid.  Those bloody unpitted, albeit tasty, olives again and the crust (cornicione) had puffed up at bit, it didn’t have the pleasing black charred bits on that the pizza from Rossopomodoro or The Hearth had.  It tasted nice, but was seriously lacking in the airy and crispiness the other two had in such abundance.

We asked for the rest to takeaway and weirdly, they didn’t have any boxes so whacked it into one of those foil-lined bags that takeaway naan bread often comes in.  Needless to say, it didn’t travel well.  I’m assuming this means that they don’t do takeaway? 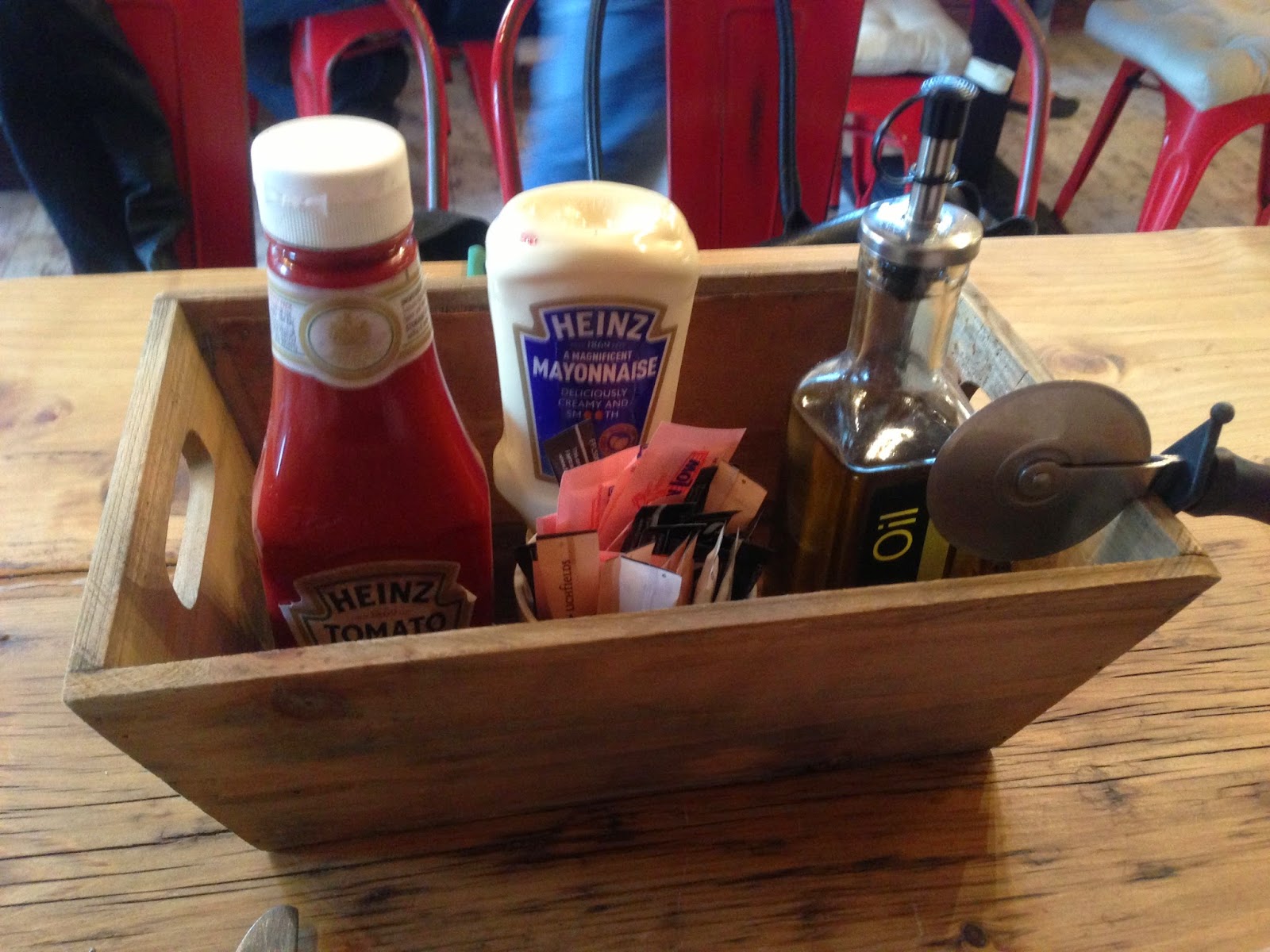 Seeing this in a restaurant which proports to be ‘Very Italian’ made me feel weird.  Ok, they are trying to cater for the philistines who want to put mayo and ketchup on their pizza, or possibly, kids- but when they can’t even rustle up a bit of balsamic, having a condiment tray like this on each table, feels wrong. 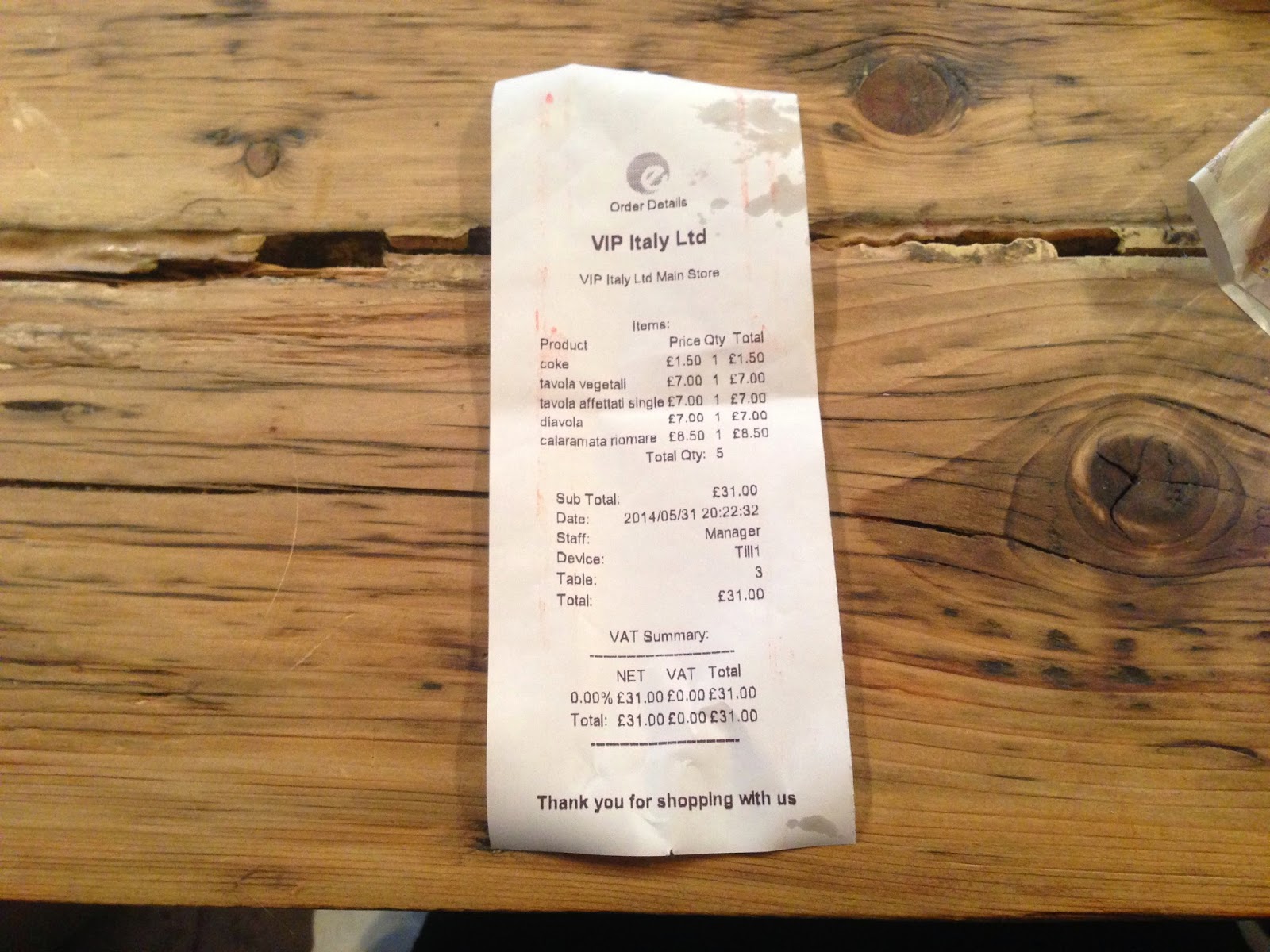 Having only been open a few weeks, the service is friendly, the setting is informal and has a bit of a weird vibe to it- don’t ask me to quantify that statement, it just does. The music was even weirder than the vibe (although this may have been a reason for it).  The other customers? An extremely mixed bag, and all slightly odd.

Other good points included: Our friendly waitress, reasonable prices (especially the pizza I thought), Coke in glass bottles and the vibe cheered up a bit as more people came in.

Have you been to Very Italian Pizza?  Where is your favourite place to eat pizza in Brighton? Comment below or tweet me.