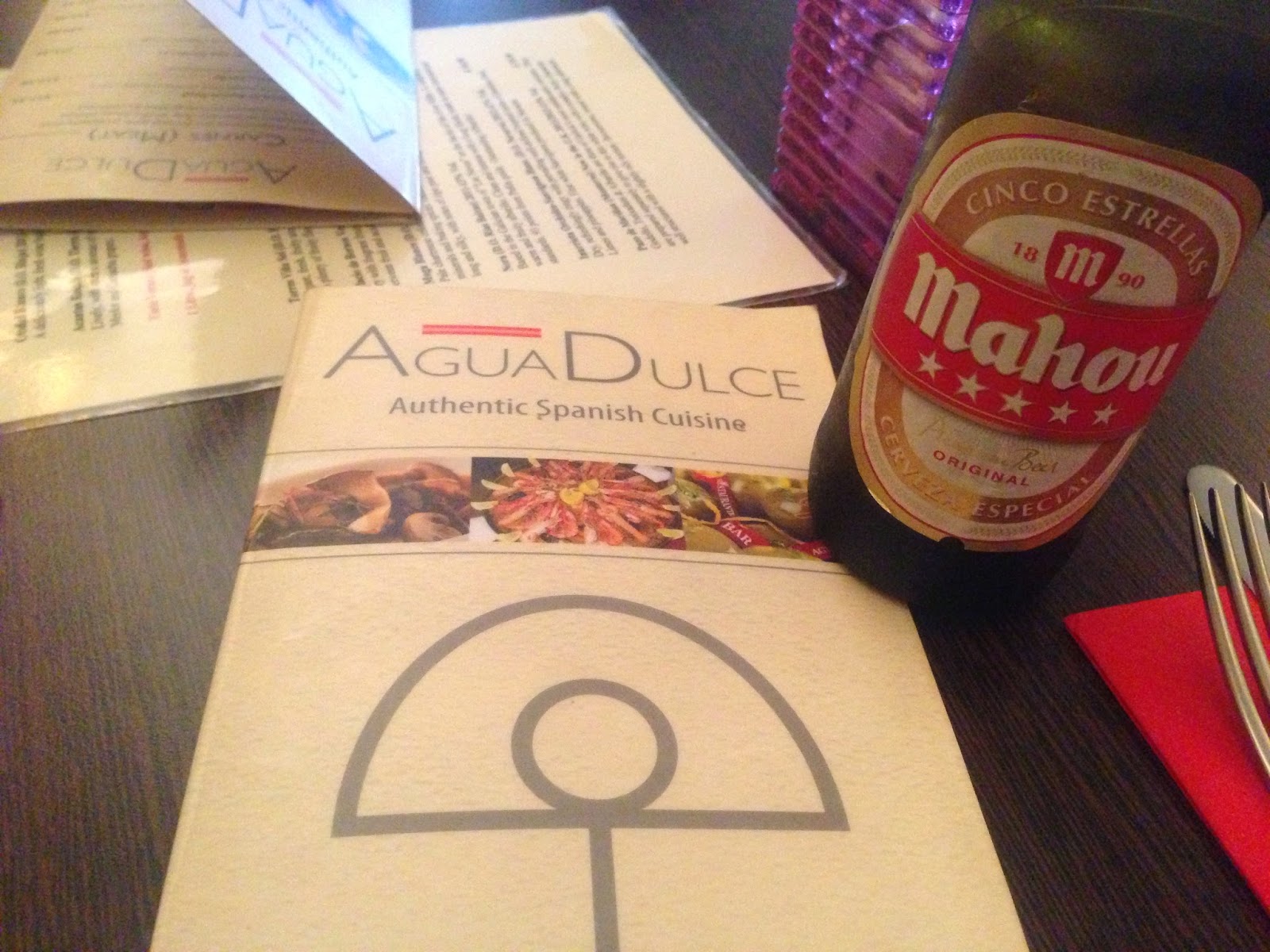 I don’t think other than a review of Casa don Carlos a couple years ago, I’ve ever really mentioned Spanish food on my blog.  I went to Solera d’tapas twice last year, but the first time was a bit of a weird one as I’d had the worst day, and although I took photos, my head wasn’t really in the blogging ‘zone’.  The second time I went we sat outside under some seriously bright pink heaters which seriously fucked with my photos. So yeah, I was really keen to try out some more of the handful of Spanish restaurants in this city.

I loooove a bit of tapas, I haven’t been on holiday to Spain for years, and I want to… after I’ve starved myself for a month to counteract the volumes of food I would spend all my time eating. Octopus, rabbit, chorizo- all that sort of stuff- bloody lovely.

I browsed their website, which by the way, is pants. It has one of those awkward layouts where you have to click about all over the place to see the whole menu, rather than just posting it all on one page?!  I digress, once I had navigated their website I became, some might say, inordinately excited about everything I was going to consume, and sent a message to a friend of mine telling her I was booking a table for Thursday night.  They’re open weird hours so check out their website and I’d imagine booking is advisable on weekends.

Alex asked for oil with the bread and was told a polite but firm ‘no’- that it was English and that we would have aoili, which incidentally was delicious, really really garlicky.  I quite like that he put us in our place though.

I’m not a massive fan of Spanish olives, I just find them a bit briny and hard, these were quite nice, but not the best I’ve ever taken.  The bread was bog standard but I’m quite a fan of this type of bread so happily troughed my way through three baskets of it.

They were as you’d imagine really, I particularly enjoyed the middle ones, probably wouldn’t order it again though, nice, but a bit ordinary. I’d have really like the rabbit special but Alex can’t bring herself to eat Bugs Bunny.

A bit like a Spanish tasting ‘Frank’s hot wing sauce’- if that makes any sense at all?  Really tangy and flavourful, there was just the right amount with the sautéed new potatoes.  I much preferred these to the deep fried mini roast potato style you often get in Spanish restaurants. Definite winner of a side dish.

Some bits (like bottom right) were meltingly tender and tasted like the most gorgeous, slow cooked shoulder of pork but there were a few bits that were really fatty, or actually thinking about it, maybe they were tendons or something like that cos it’s the trotter? Eww, won’t dwell on that cos it really was great overall, I’d definitely order it again. For £5.75 you got a lot of bang for your buck.

This was Alex’s choice and I was happy with it.  The prawns until bouncy but no rubberiness whatsoever  Rather than just swimming in butter and oil, this sauce seemed to have been thickened somehow and reduced down until it was a kind of stock- I really enjoyed mopping the remainder of this up with our never-ending bread basket.

Another really decent portion size and really simple but still delicious. As with the prawns, not a hint of rubberiness, perfectly seasoned and the potatoes were really oily, but in a good way. I’d rather have this than calamari (in a Spanish restaurant) all day long. 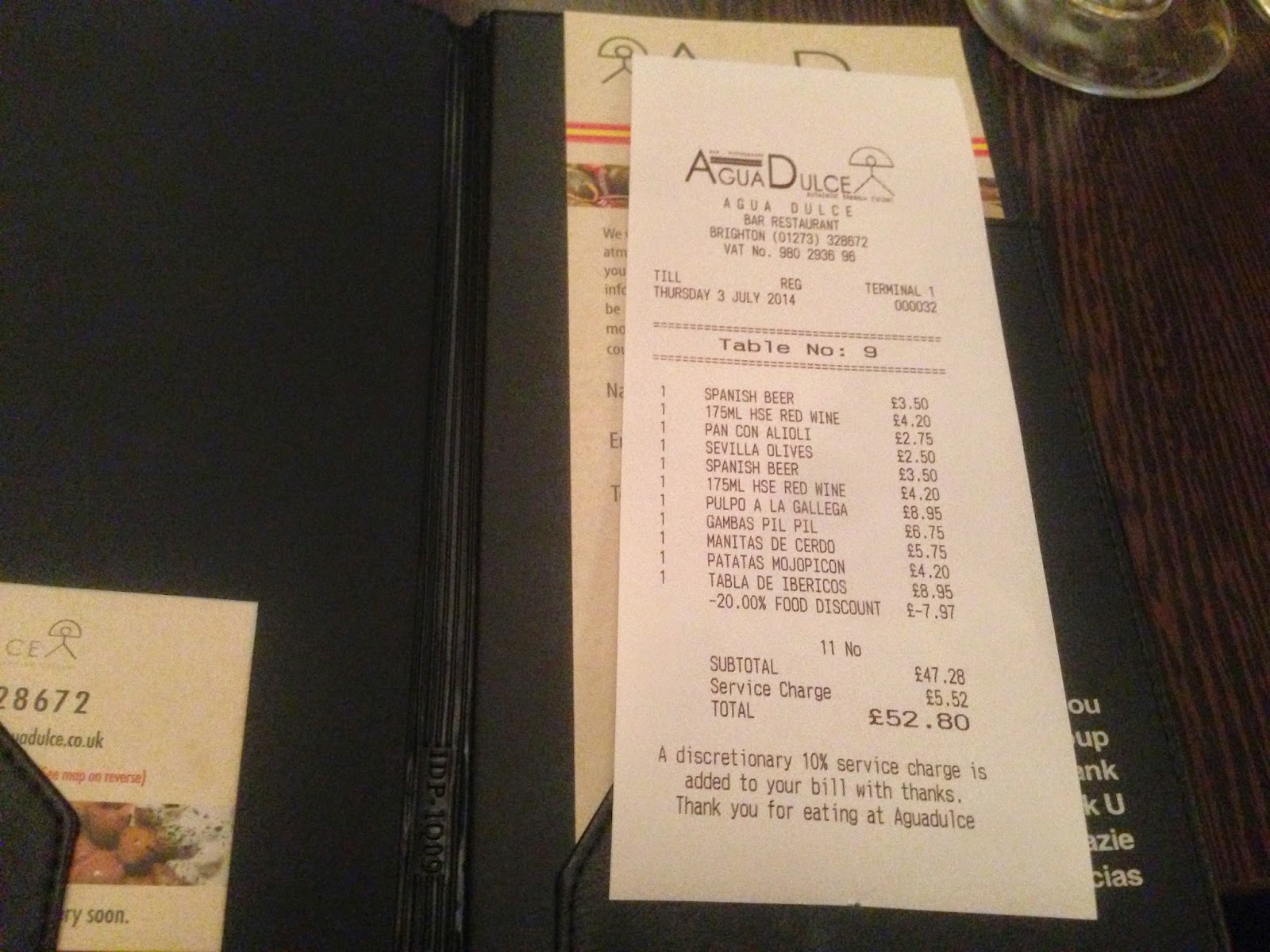 The service was spectacular, Carlos the owner was already utterly charmed by my friend by the time I’d arrived, so nothing was too much trouble for him.  He really was lovely, talked lots to us about the menu and the specials and even gave us a 20% discount- he’s a dude.

I can imagine on a weekend evening the atmosphere is absolutely buzzing, but on a midweek evening, it was nice, not dead by any means, just a bit flat. They do a flamenco night once a month, which I will definitely be avoiding, it’s the reason I’ve swerved Ole Ole for so long- I hate stuff like that. If there’s one thing I can say for Casa don Carlos is, it’s got the ambiance and authenticity just right and with no gimmicks.

Where is your favourite place to eat tapas in Brighton? Have you tried Agua Dulce? What did you think? Tweet me or comment below (you don’t need a blogger account to do so) I always love to hear from people about food!