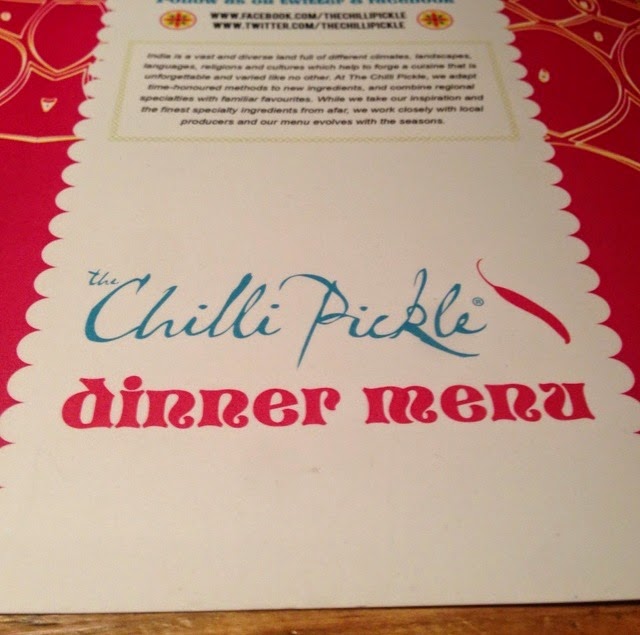 Chilli Pickle has been a long term love of mine, I first visited when it was in its smaller premises in Meeting House Lane and revisited many times before it moved to its new, far larger site in Jubilee Square (next to MyHotel).

I would seriously recommend booking, this place is rammo, pretty much every lunch and dinner service I’ve been there- I’ve even been turned away on more than one occasion, this place is popular. It’ll be even more in demand since they secured #50 in the best restaurants in Britain awards, which I think anyone who’s eaten there will agree, is well deserved.

I’d seen some food porn-esque new menu spoilers posted on Instagram, so when I got a last minute invitation for supper out there with a couple of friends, I didn’t take too long to re-think my planned ‘quiet night in’. What can I say, I’m a slave to the cause…

I honestly could have monstered my way through three of these platters alone. I ADORE this part of any Indian meal, but especially when the chutneys are homemade and so deliciously intricate in flavour. No meal there would be complete without some of these to start off with.

There isn’t enough pure tomato dishes in Indian cooking (in my experience) so this was such a nice change.  I cannot get enough of tomatoes in summer anyway and these crackers topped with tangy,relish were just the thing. I’d definitely have them again.

If I had to label anything unremarkable, dare I even say it, meh- then this would be it.  Don’t get me wrong, it tasted fantastic but all of the onions and tomatoes had made the papad (!?) go a bit soggy and therefore chewy.  Obviously I ate most of it, one of the people I was there with, the first time he saw me eat, said I reminded him of a baby dinosaur, I just wouldn’t order it again.  I’d have the crayfish, prawn and pineapple gathia instead, I can’t stop thinking about it.

The only place I’ve had soft shell crab in Brighton is Moshimo and I was pretty disappointed by it.  I had no such issue with these sexy little crustacea.  Be careful when you bite into them, they squirt fat out, and unless you’ve got an asbestos mouth like me I would wait more than 10 seconds after they’re set on the table before ramming them into your greedy gob… I definitely didn’t do this.  If you visit and you aren’t allergic to shellfish, then you must order them, it would be a travesty not to.

I’ve not eaten a vindaloo for years, I ordered one once thinking I was ‘ard, I was sadly mistaken, that stuff nearly took my head off.  These were altogether less intense. They glaze was sticky, and spicy- just not unbearably so and fell away from the bone like a hot knife through butter.

Not my usual tipple at supper time but it was very much needed as I was hanging from the previous night.  This along with a mango cocktail, some absolutely mental rum cocktail and myhotel and then the cocktail I talk about below too, I was ‘very nicely thank you’ as my old dear says.  It was an Indian twist on a bloody mary and you can definitely taste the spices and chilli in it.

I never order biryani, I’m not really that much of a rice person, I’d rather carbo-load on naan, chapatti and poppodom but this was honestly one of the nicest currys I’ve ever eaten. The rice was laced with preserved lemons and fresh herbs and spices all the way through- actually superb. The curry tasted exactly like Heinz tomato soup- Indian style.  The meat was chicken thigh so deliciously tender. The whole platter was absolutely flawless.

I’ve heard that they switch up the flavour of their Dal quite often, I’ve got to come clean, I’ve no idea what flavour this was, but I really enjoyed it, both in the restaurant and cold, at home the next day.

That long, rather rude looking thing is a venison seek kebab, which was, like a spicy, un-cased, coarse textured sausage. The tandoori lamb chops had loads of flesh on the bone- both meat dishes were fantastic.  The sweet potato Bombay a loo was such a great change on the usual white, and often hard potatoes you get in this dish. The sauce is hot onion and went perfectly with the meat.

There’s so many possible captions for this going around in my head that I can swear I can hear alarms and klaxons going off… but we’re here to talk about food.  Some might say it’s excessively and perhaps unnecessarily large, but I disagree, everyone looked at it as it came out and had I have seen one before I’d ordered, wild horses wouldn’t have stopped me from ordering something so humungous.  The paneer filling was rich and kinda creamy- I thought is was great, and a real way to ensure that the vegetarian in your life doesn’t feel like a second class citizen in such a meat orientated place.

Both absolutely gorgeous and just as good cold, I had the majority of them the following day with the rest of my doggy bagS.  I want to try the peshwari, it’s drizzled with honey and I’m a sucker for coconut with curry. I was going to post a photo of my stacked plate of leftovers but Blogger is being a dick and won’t let me upload it for some reason.

Does what it says on the tin. The beans were al dente and had a bit of heat from the chillies and the coconut was toasted added a really lovely dimension to it. I’d rather have this over sag aloo any day of the week.

One of my favourite shower gels is a milk & honey flavoured one, it smells like it would taste amazing too- obviously this would not be the case, but if it was, it would taste like this cocktail. I must look up the recipe so I can attempt to recreate it. I want one now so badly. I’m drinking lucozade, which is probably just as fattening and calorific and far less enjoyable. Bah.

Other stuff worth mentioning…

Would I recommend it? Wholeheartedly. Would I come back? Have you read the rest of this review?! I’ll definitely be back for some more of that biryani, and the crayfish starter, and the crab… etc etc.

I know that some people I’ve spoken to on Twitter will know if I rated it more than the Curry Leaf cafe, which I raved about (here).. I stand by everything I said about how good their food was, but the Chilli Pickle’s new summer menu is in a different league.  That said the CLC launch their new summer menu soon, so I’ll be paying them a visit too and I’ll report back.