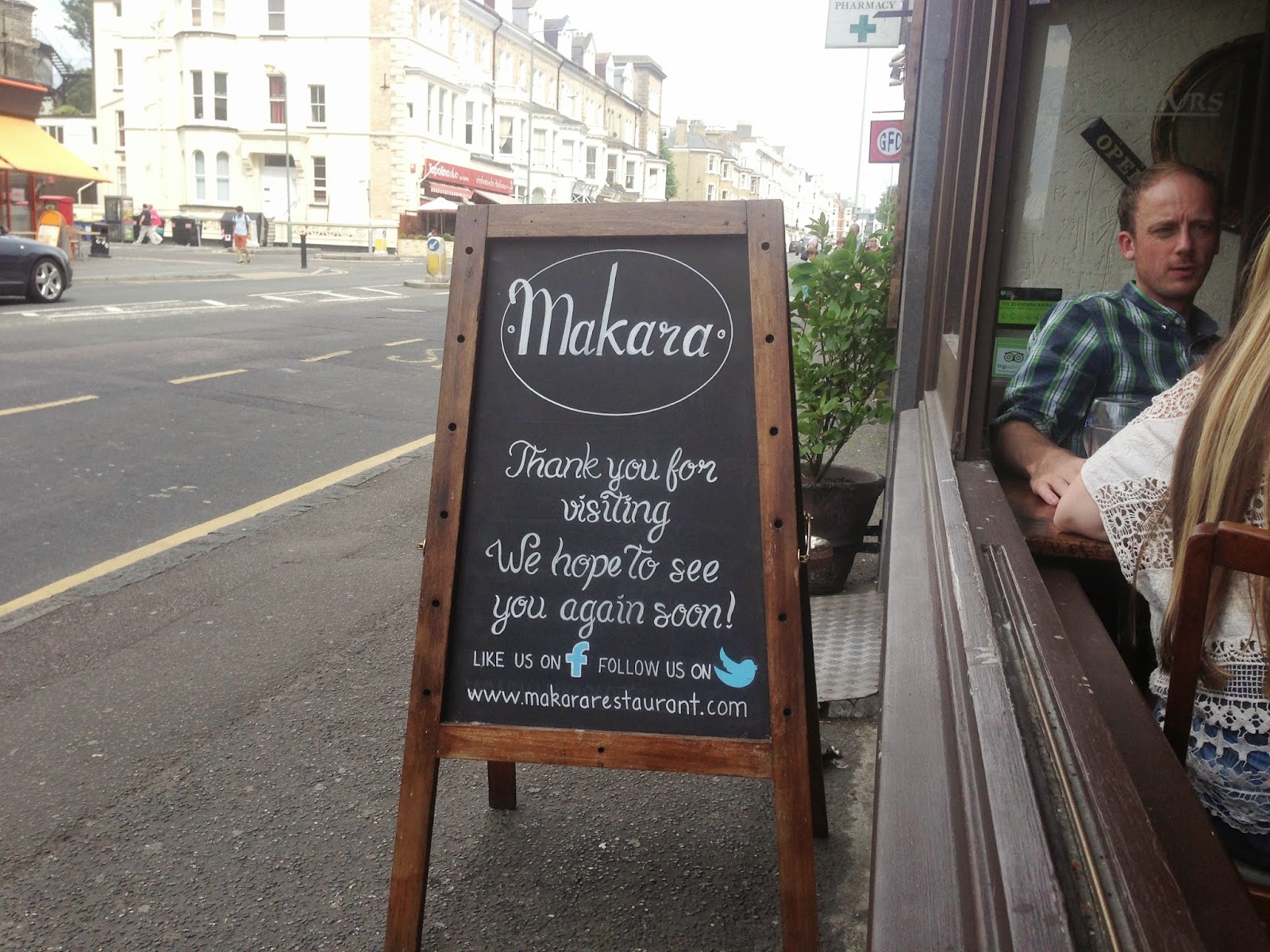 So on Sunday I was having one of those days, days which my Mother refers to as ‘this water’s far too wet and this grass is far too green’ days and I was being indecisive about absolutely everything. My friend Susie and I must have gone around in circles, whinging into our respective apple devices, for a good two hours.  I had a quick trawl of restaurants I follow on Twitter, and after a glance at their menu, I text Susie to let her know I’d be picking her up in 10.

It was about 4pm on a bakingly hot Sunday afternoon. There was only one table left by the open front of the restaurant, a table of 4, they happily let us sit there, despite the fact there was only two of us.  I’d say there were three or four other tables in there while we were.  The service was laid back and friendly, no complaints there at all.  Not overly attentive, but I wasn’t in the mood for that anyway, so it was just right.

I hadn’t really heard anything about this place until I put a shoutout on Instagram for new restaurants in Brighton to try, and two or three people suggested here.  I got it confused with Mascara at first, a similar sort of restaurant, but my friend had a dire meal there about 6  weeks ago, so it had dropped right down my to-do list. When I realised they were two different places and saw the menu, it was at the forefront of my mind again.

Absolutely delicious.  The lady serving us described it as a ‘bit like pitta bread’, I’d have to disagree, it was 10 times better than pitta bread, even if it had been grilled and smeared with butter (or maybe oil?) as this had. I’m not exaggerating when i say that I ate the best part of three of those baskets. Not just because it was free, but because it was so moreish.

These had an aftertaste that I just couldn’t put my finger on, like a more savoury version of cinnamon, if that makes any sense at all!?  Other than that, pretty unremarkable really. A good added bonus.

The menu described this dish as ‘Pureed aubergine with tahini, garlic and lemon juice’.. what it actually should have said was ‘Garlic aubergine with tahini, garlic, lemon juice and shitloads more garlic coarsely grated on top’. It was nice, but blimey, I usually avoid anything that garlicky like the plague. I asked Susie if I was just being a pussy, but she agreed, it really was the dominant flavour.

I’m not sure if I’ve ever admitted this on here, cos I actually feel embarrassed about it, it’s so feeble… but, I have an intolerance for garlic 🙁 I think I developed it after eating Pizza Express garlic bread and dough balls 5 days a week for almost 7 years.  I do still eat it, I just suffer for it the following day.

I love halloumi, not as much as my flatmate, who when drunk, has been known on numerous occasions to gnaw on raw blocks of the stuff during her walk home after a night out on the lash (Jenna you weirdo).  But yeah, I really love it, this was nice, it just would’ve been better if it’d been cooked on a griddle, as it was still a bit rubbery in the middle. I also don’t think anyone would disagree that it would have benefited from a slick of oil (like on the dip above) and some seasoning.  Definitely edible, just not all that. I’ve had much better.

This was the most disappointing part of the meal for me but it wasn’t even bad, again, it just wasn’t great.  The coating wasn’t unpleasant at all, it was just really dense, not sure what it was made from really, I’ve not had any like it at all, Susie only ate a piece of hers so I polished off the rest.  It was fine, I would just order something else if I came again.

Side note: The best calamari I’ve had recent was at La Choza, consistently good, decent portion size and the chipotle and lime mayo stuff with it was the perfect ‘bed fellow’ for the crisp and perfectly cooked baby squid.

This was Susie’s, I ate quite a bit of it as my main course (below) didn’t have any sauce. This and the meat, sat atop what seemed to be, more of the dip that we’d had with bread to start. The meat was nice, not at all tough, it didn’t specify which cut it just said ‘sautéed tender spiced bits of lamb over a velvety smoky aubergine puree with yoghurt and a hint of garlic’.  It was nice, she wasn’t overly enamoured with it I don’t think, but did take it home with her to eat later, I haven’t enquired as to whether or not she enjoyed it, I will do.

Standard fayre, zero dressing or seasoning and some of the bits of lettuce had seen better days, but it was fine, we didn’t finish it though. I’d have been disappointed if I’d have paid a few quid for it, rather than just as a garnish included with my main.

I wish I’d got a photo of the indoor grill that it was cooked on, it was only about 10ft away from our table in the window.  I ate all of it (obvs) but again, I just wasn’t mad about it. The cubes of chicken were a bit dry, but both cuts of lamb and the wings were nice, just fairly ordinary.

I think it would have helped if there’d been some sort of sauce or marinade or something, cos it was just a bit… I want to say bland, but that feels harsh, just a bit, yeah, ordinary. I did ask for some chilli sauce and they brought me some out immediately in a terracotta dish.  On closer inspection and a quick taste test, it seemed to be the same sauce that came with Susie’s main.  It wasn’t spicy at all, it tasted like a really thin, meat free bolognese sauce, not unpleasant, just not what I’d envisaged, or wanted.  I know nothing about Turkish food, so I just shut up and ate it.  The rice portion was just the right size and I may have troughed my way through another basket of flatbread during my main…

This was the absolute nuts.  I LOVE baklava, but it has to be the right baklava.  Stuff that’s fridge cold is gross, and other than an M&S and a Harrods version, I’ve never really found any pre-packaged that I get on with really.  This was lovely, again, rejected by Susie as it was ‘too sweet’, I had no such issues and practically inhaled it. I want more now. 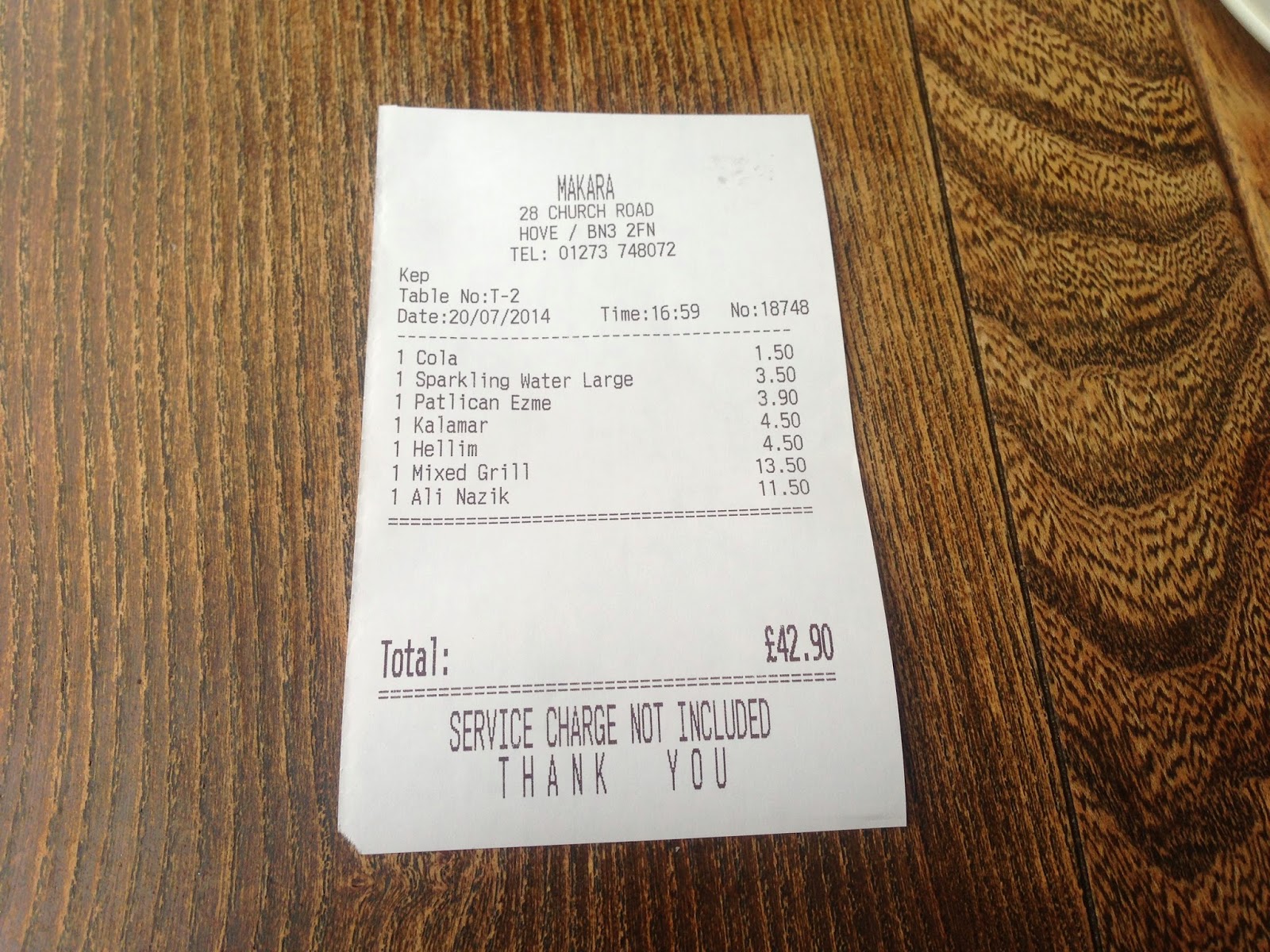 £42.90 was exactly what I expected to pay really.  I thought the touches like the free baklava, olives and bread made up for the price of the dips to go with it.  I think it’s pretty reasonable actually.  They may be the last ever restaurant to still serve warm Coca Cola from a large plastic bottle too (Susie’s not mine).

The interior was lovely, the open front made it even more attractive on a sunny afternoon and it was spacious and clean. The loos were also spotlessly clean and some of the nicest I’ve smell.  Is it weird that I have a restaurant lavatory hierarchy in my mind?!

Would I recommend it? If you fancy a something a bit ‘exotic’ to eat but you’re going out with a meat and two veg person, then this is probably a fairly safe bet. It’d be a good place to go in a group as well.  Would I go back?  I won’t be falling over myself to do so, but I certainly wouldn’t make a fuss if I ended up having to eat there again.

Have you been to Makara? What do you think?  Tweet me or comment below, I always love to hear what others think about restaurants I’ve eaten at x