The first I heard about Azaro was when they followed me on Twitter a few months ago, I followed them back, had a quick browse of their menu and added it to ‘the list’ of places I need to try when the opportunity arose, which it did this week. I tweeted in advance to book a table which they replied to immediately to confirm.

When we arrived there were tables available outside, so as it was a lovely evening and as my friends and I are avid people watchers, we snapped one up.  The boys were both delighted when an extremely pretty girl decided to walk around with her boobs out in one of the flats immediately opposite, and as we hadn’t seen each other for a while, being outside meant we could be raucous in a way that wouldn’t have been appropriate indoors. After having a bit of a miserable week, laughing until my eye makeup ran was exactly what I needed.  We all used to work together at the Sea Life centre and have known each other for six years and we’ve been laughing together, usually at everything we shouldn’t, ever since.

Their website is fairly basic, but lists the full menu in a readable format (tick) but they’re worth a follow on Twitter for daily updates and photos of their thalis and other signature dishes too. 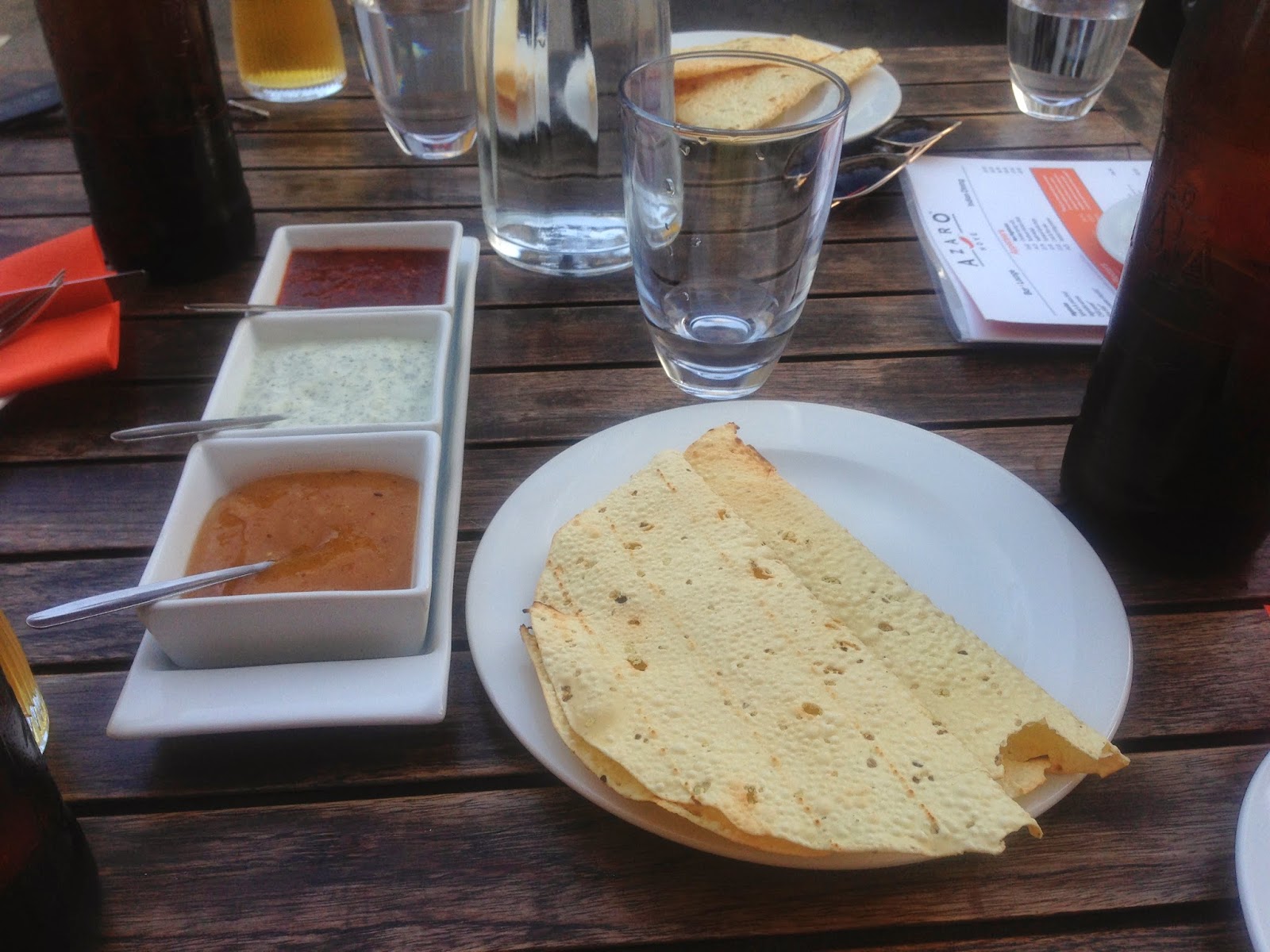 While we had a browse through the menu we had some poppadoms and chutneys.  The latter were lovely, but the poppadoms definitely weren’t as crunchy as they could’ve been… I tried some of the boys’ ones too, just in case I had a rogue one, but there’s weren’t the nicest too.  The chutneys were lovely though, I particularly liked the mango one which had a lovely aftertaste of aniseed.

The lady looking after us was incredibly friendly and helpful when it came to suggesting menu items and even helped me try to bully the boys into have the other of the two dishes I was torn between.

I’m not going to beat about the bush, this place is very expensive*, in some cases, laughably so. £10.45 for a Sag Aloo…. really guys!?!  Having eaten at both the Curry Leaf Cafe and Chilli Pickle recently, I can say with authority that this place is definitely more expensive than both… but is it ‘worth it’?! read on….

*I’d just like to add a bit of a disclaimer, I abhor tightfistedness, and I’m more than happy to pay ‘top dolla’ for food, it’s definitely my biggest outgoing each month. I also totally understand that every business has overheads and needs to make a profit, but I think they are going to deter a lot of people with what they charge.  This said, the level of customer services absolutely matches the prices.  Everyone looking after us deserved a 10/10.

We decided to go for one of the platters to share to start as it had a nice mixture of things from the starter menu.

The chicken was the star of the show, tender and nicely chargrilled this was the favourite dish for all of us.  The fishcakes were nice, but they were far from generous with the amount of crab and the over-riding tastes were fish and potato.  The spring rolls were a bit meh and the lamb was OK, just nothing to get excited about.

I’ve been hankering after another biryani since the absolutely incredible one I had at Chilli Pickle last month, I was torn between this and the Goan prawn curry, but I think I picked the winner.  It really was delicious, I love the fact that it came in ‘pie’ form, there was a generous number of plump, juicy prawns and just about the right amount of sauce and raita to go with it.  I would highly recommend it, even for £15.95…

The owner of the restaurant (I think her name was Katie) brought out our main courses and introduced herself as well, cos she recognised me from Twitter.  She was honestly one of the loveliest people in the restaurant scene that I’ve met in a while, so lovely in fact I feel bad criticising anything about the restaurant at all!  She even brought us out a little street food snack between courses as well as some traditional Indian sweet tasters too- I did get photos, but for some reason Blogger is being a prick today and won’t let me upload them which is pretty infuriating.

This was Dan’s, he really liked it, it tasted nice, but I absolutely loathed the consistency of the sauce, it was really… mushy.  Obviously I didn’t say that to Dan, one of my absolute pet hates (after going out with some one who did it all the time) is people making negative comments about your food while you’re still eating it, and furthermore, enjoying it. It is the absolute height of rudeness in my opinion and seeing as the person who’d ordered seemed to like it, I kept schtum.

At £12.45, with a thimbleful of rice and no mention of it being free range chicken, I thought this was fairly pricey

I’m starting to feel like a bit of a tight arse, complaining about the price of every item… but 7 QUID FOR A BREAD BASKET- what kind of insanity is this!? It was nice, but not that nice.

When I visited Makara a few weeks before, they brought out basket after basket of entirely complimentary bread, which was arguably just as good as this.  Touches like that go a long way, it only costs them pence yet it’s the sort of thing you remember.

This was Adam’s but he let me have one of the meatballs, and it was nice, really moist in a way that is often lacking in mince based dishes, they were miles better than the lamb that came with the starter platter.  This photo makes the sauce super oily, it was a tiny bit but once you gave it a stir it just melted into the rich tomato and onion gravy. 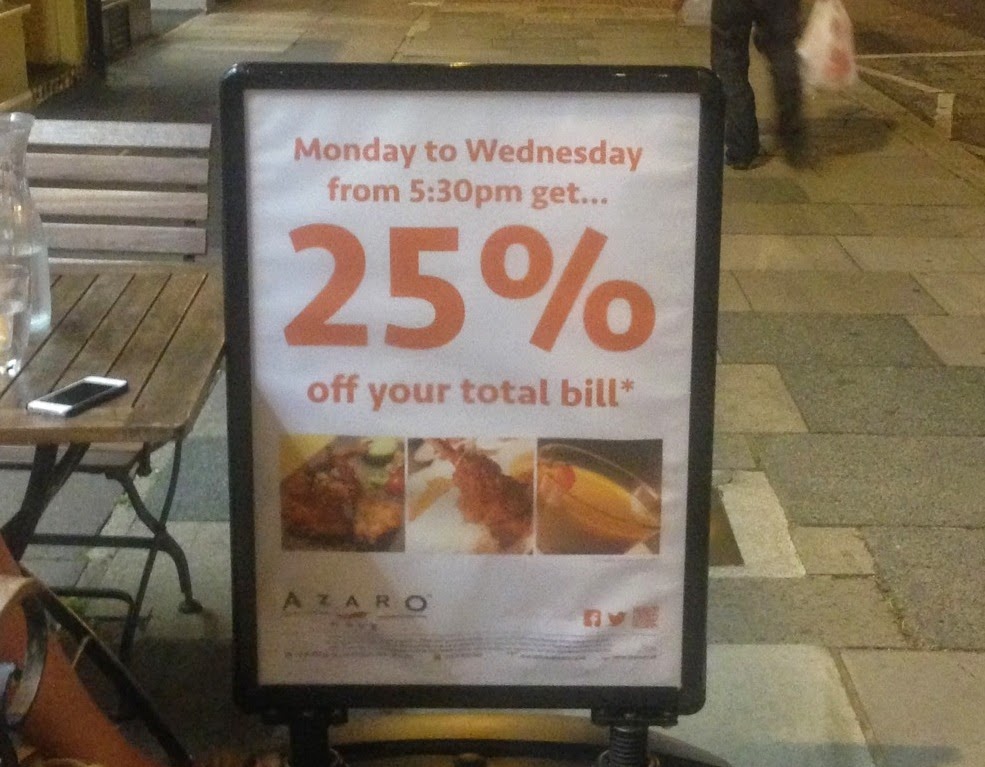 I don’t like to end on a negative note, especially given how well looked after we were and what a lovely evening we had.. but, take a look at the above poster. I think it is INCREDIBLY misleading, rather than it being your ‘total bill’ it was actually just off your main courses… it is written in the small print that starters, sides and drinks aren’t included, so why not just put ‘25% off your mains’?! Naughty.

So yeah, imagine our surprise when our bill came out and it was in excess of £100. On closer inspection we discovered they hadn’t actually applied the discount to it, so we queried it, they apologised and sorted it, the revised total was £92.  If it had been 25% off the total then I think that would have made the bill just about right, but as it was, it left a bit of a bad taste in our mouthes. 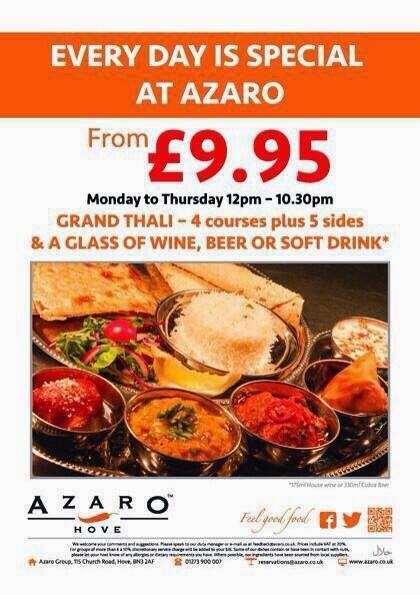 NEWS JUST IN: When I was getting the link for their Facebook page I stumbled across this flyer. We weren’t told about this offer, but had we have been, I’d have definitely gone for one of these and I’m pretty sure the same would go for the boys.  So yeah, if you’re after a more affordable, whilst still large and with a lot of variety, then this is the one for you I reckon.

In summary: exceptional service, nice (in the most part) food, lovely interior and an interesting menu, but, punching well above their weight in terms of price point.  Better than a lot of standard curry houses, but a good league or two below the likes of Curry Leaf Cafe and my beloved Chilli Pickle.

Have you been to Azaro?  Am I being too harsh about the prices?  Tweet me or comment below x