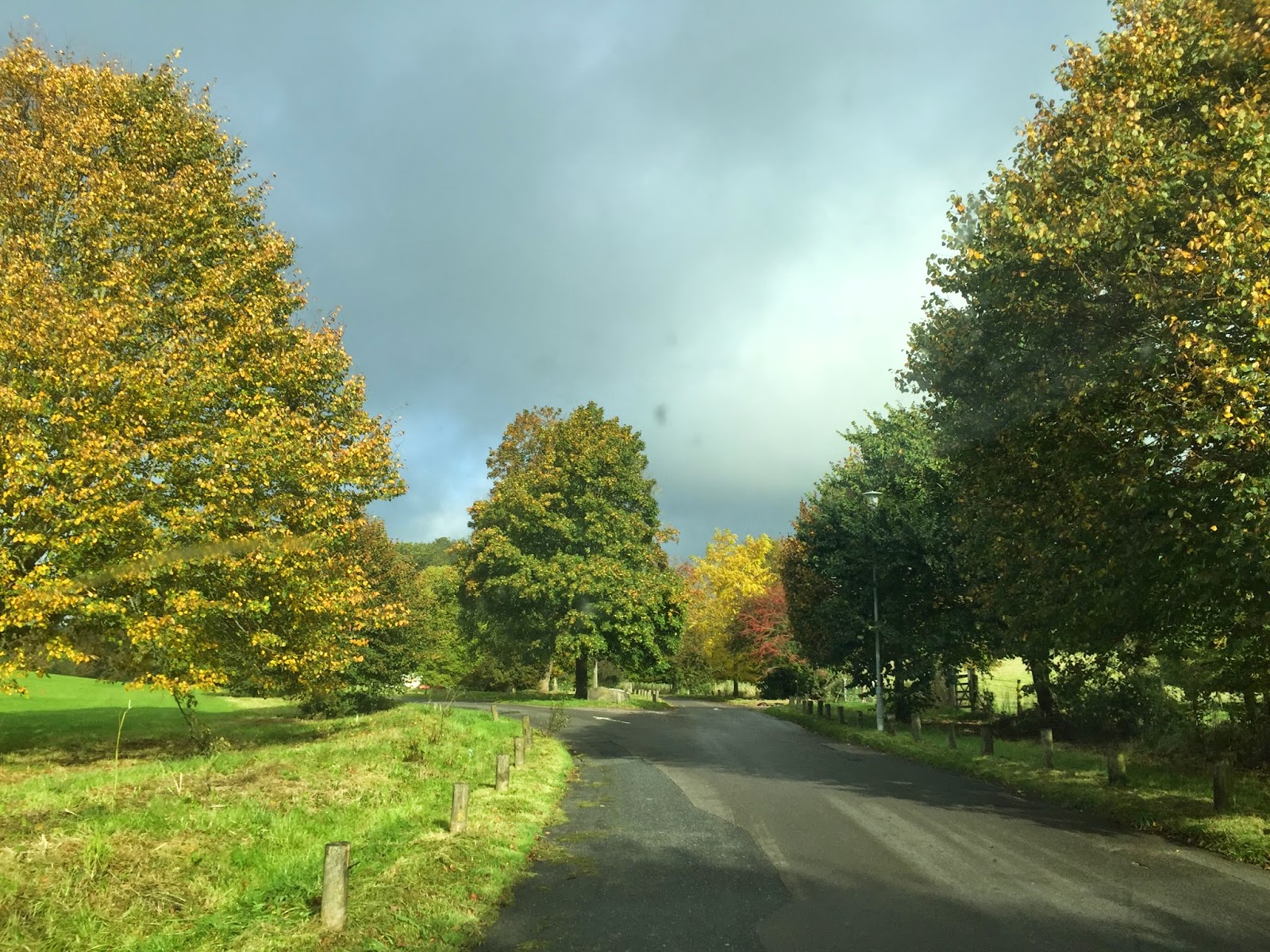 This is the second time during this round of the roast challenge that I’ve felt compelled to write a venue its own individual post. But seriously, I had written two thirds of this review during my meal and then for another ten minutes in the car park too. The last time this happened was as the result of an absolute horrow show, this was far less dramatic, but in some ways, far, far more disappointing.

The above photo was actually taken in the Autumn when I came to Stanmer House for tea and cake.  Isn’t it beautiful? Doesn’t it make you feel optimistic about what is at the end of the beautiful tree lined driveway through the park? I’d been before that when it was used for the VIP area for Shakedown festival. I’d never had a full meal there, but their Victoria sponge was incredible so I had high hopes, even more so after I got a few tweets and comments recently suggesting it. I woke up and decided today was the day, calling in advance to see if they could fit me in, but they said I should just turn up and it was done on a first come first serve basis.

As soon as I arrived the early signs weren’t good. The very nice Manager (more on him in a bit) told me there was a table coming up over by the wall and to go and pounce. Some guy tried to cut me up and swoop in on it… it didn’t go well for him.

Once I was seated I was left for 10 minutes without even successfully making eye contact with a member of staff, when I finally did and asked for a menu, she disappeared, never to be seen again. When I eventually got a menu (another five minutes later), the waitress left me for yet another five minutes, only to come back and tell me that the kitchen was stopping serving food for 1/2 hour and that I’d have to wait. I asked if I could have a coffee and a mixed roast once the kitchen was reopen, she said I could have a coffee and remind her when half an hour was up.  The Manager from earlier on walked past and saw me and asked if I was still waiting, I politely told him what had happened and said the whole thing was a shambles. He was so nice and apologetic I immediately felt bad for having felt so pissed off. I’ve been there, I know how shit it is working in hospitality on a Sunday, even more so when you’re getting absolutely shafted. I also knew that me having a moan up was the last thing he needed, so I kept it calm and just prayed for a better result with the food to redress the balance. Unfortunately for them (and me) this was not the case. Although the meal came out within about 20 minutes of his intervention, funnily enough he didn’t come back to see how my meal was… He was ever so nice though, I wouldn’t want his job. 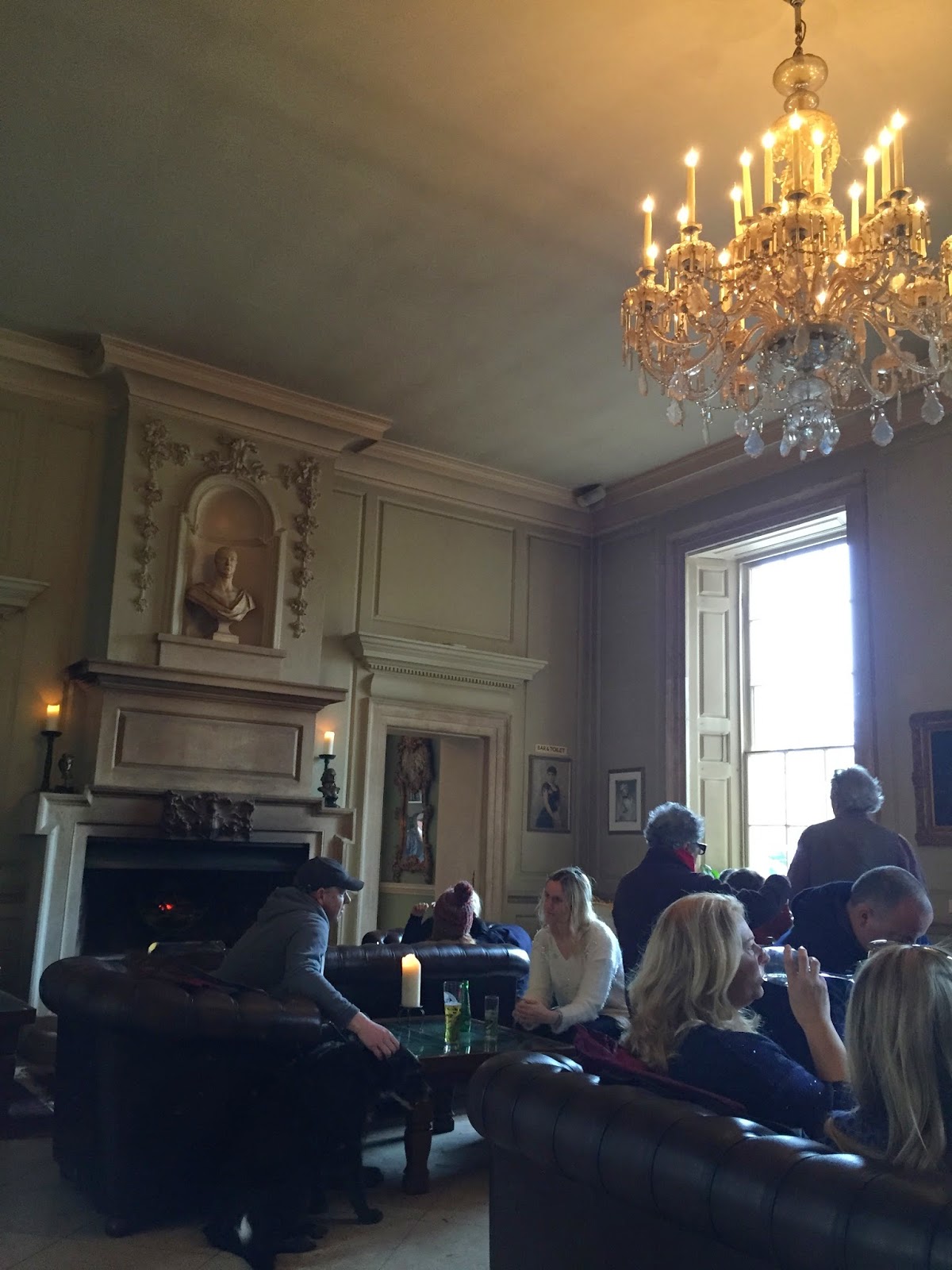 Absolutely rammo, full of expensive looking dogs, groups of people and families, with a constant turnover of the tables. They were getting SLAMMED, but I can’t imagine it was different to any other Sunday, you didn’t get the sense that either the kitchen or the front of house had stuff ‘locked down’ at all, it just felt entirely chaotic. Since posting a photo on Twitter earlier three or four people told me they’ve had similar experiences recently. Oh dear Stanmer House… 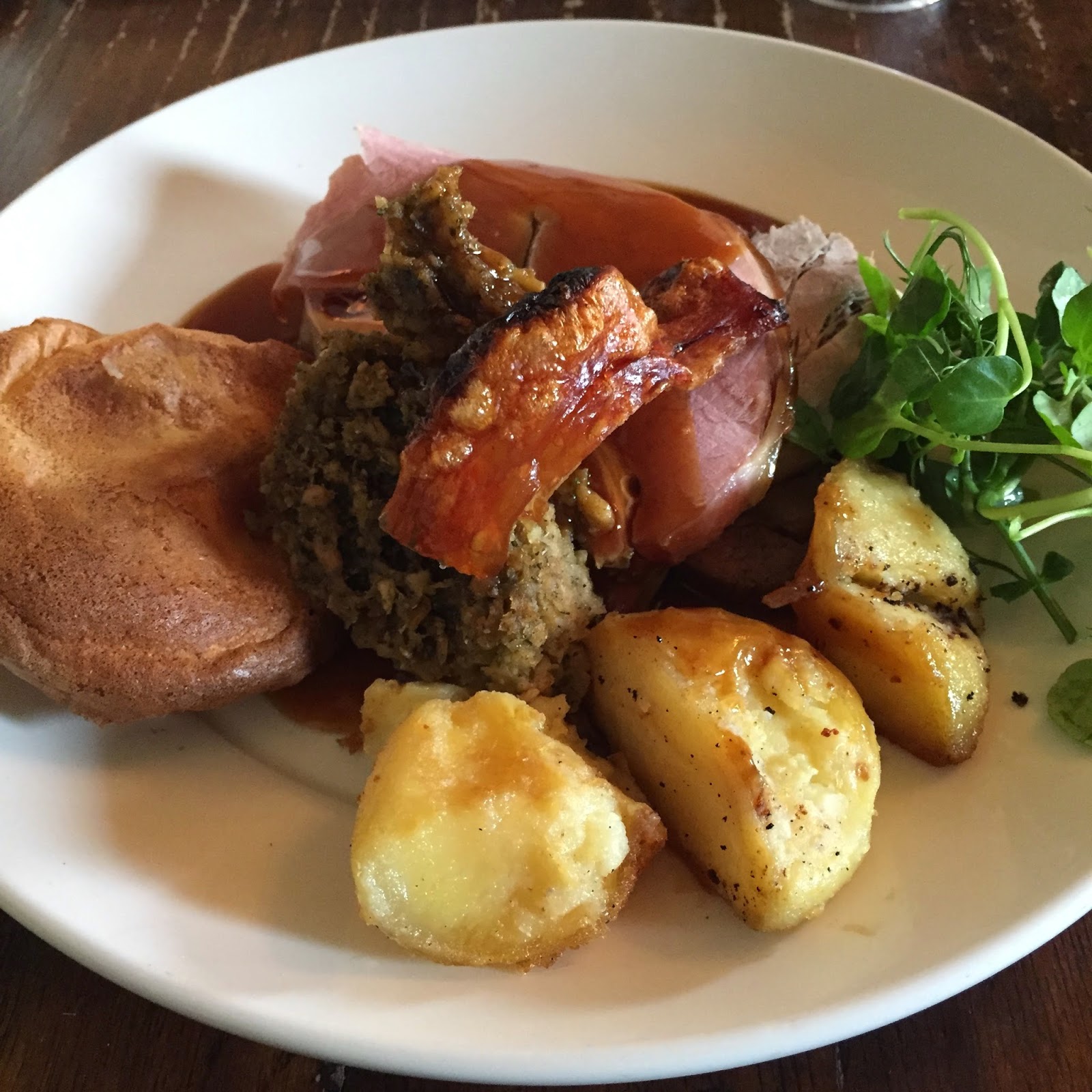 If I’d been at a Toby Carvery (LOLs) and paid £8 for it, I’d have judged it accordingly and probably been quite pleased with the offering. I know Stanmer House is also now owned by a chain, but given its beautiful surroundings and £15 price tag, you’d think they might at least try to do a bit better.  Maybe that was what whoever garnished my plate of meat with watercress was trying to do, some sort of painful attempt at being ‘fancy’?  Either way, it was weird.

The photo actually makes it look loads better than it was. Not that there was anything catastrophically wrong with it, but it was just.so.weak. Especially when I put it against the mixed roast (of the same price) from The Royal Sovereign pub, during the last round of the challenge. Photo below so you can compare and contrast, there was also a big dish of cheesy cauliflower and broccoli (not pictured) included in the price too.  I think we’ll all be in agreement about who the winner is. 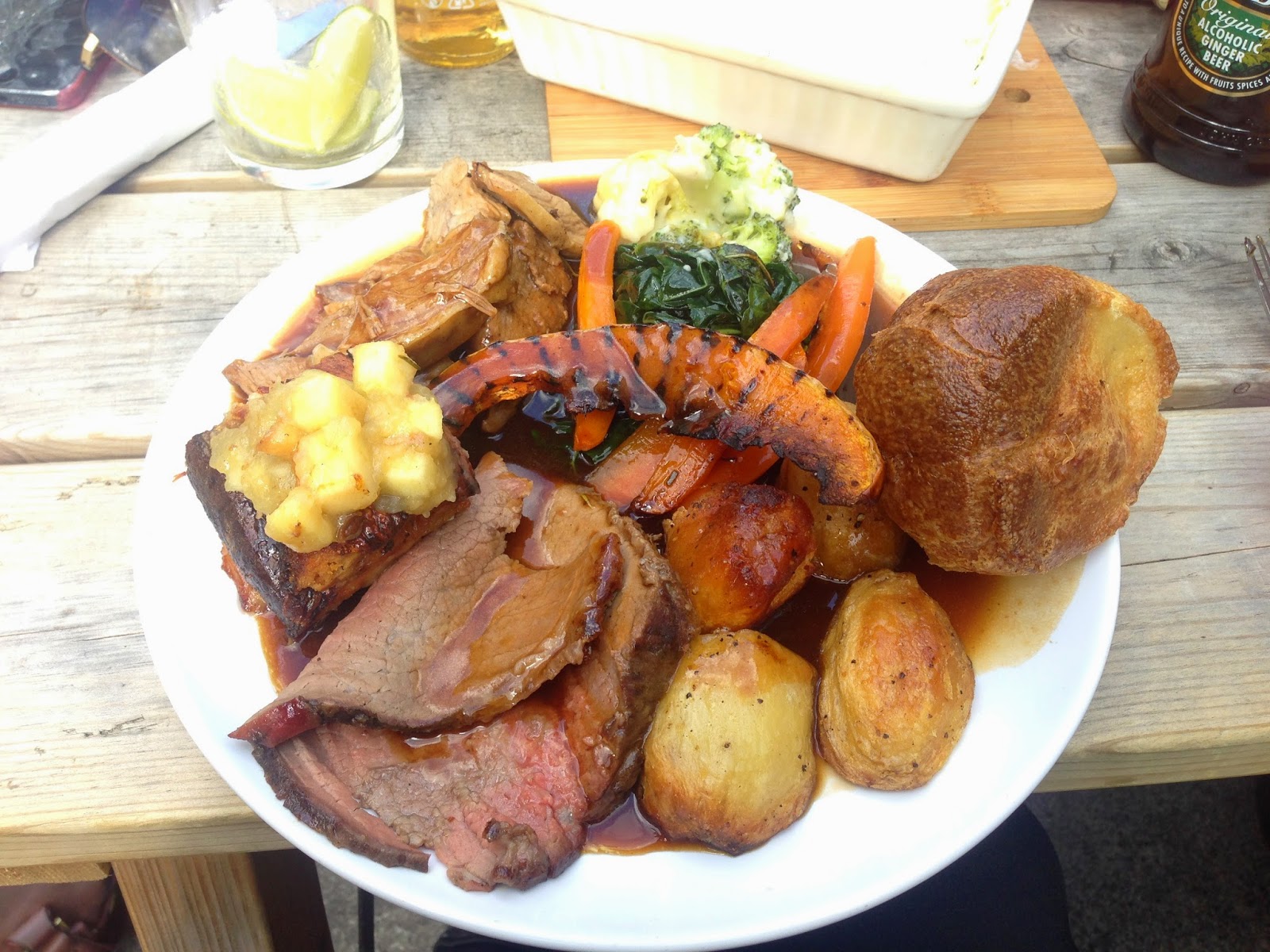 The potatoes were meh but the rest was spot on 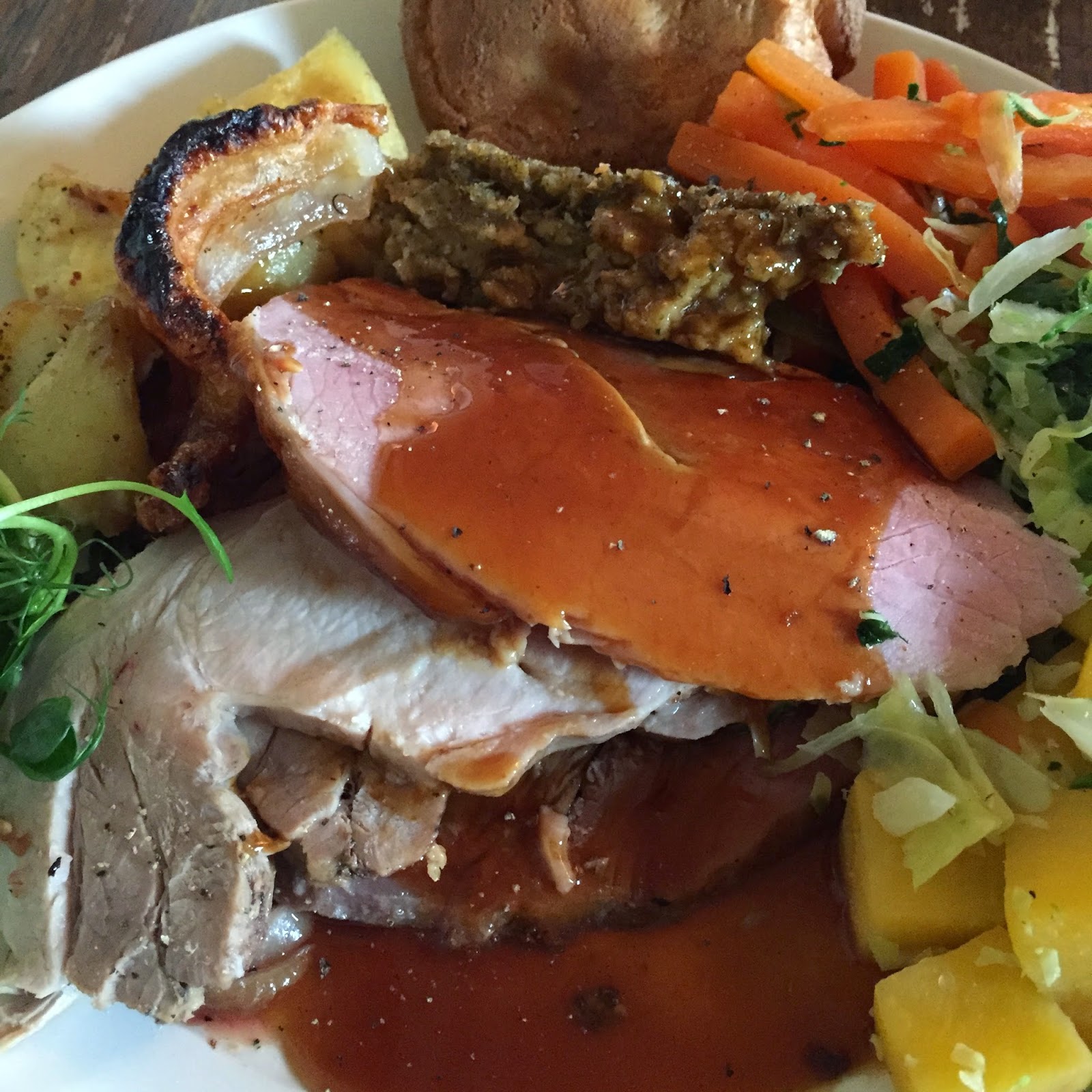 It took me back to my school days, specifically to ‘dinner times’, don’t get me wrong I used to clear my plate every day, but I certainly wouldn’t have paid £15 for it.  The above was edible, well, in the sense that I ate it, but I couldn’t say that any element of it had been cooked or served accurately.

The tiny little slick of gravy had a distinctly bisto-esque ring to it, although this would be an unacceptable amount under ordinary circumstances, one taste told me I wouldn’t have wanted any extra. Half of the crackling was passable and the other half was chew-y. The pork was tough, beige and a bit slimy and the gammon, dry, so dry, it all of a sudden made me grateful for the previously maligned dribble of Bisto.  I suppose they get half a point for at least attempting to make their own Yorkshires, despite the sorry state of them. Better than Aunty Bessie’s though.

If I absolutely had to praise any one aspect of it, I would grudgingly say that the beef, despite being on the well done side of medium (and of a slightly greyish hue) was surprisingly tender. The best of an extremely questionable bunch. 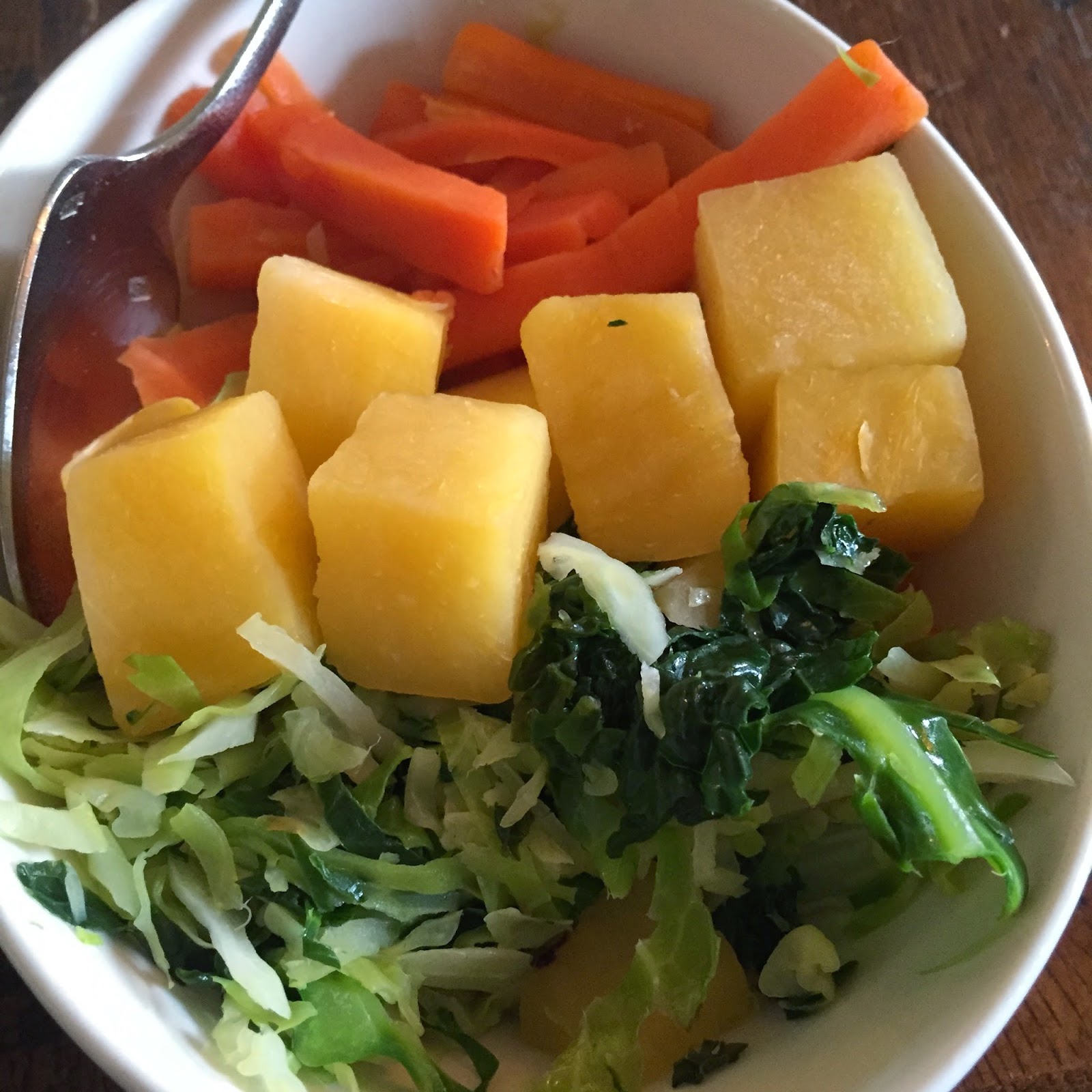 Unseasoned and uncared for veg, so steamingly hot from it’s bout in the microwave I had to leave it for a few minutes before grinding salt and pepper over it liberally, to give it some semblance of flavour. With some butter, it’d have been fine. Boring and unimaginative, but fine. 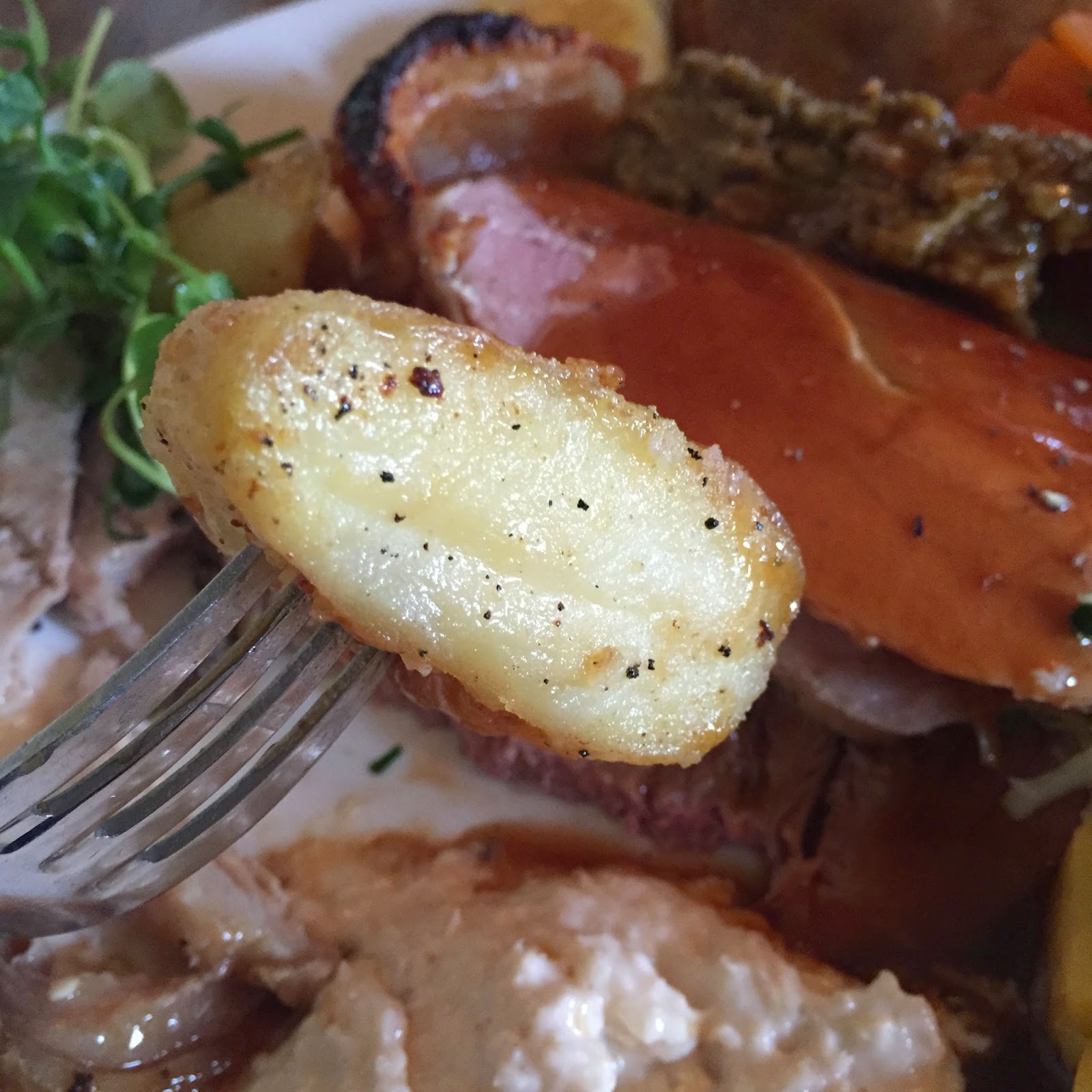 The roast potatoes, now what can I say about them? Well, they did indeed taste of the promised garlic (not too sure on the rosemary) but other than that they were a complete waste of time really. They’d blatantly been boiled within an inch of their lives, before not being cooked for long enough, in oil that quite clearly wasn’t the smoking hot temperature required to get a decent roast potato. The outsides were sweaty and oily and the innards were powdery and almost grainy in texture. 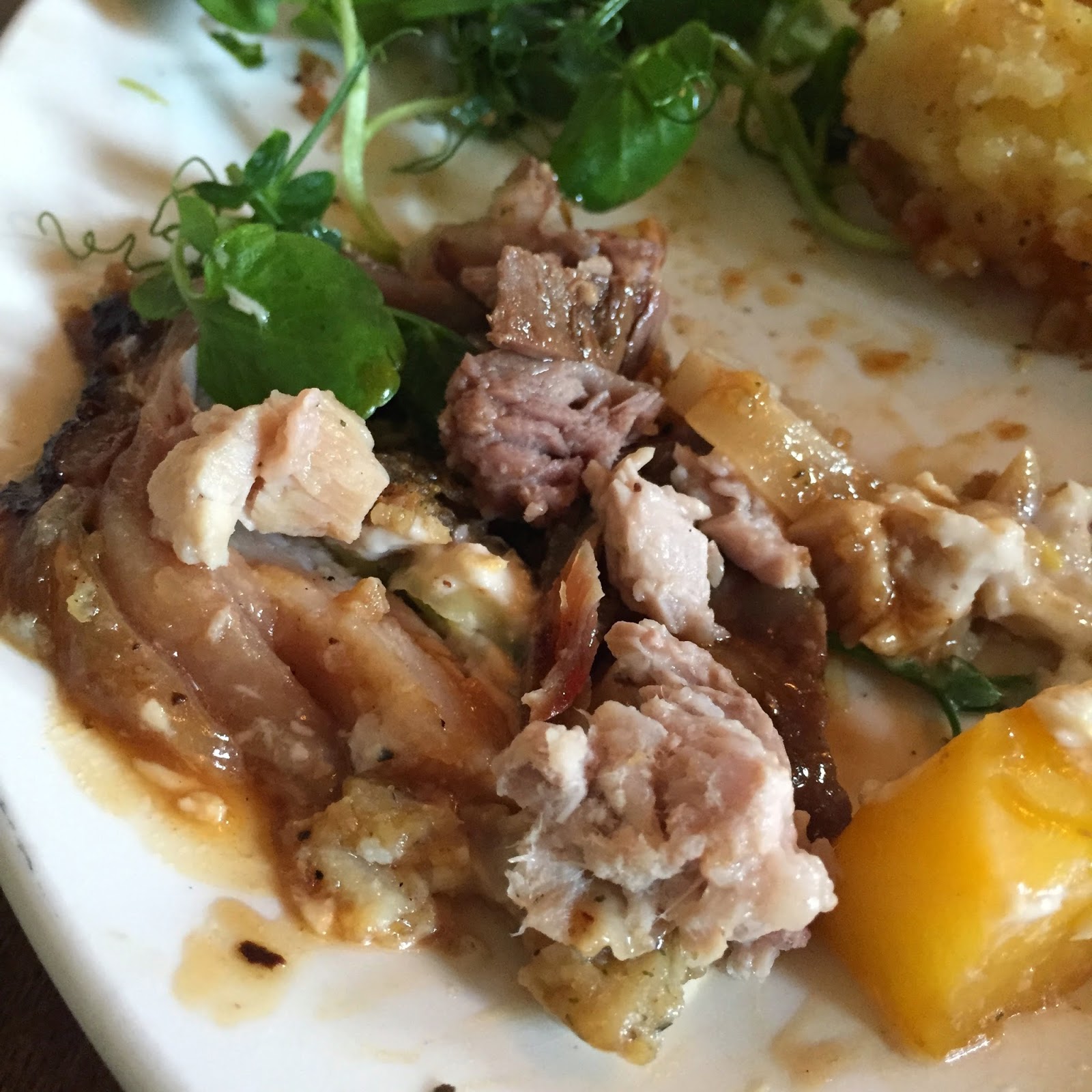 I am not one who shies away from fatty meat, good fatty meat that is. But sadly, this sorry little collection at the side of my plate was not the good fats, it was the chewy, indigestible, slimy kind, that only the mediocre cooking of low quality meat, yields. So very disappointing. When the waitress took my plate she merely enquired whether or not I was ‘all done’, she didn’t ask how it was, despite there being lots left on the plate. I don’t blame her really, she was probably busy mentally calculating all of the tips that the kitchen were losing her, and the hours, minutes and possibly seconds until the end of her shift. I would’ve been too in her position. 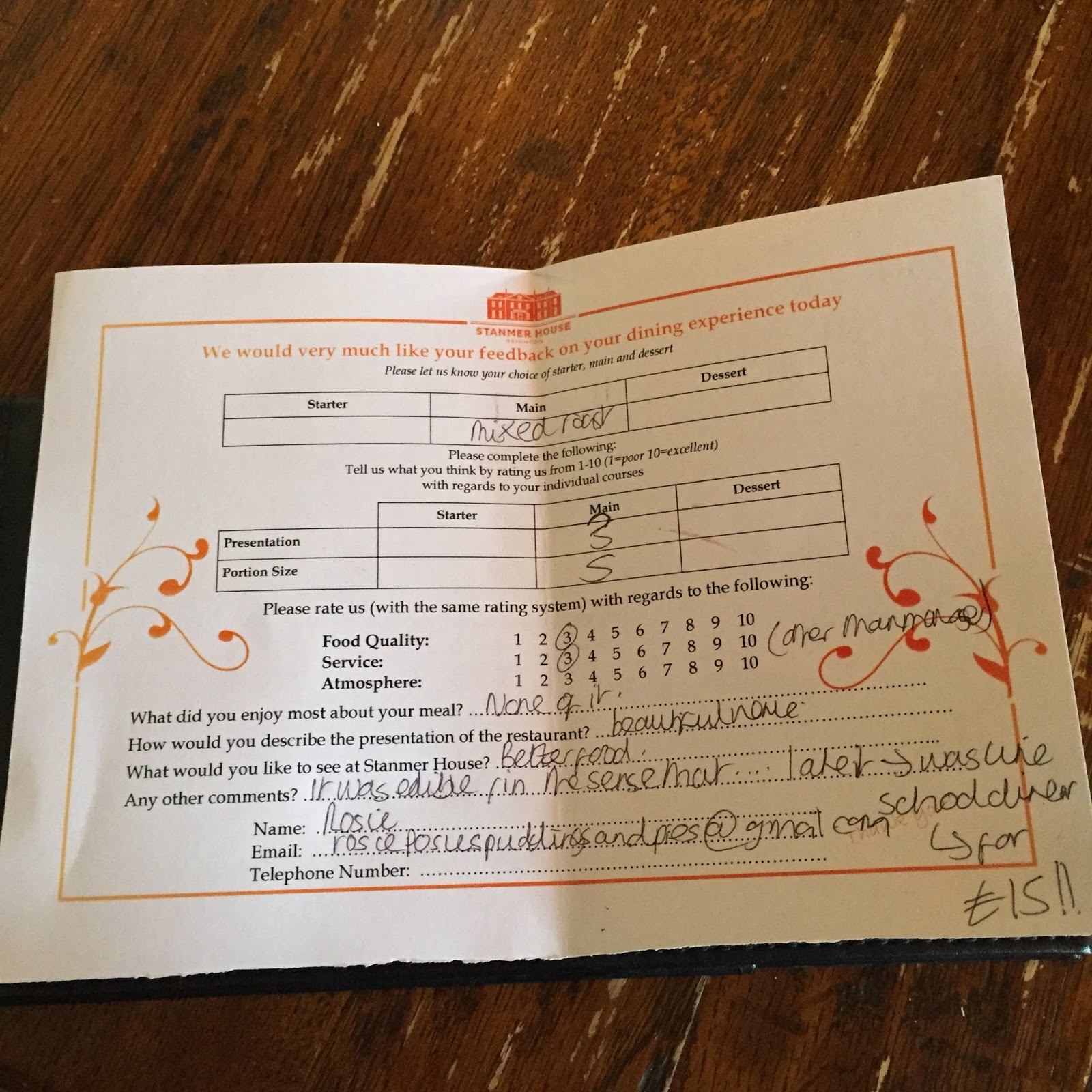 More places should have these…

Heaven only knows what possessed them to slip a feedback card inside my bill holder, it was very clear I hadn’t enjoyed myself. I really do love the venue though. Such a shame that the food and service isn’t up to scratch, but then, I suppose it doesn’t have to be, it will always have a steady stream of dog walkers, tourists and people who are happy to pay for a bog standard roast in beautiful surroundings. But for me, the picturesque surroundings made the food and service seem even shabbier. I wouldn’t go back for anything other than coffee and cake.

In my hurry to leave, I forgot to do toilet cam! I don’t suppose it makes a difference really, and it might have sent me over the edge if that’d been dreadful too.

Have you been to Stanmer House? What did you think? Where shall I go for a roast next? On the list is The Foragers, The Basketmakers, The Jolly Poacher, The Park Crescent The Yeoman (if they’ve sorted their 1/5 hygiene rating) and a revisit to . Comment below or tweet me x

Being the sort of girl who likes to share her experiences , I posted the review across my social networks…… 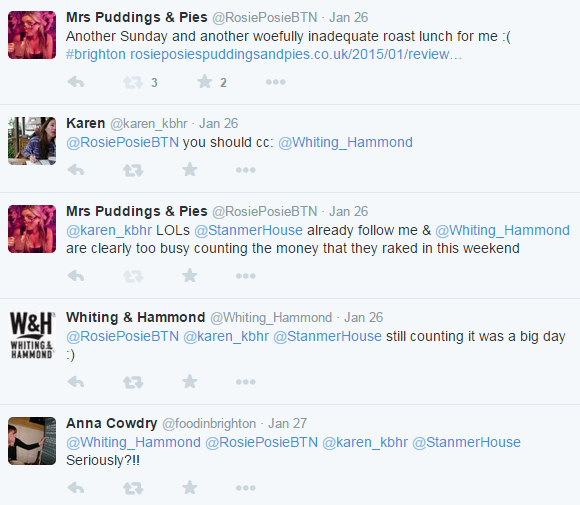 For the remainder of the day my phone lit up like a Christmas tree with people tweeting about how disgraceful this response was. That was all the owners had to say, and Stanmer House’s only response was to unfollow me on Twitter. No one ever contacted me about my feedback card either.

So reading between the lines, sloppiness and total disregard for anything other than profit, is embedded in the company from the top down. The public laughing in the face of all the paying customers, just shows that their management are as tasteless as the food is, which quite frankly, is a remarkable achievement.