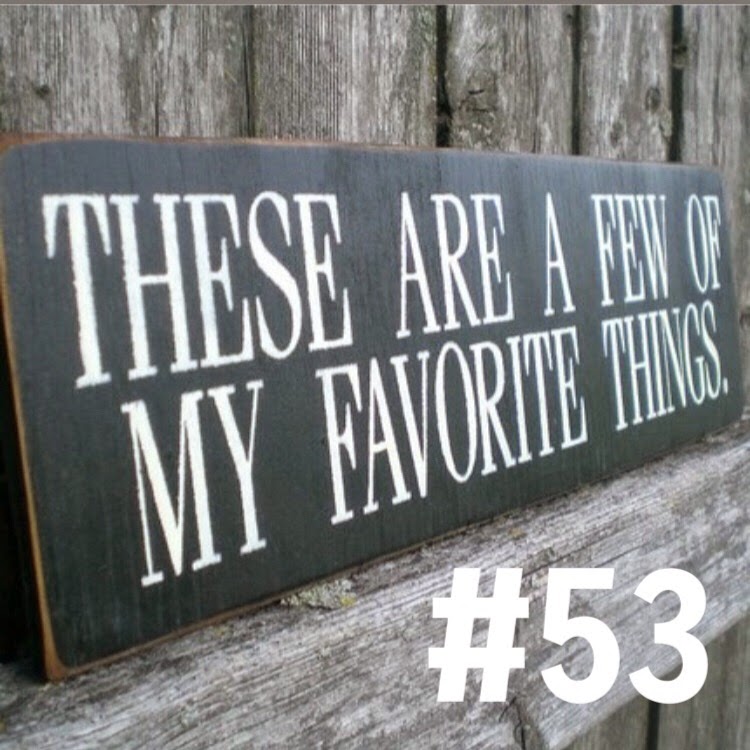 Other than some extreme unpleasantness with my freakshow neighbours, this week has been jolly nice indeed. The weekend has been the perfect mix of work, play, food and friends. Not enough sleep though so the beginning of the coming week is going to be spent catching up on that.

I’m typing this from a venue that lots of you recommended to me for a roast, and I’m not gonna lie- the early signs aren’t looking good. I won’t write it off altogether until I’ve seen the food though…

After this I’m going home to do some serious blog post writing/scheduling. My other commitments have meant that I’m not as ahead of the game as I’d like, but it’s nothing that a few hours of focus and laptop time won’t sort out. I’m pleasantly surprised at how long my New Year motivation is lasting. 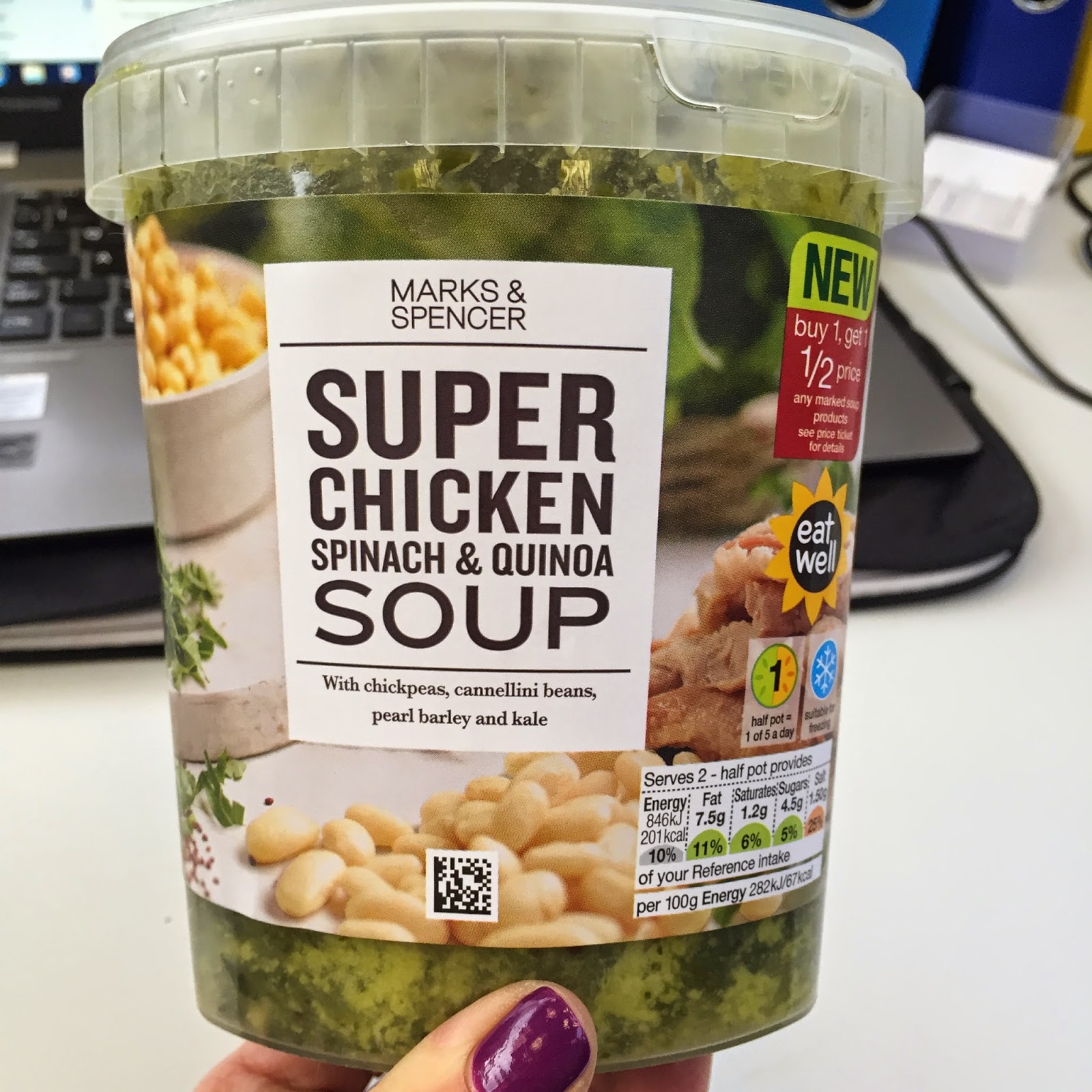 One of the many things that M&S absolutely nails, is their fresh soups. I know it’s lazy not to make my own, I do sometimes, but with these on offer almost constantly and a particularly good M&S food dangerously close to my work, more often than not this is what you’ll find me eating at my desk come lunch time. I showed unreserved love for their Christmas soup, and I can highly recommend the above as well. Really bulky too so actually does fill you up, 2 for £3.75 at the moment. Get involved. 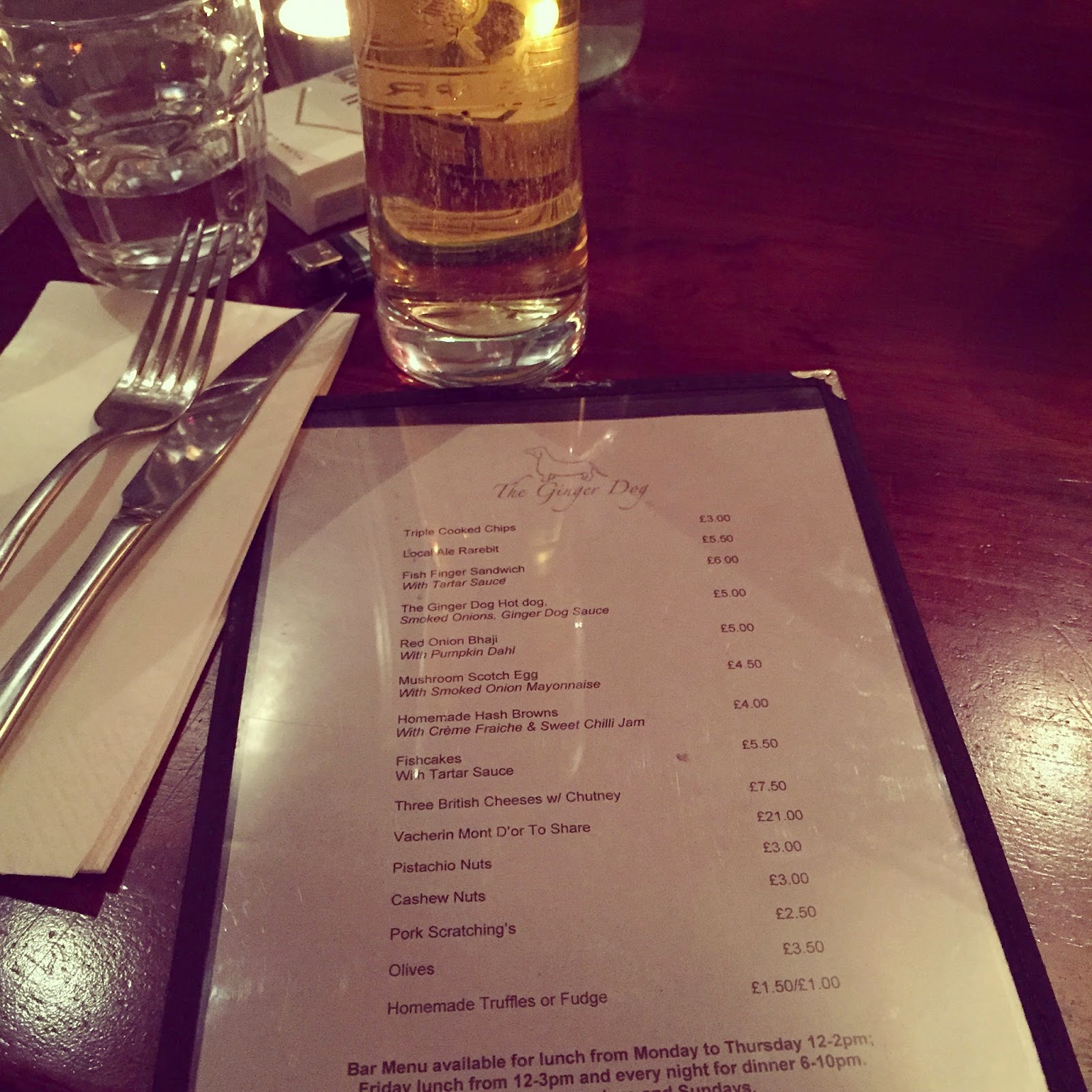 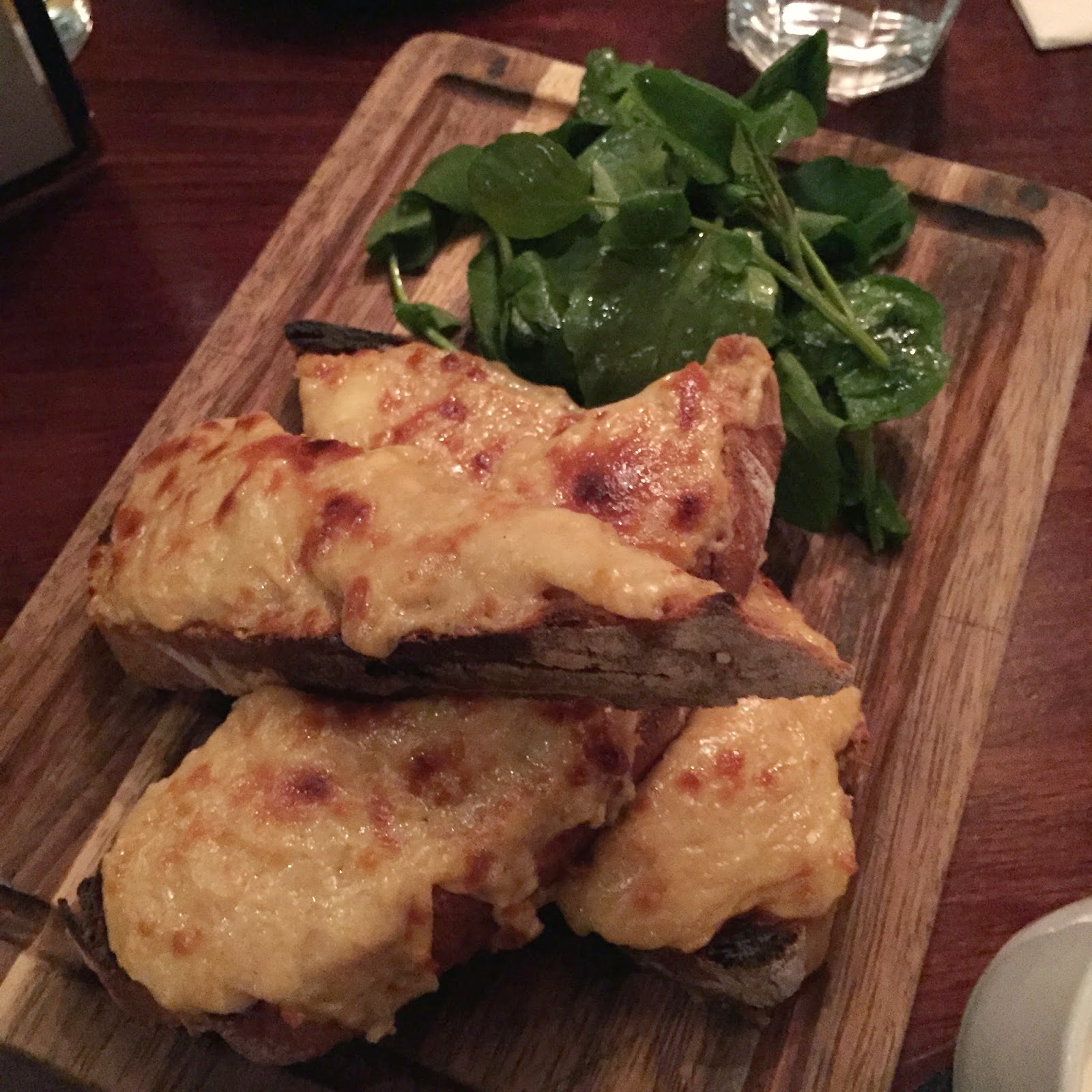 On Monday evening my friend Fran and I, attempted to take our next round of the pizza challenge to somewhere pretty much on our front door steps, The Woodbox, a pizza van which ‘pops up’ at a pub in Kemp Town. You can imagine our disappointment upon turning up to discover that they’d sold out and gone home for the evening- another classic example of how important the use of social media is in this game. Anyway, I digress…

We sought solace in our local ‘Ginger’ venue, the Ginger Dog. We both ordered the dripping chips and me the local ale rarebit. I really enjoyed it and as ever the service was lovely. I really like the bar area, despite there only being a couple of other tables in, there was a nice vibe.  Its older sibling, The Gingerman has had a revamp and I can’t wait to go in there for a full on meal, ASAP. 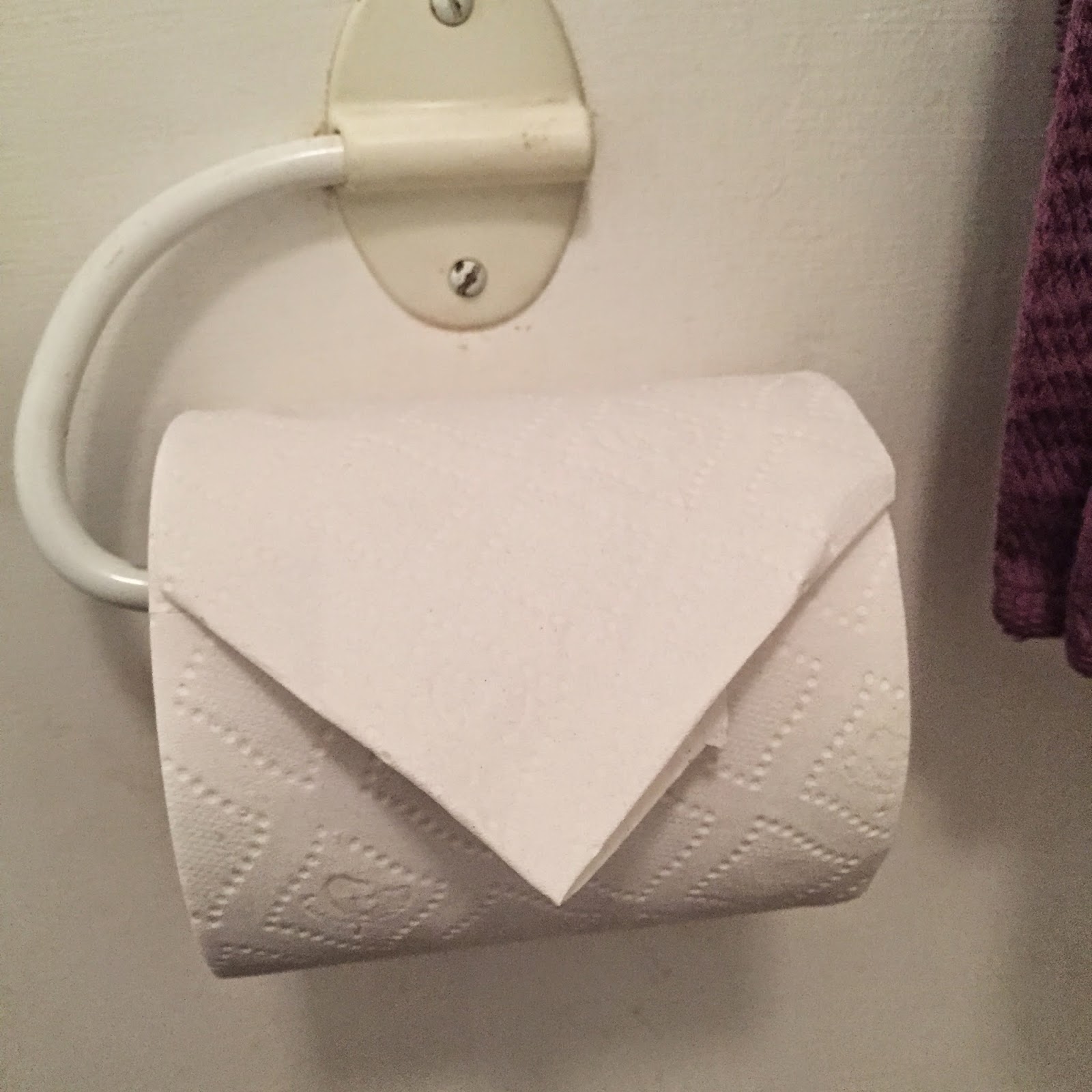 Our household New Year’s resolution was to get a cleaner, and soon as the words were uttered I took to Twitter to try and find a recommendation. My prayers were answered by a kind gentleman almost immediately with a number and a glowing reference to boot. Sam, otherwise known as ‘Saint Sam’ and also ‘the carpet whisperer’ has turned Tuesdays from ‘meh’ to ‘aaaaah’. He comes for 1.5 hours a week and does the kitchen, bathroom and communal spaces, and he does it bloody brilliantly! The triangulated loo roll is just the tip of the iceberg. I know that he’s got spaces for a couple more clients so if you’re Brighton based and in the market for a cleaner, head over to his Facebook page and give him a shout. 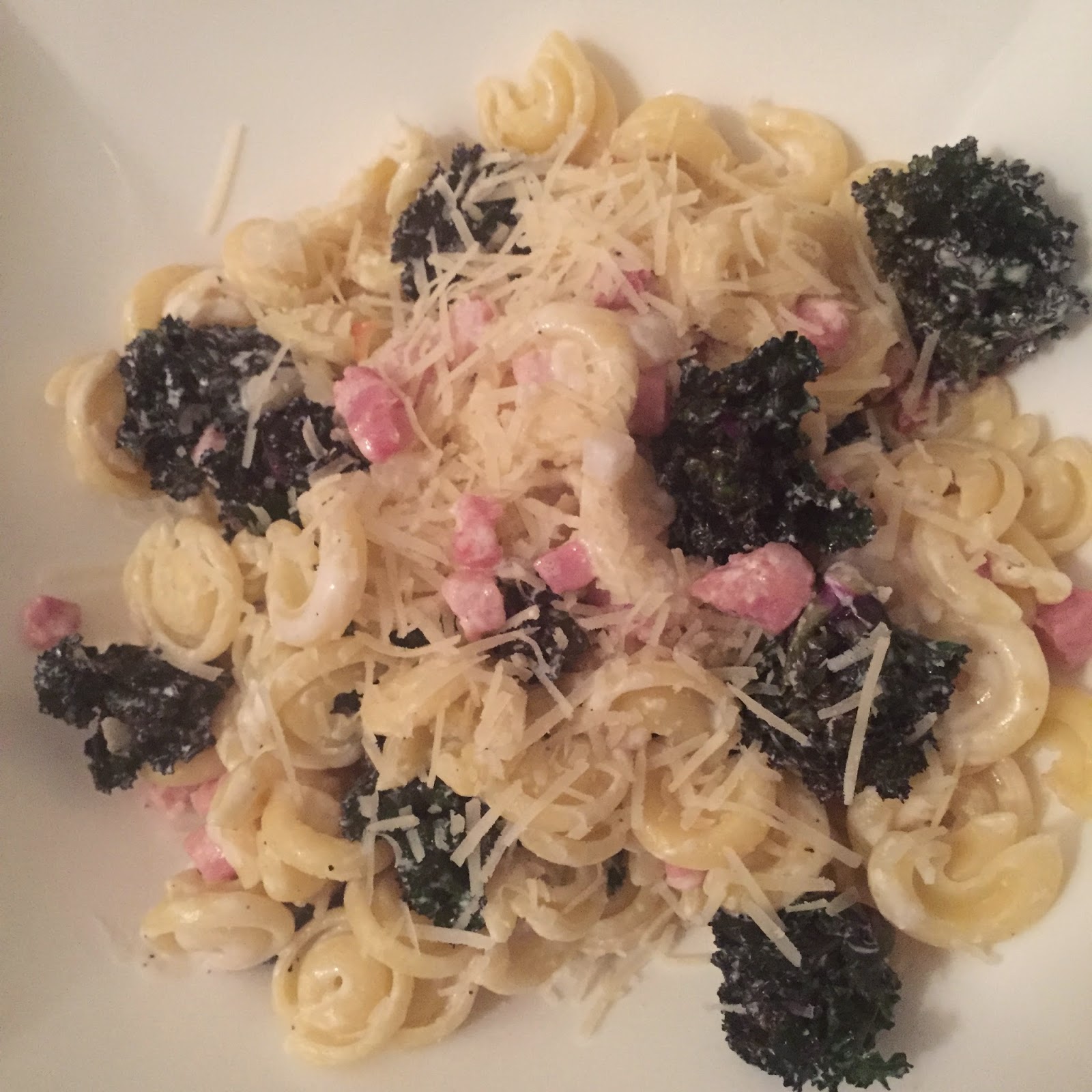 I picked up the inspiration for this little beauty from the Borough Market twitter feed and it actually turned out to be a recipe from a food blog that I’m very keen on- Rocket and Squash. For those of you who aren’t familiar with flower sprouts-think kale crossed with sprouts and you’re nearly there, mixed with mascarpone, pasta, garlic, onions and lardons they make a lovely midweek meal. It was lovely, as were the leftovers reheated for lunch the next day too.

It’d be nice with savoy cabbage if you can’t get your head around the idea of eating anything sprout-related/can’t get them, but they’re in most supermarkets and I’m sure decent greengrocers and markets will have them too. 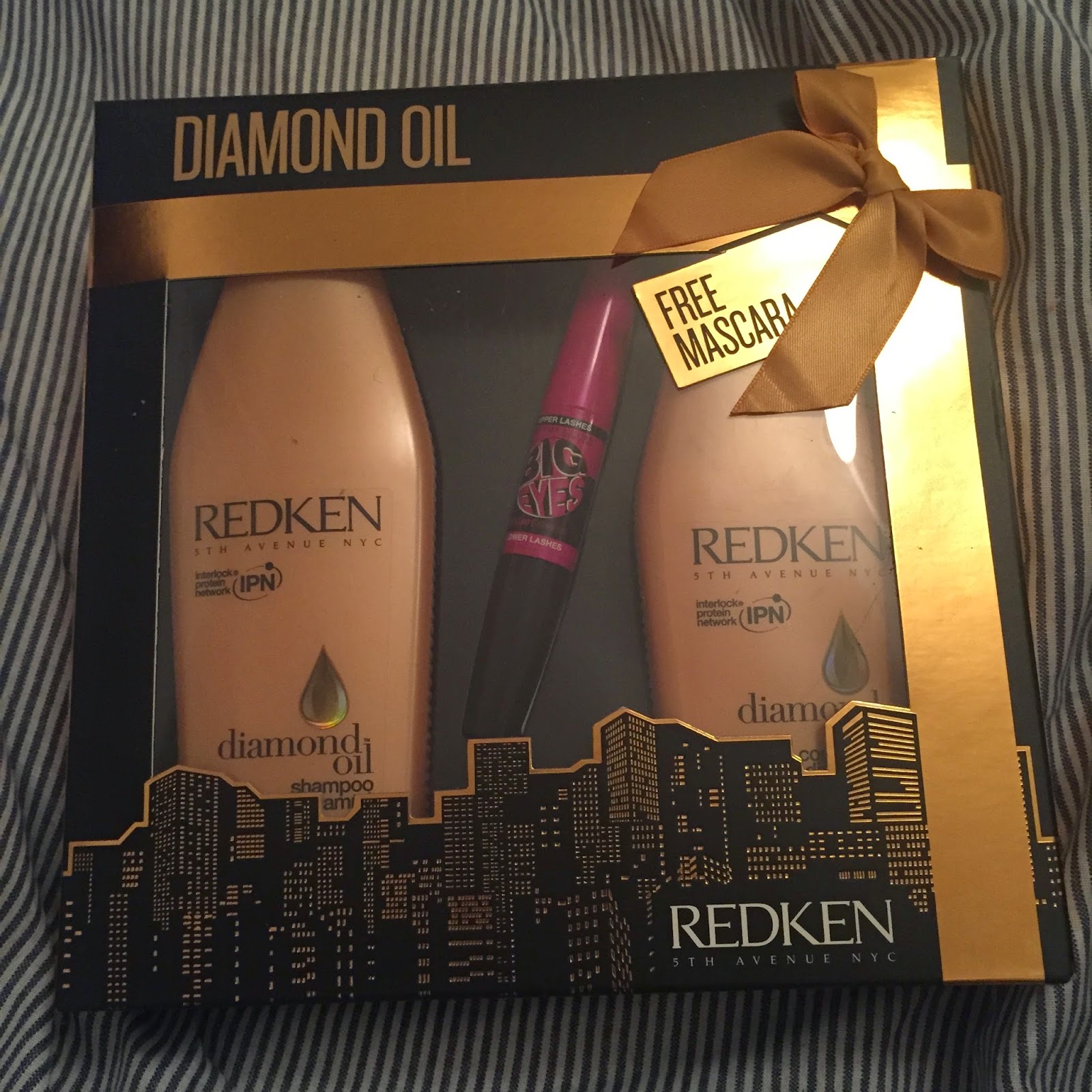 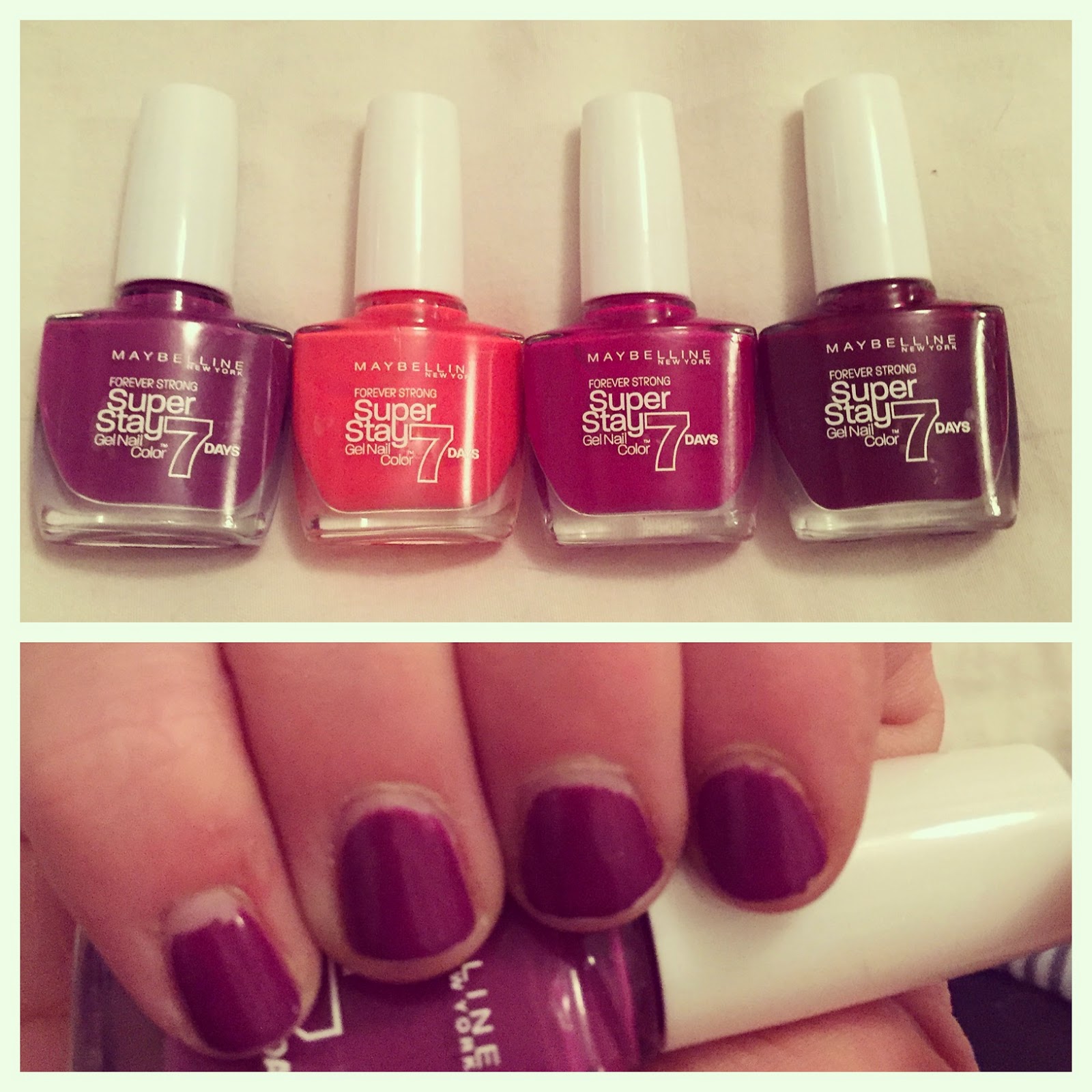 I’ve been using Redken shampoo for over 10 years now. No matter how hard I’ve tried to love more inexpensive alternatives, annoyingly, my hair will just not cooperate unless it’s lavished in Redken products. You can buy them in salons, but I always get mine from Feel Unique, my favourite beauty website. It’s so much cheaper and there’s a steady stream of 10-15% off promo codes as well. Since I’ve dialled down the blonde in my hair a bit, I’ve been trying to give it as much nourishment as possible, and decided to switch up from usual ‘blonde glam’ to the diamond oil range. I’ve used it once and so far so good. Will report back after a few more washes.

It’s very rare that any nail polish brand other than Essie graces the pages of Rosie Posie’s Puddings & Pies, I’m just utterly devoted to them as a brand. However I was in the supermarket a few weeks ago and spied these. I bought the berry coloured one to give it a go, the photo above is with seven days worth of wear (with two top coats), so it’s pretty safe to say I was impressed enough to immediately invest in a few more. It’s not often that these products live up to either their ‘gel effect’ or ‘7 day wear’ claims, but I’m happy to say that in my experience, these nail both. I’m not usually much of a Maybelline girl, but these have got me immediately hooked. want.more. 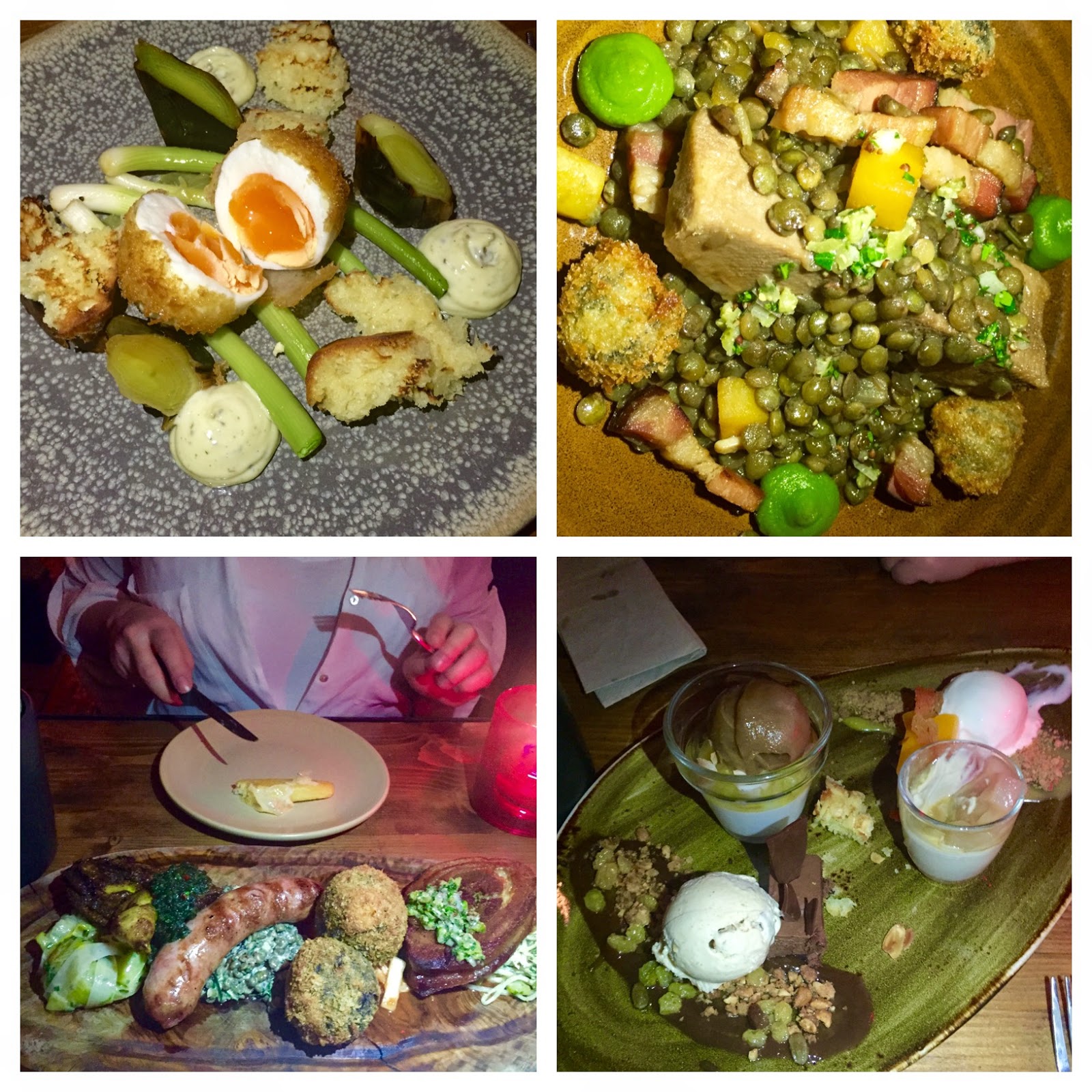 Another week, another excessively large meat-based meal. I’ve made no secret for my love of Plateau in previous reviews, but I’m ashamed to say that I didn’t make it there once last year and decided it needed to be rectified. I shan’t say too much as there’s already a full review in the making, but it was definitely worthy of a spot in this week’s favourite things post. Make sure you subscribe to my social media channels (icons on the right of the screen) to ensure you don’t ever miss a review, I’ve got loads coming up in the next few weeks, food, bad and ugly. 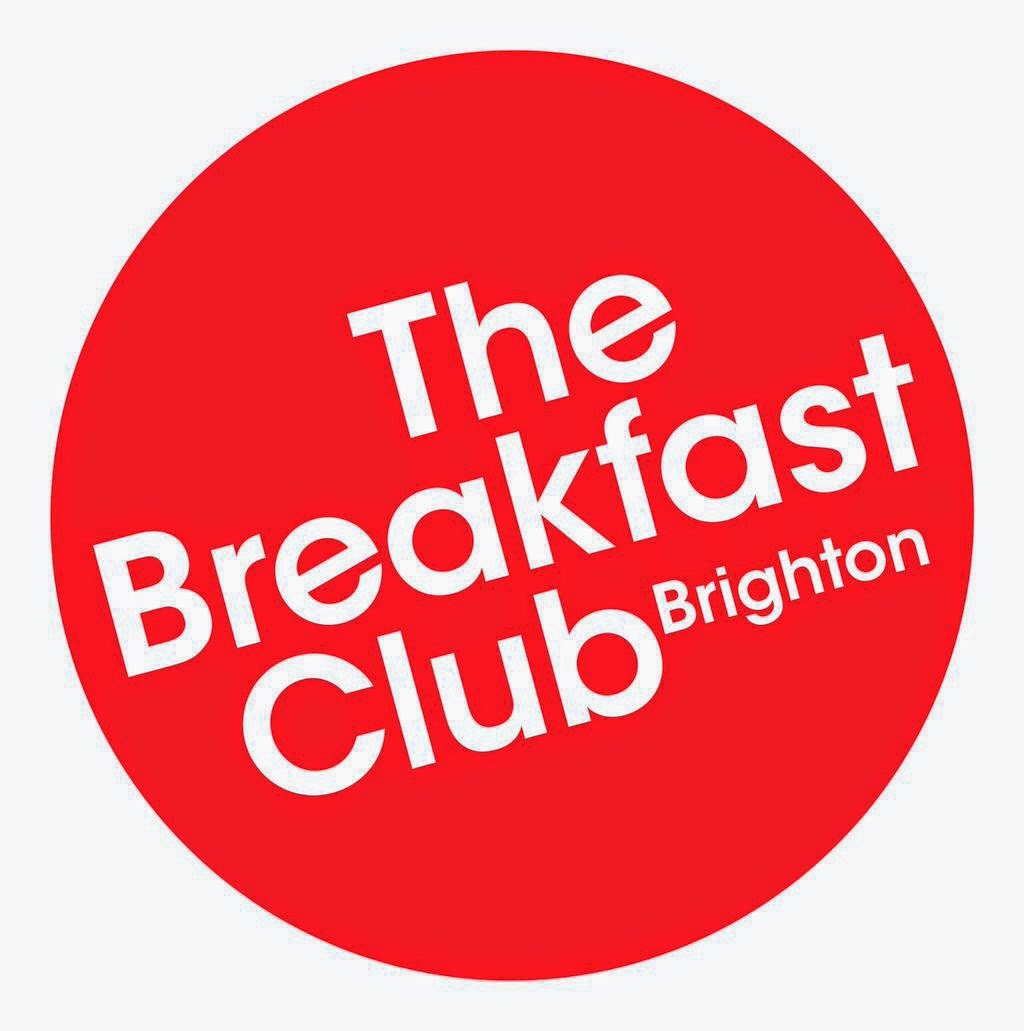 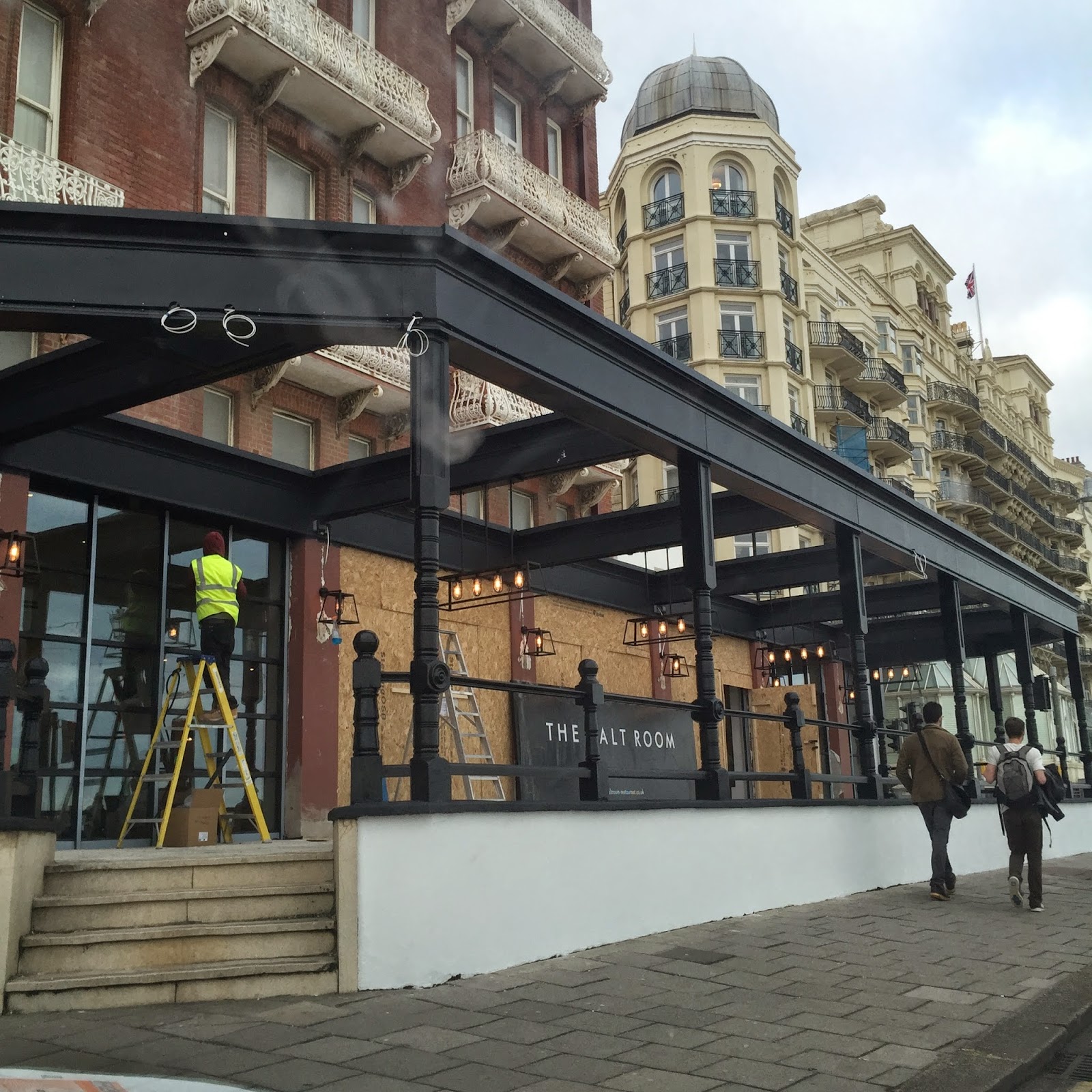 Eeeeek, I’m so excited about both of these new additions to the Brighton food scene, I’m struggling to keep my composure. In fact I have been since I got an email a few weeks ago from one of the lovely ladies at the Breakfast Club, telling me that they’re coming to Brighton. It was all hush-hush until last week when they announced it on their Twitter account, and since then I’ve been telling anyone who’ll listen. We’ve been in touch since we met at the Brighton Marathon last year, and ever since then I’ve been urging them to put a site down here. And now my dreams have come true! *victory dance*.

The Salt Room is the not so little sibling of the much loved Coal Shed Restaurant (and home of my favourite Brighton roast to date), and judging by the hype on Twitter already, is going to be just as popular, if they get it right. It’ll be very interesting to see where it sits in amongst the New Club/GB1/Riddle & Finns etc.. I’ve a sneaking suspicion it’s going to do very well though. 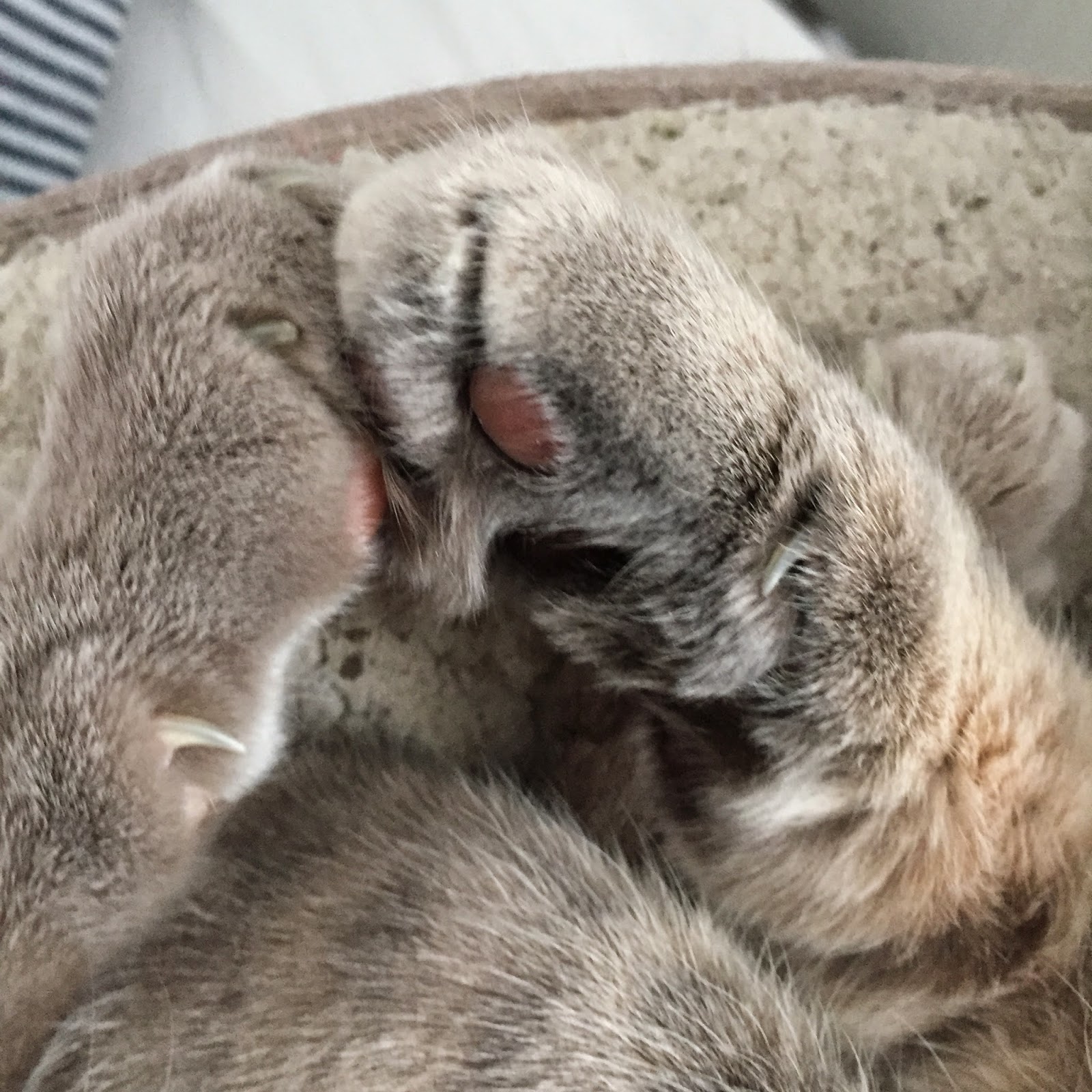 What were your favourite things this week? How do you feel about seeing the return of more regular recipe posts on here again? Please do comment below or tweet me x

I’ve added a disclaimer to my blog, you can read it here.