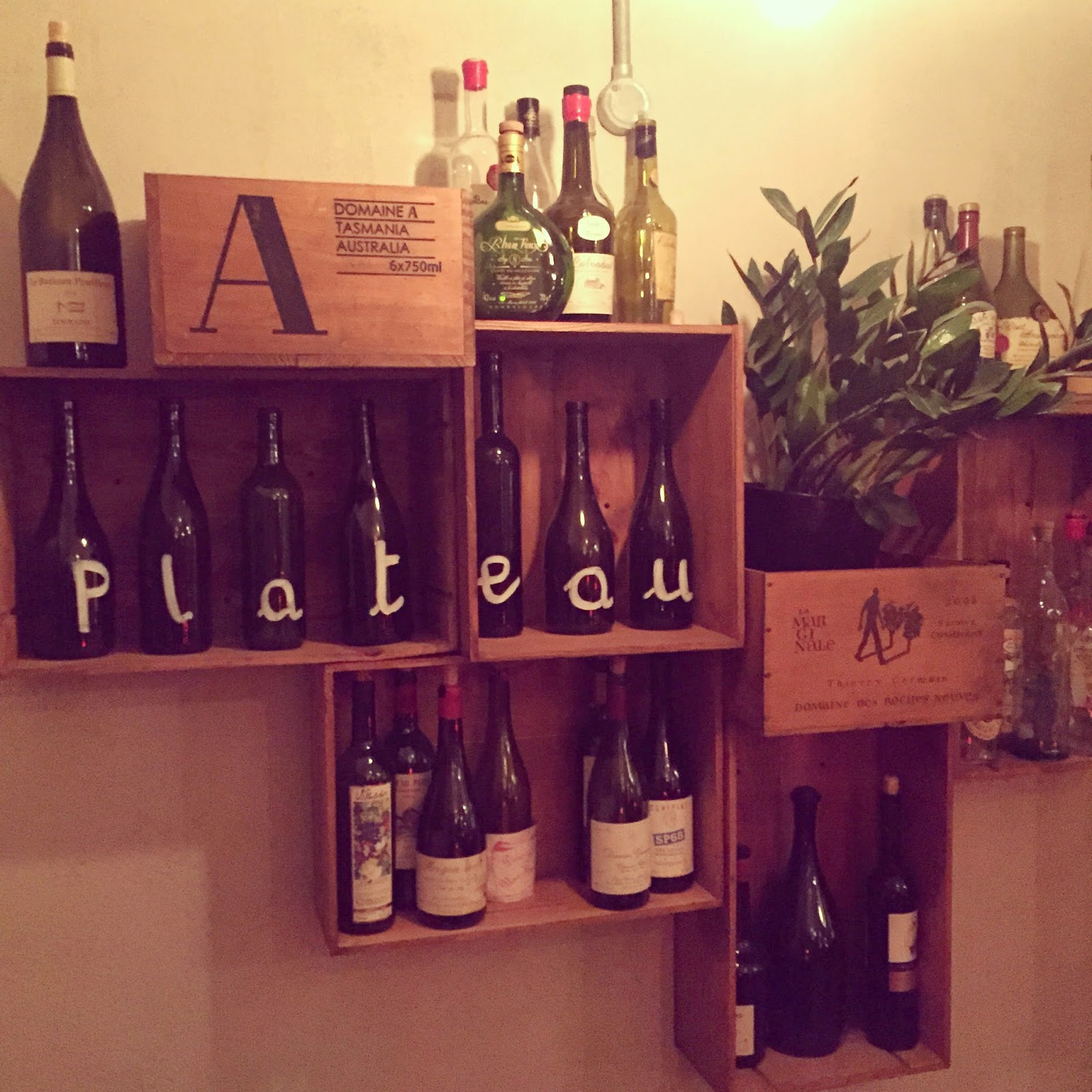 Plateau is an incredibly popular restaurant in Brighton, with nearly every food lover and blogger I know (myself included) singing its praises through all of the social platforms available to them.

I was a frequent visitor in 2012 and 2013 but as my blog developed a life of its own, I stopped being a regular at many restaurants, always on the hunt for the next best thing and for somewhere new to review. So to say I was excited to be returning, after a year long break, is an understatement.

Word has clearly stretched beyond the realms of the foodie world, as when I rang to book a table for a Saturday evening nearly a week in advance, they were only able to accommodate a table for two at 6:30-always a good sign. It was rammo when we arrived and our table was upstairs and was initially empty but every was seat taken by the time we left. It was a same story when I visited their sister restaurant Mange tout as well. Popular, popular places, and deservedly so. 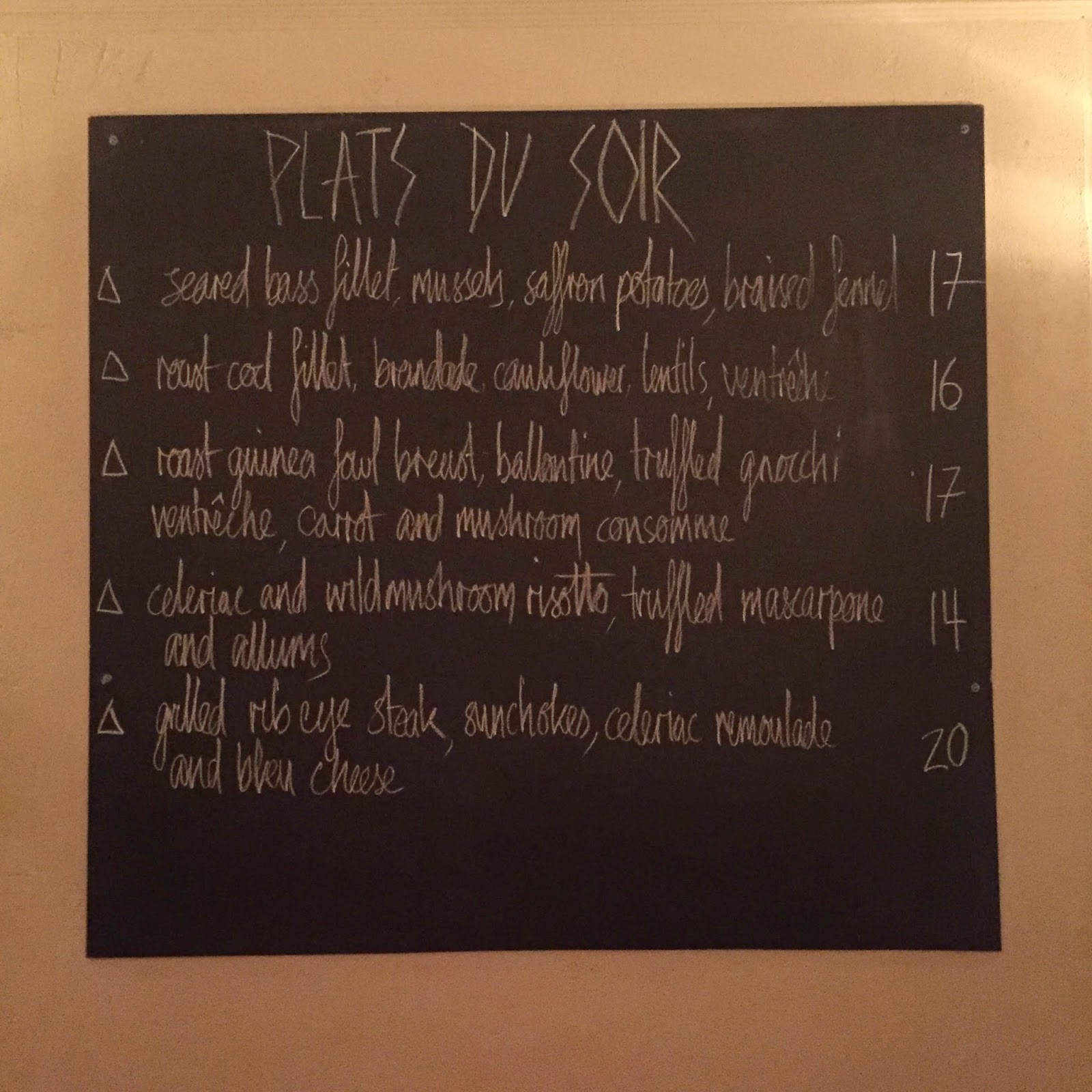 The main menu is made up of mainly the smaller plates, or ‘bites’ with only a few main course size ‘plats’, the specials board is where the the bulk of the mains are listed. We had our heart set on the plateau de viandes though, so decided against ordering something from the board. Both the specials board and the main menu change frequently depending on what’s in season. Big tick. 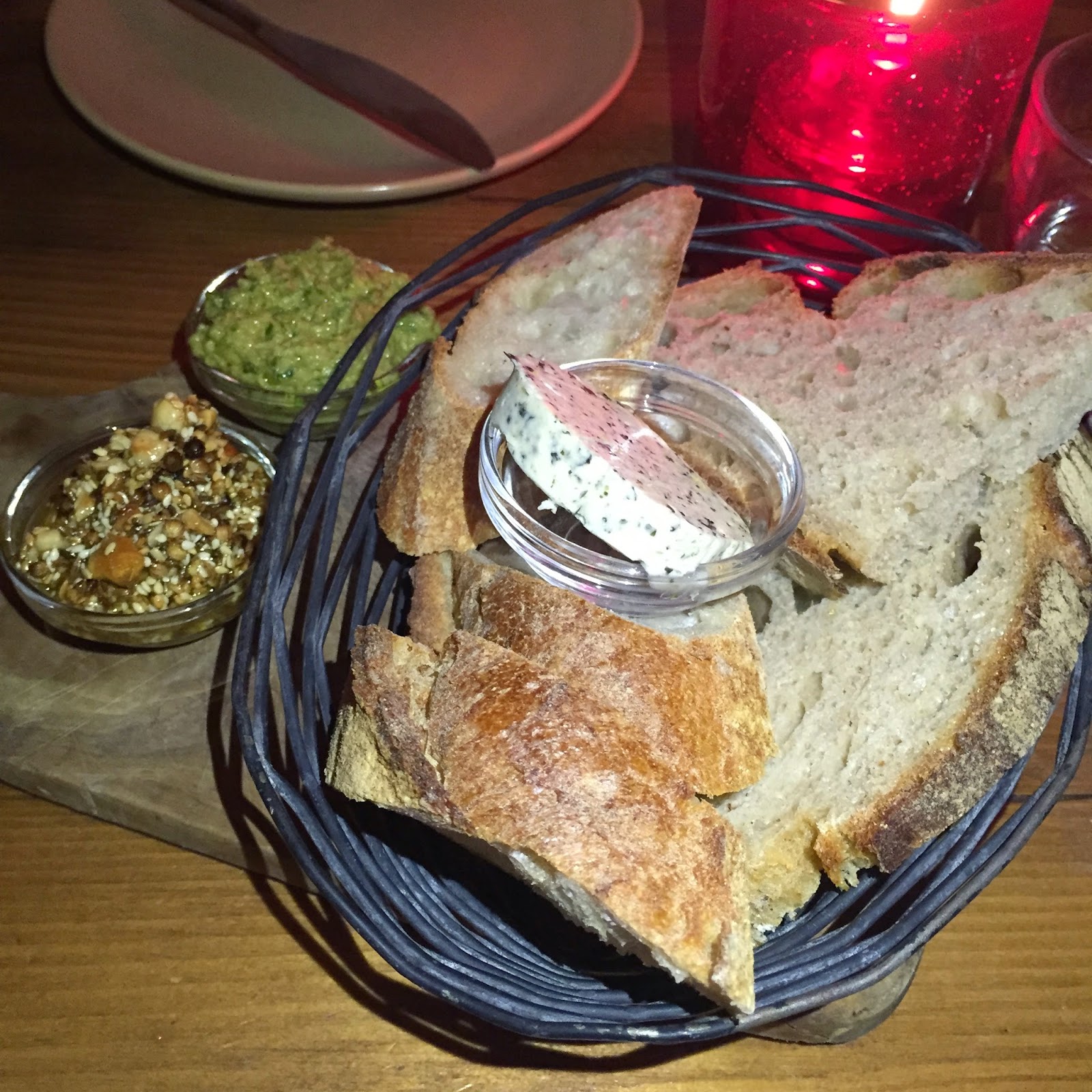 In terms of interior, ambience and music choice, I have always thought, and still think, that Plateau hits the nail squarely on the head. Smart casual at its absolute best I’d say, and that goes for the service too. It sounds a bit trite, but it’s not all about the food here, it’s the whole dining experience. I love it, and have sent numerous people their way, totally certain in my recommendation. 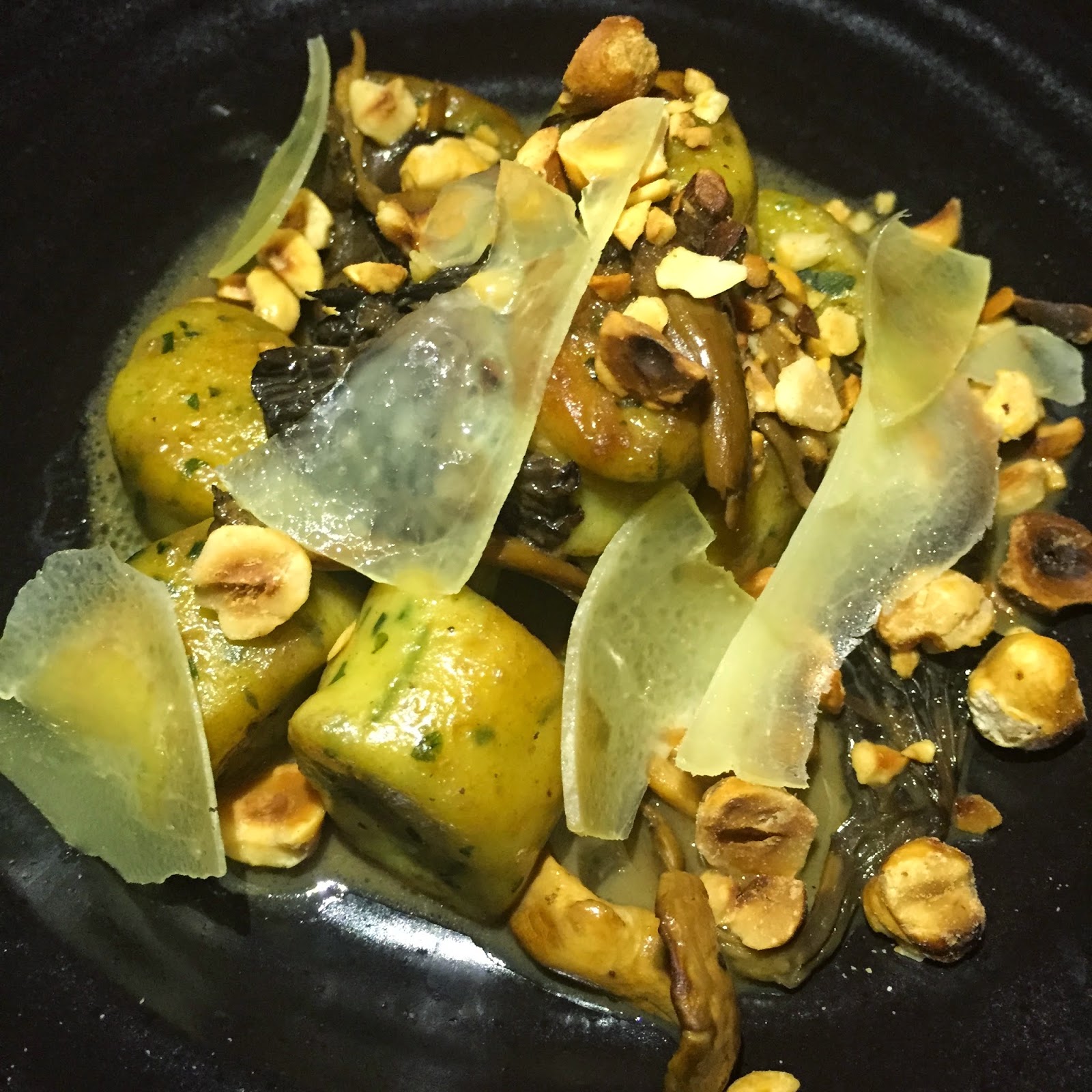 I’m not actually a massive fan of gnocchi that hasn’t been fried. I find it a bit one dimensional and claggy, happily this was not the case in this instance at all. Silky and flecked with, parsley (I believe) throughout, the hazelnuts scattered on top added a lovely crunch and broke up the gnocchi beautifully. Anything containing mushrooms is going to please me (other than soup, eww) and these ones didn’t disappoint. I can’t believe I used to hate mushrooms, what a waste of all those years. 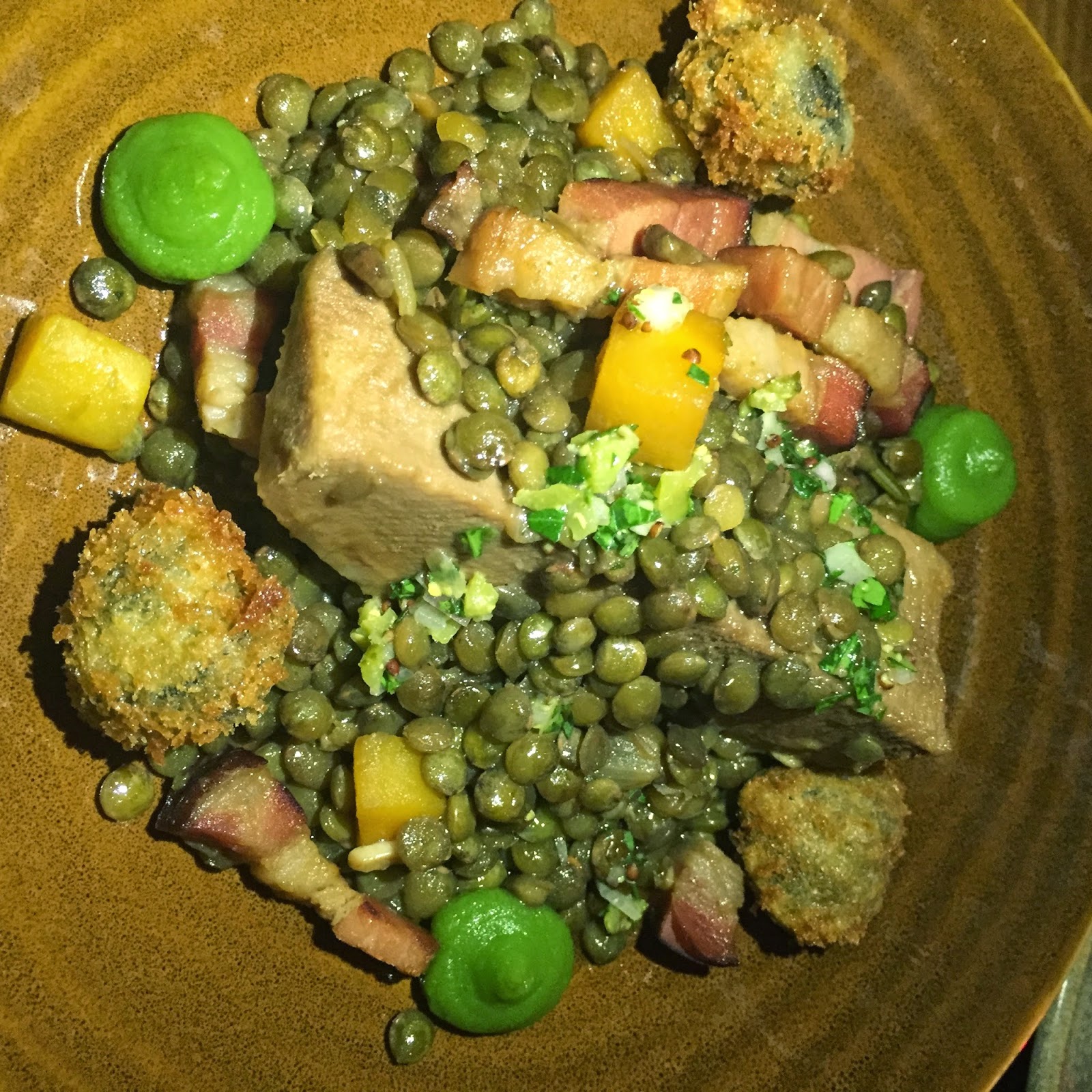 One of, if not, the highlight of the meal was this. I’m aware this dish may seem exceptionally unappealing to those who aren’t adventurous in terms of food, but as soon as I saw it on the menu I knew it had to be mine.  The snails weren’t dissimilar to garlic mushrooms, until you had chewed a couple of times and the delicate flavour of the snail came through. I don’t know how to describe it really, other than silky and a bit earthy. Not in a rank beetroot like way either, in a good way.

Tongue is obviously one fatty cut of meat, but to me, it didn’t taste like offal, it tasted like beef. I can’t say it’s aesthetically pleasing, especially when it is an actual tongue and a kind of beige colour, but I’d definitely order this dish again. I could even tolerate that the lentils weren’t heated, they weren’t fridge temperature, more room temperature, so much more pleasant than the cold creamy ones I mention a little later on. 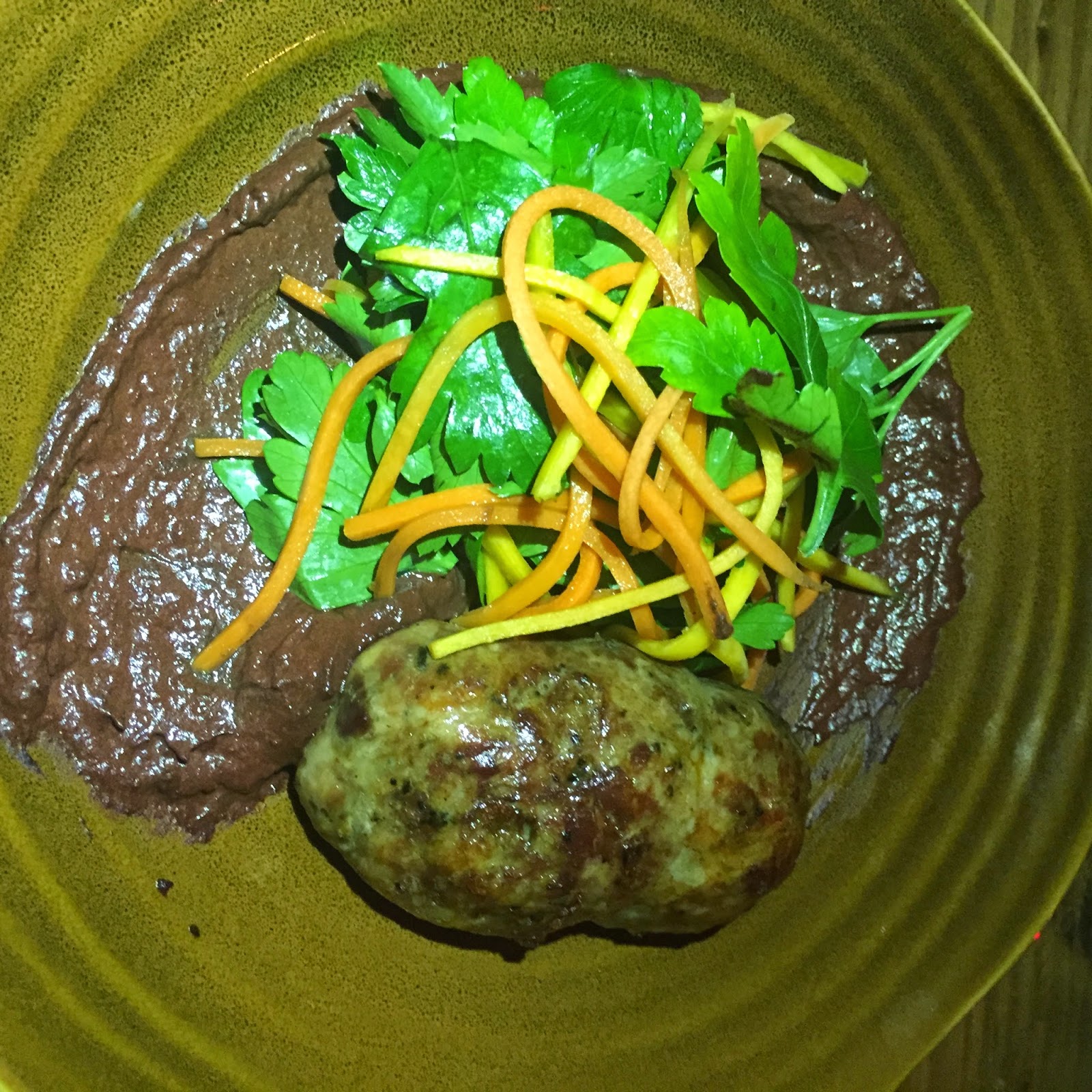 I don’t know how I felt about the fact that the boudin noir was a puree. It didn’t look especially appealing and whilst it tasted nice, I’m not sure I can get behind it as a concept, texture-wise.

The crepinette on the other hand, was some of the nicest rabbit I’ve ever eaten. The meat itself was all minced up and mixed with herbs and seasoning to create a kind of flat sausage, it’d be a great dish for a rabbit newbie as it doesn’t have loads of, or any bones at all, just all the flavour. Loved it. 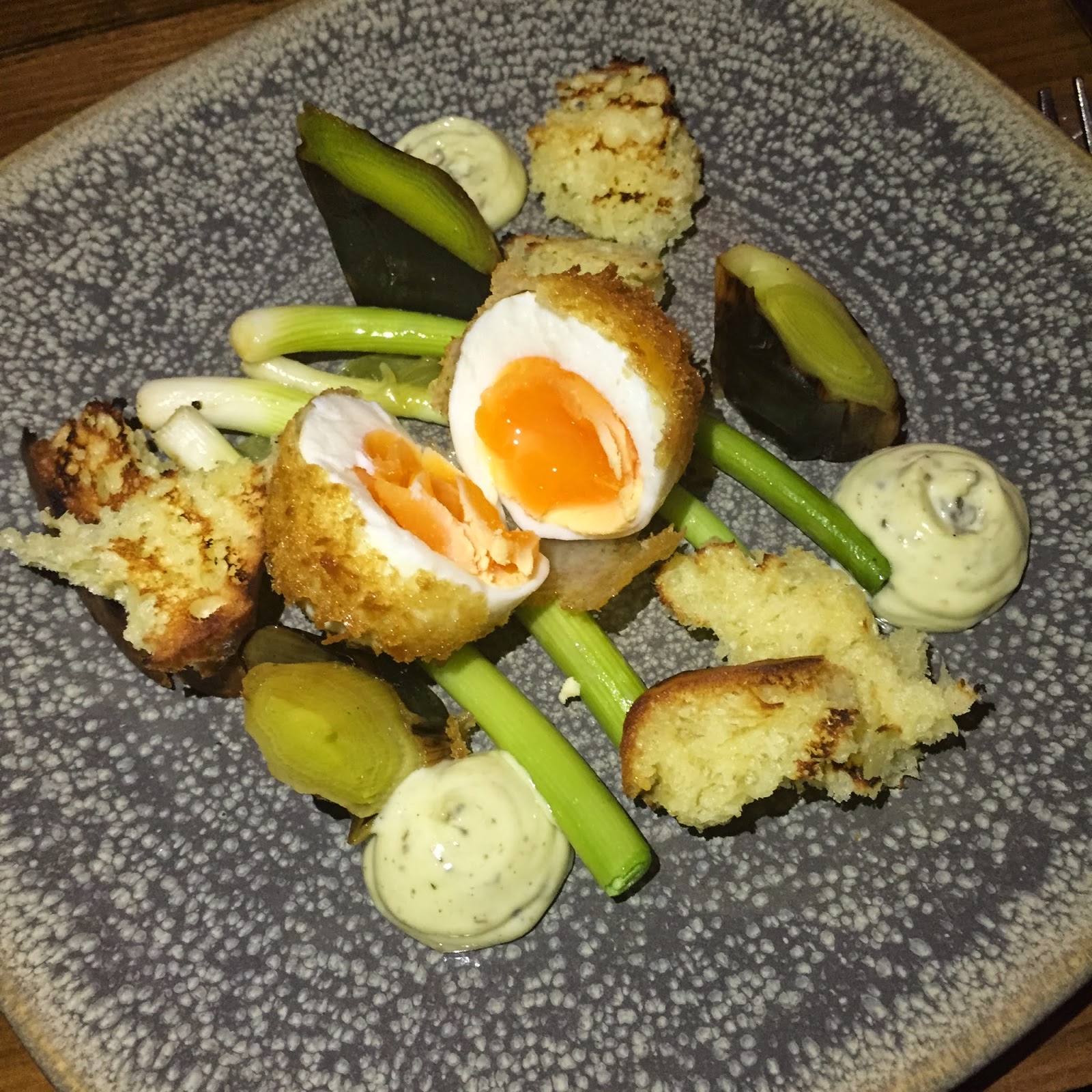 Probably my least favourite of all of the dishes as a whole. The egg yolk was overcooked, the leeks were fridge cold (they did say chilled, but I don’t understand why they’d do that?!) the brioche could have been any old bread torn up and the truffle, didn’t make its presence felt much at all. I’m not into whole, raw spring onions either, far too harsh. 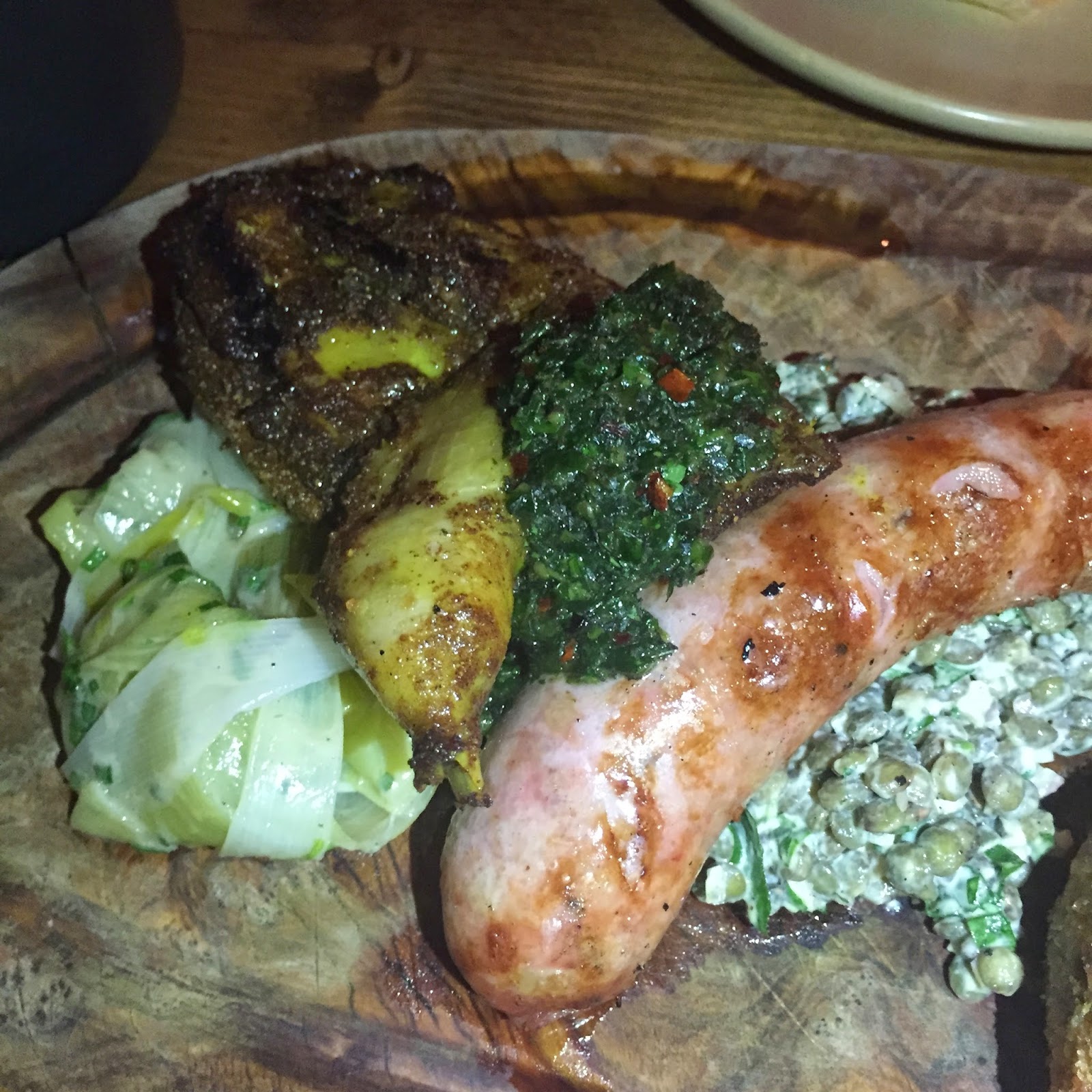 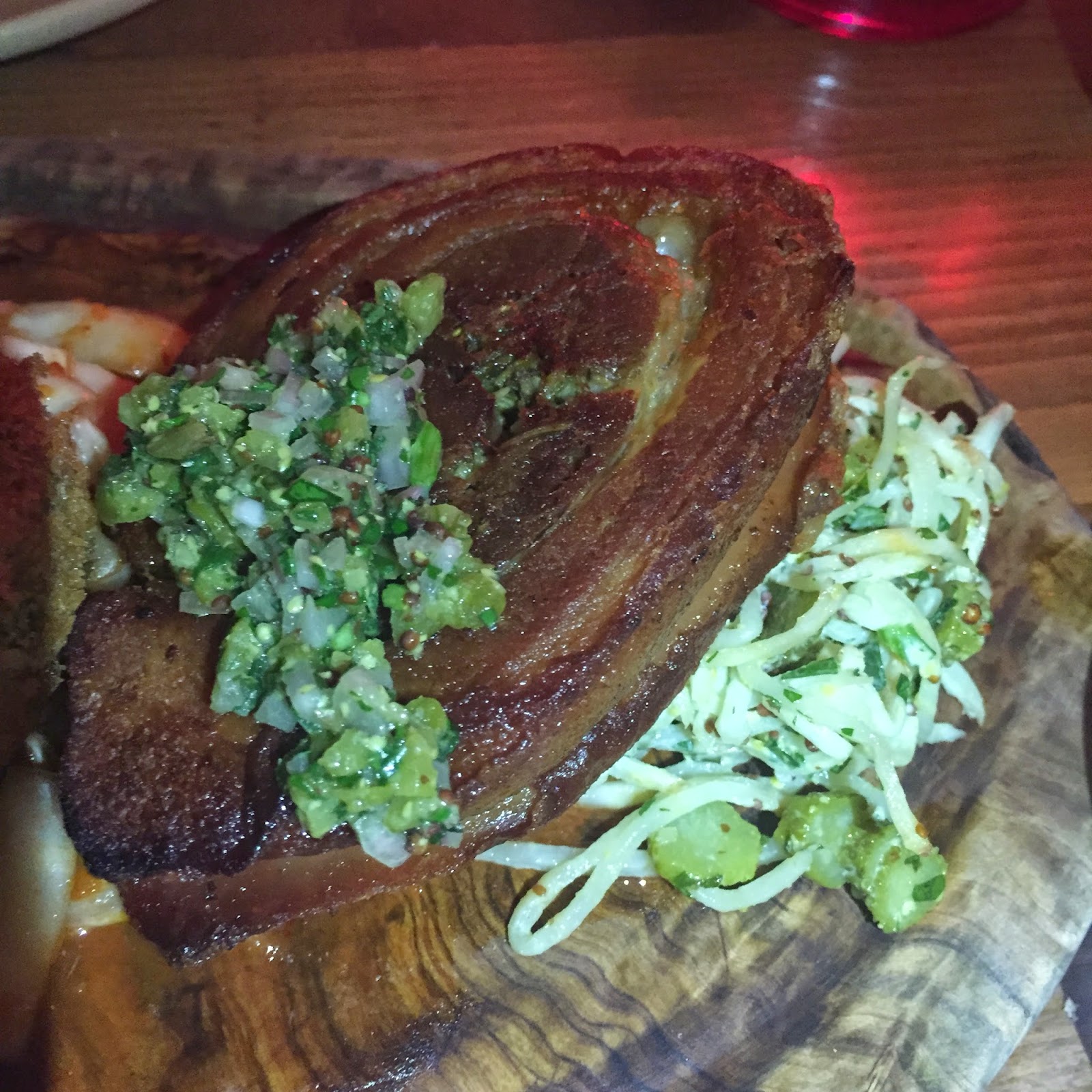 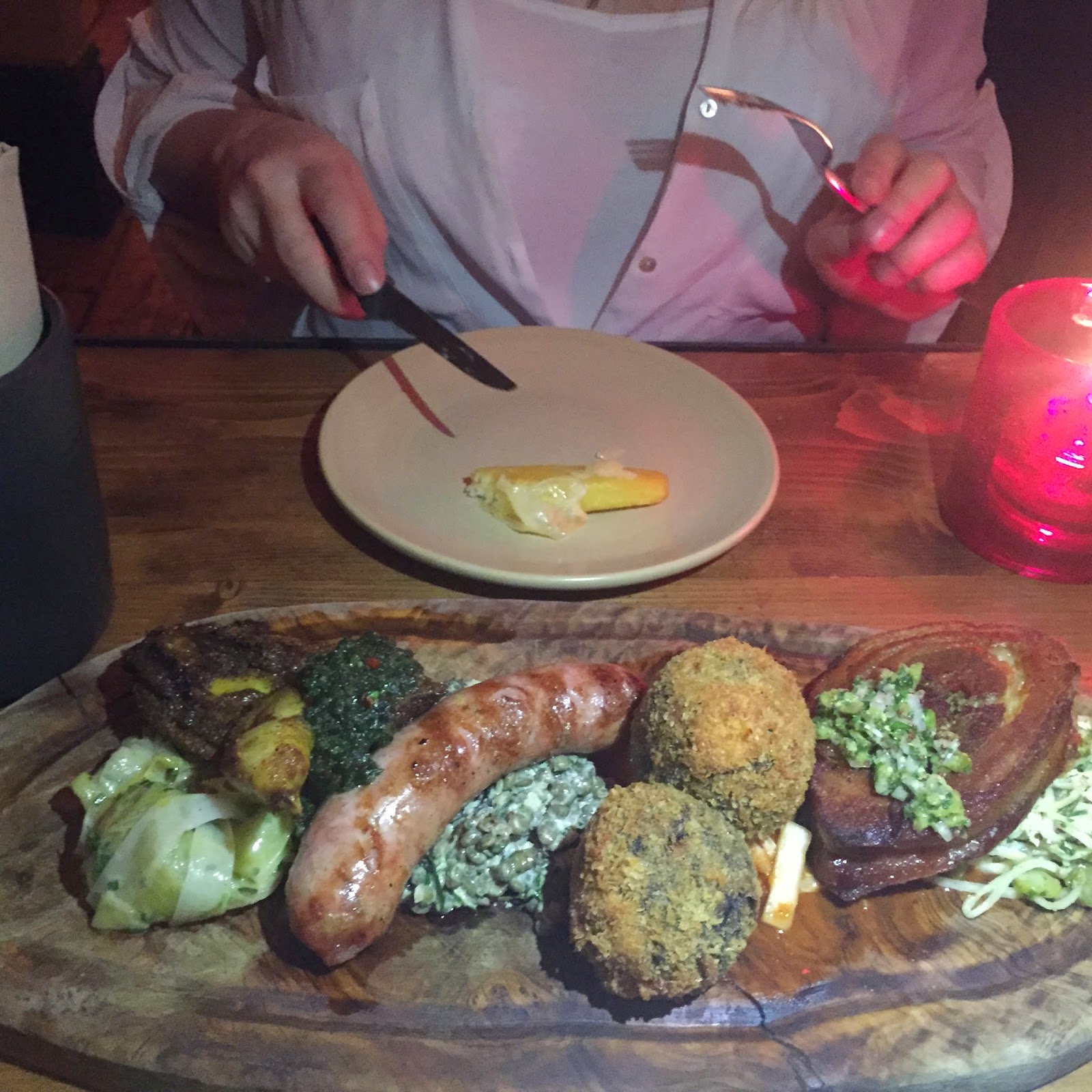 I loved all of the meat, my order of preference actually runs straight from right to left. The rolled pork belly was perfect, the crispy outside yielded to make way for some meltingly tender flesh, just beautiful. The black pudding balls fulfilled my need for some more traditional blood sausage, and its Toulouse counterpart was simple yet bursting with flavour. The quail was my least favourite, mainly because of the bones, I understand that’s the nature of this beast, but I’m never overly keen on things that obstruct my path to the good stuff. What little meat that was on there really was delicious though.If the quail had been replaced with steak or perhaps a confit duck leg, it would’ve been a holy grail meat dish for me.

Ah, the return of the hateful cold leeks, and not only those, there were cold creamed lentils as well. Whyyyyyy Plateau? The remoulade on which the pork sitting was also cold, that was fine, but hot sausage and cold lentil I can seriously do without

If I’m totally honest I’m not too sure on the price of this, I do not balk at throwing cash at food, at all, but I’m not sure if it was worth the money. I think I’d rather have spent my £30 on four more of the dishes from the ‘bites’ part of the menu. I still regret not getting the mackerel, it sounded fantastic. 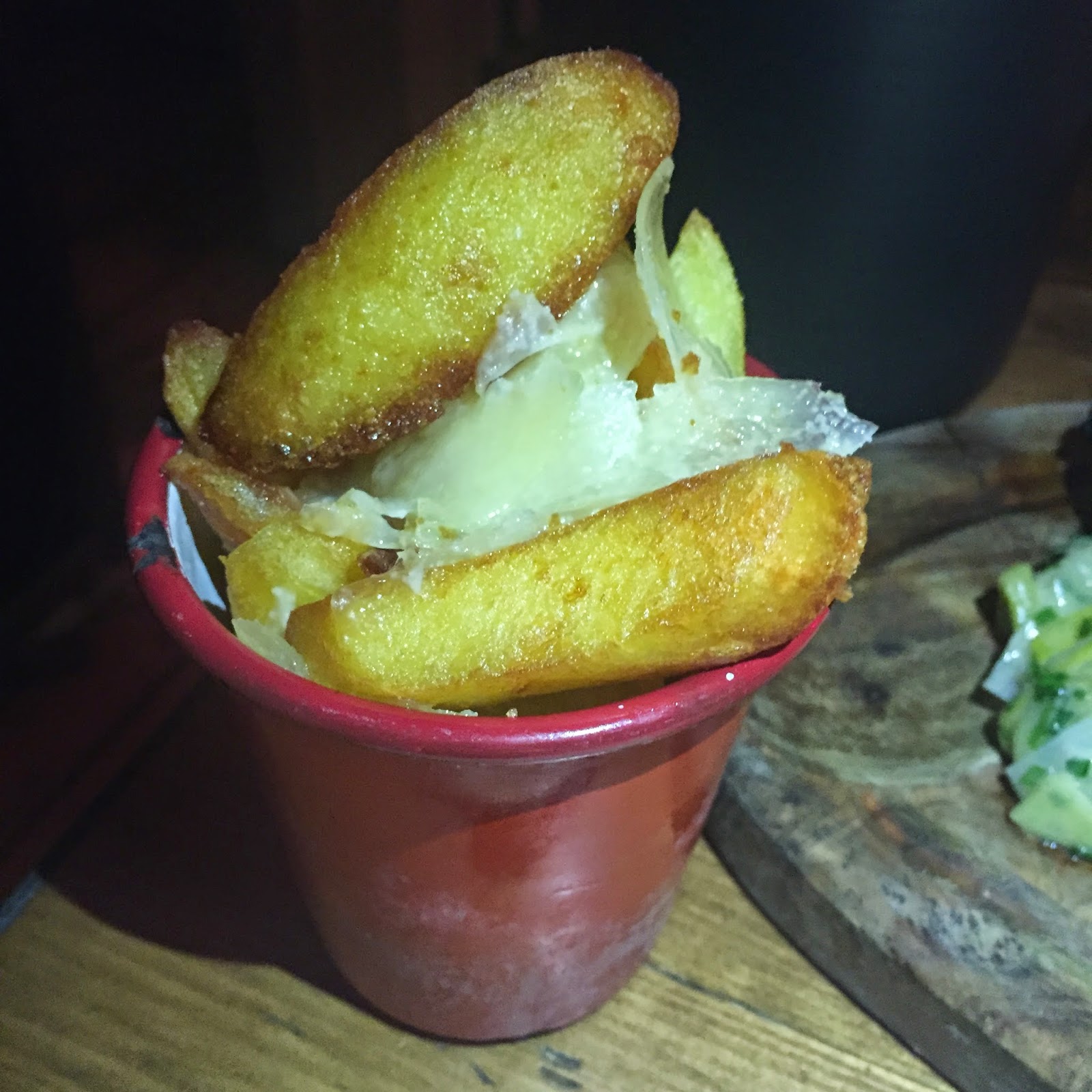 It would have been wrong not to order a potato element to go with our meat feast and the cheese and truffle combo was an absolute no brainer for us. Duddleswell is a delicious sheep’s cheese made at a working farm near where I grew up and was such a brilliant bedfellow with the perfectly cooked hunks of potato. Again, the truffle didn’t come through for me a great deal, but it wasn’t the end of the world, they were still really good. 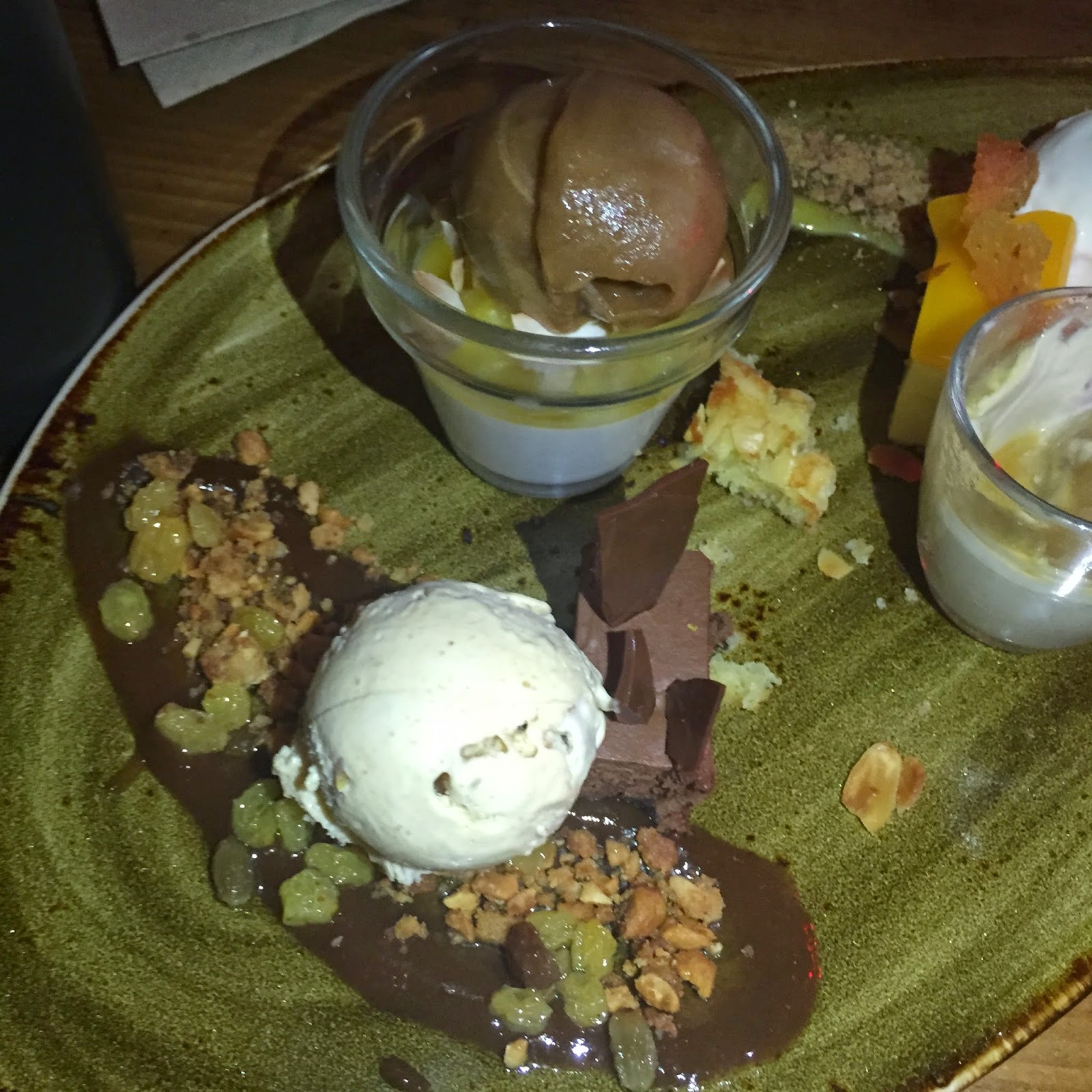 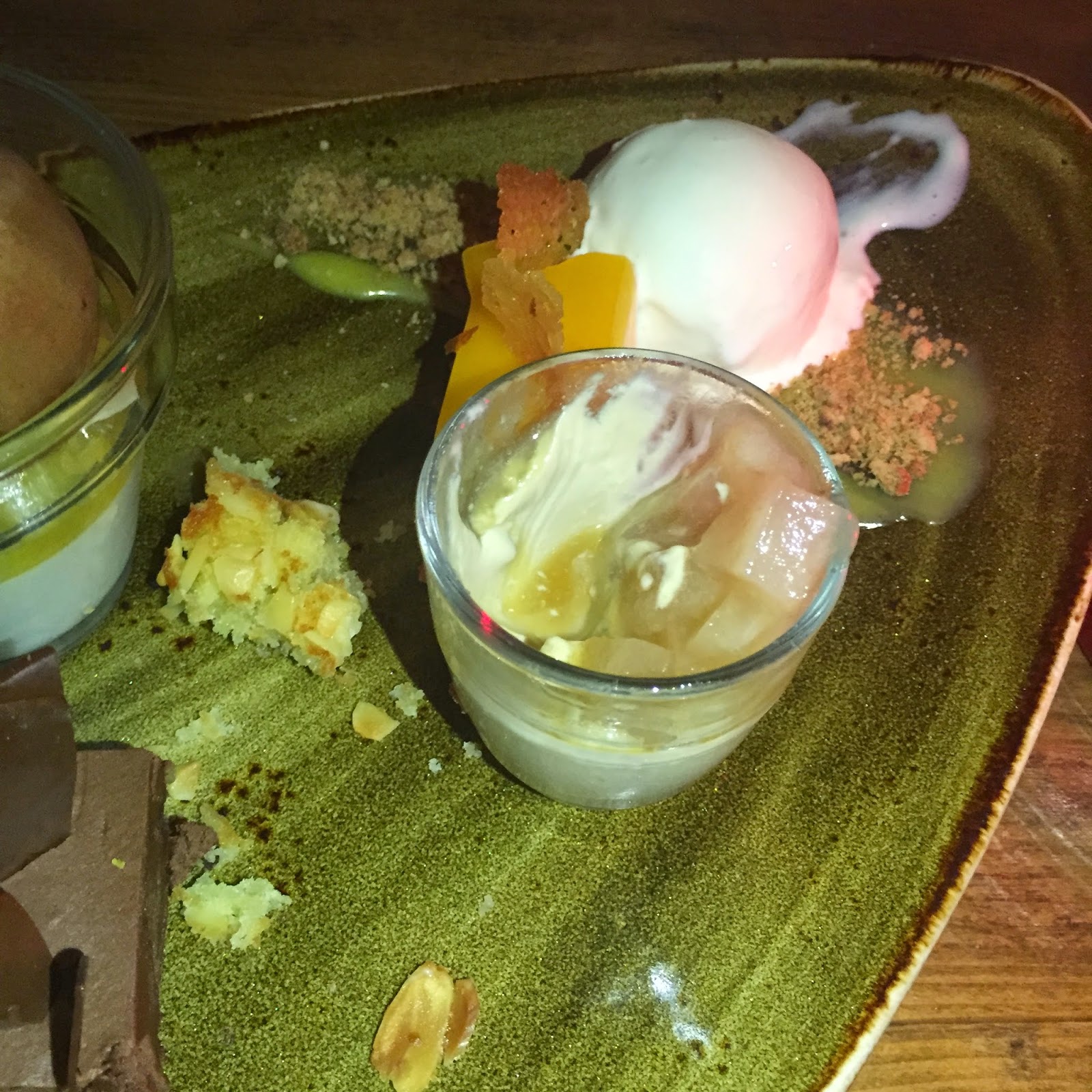 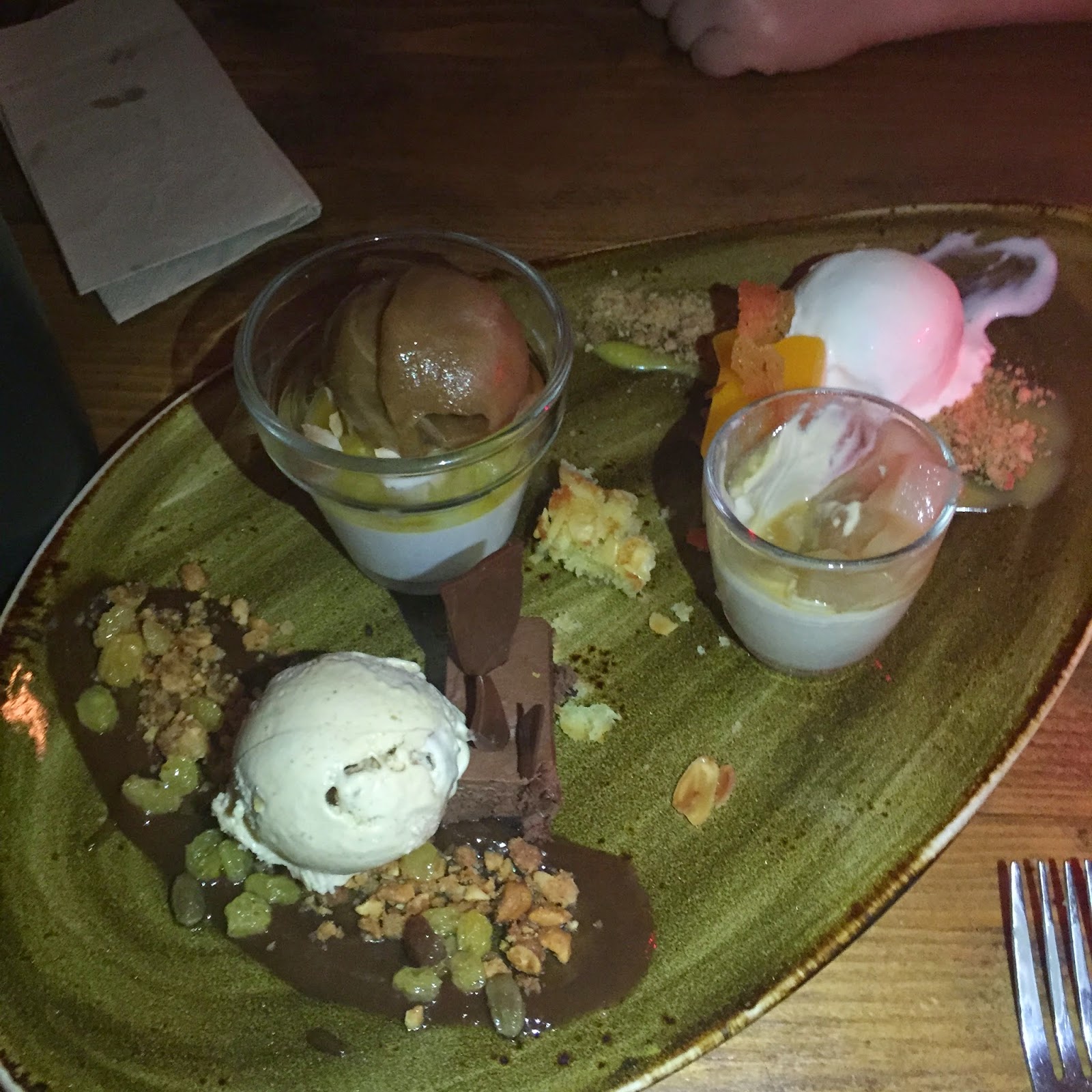 This is the other dish I had mixed feelings about. I’ll get the negative out of the way, whatever it was that was in the glass pot on the right, a tamarind and coconut panacotta, was really not for me. I didn’t like anything about it at all. The glass pot on the left was something pineapple-ly, another pannacotta I think, and had slightly more to recommend it flavour-wise, but I wasn’t a huge fan of that either.

The chocolate aspects, the peanut butter ice-cream and the pear and almond tart, on the other hand, were a totally different ball game. The pear and almond tart was on a par with the incredible version I had at a Cantina supper club last year.  I just wish I’d been able to have more than a bite, it went so well with the creamy peanut butter laced ice-cream, which also went perfectly with the silky chocolate sauce and marquis too.

The price was at the top end of what I would want to pay for an assiette of desserts, but I still think it’s the best option for me as I suffer the most terrible FOMO, this way I get to try everything. 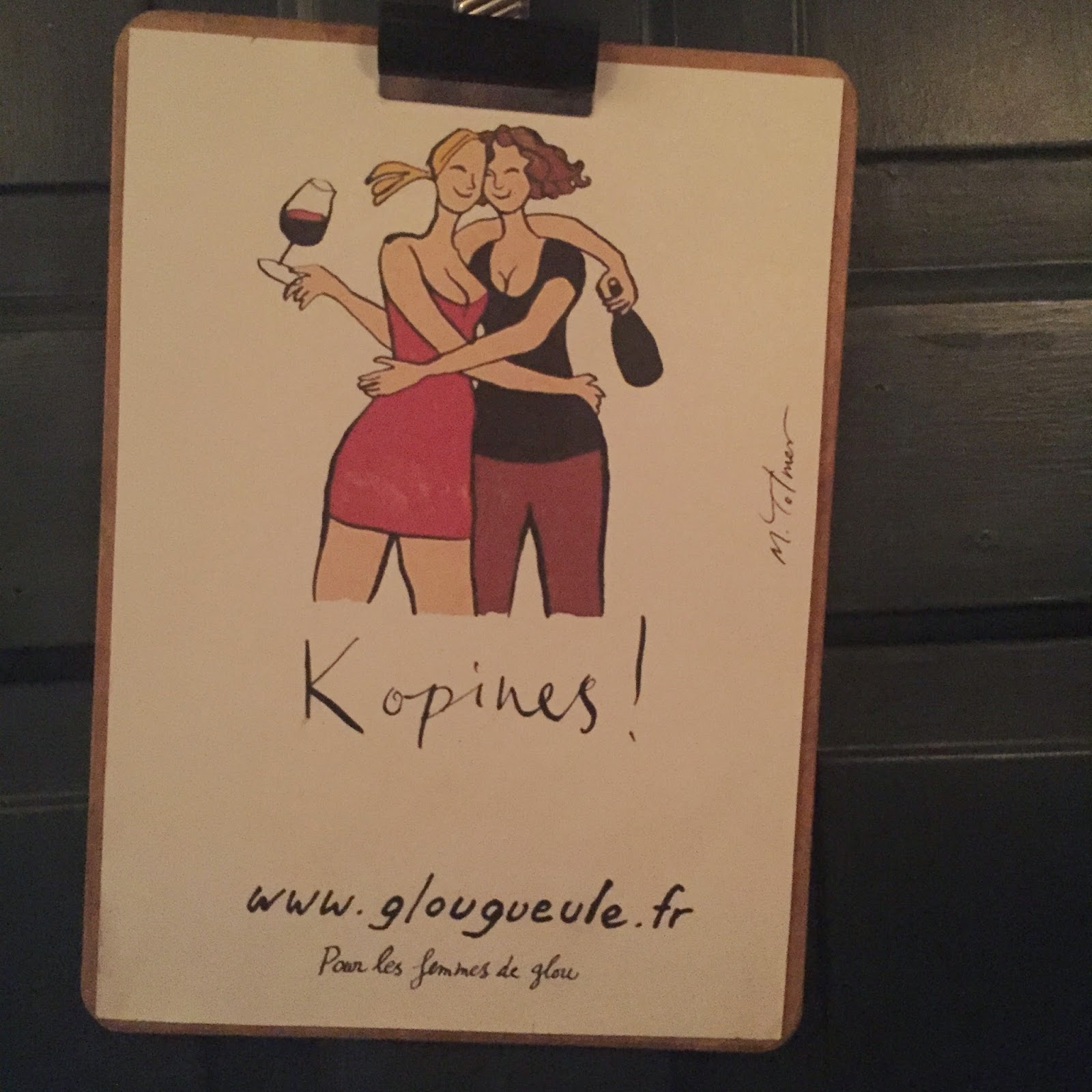 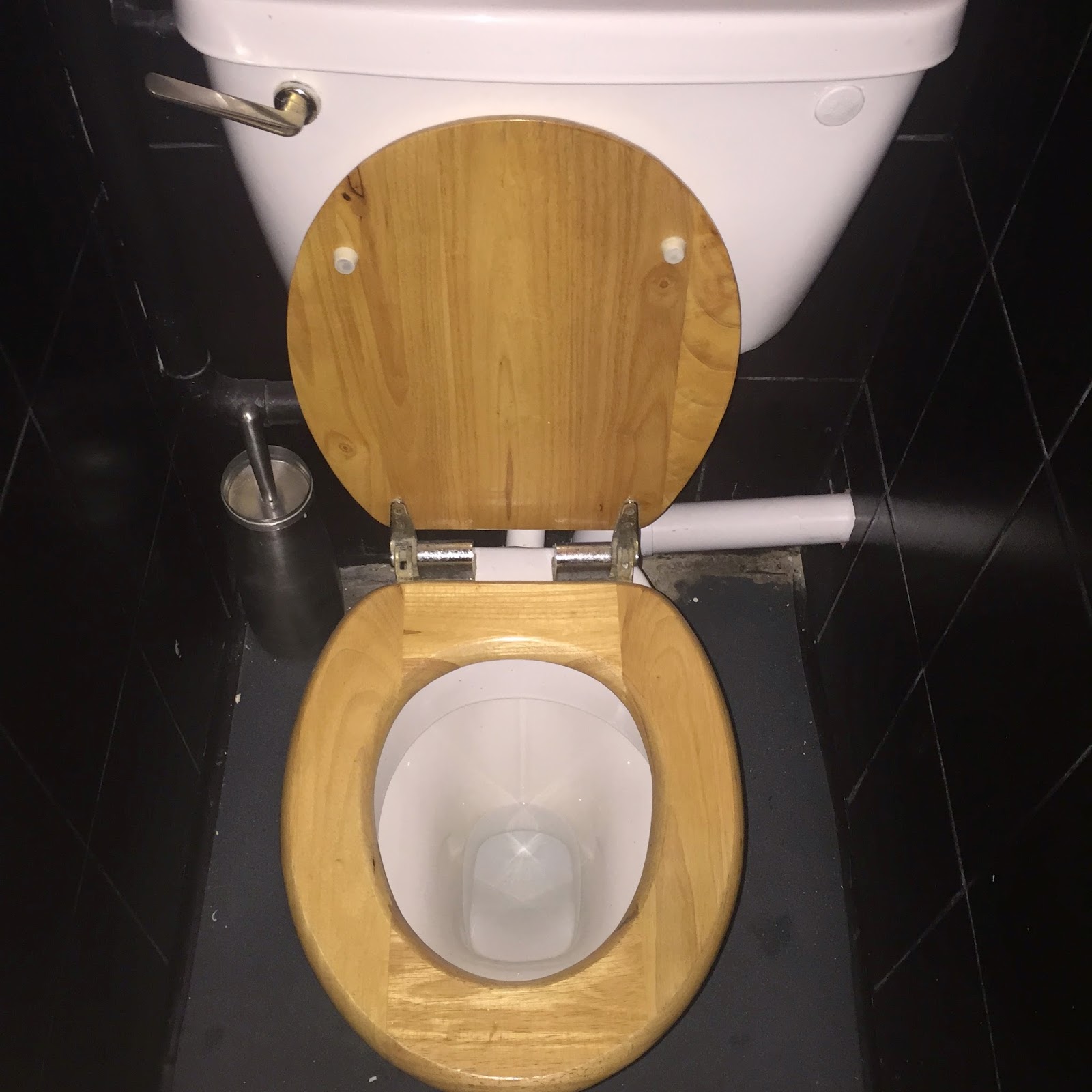 The loos were fine, no unpleasant smells (despite being in the basement. Basic but clean, functional and nothing I had any problem with. Thank goodness, reliving the horrors at Al Duomo was bad enough for one month. 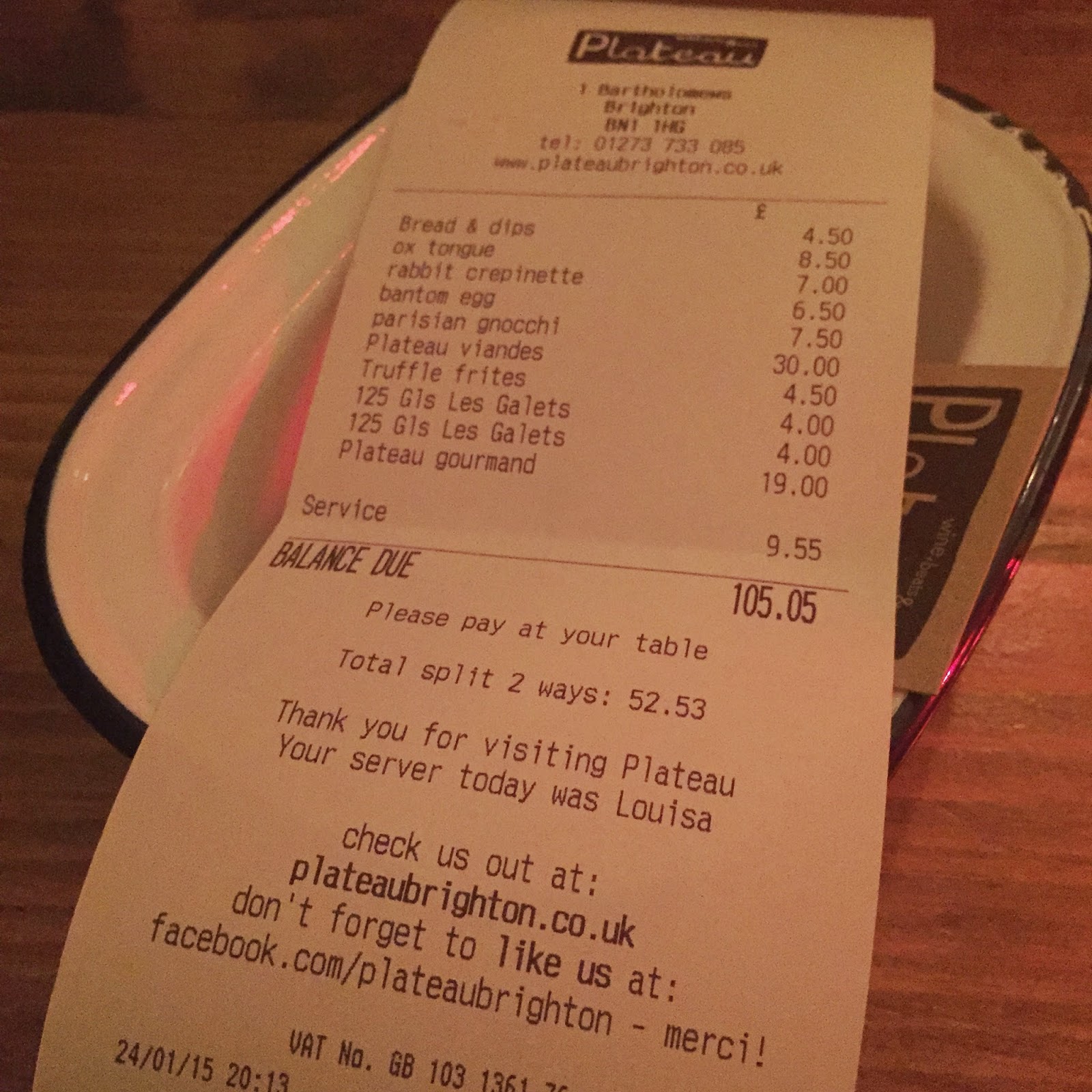 Certainly not the cheapest meal I’ve had this year, but then I wasn’t expecting it to be. I think it was a fair price overall. I also love the bill split at the bottom, I think it’s really discreet and extremely convenient for large parties etc. Provided they aren’t the type to quibble over someone having an extra coffee etc… god that makes me cringe so much.

I’ve put off writing this review, for weeks, mainly because I find it really difficult to criticise somewhere I love. Other than one of the panacottas, we cleared every plate effortlessly, so although some bits were really underwhelming, they were far from inedible. I think when it comes to Plateau I have high expectations. I’m very happy to offend, but only with good reason, and just because I didn’t enjoy a few of the dishes that evening, doesn’t take away from the half dozen or so exemplary meals I’ve had there. It certainly wouldn’t stop me from returning, nor should it you either.

You can read my previous Plateau reviews here and here.