A cursory scroll through this site will make it clear to anyone that I’ve got a bit of a ‘thing’ for fry ups.  This is in fact my third Brighton breakfast round up and I’m pretty sure it won’t be the last.

Funnily enough, a few months in to our research, someone did a passive aggressive status about people posting photos of food being wannabe bloggers. Total prick, but it turns out, he was onto something, and a few months later, this blog was born. A couple more months and my fry up post went live. To this day it’s still one of my most visited posts, so you lot obviously have a thing for breakfast too

In my previous two breakfast posts there was a clear cut winner in each, this time, it’s not so easy.  In my heart of hearts Joe’s Cafe is still my favourite, but they’ve faced some stiff competition in the form of Riddle & Finns and the Seven Bees too. I haven’t marked them out of 10 this time around, I hope you don’t mind, it’s just too hard when they’re all of such a similar standard, and actually, each of them is worth a look bar one. Enjoy, a lot of calories were consumed in the making of this! 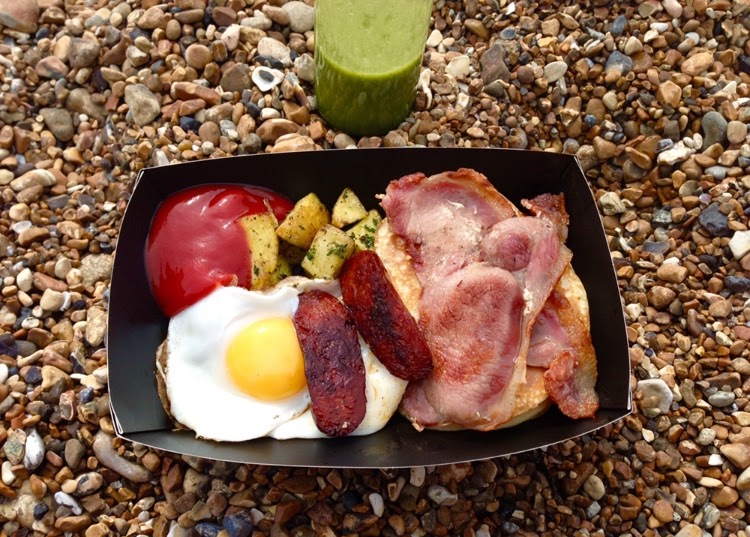 I could totally go off on one now, there’s quite an amusing story about how I got chatting to amazingly lovely team from The Breakfast Club, but I’m going to save it for the full review of their restaurant in Brighton. Yup, you heard me right, THE BREAKFAST CLUB IS COMING TO BRIGHTON and I’m not sure if there’s anyone more excited about it  than me.

I’ve eaten from their food truck three time and each time I’ve had the the same; an ‘All American’ and oh.my.god. they are fabulous.  Everything was cooked perfectly, crisp, fresh and you could tell it was all nice quality too.  I covered the whole thing with maple syrup, much to the disgust of my friend Susie, but as I said to her, don’t knock it ’til you’ve tried it.

The Breakfast Clubs will be in The Lanes in the old Fat Leo’s site. I think they’re going to smash it. 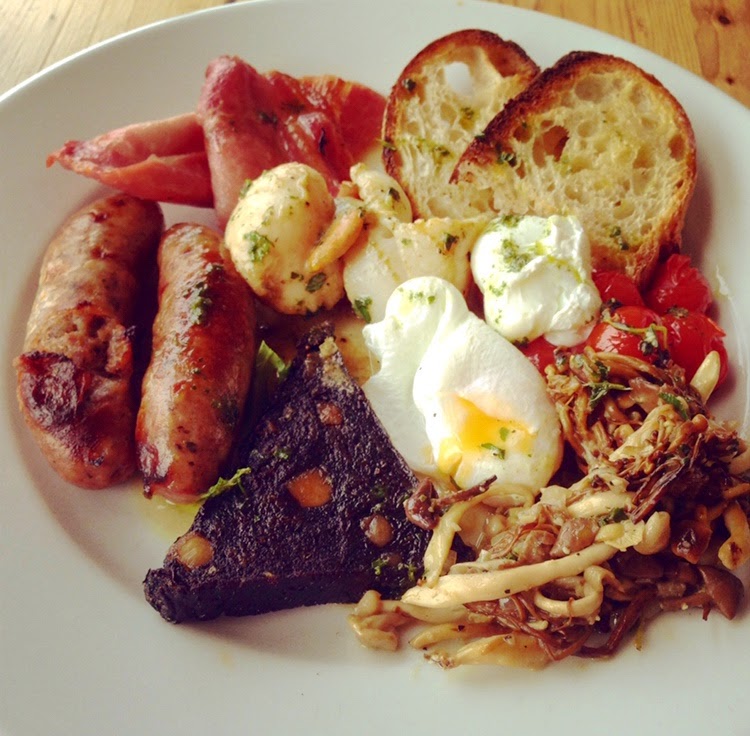 My old flatmate Jenna used to work at this restaurant and was the one who alerted me to the fact they served an extensive breakfast menu. It appears to be a rather well kept secret, when actually, they should be screaming it from the roof tops, it really was phenomenal.

The poached egg had a perfectly runny yolk, the black pudding was some of the nicest I’ve ever tasted, the wild mushrooms were buttery and delicious, and scallops, on a cooked breakfast, are absolutely life changing.  As ever though I’d have loved a potato element.

They only do breakfast on weekends and serve it at both the restaurants in the lanes and on the beach. The Rolls Royce of fry ups, made with serious ingredients at I think, a great price. I know some people might balk at paying £10.95, but I’d happily pay it in a heartbeat. 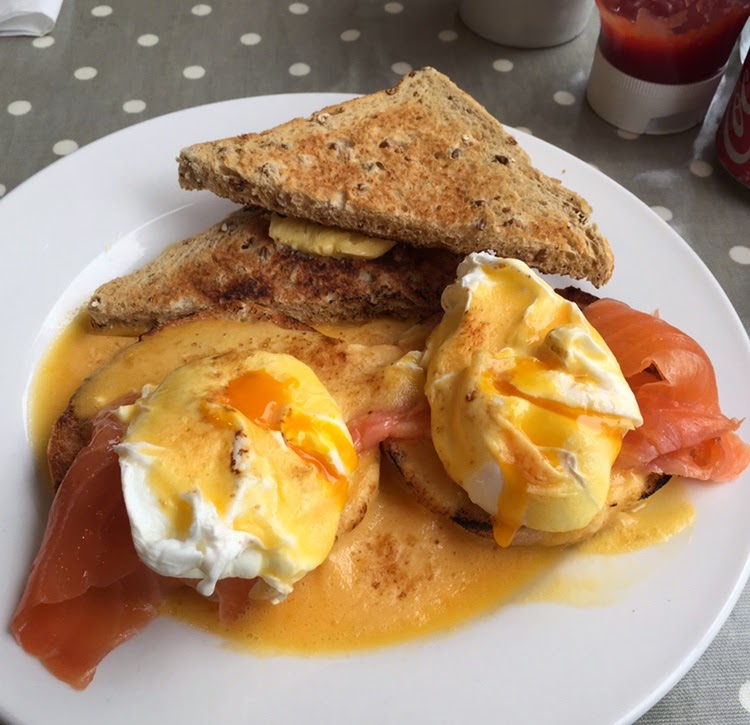 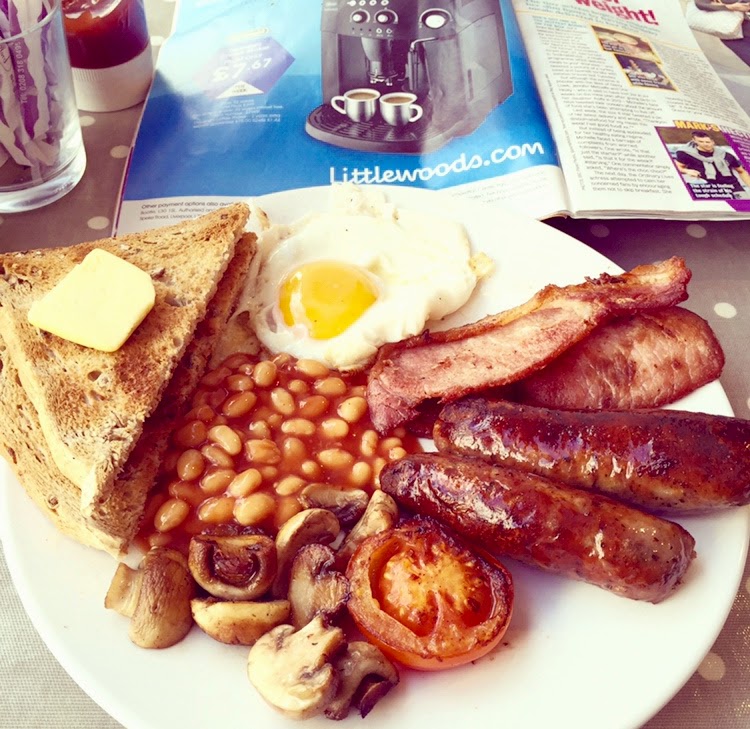 I’m not exaggerating when I say, I’ve eaten about 50 breakfasts from this place in the last 7 years one I’ve lived round the corner from it for most of those years. It’s basic, but cheap (£6.50) and the owners are very friendly and well versed in my hangover needs too. They also do a selection of potato rostis with various toppings and eggs benedict, florentine or royale (above) for about £7. It has been consistently good on the dozens of times that I’ve visited.

There’s a but. I made the mistake of checking their ‘scores on the doors’ report, they got 1/5. The next time I went in, I looked a bit more closely, and it was…. not ideal. I haven’t been in for months now, and may well have cleaned up their act so I shan’t say anymore. It was nice while it lasted, but with all the choice on my doorstep, they are right at the bottom of my list now. Such a shame. 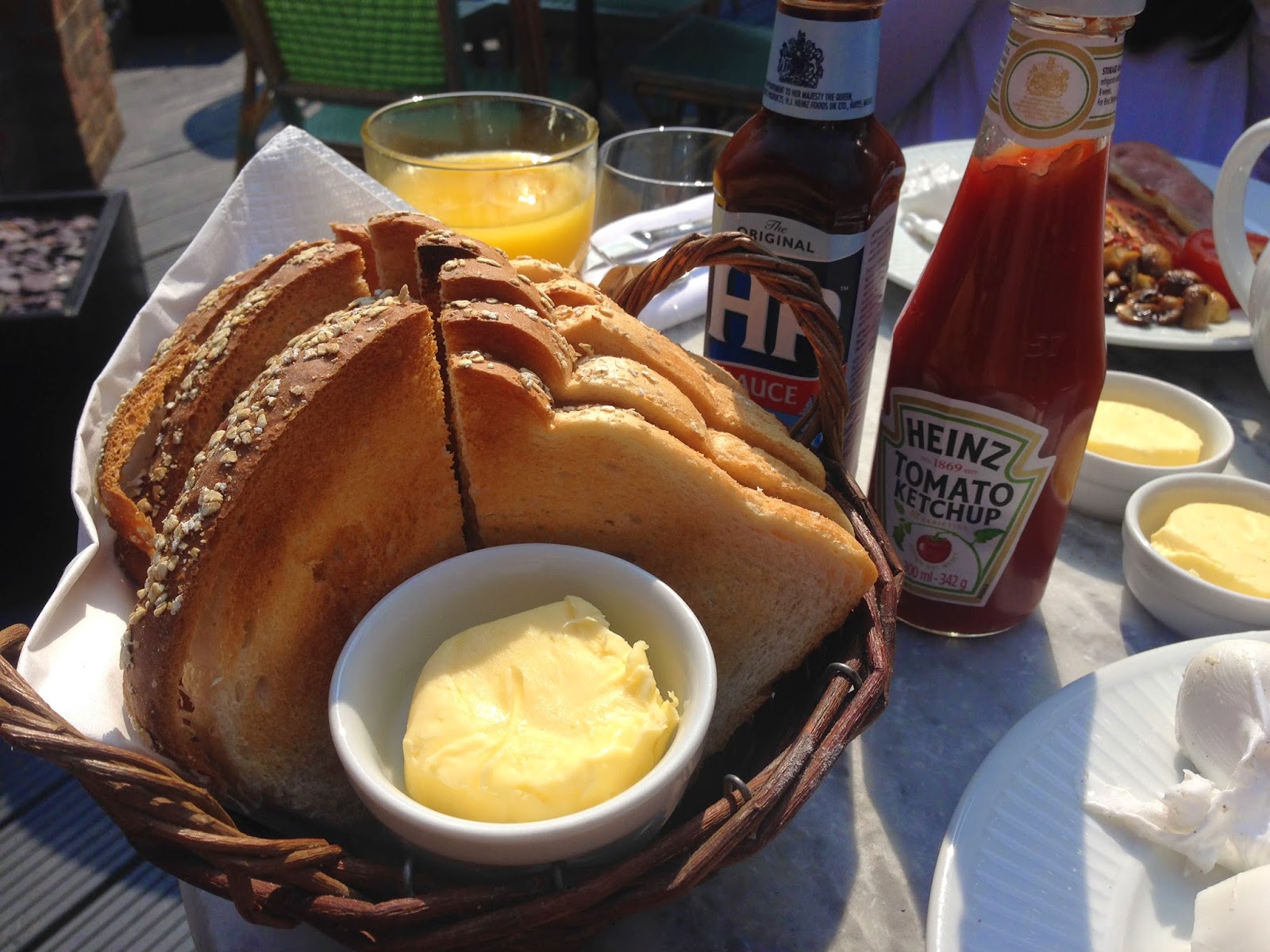 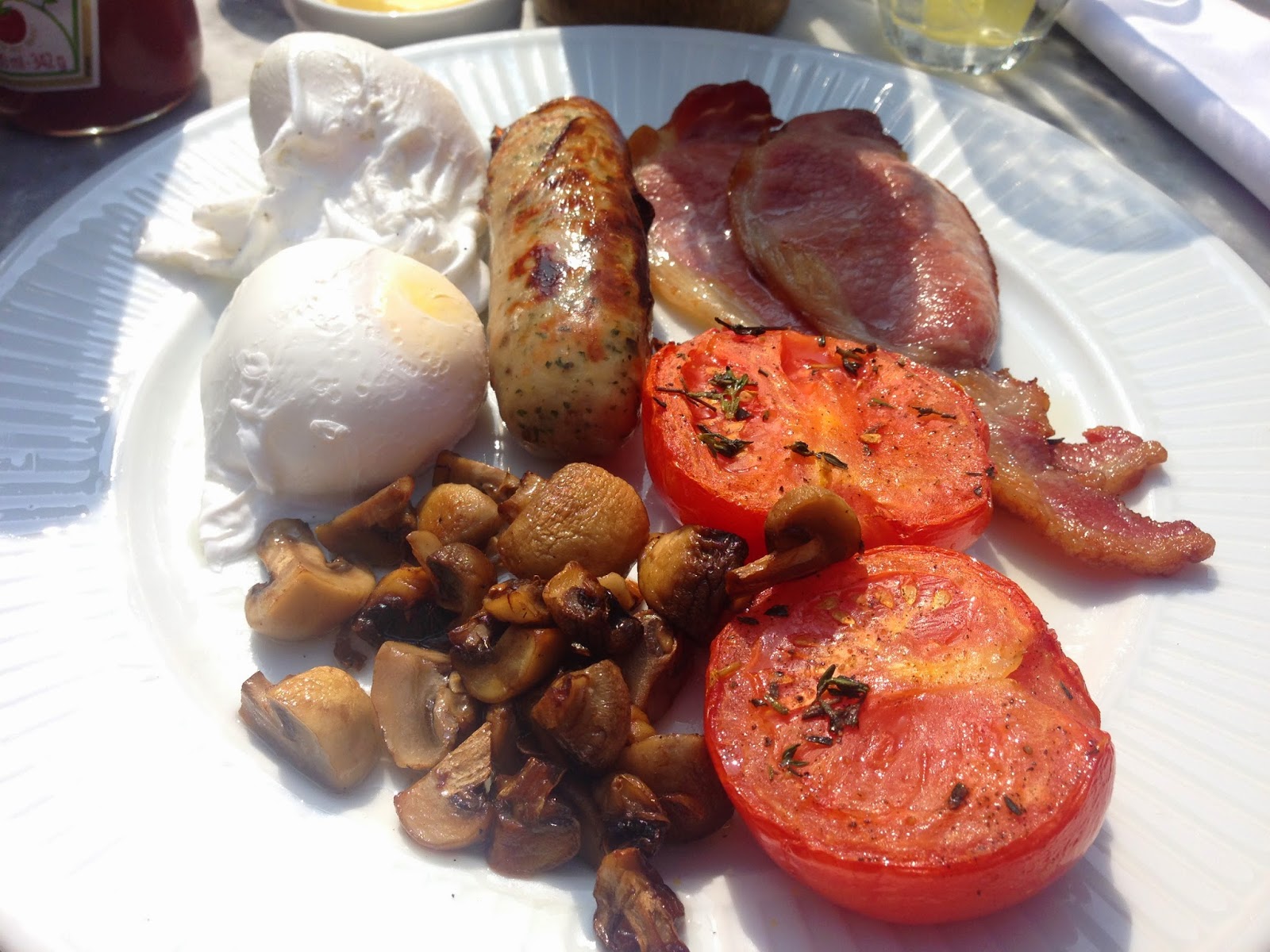 The chain restaurant that gets it right. I’ve eaten here on a handful of occasions and can honestly say I’ve never had a bad meal there. My friend Alice suggested going to try out their breakfast deal; fry up, toast, juice and a hot drink for £10- Bargain.

I enjoyed all of it (although the bacon wasn’t great) but for me it could never be a favourite due to the lack of certain crucial parts; no potato element, no black pudding and no beans.  The latter I can overlook, but the other two, for me, are a deal breaker in terms of elite status. I love the interior of the restaurant and they have a really lovely terrace out the back which I can’t recommend enough in the summer, it was where we ate our brunch and was just lovely. 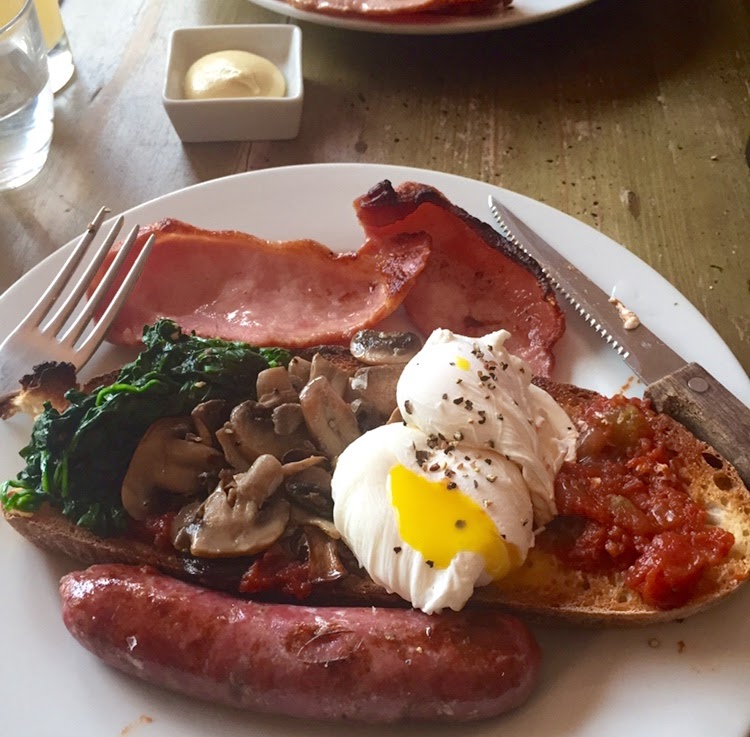 After perusing the menu online the night before visiting I knew that I’d be ordering this. Definitely more of a brunch dish than a breakfast, and missing all of the crucial elements just mentioned, I managed my expectations accordingly.

A gut buster it ain’t but it certainly filled a hole, and in a most pleasing fashion too.  From even one bite you could taste the high quality of the well cooked meat, the concentrated tomato chutney had soaked into the sourdough toast along with the runny yolks from the eggs- I never wanted it to end.  The only thing I wasn’t crazy about was the inclusion of spinach, it just didn’t feel right somehow, but it didn’t stop me from virtually inhaling it, obvs. All in all it was a good, solid brunch dish.

£10 is pretty much what I’d expect to say in a venue of this sort, I know some will do a sharp intake of breath at that, but quite frankly, you’re paying for the quality and ambience as much as anything else.  If you’re looking for a grease fix with all the trimmings for a fiver… well, there’s plenty of venues that’ll cater for you, but this isn’t really the one for that. 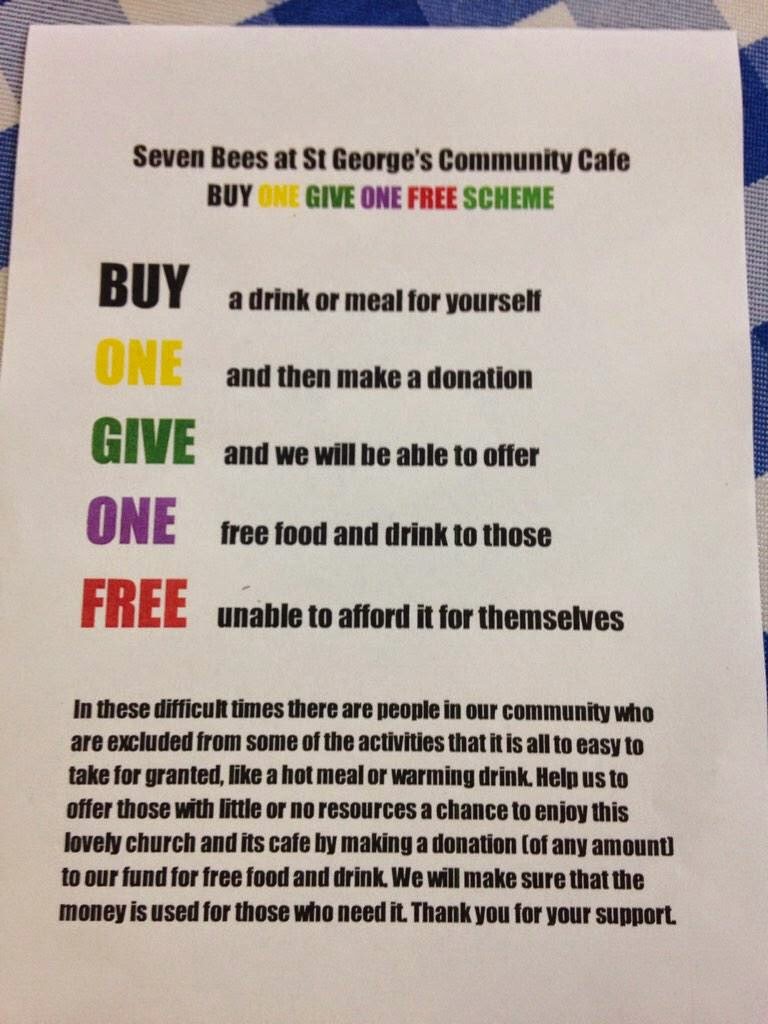 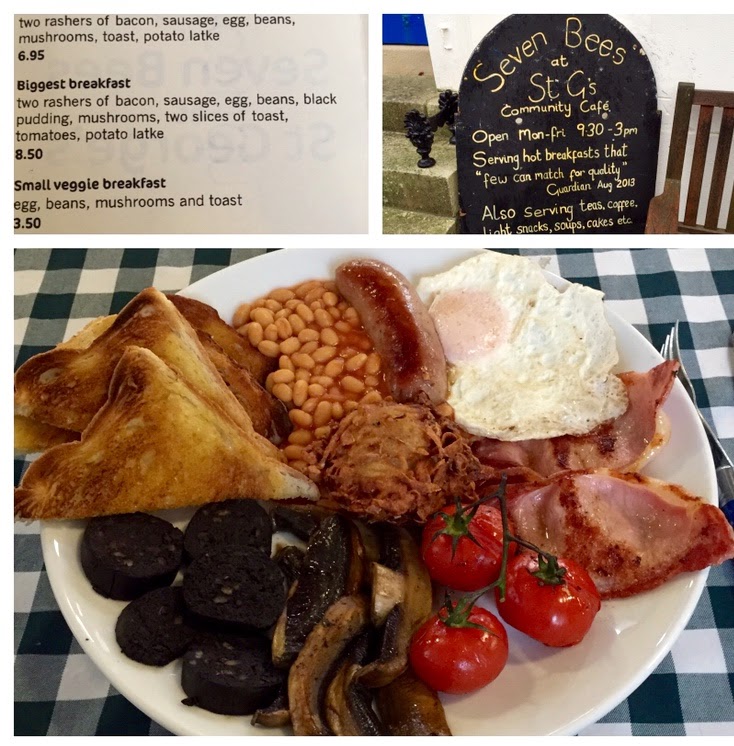 Having moved from their home in the lanes to a church in Kemp Town, the Seven Bees has remodelled itself as a form of social enterprise. The above leaflet pic explains better than I ever could. But in essence, if you are there, treating yourself, then treat someone who can’t afford it to a cup of tea, or if you can spare a few quid, then a hot meal. I think it’s amazing and wholeheartedly have, and will support it whenever I can.

It ticks all of the crucial element boxes and not only that, they were all cooked exactly to my liking too.  Portobello mushrooms cooked in butter and well seasoned, crispy potato latke which I dipped in the runny, free range egg yolk and really lovely quality meat and black pud. Definitely the same level as my beloved Joe’s, plus it’s a stone’s throw from my house and has the ‘feel good factor’ too.

Sadly it’s not open during the weekend, but if you get the opportunity to go, the do. And FFS donate, I think what Iain and the team at the cafe are doing is incredible- genuinely making a difference to so many people’s day, mine included. 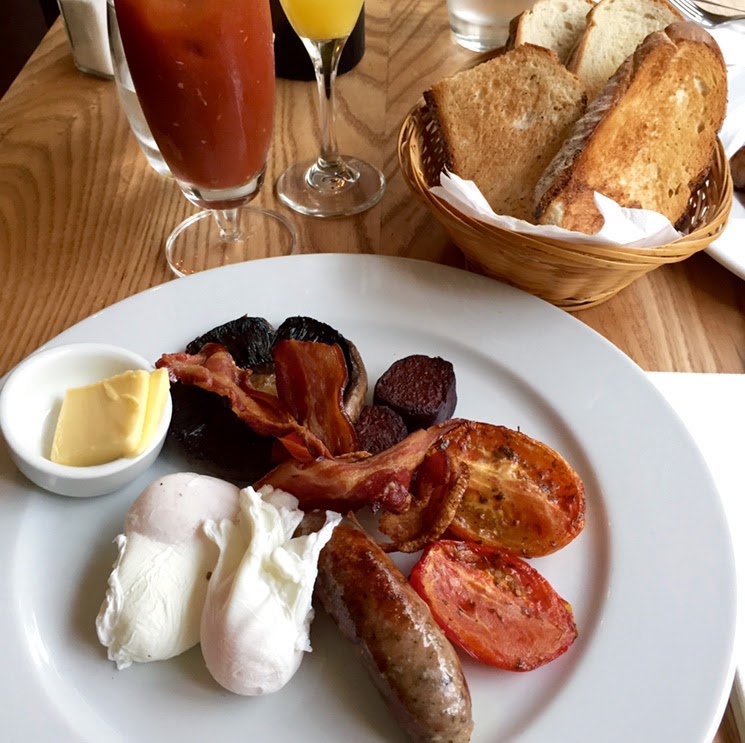 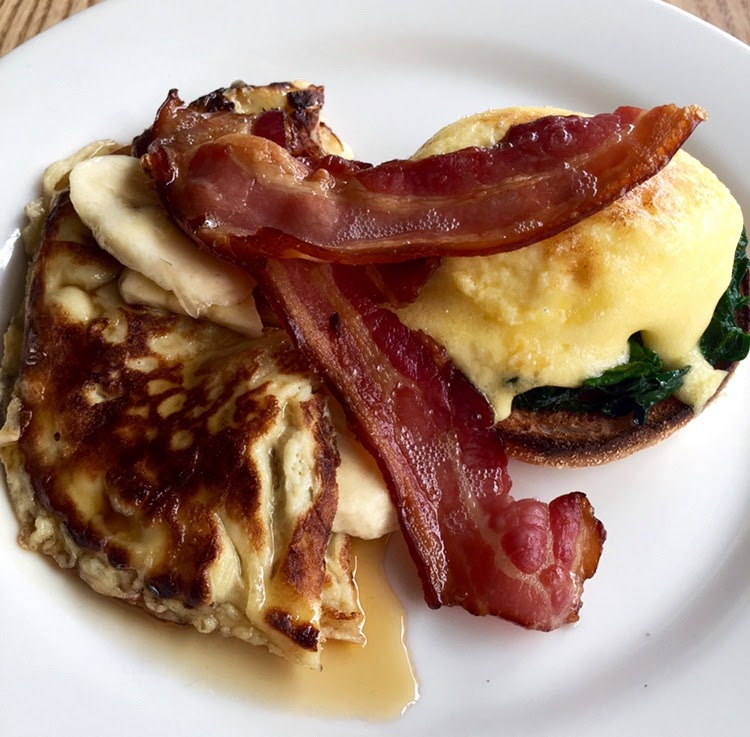 This is pretty much opposite Seven Bees, so also tantalisingly close to my flat. I’ve been there for both lunch and dinner with both my parents respectively, and also on a disastrous date, but I’ll leave that story there I think…

I went with my friend Sarah, and being the pair of greedy moos we are, we ordered four breakfasts to share between us. The fry up (£9.00) was nice, the black pudding was particularly good, but again was lacking in a potato element and beans, so didn’t tick all of my boxes. Loved that they used streaky instead of back bacon, unusual and extremely welcome.

After our ‘starter’ we shared and eggs florentine (£7.00) and a pancakes with bananas, bacon and syrup (£5.50), which they thoughtfully divided across two plates for us, both of which were gorgeous. We properly went for it drinking Bloody Marys as well as a comp Bucks Fizz and our bill came to £40, which is obviously extravagant for a breakfast, but we thoroughly enjoyed ourselves and I’d go back in a flash. A few others have gone there on my recommendation and all gave it a glowing report as well. 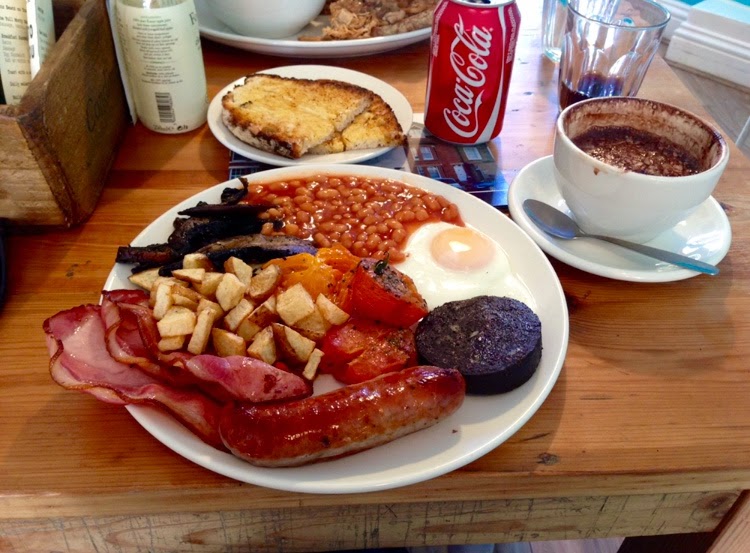 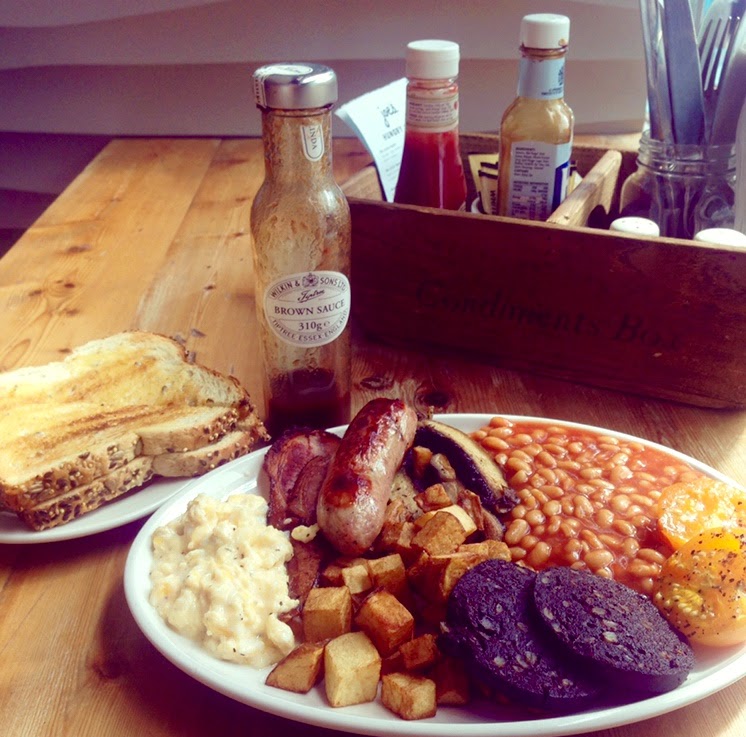 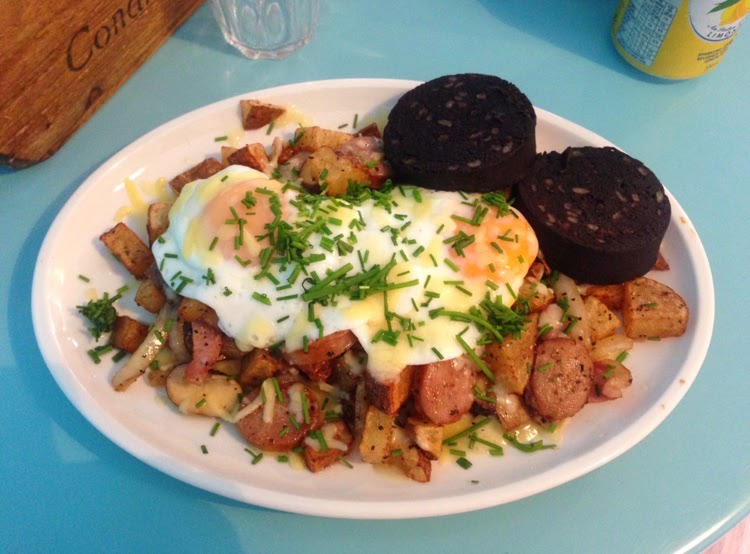 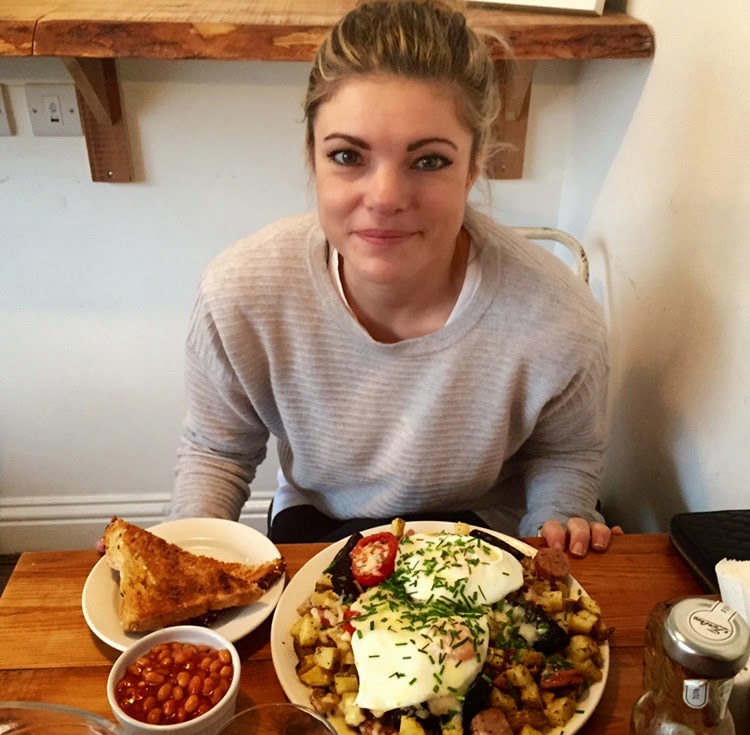 Four pictures may seem excessive and like favouritism, but in actual fact it’s just to show you all of the different options available.  The Biggest Breakfast will always be my go-to, with scrambled or fried egg depending on my mood, but the hashes are well worth ordering too. The bottom is hashageddon and as you can see, it’s an absolute beast, and yes, I did it eat it all.

I’ve been very open about my love of Joe’s, to the point of it almost being embarrassing! The staff and owners are charming, the ingredients are high quality, the interior is spot on and they have free wifi too- pig in shit territory right there. I’ve never had a bad meal there yet and have sent dozens of people their way who also have nothing but good to say. It’s a bit out of the way being up near Bhasvic College on the way out of Brighton, but it is well worth the trip. They’ve got their consistency absolutely nailed and I can’t recommend it enough.

So there you have it, my 2015 version of a full spectrum of Brighton breakfasts. Which one do you like the look of the best? Have I missed anywhere off that you think I absolutely must try? Please do comment below or tweet me, I’ve tried so many places now I’m running out of fresh ideas, so some new suggestions from you guys would be much appreciated!