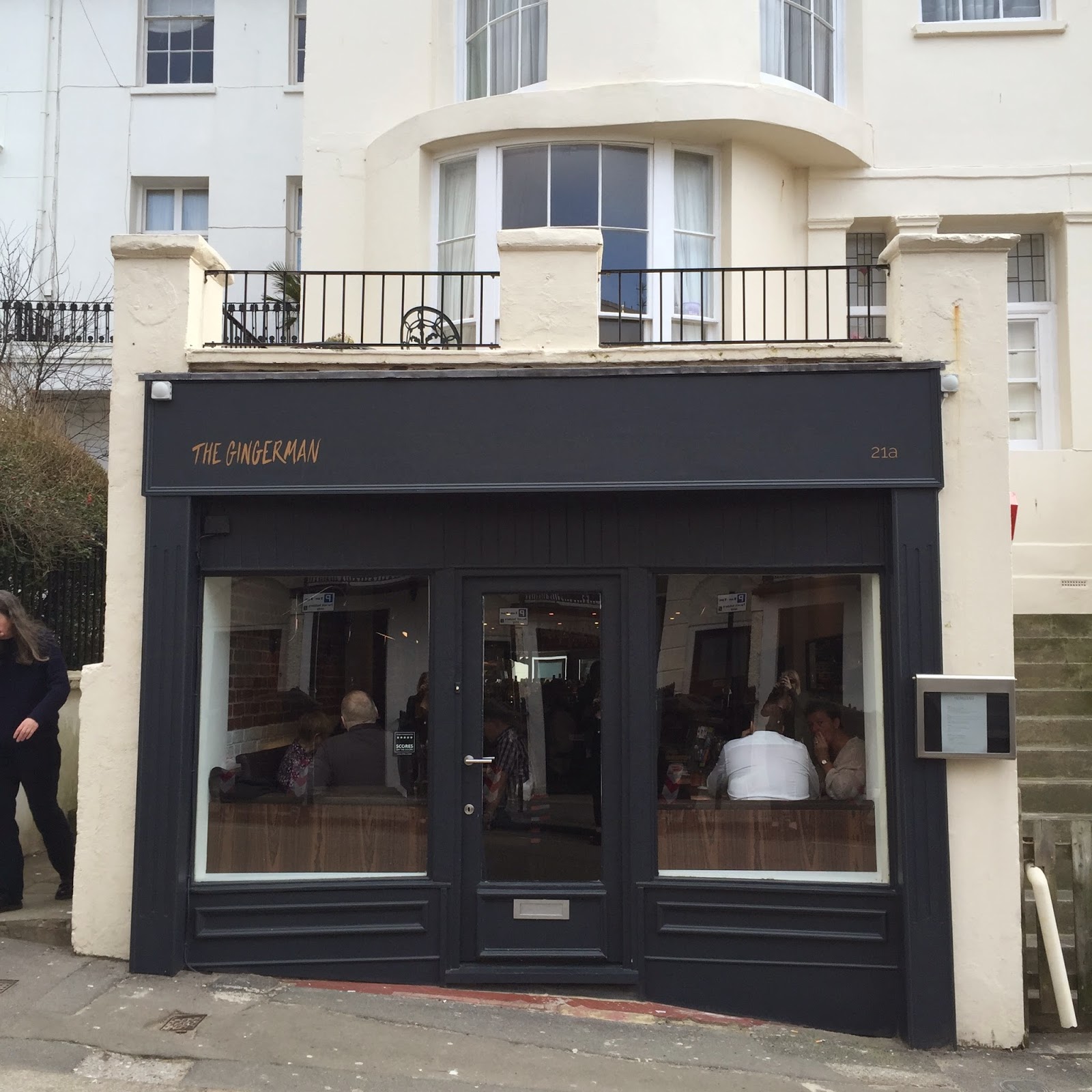 The Gingerman, and actually, the Ginger group and I go way back. My Dad used to take me to the Gingerman all the time when I was a teenager, in fact, I’ve been to them all more than once, other than The Ginger Fox and trust me, that will be happening soon.

The first and flagship of the group, it’s been going 18 years and owners Ben and Pamela McKellar decided that it was time to give their firstborn a facelift at the start of the year, and very kindly invited me to their press* launch aka a long boozy lunch, which I didn’t hesitate to take them up on, obviously. 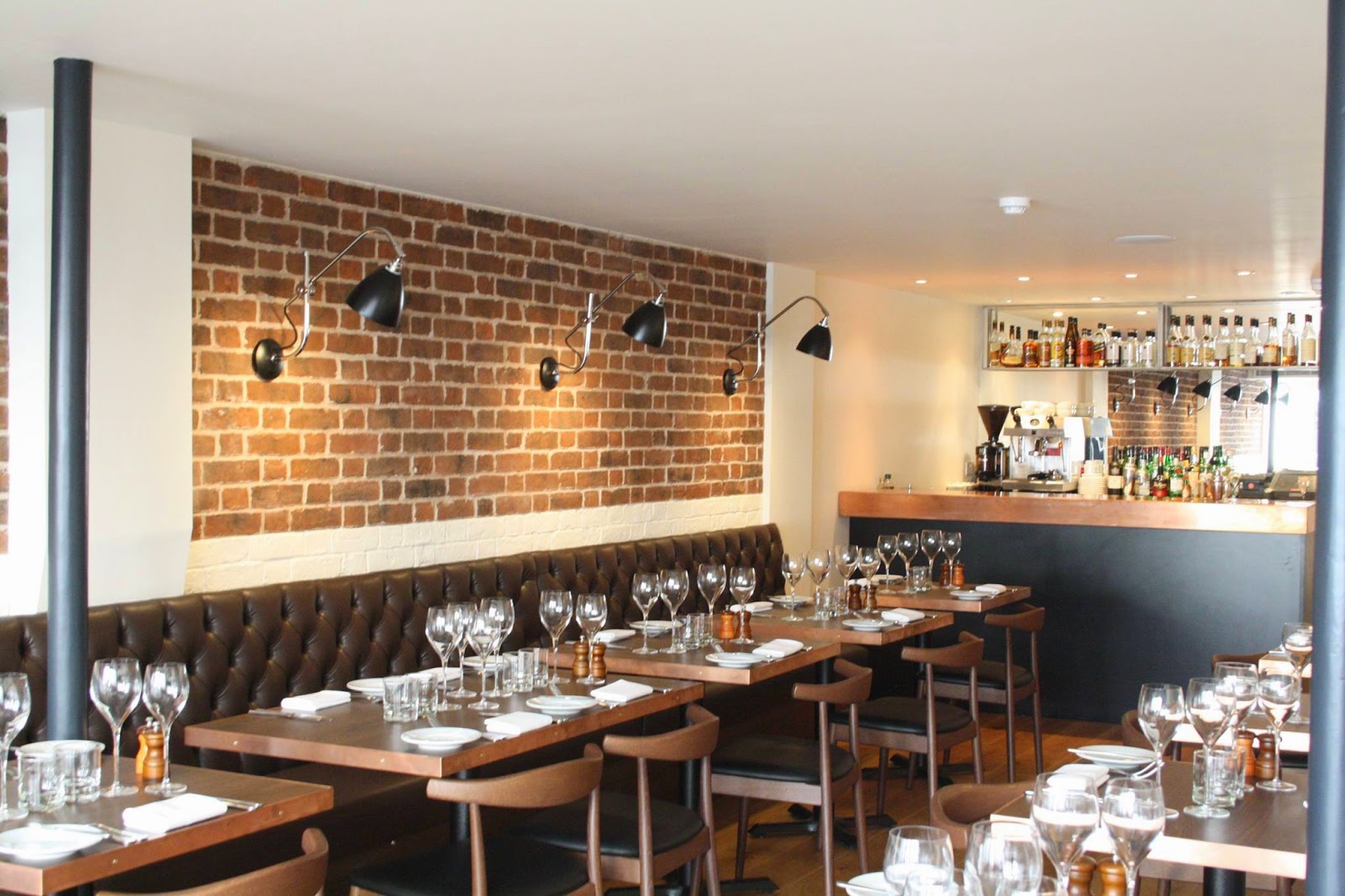 I love what they’ve done, it’s been a few years since I’d seen the interior, but I remember it feeling more formal and it definitely seems much lighter and more modern now. I think the new look reflects the food perfectly; tasteful, classical and simple- basically my favourite kind of dining.

*I took the above photo from their Facebook page with their permission. 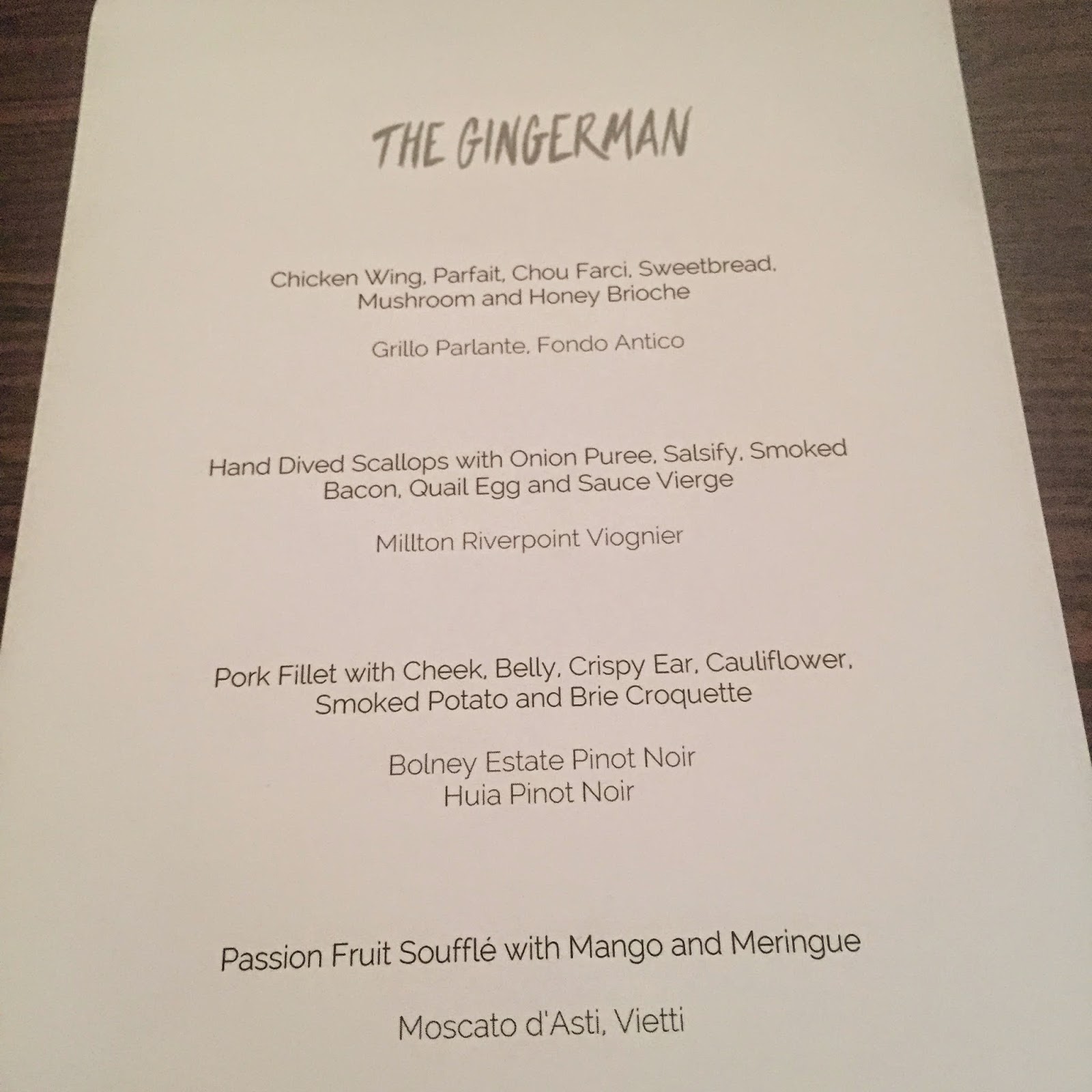 I would definitely say what’s served here falls squarely under the heading of fine dining.  They don’t market themselves as a fine dining restaurant, no mention of it at all in fact, unlike the slightly awkward way other places (which shall remain nameless) in Brighton do.  They just quietly let the food speak for itself, and trust me when I say, it doesn’t just speak, it sings.

I’m not going to pretend I know anything about wine, because I don’t. This has been a bitter disappointment to many people in my life. I’ve tried, really I have, but wine just doesn’t agree with me. However, because this was an event where wine was given equal headline billing with the food, I felt I ought to make the effort to take notes*, and for what they’re worth, relay them to you. Don’t ask me questions about wine though, I won’t know the answer!

*my notes on each wine are underneath each course in bold, they get more wordy and less sensical the more wine I drank, sorry about that… 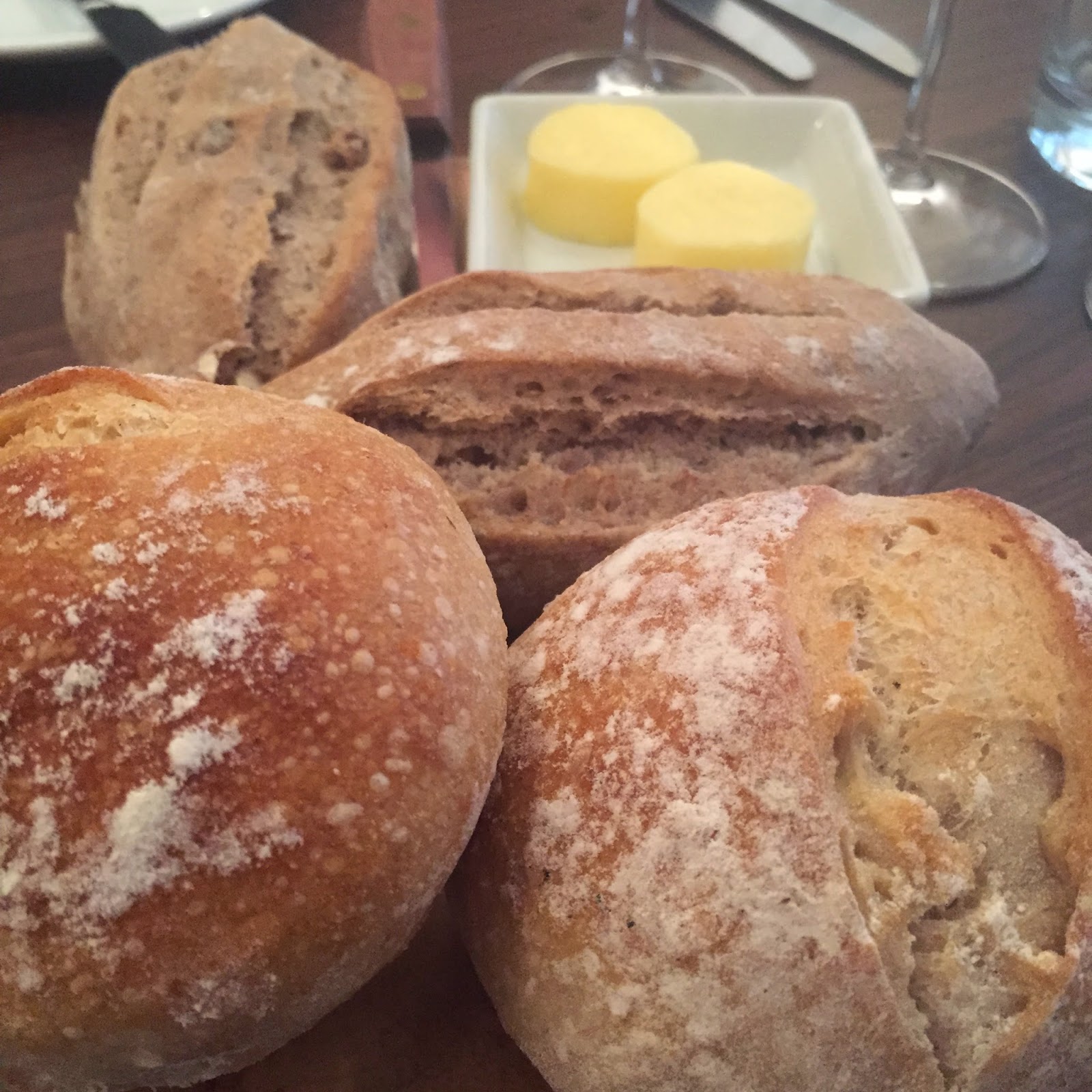 The warm from the oven rolls came with fresh truffle butter- which was just. so. truffly. and decadent. It didn’t pussy-foot about, the truffle made its presence felt, and most welcome it was too. I ate a lot, slathered all over the fresh bread that came with it. 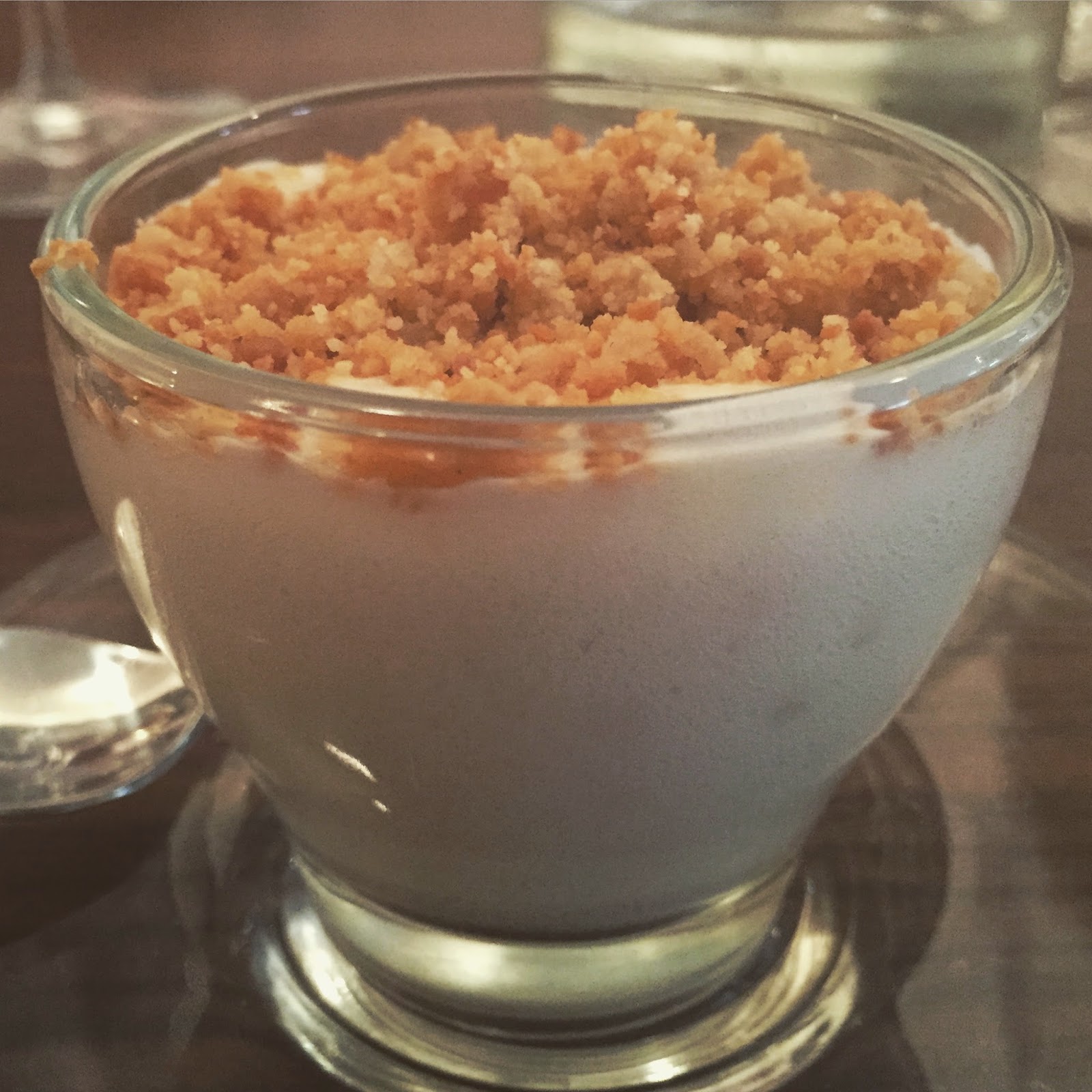 This was whipped, light, and tasted like cauliflower cheese in foam form, but not in an annoying poncey foam way, in a delightful way. It was then elevated to spectacular status by the bacon and parmesan crumble scattered over the top.  It’s actually from the current a la carte menu (everything we ate that day was) and although I almost never pick the soup option in proper restaurants, I’d be happy with a full bowl of this as my starter. Truly special, and it’s not often you can say that about a soup. 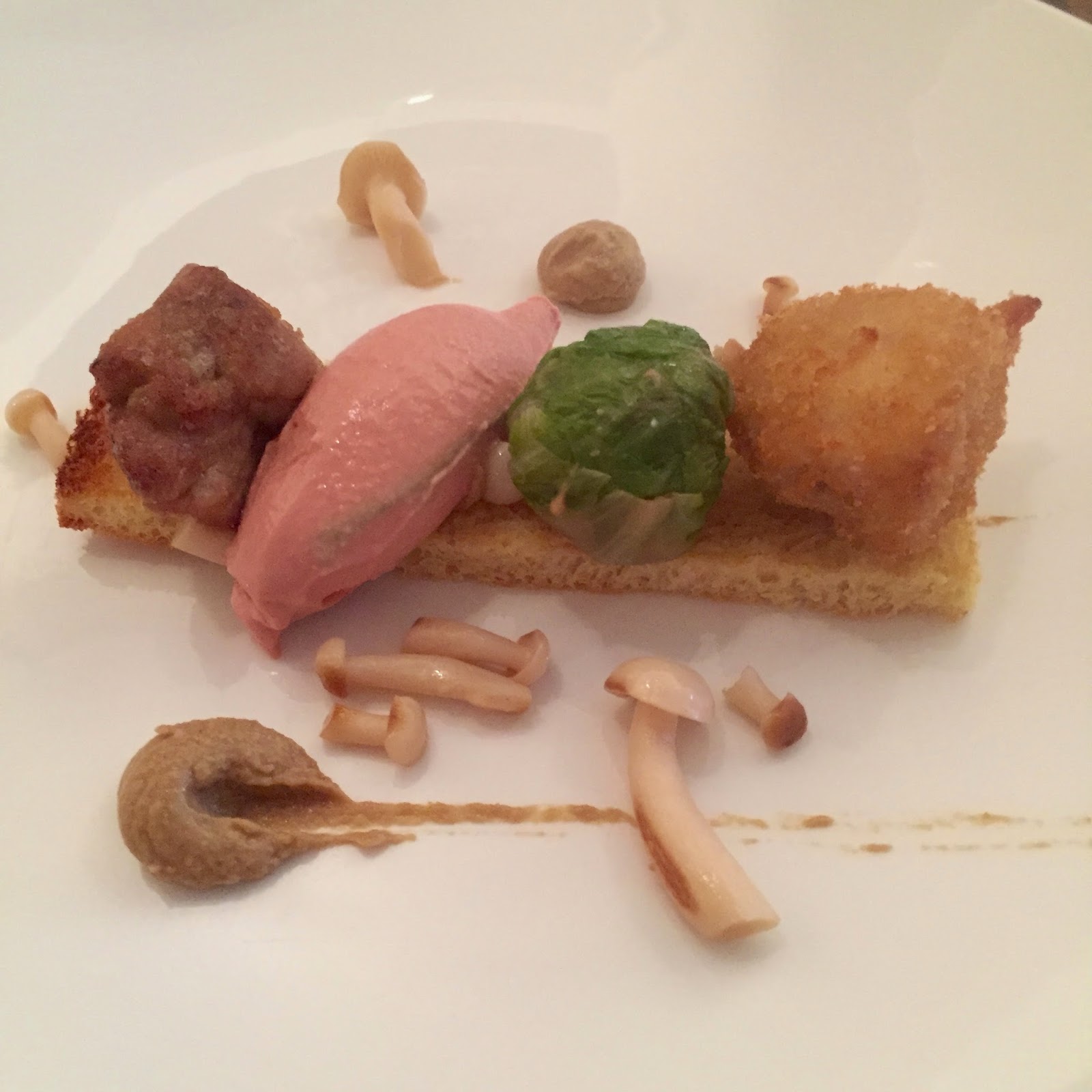 The veloute was always going to be a hard act to follow, but this was even better. From right to left;  The chicken was panko battered and flavoursome in the way you can only get with darker meat.   The cabbage parcel was filled with steamed minced meat, bound together with herbs- I loved it.  If there’s one thing I am really not a fan of, it’s meat paté, especially the smooth kind, but I even enjoyed the parfait. I wouldn’t say that it’s changed my mind about it over all, but it just goes to show that there really is an exception to every rule. Some people get really grossed out at the thought of eating sweetbreads (pancreas and thymus glands), but I have no qualms at all about doing so. It had a gorgeous crispy crust, and was so rich in flavour, there was nothing not to enjoy about it. 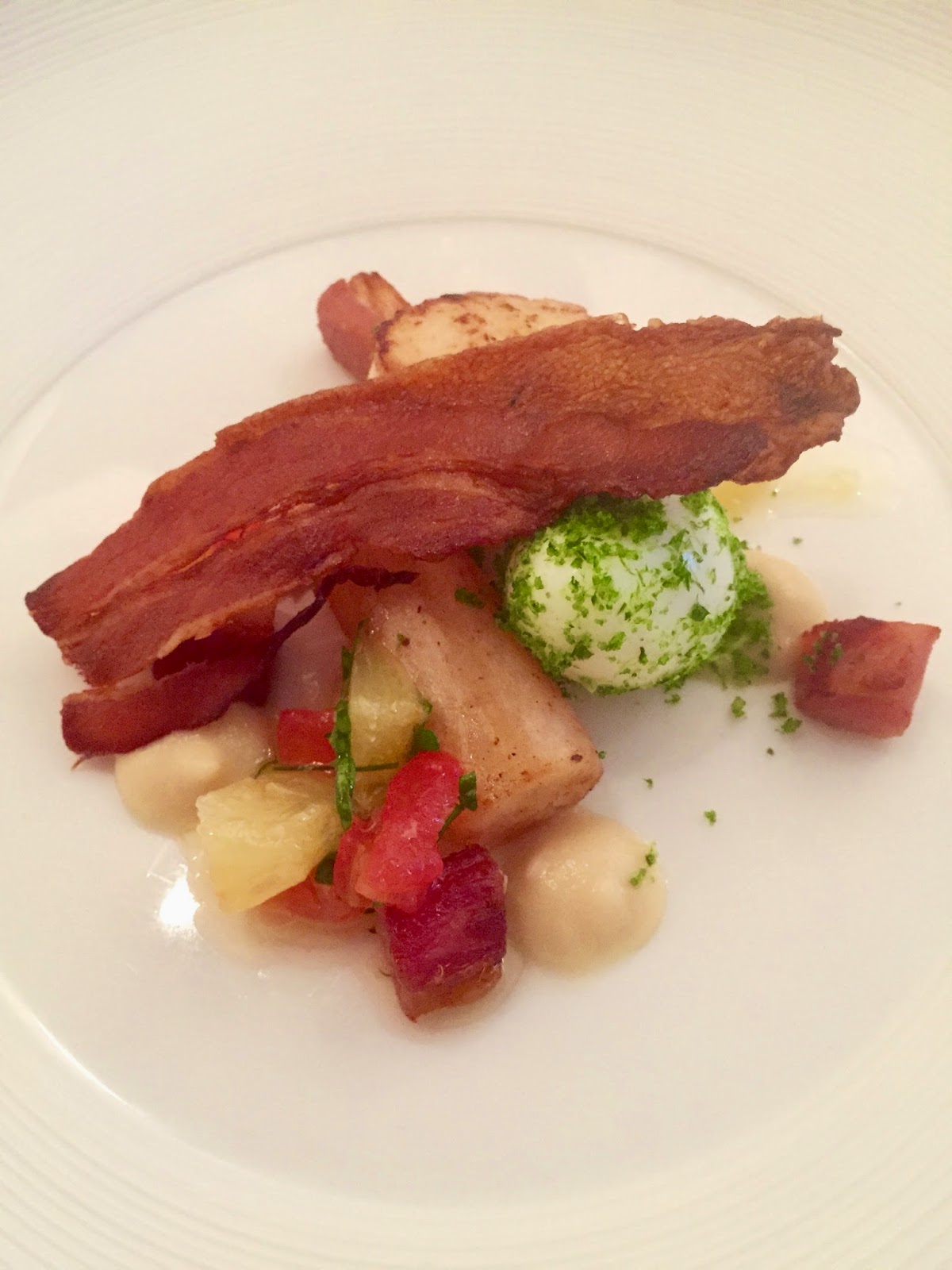 Soft and fresh they were possibly the best scallops I’ve ever eaten. It momentarily took me back to the scallop dish that I had at a ‘fine dining’ restaurant in Brighton recently. I said at the time it was totally ordinary, and Gingerman’s offering has just reinforced this opinion.  The sauce vierge was tart and fresh. I love salsify, it’s texture isn’t dissimilar to beetroot but none of the gross taste and this one was caramelised outside too. Just lovely.

Milton Riverpoint Viognier- New Zealand from hemp to preserve the complexity (or something). Aromatic and peachy. 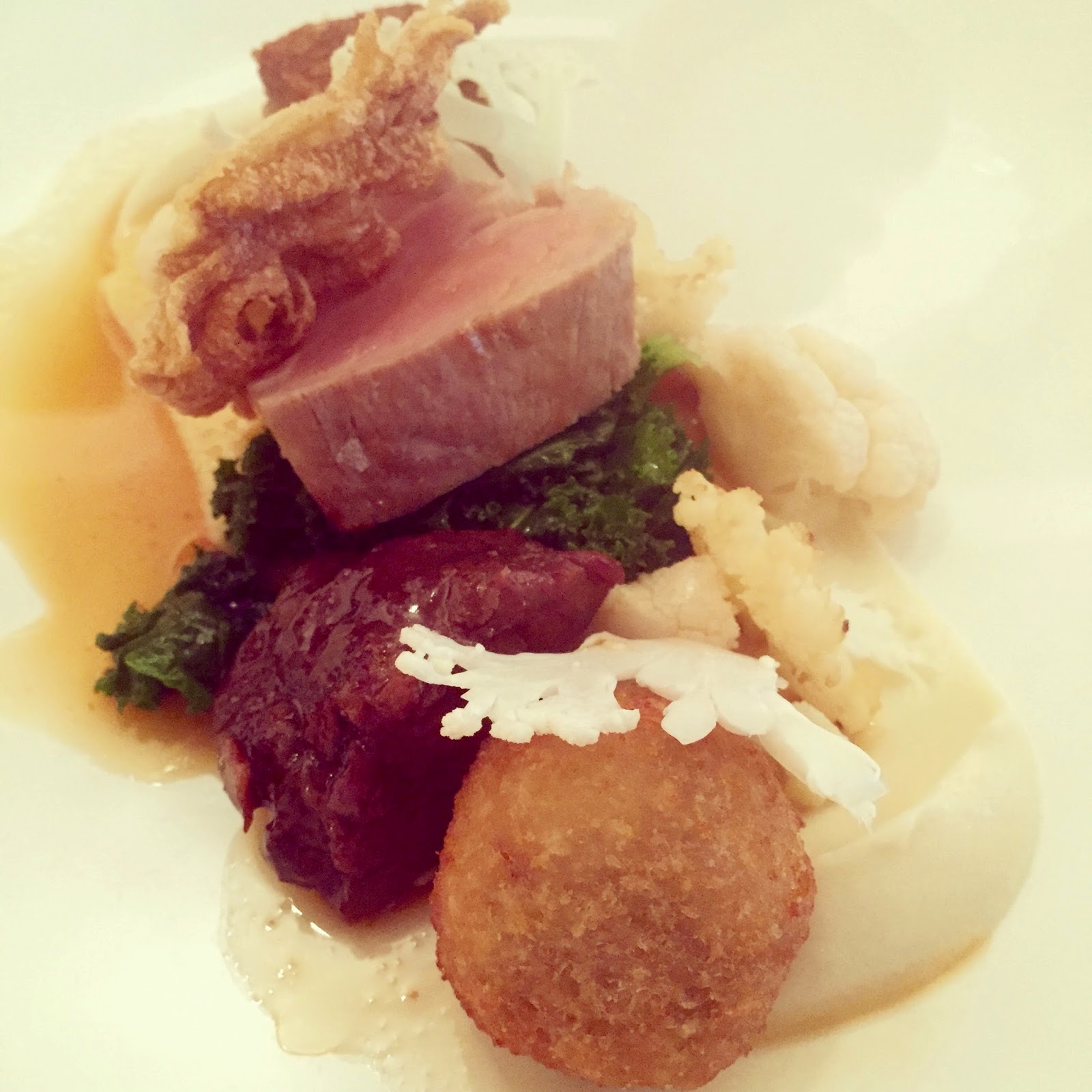 The pork fillet was blushing, and, although I wouldn’t necessarily have the confidence to cook it like that at home, there wasn’t a second’s hesitation about eating it. It was so tender and my knife sliced through it like butter. The pigs cheek collapsed with the slightest nudge of my fork, and was sticky and concentrated in flavour, seriously delicious. The crispy ear was crackling esque and I could’ve and would quite happily eat a huge bowl of it with a cold beer. The cauliflower three ways could have been accused of showing off, but I liked it, I liked the whole thing. Full marks for the main course. 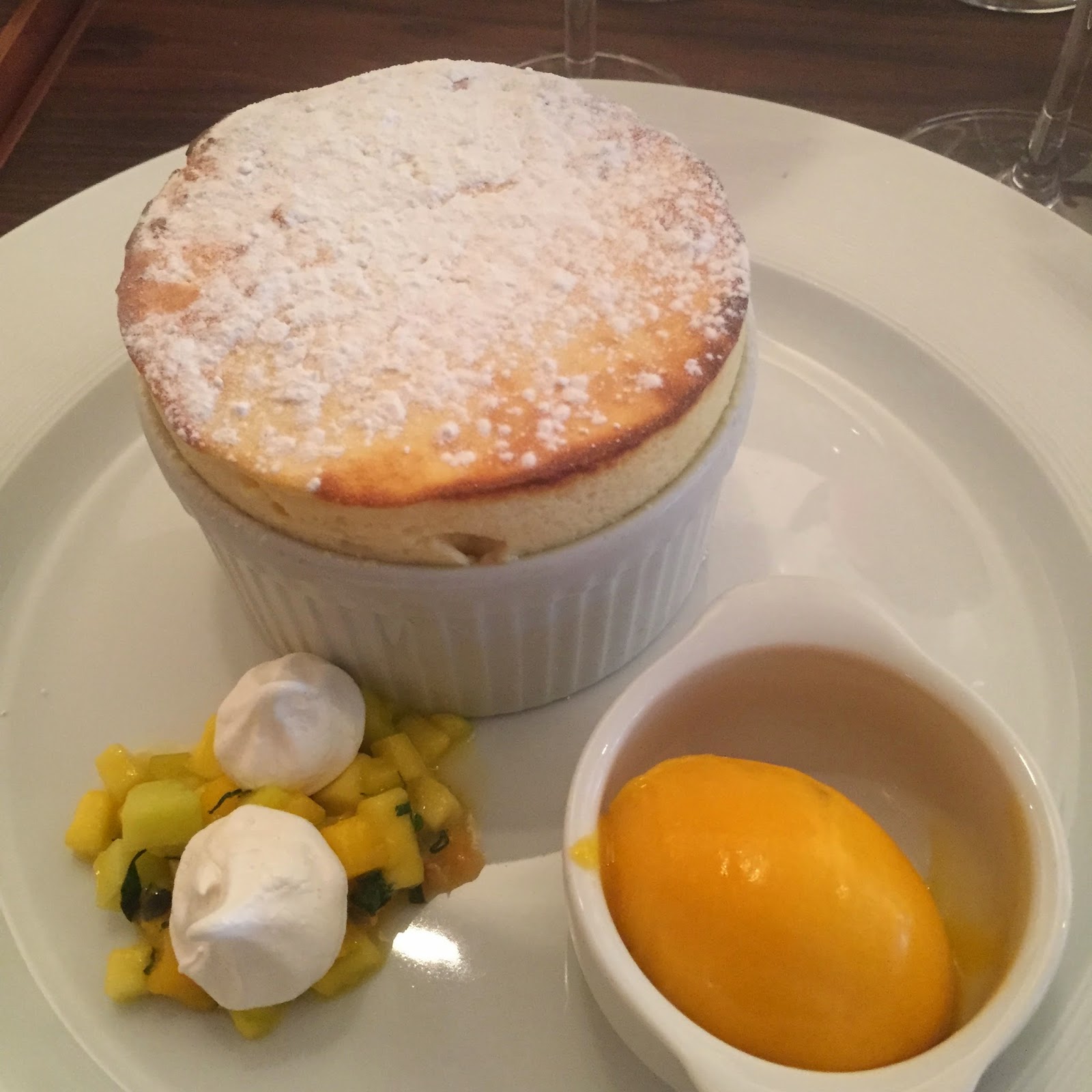 I don’t often see soufflés on the menu when I’m out for meals, but when I do, I almost always order them. The best one I’ve ever eaten was in the most beautiful restaurant in the cliffs in Corsica- pistachio with a molten salted caramel sauce that was poured over it at the table, in case you’re wondering. I’d say this came a close second, the rise on it was enviable and the inside was just dreamy and light, the passion fruit flavour coming through just the right amount. The chefs in that kitchen must have a serious set of nuts on them to contemplate serving over 20 of them at once, two of which were for their bosses!

The sorbet was like a silky, frozen, mango ganache, and in a way was even more mango-y than the chopped fruit with mint on the side. The perfect conclusion to a brilliant meal.  The wine that was served with it was SO good, I’ve actually just been having a scout about online to try and get my hands on a bottle, that never happens.

So in summary: It’s the kind of food I love best- serious stuff done with the ingredients while allowing them to retain their essence, for me, it’s a total winner.  Jamie was looking after us and he was great, so charming and funny- exactly the sort of person you’d want front of house. The loos were clean, tasteful and even had a basket of… ladies products in the cubicle. Price wise it’s not going to be the cheapest meal of your life, especially if you want wine, but it’s far from extortionate, and whatever you pay it’ll be worth it. They do a three course lunch menu for £23.50 which is well worth a look too. All in all, I’m a huge fan.

Have you been to any of the Ginger restaurants? Which is your favourite and why? Please comment below or tweet me.