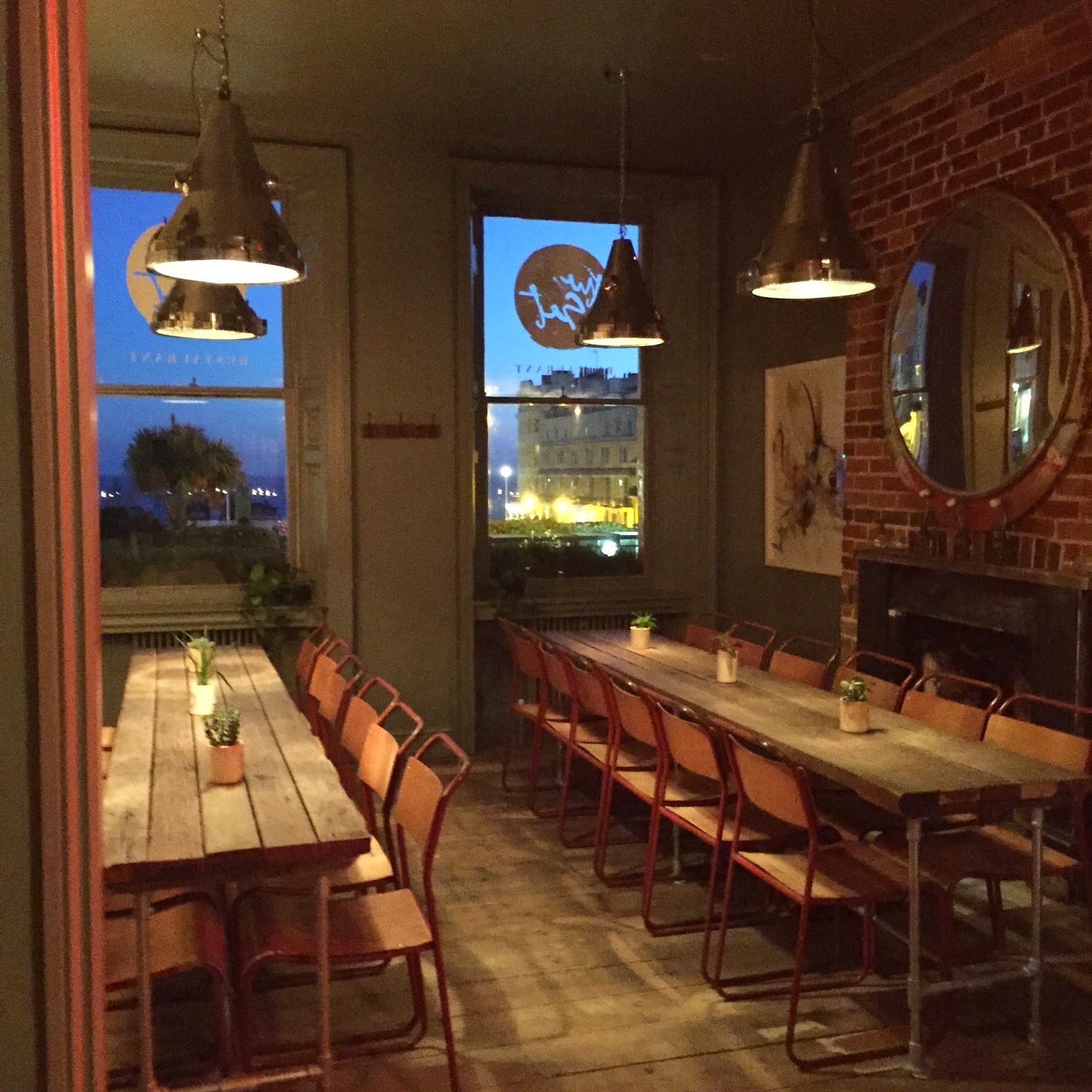 It’s always a tricky thing reviewing somewhere that’s just opened, in its very first week of opening no less. I find it harder to venture an opinion when I know how new it all is for the entire team, so please take this as an overview, rather than a full on review.

Both experienced and talented chefs, matriculating from the ‘Ginger’ school of fame, Semone Bonner and Dan Kenny are the guys behind The Set, a company which started out as several pop ups before setting up home (see what I did there) at Artist Residence Hotel in Regency Square. I think teaming up is a good look for both parties. 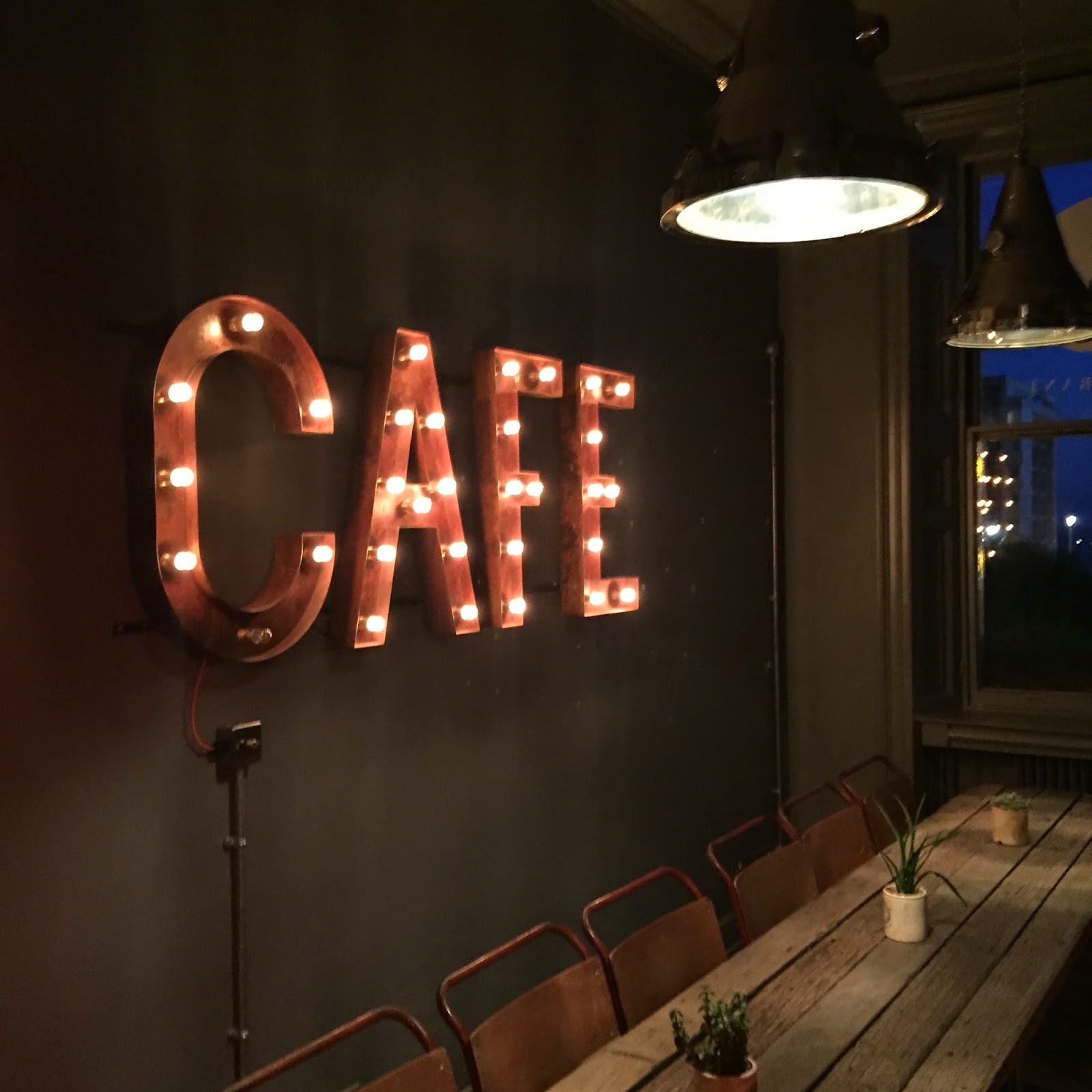 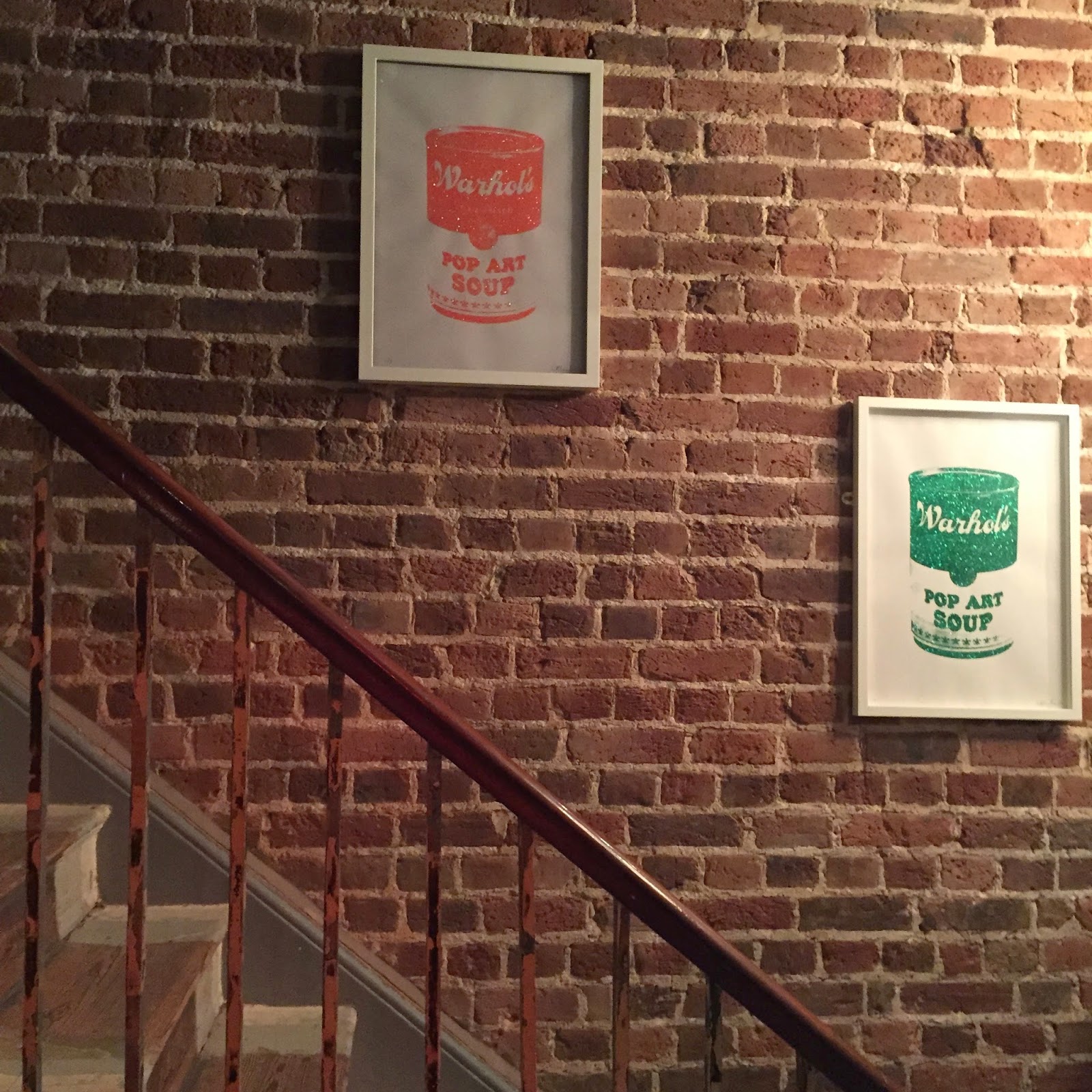 I really like the venue as a whole. It’s cool and edgy but not in a wankerish or hipster way. I think it’s much nicer than its neighbour, The Pelirocco, but then it’s brand new and a totally different vibe.

They have the bar area where they’ll be serving ‘dirty fish burgers’ and if you’re in the mood to get boozy, Cocktail Shack, the adjoining bar to the hotel, serves seriously good drinks. 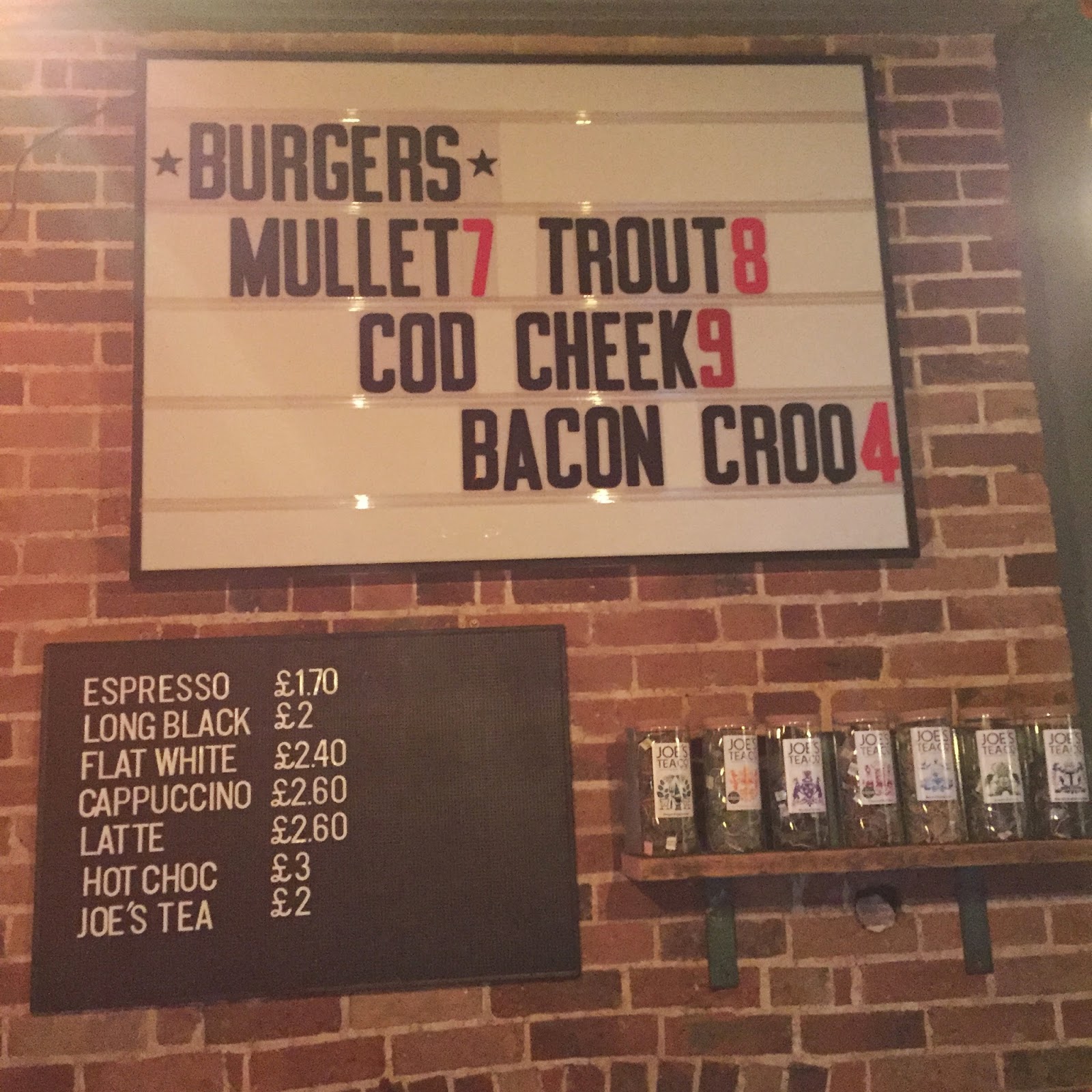 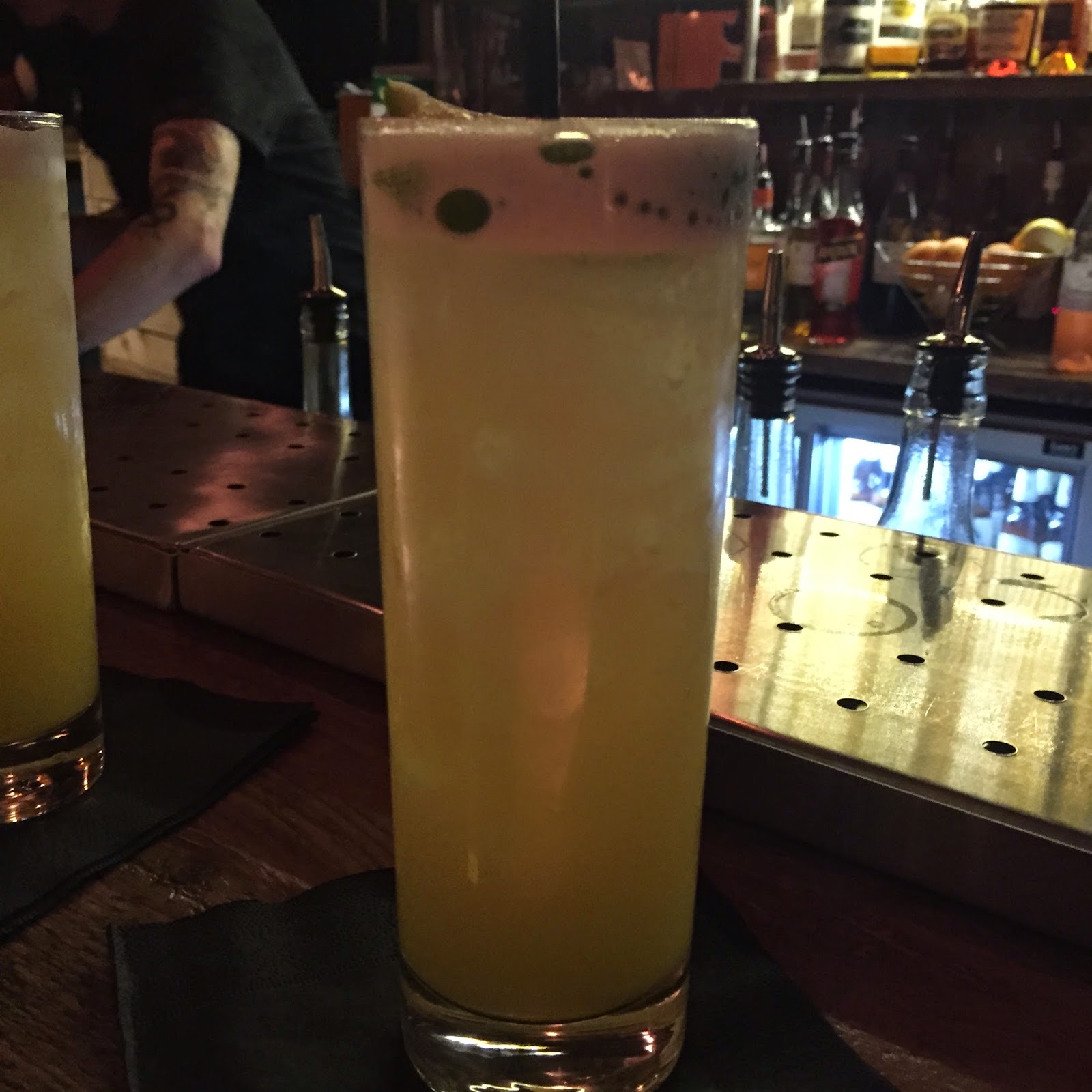 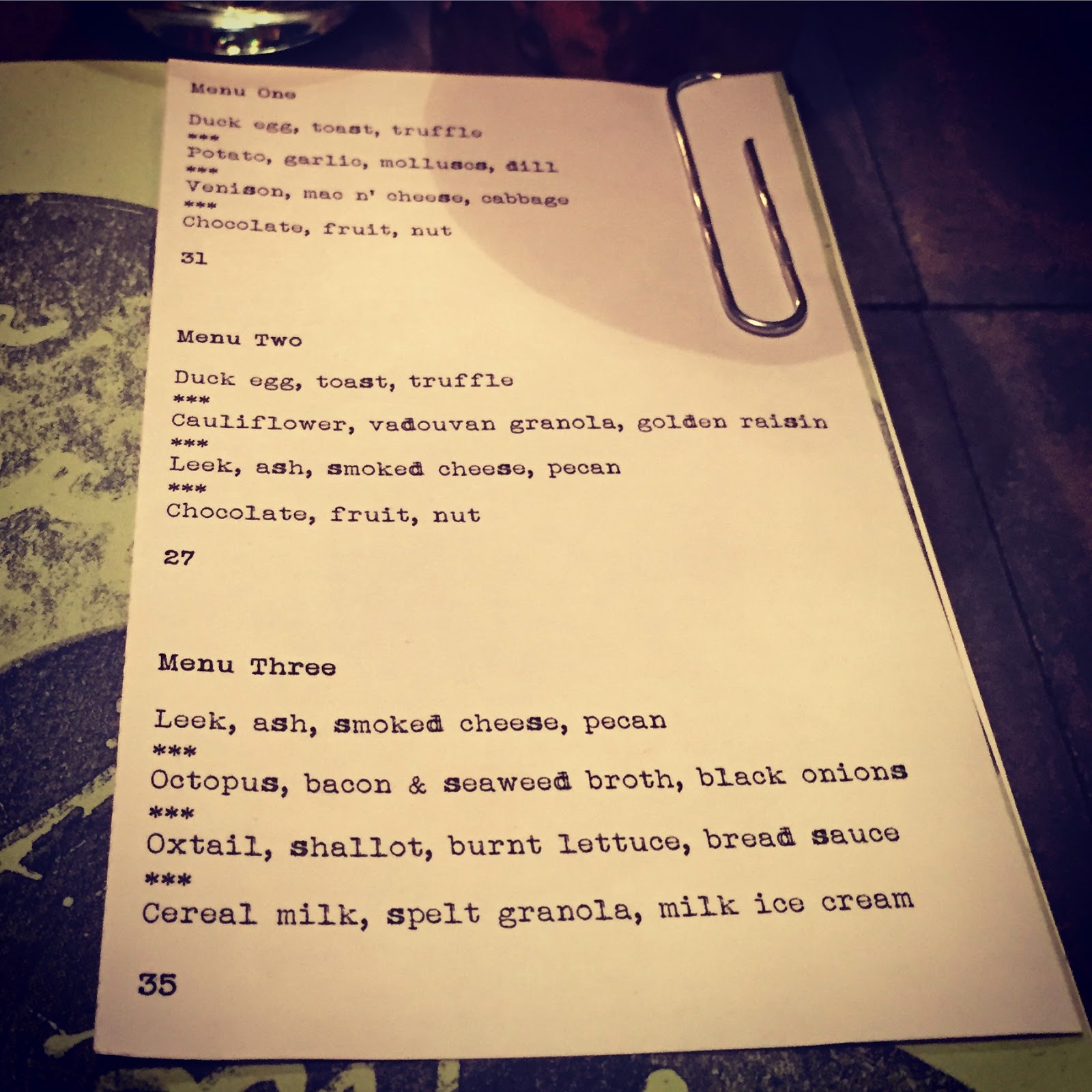 Being the keen social media-er that I am, I’d obviously given this a thorough stalking online at various intervals throughout the week and I knew that the first menu was the one that I wanted, closely followed by the third. Menu 2 was for veges, but let’s be honest, I was hardly going to go for that in favour of all kinds of glorious meat, now was I?

Just look at those prices, very reasonable indeed, I think. The ‘wine flights’ (below) are going to be priced at £15, £20 and £25 respectively , which when you add up even the most expensive food and wine options, it’s still only coming out at £60 a head. If you went to any other restaurant you’d end up paying £30 or so for a nice bottle, or even more in glasses. So if you think of it in those terms, it really is a bargain. 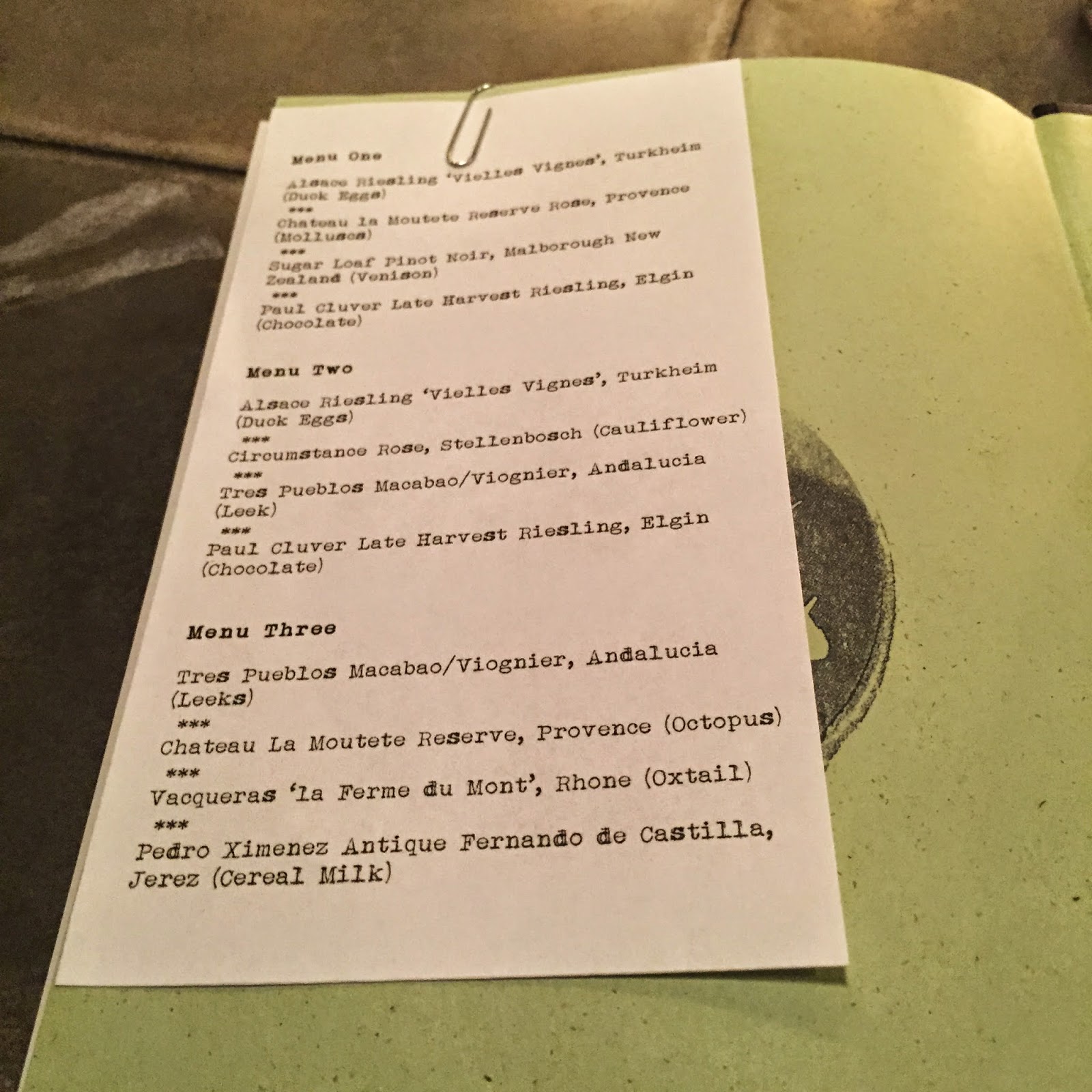 As ever, I’m not going to try to pretend to know anything about wine, but the sommelier really did explain it to us so beautifully, I feel it deserves a mention. I particularly liked the way he described how the wine was ‘on the nose’ and then ‘on the palate’. For someone who couldn’t have less interest in wine (me), he made it interesting and demystifying.

I did take notes on each, but as a summing up (as I really don’t have any idea what I’m talking about), I happily quaffed all of them and they did indeed complement the courses they were matched to, the dessert wine was my favourite. They were all good though.

My second five course meal with wine matching in eight days, and I’ve smashed my way through 12 types, impressive for someone who fainted in a loo cubicle in Sardinia after two glasses a few years ago. My liver has obviously given in a bit. Oh good. But yes, if you like wine, you’re in for a right treat. 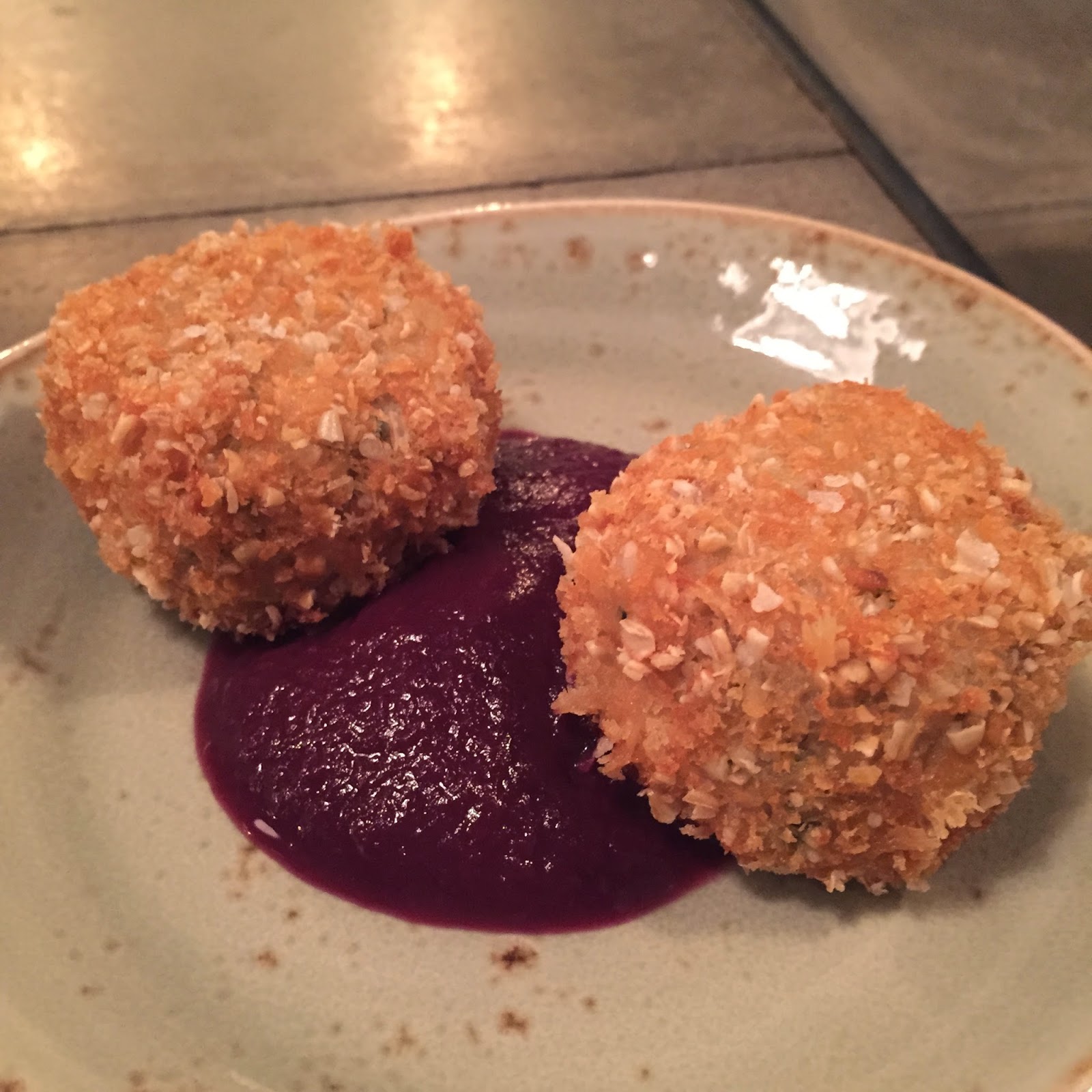 I really enjoyed these, and the ketchup. Rather than being a chunk of chicken breast as expected, it was more of a kind of ‘pulled chicken’ with a herb we thought may be thyme and a very slightly sour taste to it. Grown up chicken nuggets and ketchup, thumbs up. 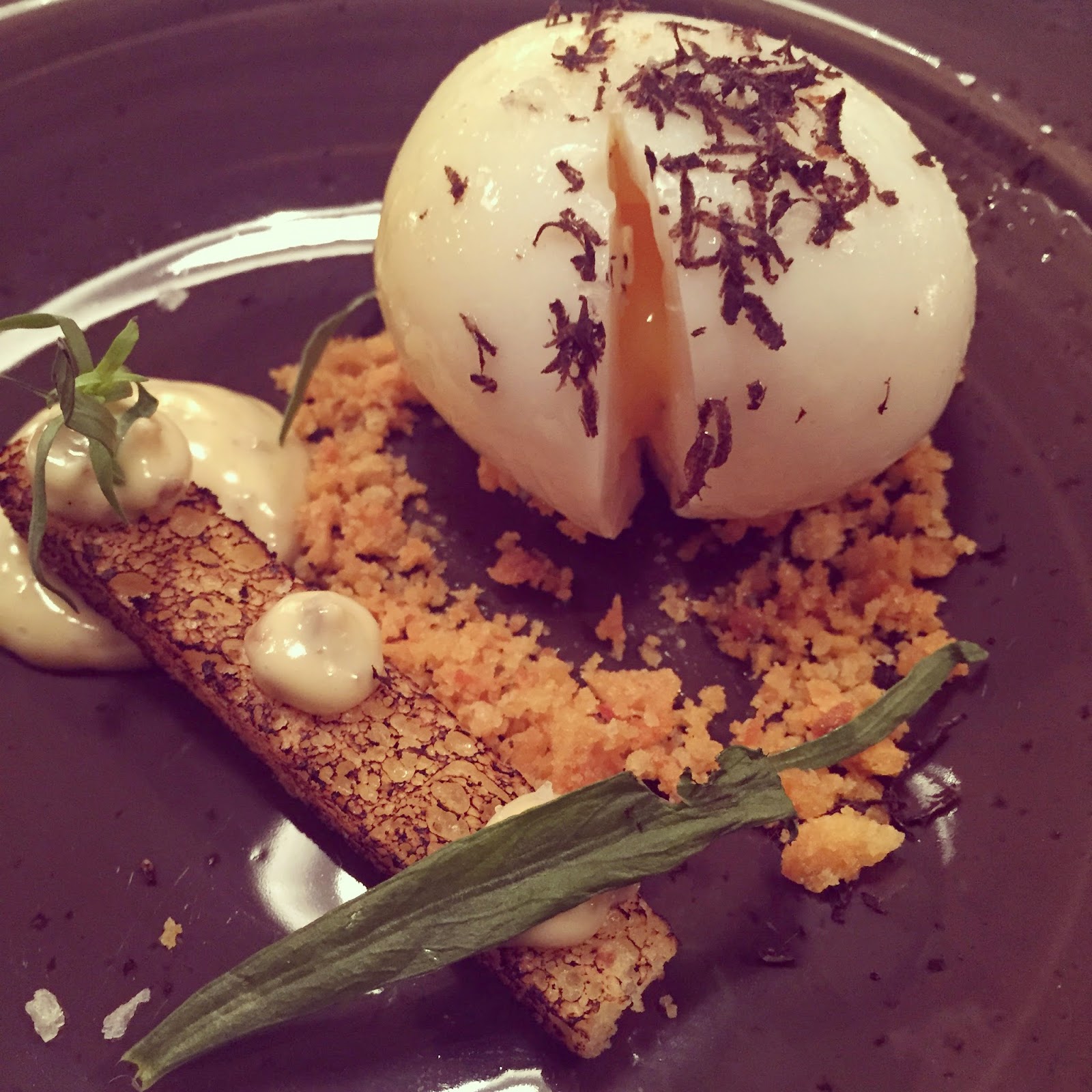 The egg was soft set but not overly runny and the truffle scattered over added a delicious and decadent dimension, but I wasn’t mad on the mayonnaise flavoured with it.  The brioche tasted of sweet charcoal, which was interesting, in a good way. Overall it was ok, I was disappointed by a similar dish at Plateau recently, so maybe my tastes are changing. 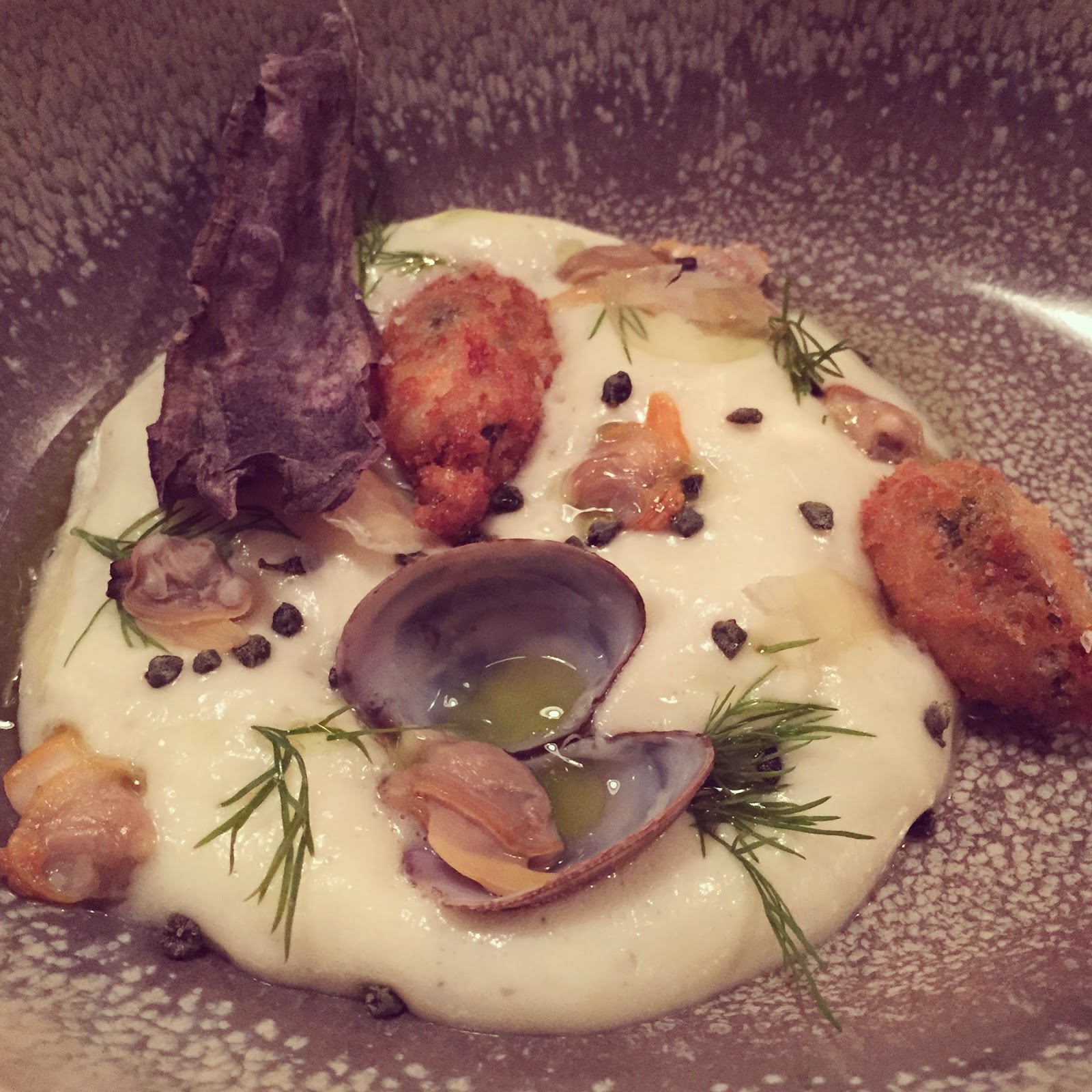 When I read molluscs I was imagining snails, but it actually turned out to be shellfish, and my least favourite of all the courses. The highlight was the parsley coated mussels, the herby flavour really came through for me and the innards were bouncy and cooked to perfection.  Other than that, it didn’t do it for me at all, particularly the capers. I love a caper, plump, juicy and vinegary, so if you take all that away, what you’re left with is… the dehydrated ones that came with this dish. 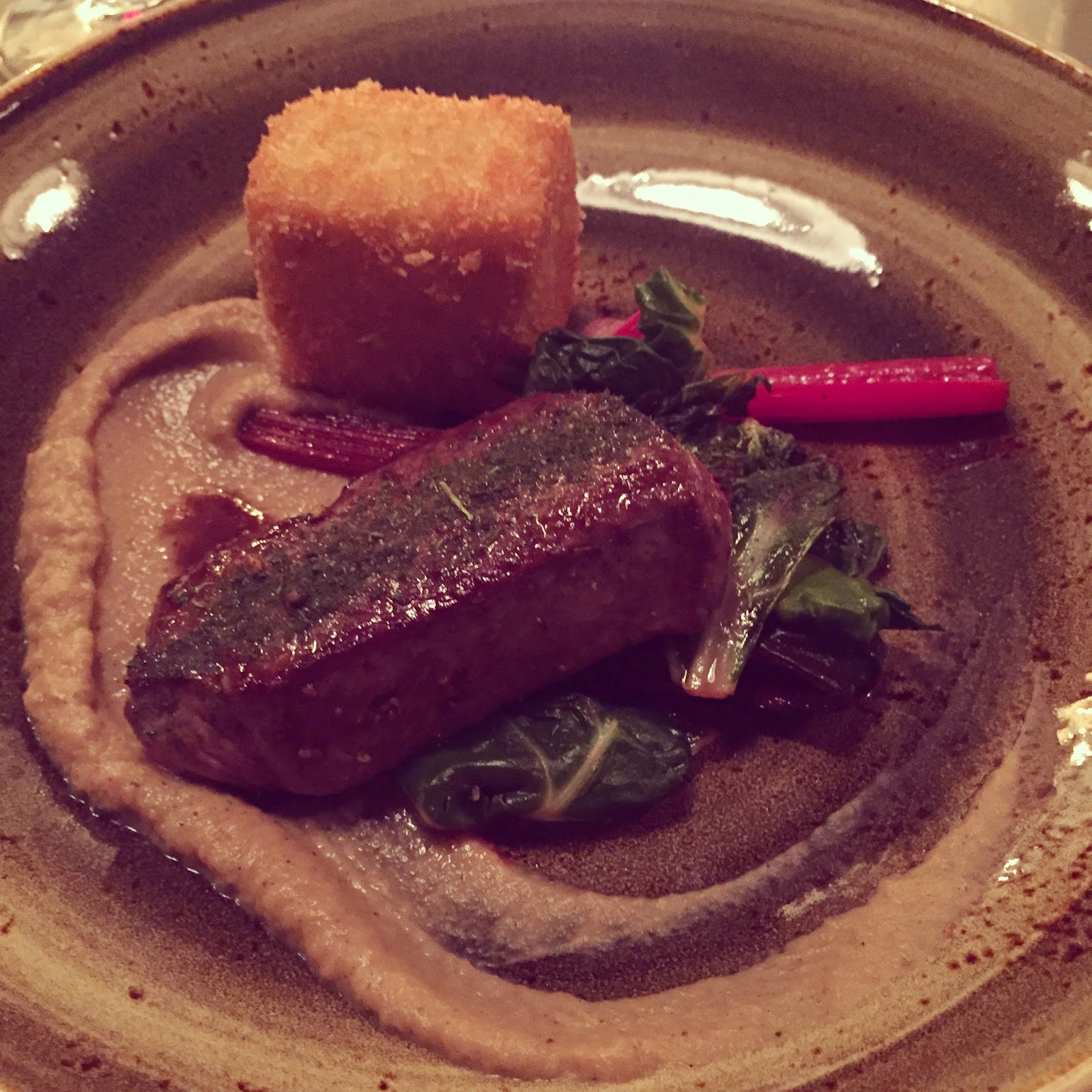 If it was a cow it’d still be mooing (what noise does a deer make?), just the way I like it. Really beautifully cooked and sprinkled with a herb neither Patrick nor I could distinguish, and actually turned out to be kale powder. The puree (which turned out to be charred cabbage) was neither hot nor cold, I could forgive it though, because it tasted good and was a great companion for the meat juice. 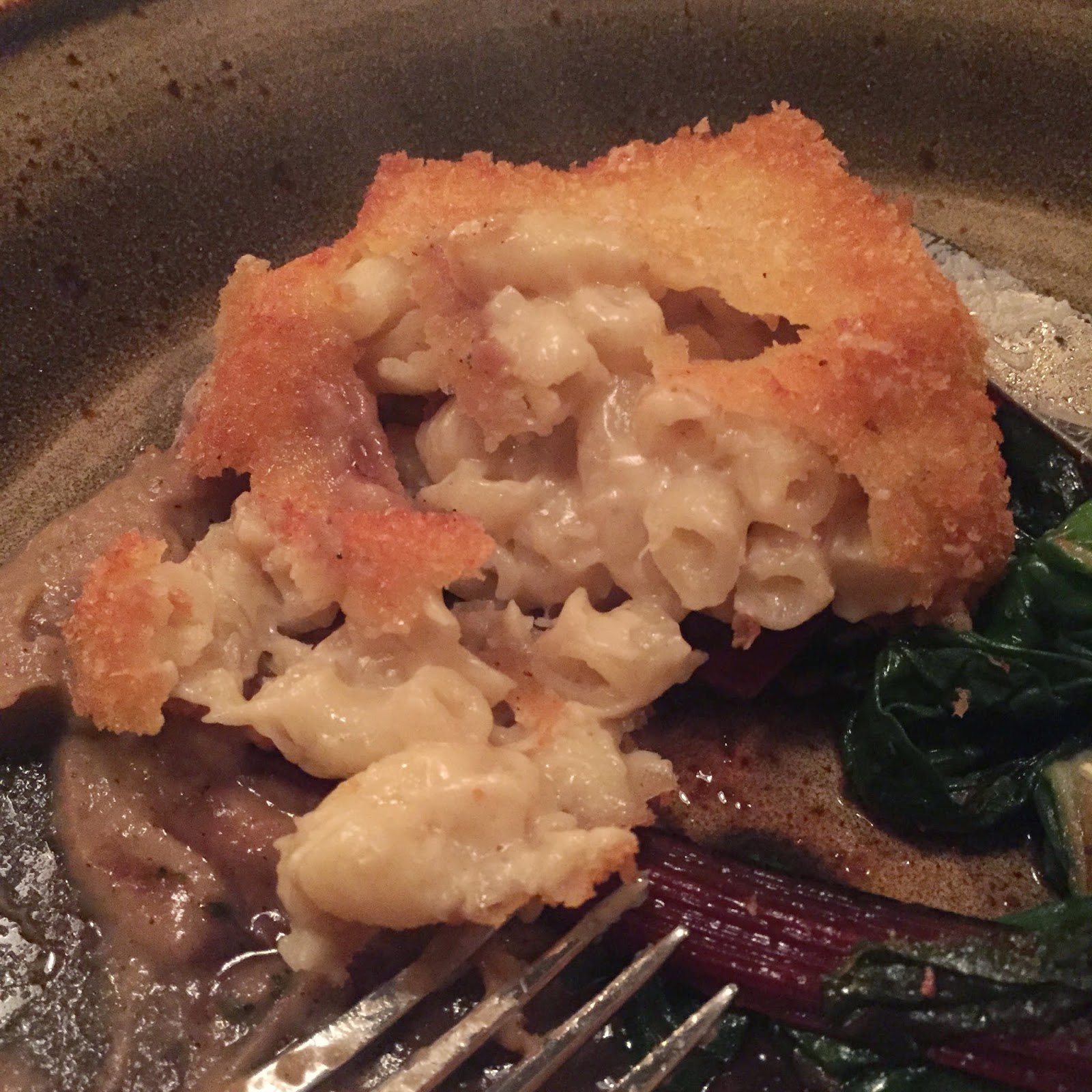 This was fine, but nothing like the party in my mouth I’d been anticipating. I was expecting to cut it in half to find stringy cheese oozing out, but in reality, it was more of a white sauce with cheesy undertones.  Absolutely loved the chard though, perfect temperature and seasoning. 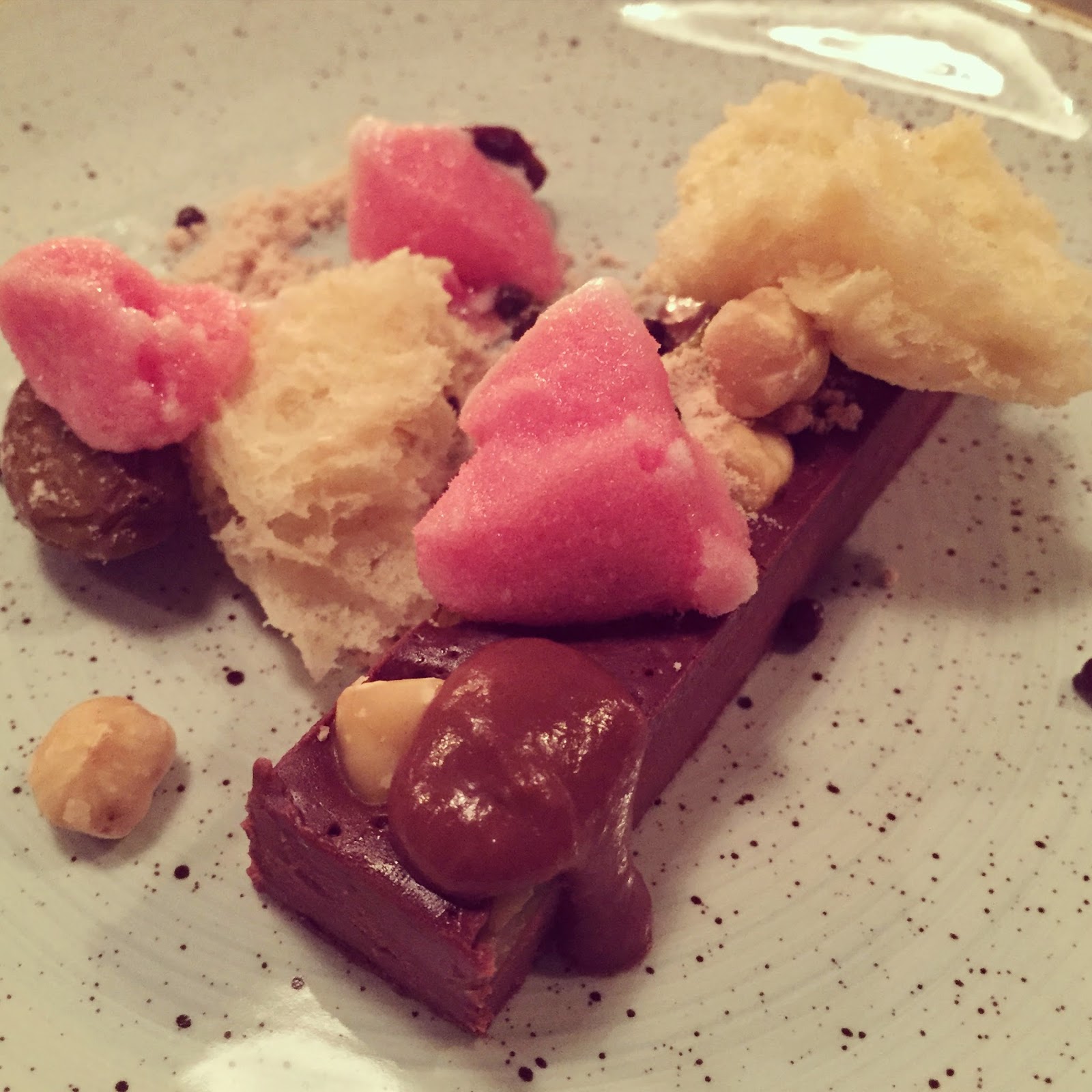 It was off to a winning start when the waiter described the chocolate ganache as ‘pliable’, I love the word pliable, I don’t know why, I just do. Overall I liked and felt ambivalent about this dish in equal measures. I enjoyed the PLIABLE ganache and the sorbet was totally gorgeous. The ’30 second sponge’ brought nothing to the party, and, the dehydrated grapes… I was pretty much over the whole dehydration thing by that point, but it did spark a hilarious debate about the difference between raisins, sultanas and currants.

As far as AOB goes, the space is lovely, the music was great and made the place feel buzzy but quite laid back too. The two members of staff who looked after us were keen as mustard and about a million times sweeter. They’re a great front of house team and they’ll get even better with time too. I forgot to take a photo of the loo, but trust me, they were clean, smelt good and really nicely decorated- top notch. All of us were in agreement that the plates were particularly lovely. Striking, unusual and about a million times better than screechy slates or boring boards.

So there you have it, my thoughts on one of the hottest new restaurants in town. What they’re offering is something a bit different at a great price. They’re fully booked for the first two weeks and I genuinely hope that it will continue for them as well, because I know for a fact they’re putting their hearts and souls into it and have done a tremendous job of creating a huge amount of hype around the place.  I’d to go back and eat in the bar area and again in the restaurant once it’s bedded in a bit.

Have you been to The Set? What did you think? Please do comment below or tweet me x