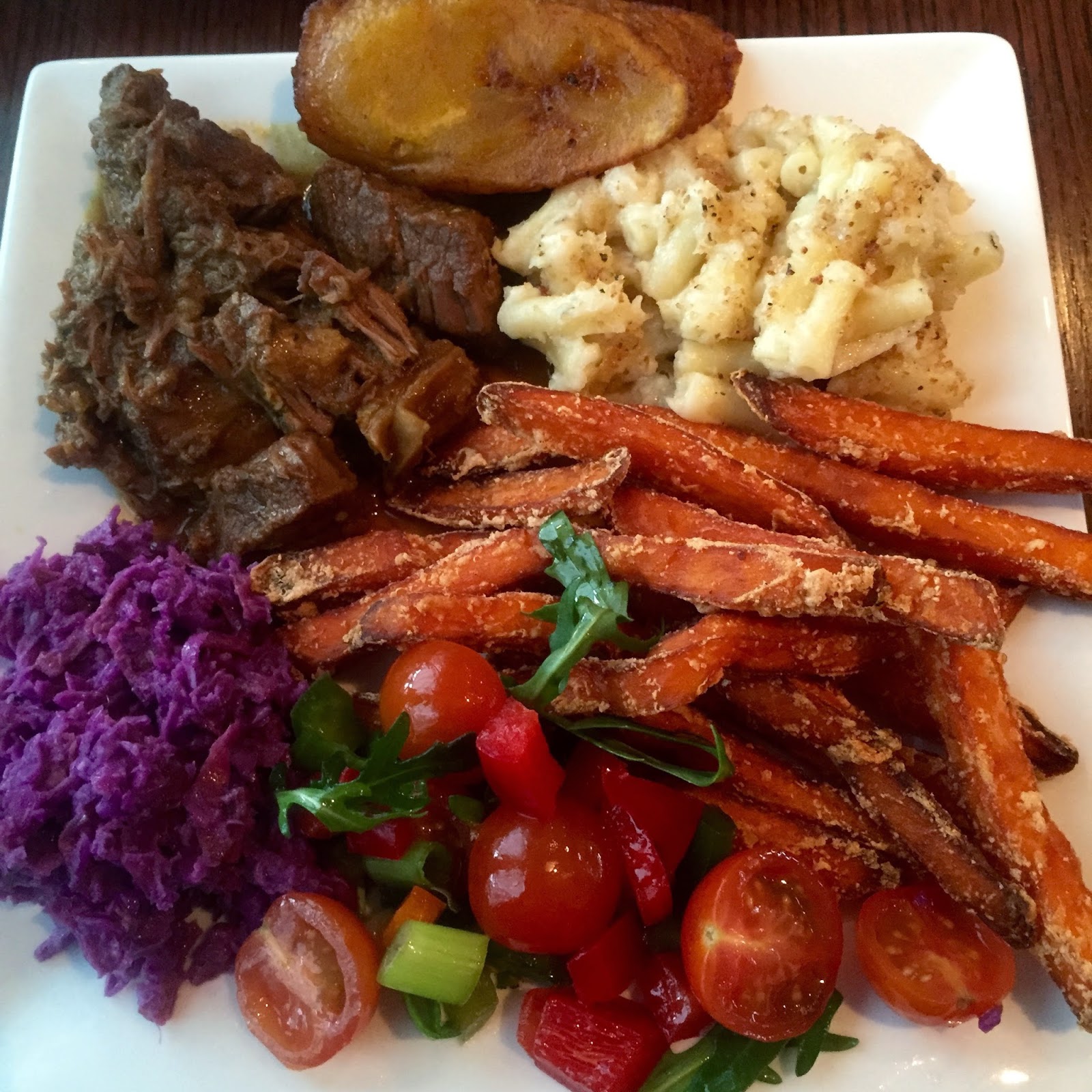 After my less than glowing review of the Caribbean Soul(ess) food at The Hampton*, I was keen to see if Brighton had anything better to offer. It turns out it doesn’t, so far, but (deep) Hove does, it really really does.

In the comments section of the aforementioned post someone kindly answering my plea for good Caribbean food in Brighton, and suggested Juke’s Bar & Kitchen in Hove. I took one look at the menu, texted one of my most jerk-chicken hungry friends and safaried out to Portland Road.

*After a quick browse on Twitter I see that the Hampton are now serving pizza, I think Fran and I will be giving that one a wide berth in any future rounds of our best and worst pizza in Brighton challenge though … 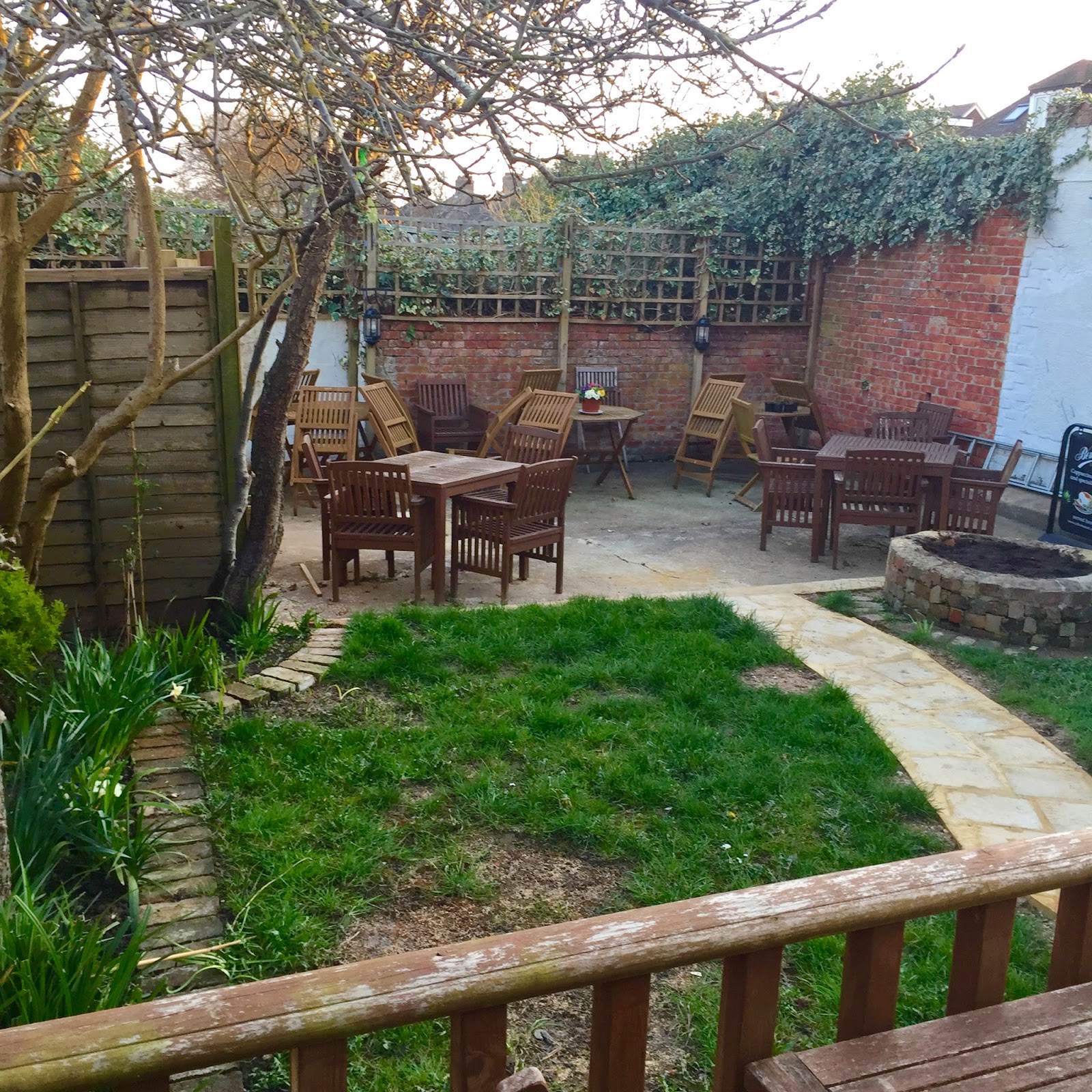 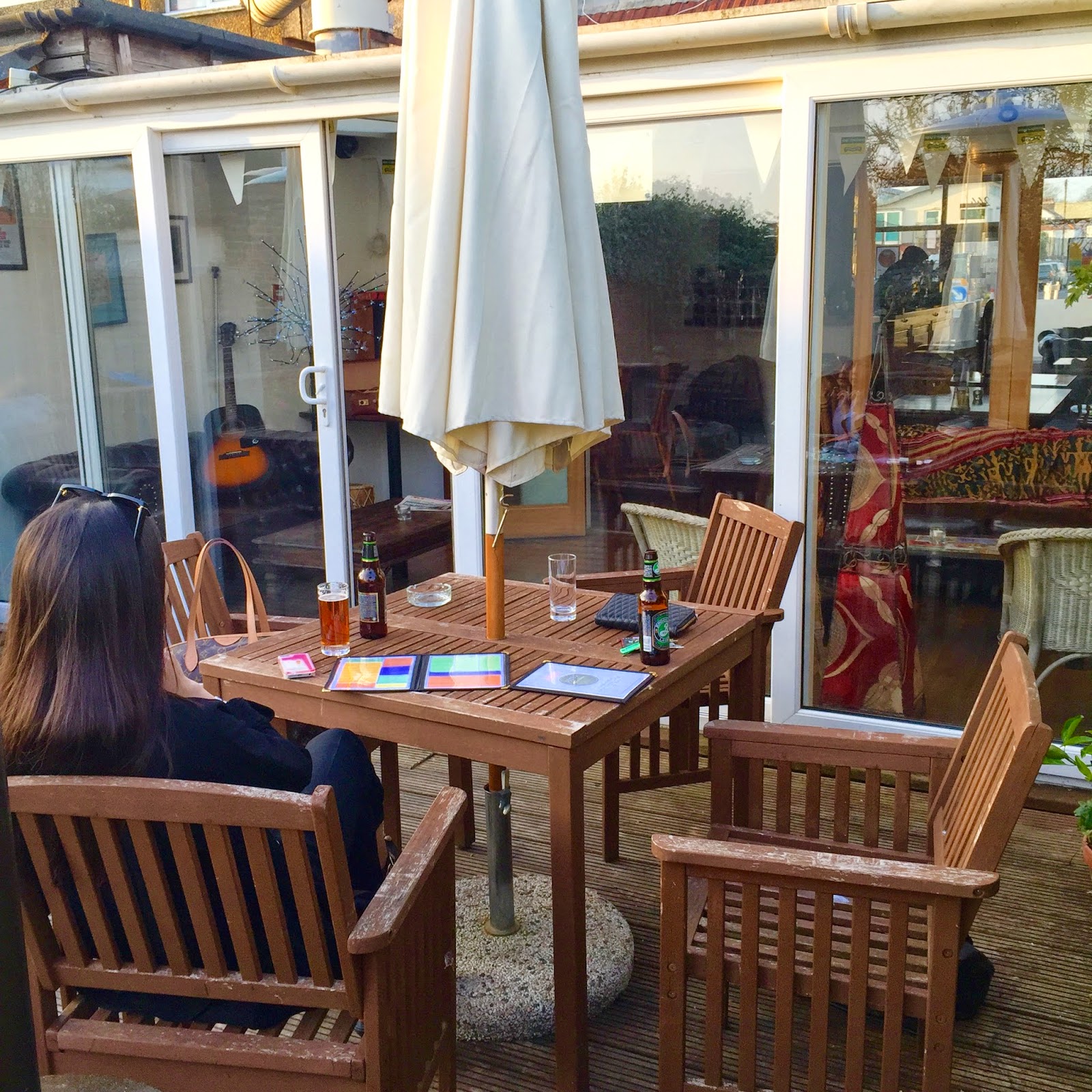 The venue seems to be an old house which has a shop front and the back garden was actually lovely in the late evening sun and is directly south facing so I should imagine it is a right little sun trap during the day (it’s open from 12pm onwards on. )

It’s not especially glamorous or stylish, but I think it’s homely and quite cute, especially with the whole family being involved in the running of the place. I approve. 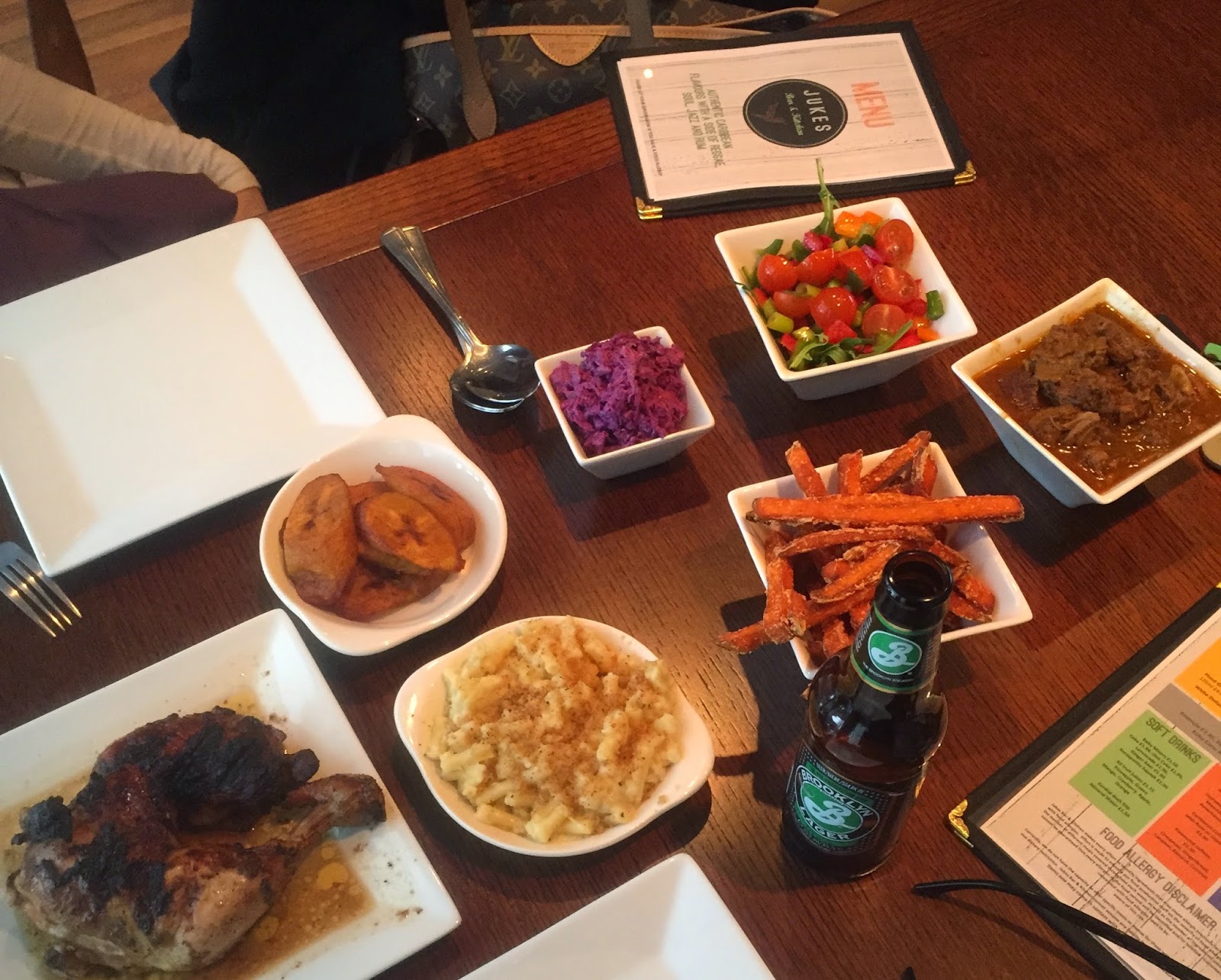 My phone has eaten my picture of the menu, that or I deleted it to make room (I’ve used up 64gb of iPhone already, WTF?!), either way, I don’t have it, so just know, it reads well. Annoyingly their website is out of action so I can’t link up to a menu on there… they need to sort that out, sharpish.

There are two types of ‘platter’ with a great selection of the rest of the menu items, we went for the ‘Reggae Platter’, which came with all of the above and we ordered an extra curry, as well as going large with our portion of mac & cheese too.

What a lovely and vibrant looking plate of food. We were warned on arrival that it may take a little while, we didn’t mind though as were happy chatting, and what did come out was certainly worth the wait. Head and shoulders above most of the Caribbean food I’ve eaten in Brighton recently, and since the demise of the original Momma Cherri’s in fact. 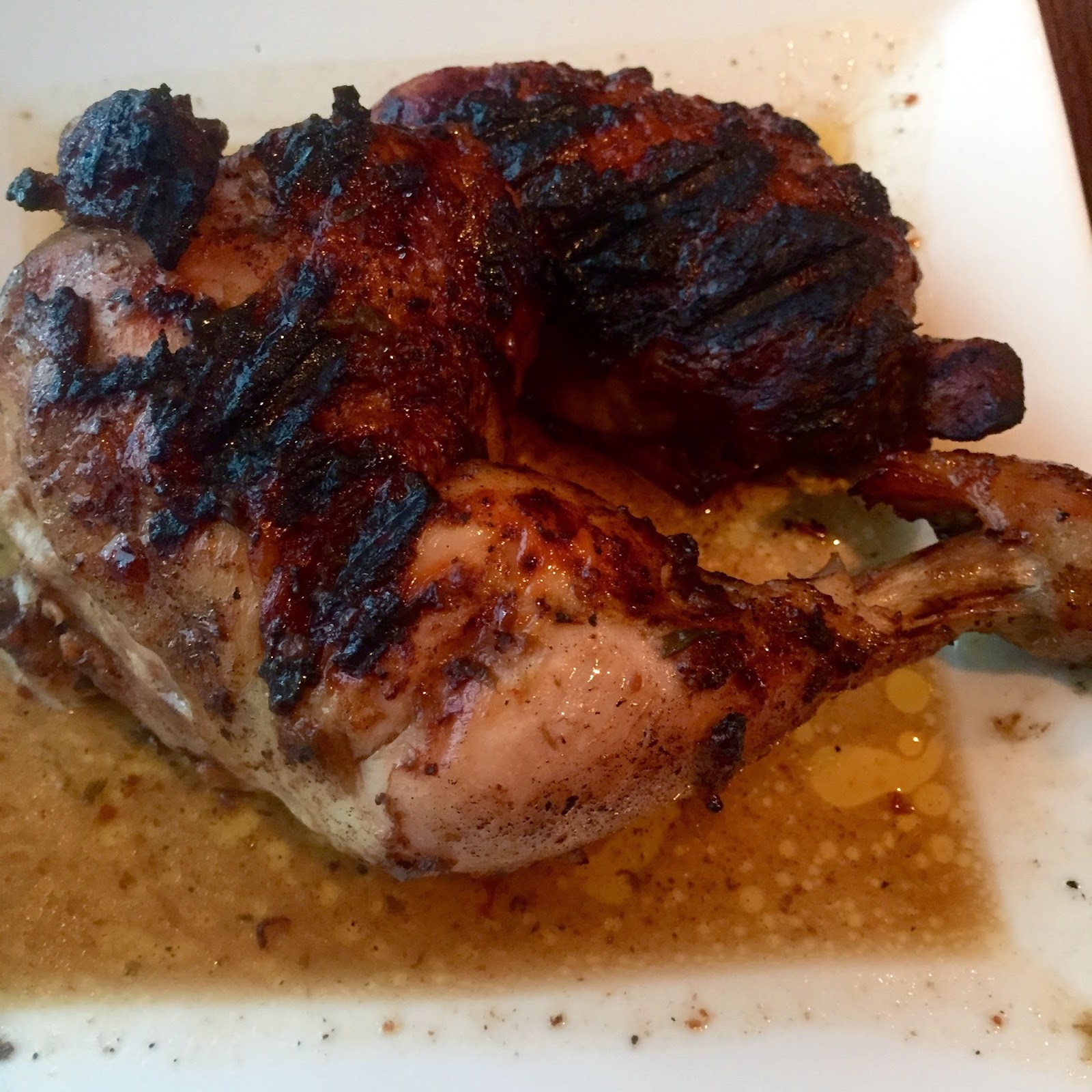 This was some goooood jerk chicken. It had literally just come out of the oven so was piping hot and super tender and juicy. It’d been rubbed with jerk spices/marinade pre cooking and although not overly spicy, had a really great flavour as well as texture. Lovely stuff. 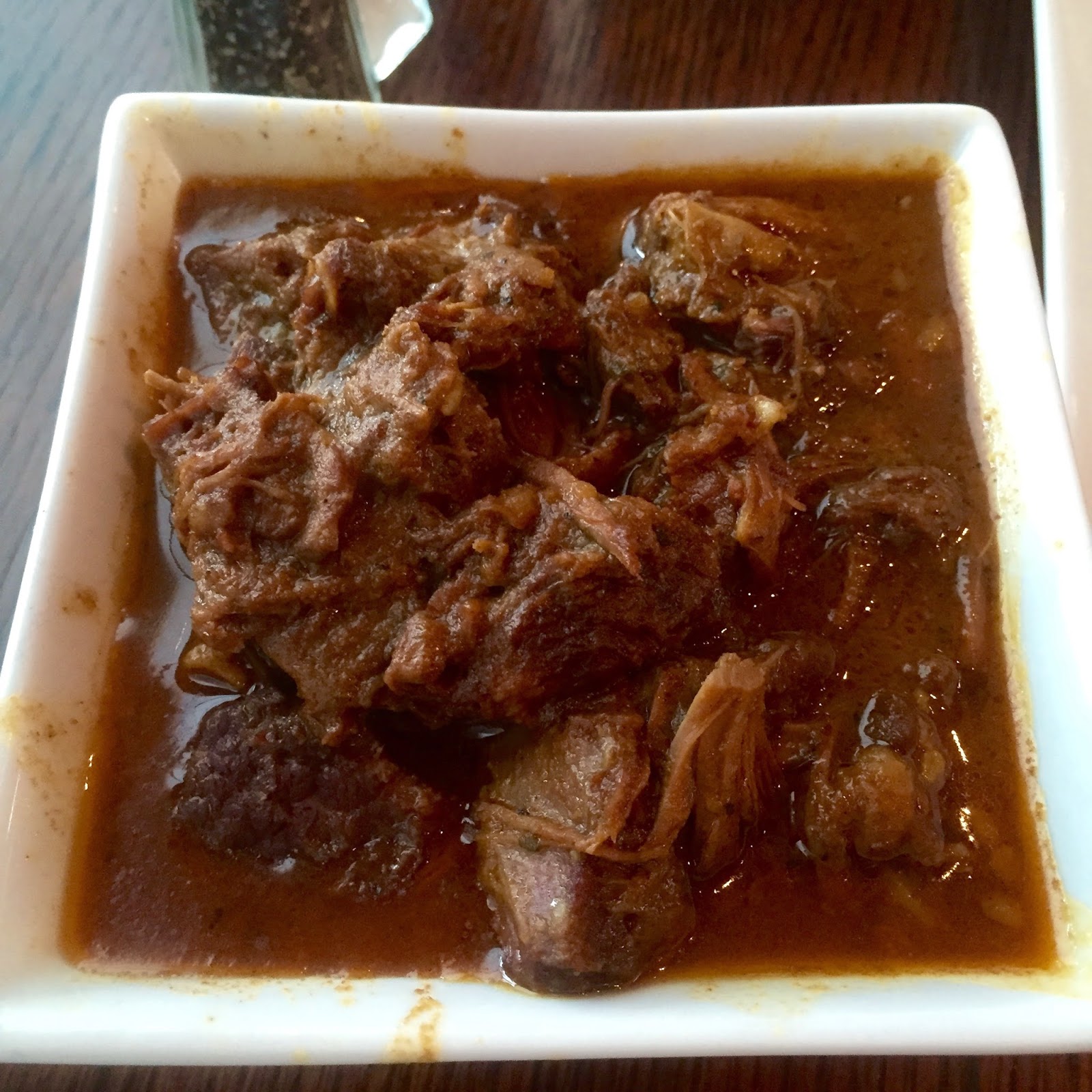 I absolutely loved this but it was Alice’s least favourite of all of the dishes. Slow cooked until it was spoonable, the mutton was unbelievably tender, which I also loved, but Alice didn’t. We were both in total agreement that the spicy gravy it came in was totally delicious though. 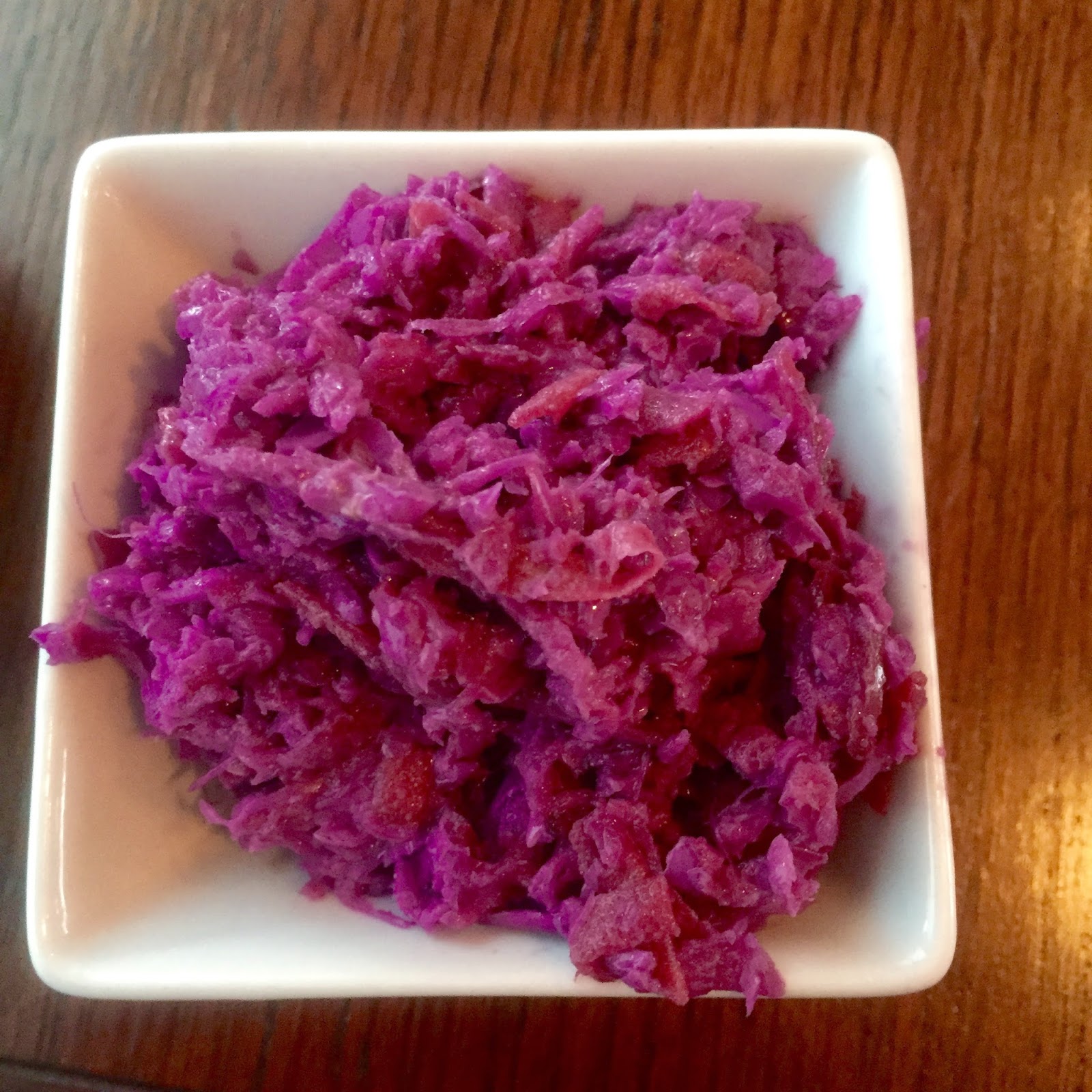 For me the only really disappointing part of the meal. As far as I could tell it was just some red cabbage, and perhaps a bit of onion, grated to a mush. I wouldn’t order again. 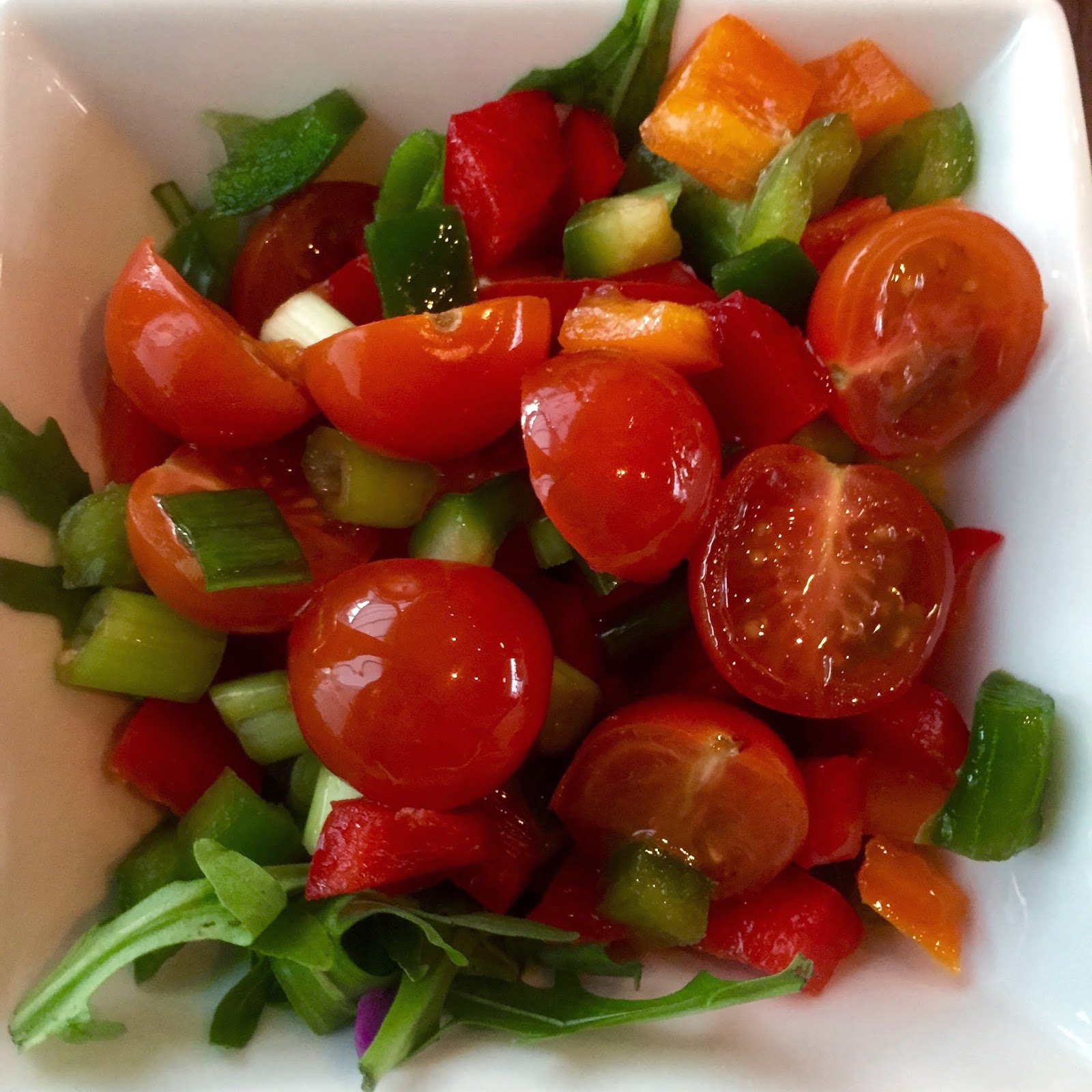 This was also part of the Reggae Platter and added light and crunchy element to the otherwise fairly stodgy (in a good way) selection of food. Again, this tasted as though it had been made fresh that day, not sitting about minging in a big vat in a walk in fridge out back. 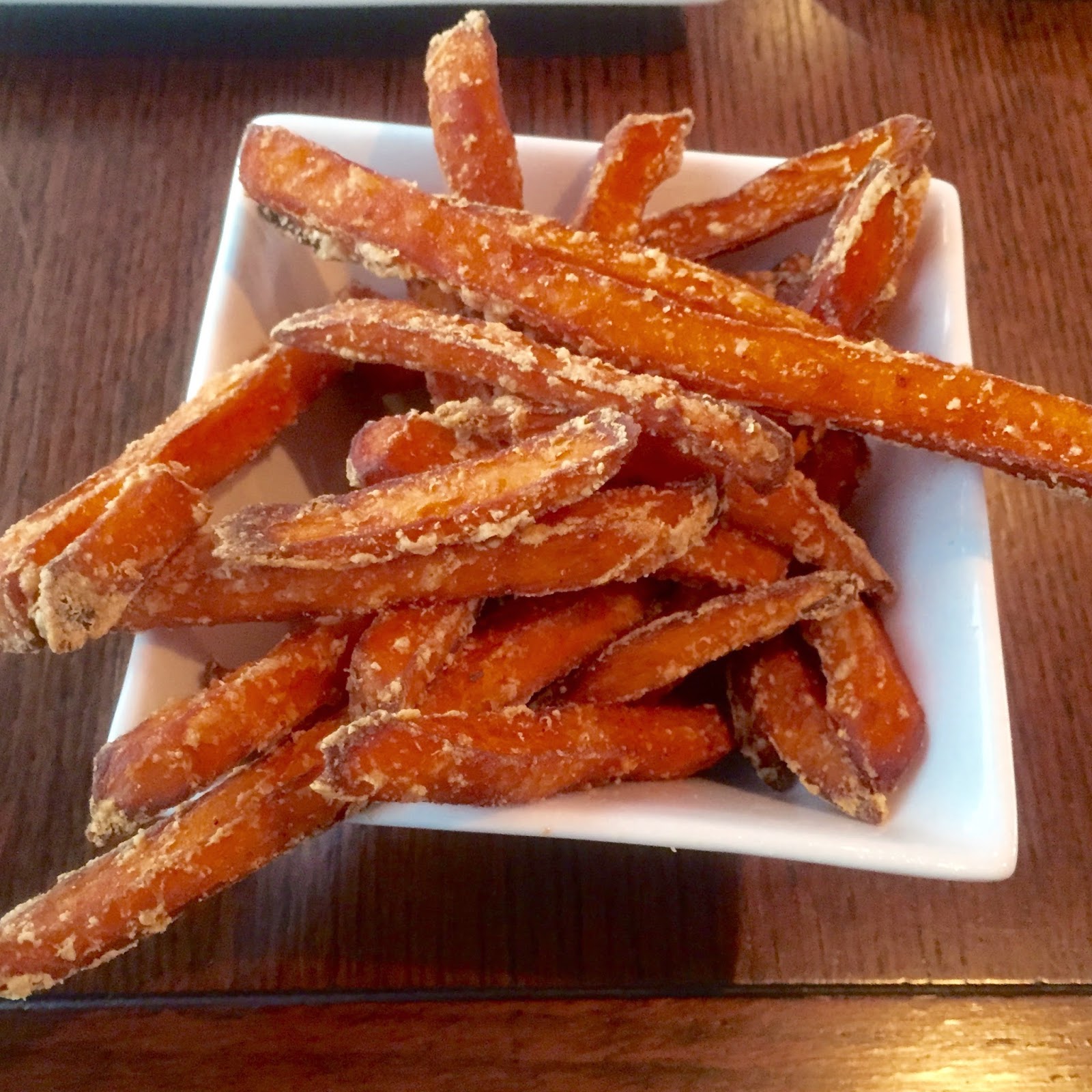 I think these had been coated in cornflour to make them crisp and it certainly did the job. Some of the nicest sweet potato fries I’ve had. I’d have liked some sort of spicy sauce to dip them in, but made do with the generous amounts of gravy that came with the mutton curry. 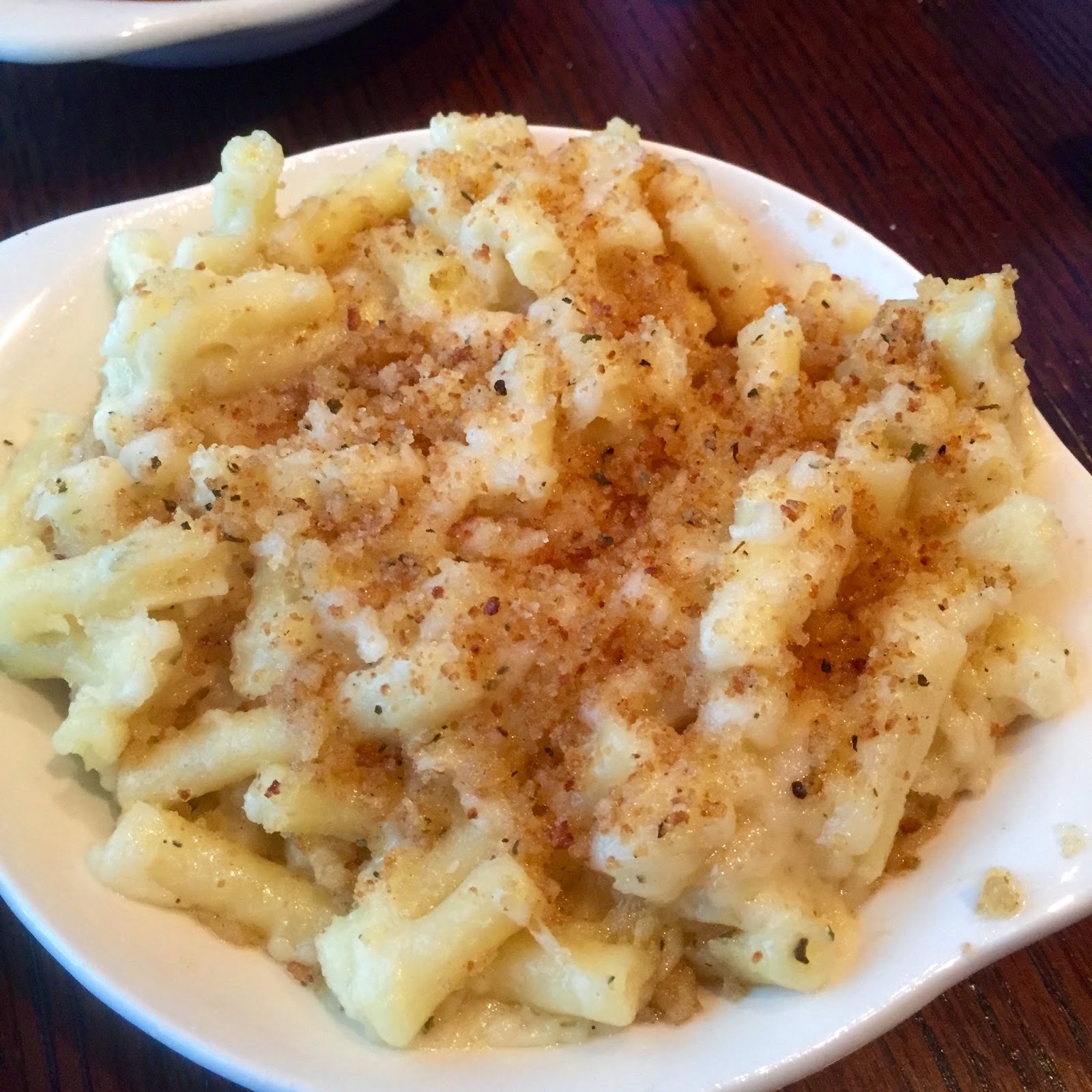 I’m sorry to keep mentioning my last ‘soul food’ meal, but I can only LOL when I think of the last mac ‘n’ cheese I was served up. Utterly revolting, and this was quite the reverse. Cheesey with just the right amount of stringiness and quite clearly made with love, rather than slopped out of a Happy Shopper tin and then nuked within an inch of its life. 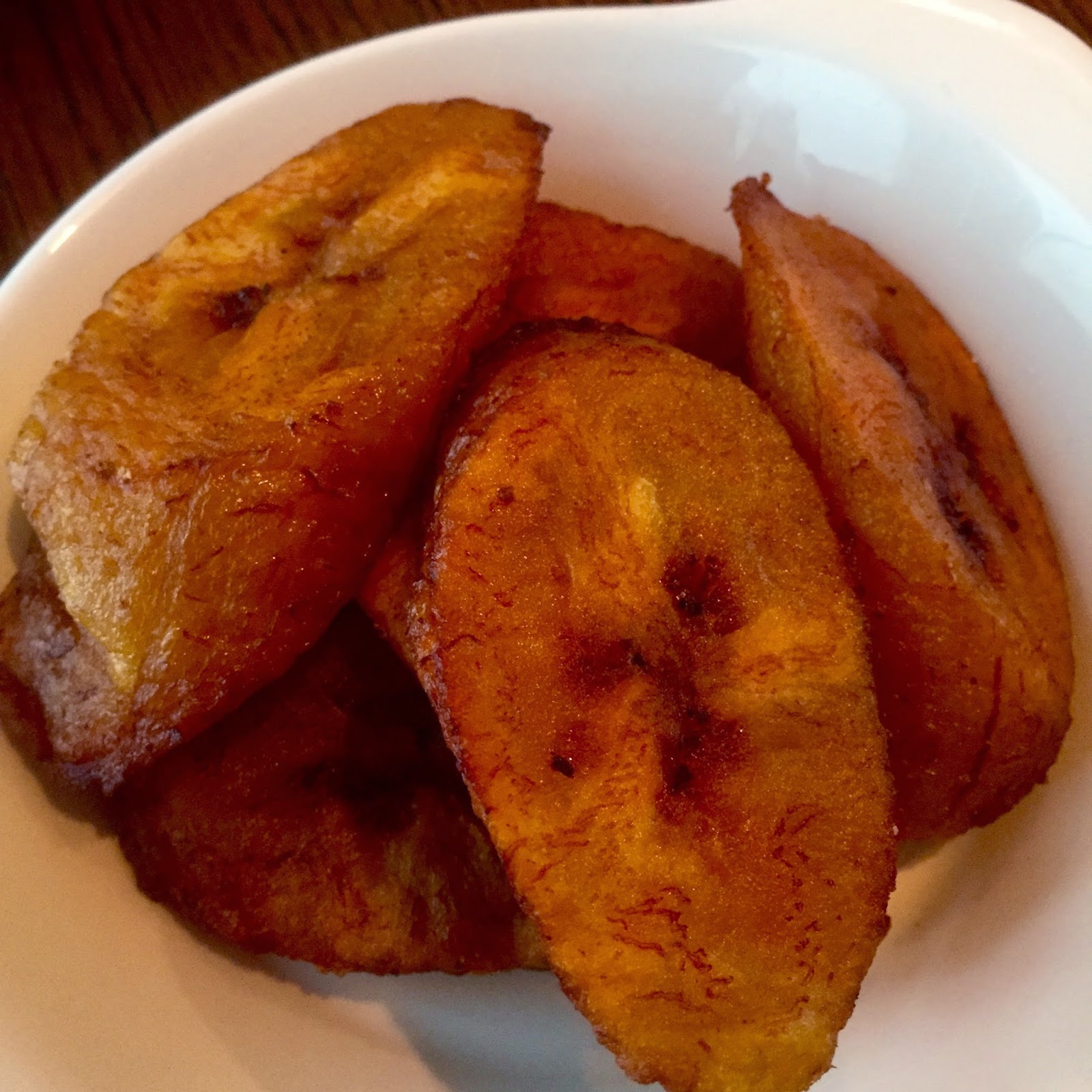 I was pleased to see plantain on the menu and it was perfectly ripe, with just the right amount of bite to it, it tasted like it’d been cooked fresh that evening too. 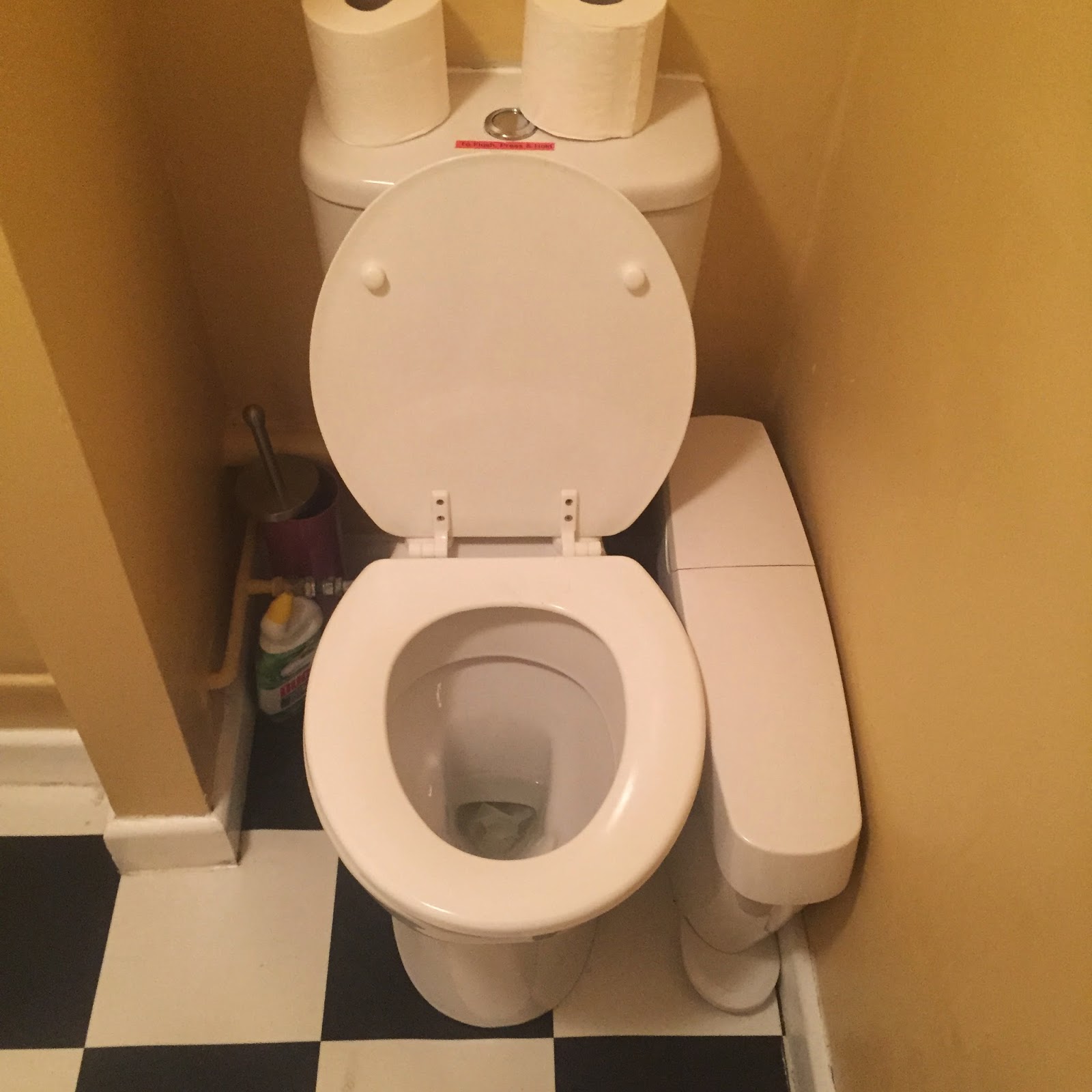 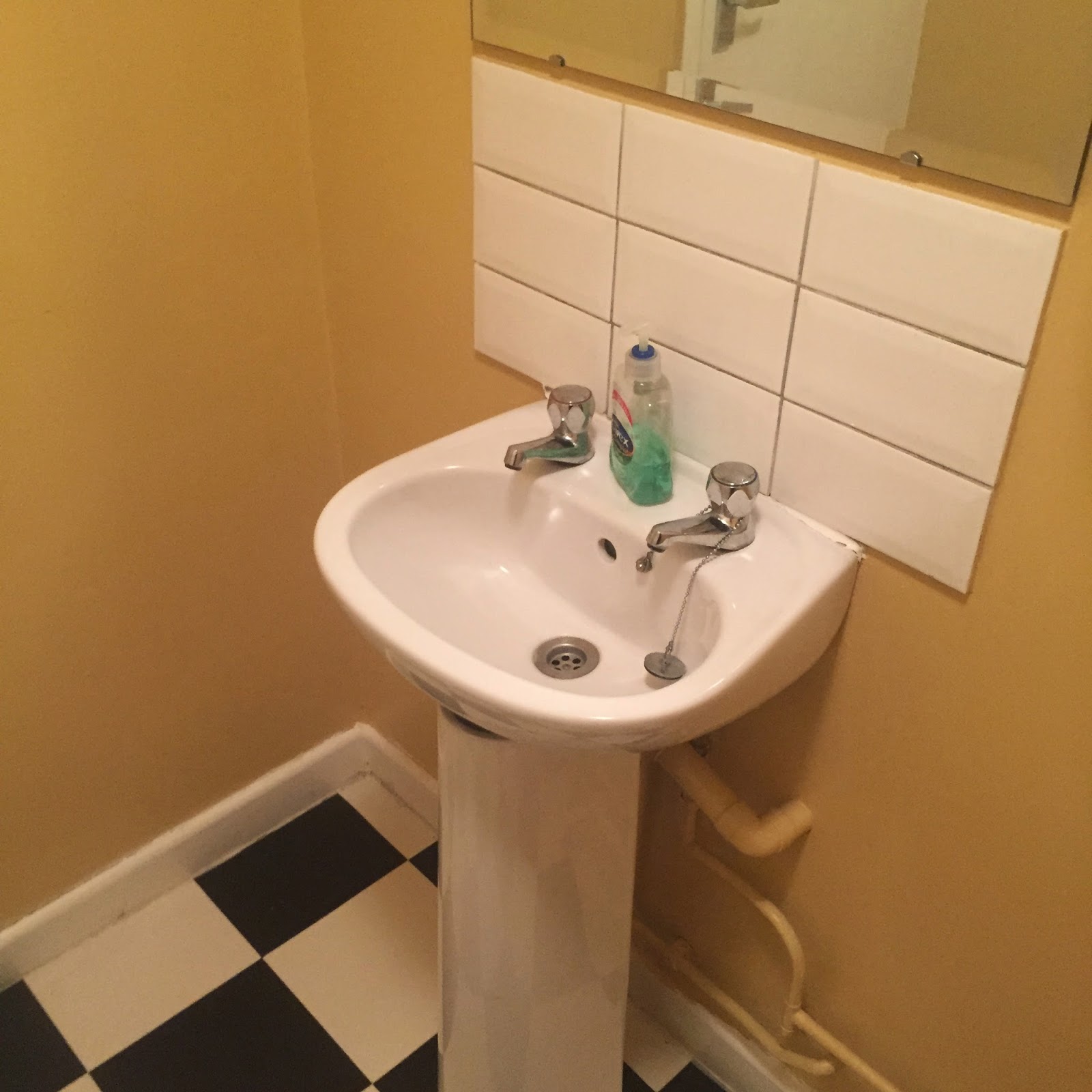 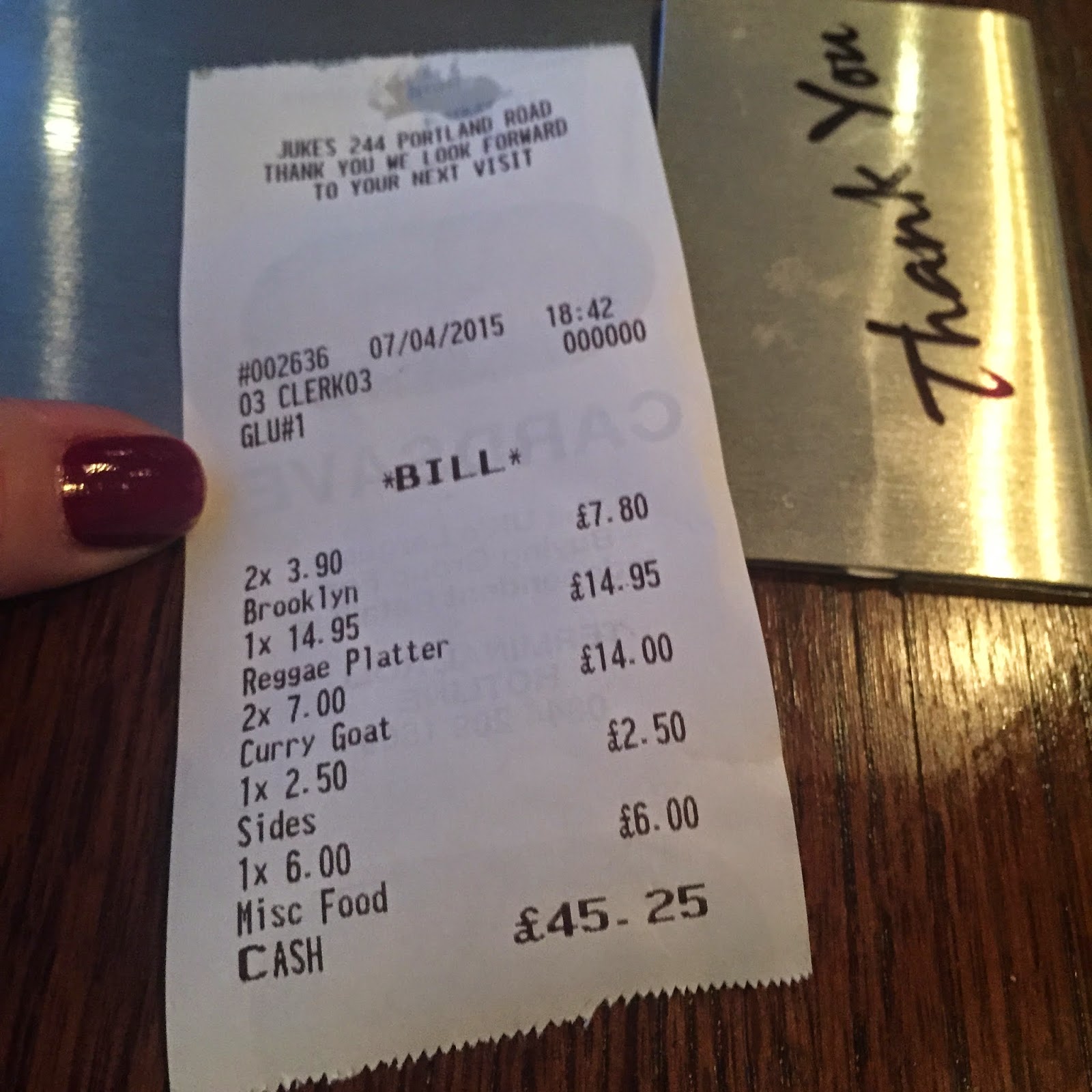 My friend ordered an extra Curry mutton (it says goat but it wasn’t) and a portion of Jerk chicken to take away,  so considering the quality and the portion sizes, this struck me as enormously good value.

I was really and truly impressed. The food was fresh, tasty and authentic. It’s a family run affair with Mum and Dad doing front of house and the son in the kitchen cooking their own recipes. I NEED to go back and try their roast as well, I can’t find any pictures of them online, but if it’s anything like as good as this was, I’ll be delighted to see an alternative to the (mainly) piss poor selection of roasts available in town.

One thing I will say is, it was SUPER quiet in there, granted we did go at 6pm on a random Tuesday , but these guys aren’t really shouting about what they’re doing, and their location and lack of delivery service/website doesn’t go in their favour either. Lots of people seem to have heard about it but no one seems to have been.. hopefully that will change though, as they deserve to be rammo!

Have you been to Jukes Kitchen? Or any other Caribbean style restaurants in Brighton? People keep telling me about the stand on Lewes Road, Back-a-yard? Please do comment below or tweet me x