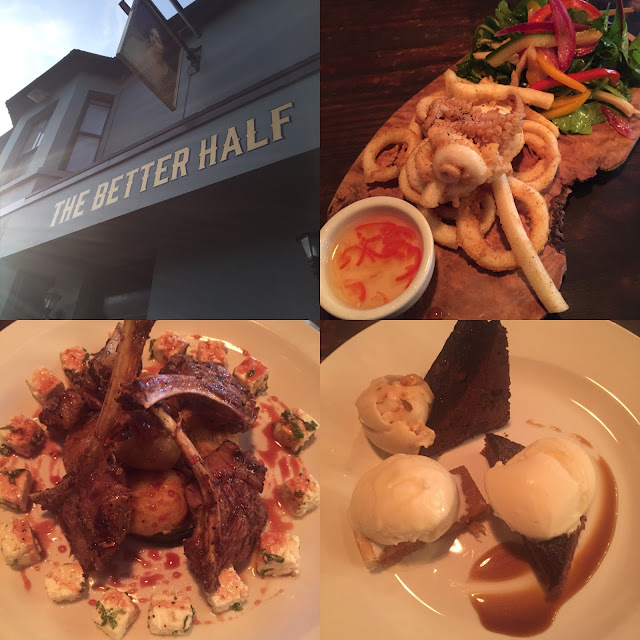 I have a very chequered relationship with pubs in Brighton and Hove. If they aren’t serving me rubbish roasts, they’re repulsing me with their loos or the overpowering smell of disinfectant (which sadly never makes it to the aforementioned loos) and nowhere seems to serve good old traditional pub food anymore…

Enter The Better Half.  tucked away down a side street in central Hove, it’s the latest of the city’s ‘old man boozers’ to get a radical and much needed facelift… with impressive results. 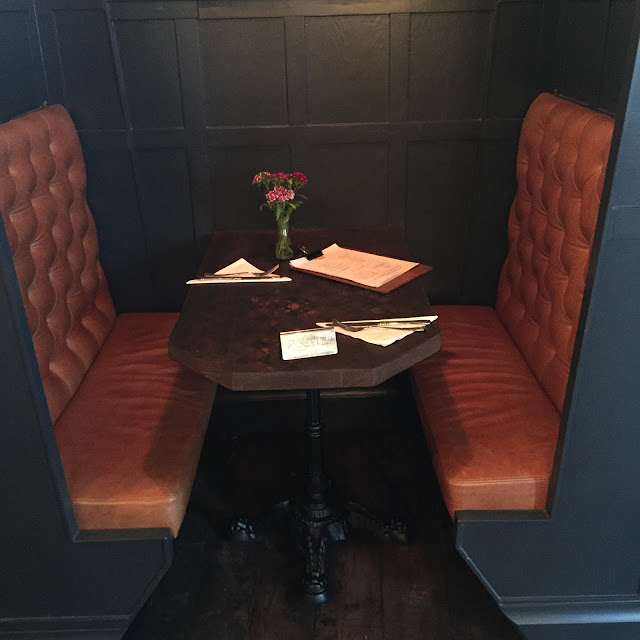 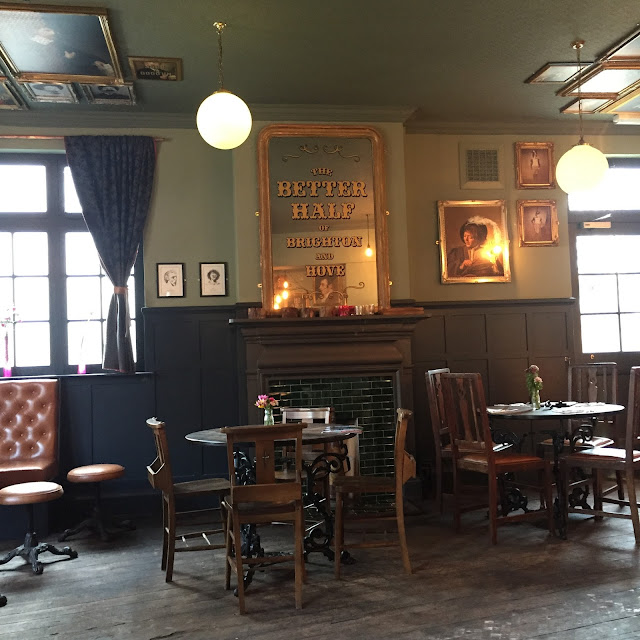 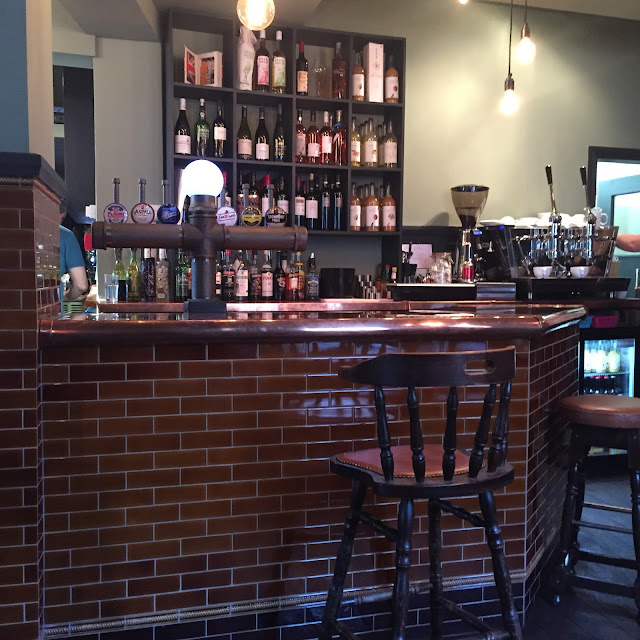 I absolutely love the interior and most of all, the polished brick bar, which is the central feature. Their website talks about creating a friendly and laid-back atmosphere in a venue which is accessible to all, and do you know what, I think they’ve nailed it

It was fairly quiet when we arrived at 6:30pm on a Tuesday evening, but over half full with an eclectic mix of people, from twenty-somethings having an after work pint to a large group of older ladies having a meal over in the corner- it’s somewhere I would happily take my Mum for a meal or my friends for a piss up. 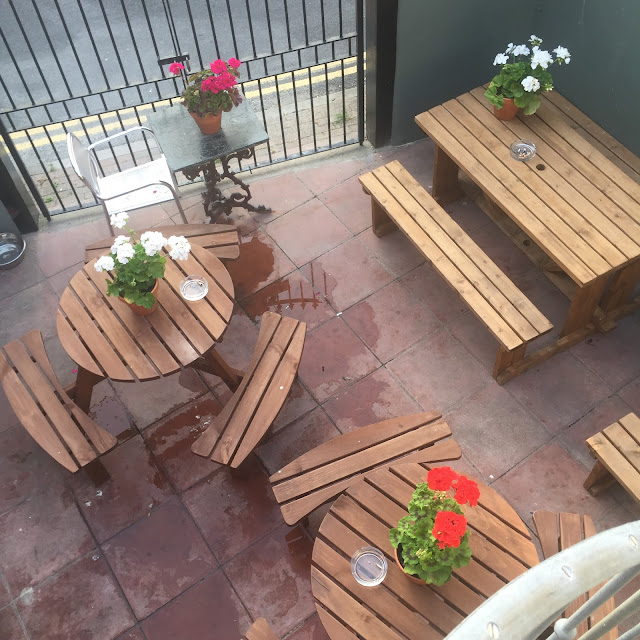 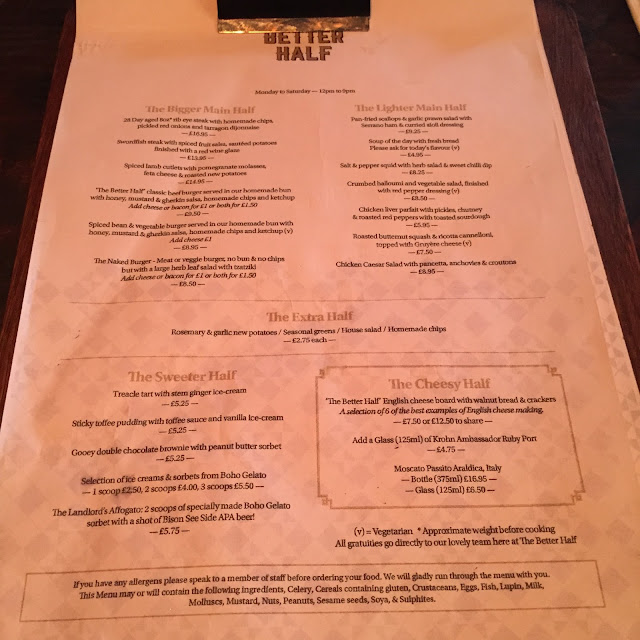 Although it doesn’t entirely satisfy my yearning for tradtional ‘pub grub’, as menus go, it’s still a bit of a looker! We treated ‘The Lighter Half’ side of the menu as if they were starters, but they really are small(er) sized mains so probably sufficient as a main course for someone on a diet or those with a smaller appetite. 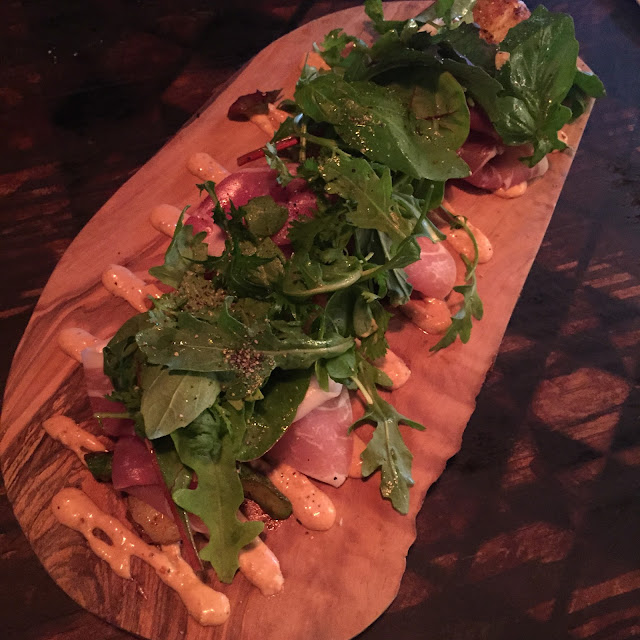 Both of us were staggered at how generous the portion size of this was. I took some really terrible photos of the scallops close up, which I won’t inflict on you, but take it from me, they were big boys which had been cooked until perfectly seared but bouncy within. The only thing I wasn’t mad about on this dish was the curry in the aioli, I just felt like it didn’t need it, Jonny liked it though, so all down to personal preference I guess. Oh, and the board it came served on, but everyone knows I hate this, so moving swiftly on… 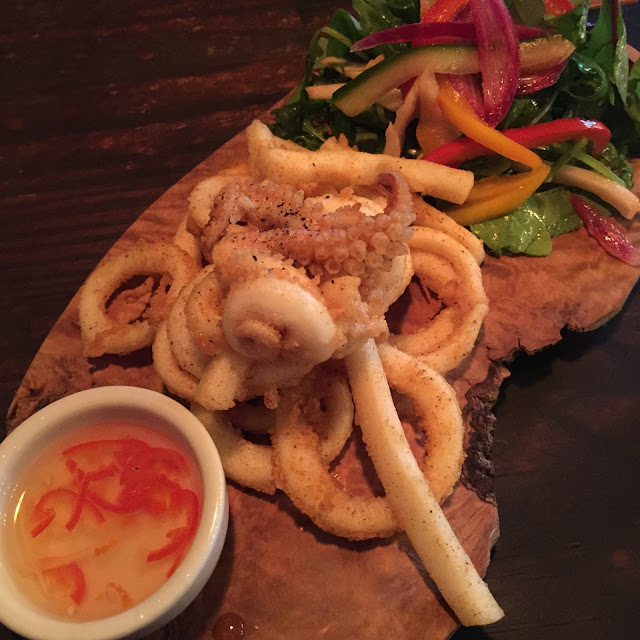 I’ve had such mixed experience of eating squid recently. I was served something really average at Lucky Beach a few weeks ago (review to follow) but had two portions of the the most incredible calamari at Papa Pitta. The Better Half offering fell somewhere at the top end of in between.

I loved the fact that all of the squid was used, the tentacles were crispy from the frier and delicious with the sweet chilli dip. The other pieces could have done with a little more crispy coating and seasoning but were still nice. I was thrilled to discover that the pickled red onions I’d been coveting from the steak dish make an appearance on the accompanying herb salad, bloody loved them. 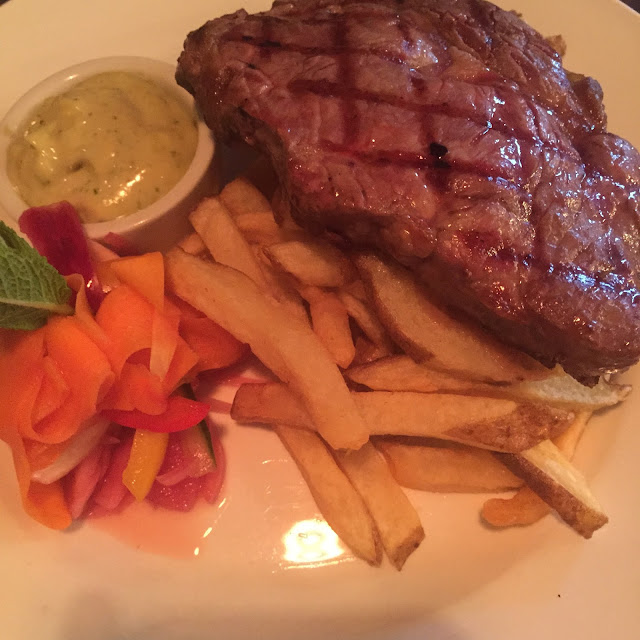 This wasn’t mine, but I tried some for research purposes- obvs. I enjoyed it, but it didn’t rock my world,  absolutely adored the tarragon dijonaise though, and will definitely be giving it a whirl at home too. Jonny’s verdict was ‘lovely, but if you want criticism- it was just a nicely cooked steak and chips, but I could’ve been eating it anywhere’. 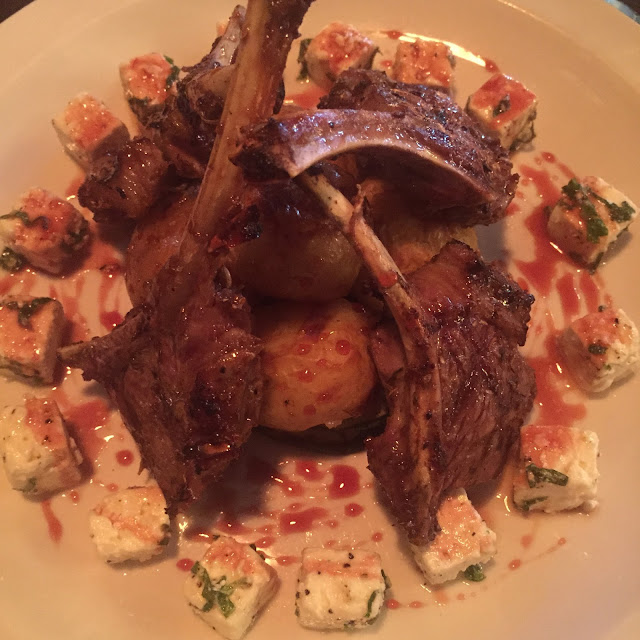 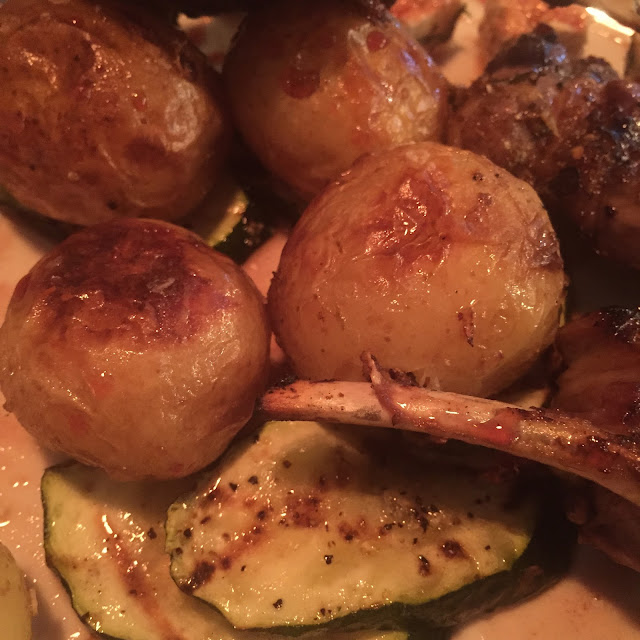 After our starters I was half expecting the main course to come out on boards too, so was very glad when they didn’t. Accurately cooked and blushing just the right amount within, the meat was very good indeed, and I really enjoyed the pomegranate molasses with was more of a fruity jus rather than the gacky treacle-like stuff I’ve been served in other places. Underneath was a generous portion of well seasoned roasted new potatoes and courgettes. No complaints from me on this one, and I would definitely order again. 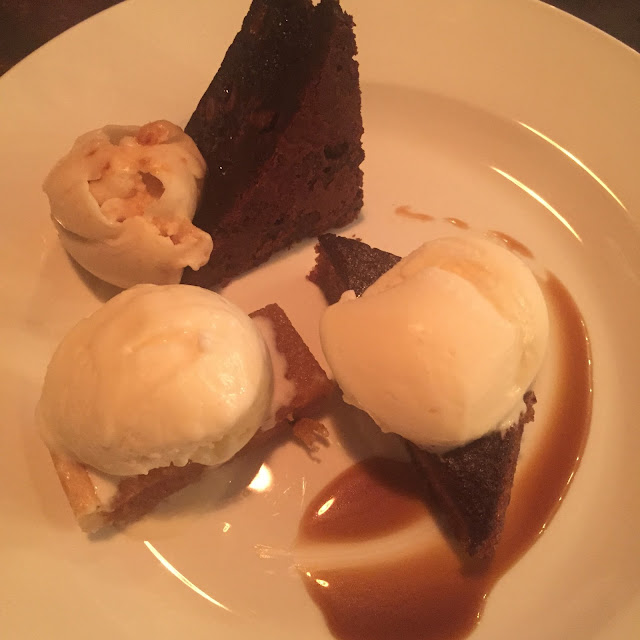 For me dessert was the stand-out course.  I immediately honed in on the sticky toffee pudding as did Jonny, but Simon was adamant that we must try the brownie- and said he would arrange for an assiette of desserts to be brought out. I thought he meant to share, but it turned out to be one of each, each!

The attention to detail in them all was fantastic, but for me the highlights were the peanut butter sorbet, the gooey, tar-like brownie that came with it and the treacle tart with a subtle hint of lemon running through. If you go, make a point of saving room for dessert! 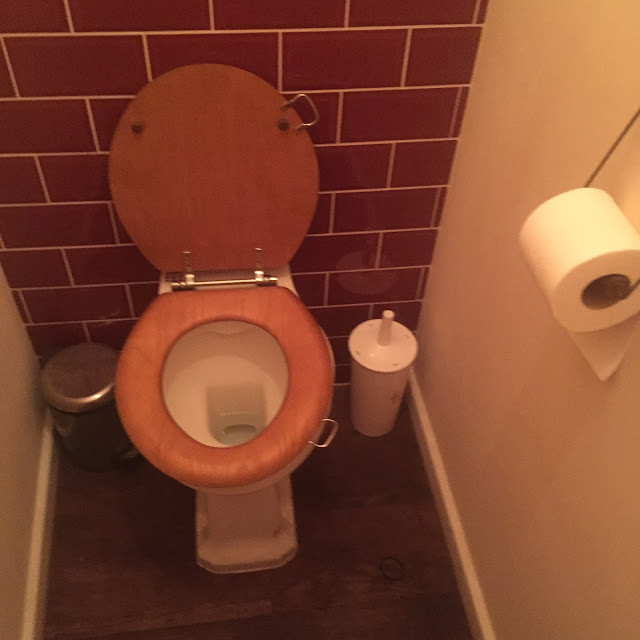 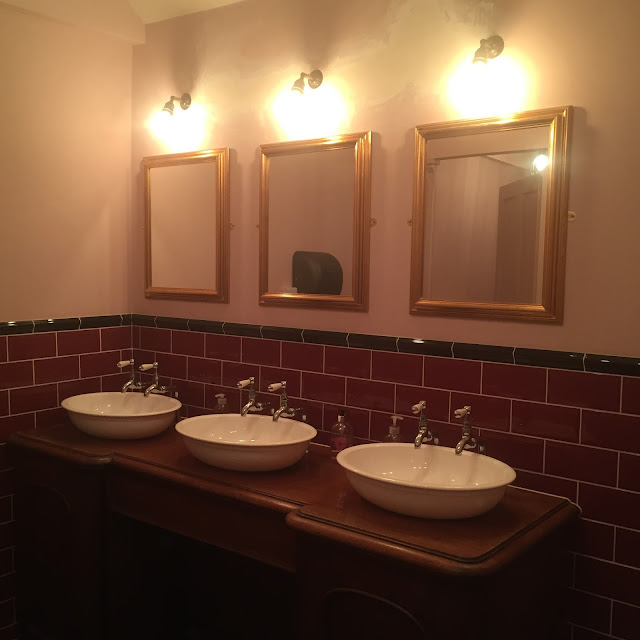 Overall I really, really liked the Better Half. The setting is lovely, the food is good and if I was in need of a venue on that side of the border, then it would definitely be up there on my list. I’m hearing lots of positive reports of their roast as well so I’ll definitely be back to give one of those a go too.

Have you been to The Better Half? Any recommendations for decent pub grub in Brighton or Hove? Please do comment below or hit me up on Facebook or Twitter, links below.

My meal was free of charge, as the management at The Better Half invited me in to review. Opinions are still my own.