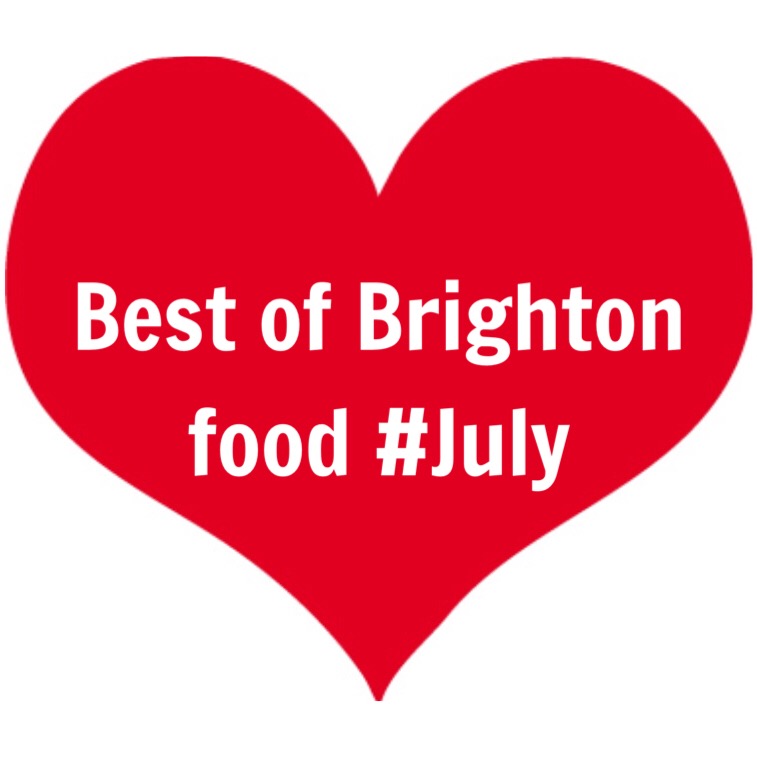 When I was browsing my photos for the best food I’d eaten out in Brighton in July, I noticed a bit of a theme… indulgence, and I make no apology for that. There were a few others who stood out as well, but as I talked about them in my ‘Best and worst takeways in Brighton’ post, I’ll just link that here rather than regurgitating the same content.

I’ve had a few not so good experiences too, some really lazy calamari at Lucky Beach, lame tapas at a Tapas Y Más pop-up a few weeks ago and some horrendous customer service at Dos Sombreros where we left before even eating. Oh well, you win some you lose some.

I’ve got big plans for August in terms of eating, there’s West Dean Chilli fiesta as well as trying out the Breakfast Club’s new menu and Fatto Mano pizza on London Road, so another month of gluttony on the cards for me again! It’s a tough job, but… 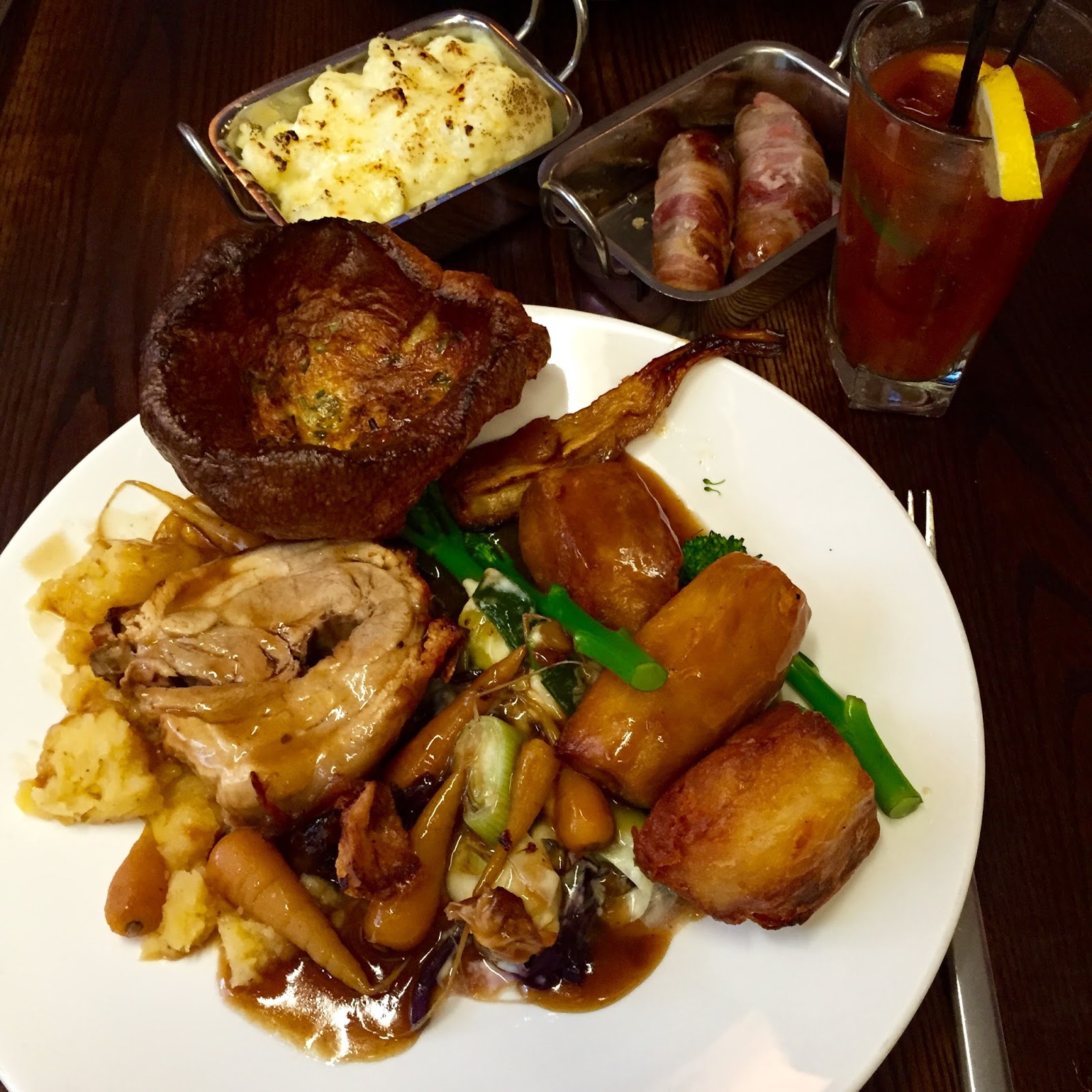 One of, if not the most recommended roasts ever, there’s a lot of love out there for Hove Place, and I finally made it down there a couple of weeks ago. As it’s going to be a while until my next Brighton roast post I thought I’d give you a mini review now. Overall I was really impressed. One of the roasties was textbook and the other two were lame, but the herbed yorkie and comprehensive selection of of veg were all cooked perfectly and generous in size. Bonus points gained for the root mash and cheese element too. At £14 for a roast and each side £2.50 a pop, it is pricy per head, the most expensive across all 60+ places I’ve tried… was it worth, it? I’m not sure there are many roasts that are. Is it in the top 5 of my 60? I’d need to go back to be sure, but I think so, yes. Read my last Brighton roast round-up here. 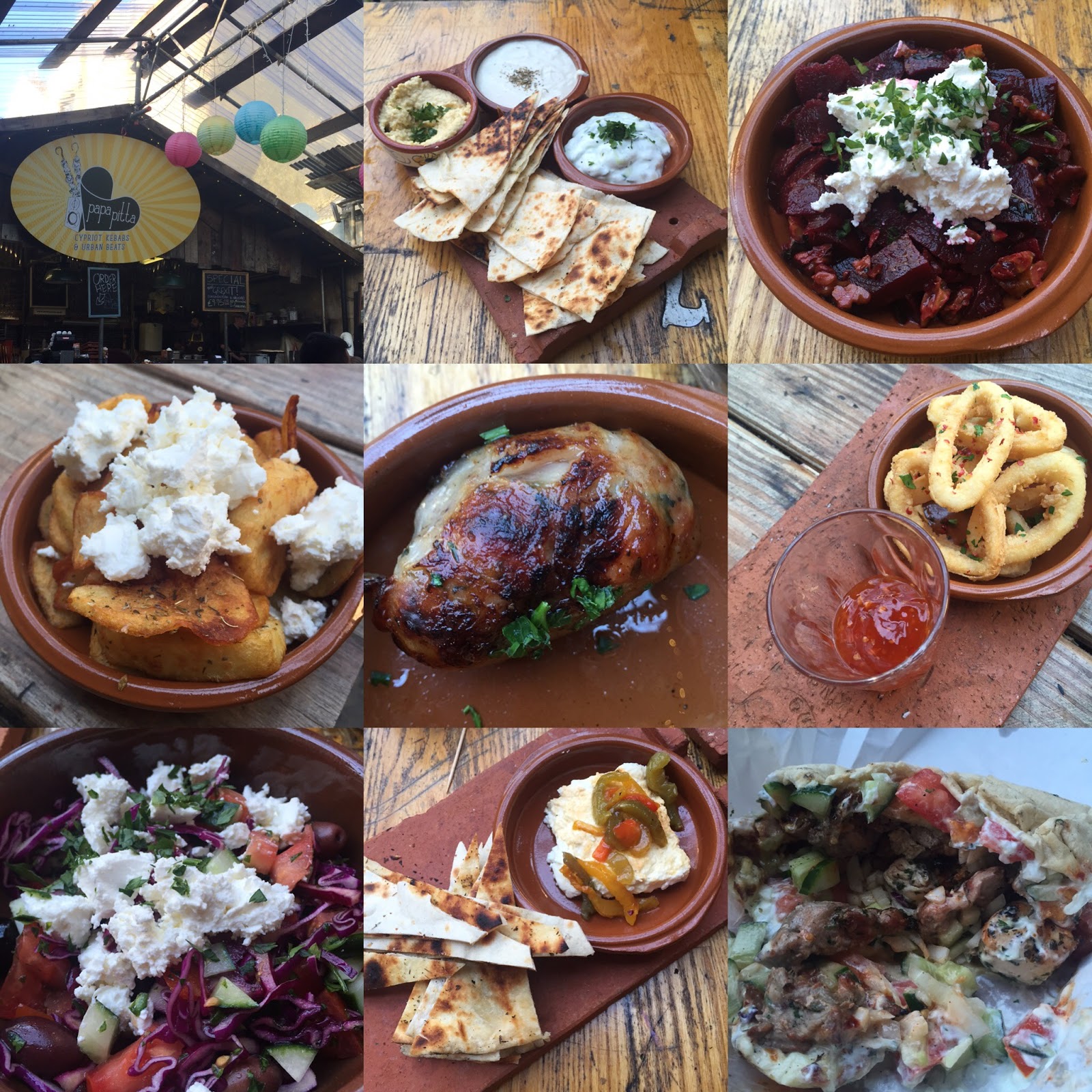 If you follow me on Twitter then you will be more than aware of my adoration for the (former) little slice of Cyprus in North Laine. You will also know that they had their license to trade in Diploc’s Yard cruelly snatched away by our brilliant (LOLs) Council after receiving complaints from some drip of a neighbour. Consequently they ceased trading at the end of last month and I had to go back to relive the delights of my previous visit, again. I’m thrilled to say that it was just as good and the person I was with was blown away too. That sausage though…. I’ve heard on the grapevine (Twitter) that Papa Pitta may have found a new and permanent premises, please god let it be true! 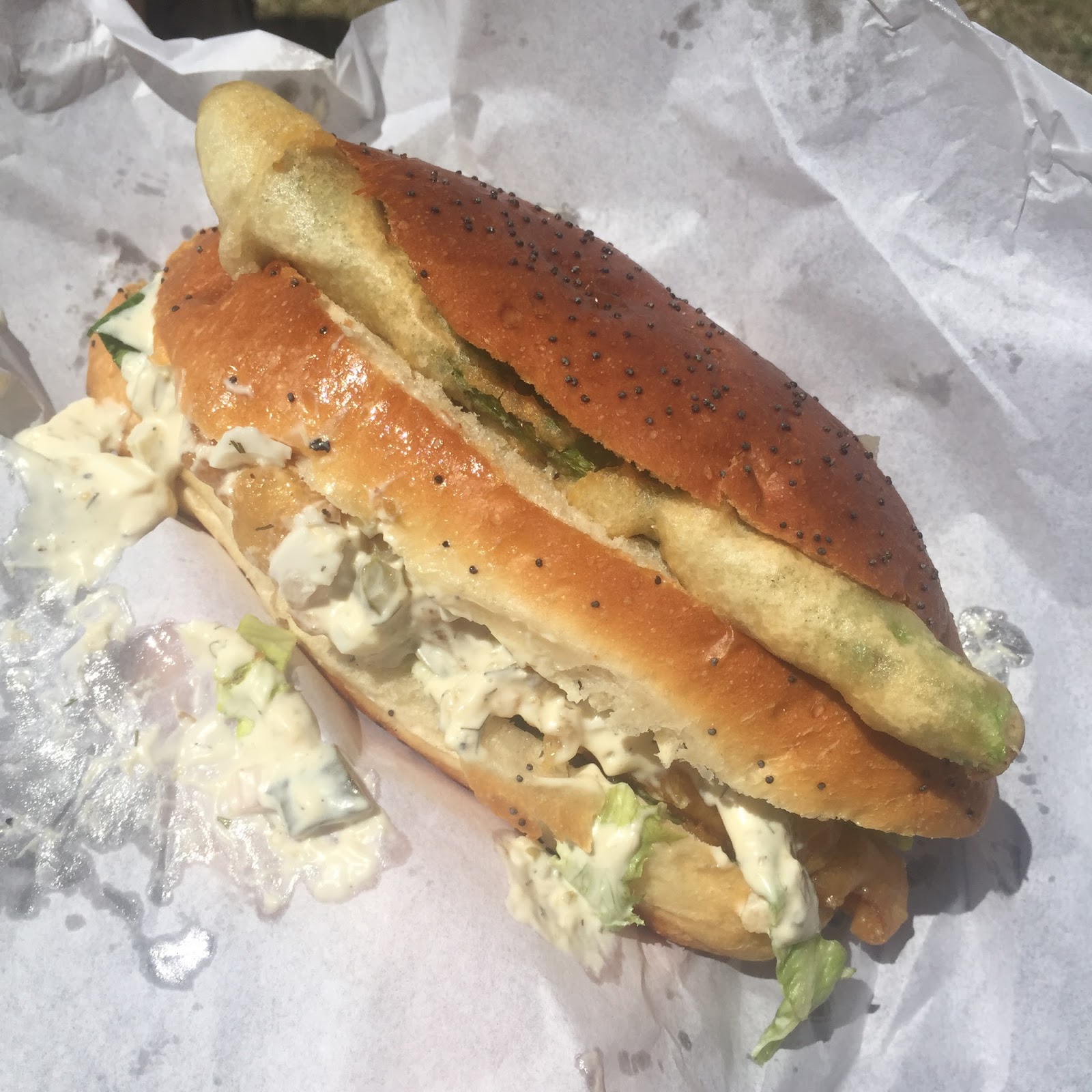 It’s not really a surprise to see a Street Diner trader appearing on the line up of one of my favourites post, but Olly’s fish shack is one I’ve only tried a couple of times, so when I saw one of these posted on his Twitter, I knew a revisit was on the cards. Word had obviously got around and there was a queue down the path. Olly had put one aside so I annoyingly skipped to the front of the queue to collect, and devour.

Let me talk you through what you are seeing above (his photo was loads better than mine), that is a sub roll sliced into to make it a double decker the top half of which was stuffed with a tempura asparagus spear and underneath was battered white fish, crispy bacon and hard boiled egg tartare. It was as outrageous as it sounds, and looks. 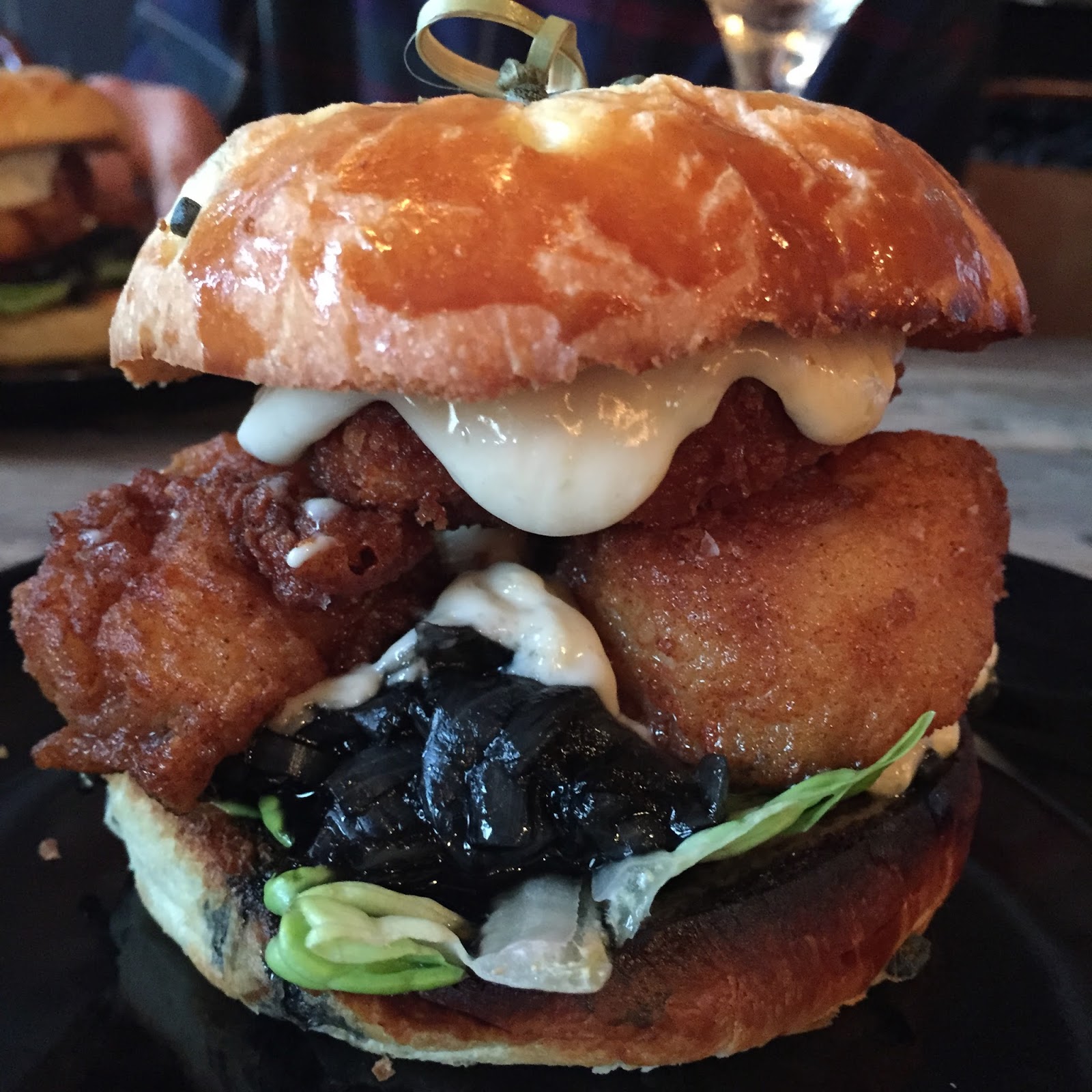 I’ve fawned all over the meal I won at Set of Scales, on every internet platform I have. It was mind bogglingly good, and this beast of a fish burger (cod cheeks with crispy ham hock and cola onions) was only one element of it. Head on over to my full review of the meal and then get yo’ ass to Regency Square to devour one. And a mars bar and marshmallow brownie…. 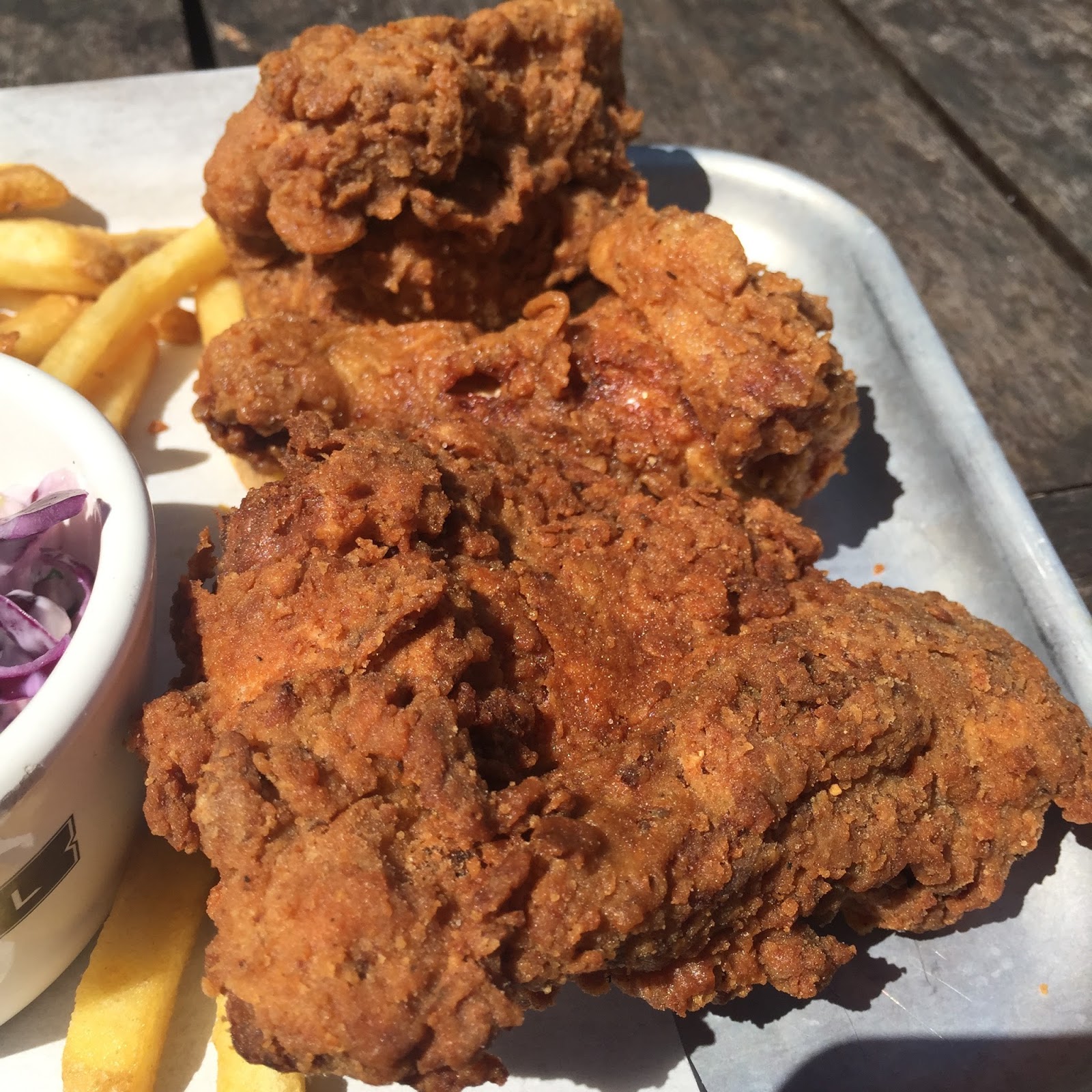 Someone, I forget who, told me that The Park View served the most amazing fried chicken. I filed it under ‘random’ but thought about it every time I was stuck in traffic by the pub on my way home from work. I went on the last Friday of the month with my colleagues and we were all blown away by the size and quality of the platters of food we were served. It was incredible, seriously some of the best I’ve tried. I went back two weeks later to check it wasn’t a fluke…. and it wasn’t as good, it was good, but it wasn’t anything like as good as the above. On the same visit we played the pub quiz… and only bloody won! We got a voucher for £50 to spend at the pub, so we are going back next week to defend our title and I’ll go for a third time lucky on the chicken and report back. 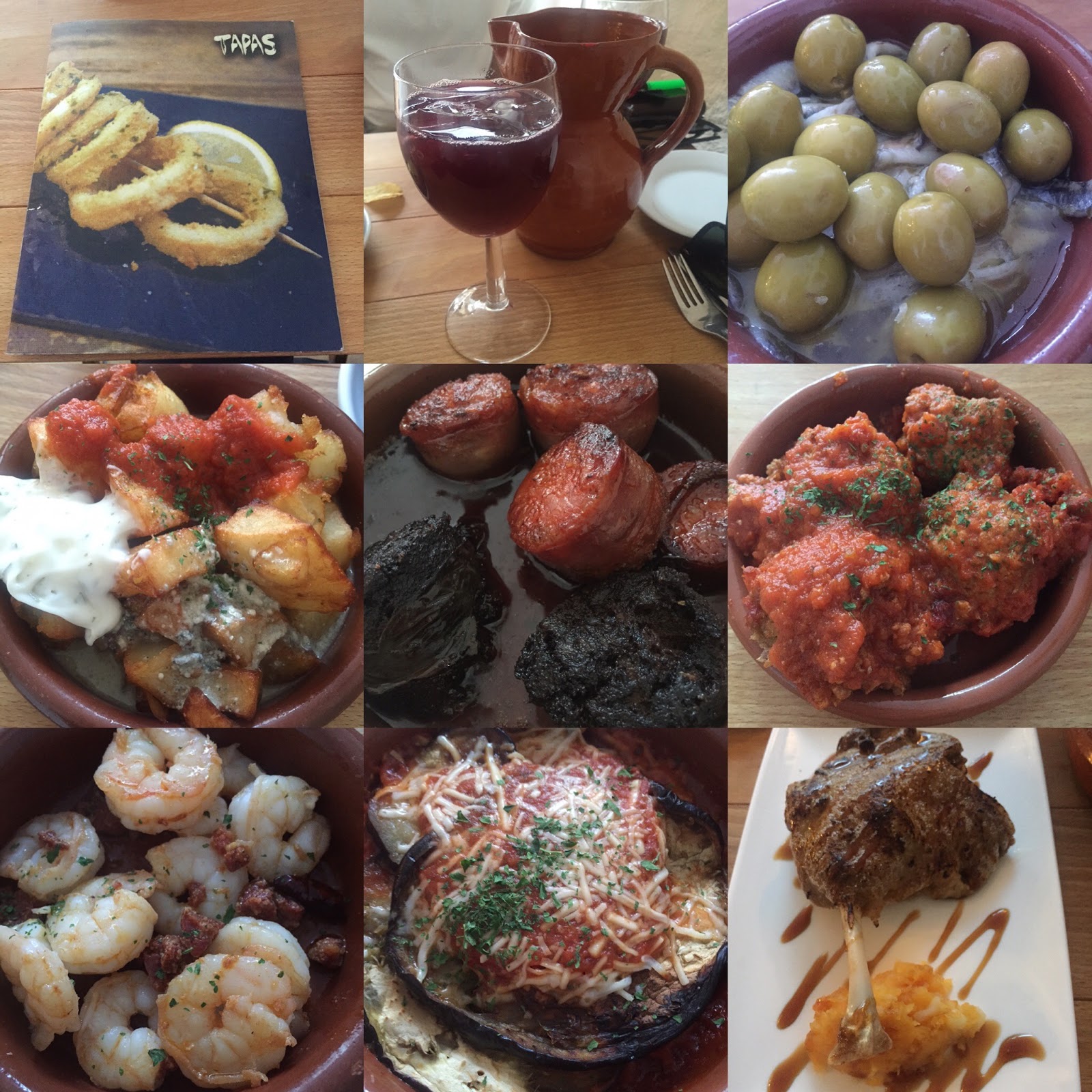 I have been due to post a full review of Solera for aaaages, so long in fact that I had to go back again for another meal, just to consolidate my experiences. I am mid-way through writing both meals up but for now just know, if you go- don’t bother ordering the aubergine or the meatballs, and definitely do get duck, pig’s cheeks and sangria. They’ve had a rebrand of their menus since visiting and I think it’s a bit of a disaster… keep your eyes peeled for chapter and verse on it being posted, imminently.

So talk to me, Brighton readers- where have your best meals out been recently? Hit me with your recommendations in the comments section at the bottom of the post or via a whole host of social networks (links below).