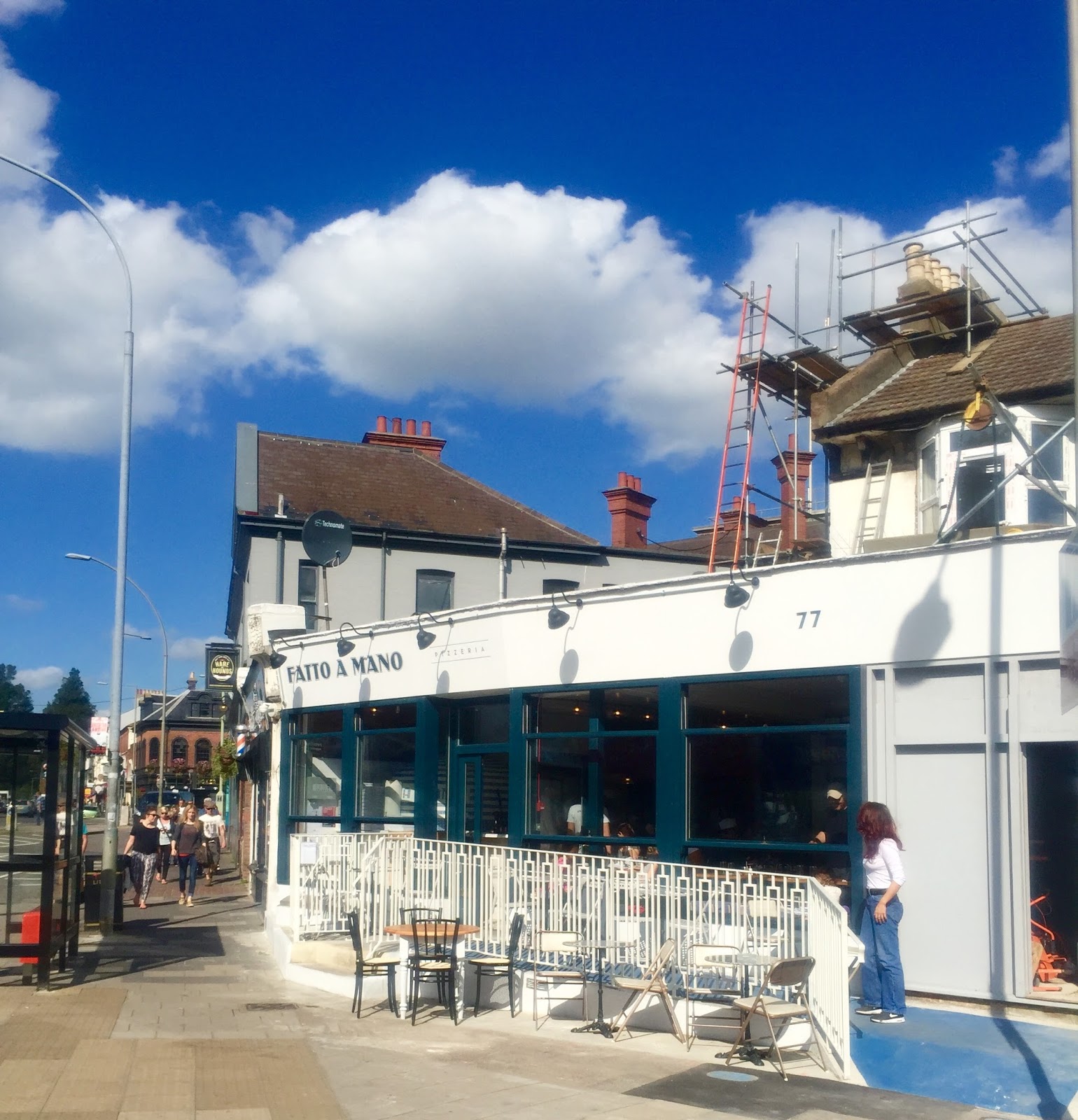 I’m not going to go off on one again about my ongoing quest for the perfect pizza, but you can read all about it here, and just know, I’ve taken a lot of carbohydrate laden bullets for the team when it comes to what Brighton pizzerias have to offer.

What I will say is, I know what I’m looking for in a pizza, and as soon I heard about the newest addition to the burgeoning* London Road food scene, my little antennae were well and truly pricked up. I left it a few weeks before heading down to Fatto A Mano with my one and only pizza pal The Graphic Foodie, and then again a couple of weeks later, just to make sure… I did it for you, ok?!

*make no mistake, London Road is still a total dive, it is not, and never will be, ‘Brighton’s answer to Shoreditch’- but if you do care to venture down there, there’s some really great places to eat, now. 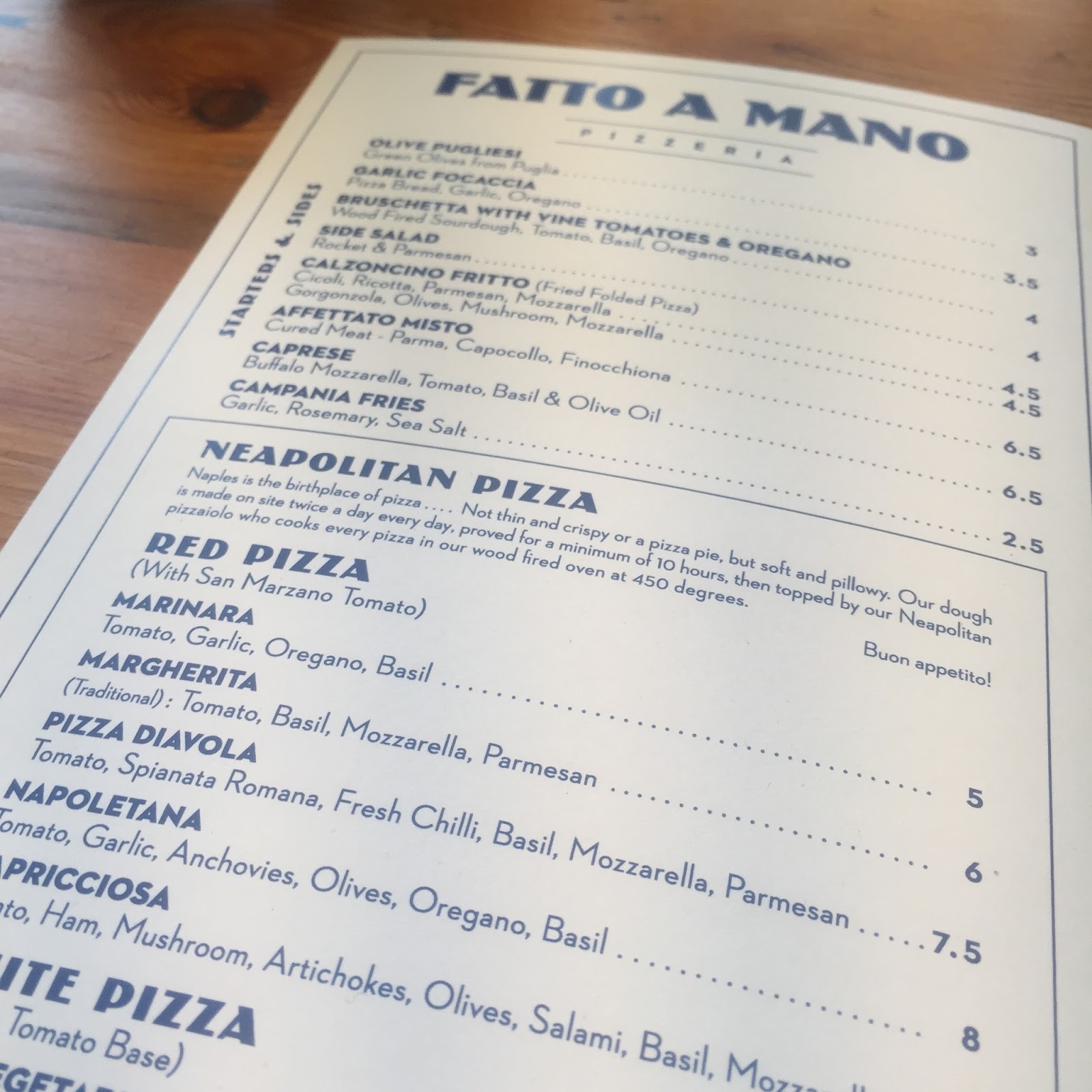 The pizzas take centre stage on this menu, with a choice of red or white base, calzone or saltimbocca (pizza sandwich) and a handful of starters, salads and sides, as well as an ever-changing specials board. Both Fran and I thoroughly approved, especially in light of some of the absolute car crash menus we’ve seen along the way… 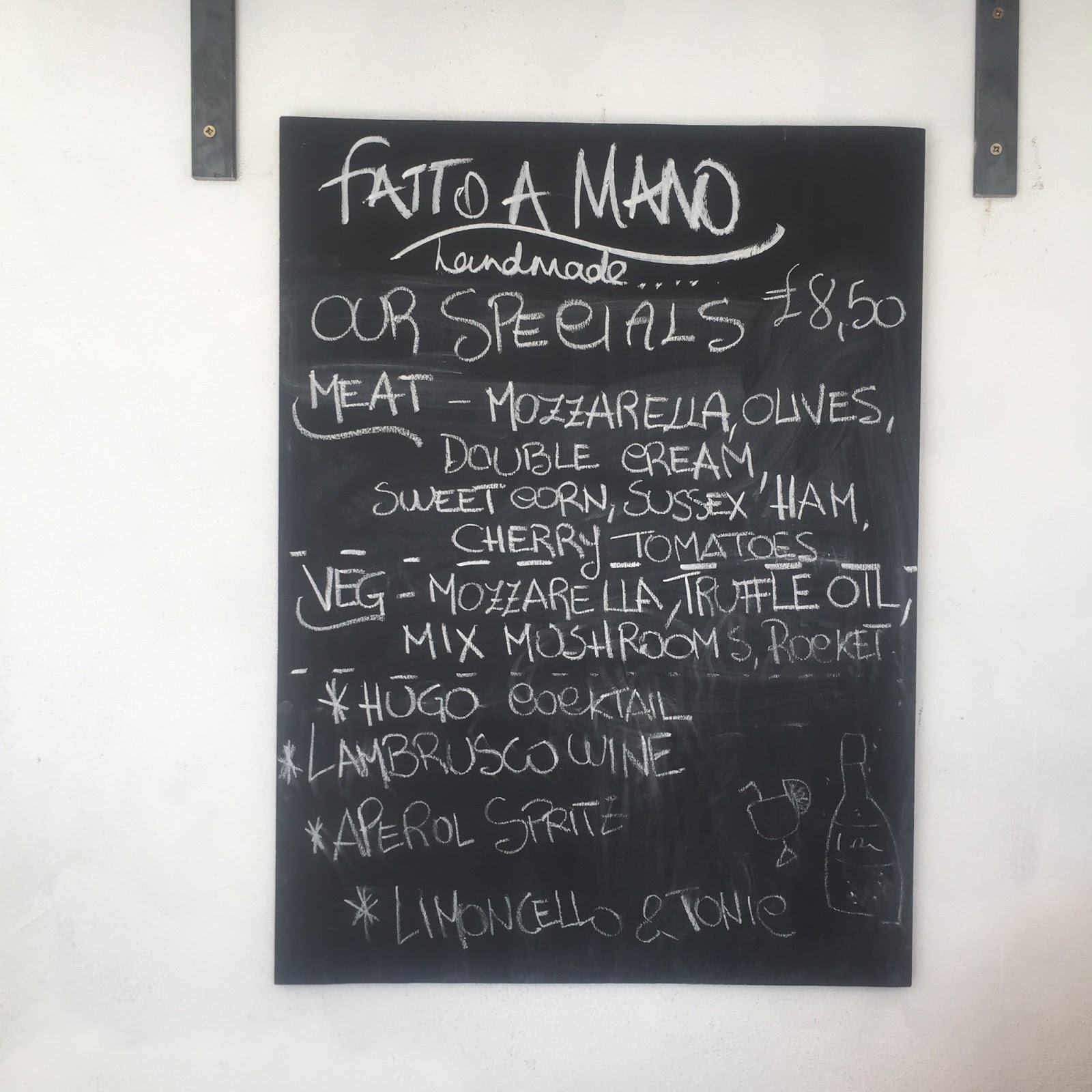 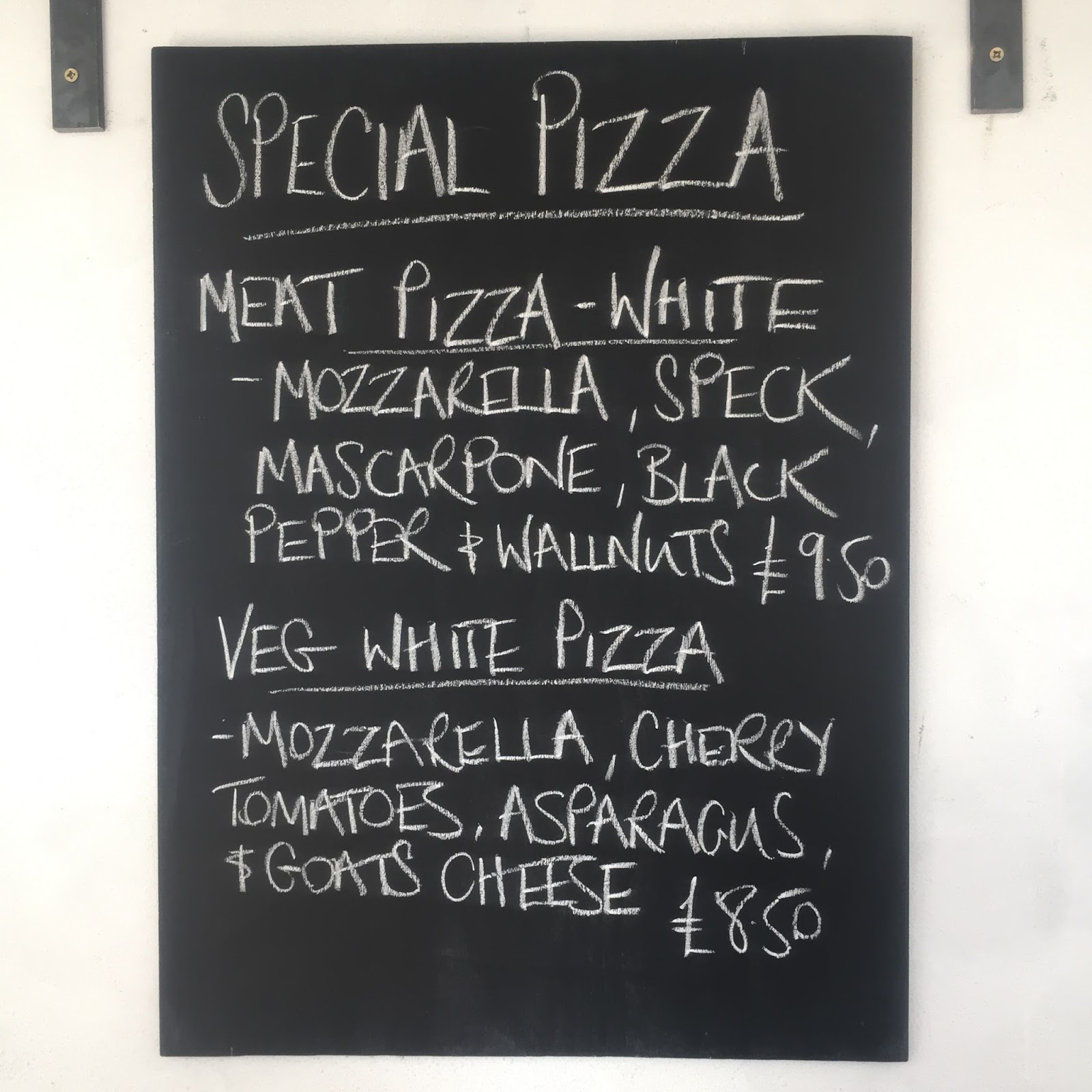 In the interest of true transparency, I have to admit that the first time I paid Fatto A Manno a visit I was in a bit of a state.  I was having a week of absolute doom and had barely eaten a thing for days but as I said on Twitter en route there; ‘nothing, and no-one fucks with the Brighton pizza challenge’- and I meant it. The second time, however, I was bang on form and raring to go in terms of appetite. 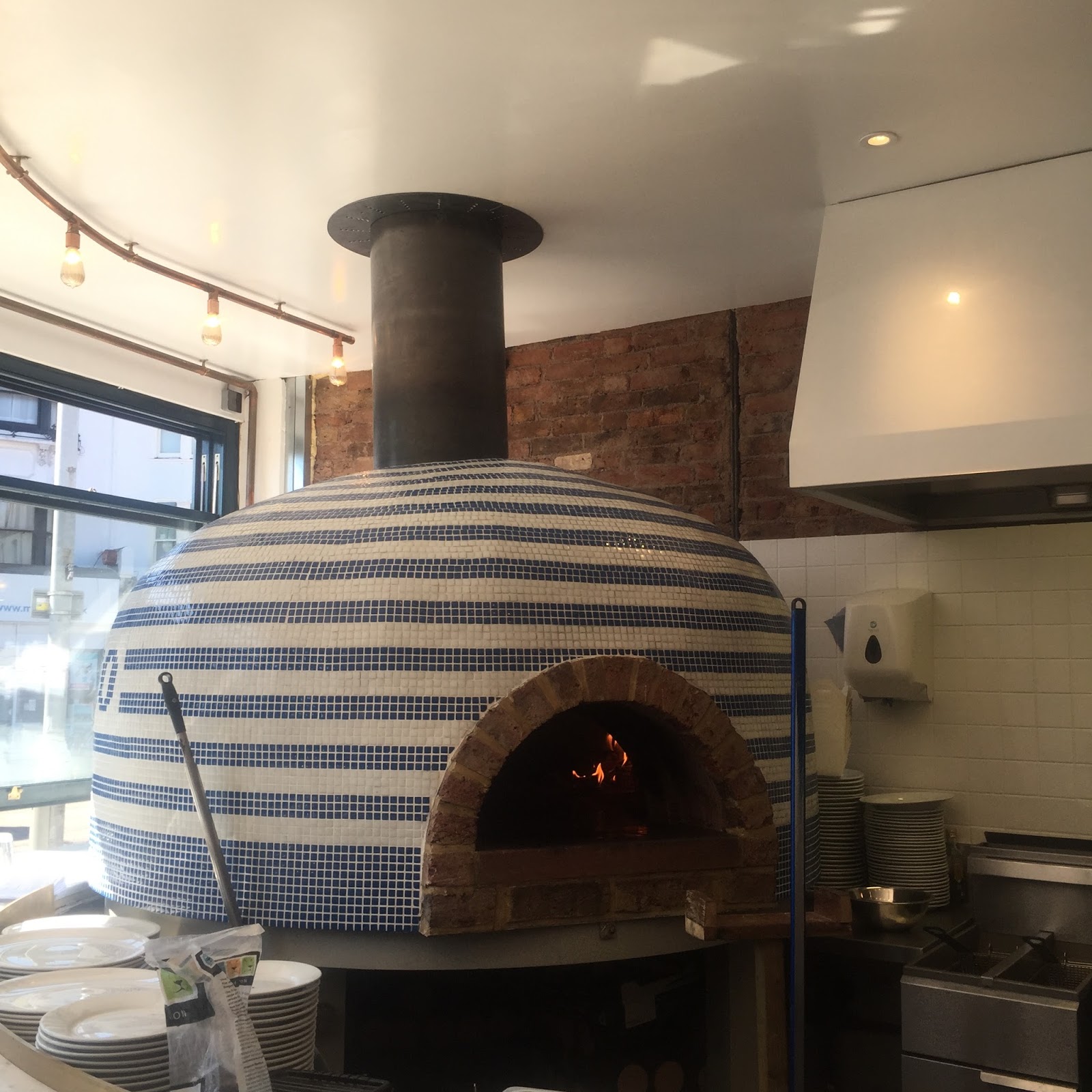 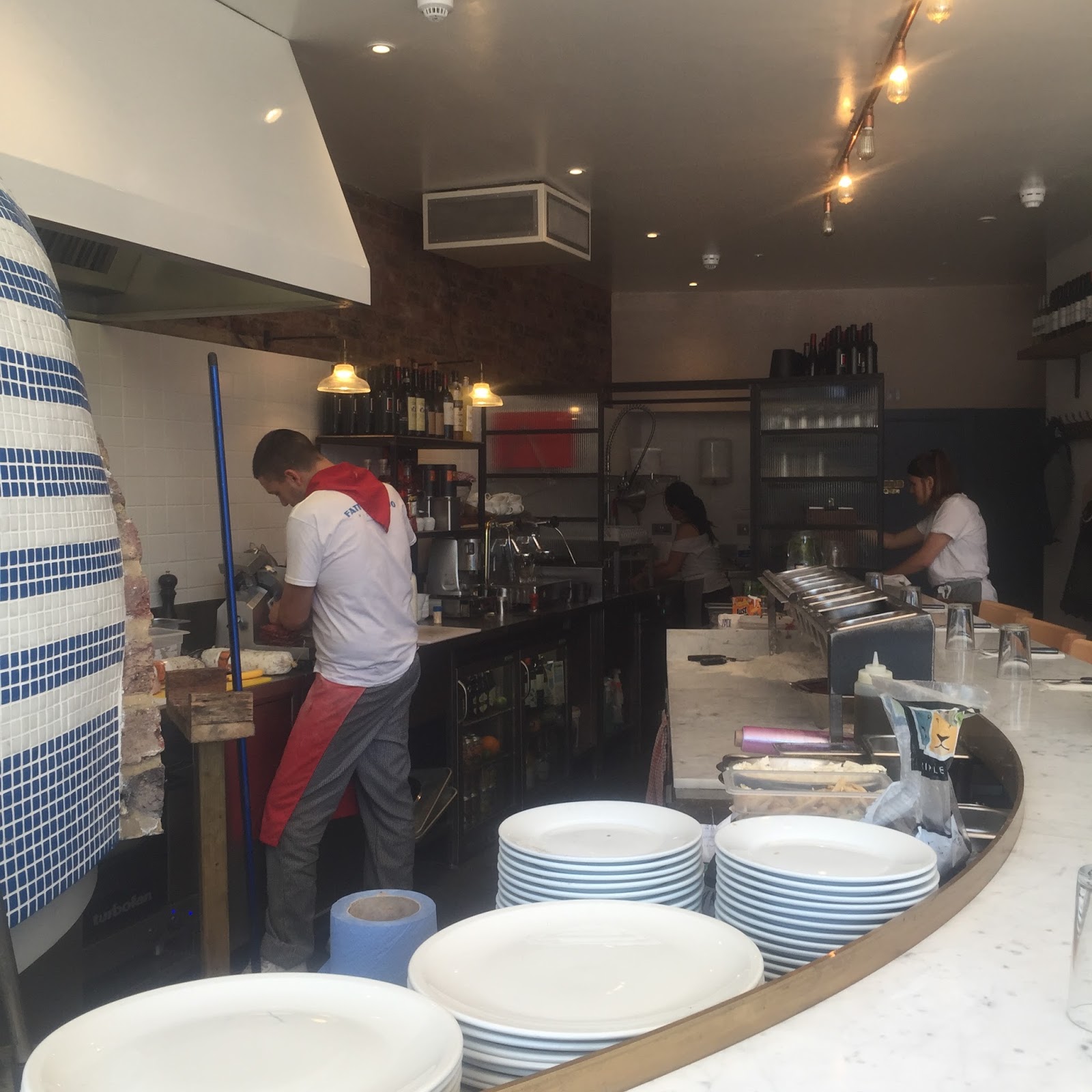 Unlike the majority of their Brighton ‘competitors’ Fatto A Mano are one of the few with a wood-fired oven. It’s an enormous, ceramic affair which is expertly manned by the former chef from my fave Lewes restaurant, The Hearth, and his team.

Quick sidenote about the pizza, if you’re wanting thin and crispy… go elsewhere. This is Neapolitan pizza so expect the dough (which is made on site) to be soft and pillowy- with a pleasing charred flavour, courtesy of the wood-fire. 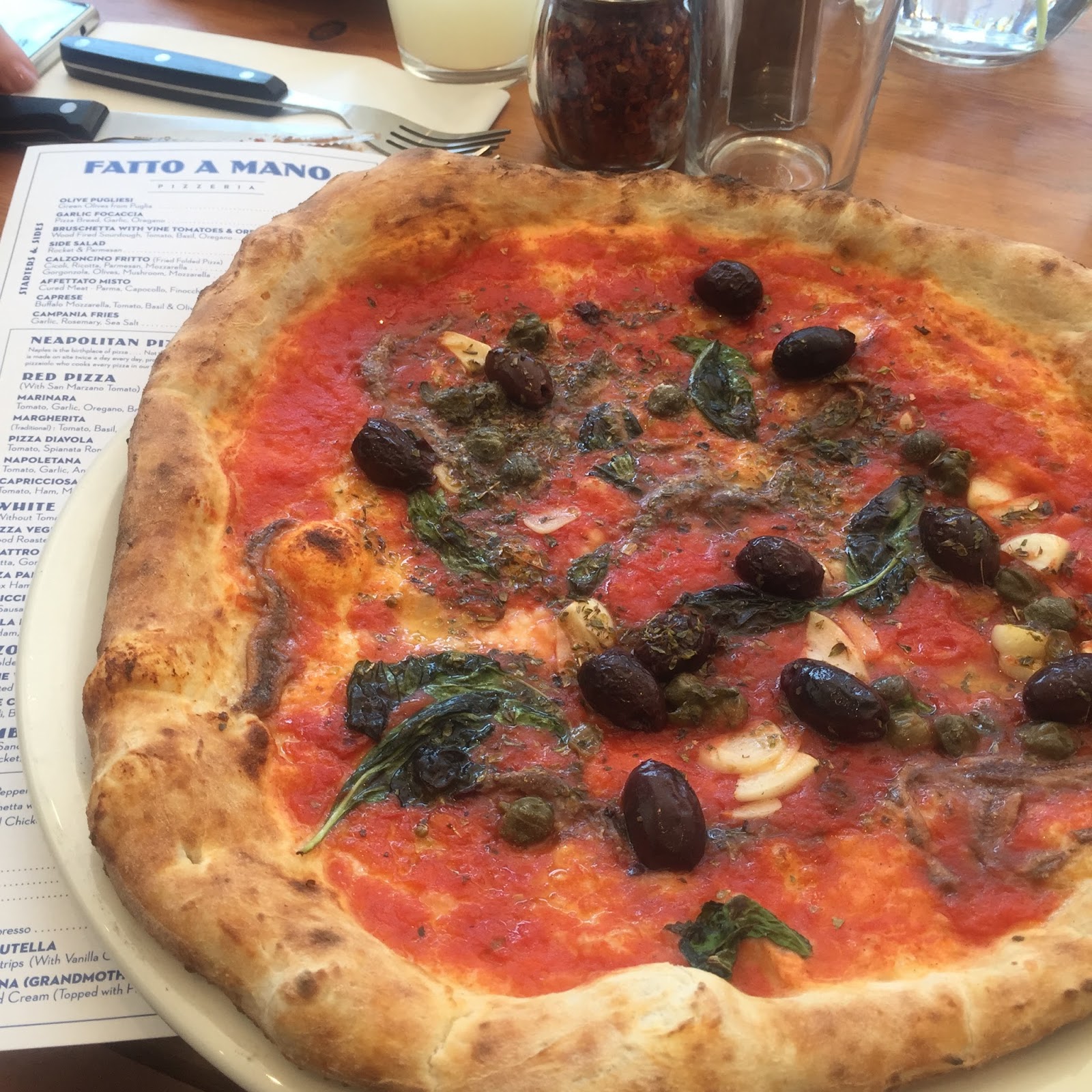 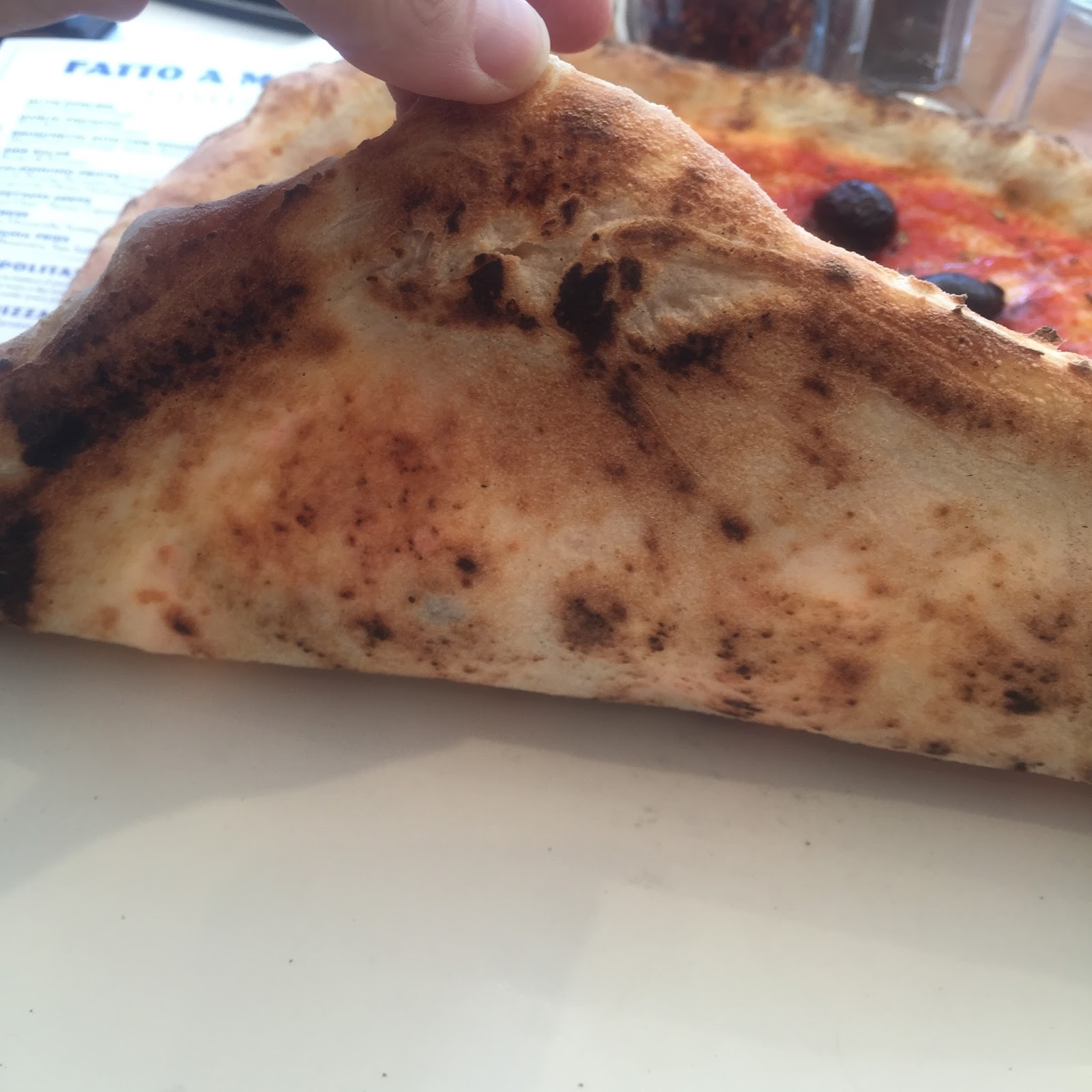 I ordered a Napoletana as it’s one of my favourites and has enough ingredients for you to be able to judge the overall quality of the food. I barely glanced at the menu, just ordered and I can’t lie, was a bit gutted when I discovered it came without cheese, as hadn’t done at my other favourites, Nuposto and The Hearth.

With or without cheese it was delicious, and reminded me very much of the pizza I’d had, and loved at Jamie Oliver’s (twice). All the toppings were lovely quality (no rank budget olives here) but they went far too heavy on the garlic, about a quarter of the amount used would’ve sufficed for me- so if you aren’t a massive fan this is something to be aware of. 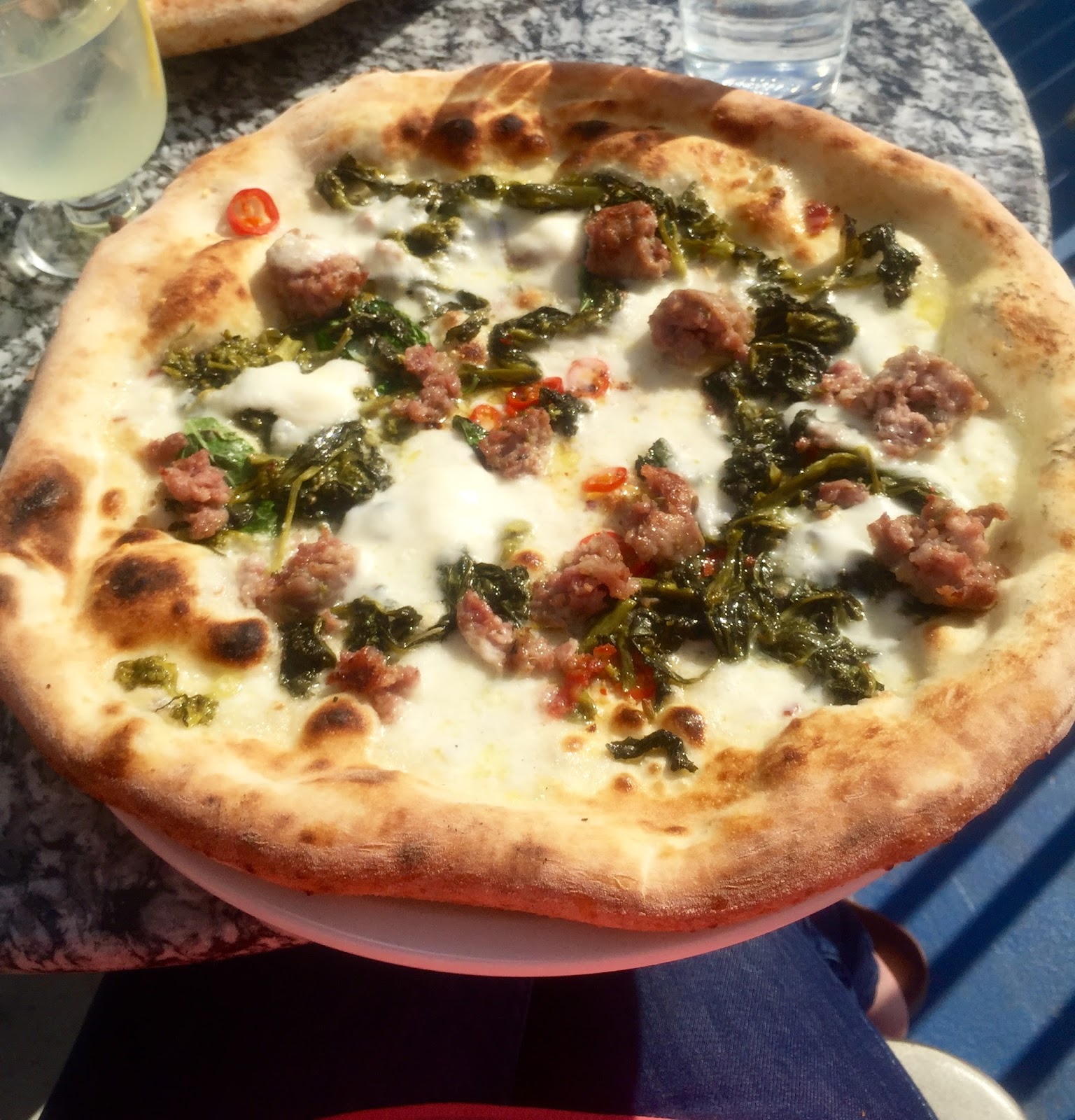 I’m not much of a fan of a white base- nothing against it, I’m just all about the tomato when it comes to my pizza, but was dying to try the sausage, as well as my first experience of friarielli (Italian broccoli) and neither element disappointed.  The sausage was coarse and flavoursome and the friarielli was a cross between spinach, broccoli and my fave Asian veg- morning glory- de-lish. 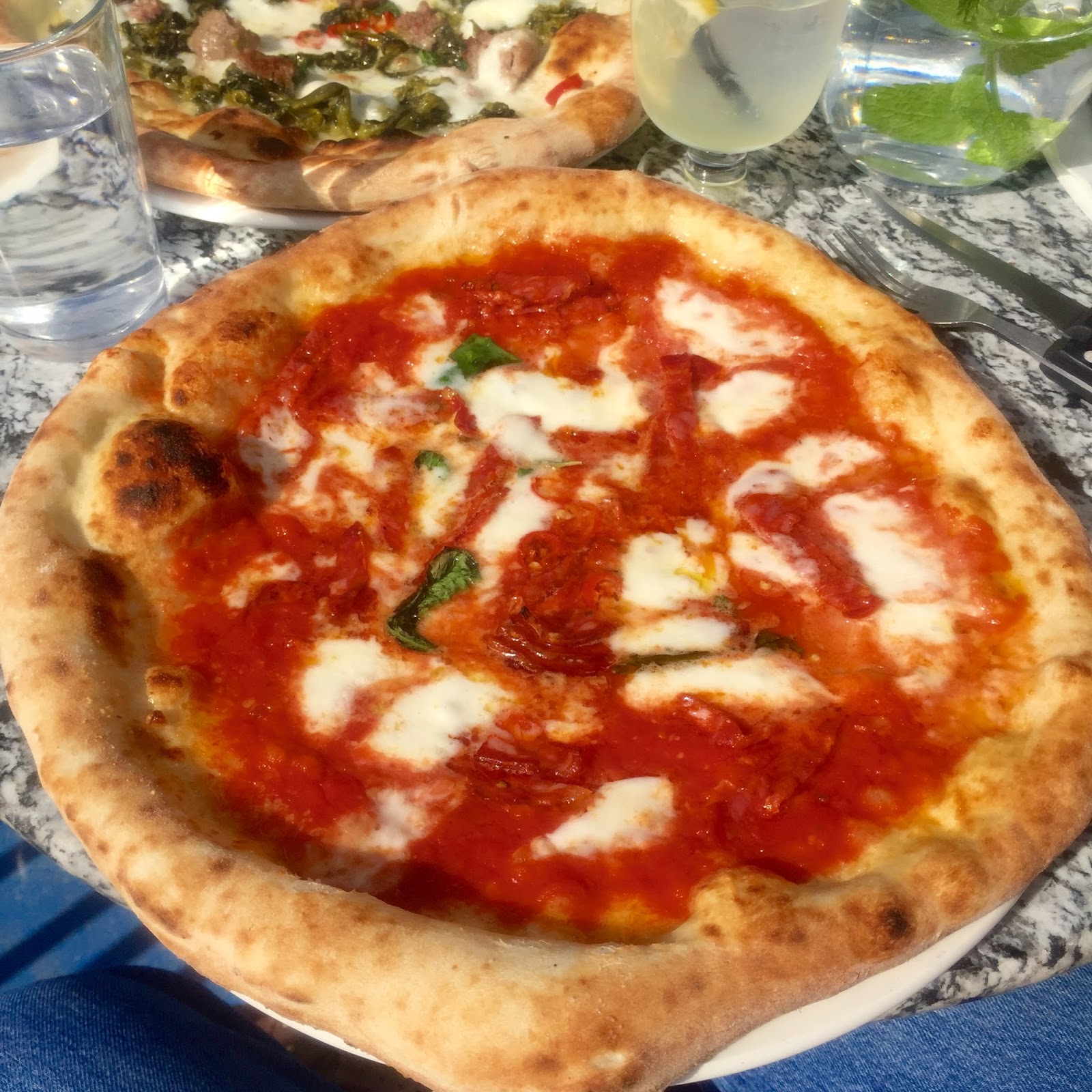 Doesn’t look like much but was delicious. It was a fairly scant amount of topping but all lovely quality and really tasty. Not mega spicy so if you’re hoping to have your face blown off, I’d ask for more chillies. 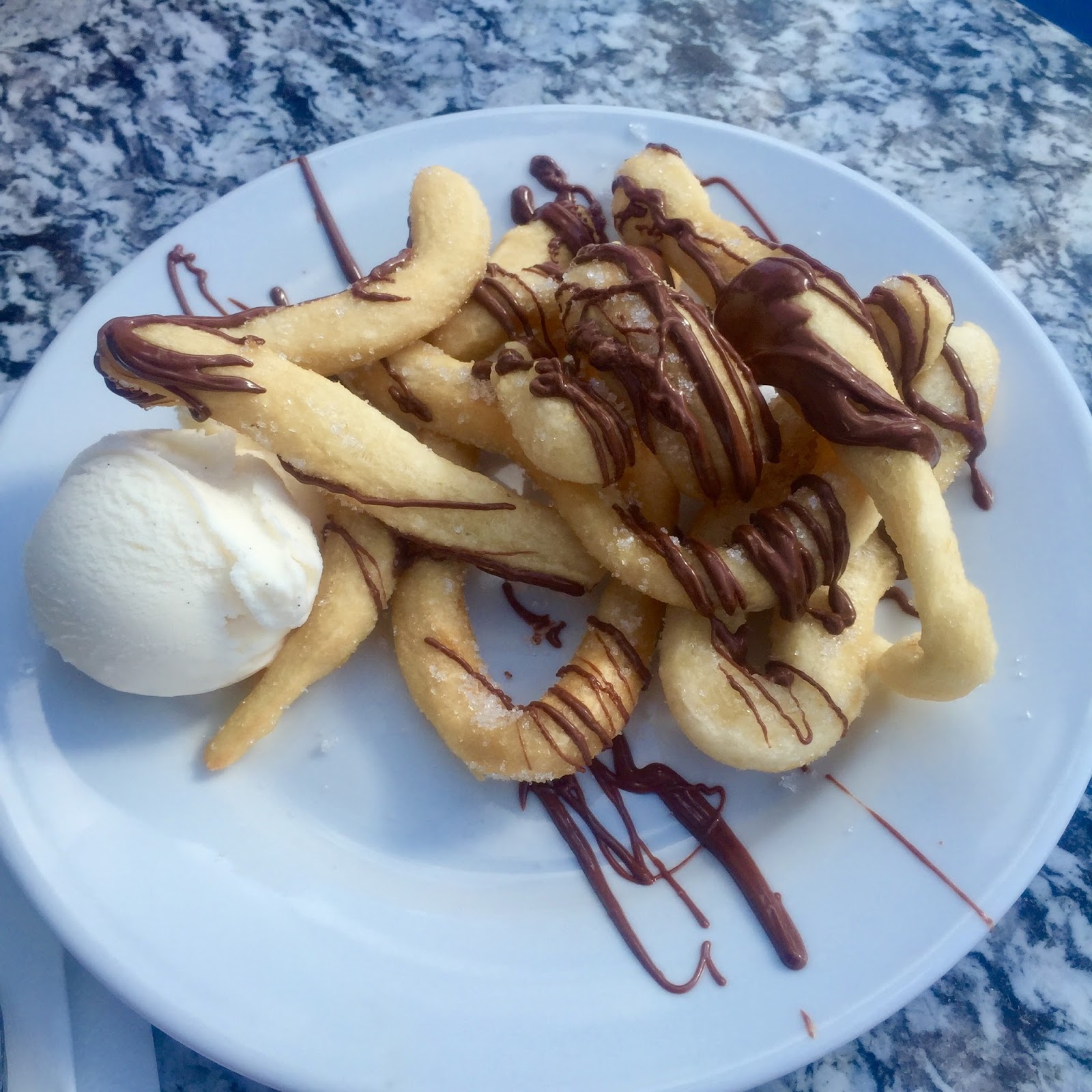 These were special. Fried scraps of pizza dough, drizzled with Nutella- the Italian version of churros what’s not to like?! It really is pretty much everything you could want from a dessert* really- fat, carbs, chocolate and ice-cream. We shared them and it was just the right amount. Genius move on their part too, they must cost pence to make.

*The gelato is not made by them, which I think is a shame, but hey ho at least they make their own dough on the premises, unlike some, who fly it in from Italy… 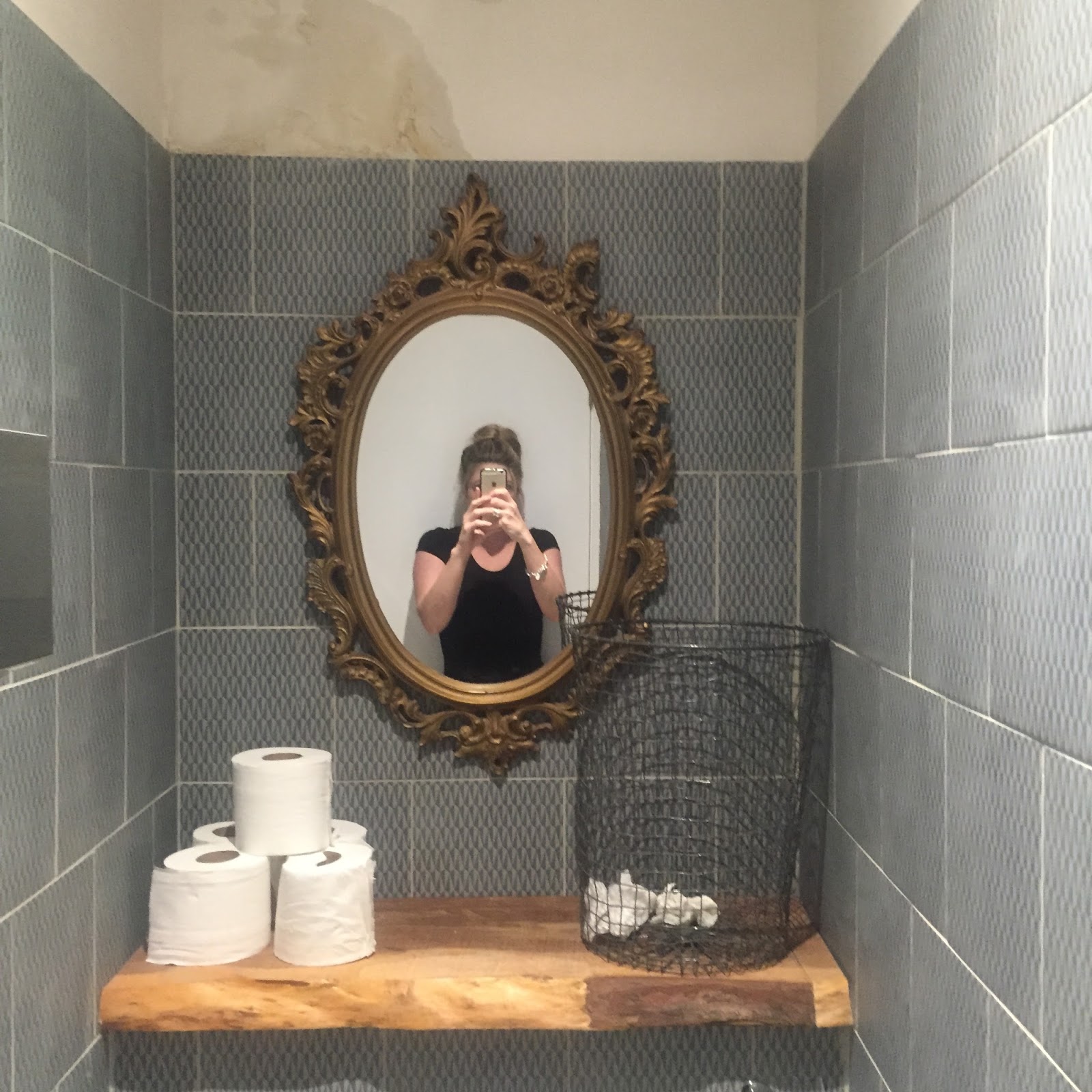 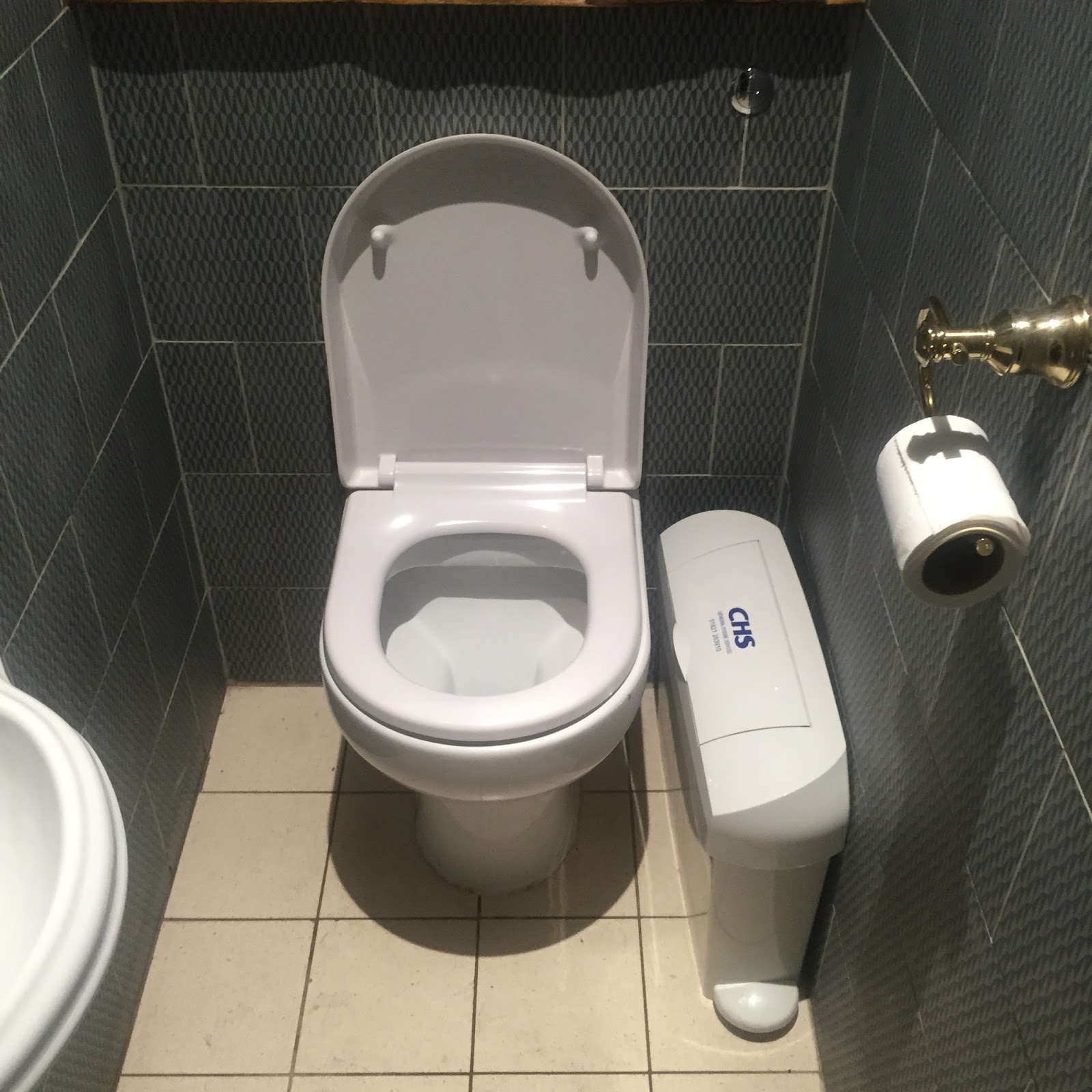 #toiletcam all present and correct 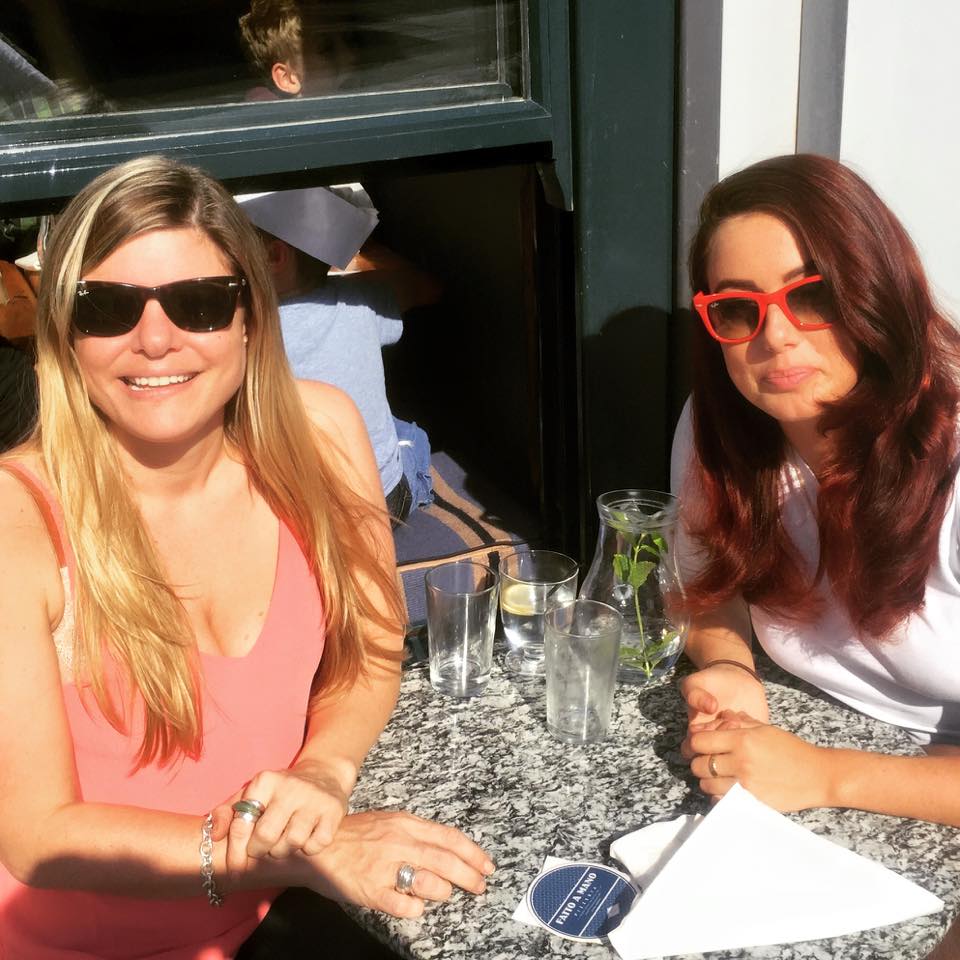 This pic was taken in September- YES to Indian Summers

So all round it was a big thumbs up from me, on both visits. Do I prefer it to my previously proclaimed winner? The answer is no. No doubt I’d be wetting my pants over Fatto’s offering had Nuposto not set the bar high and made our pizza dreams come true… but it is an extremely comfortable second place, sitting just above the likes of Pizza 500 and Jamie’s Italian, in my pizza hierarchy.

Would I go back? Absolutely. I’d especially recommend to anyone with kids, as they eat free with an adult ordering a main course- bargain.

Have you been to Fatto A Mano? Do you think it’s the best place to eat pizza in Brighton? If not then where?? Talk to me in the comments below or on all manner of social networks (links top right) x