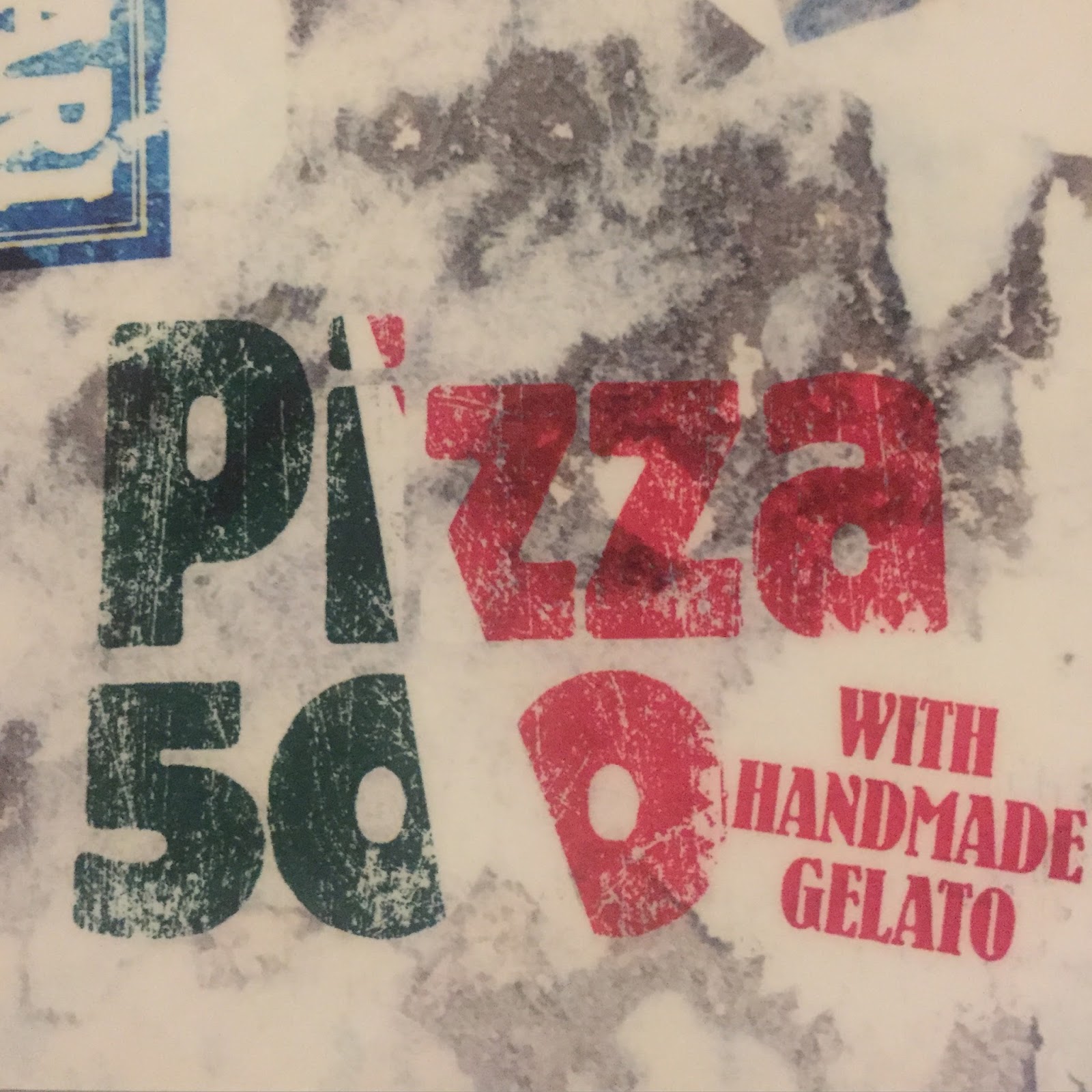 With more and more reasons popping up to head to London Road in pursuit of a good feeding.. I’ve got another one to add to your list. Pizza 500 is tucked away under the archway (viaduct?) on Preston Road, you’ll probably have driven past it and not even noticed, as I did for years… but not any more.

When it comes to Italian food (not just pizza) in Brighton, it’s a pretty mediocre landscape across the board. There’s half a dozen or so in central Brighton which are ‘popular’ but nowhere I would spend my money.

If you’re sick of flaccid Hawaiian pizzas and rubbish bolognese, and just want honest, Italian food; then you need to be getting Pizza 500 on your radar, pronto. 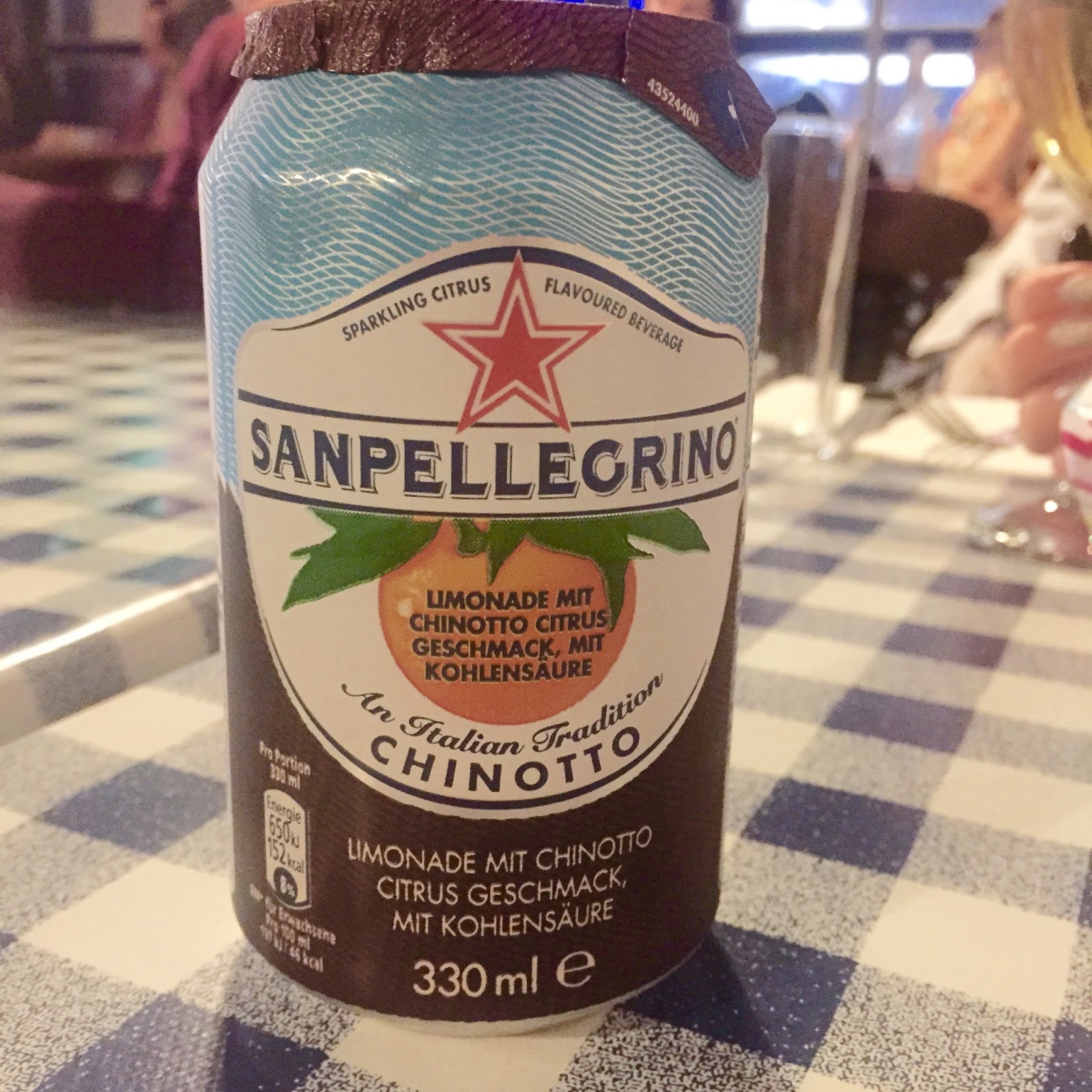 Introduced to me by my one and only #girlwithgluten Fran (The Graphic Foodie) this really is the natural alternative to my beloved Coca Cola, or, ‘Red Ambulance’ as one of my colleagues calls it, rather wittily I thought.  It’s actually made with orange and as is made by San Pellegrino I should imagine it has about 1% of the poison in it, that my old buddy, Coke does. It’s the perfect alternative when you need the fix but not to pollute yourself.

I have to confess, after 5 months clean, I’m back on it… Only a few cans a week, but I’m disappointed with myself, as I really thought that I’d cracked it this time.  Definitely one of my New Year’s resolutions for 2016, along with mine and Fran’s joint resolution to feature on the #girlswithgluten instagram account… I’ll keep you updated on our progress. 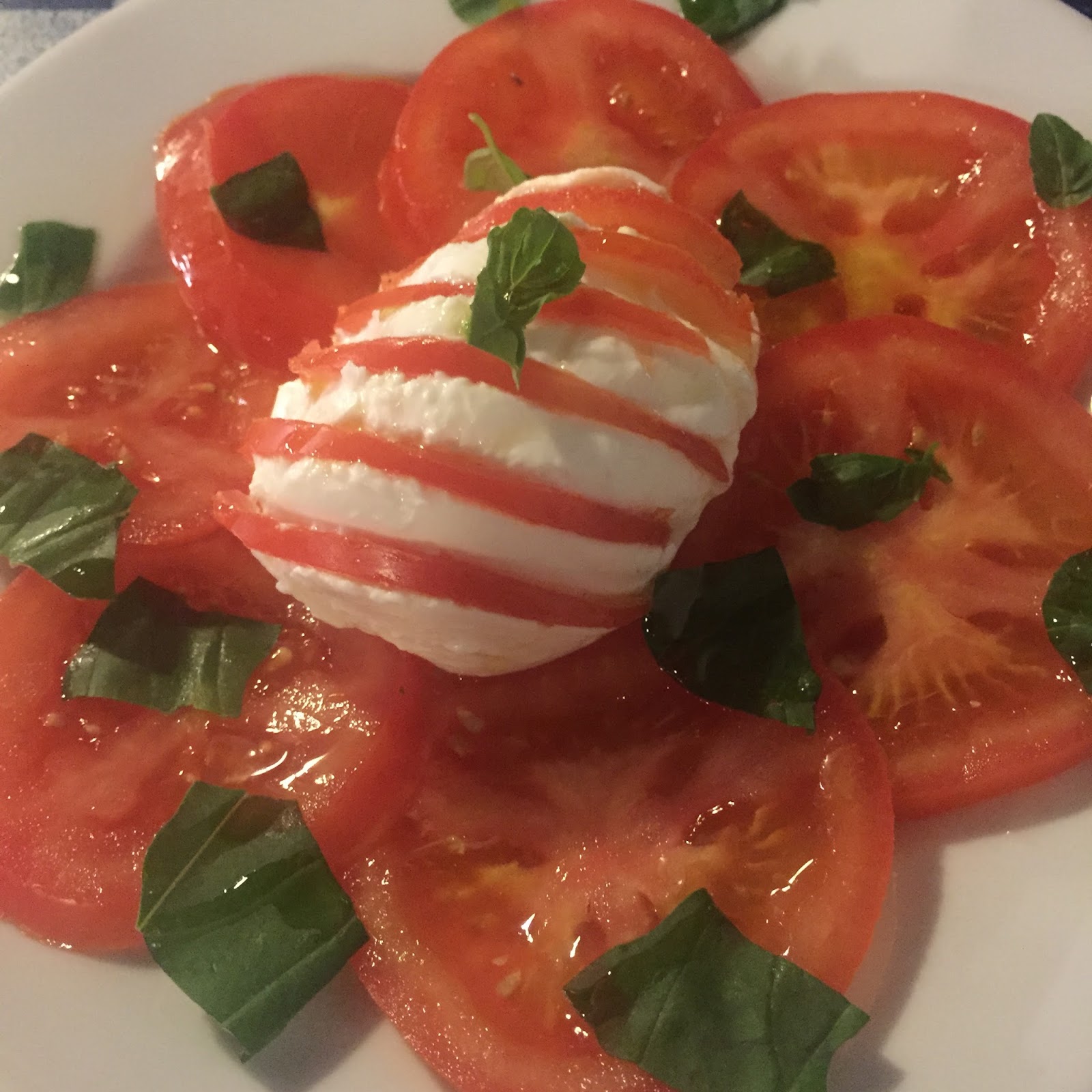 This was my friend’s and when we asked for oil and vinegar we were greeted with a wrinkled nose, a look of disapproval and being told it would be better without… I for one LOVE being told what to do like that in a restaurant, I like people who have the courage of their convictions and strong feelings about the food they’re serving.

And so our salad remained untouched by vinegar- they were right, it didn’t need it. 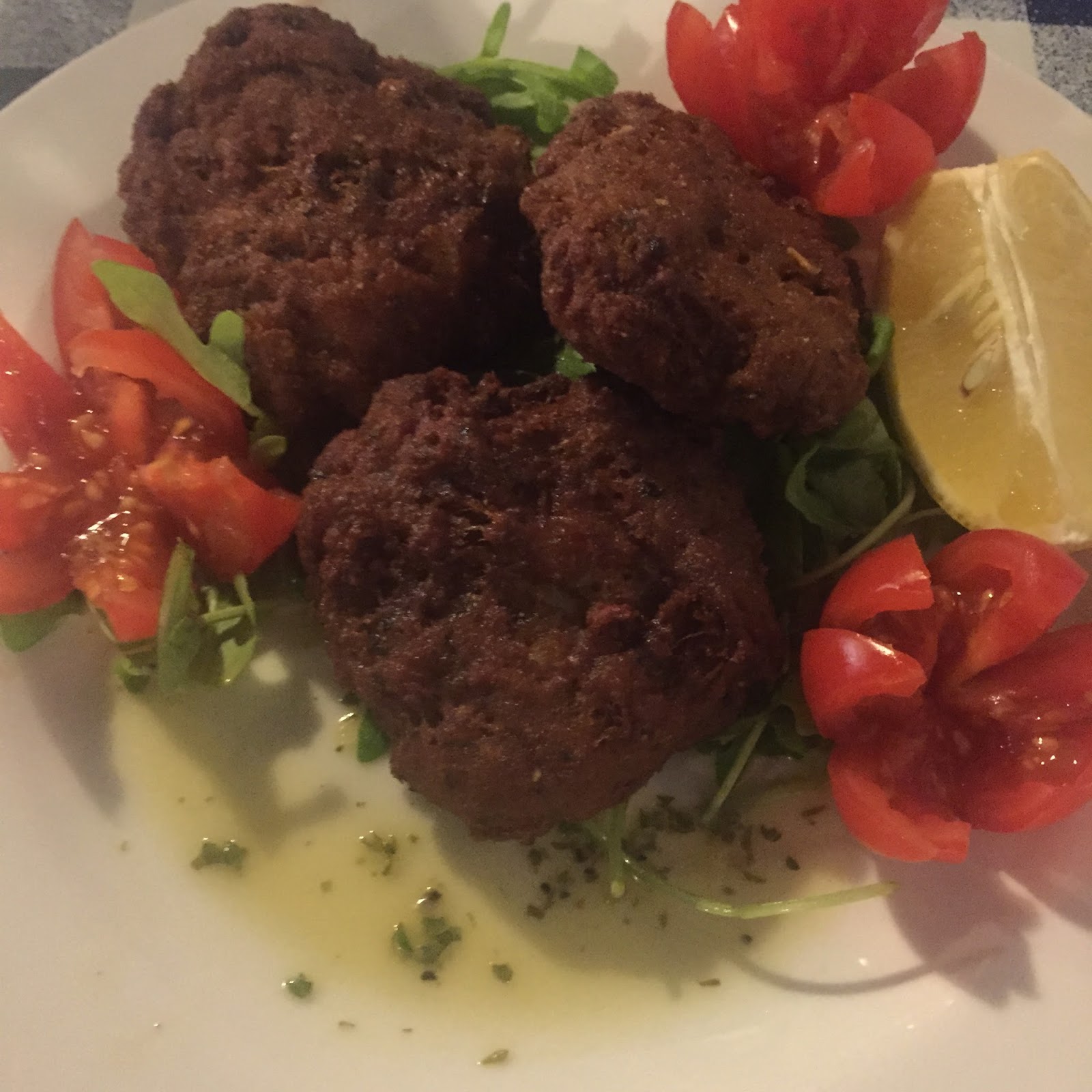 The last time I visited I got these to take away. Leo, the owner, was reluctant to let me as he said they are severely compromised by being covered and then travelling- and delicious as they were, he was right, they didn’t compare to these ones fresh from the pan.

The octopus meat bound together by seasoning and breadcrumbs (possibly potato), were then fried until crispy and incredibly delicious. Your impulse may be to think these would need a dip, mine was, but they were great on their own, especially when piping hot. 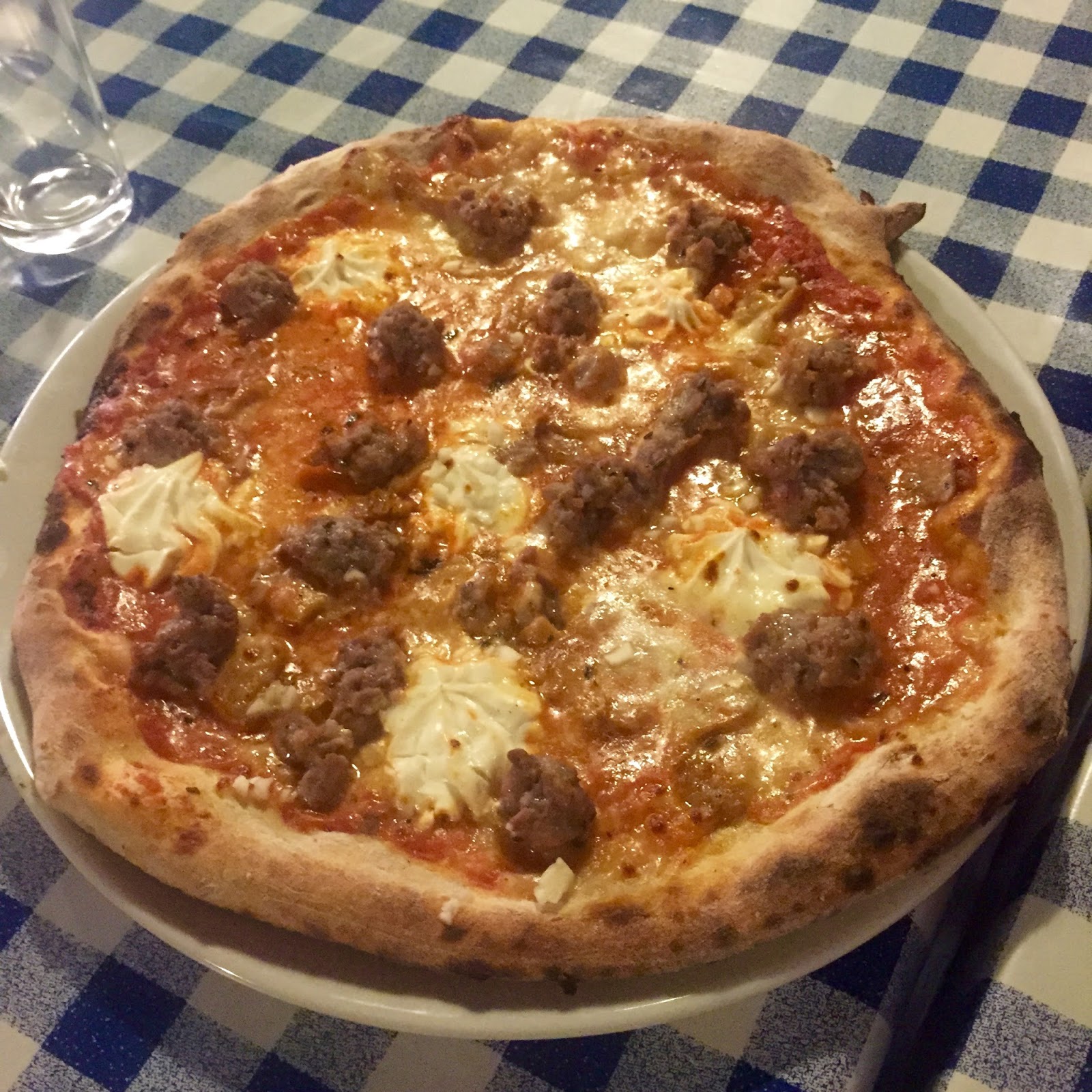 Those of you who follow my extremely well documented pizza obsession will know, that I am already a big fan of the Pizza 500 pizzas. Despite being an electric oven they still get the puffy cornichione with lots of leoparding, and because it’s not a Neapolitan pizza like my other favourites Nuposto and Fatto A Mano, the base of the pizza is crispy, something I’ve discovered many people prefer.

There was a generous amount of the toppings which you could tell just by looking, were good quality and lovingly prepared. I’m a sucker for sausage, and mascarpone too. The most expensive pizza on the menu, I’ll definitely be ordering this on my next visit, a small slice wasn’t enough! 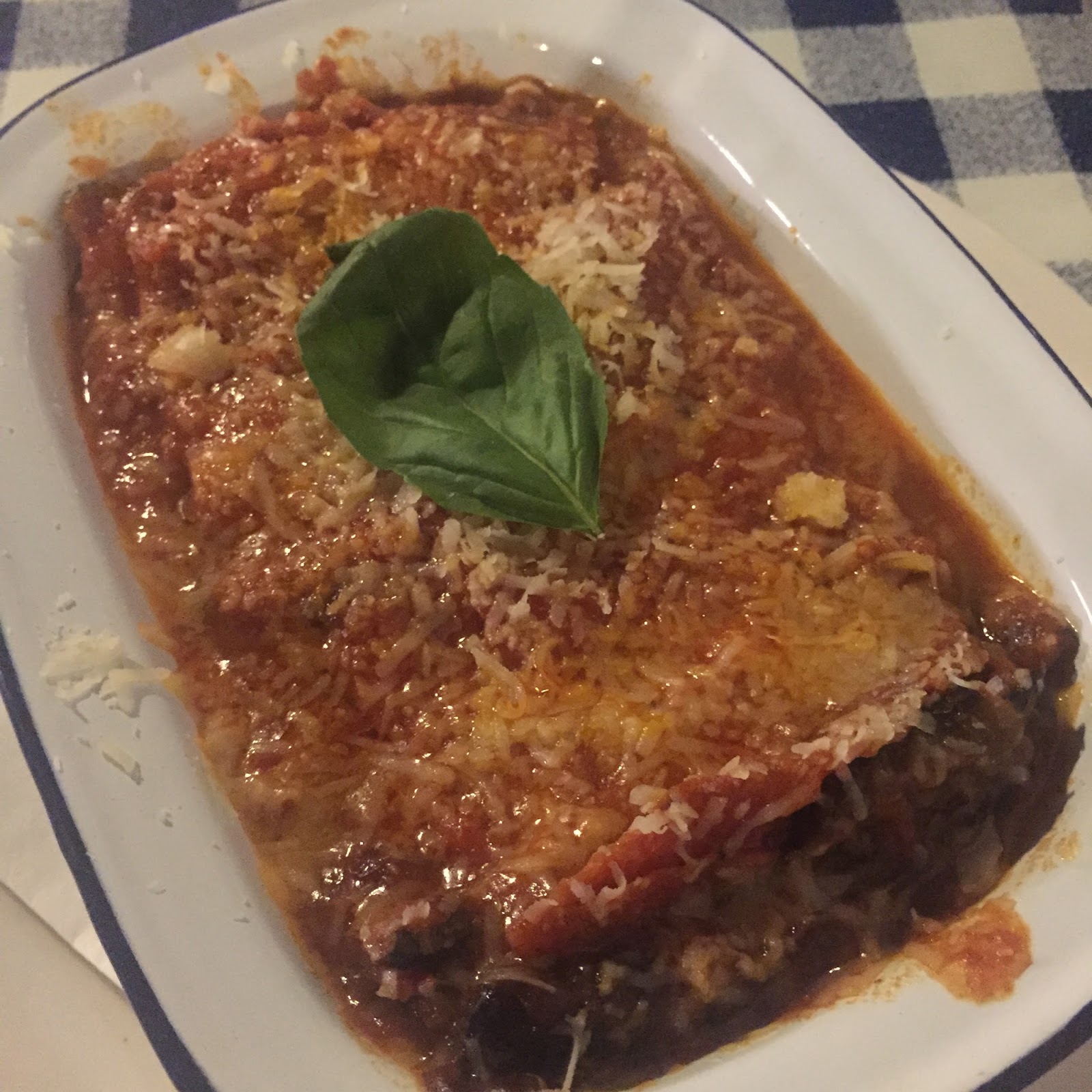 Easily the best melanzane I’ve ever eaten. The aubergine slices were layered throughout with rich tomato sauce and stringy mozzarella, with a bonus layer of salami on the top beneath a thick parmesan crust. The aubergine was cooked perfectly and wasn’t at all spongy or squeaky like it can be sometimes (you either know what I mean by that, or you don’t). They’d not skimped on anything, and altogether it was one of the most pleasing, and comforting things I’ve eaten recently- highly recommended and they do it without meat as well. 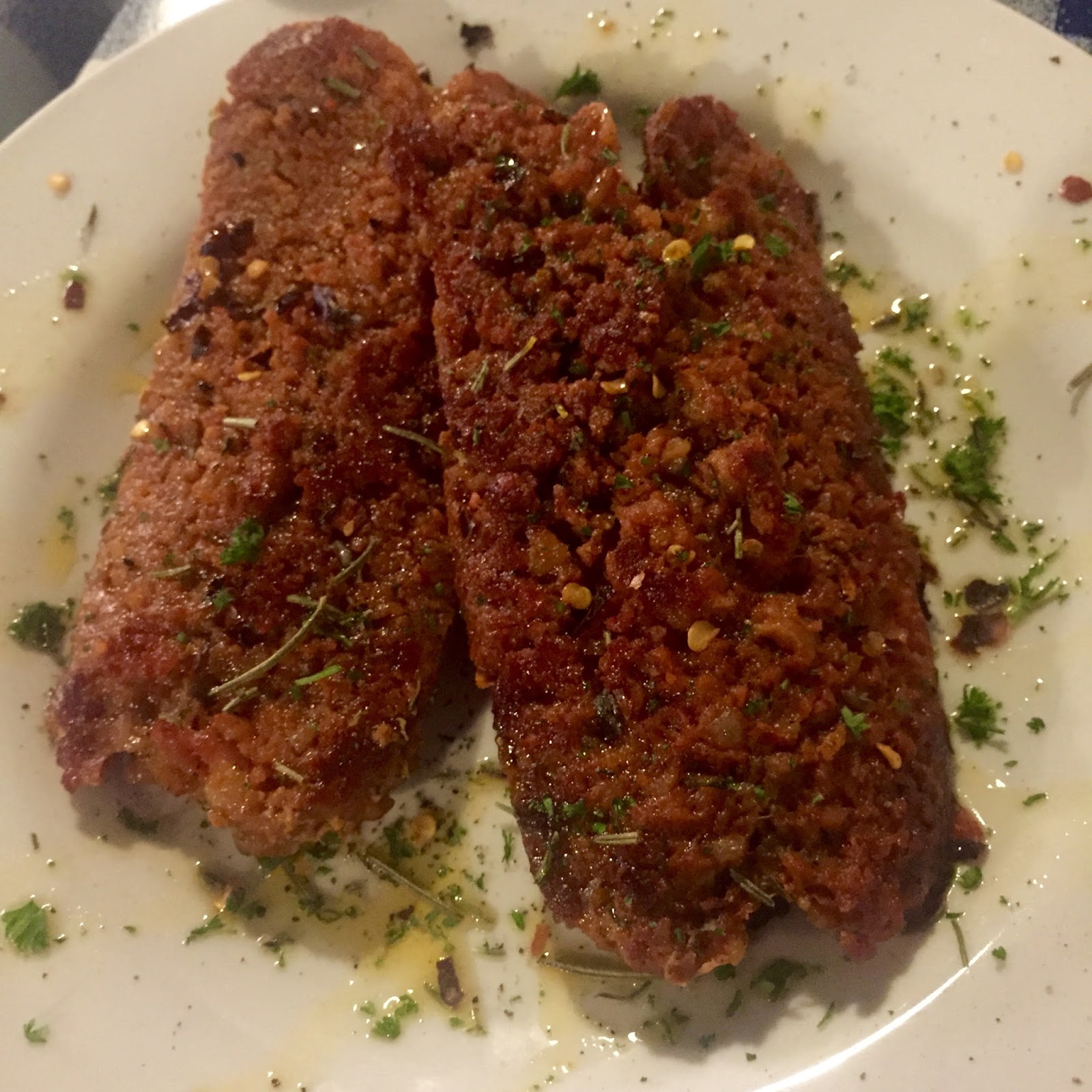 I went for the spicy sausage (smirk) and it really did pack quite a punch. Seasoned with fennel and lots of salt and pepper, the coarse sausage meat was firmer than your common or garden banger, but I really liked it.

When I posted on my Facebook page saying I was going to be visiting Pizza 500, someone commented telling me not to bother with the sausages as ‘they’re far too salty’.. but I wanted them so that was that.  If I had to put my hand on my heart, yes, they definitely will be a bit salty for some people’s tastes so do be warned. But I loved them, and would definitely order again. 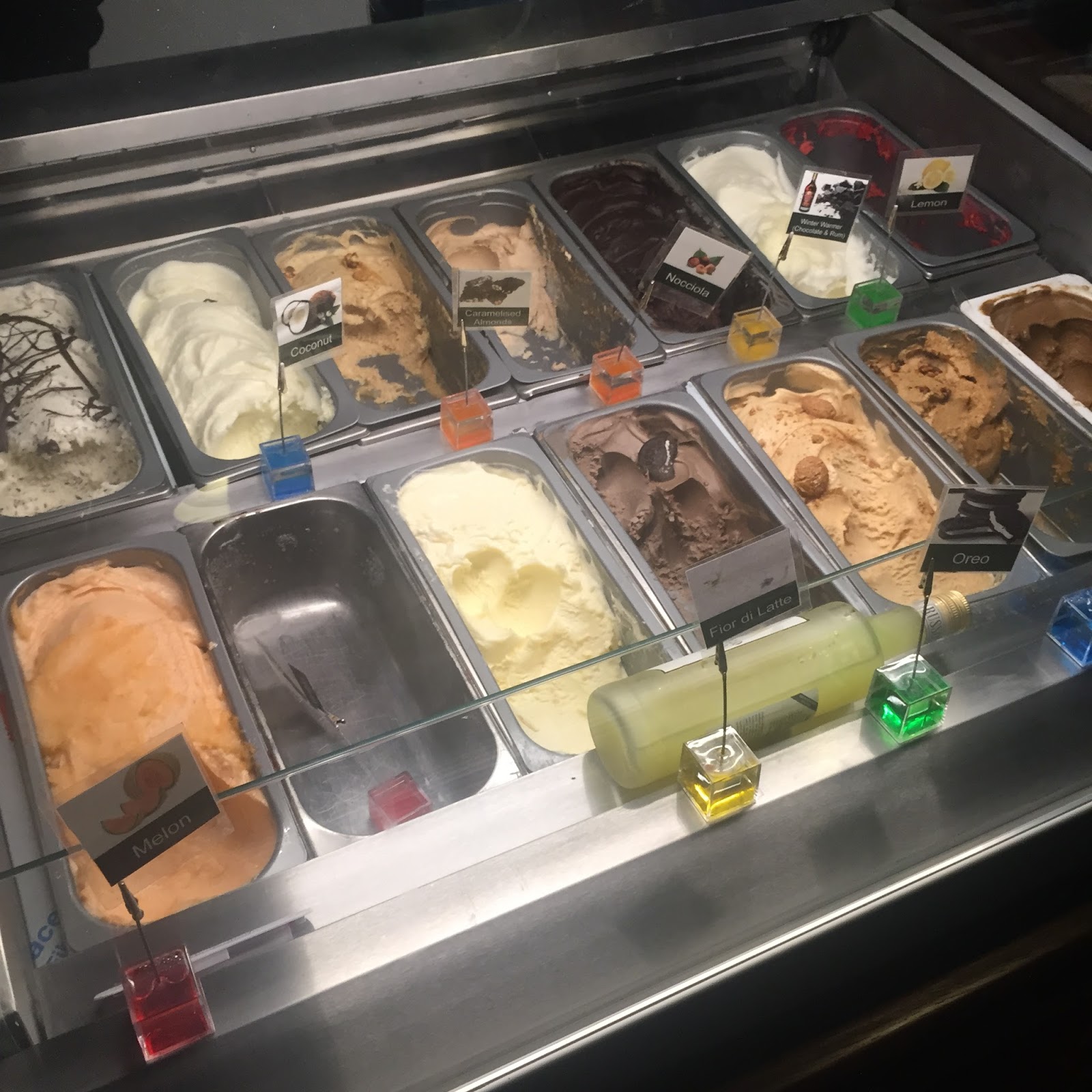 They make their own gelato on the premises, something they’re proud of, and rightfully so. They were creamy and delicious and I struggled to pick from the incredibly tempting line up.

We each had a scoop of the caramelised almond and I had one of hazelnut too. If I had to level any sort of criticism I would say that the hazelnuts had caught when being roasted, and it tasted very slightly bitter- nothing that prevented me from demolishing the whole lot though- just an observation. 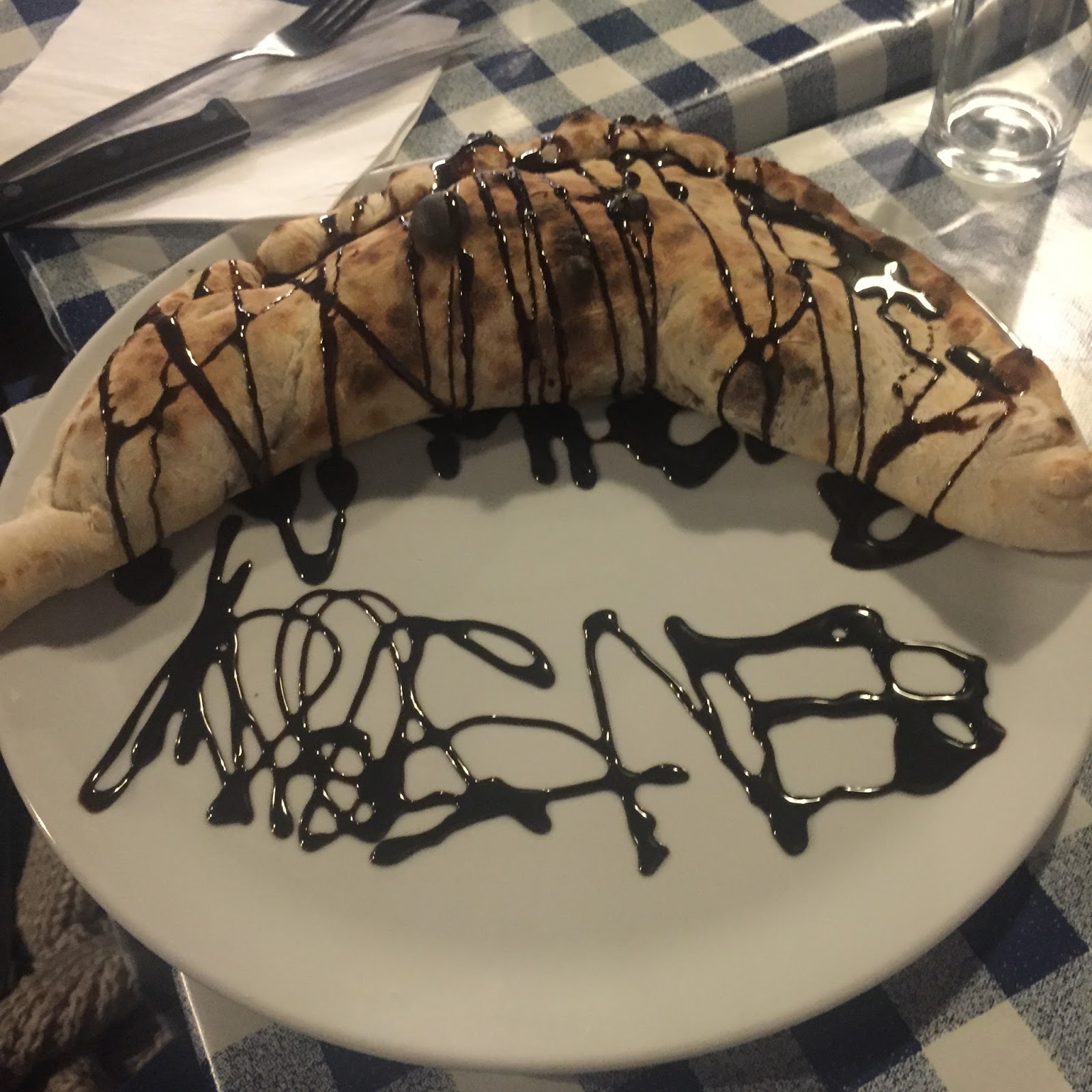 The last time I came in I was so hungover that I decided against ordering one of these and they’d said  that there’d be one with my name on, on my next visit… and there was.

The folded dough was filled with nutella and mascarpone and was as you’d imagine really- ridiculously decadent and totally food coma inducing, in a good way. They do a smaller size too if this looks a bit overwhelming. 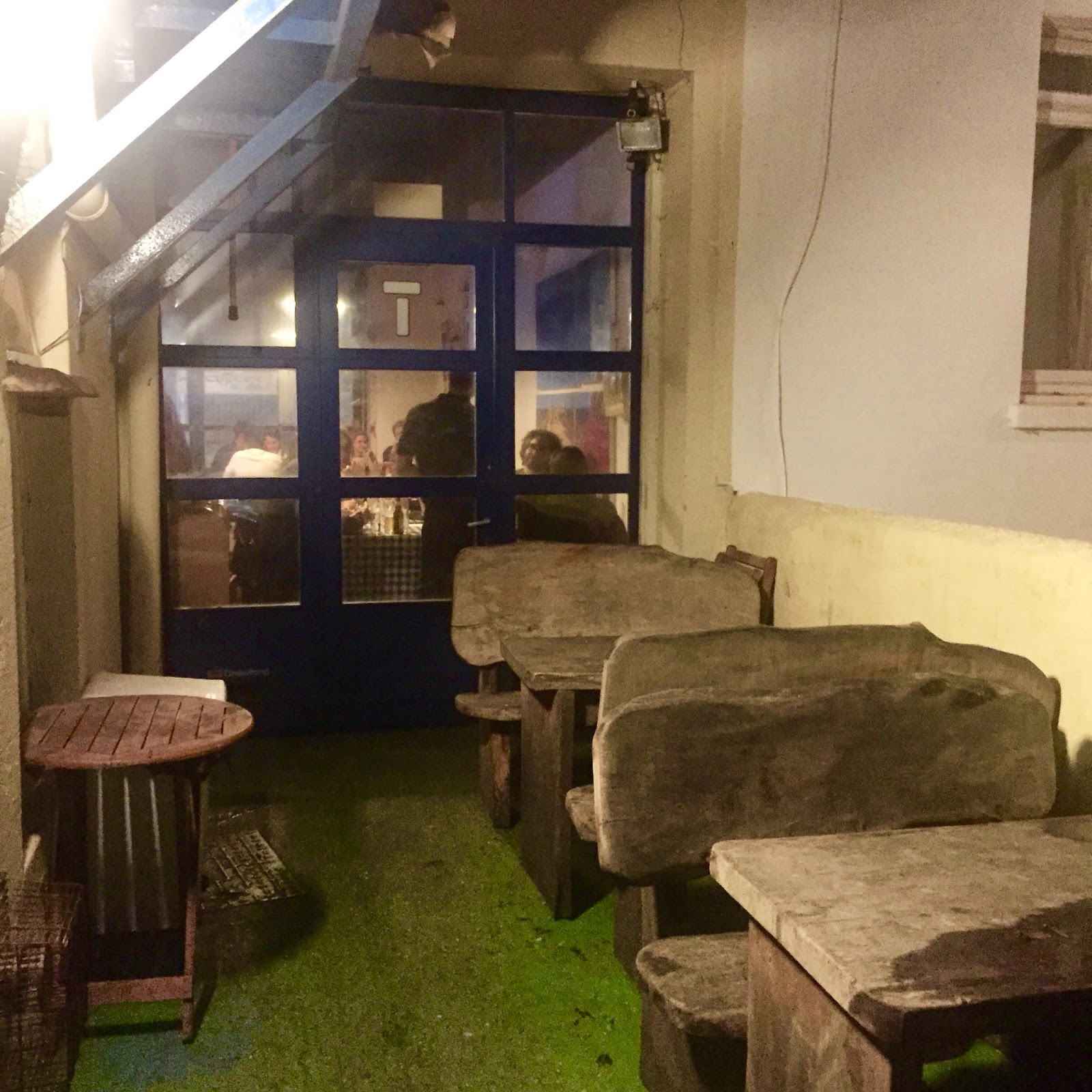 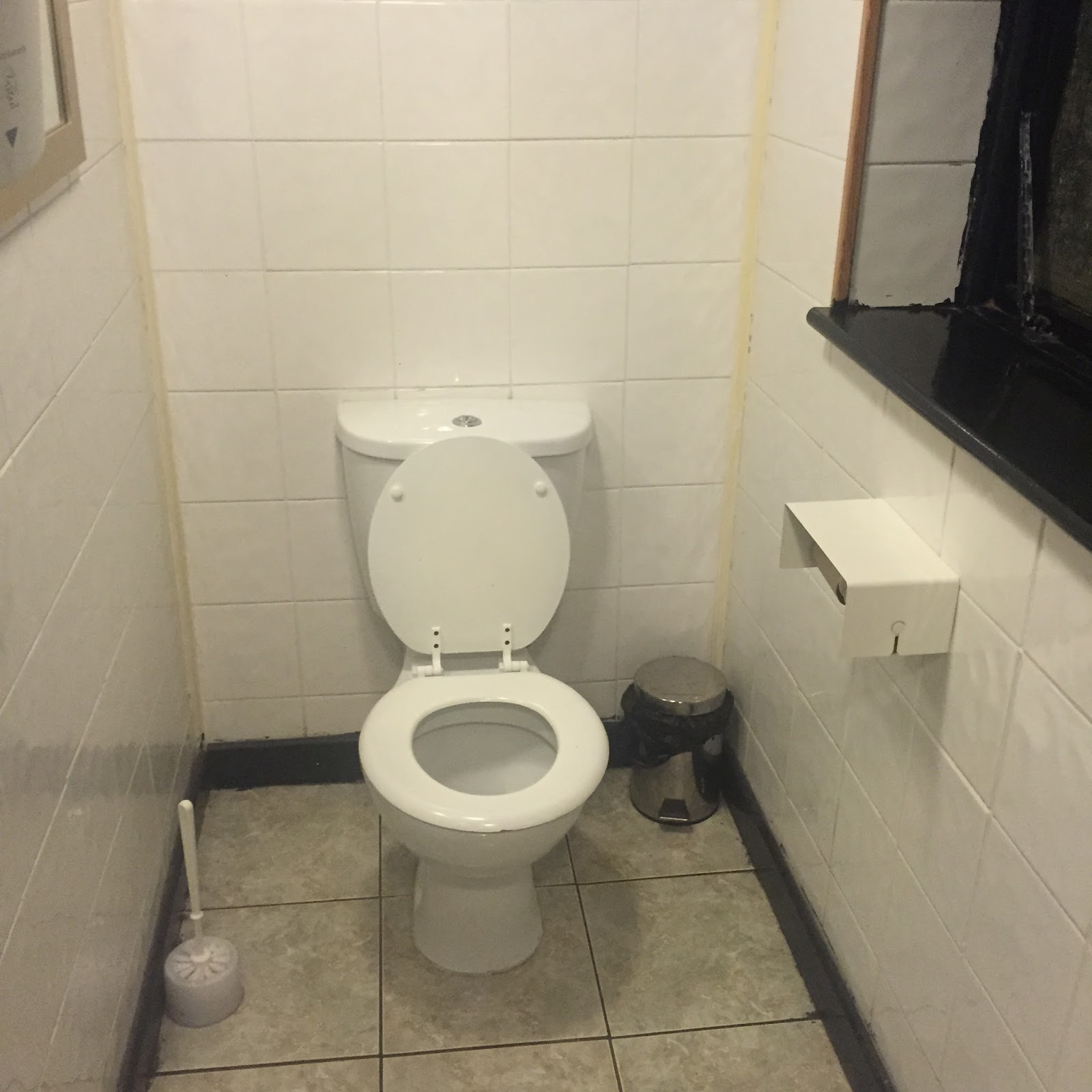 You have to make your way through the cute little courtyard out back, to get to the loo. Basic and very clean, but loses a point for the brush (pet hate). All fine though. 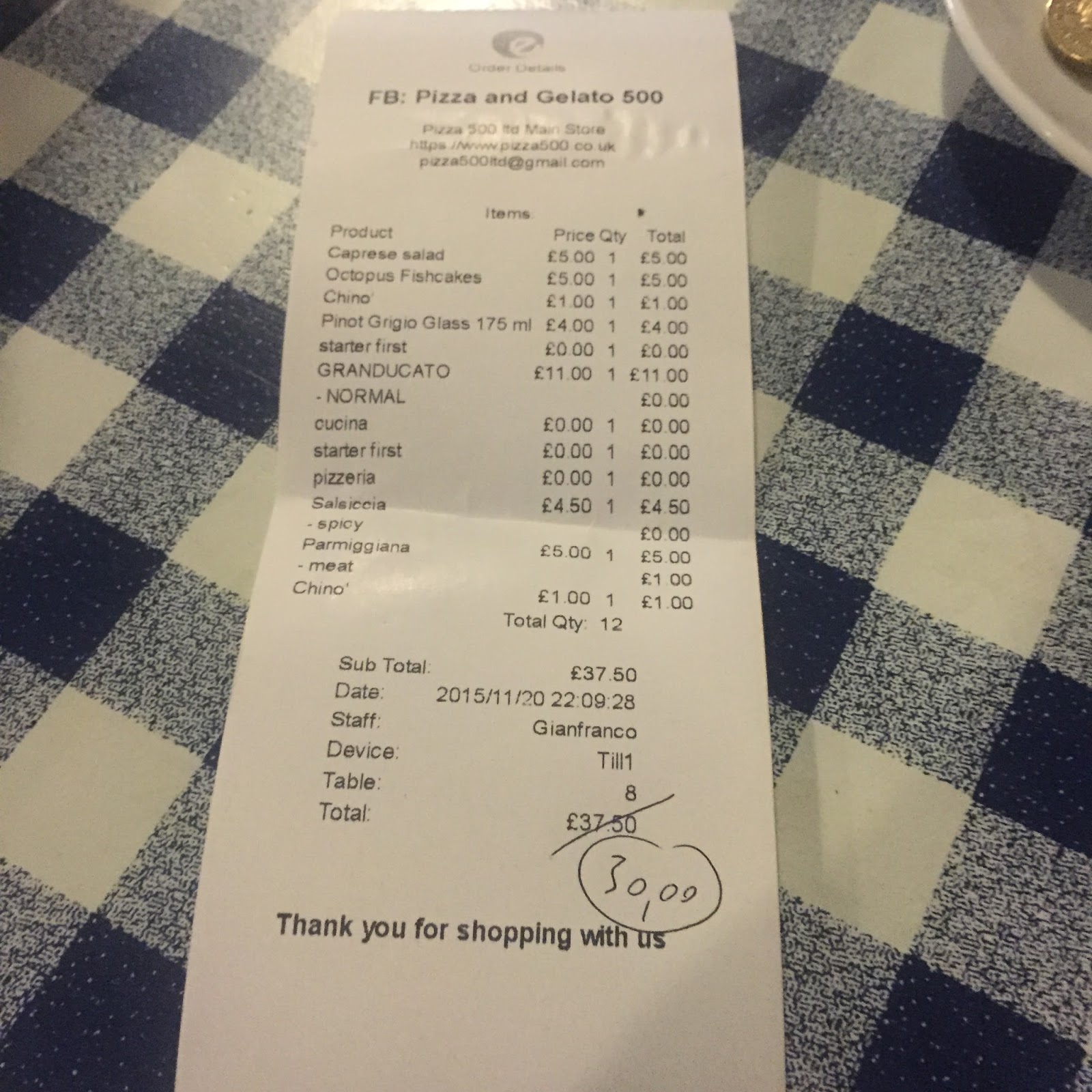 Full disclosure, they gave us our desserts for free as well as a £7.50 discount, which was very lovely, and very naughty of them- but appreciated.

It’s pretty obvious from the above, that I loved it all.  It feels friendly, authentic and bustling, with a steady stream of customers turning the tables over more than once, while we were there.  I’ll go out on a limb and say that I think this is the best Italian restaurant I’ve been to in Brighton, easily. The menu, the food itself, the ambience and the service are all spot on.

Have you been to Pizza 500?  Where do you like to eat Italian food in Brighton? Comment below or hit me up on all manner of social networks (links above and below).