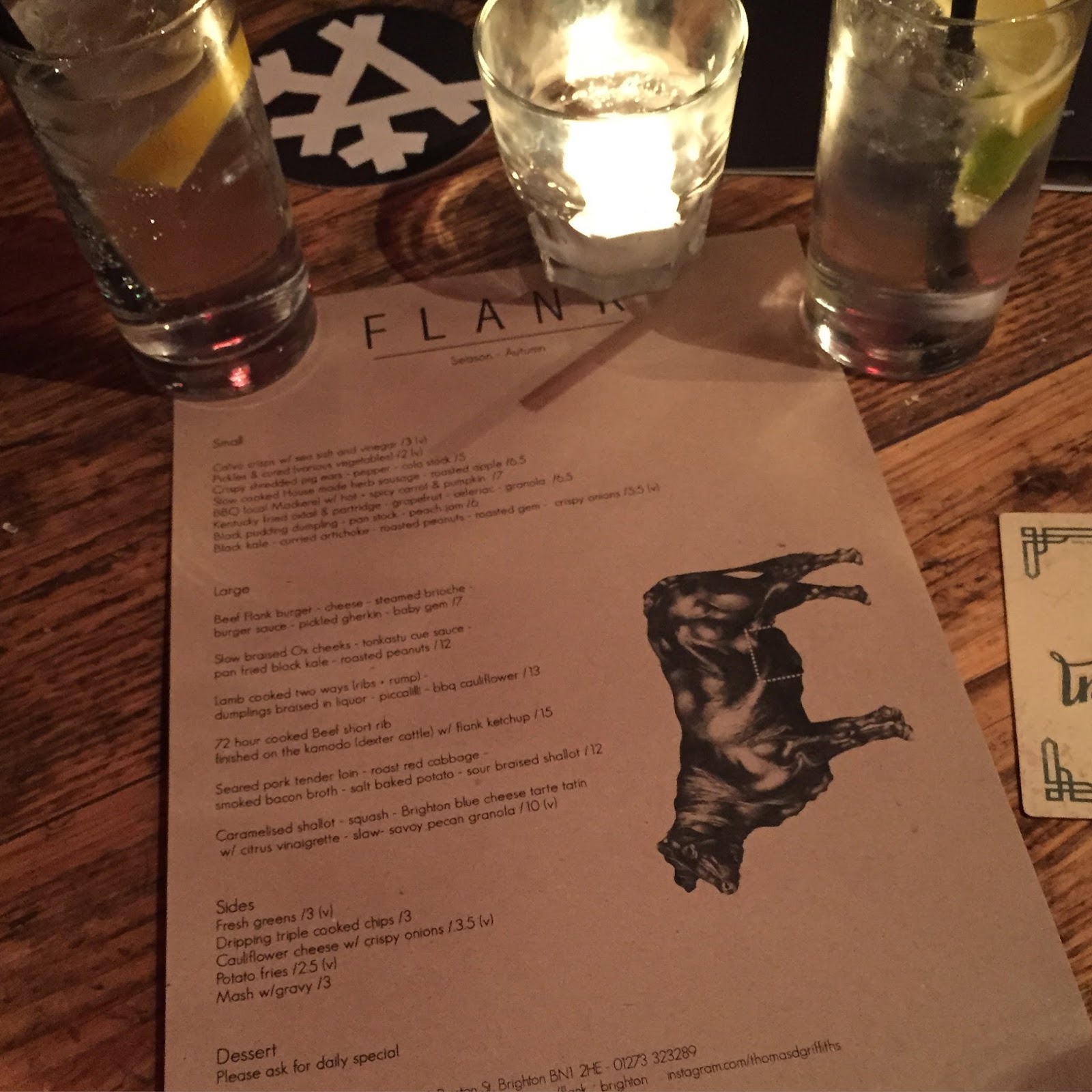 After being ‘the land that time forgot’ for many years, Preston Street has been really upping its game food-wise in the last year or so, and Autumn 2015 saw Brighton chef Tom Griffiths, set up his first solo venture, Flank, in the kitchen of the Royal Sovereign <<<< Flank can now be found at ‘The Cow’ in Seven Dials, Brighton.

I’ve eaten a lot of Tom’s food, in his previous home at the The New Club, so I was very curious to try out his ‘nose to tail’ menu. I’m not a massive one for ‘concept’ dining, but this is an ethos that I can very much get behind, and the passion and enthusiasm Tom has for it is plain to see.

I really like the pub itself and have spent quite a few cosy (boozy) afternoons in there, but, I will echo the words of my good friend The Graphic Foodie, who in her (rave) review said that the location slightly jars her – I agree.

The menu is interesting and reads well, but for me, it would be far more suited to a standalone restaurant, where the food is the main event and the intricate cooking methods would be truly acknowledged, and appreciated. I’m sure there are plans for this afoot though. 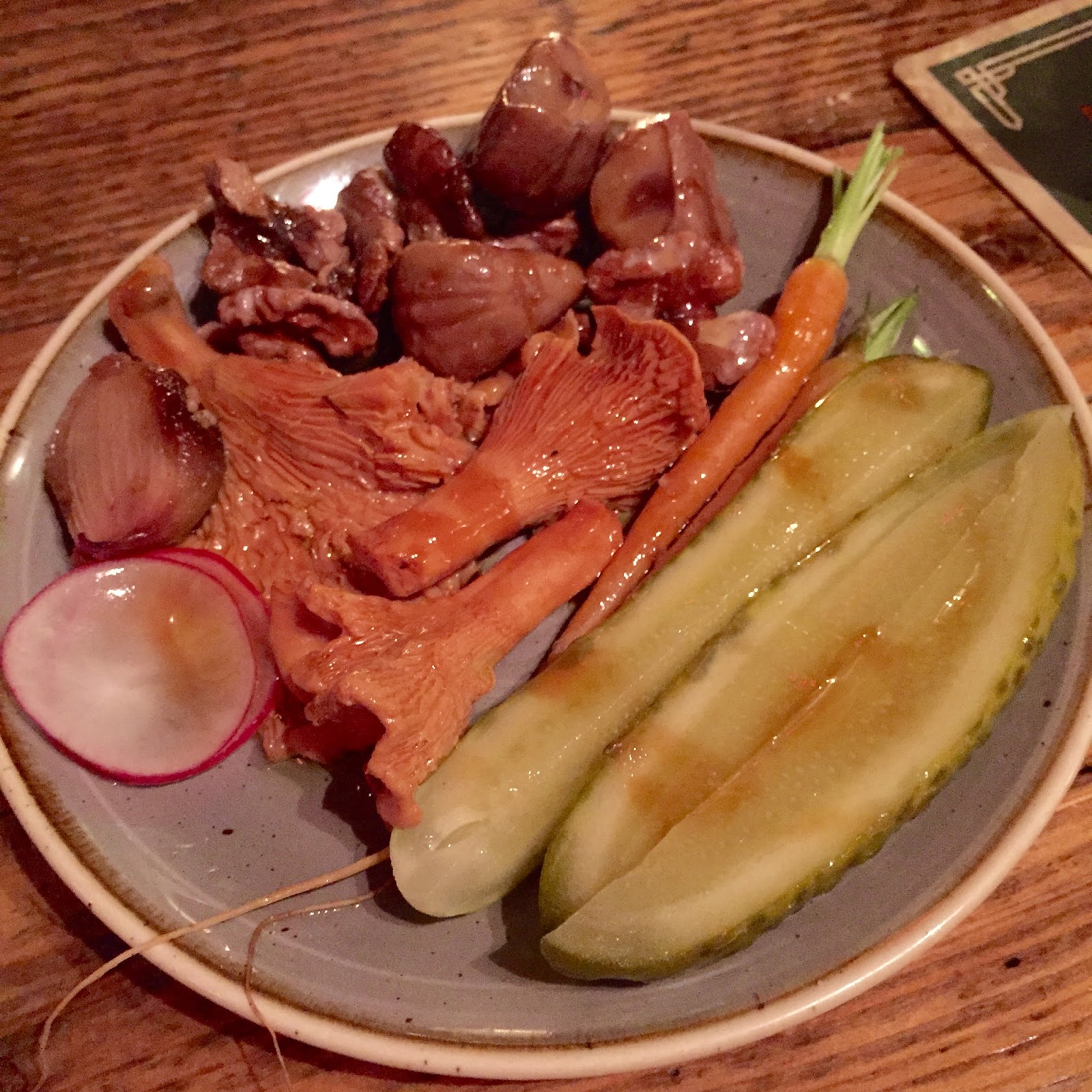 When I was little my Mum would ask my Dad how his supper was and sometimes he would reply saying ‘absolutely lovely but I never want to eat it again’ – after eating those pickled mushrooms I can totally relate to that statement. I did enjoy the rest though, particularly the carrots. 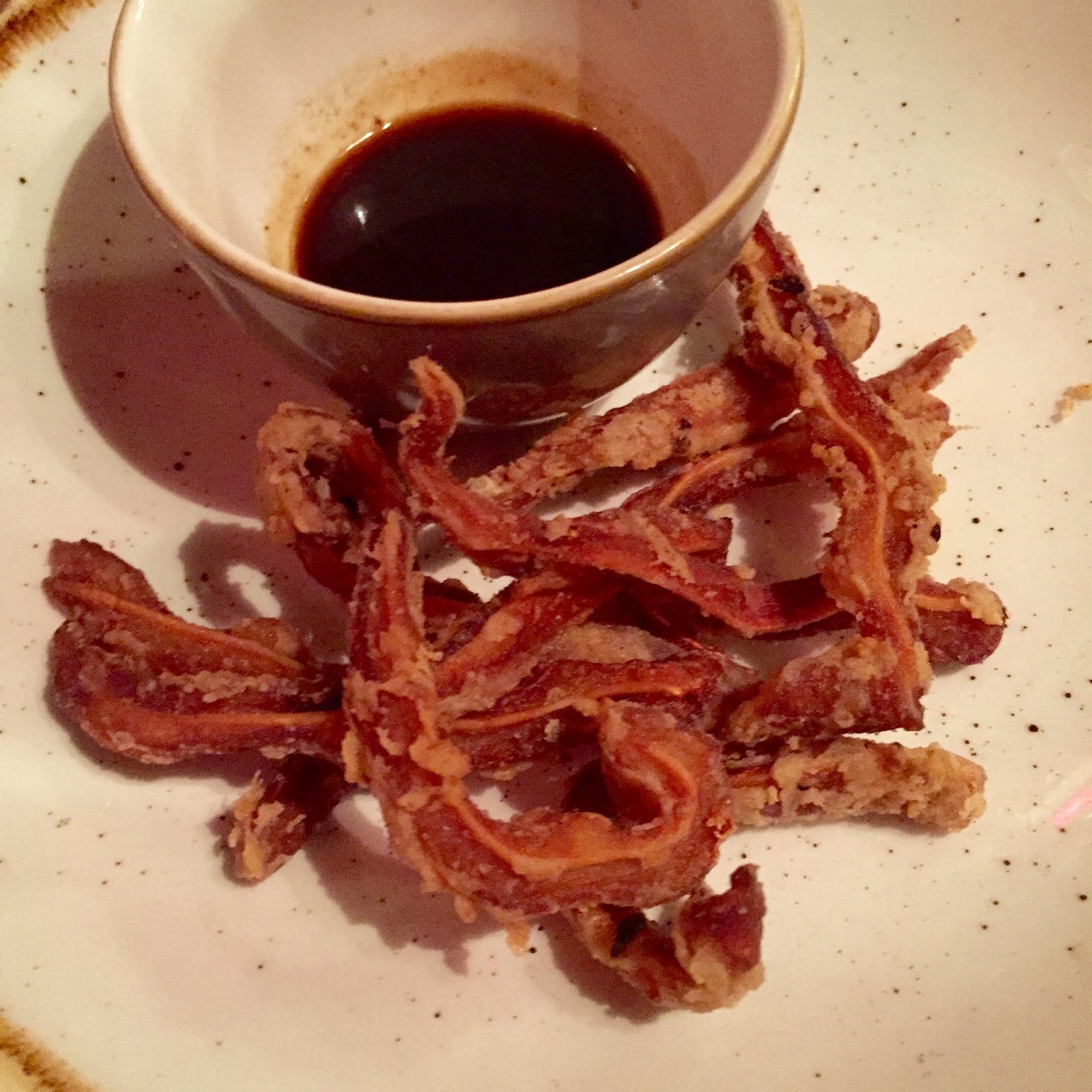 I’ve eaten pigs ears a few times recently, and I can say without a shadow of a doubt these were some of the best ever. They were crisp, salty, moreish, and the cola stock served on the side had a tang to it that was not at all dissimilar to ponzu sauce.

I really did enjoy them, but I do feel that a fiver was a bit steep for the amount we got, and I should imagine someone ordering them as a bar snack might have thought so too. 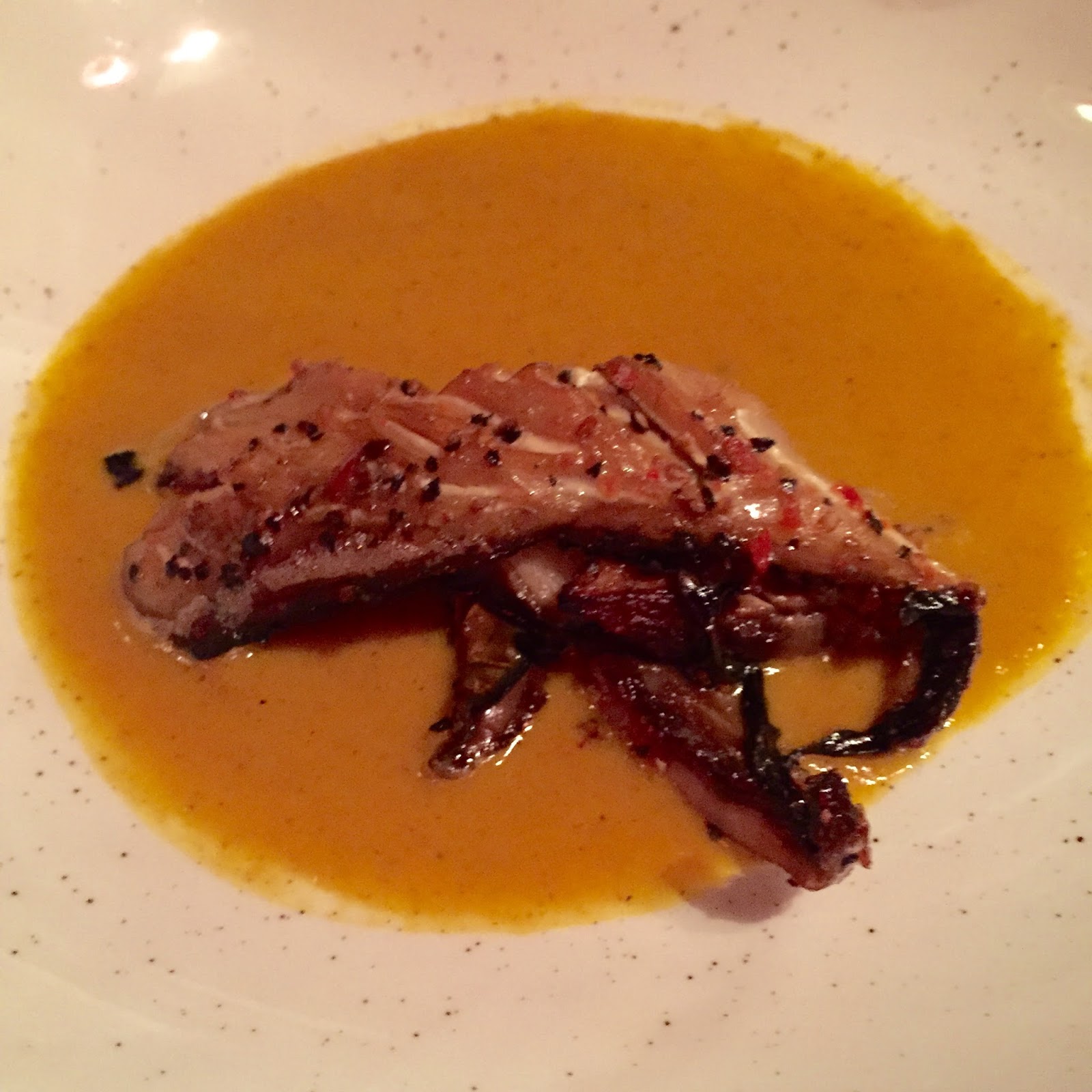 We both loved the pumpkin and carrot puree that came with the mackerel, but the main event itself was a bit of a let down if I’m honest.

I’m not generally one to complain about the price of food, but… I would expect a fillet for £7 and what we were served was reminiscent of the vacumn-packed smoked kind you get from the supermarket, it was alright, but definitely not worth its exorbitant price tag. 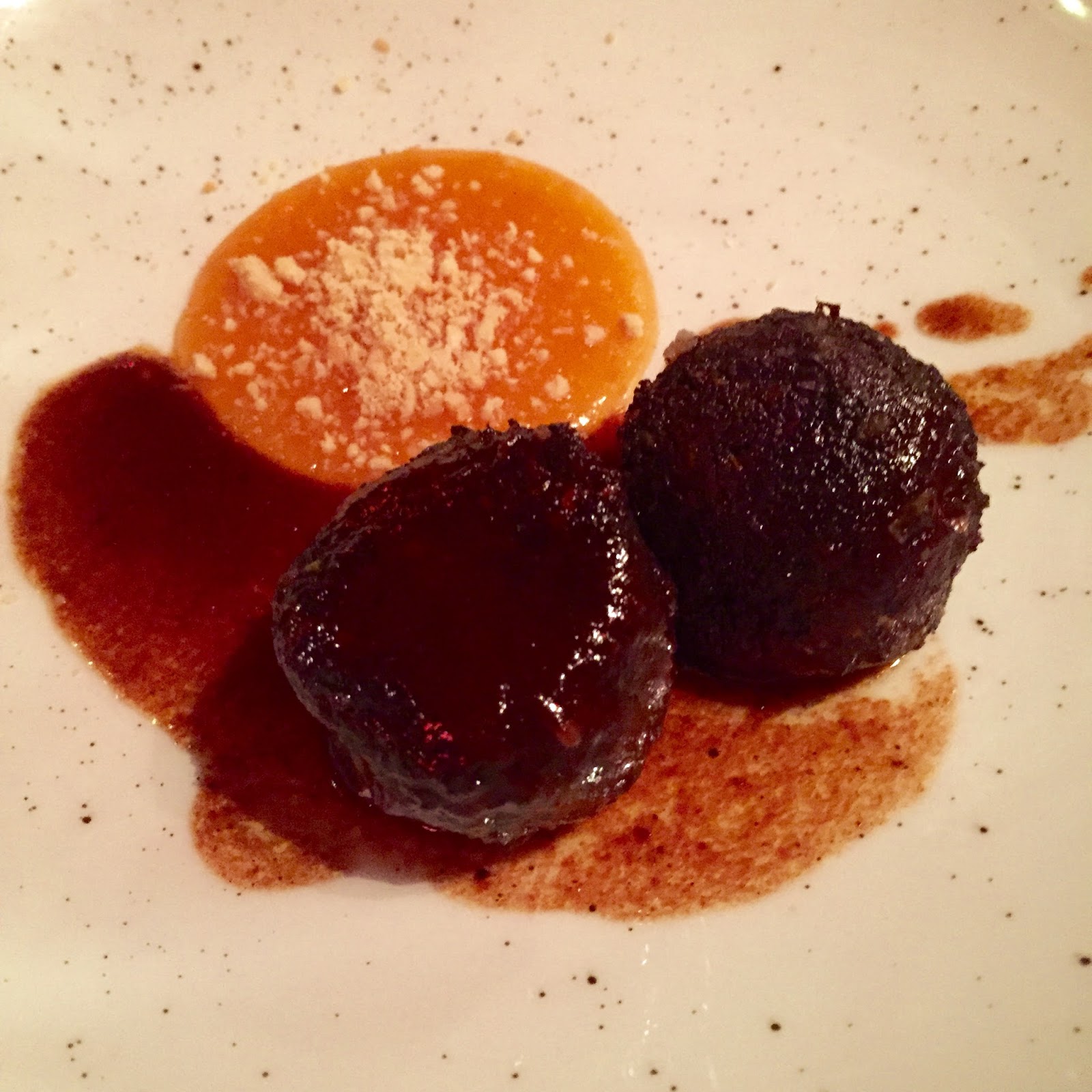 These were a real highlight for both of us. I am a big fan of black pudding, in any guise, but this had been made on the premises and had a hint of chopped nuts running through as well, which gave a pleasing crunch to the otherwise meltingly delicious dumplings. Big thumbs up. 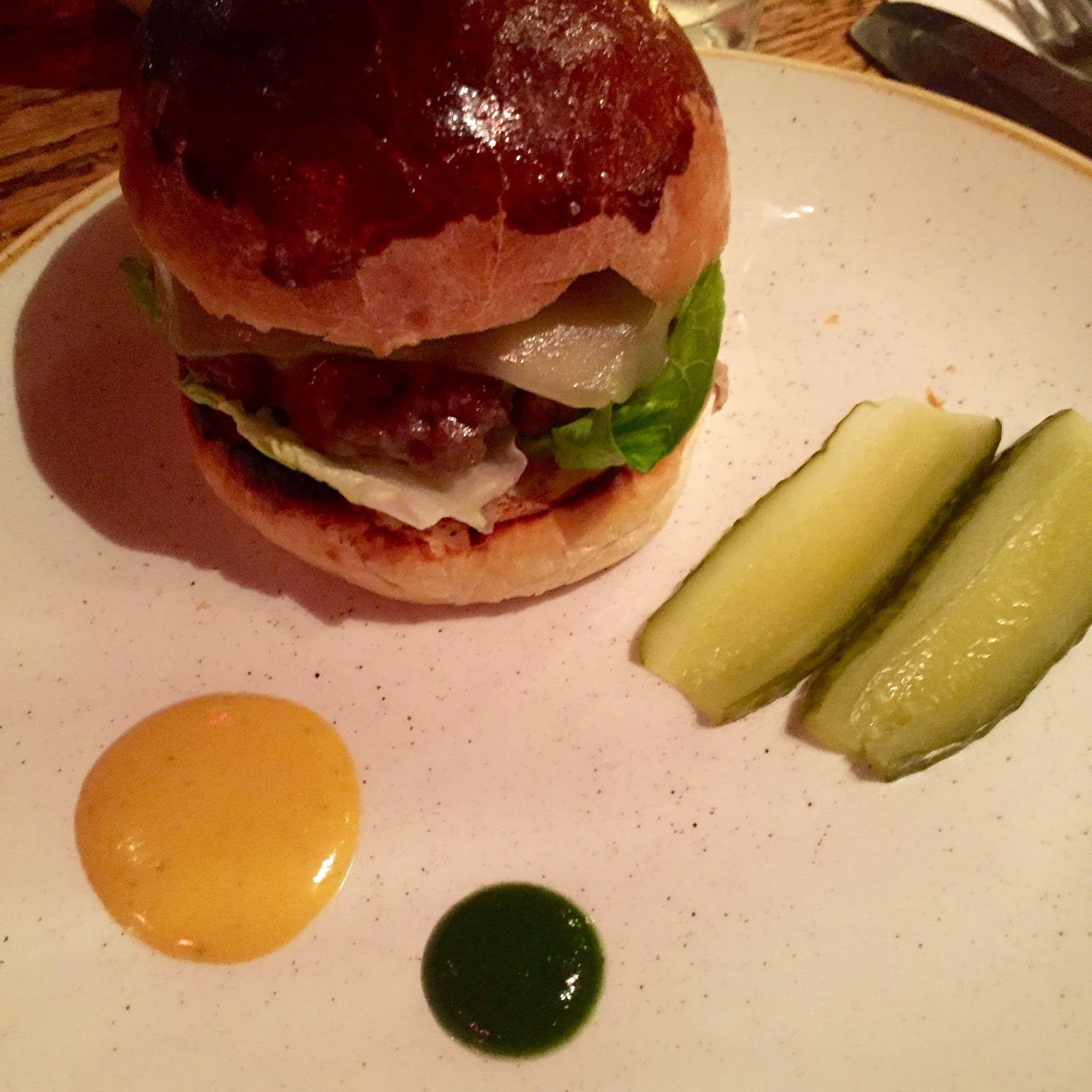 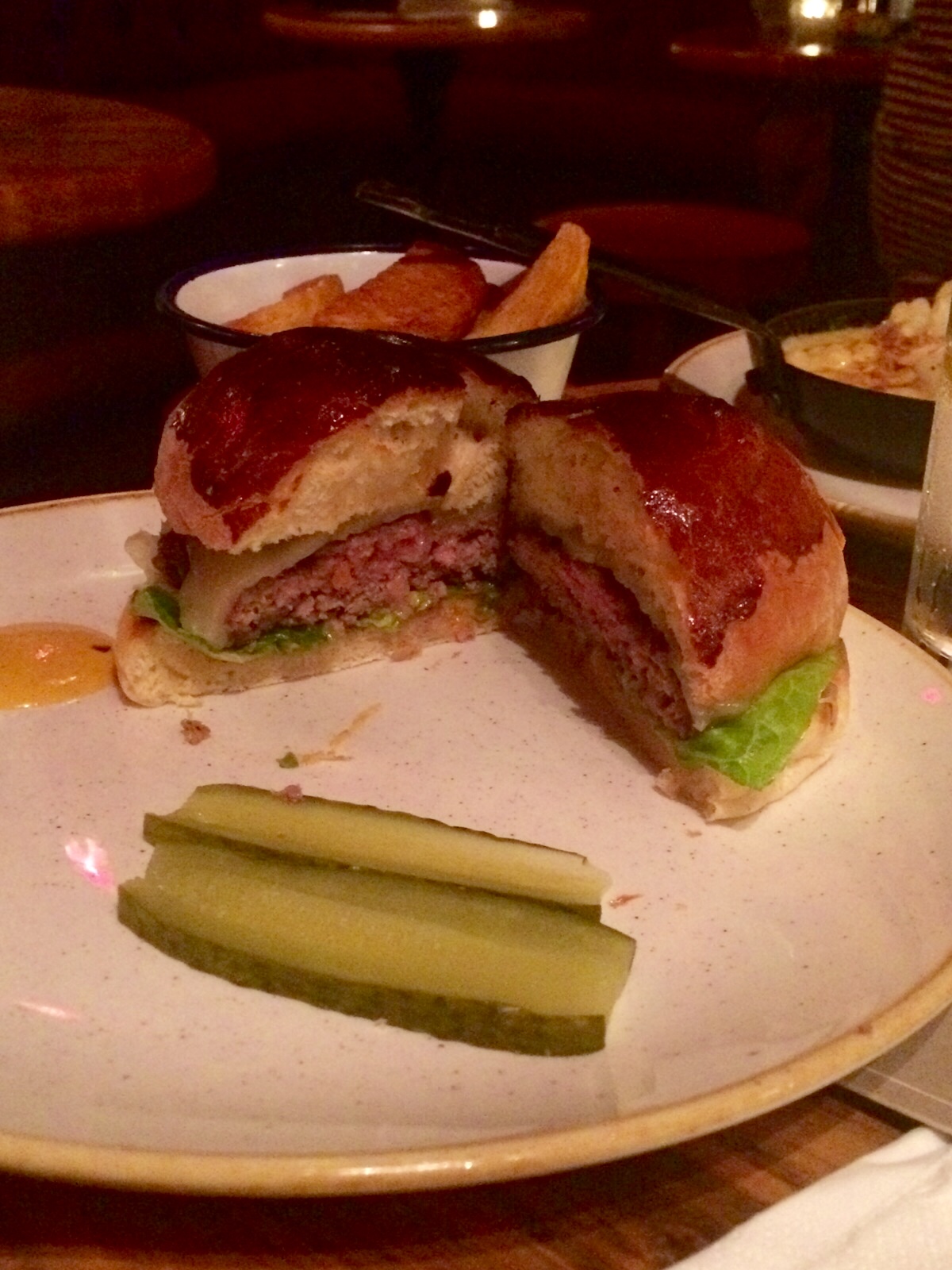 Loved this. The patty, which was made from flank, bavette and cheek, was housed in a sturdy, steamed brioche bun which actually held its own until the last bite,  rather than giving way under the stream of juices coursing from the burger. Not a massive fan of plate splodges, especially not in pubs, but the burger sauce was delicious and therefore not unwelcome, on this occasion.

I probably should’ve gone for one of the more adventurous menu items, but I don’t regret my choice at all, there’s a lot of strong burger offerings in Brighton and this was definitely up there with some of the greats, in terms of flavour. 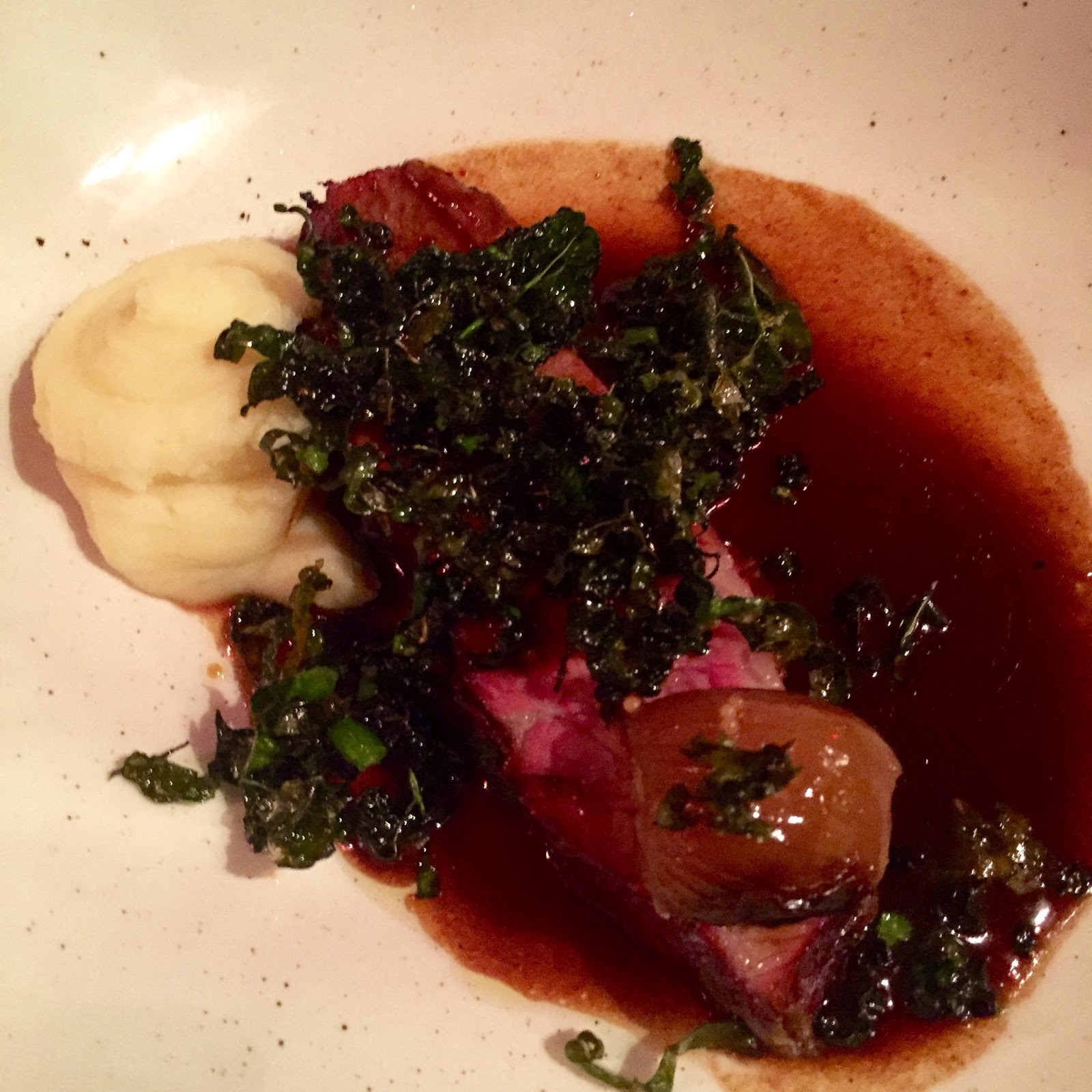 This was something that was brought out as an extra for us to try. The meat had been cooked for 72 hours and was tender, but definitely not at the point of collapse as you might expect for such an extensive cooking time. I didn’t actually catch what the sauce it came with was, but coupled with the ‘crispy seaweed’ style greens, it reminded both of us of something you would get from a (very good) Chinese takeaway. Possibly not what had been intended when devising the dish, but nice all the same. Great mash too. 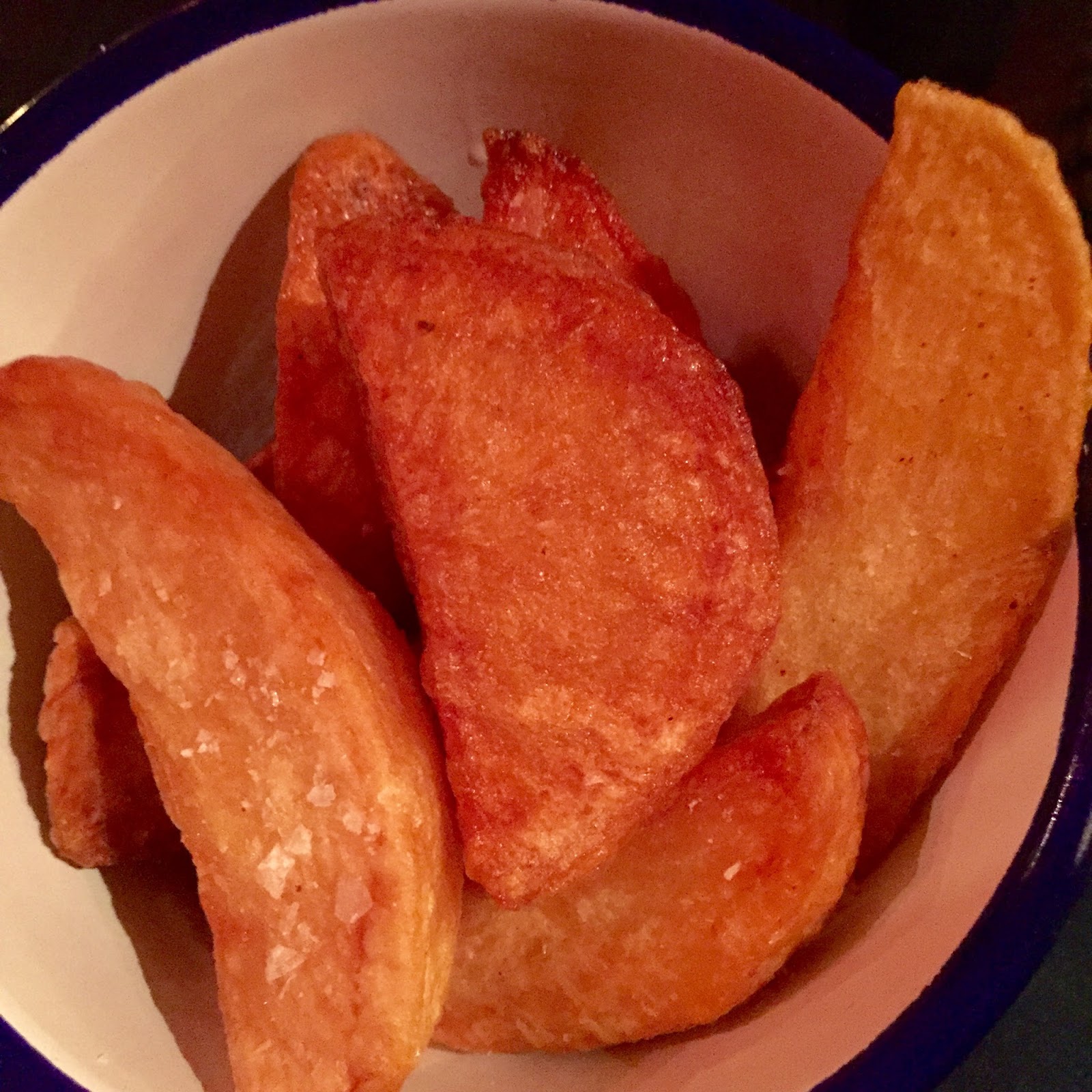 I would’ve been surprised if triple cooked chips hadn’t featured on the menu, they are a mega crowd pleaser and just what you want as a bedfellow for all of the nose to tail action on offer.

In truth some were a little on the large side meaning that although they were crispy, the large amount of ‘innard’ definitely took the edge off it. Cut just a bit smaller then they’d have been perfect. 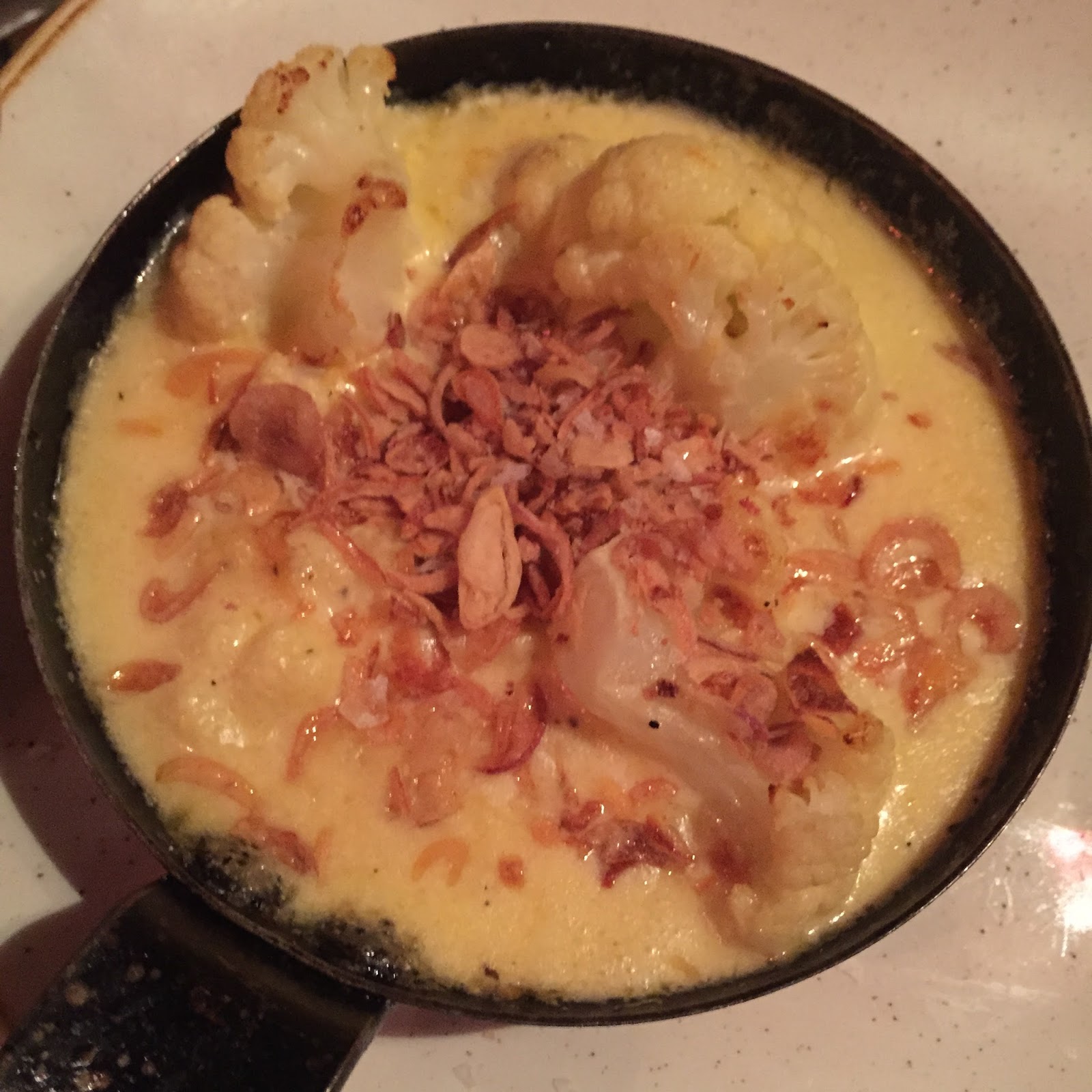 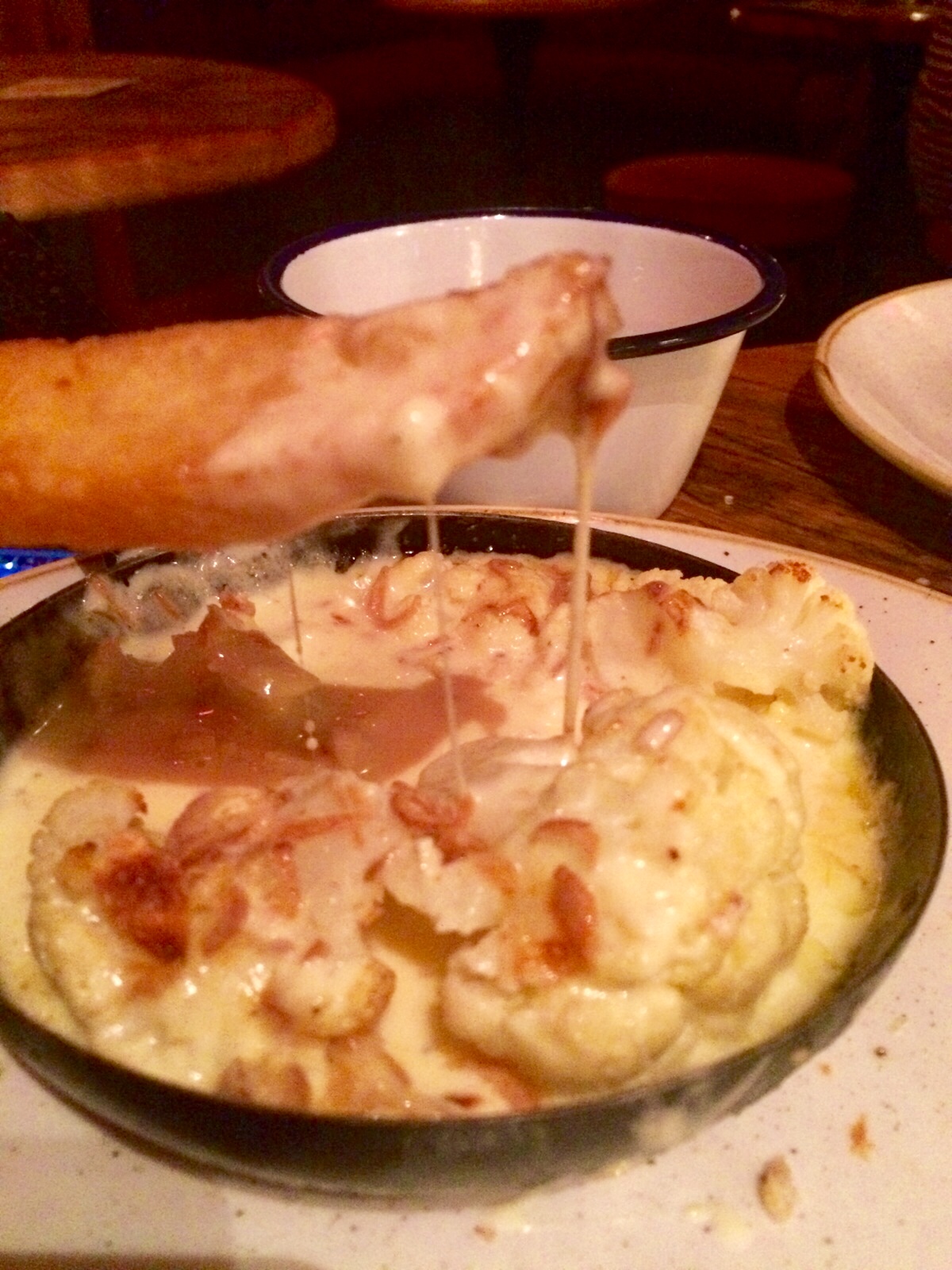 I am a long term fan of Tom’s macaroni cheese skillz and these translated perfectly his deliciously luxurious version of cauliflower cheese. That sauce was made for dipping. 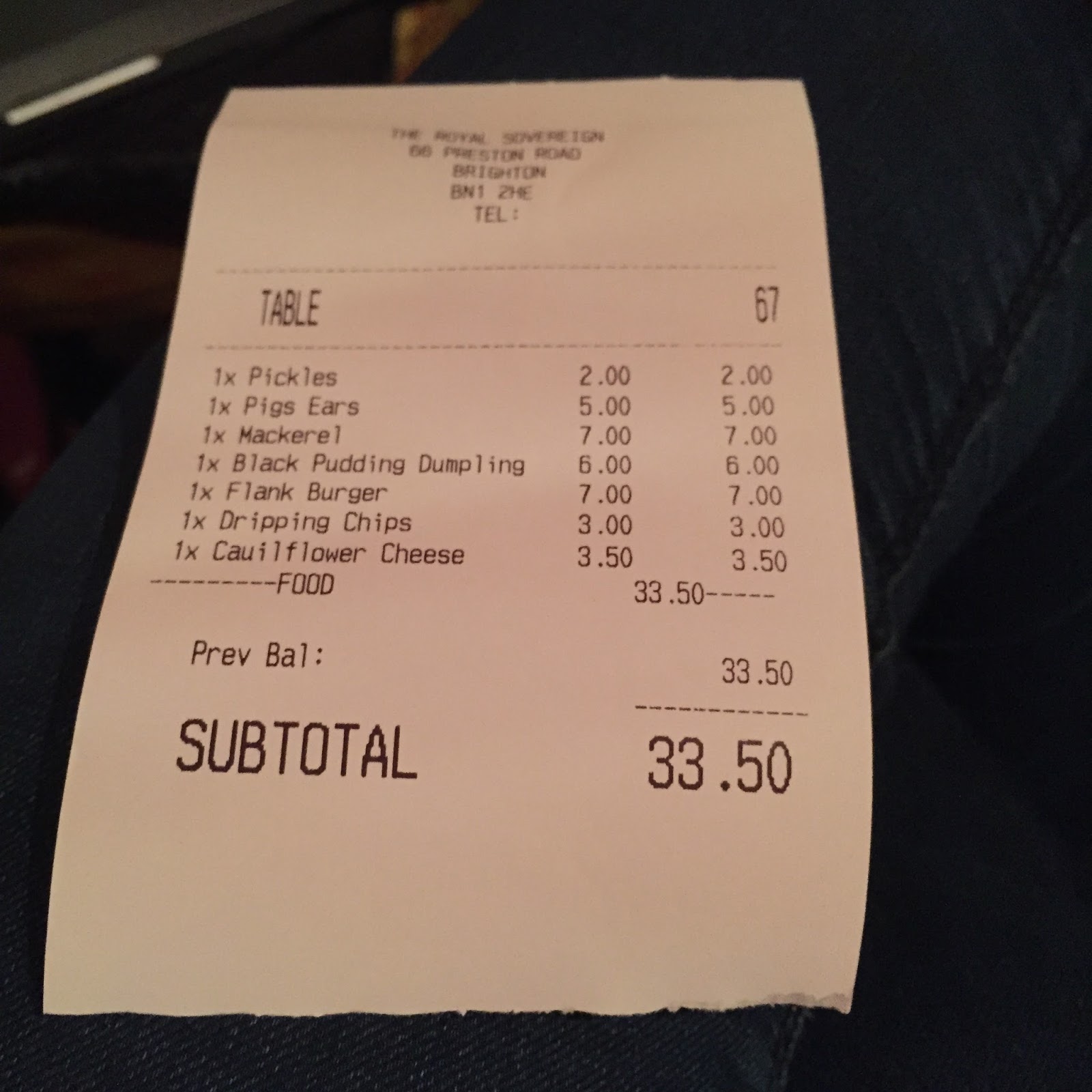 Despite my earlier griping re a couple of the prices, the bill was pretty much what you’d expect and for £17 I felt well fed and satisfied.

This style of menu is served Tues-Sat and roasts on a Sunday – Keep reading for the low down on those! 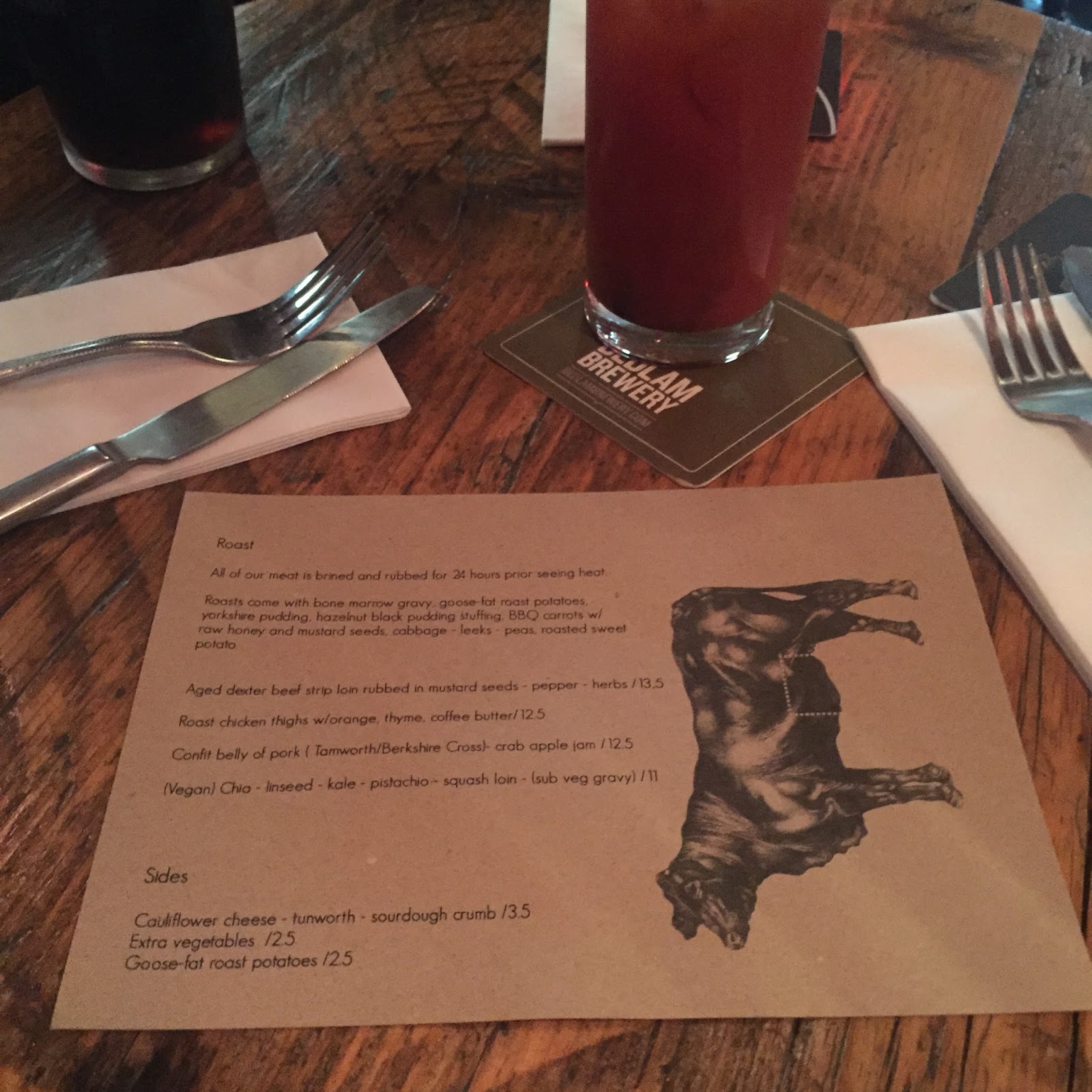 Now that  is a good looking roast menu. Black pudding stuffing, all my favourite veg and more of that glorious cauliflower cheese you say? Yes please. 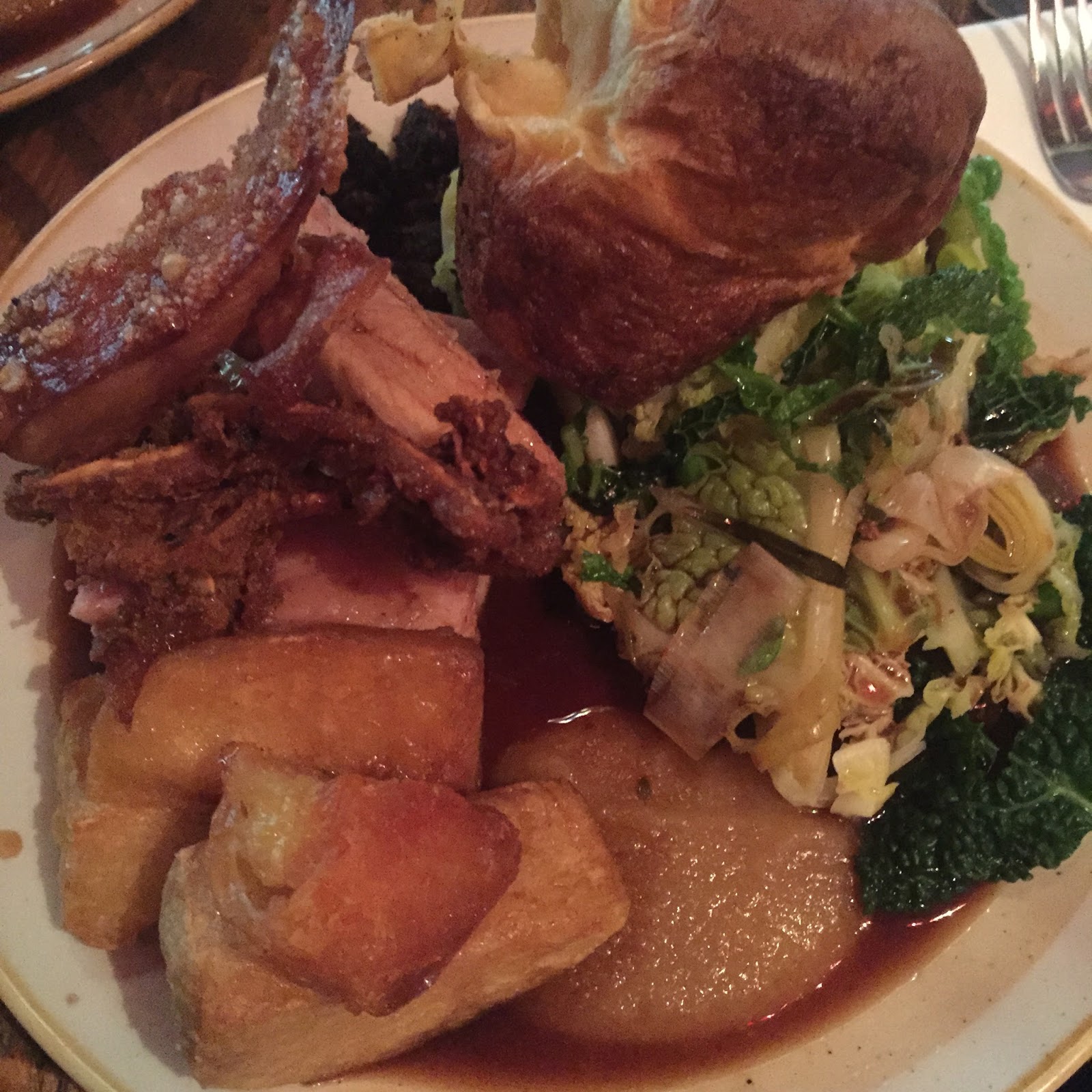 Absolutely picture perfect and tasted as good as it looked. The meat yielded with the slightest nudge of my fork, whilst the crackling was the kind that makes you forget your manners and pick it up to give it a good chew. The yorkie was a monster, the roast potatoes were some of the best I’ve had in a pub, and the bone marrow gravy was everything you could want it to be. In short, they have nailed the Sunday roasts.

There was more of that cauliflower cheese again too, it’s just not pictured. 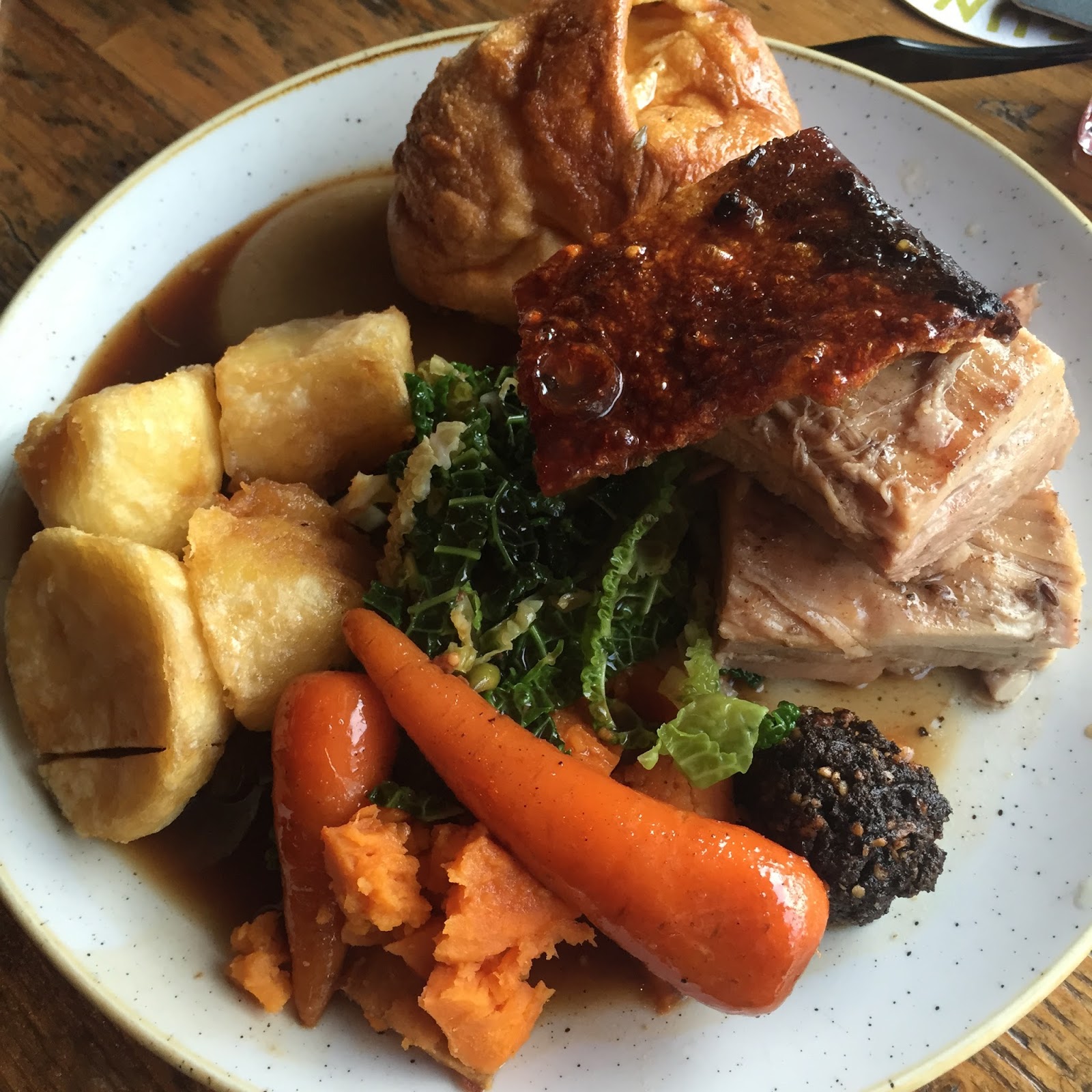 So impressed was I with the roast I went back two weeks later, much later in the day, at the tail end of them being slammed during a busy lunch service. But I’m happy to report that it was still fantastic. Serving a consistently good roast is something that seems to elude a lot of places in Brighton, but I know a lot of people who have tried, and rate, their roasts – and I think it’s worth £12.50 of anyone’s money.

In summary I would say that the food served at Flank is being shown some serious attention and care, and I like that a lot. There were elements of my meal I enjoyed enormously, some I just liked, and a couple of things I felt indifferent about. I definitely do want to go back again to try some more of their seasonally led menu, but the thing I will be hurrying back for is another of those roasts, and more of that incredible cauliflower cheese too…

Have you been to Flank? What did you think? Please do comment below or on any of my social networks (links below).