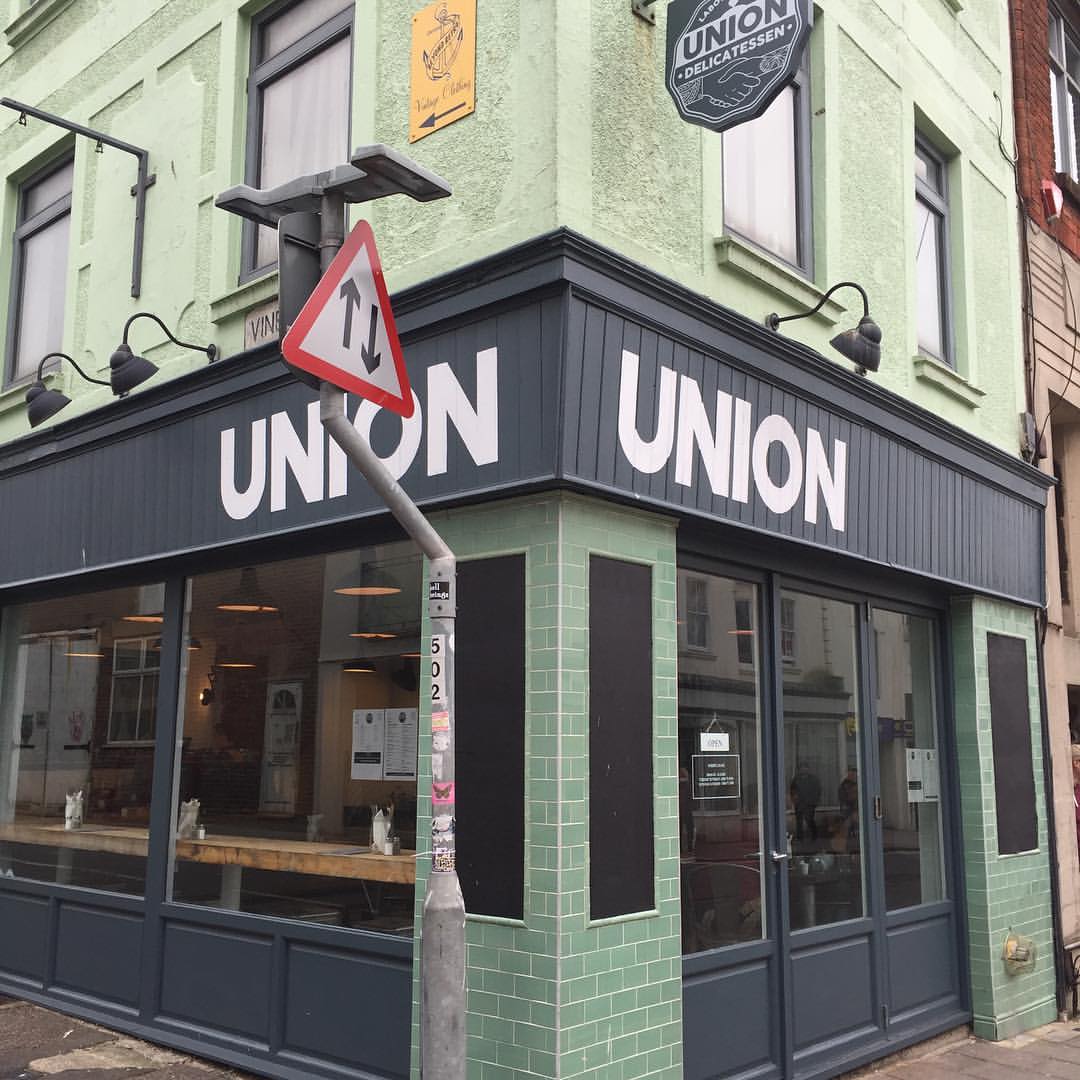 Almost all of my intel’ about new places to eat in Brighton, comes from my daily trawlings of social media, and my discovery of Union Delicatessen, on North Road, was another of these occasions.

With little to no fanfare (their own social is updated infrequently) Union opened its doors* on March 15th, slap bang in the middle of North Laine.  It’s a prime location which should easily reap the rewards of overflow customers unable to get seating at the consistently rammo, Bills – which is directly next door.

There’s some blurb on their website explaining their ethos and produce, but think American-style deli with Southern influences to the menu, with craft beer and sodas and that’s pretty much the gist.  They also talk a lot about it being a labour of love… I think, its heart is probably in the right place, but I’m not sure it’s quite delivering on its mission statement, just yet.

*I very rarely post about places shortly after they’ve opened, so to be fair, and I do try to be, I’ll preface this review by saying that some of my experience could be filed under ‘teething problems’. 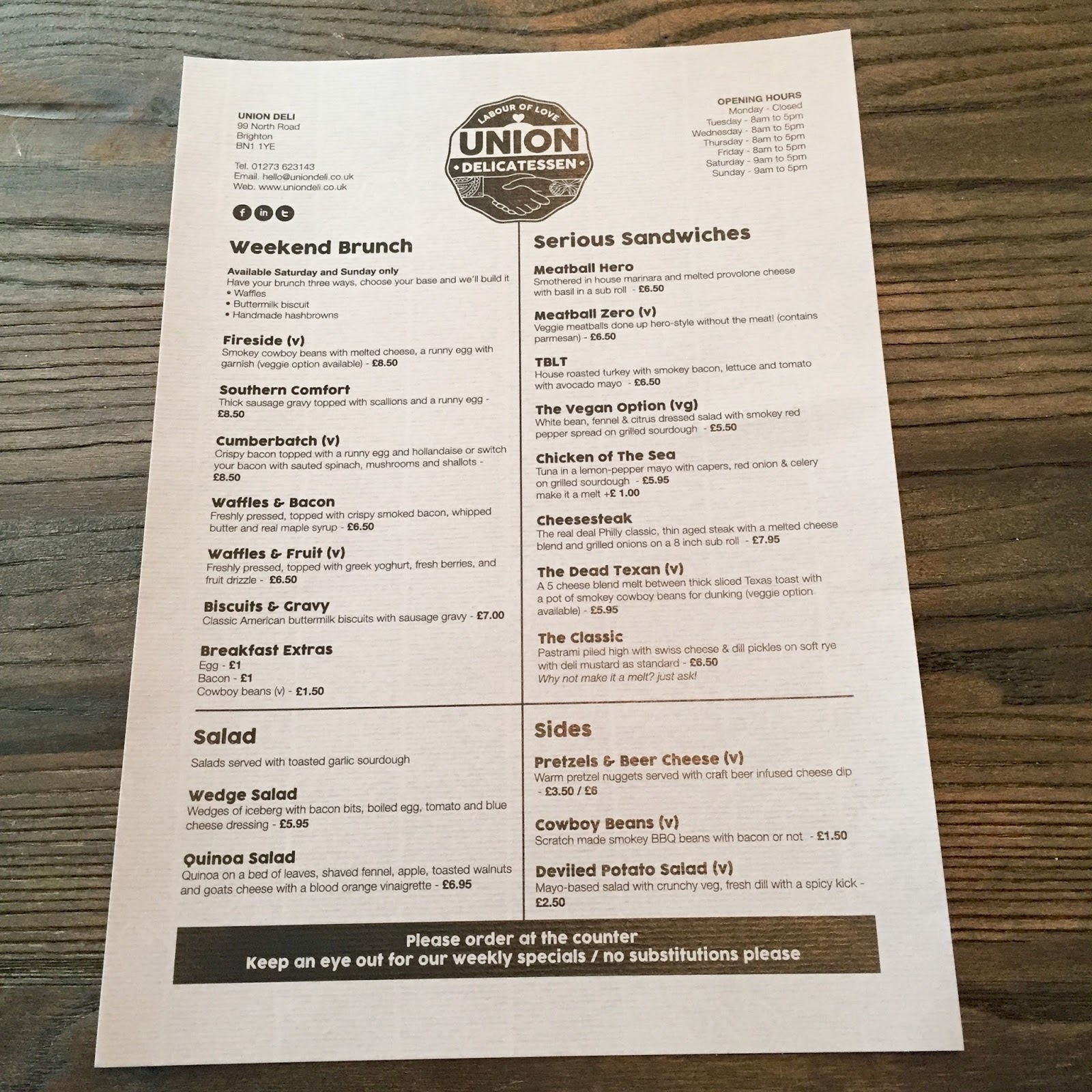 At a glance this is a good looking menu with lots of appealing dishes, something for everyone you might say. But, once you find out that brunch is only available on Saturday and Sunday (despite the fact they open at 8am on weekdays) and that you can’t order anything from the other three sections of the menu at the weekends (not mentioned anywhere), you’d be within your rights to feel slightly disappointed, I think. 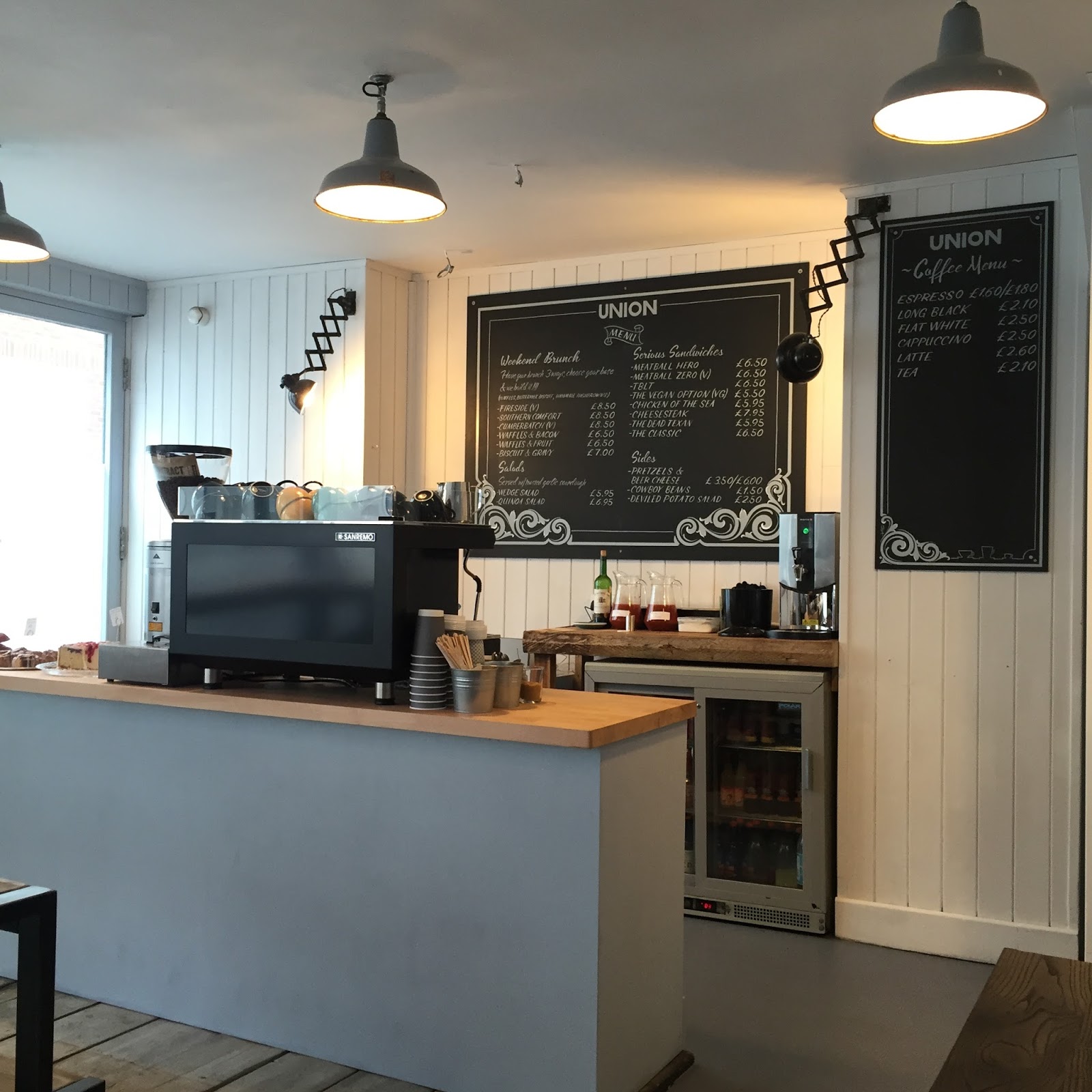 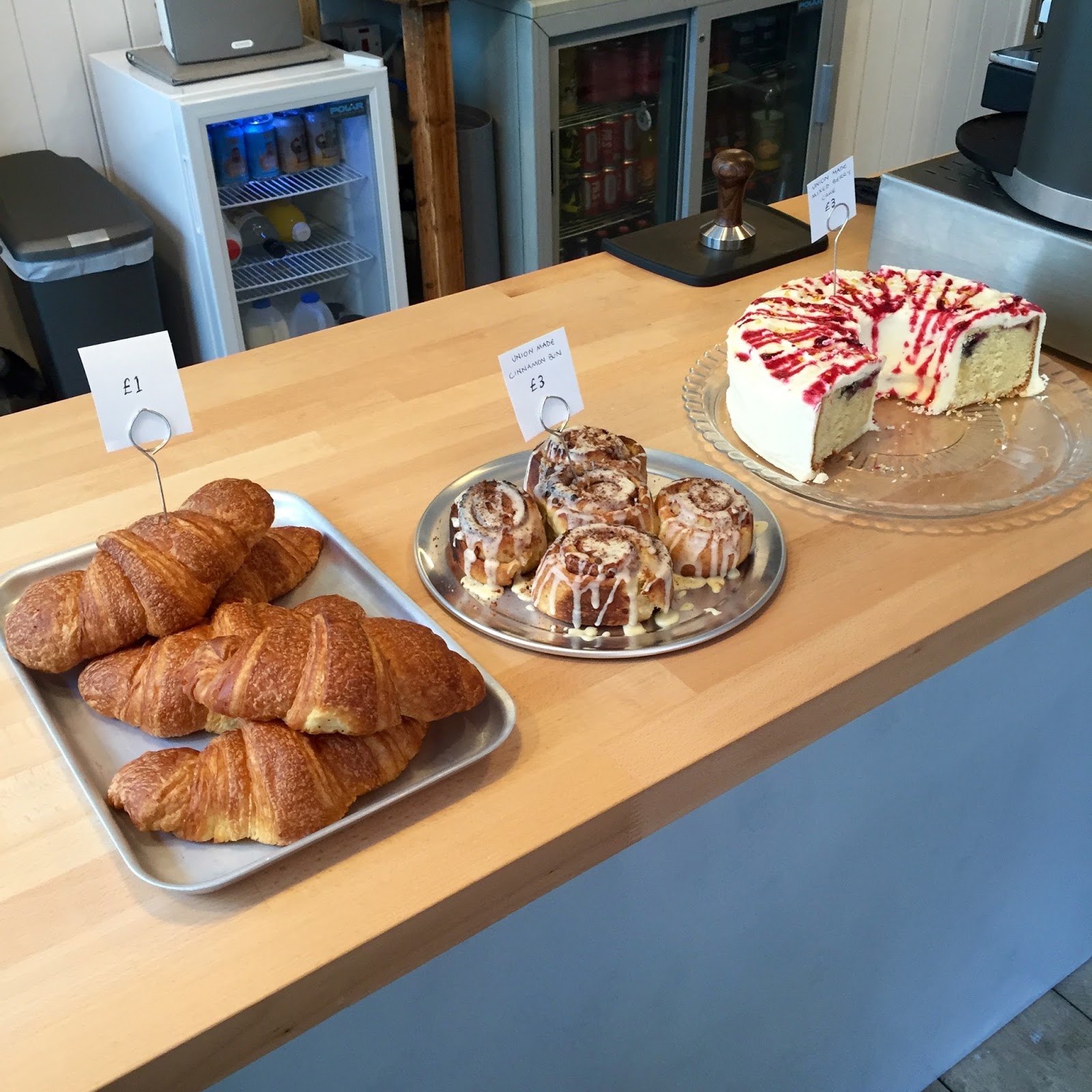 The early signs weren’t good.  The only other table in there left shortly after we arrived and no one else came in during the 45 minutes or so we were there. Given that it was 12:30 on the Saturday of Easter bank holiday weekend, that would have meant serious warning bells for me, had they not only been open a week.

We waited a good ten minutes or so for our order to be taken, whilst both members of staff waited expectantly by the till, it transpired, for us to come up and order. When we did, painful is probably the best way to describe it. We tried to order a ‘serious sandwich’ and it was only then that we were unapologetically informed that only the brunch menu was available. Oh.

The guy who took our order was quite sweet, it was just very clear he didn’t have the faintest idea what he was doing or how anything worked. Again, I totally get that they’ve only been open a week, but given how quiet it was, it seemed unlikely there hadn’t been an opportunity to give some sort of training. 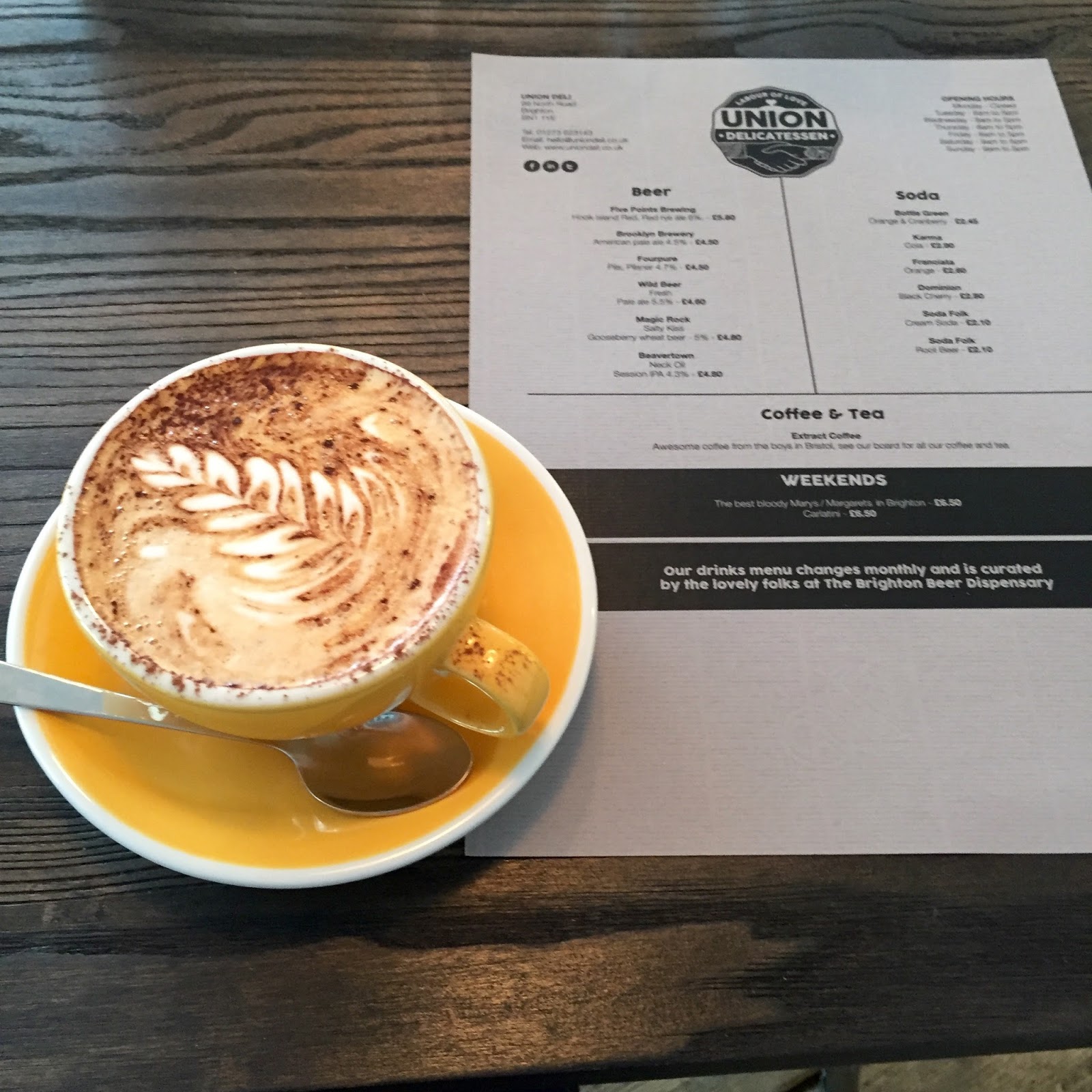 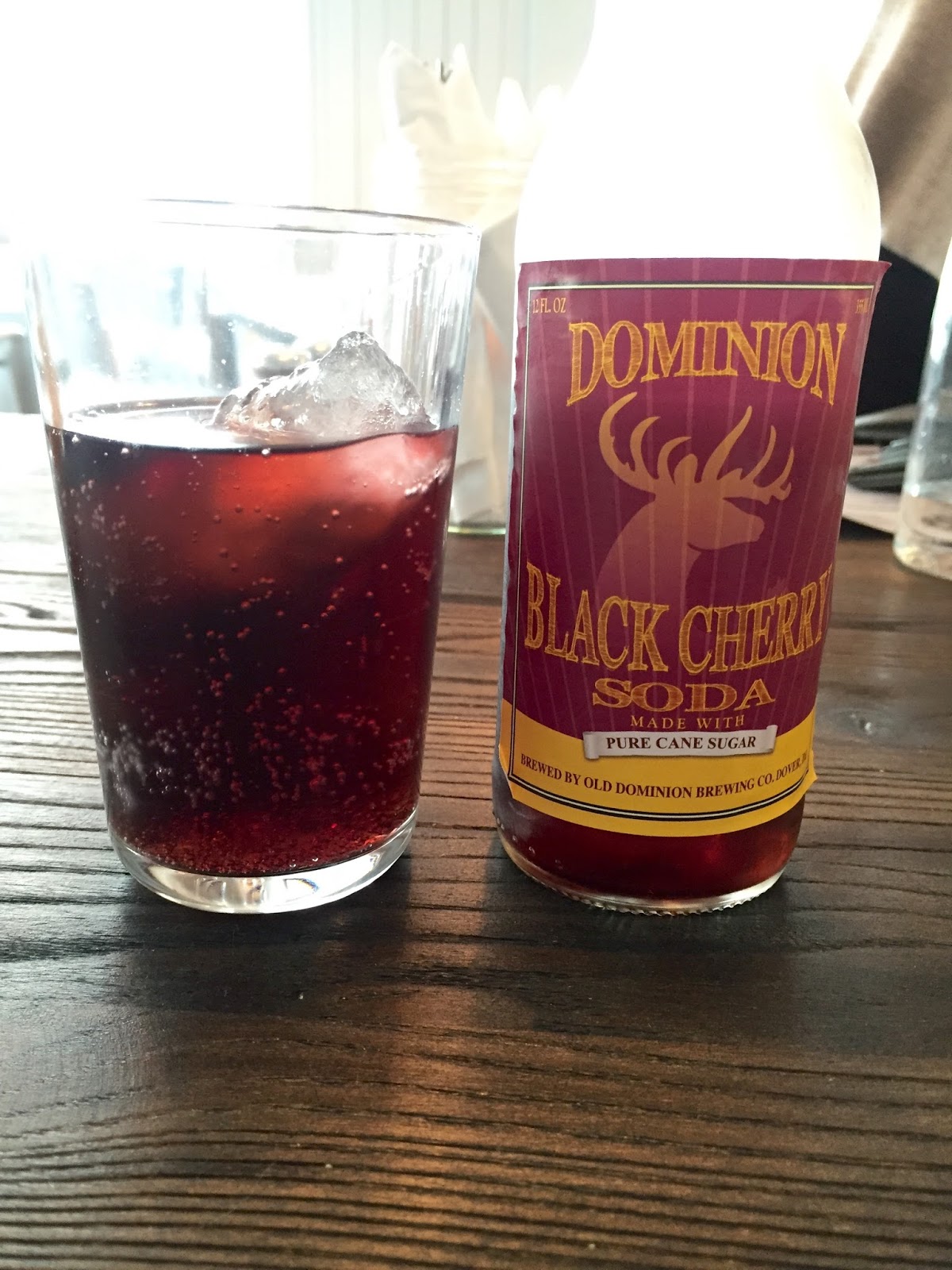 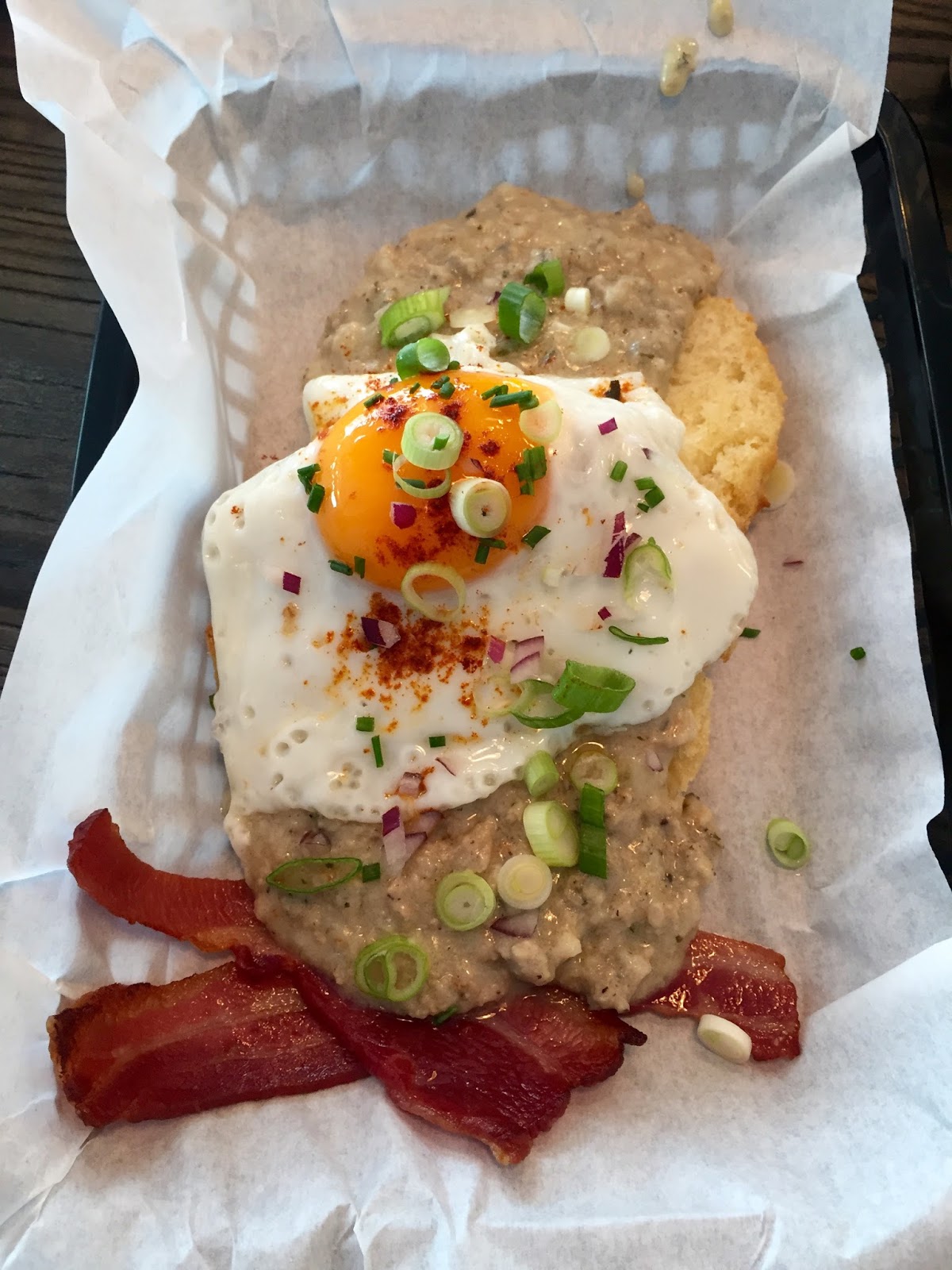 Those of you not well versed in Southern American food may well be recoiling in horror right now, but this is how it’s actually meant to look. I think they’d do themselves a favour if they referred to it as ‘creamy sausage gravy’ though, as people might be less surprised when they’re served something that looks a bit like regurgitated mushroom soup.

Appearance aside there were in fact positives about this – the gravy was in actual fact well seasoned and tasted good, even if it wasn’t piping hot. The buttermilk biscuit, was the standout element – like a plain scone, fresh from the oven, and the egg was well cooked.

Downers included bacon that tasted as though it’d been cooked hours before and then reheated (the speed at which it arrived seemed to back this up) and serving it on paper, really? I ate it all (including some paper) and I kind of enjoyed it, I just think it could’ve been better, and warmer. 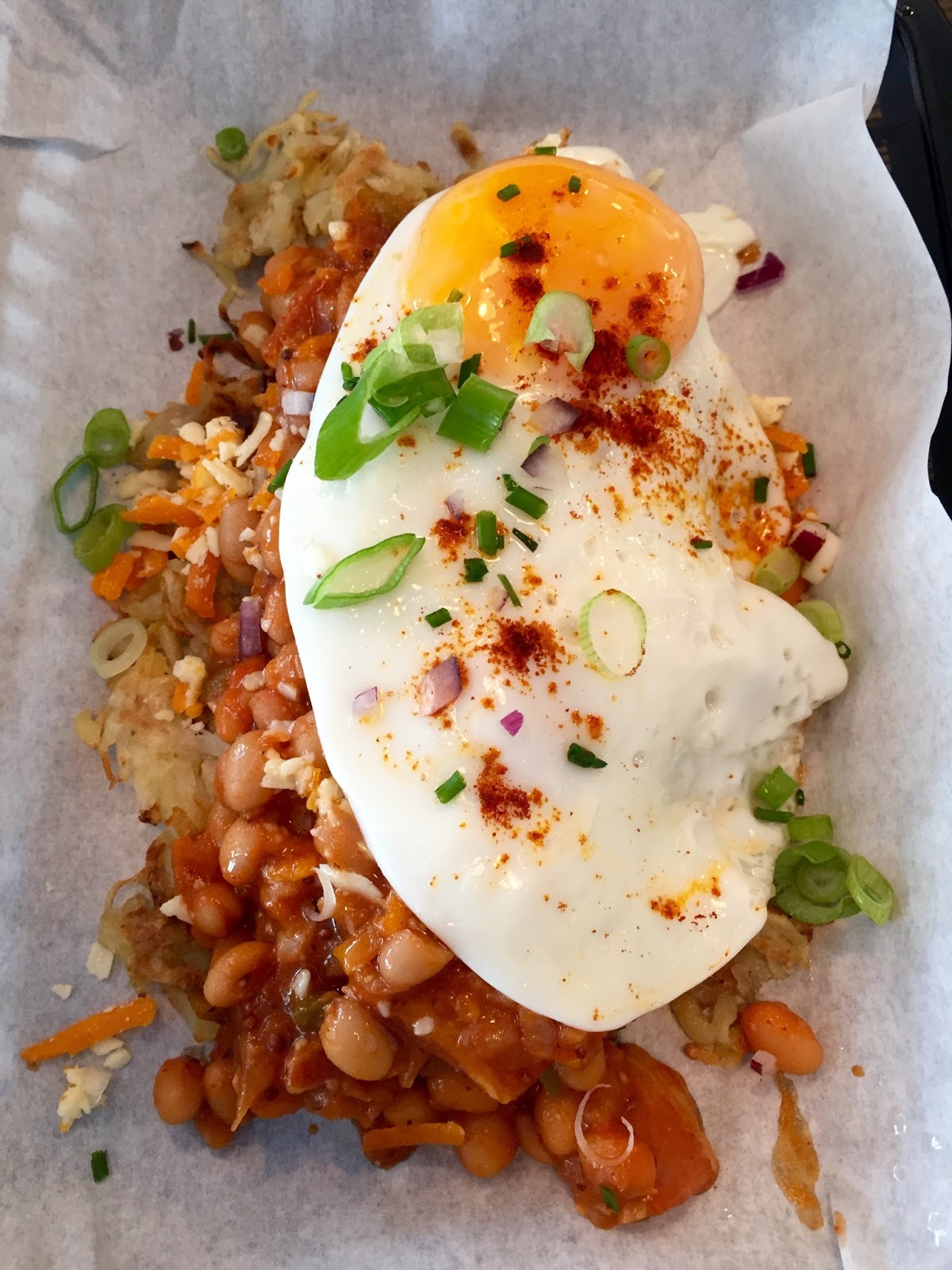 My friend had wanted the philly cheese steak so this was her second choice, she said it was alright, nothing special and like mine, definitely would’ve benefitted from being served at a greater temperature. 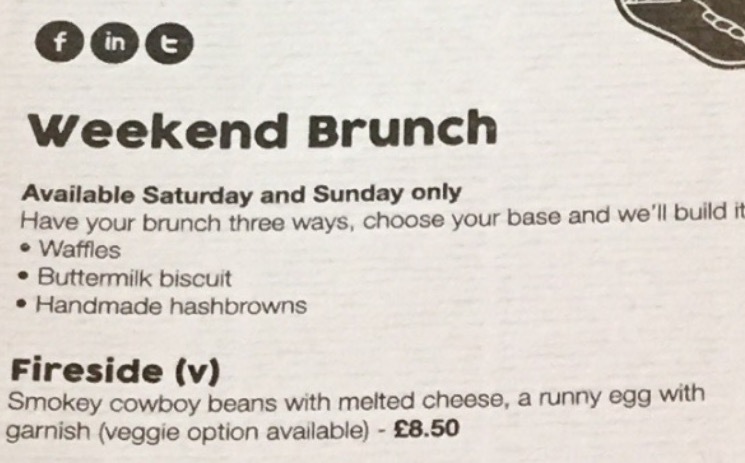 We’d paid the bill when we ordered, and as we got up to leave the manager came over and said ‘sorry to bring it up, but we forgot to charge you for your coffee, so, if you wouldn’t mind?’ – of course I didn’t mind paying for something that I’d consumed, but both my friend (an ops manager for a restaurant group) and I, agreed that, in our experience of working in hospitality, that instances such as a forgotten drink, are written off as the staff’s mistake, especially if the bill’s already been paid.

Whilst I was settling up for my cappuccino, my friend politely pointed out that the way her dish had been listed on the menu was pretty misleading, and that the (v) could mean that the beans (containing bacon) might be mistaken for a vegetarian dish.  Granted, it does says *veggie option available* but in a city like Brighton you really can’t be too careful, surely?! The blank expression on his face, shrug and small whimper we got as a response, indicated the feedback was falling on deaf ears.  I’ll be interested to see what happens if a vegetarian or someone who doesn’t eat pork for religious reasons gets the wrong end of the stick – I can almost see The Argus headline now…

I know I haven’t exactly sung the praises of Union, but I’d be interested to do a revisit once they’ve bedded in a bit, because I think with a few tweaks and some rigorous staff training it could be really good. Also I really do want pretzels and beer cheese and another of those fabulous black cherry sodas too…

Have you been to Union? Where is your favourite place to eat in North Laine? Please do comment below or hit me up on social media (links below) to let me know your thoughts.