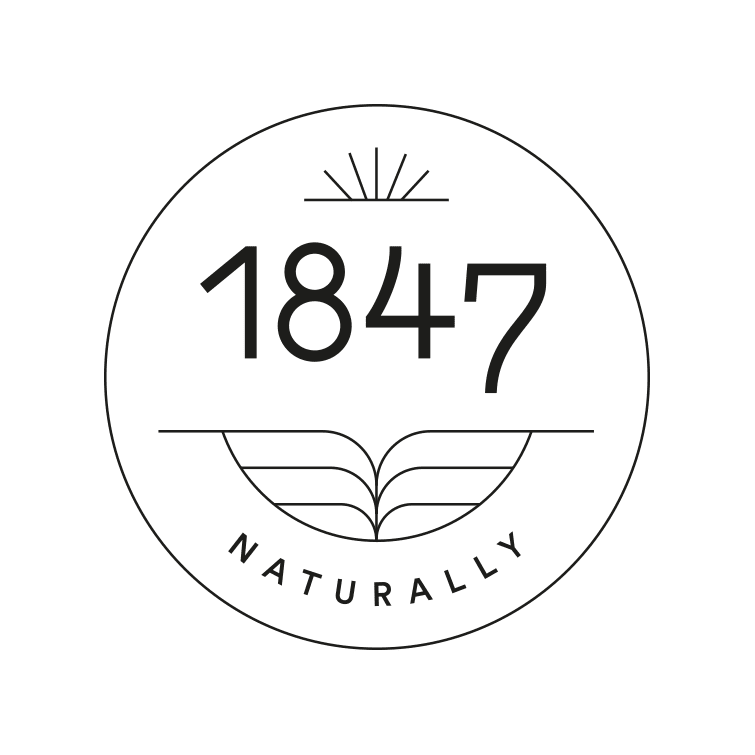 I’m hardly what you’d call an afficiando of vegetarian food. I cook it a lot at home, but when I’m eating out, then the chances are, there’ll be some sort of flesh consumption occurring (apologies to any non-meat eaters reading this), but that’s not to say I’m opposed to it in a restaurant setting.

1847 is part of a chain who boast ‘modern, innovative vegetarian food and drink’ and they set up shop in Brighton late last year, at the bottom of North Road in one of *those* sites which seems to change hands a lot.

I didn’t actually pay for my meal, as they invited me to review, but 2 courses for £19.50 or 3 for £25 – for a menu with no meat, on this pricing structure, seemed keen as mustard, to me.  It might well be the reason I’m seeing perpetual tweets from the local radio station, offering a 50% discount to eat there… Check out the full summer menu over on their website. 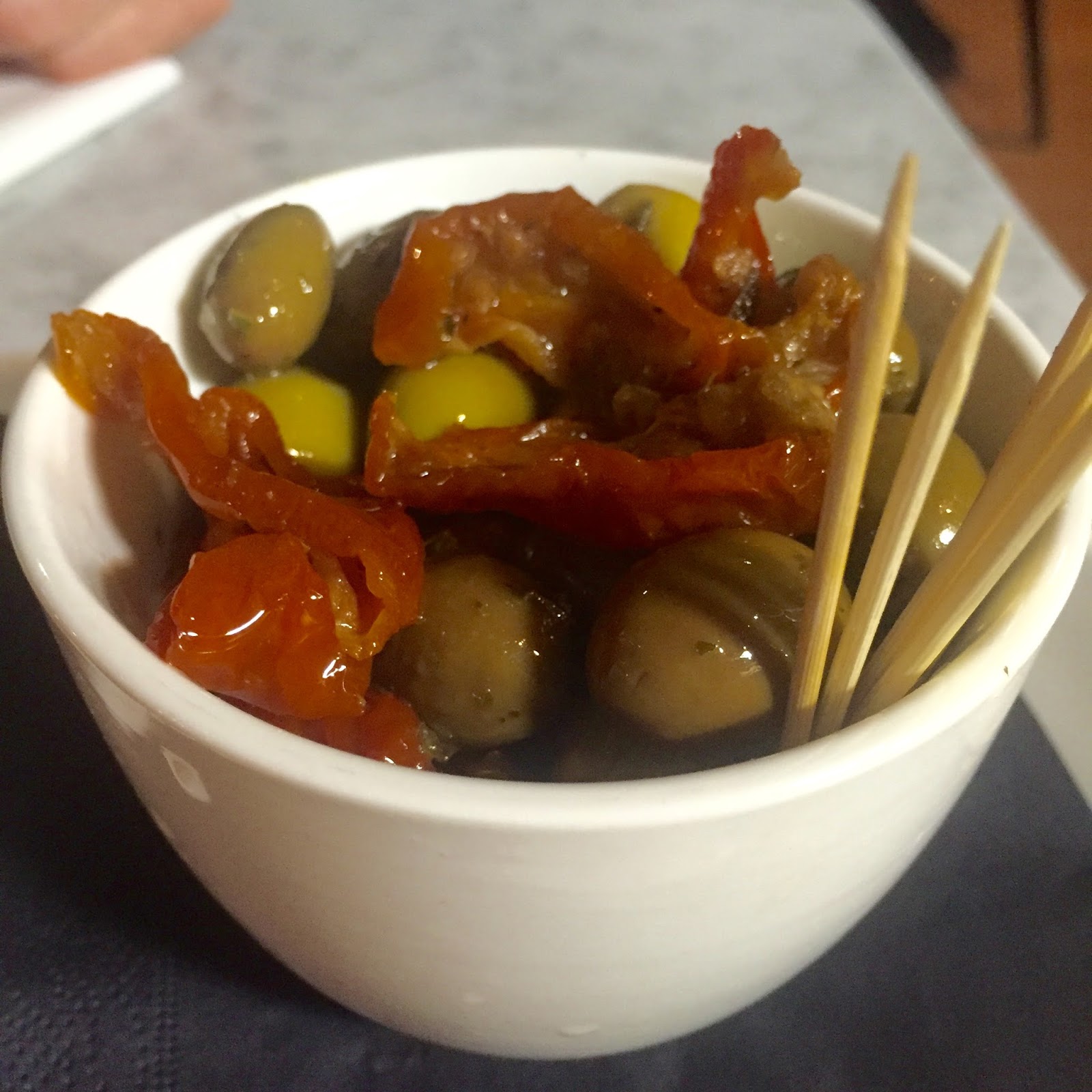 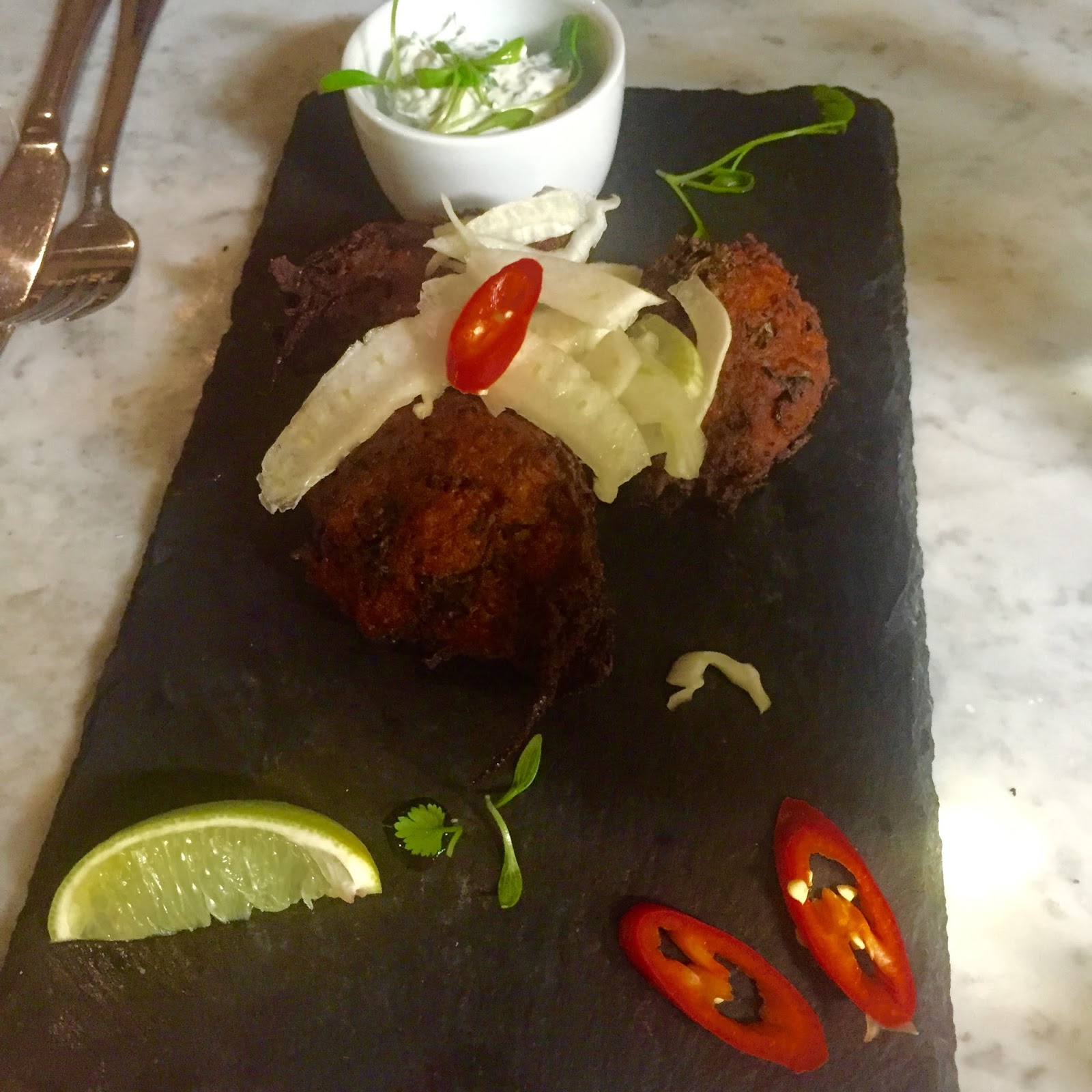 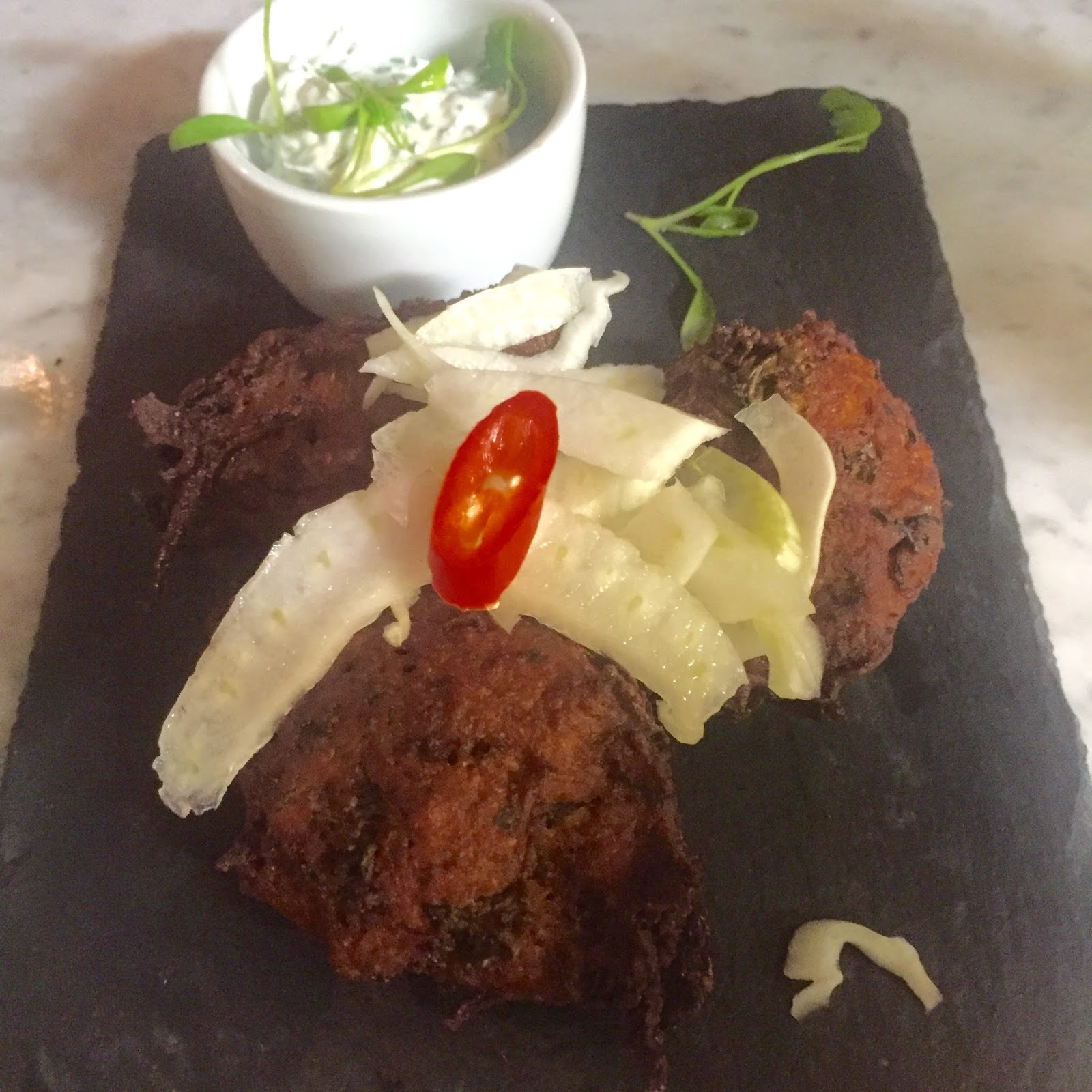 I’m sure all of you at one time or another will have grabbed a ‘takeaway curry’ from the chiller aisle at your local supermarket? Well picture the Indian starter selection, albeit a nice one from M&S or Waitrose, say, and what we were served to start wasn’t far off that.  The yoghurt vaguely hinted at the coriander flavour it was meant to have, but the fennel seemed to have been put there more for show than anything else. 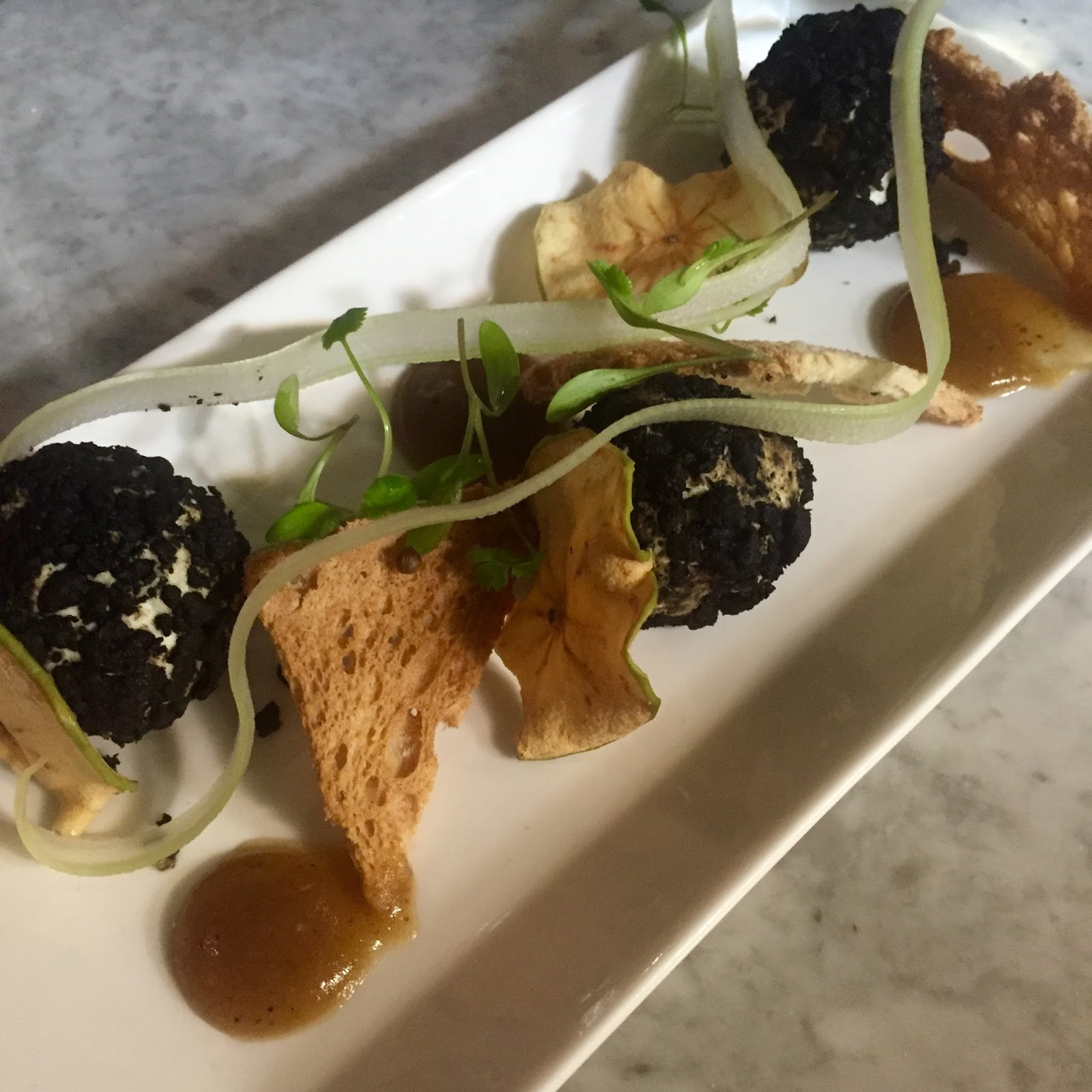 Goats cheese balls, what do you imagine when you conjure up a mental picture of them? I envisaged some kind of fritter, something hot with a crispy outside and an oozing innard, sound about right? Well what I actually got left me cold… colder than the fridge temperature cheese ball which had been rolled in something crumbly and tasteless. The dehydrated apple slices brought nothing to the party, and there’s definitely a joke in there about the 90’s calling and wanting their Melba toasts back too… 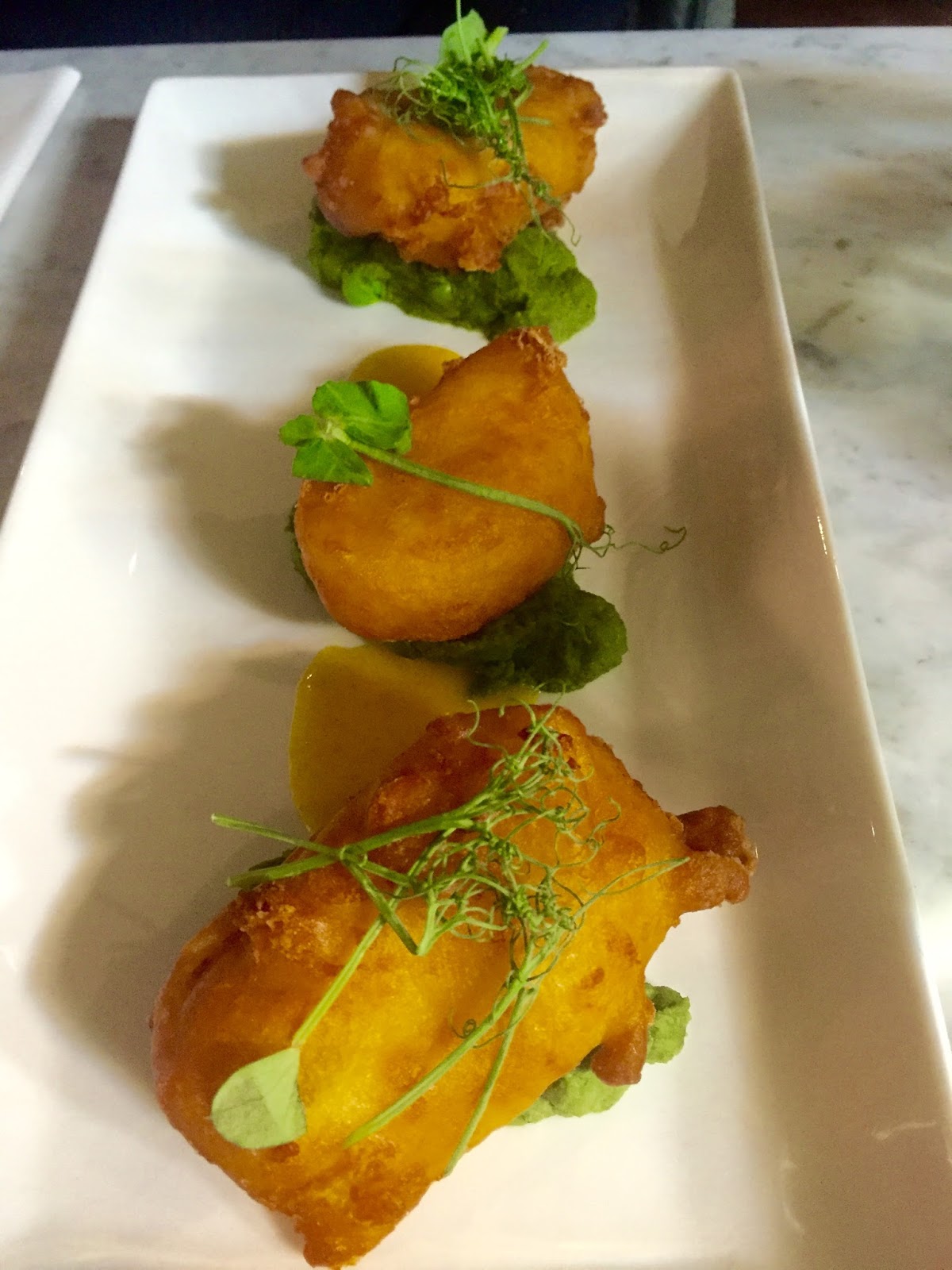 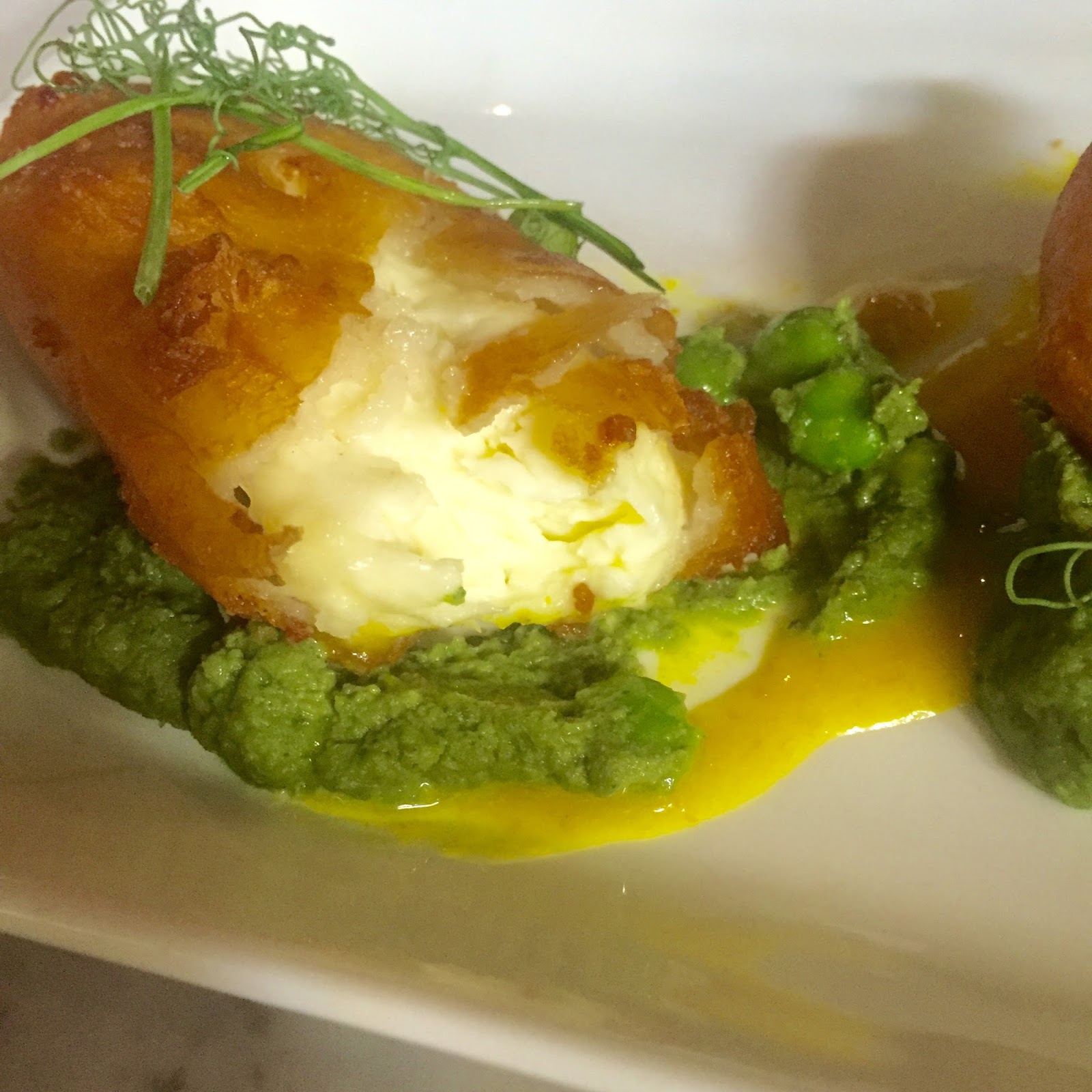 Undoubtedly the best bit of the meal. It was almost spooky how like a piece of well cooked battered cod, they got this halloumi to taste. Mum and I both loved it, but, would we did both comment on how a vegetarian might feel about eating something so very flesh-like. 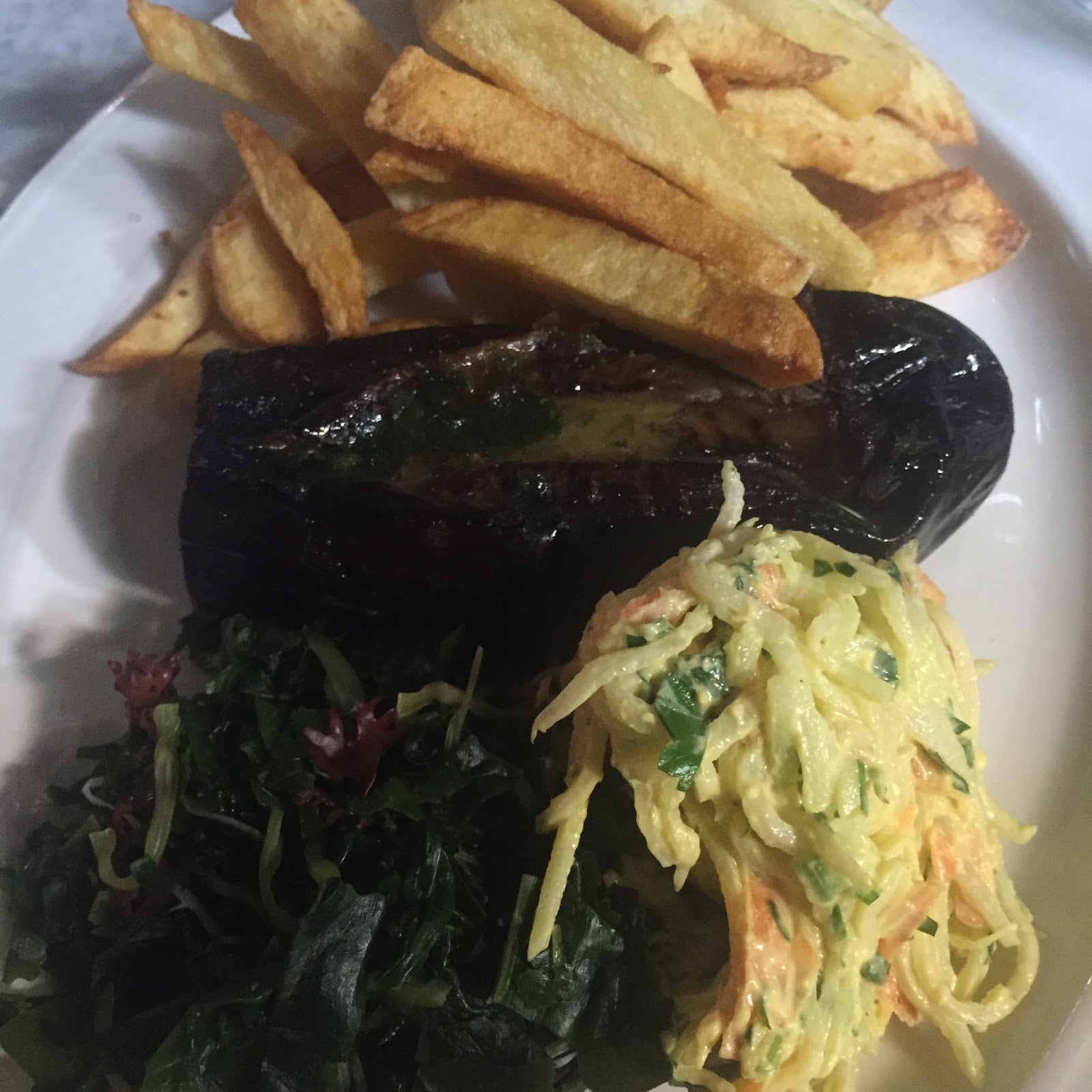 The aubergine was very definitely the ‘star’ of this fairly lacklustre show, but I’m not sure how much I’d have enjoyed it without the generous slick of garlic and herb butter.  I exchanged the Jersey Royal potatoes it was supposed to come with, for chips, which were only ok – my Mum’s tasted like they’d come out of the frier a lot more recently than mine had. The seaweed salad would definitely have benefitted from any kind of dressing at all, and the slaw was bitter, SO bitter. What I was served was about 80% kohl rabi to 20% carrot – had it have been 50/50 it would’ve been a lot more enjoyable. 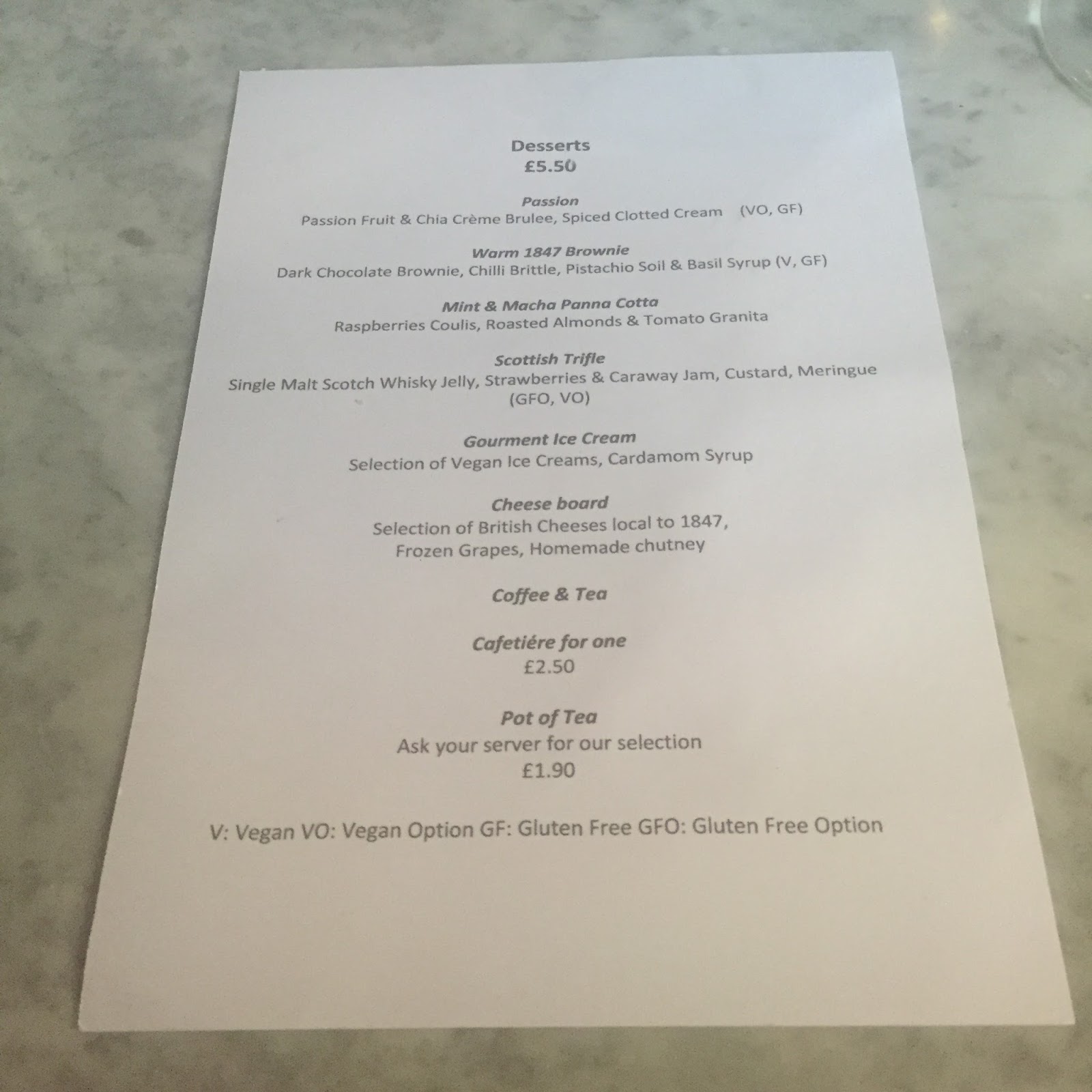 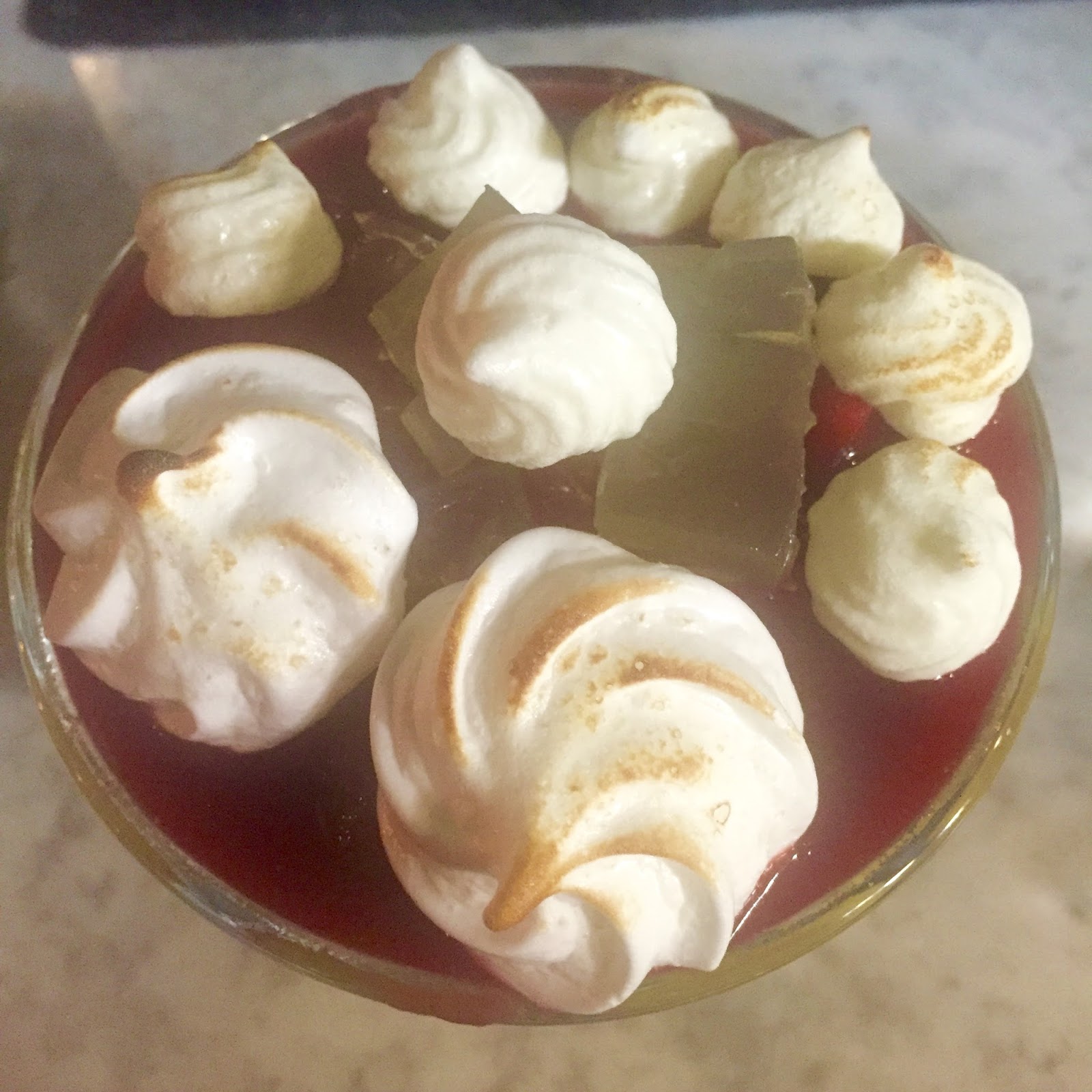 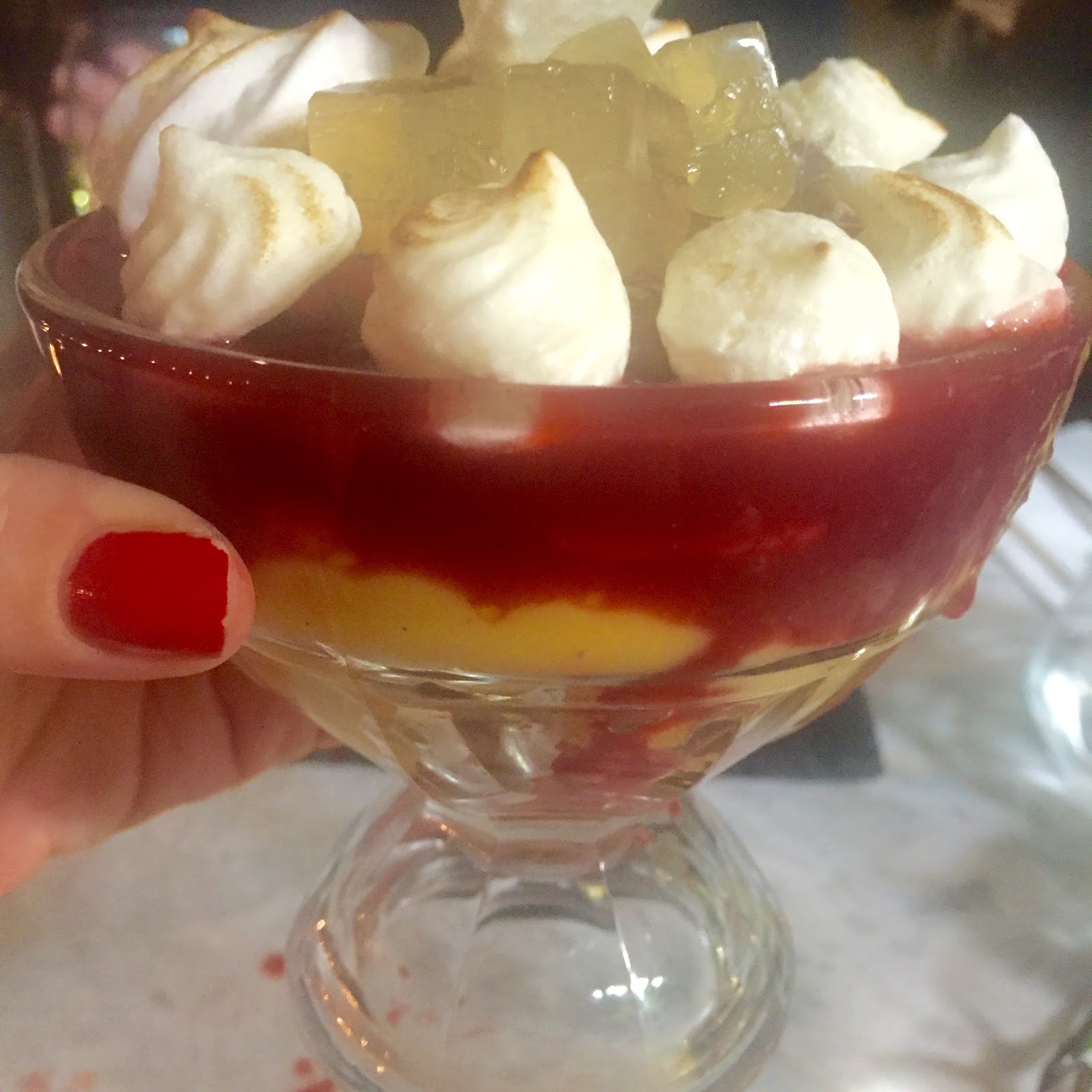 It’s not often I say this about something, especially not a trifle, but I truly hated every aspect of it. It was just all wrong. The sponge element at the bottom was dense and unpleasant tasting, the liquid custard was completely dominated by the overly tart coulis and the shards of jelly didn’t taste of the whiskey they claimed to be flavoured with at all. I’m not sure how the good people of Scotland would feel about being associated with this…

When the waitress cleared our plates and asked what we didn’t like about it, we had to politely say that we hadn’t liked any of it at all. Awkward, but she took it like a champ, to be fair to her. 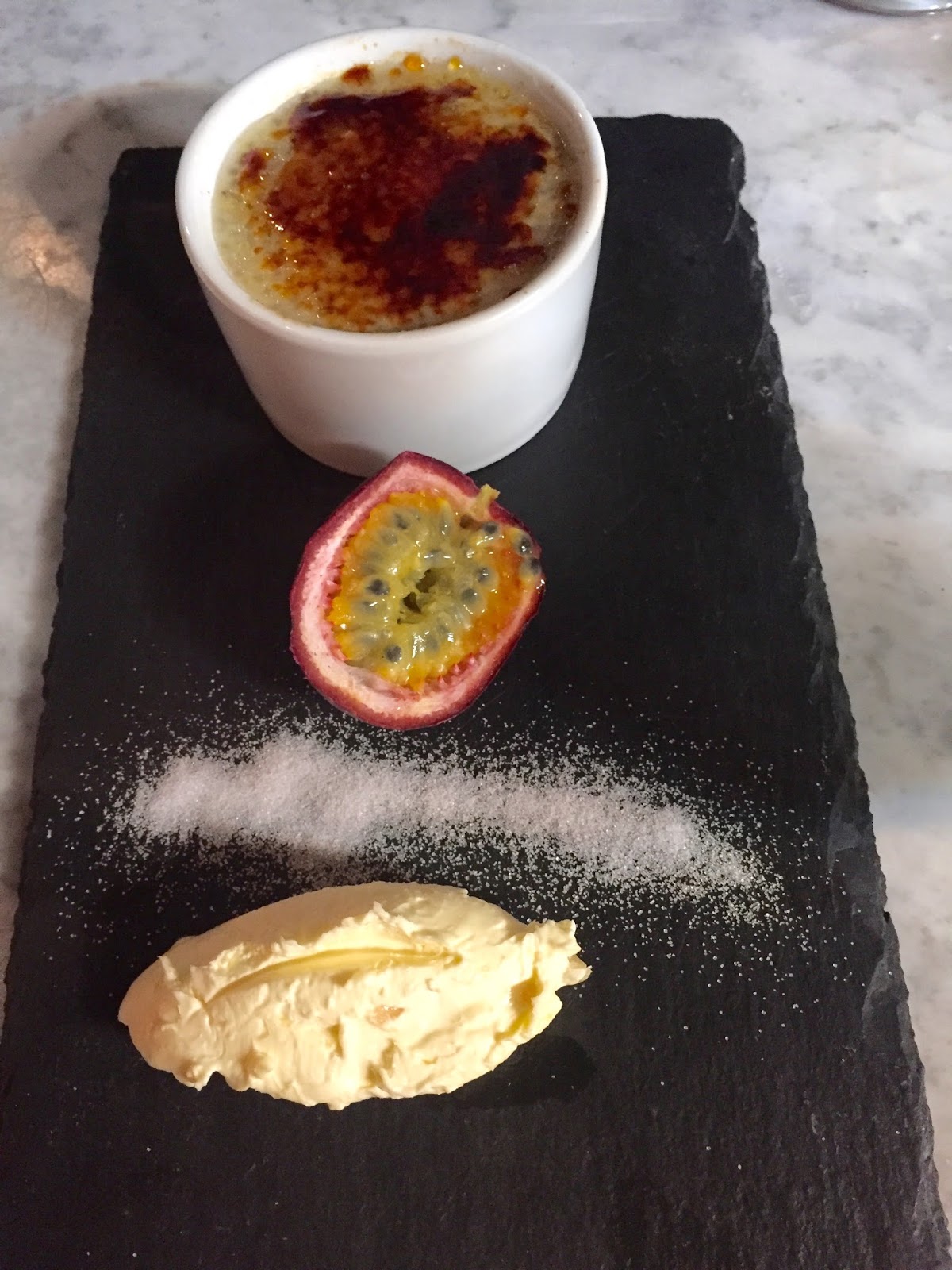 I had mixed feelings about this, I enjoyed the flavour but the texture was a bit too bitty for either of our liking. I know that might sound slightly ridiculous as it was a chia seed pudding, but I reckon they could’ve swapped 50% of the seeds for more of the custard and it would’ve made for a much more pleasant experience, especially given that it was garnished with passion fruit – even more seeds!

Whatever the spice they’d mixed in with the clotted cream was, well, I hope I never have to eat that flavour combination again, it managed to taste spicy and rancid at the same time – I disliked it with a ‘passion’. 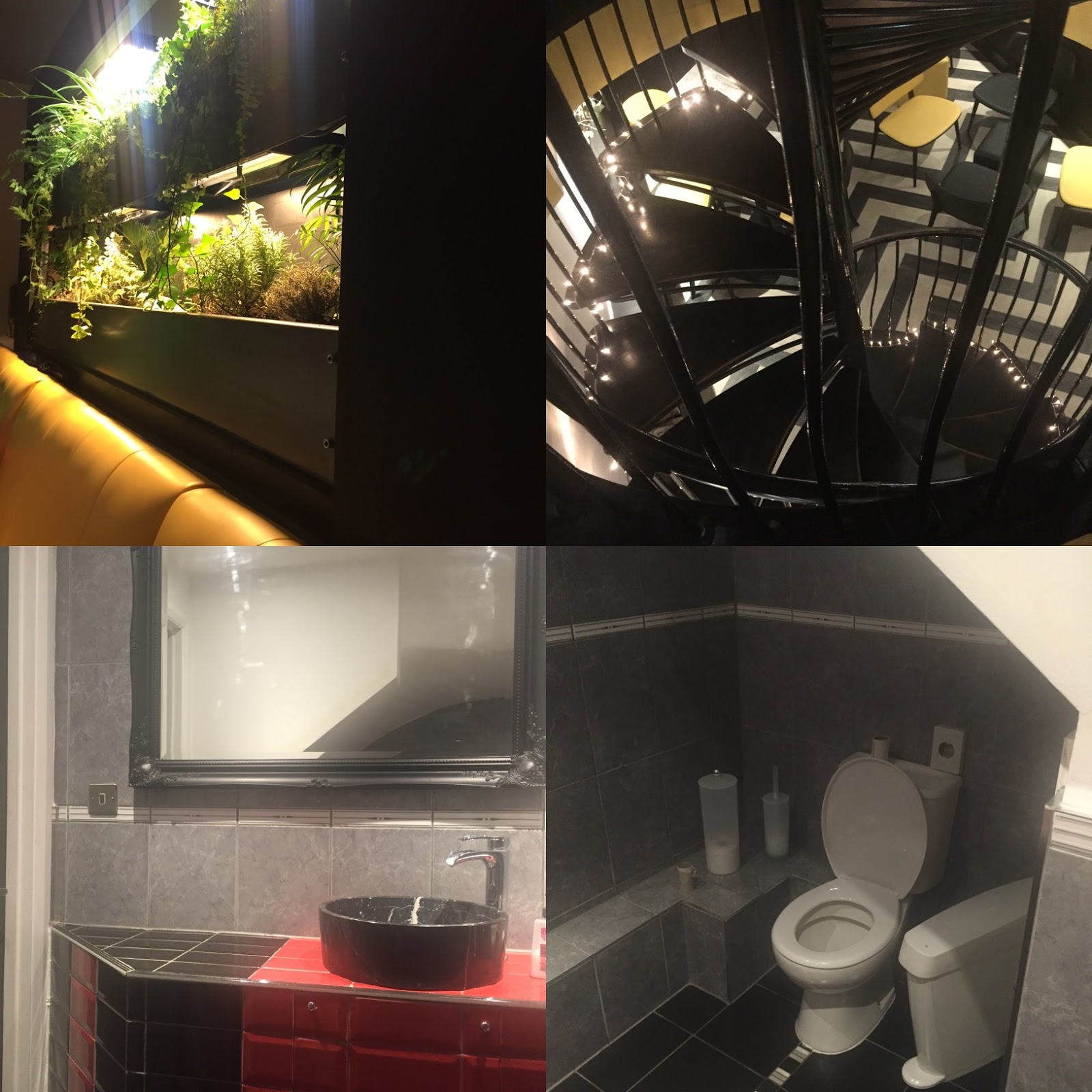 If I had to sum up my evening at 1847 in a sentence it would be: Nice plants, shame about the food.
I wanted to be able to say I loved it, but in reality, I didn’t even really like it very much.  The interior was ok and the service improved vastly after someone told our waitress I was there to review, but I wouldn’t go back, nor would I recommend.

Have you been to 1847? Which is your favourite vegetarian restaurant in Brighton? Comment below or hit me up on any of my social networks (links below).