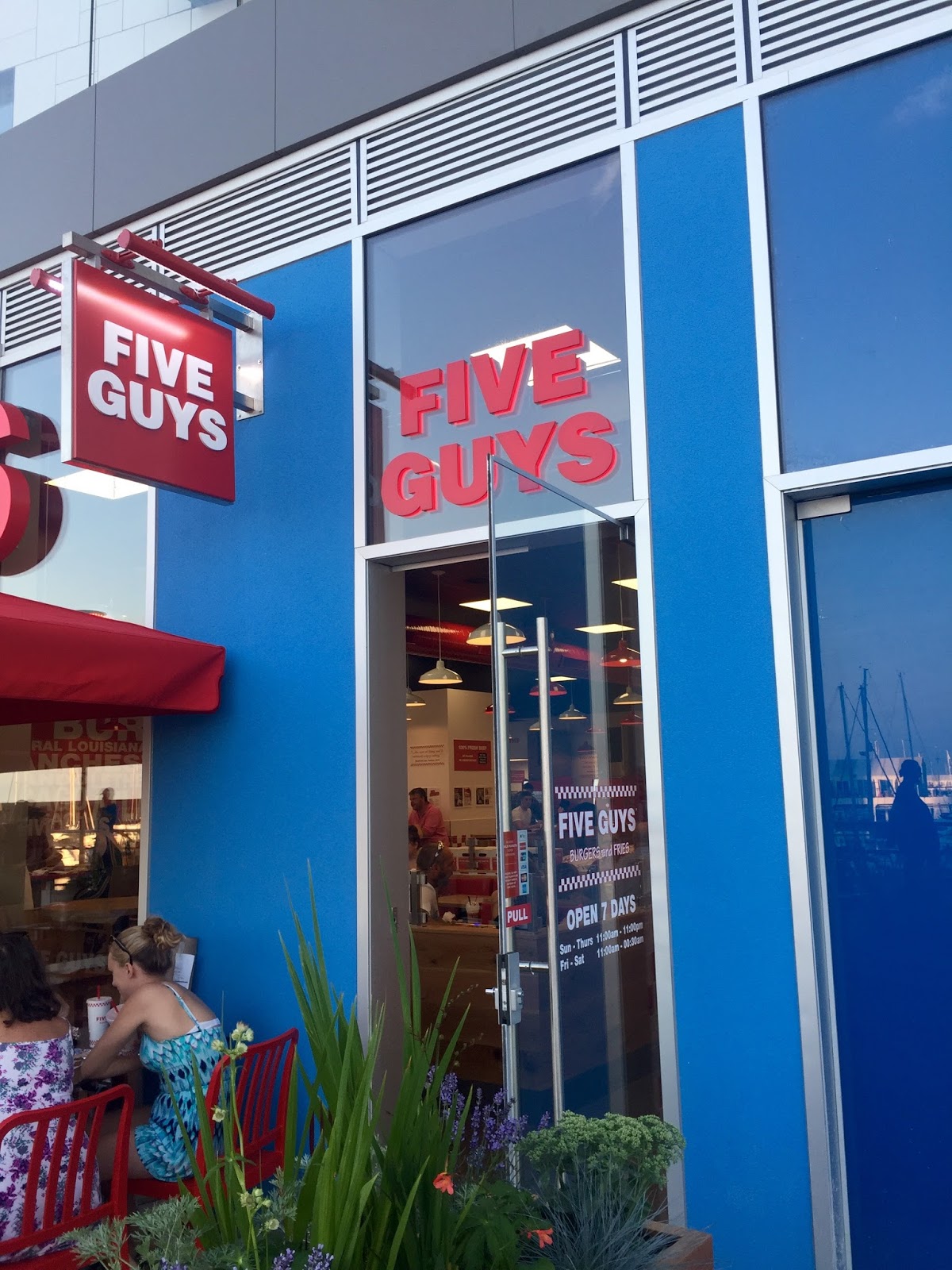 Despite my ongoing quest to discover the loveliest eateries in Brighton, I’m no stranger to chain junk food offerings*. That’s right dear readers, McMuffins are gleefully consumed, Dominos pizza trackers are refreshed and KFC gravy is ordered in double portions…

We had a mad rush of pop ups and new openings with burger-centric offerings a couple of years ago, and I know many people in Brighton are a bit *over* burgers – but I ran a Twitter poll asking where people would like me to review next and Five Guys topped the poll with a 60% majority – so here we all are. If you don’t already, you can follow me on Twitter here.

*I am fully prepared to get slaughtered in the comments section for this revelation, but whatevs. I do a lot in the way of eating at independent places , but sometimes only a McD’s quarter pounder with cheese and 20 nuggets, will do. Sorry about that. 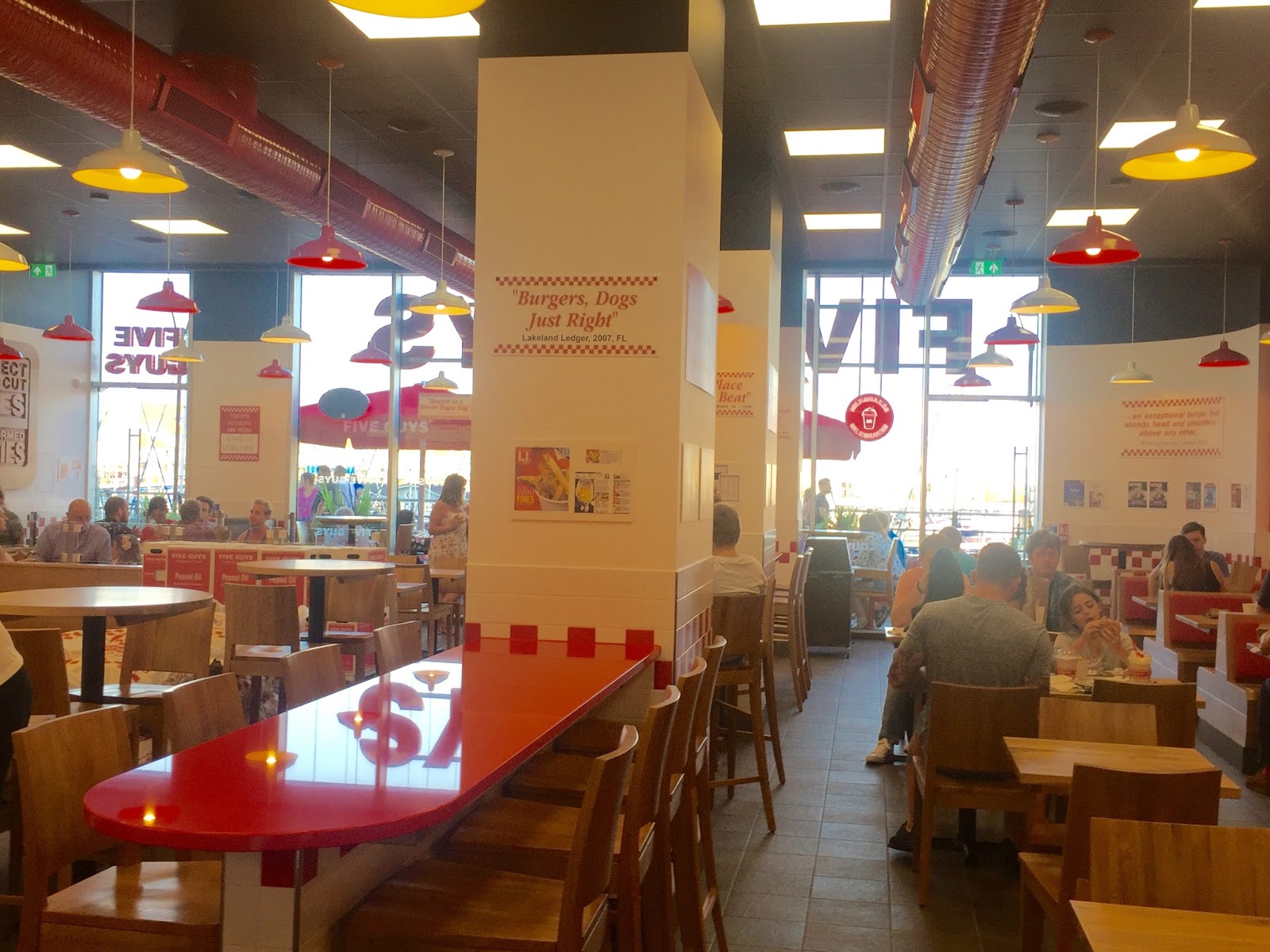 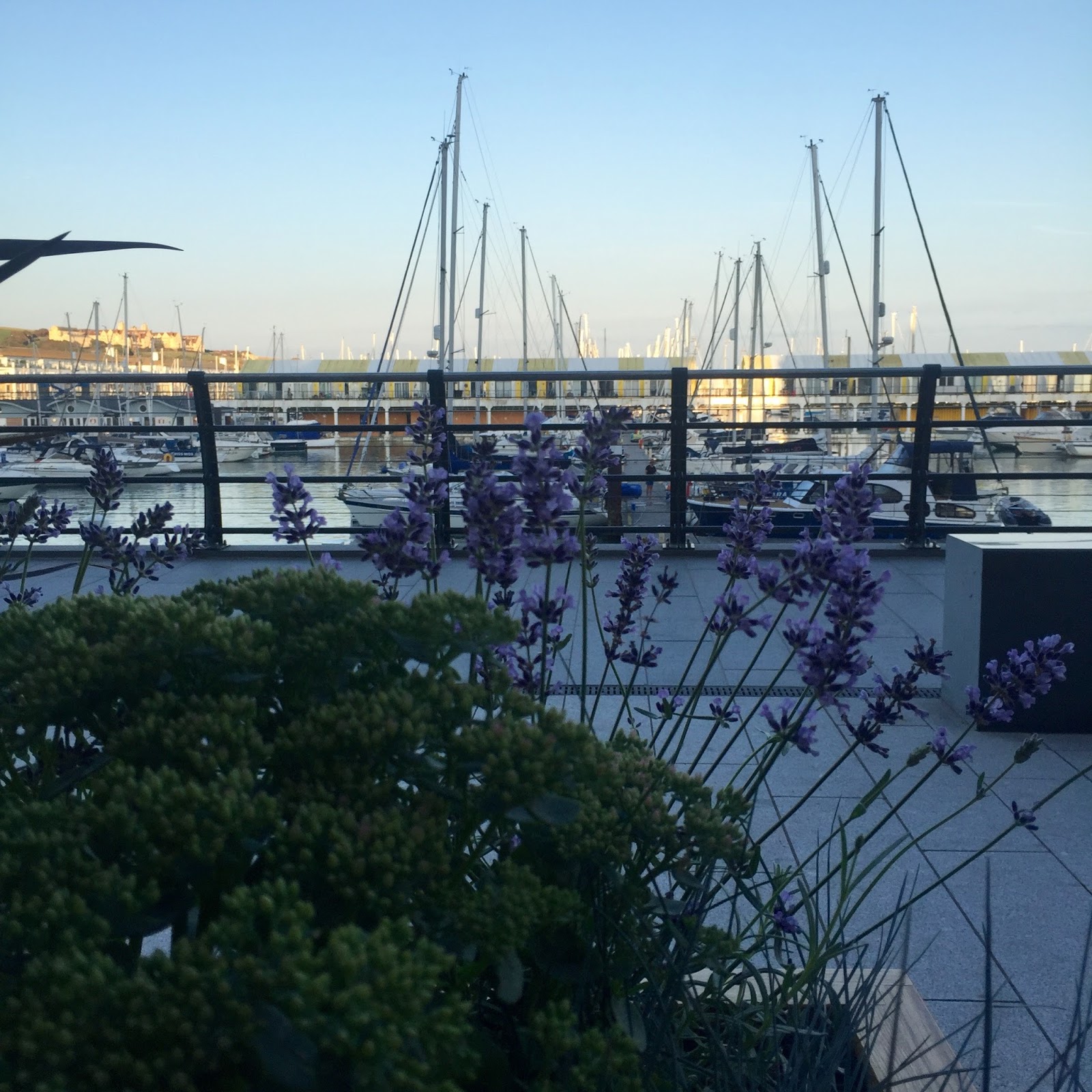 The interior is that of a diner-style, no-frills burger joint, with about the same level of ambience as a Burger King, so, if you’re the kind of wrongun person who eats a burger with a knife and fork/hates loungewear, then dining here is going to be a bit of an ordeal for you… 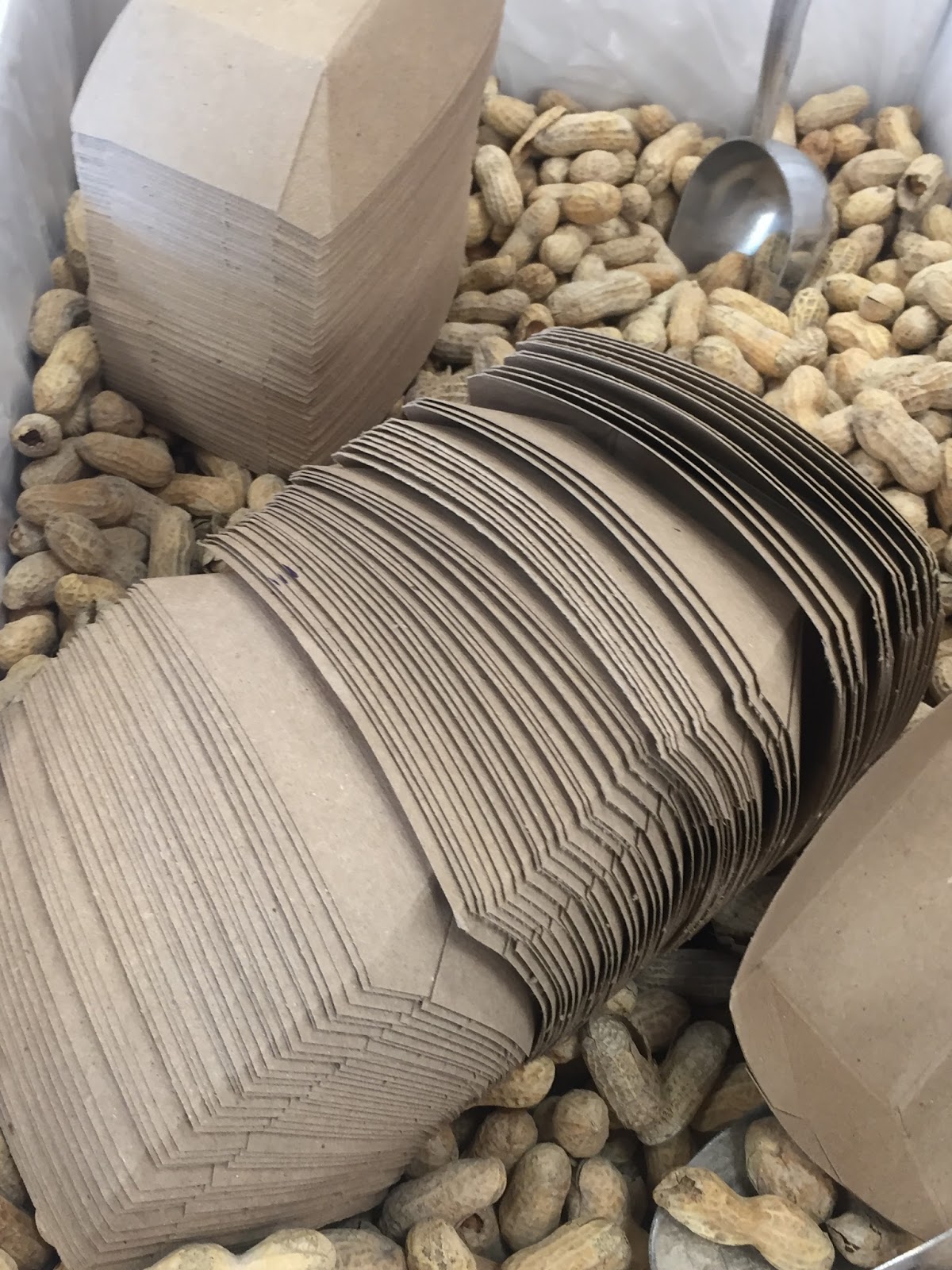 If you’ve got a peanut allergy then Five Guys is your worst nightmare, the food is all fried in peanut oil and there’s sacks of complementary monkey nuts for you to dig in to whilst you wait for your order.

Oh and for all you burger-lovin’ single ladies, both times I’ve been in there at 10pm on a Friday night, it was full of men, just an FYI. 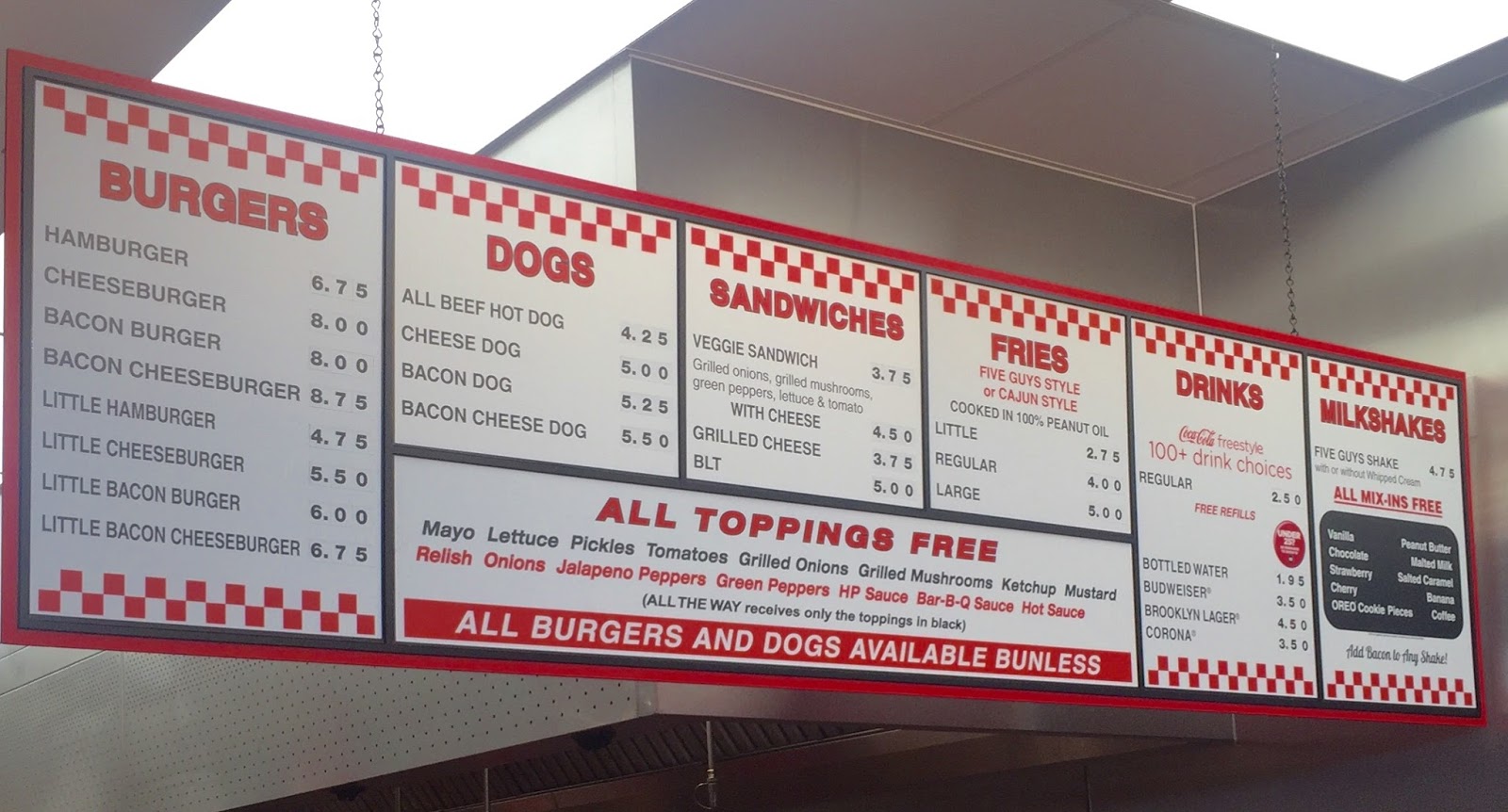 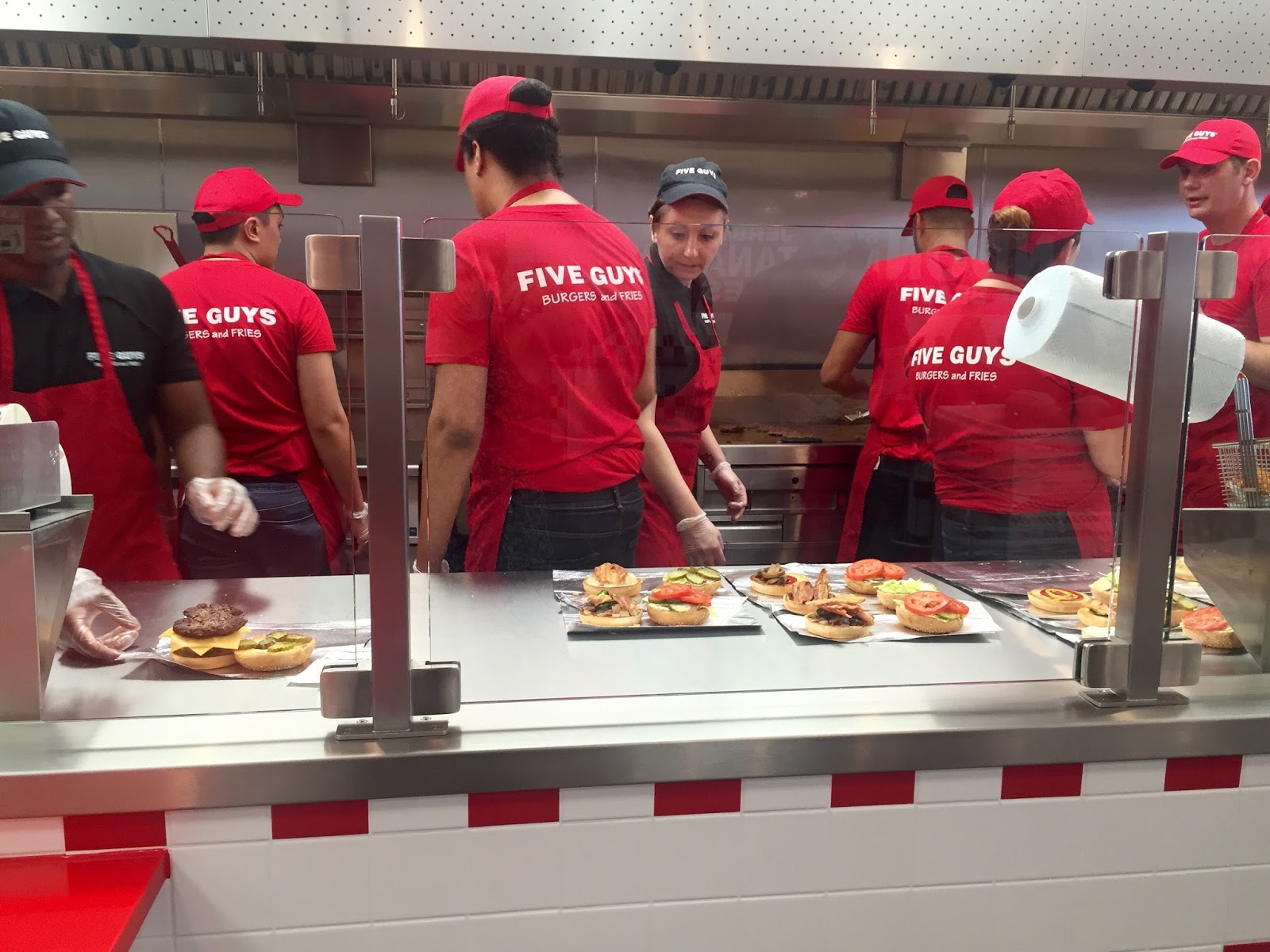 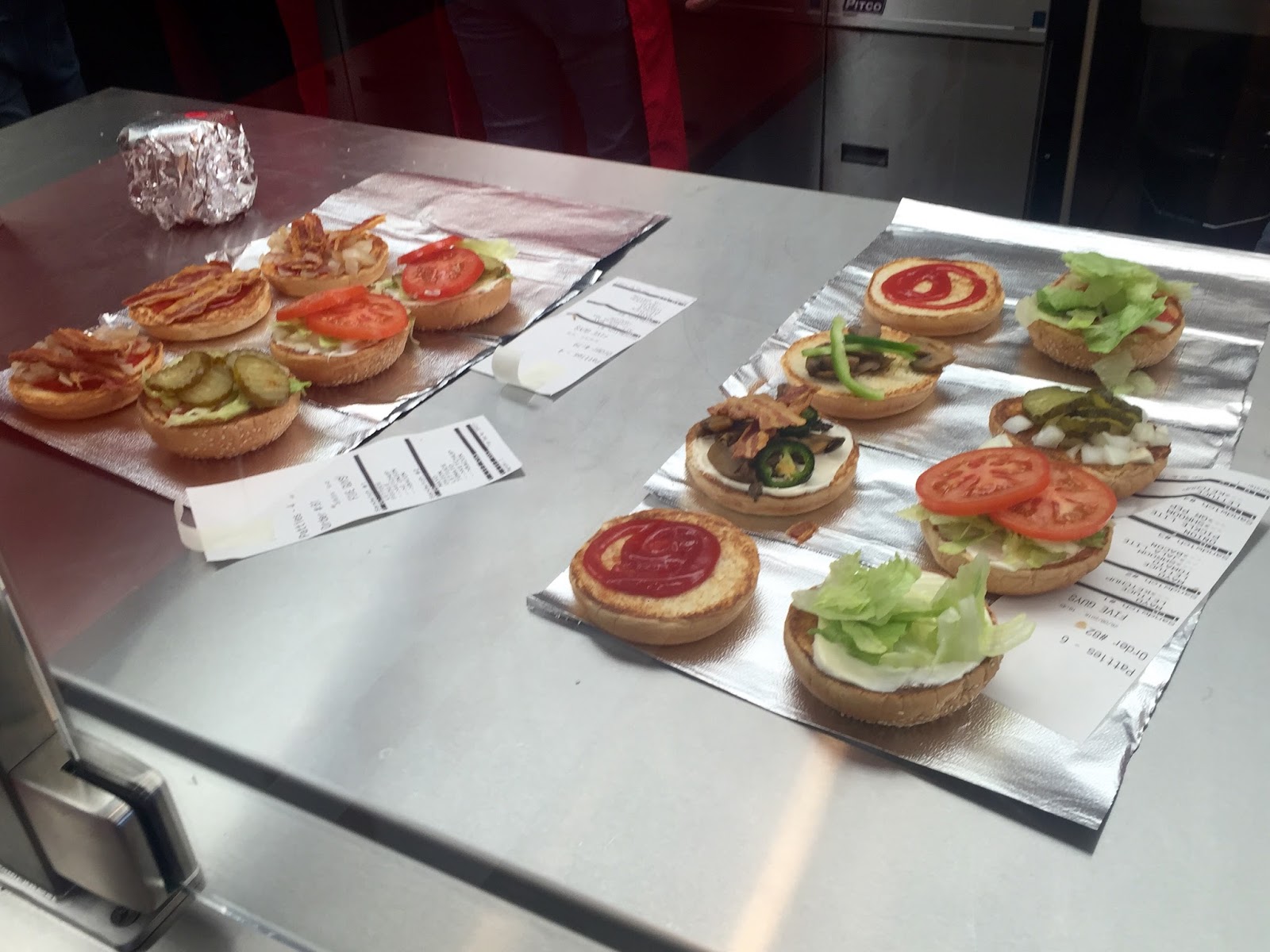 They’re quite clearly formulaic in their approach to burger assembly, but I’ve eaten there four times in as many weeks and they have got their consistency on lock-down.

All burgers are two patties as standard (unless you order a ‘little’ one) but don’t come cheap, with cheeseburgers starting at £8. Given that you can get five McDonalds double cheeseburgers for less than that, I can imagine Five Guy’s pricing structure eliciting more than a few raised eyebrows from some, but there’s clearly zero f**ks given by the long queues of people during my visits, so… 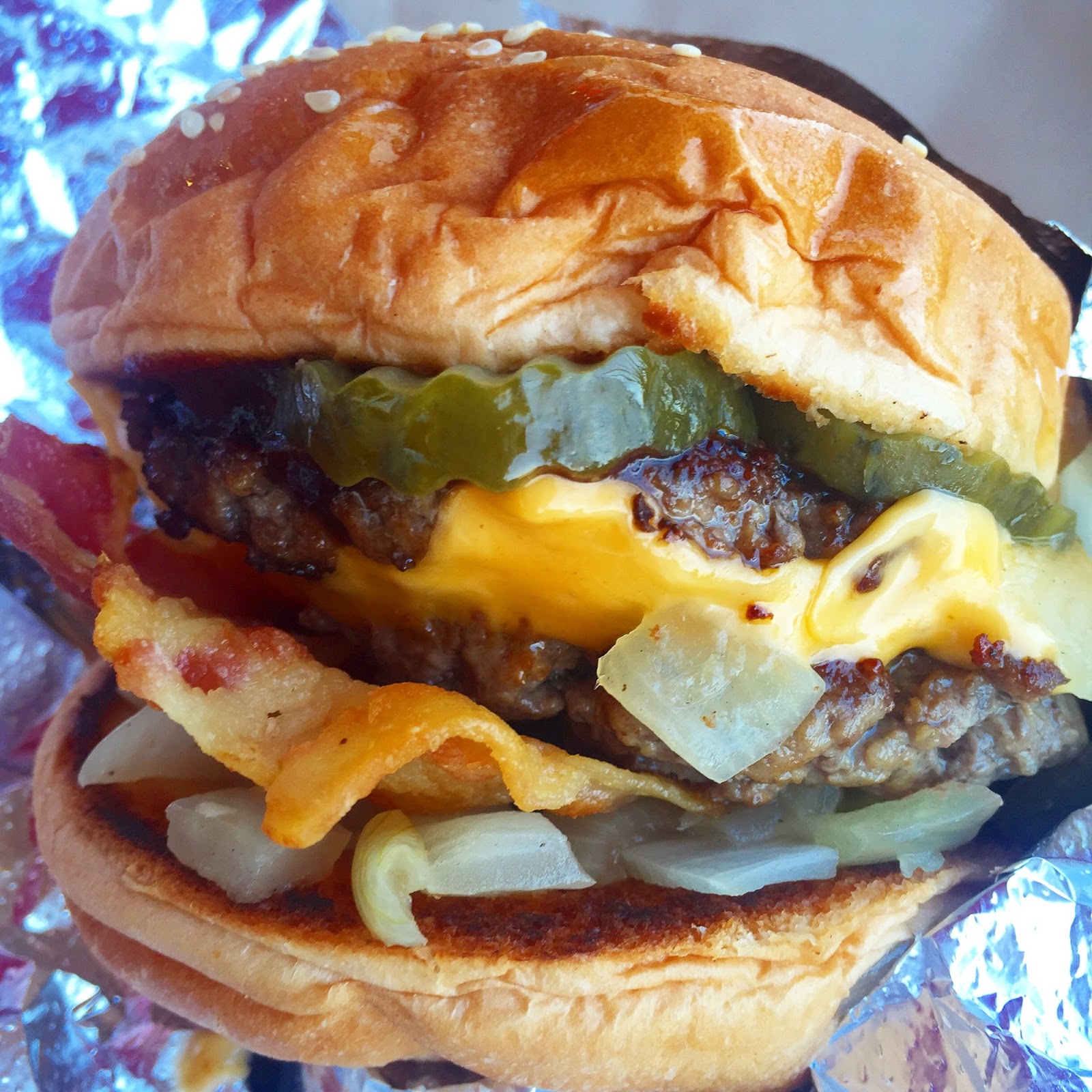 All their burgers, either eat-in or takeaway come wrapped in foil  (and slightly squished) so they’re certainly not the prettiest, but are they the tastiest?

I resisted the urge to go ‘all in’ and kept it simple with cheese, bacon, grilled onions, pickles – basically allllll the good stuff. The two juicy patties were housed in a sweet soft bun, which actually did a pretty valiant job of holding it all together until the end. I really, really enjoyed it, so much so I’ve had the exactly the same thing on all of my subsequent visits. 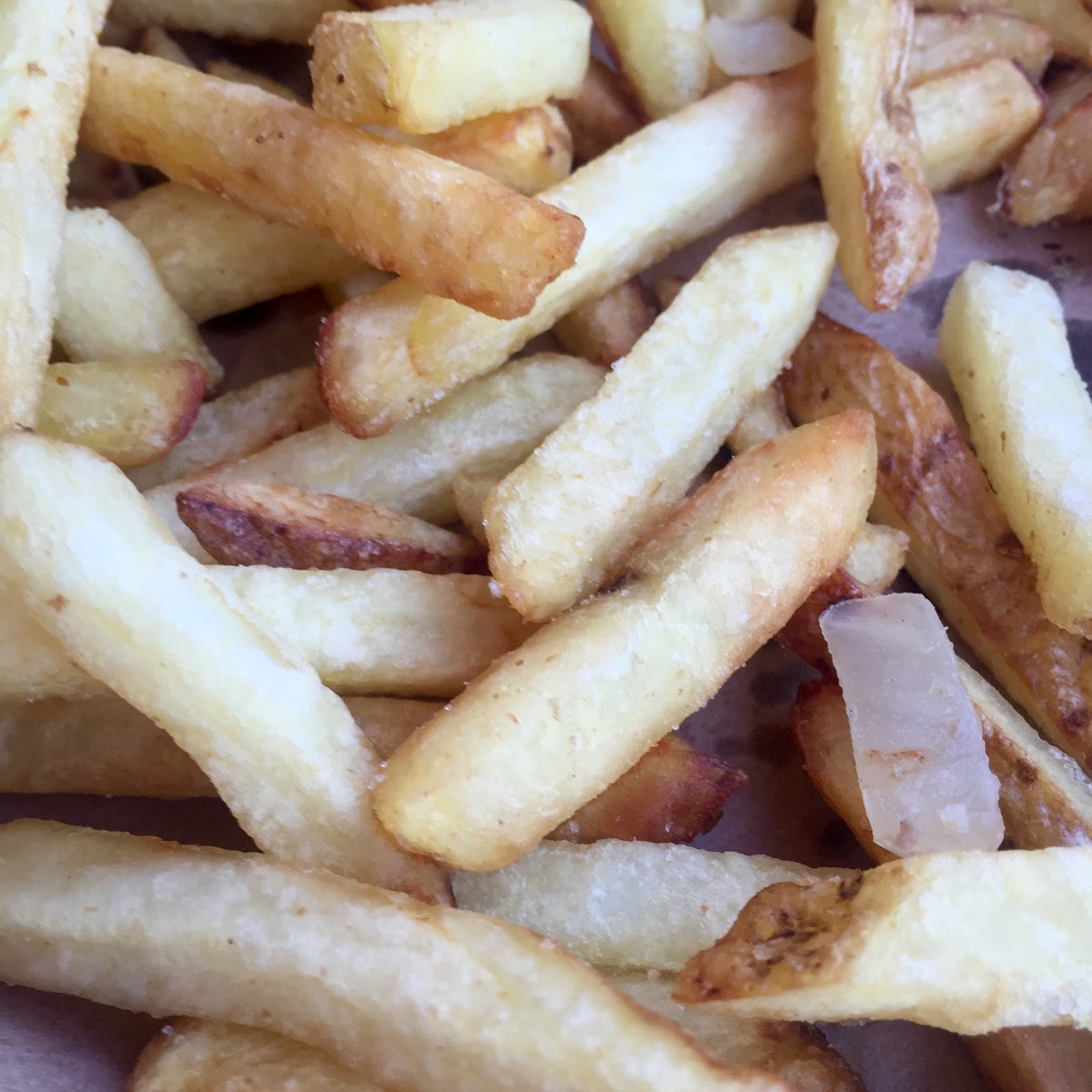 When I tried to order a large portion of fries I was emphatically assured that a small would be more than enough, so despite my inward ‘that’s what you think, pal’ I took their word for it.

Hand-cut on the premises (evidenced by the sacks of potatoes piled up everywhere) they come served loose in a brown paper bag, American grocers’ stylee. Skin-on, crunchy and greasy in the way chips ought to be, at £2.75 for a small portion, the’re unlikely to be the cheapest on sale at the Marina, but goodness gracious me, they are glorious. The menu is crying out for some onion rings and  other sides though… a bit sparse on the condiment selection too.

They actually reminded me a lot of the chips Burger Brothers used to sell, for a very brief period, I’m gutted they stopped and not been back since, because as great as their food is, I do not want to eat a burger on its own! 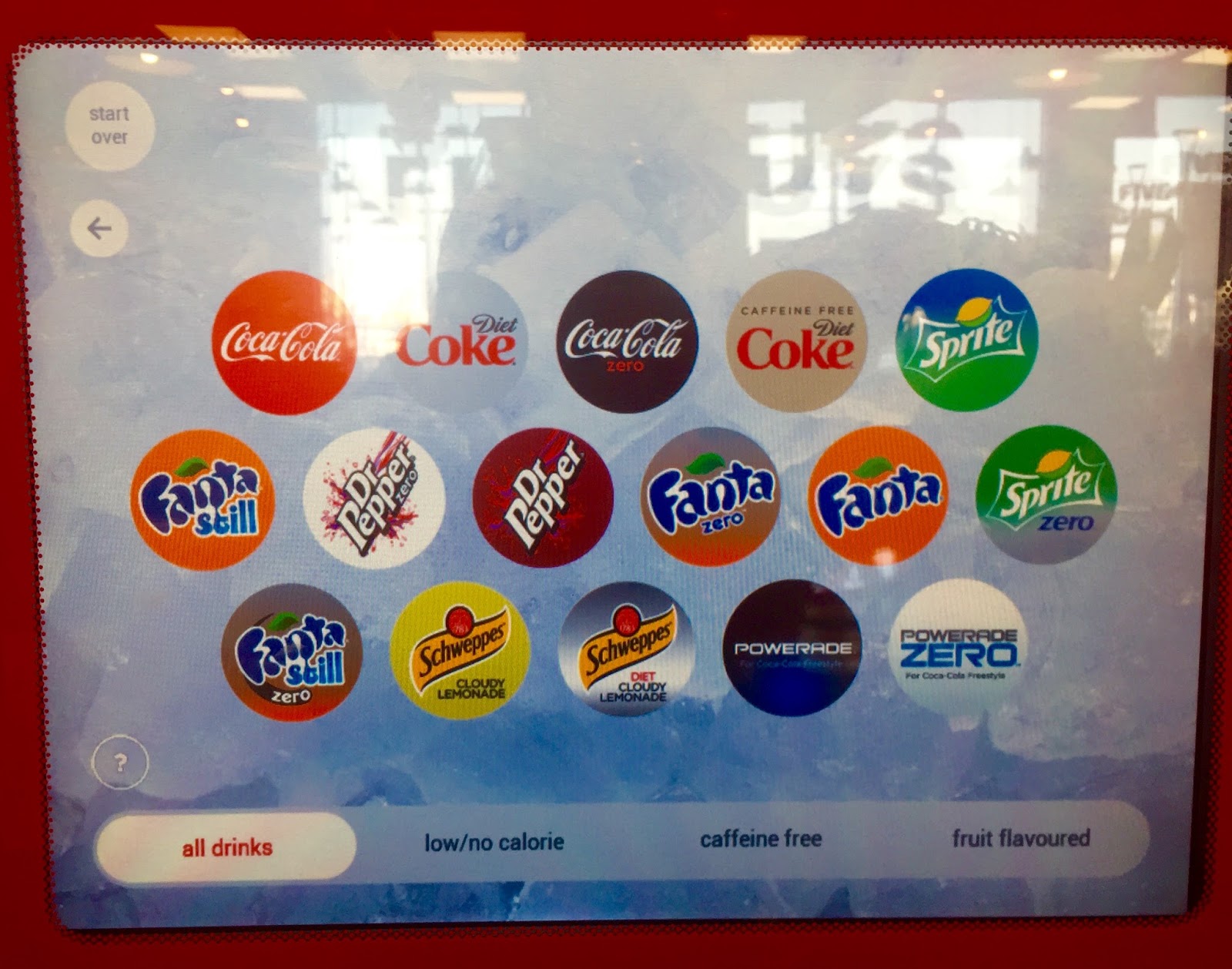 You know how some people are chocoholics? well that’s exactly how I feel about fizzy drinks and this Coca Cola ‘freestyle’ machine is a serious bit of kit. £2.75 for a *bottomless* cup and with over 100 different flavours, the possibilities are endless! Hel-lo there peach sprite, where have you been all my life?! 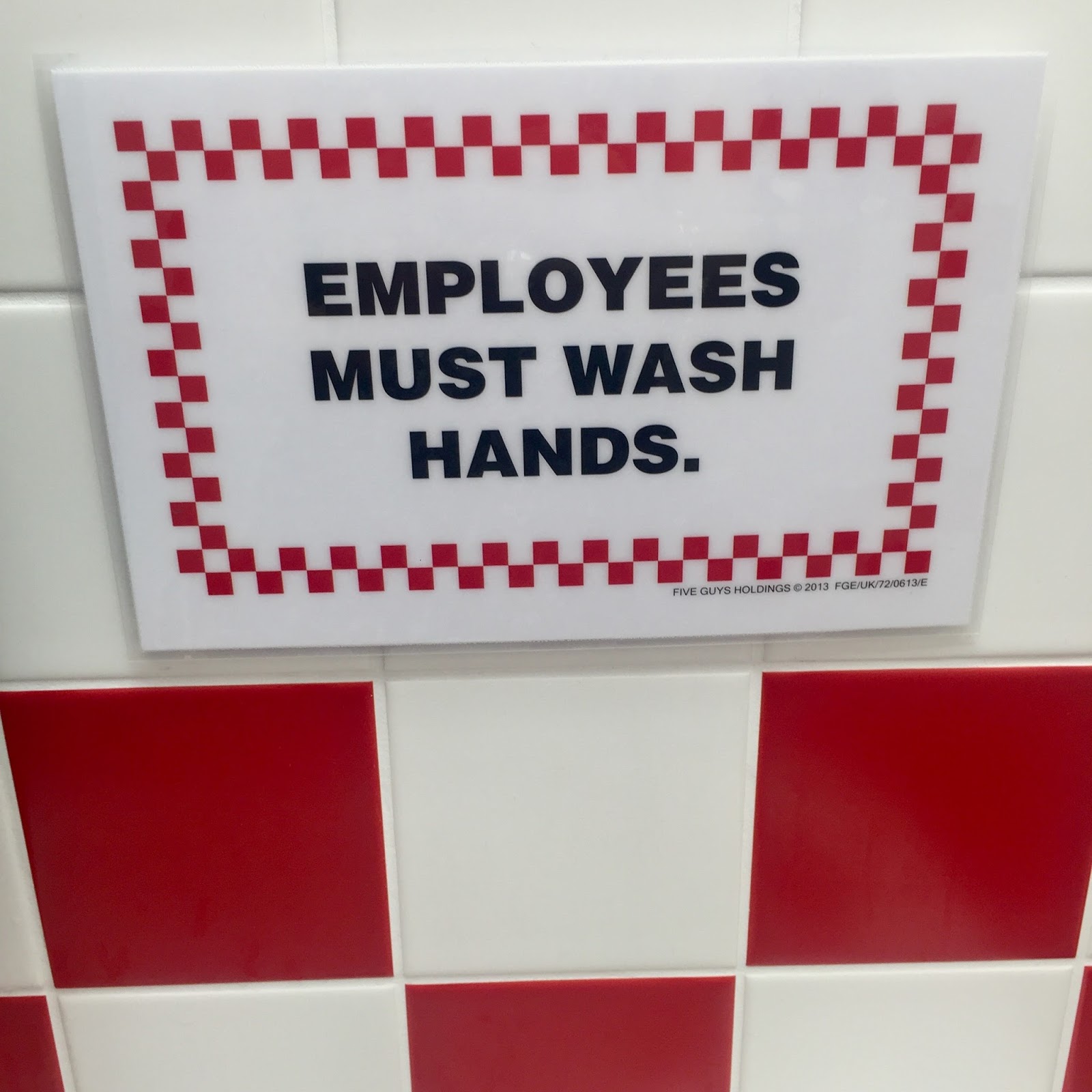 All in all I am a fan of Five Guys and not least because it’s five minutes from my house! DANGER.

Have you been to Five Guys yet? Where’s your favourite place to eat burgers in Brighton? Hit me up in the comments section or on a multitude of social networks (links below).