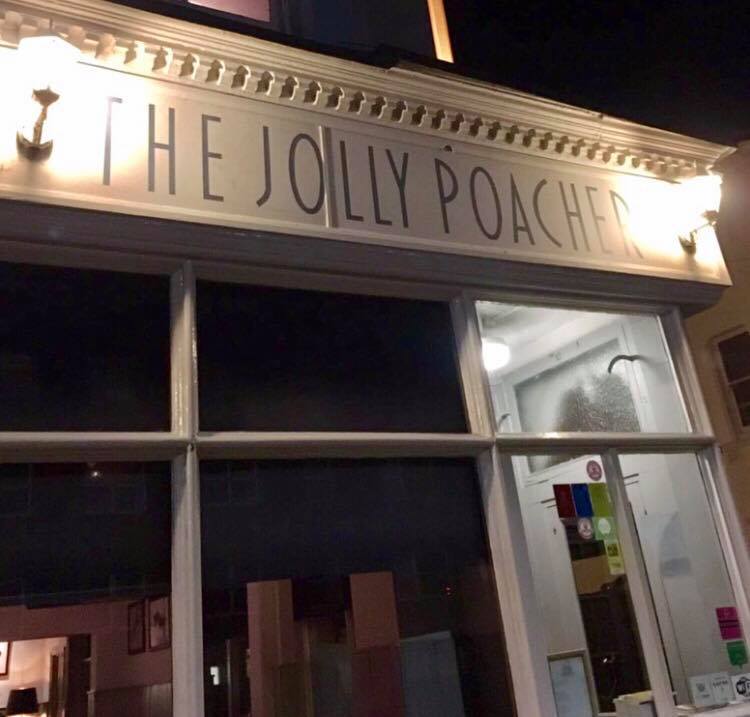 I first visited The Jolly Poacher on one of my Sunday roast missions back in 2015 and gave it a solid 8/10, declaring theirs to be ‘the best roast potatoes in the 60 places I’ve tried’. I followed that up by saying how keen I was to go back and try more of their menu, then I promptly forgot all about them really, until very recently.

I always have a little peruse of the internet in advance of a visit to a restaurant, but it’s not often, if at all, that I consult TripAdvisor, however as no one had written anything about it at all* (other than a certain local advertorial site) I was left with no choice. My short trawl through the reviews left me feeling like perhaps Fran (The Graphic Foodie) and I, were going to be in for a rough, and expensive ride. There were some ‘jolly’ good japes about the name that gave me a few lols though, so worth a look for those alone.

* After my visit I had another look for reviews and found this one  from 2014, by another food blogger called Rosie, turns out she’d an almost identical meal to ours… but hers was in June, which makes you wonder about how seasonally led the menu really is. 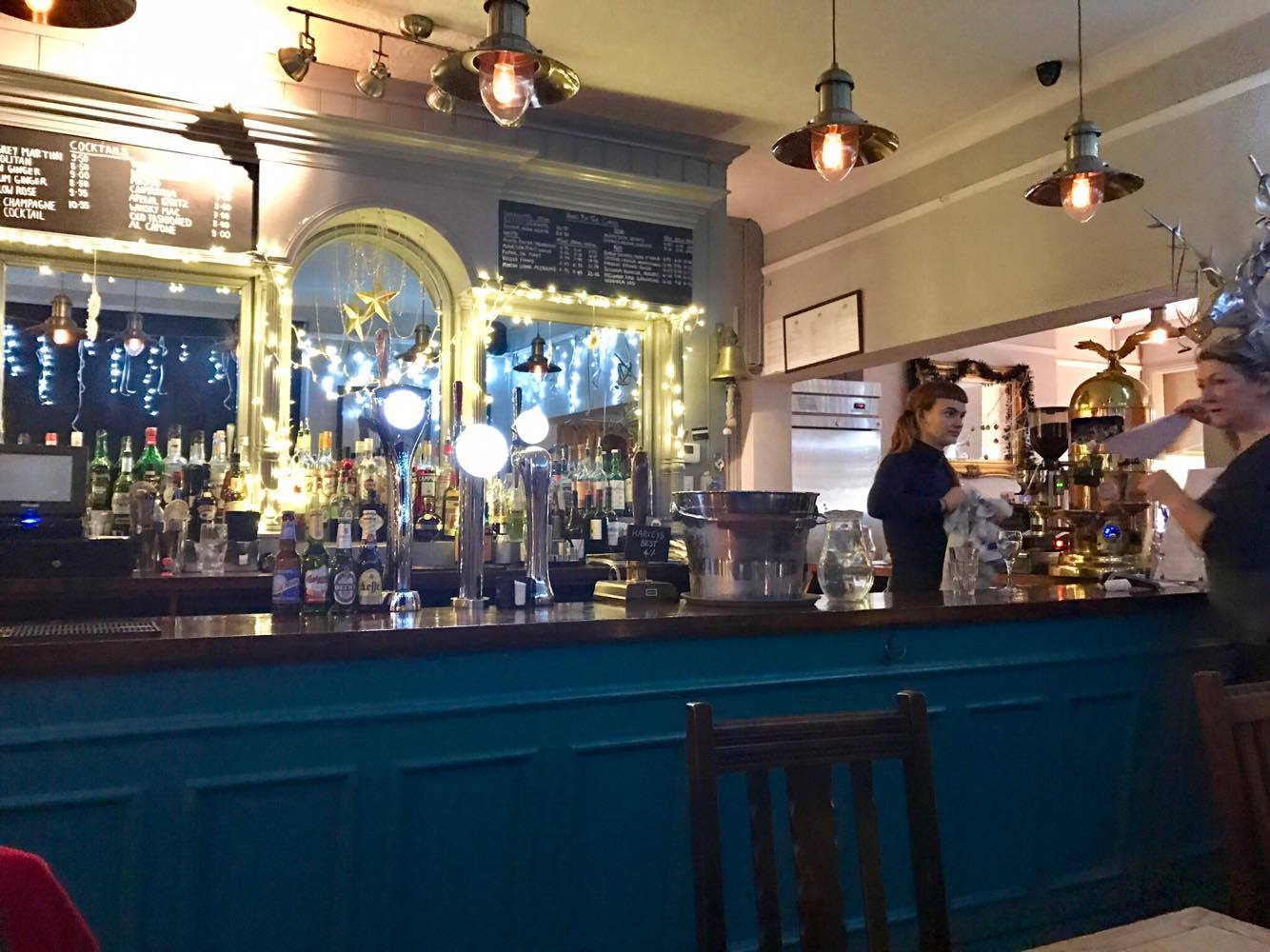 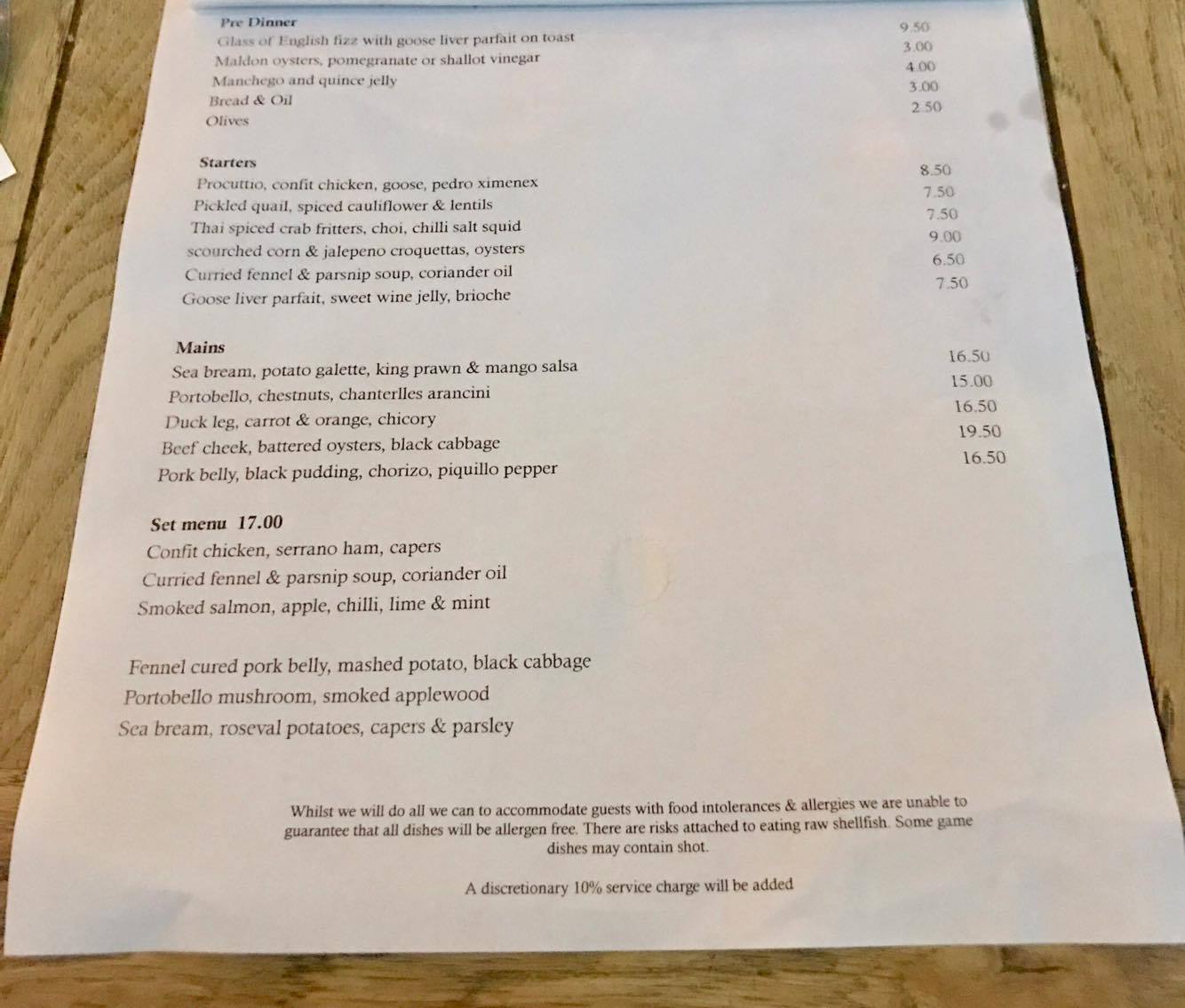 They describe themselves as serving ‘contemporary dishes in a laid-back foodie pub with a shabby chic interior’ which I’d say is a fair assessment. A la Carte is undoubtedly the most expensive way to dine (obvs) but they offer a £17 set menu for two courses during the week and £20 on Sundays.

For me, this menu doesn’t read well. The starters didn’t seem like the best partners for the mains and the numerous spelling mistakes left us both cringing – not a great start. 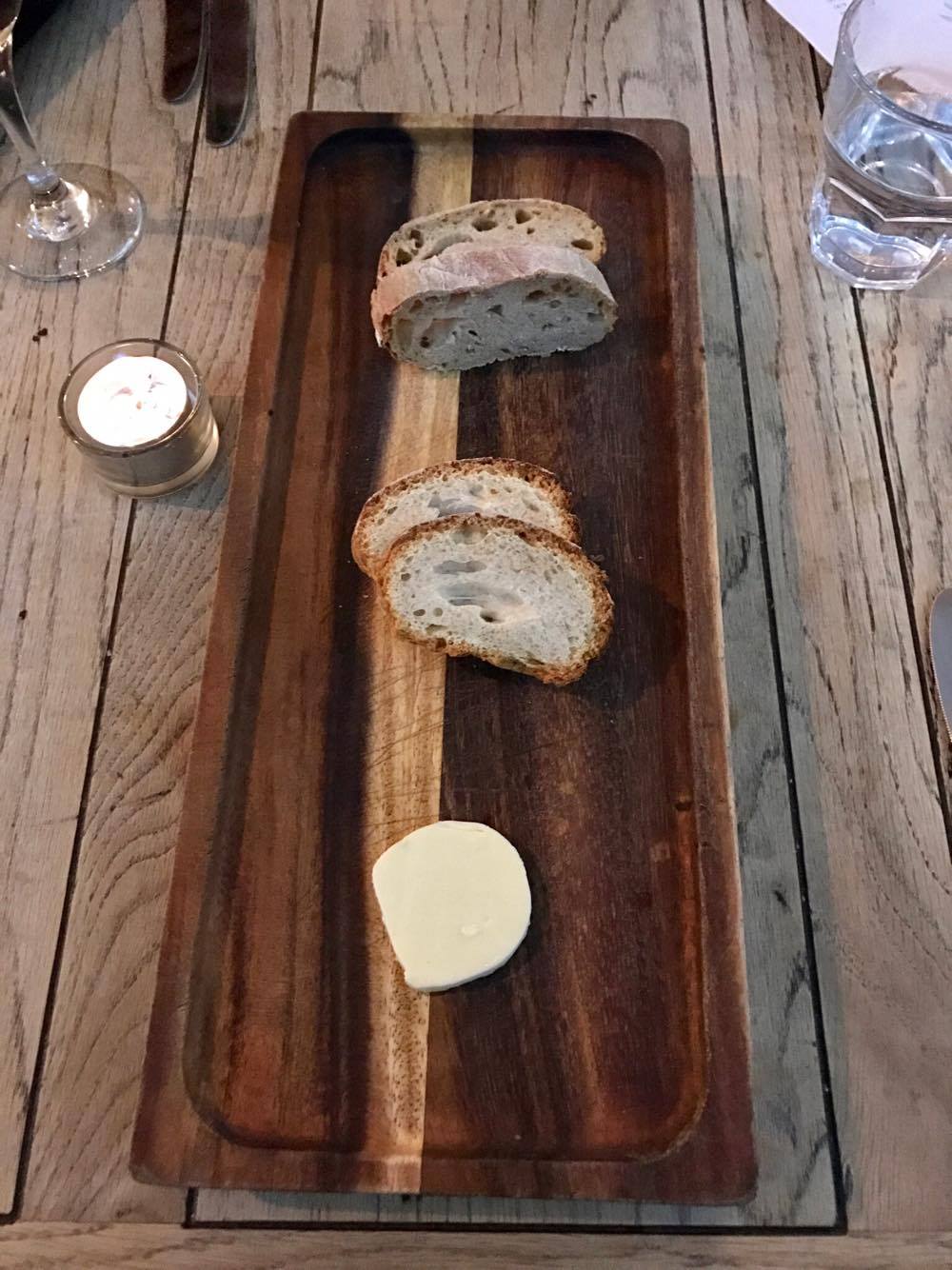 I’m not quite sure the board was big enough? Four teeny little discs of bread that were very slightly stiff around the edges and unsalted butter.  That’s all I have to say about that really. 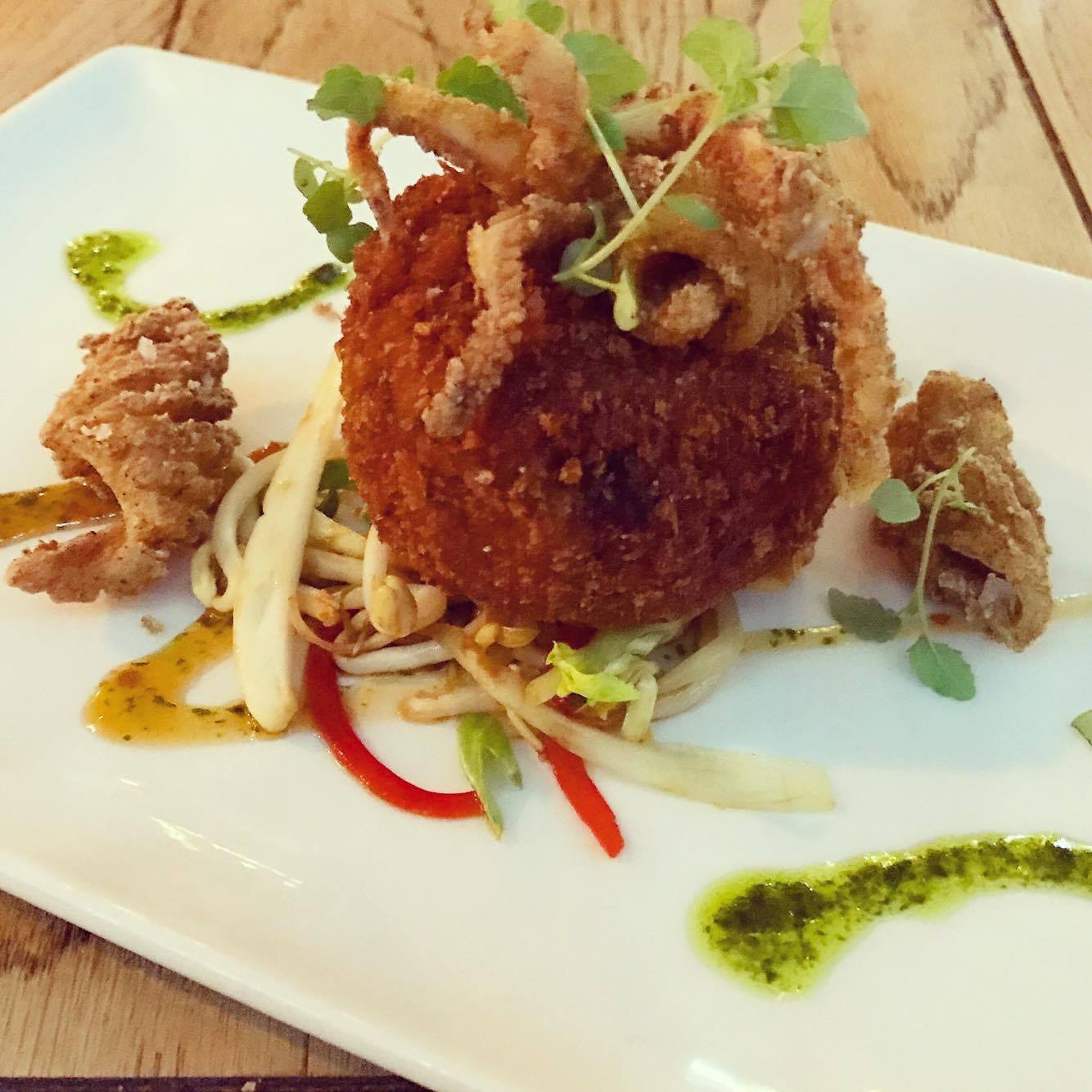 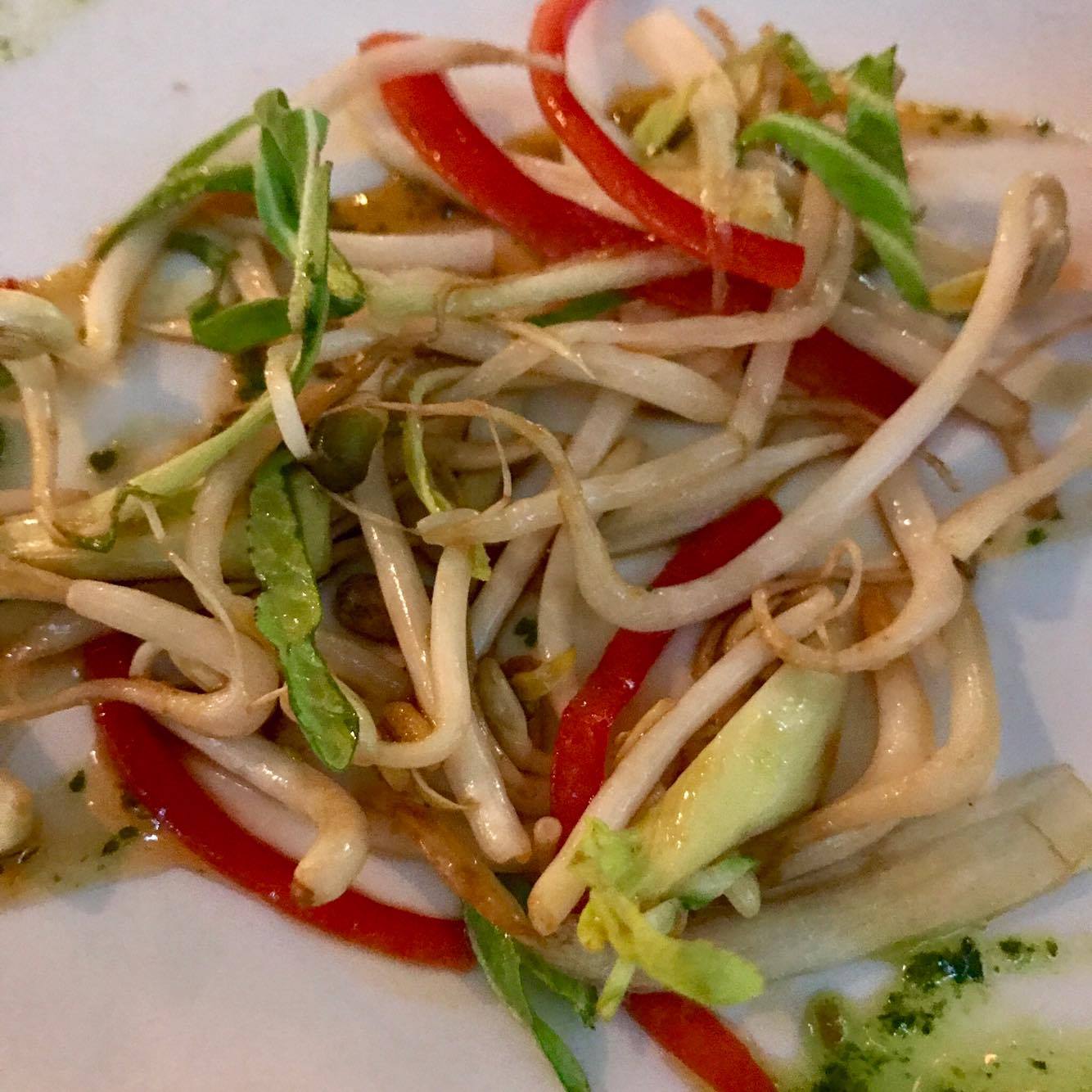 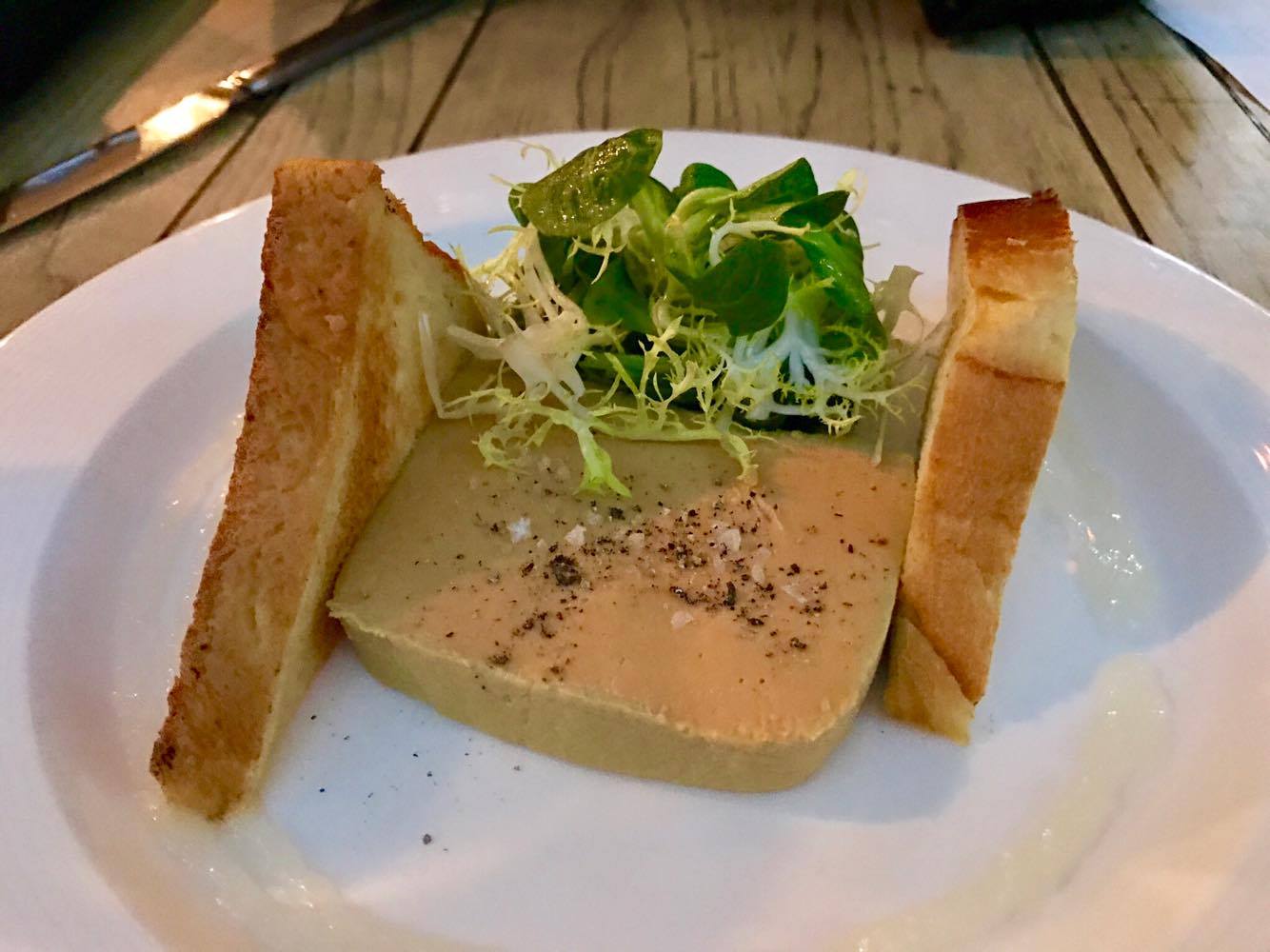 My overriding feeling about the crab fritter (£7.50) was that whilst the Thai spiced crispy coating was spot on, the inside was just too… wet. That and something in the taste was just a little off kilter, neither of us could quite place what, but it was. I also wasn’t a fan of the raw beansprouts and peppers it was perched on, I’m sure the intention was to add some texture, but they really needn’t have bothered. The squid was nice enough but would’ve definitely benefited from being crispy and served at a greater temperature than lukewarm.

There’s very few foods that I can’t abide, I mean, I can count them on one hand, but topping the list would have to be smooth meat pate. I gave the goose liver parfait (£7.50) a try, as I always do, but in addition to looking fairly unappealing, the bitter aftertaste really didn’t do it for me at all. I’ll try again next year. 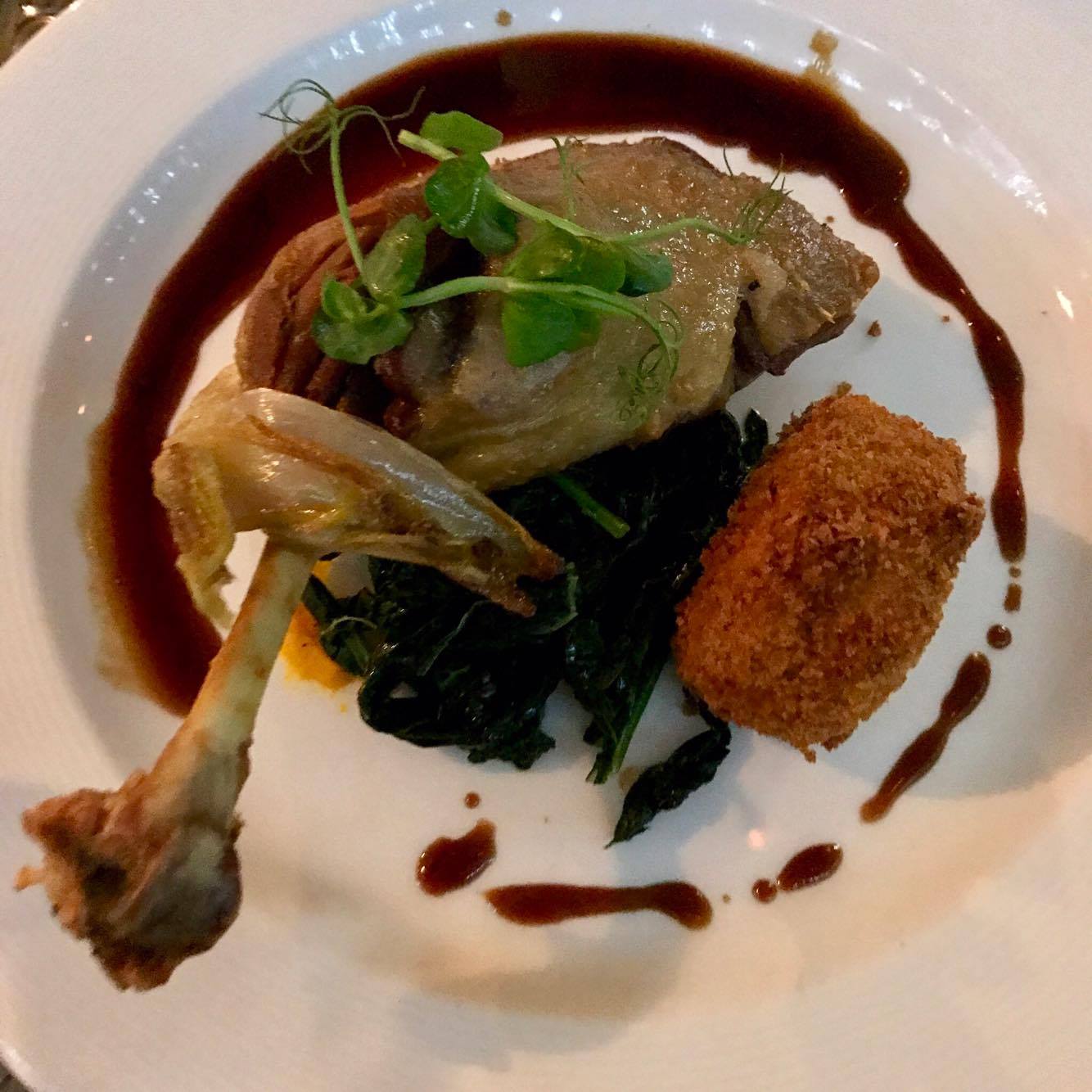 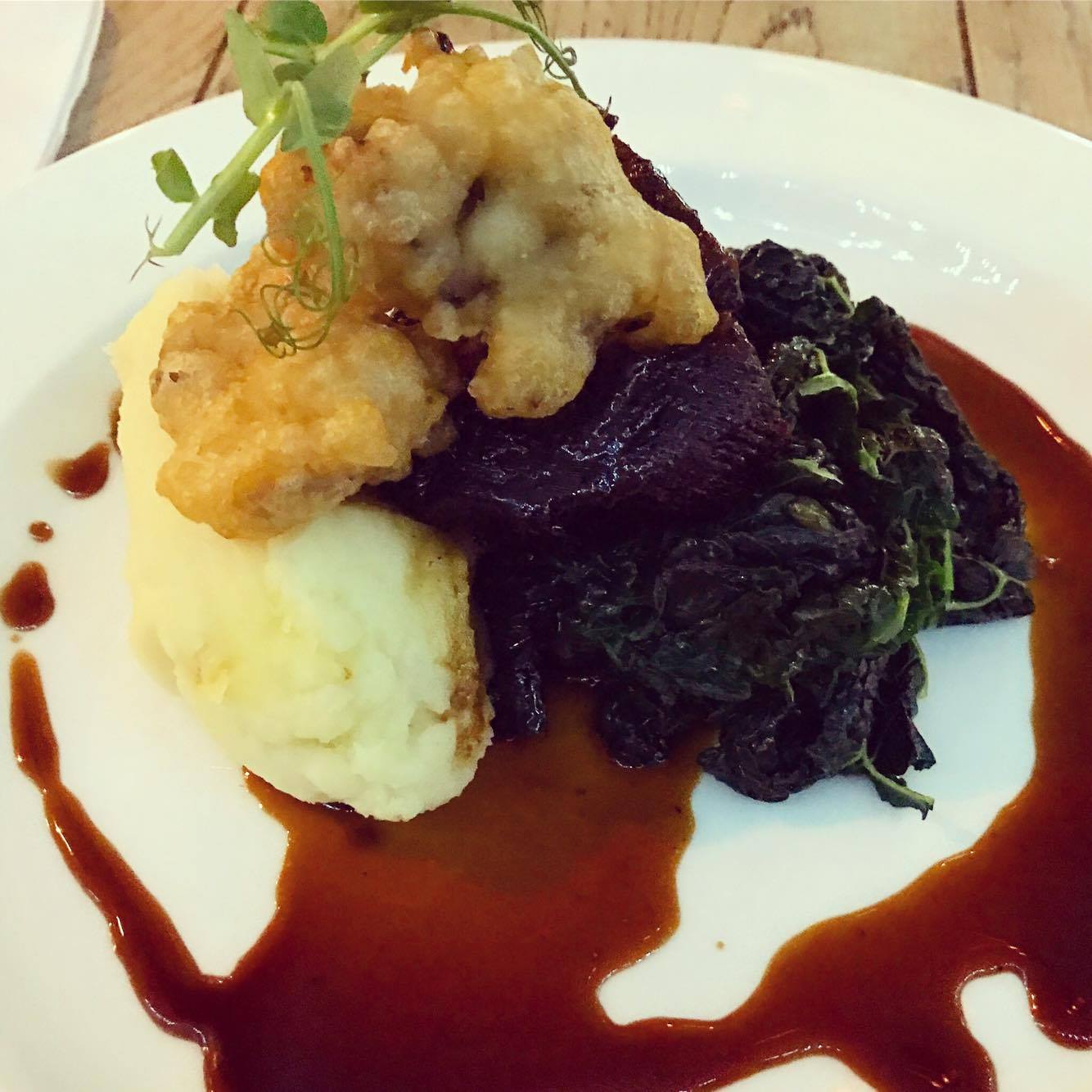 We both agreed that the mains were a vast improvement on the starters. I went for the beef cheek with battered oysters and black cabbage with a side of triple cooked chips (as the mash it came withwasn’t listed on the menu). Simple, delicious and every element accurately cooked, I don’t have a bad word to say about it really – it wasn’t mind blowing, but as a cosy winter warming dish, it ticked all the necessary boxes.

Fran went for the duck with chicory* (£16.50) which we both agreed was OK, nothing remarkable, could’ve benefited from more jus, but on the whole a solid pub meal offering.

*Unless chicory is the same as cavalo nero then the person writing the menu was mistaken, again. 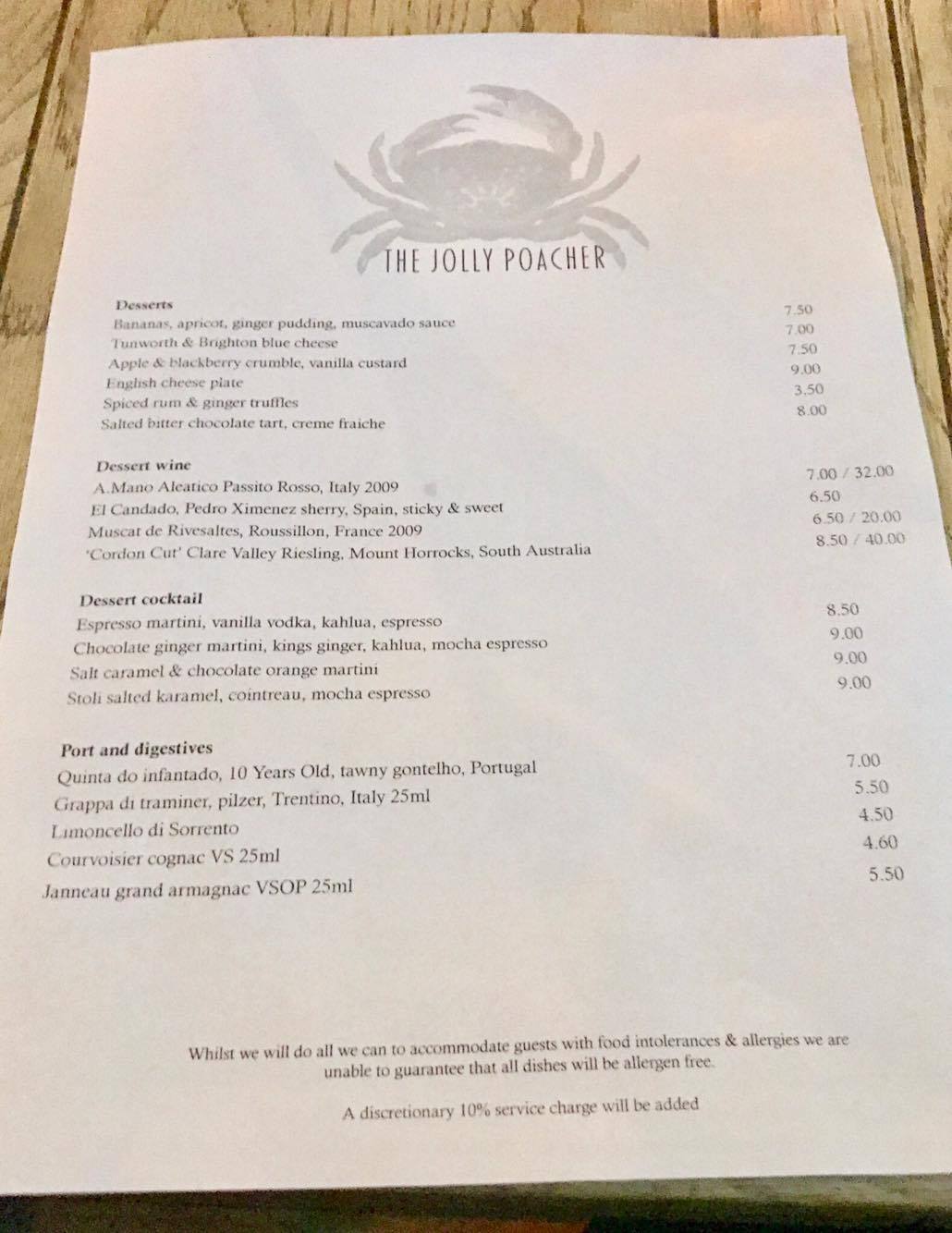 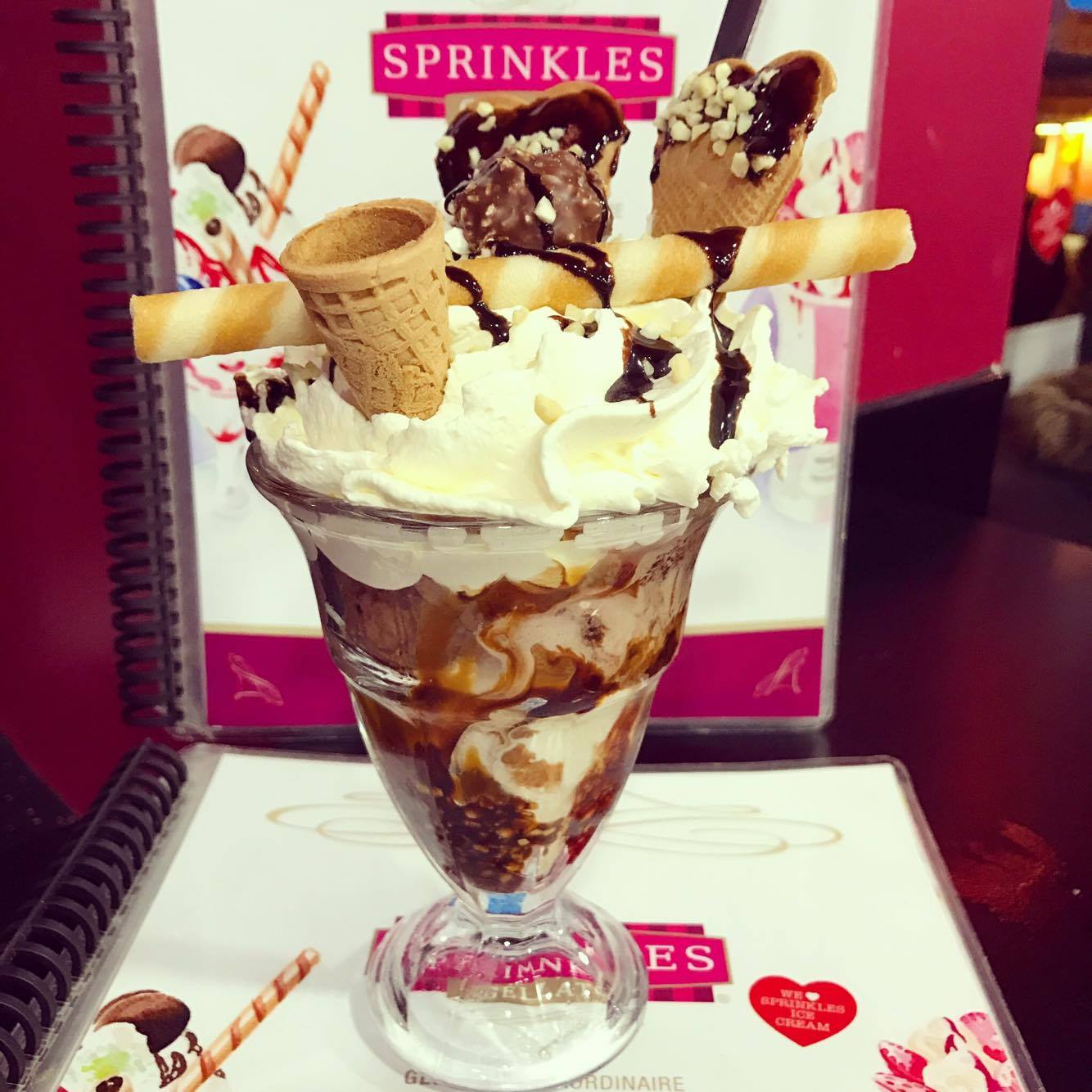 We tried with the dessert menu, the banana pudding wasn’t available but as neither of us really fancied any of it anyway, we ended up… on West Street! I can highly recommend the Ferrero Roche sundae at Sprinkles – only a fiver, and they do ‘freak shakes’ too. 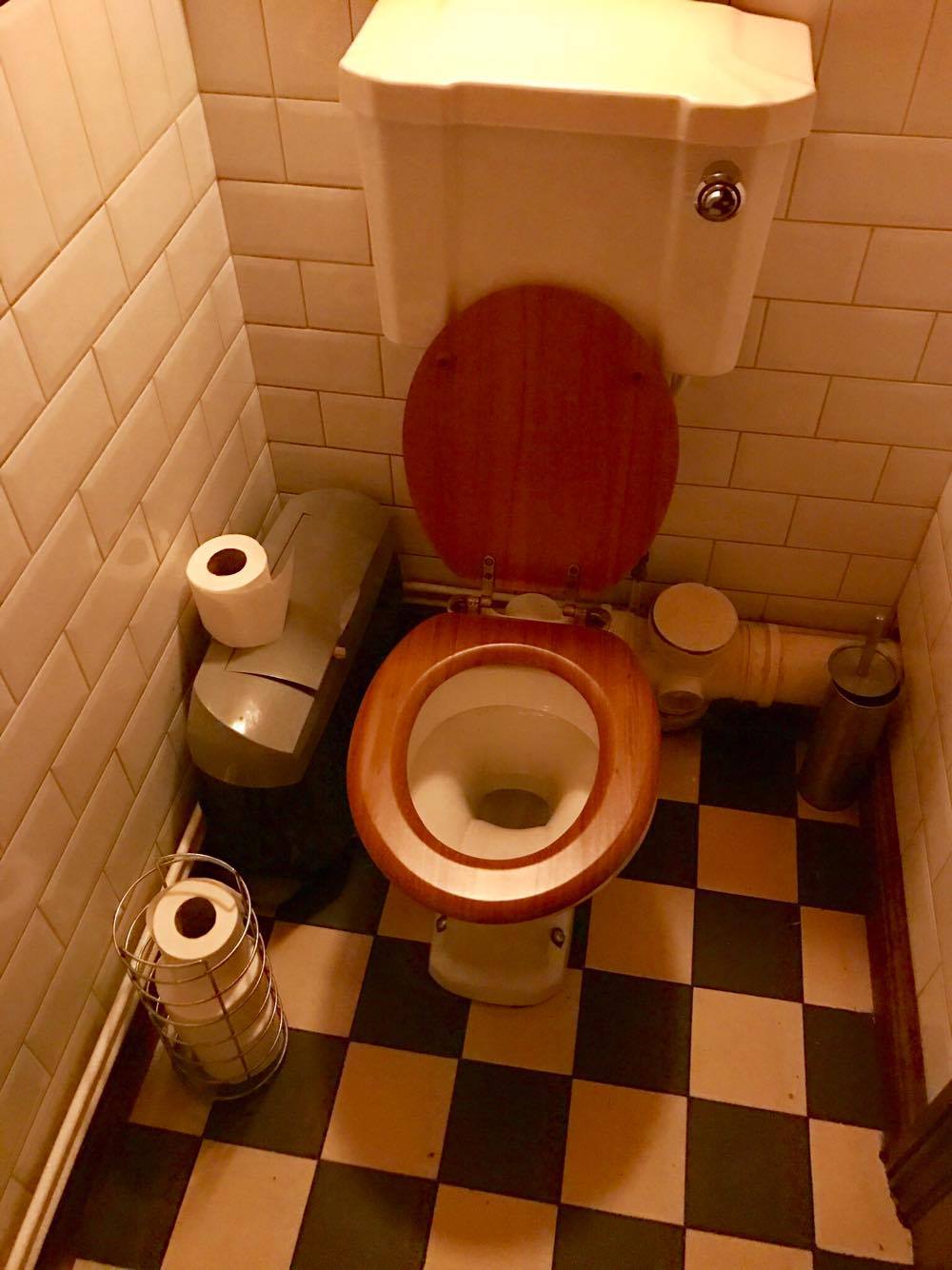 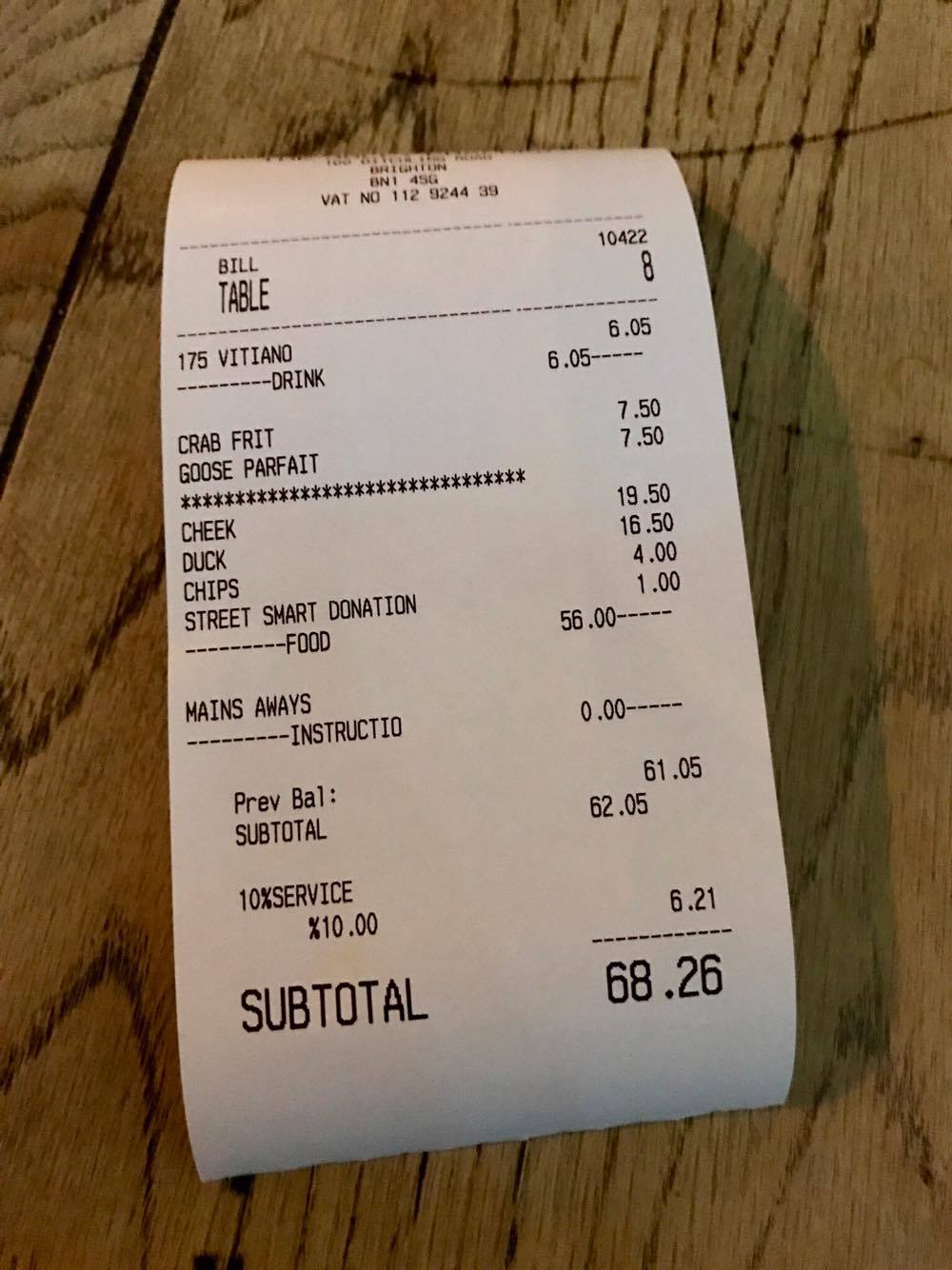 It’s not cheap, is it? I feel like you could get a meal almost anywhere decent in Brighton for that money, and in many cases it would be better, and cost less.

It’s also unfortunate that my visit to The Jolly Poacher came in a month where I write a post summing up my favourite meals of the year, and cast my votes in the Brighton Best awards – the meal I had just didn’t match up to the majority of those on my lists. I expect ten years ago it would’ve been rated as outstanding, but there’s just too much competition now, and mediocrity will (and does) get drowned out but the dozens of fabulous places to eat in the city.

Check out Fran’s review of The Jolly Poacher, here.

Have you been to The Jolly Poacher? Where’s your favourite place for Post in the comments section or hit me up on my social networks (links below).