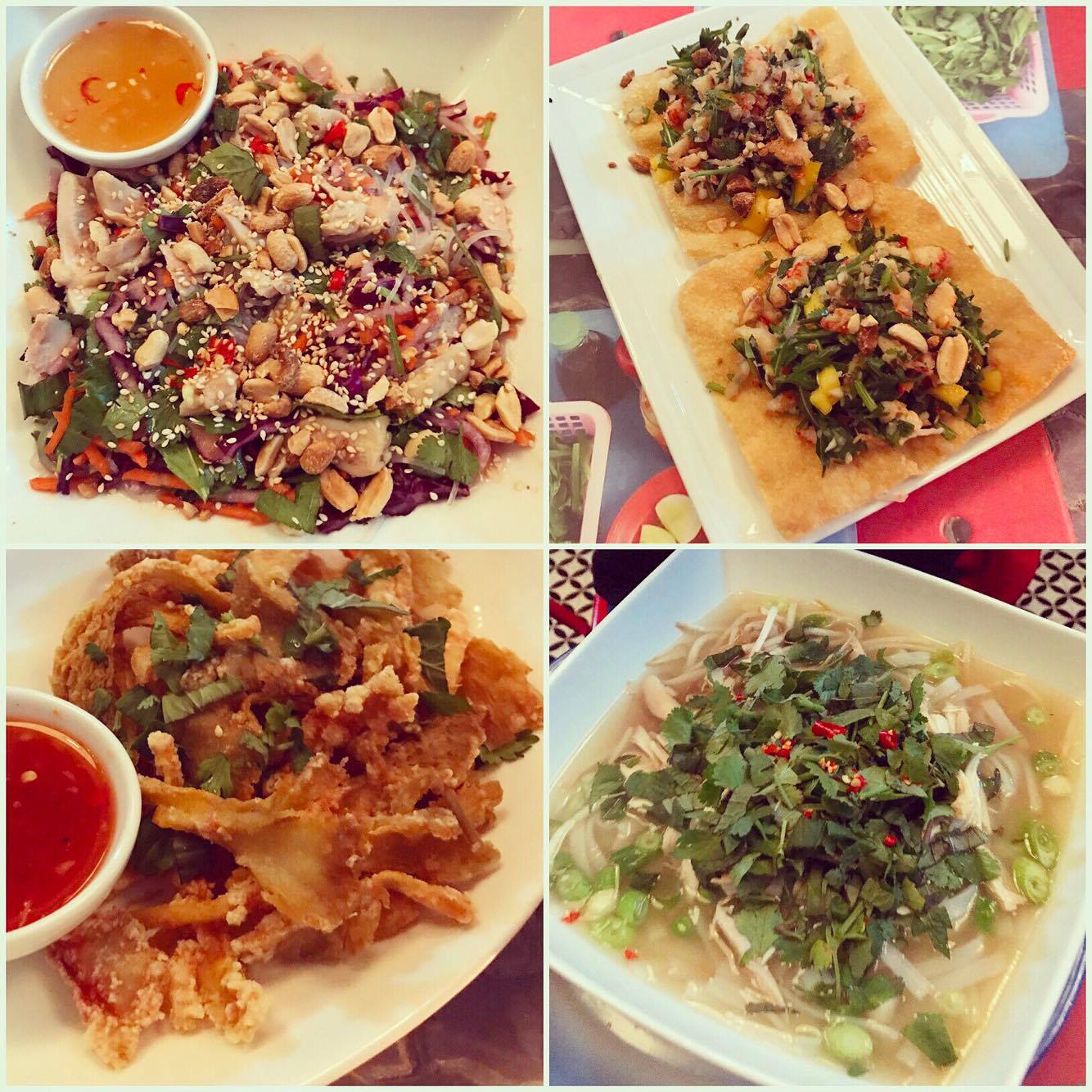 Brighton is a bit short on options when it comes to Vietnamese restaurants, so when I heard about the opening of Holy Phok late last year, I pencilled in a date with one of my very favourite eating partners, Fran (The Graphic Foodie) and we crossed the border to Hove in search of the good stuff.

I am not even going to attempt any ‘phok’ related puns, I tried out a few in my mind but they definitely weren’t anything even resembling funny – so I’ll spare us all. 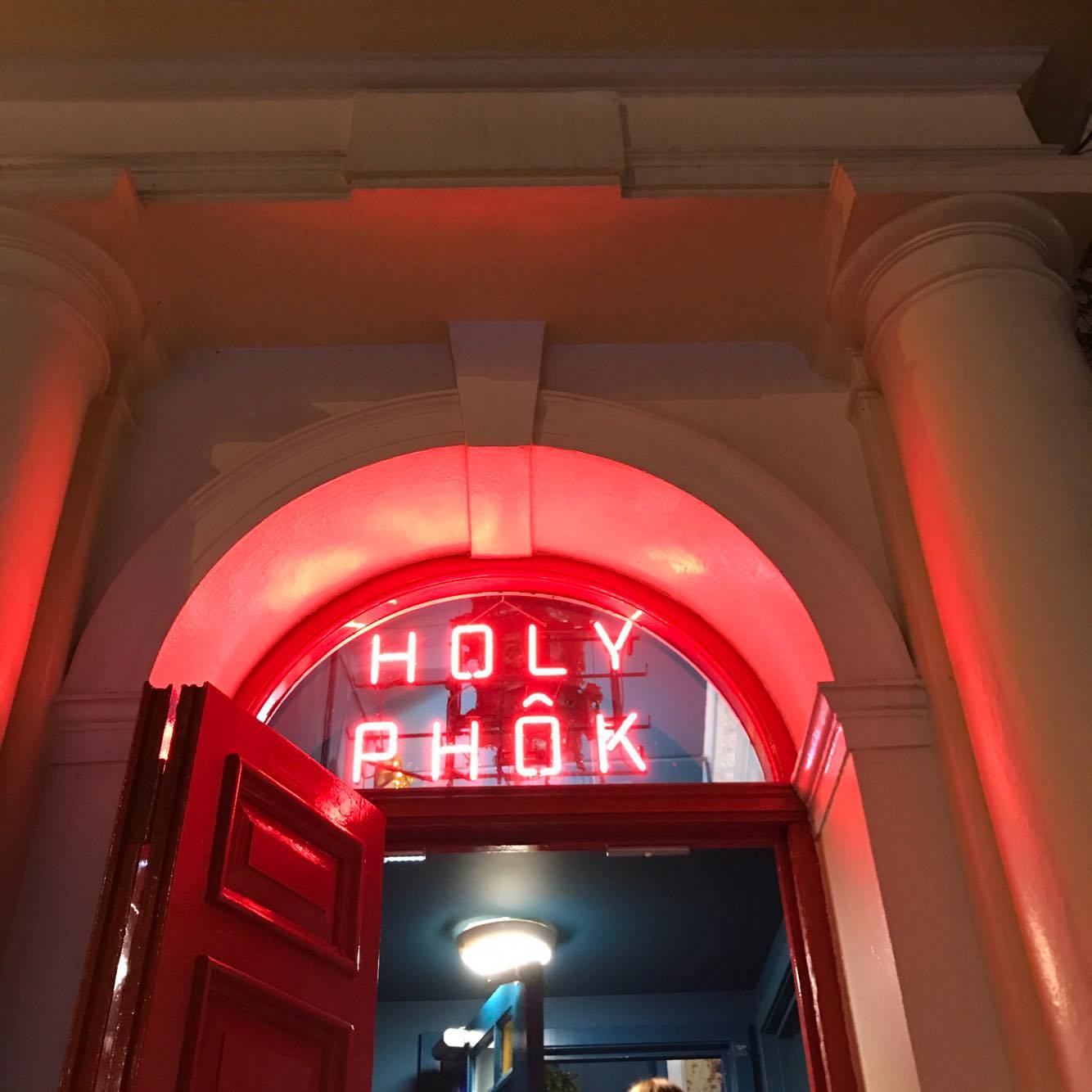 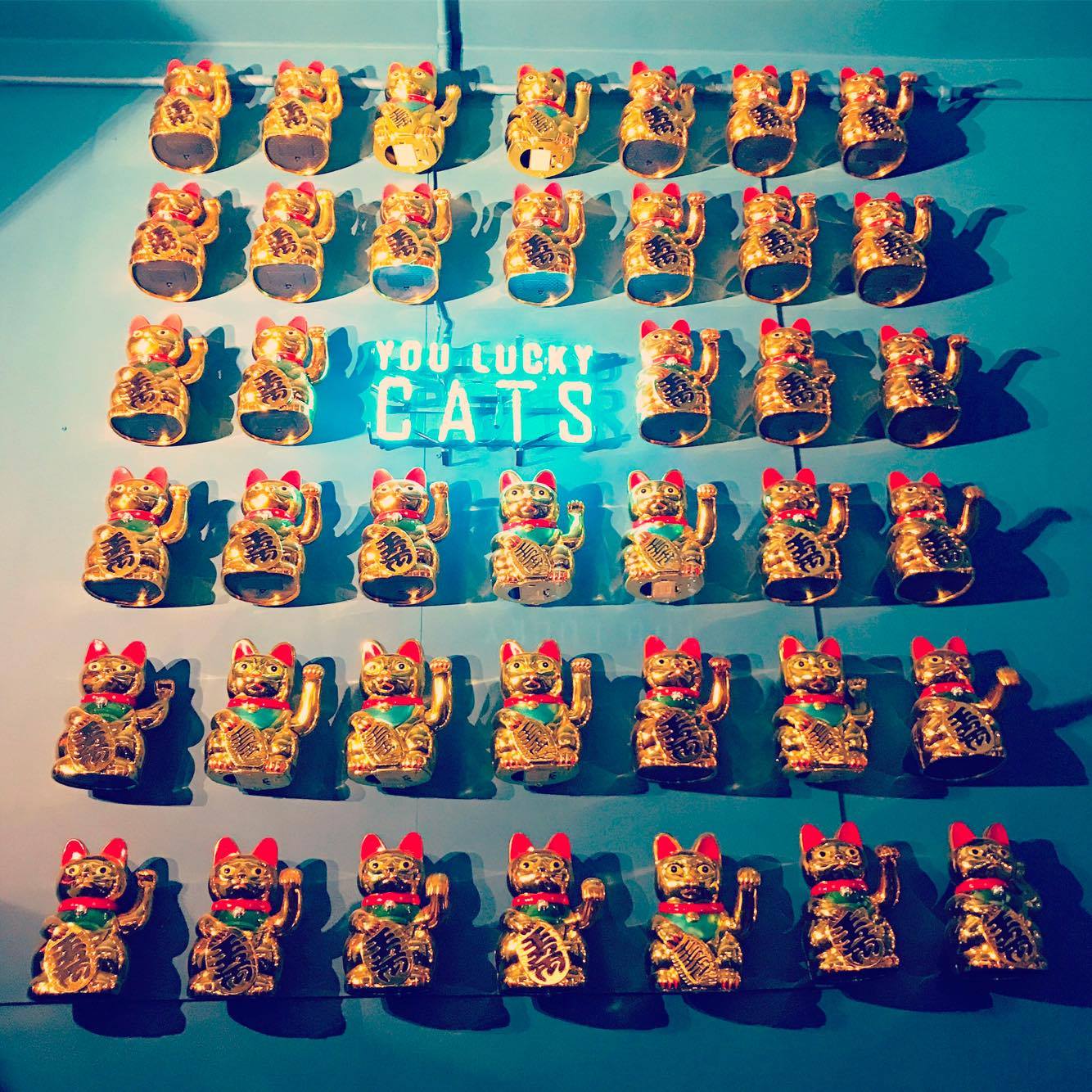 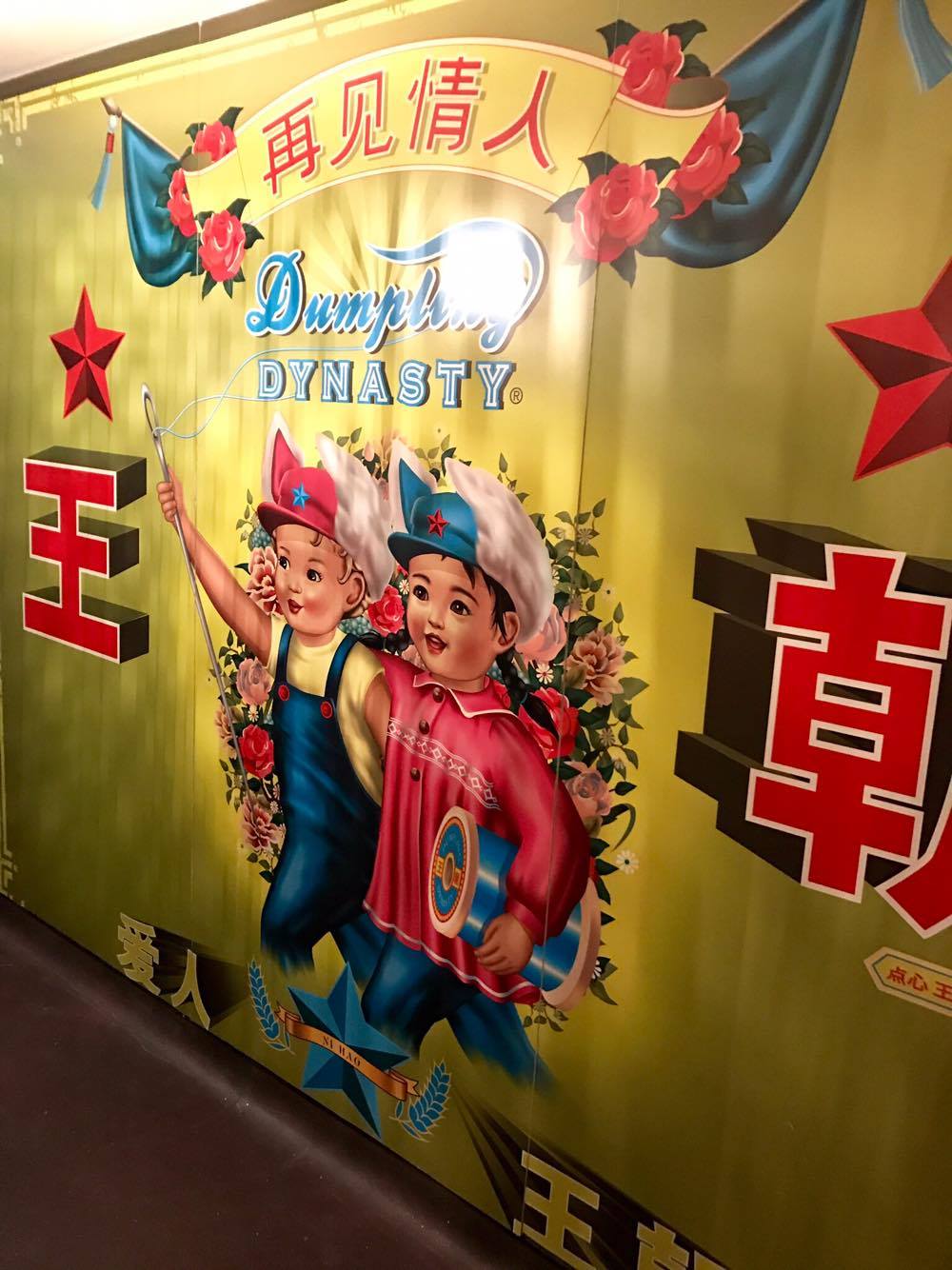 I can’t for the life of me remember what used to be in this venue, but whatever it was, they’ve made it a really cool little space. Geometric floors, bright colours and a wall of waving cats, it’s a migraine sufferers worst nightmare, but fun and the Instagram opportunities are endless. 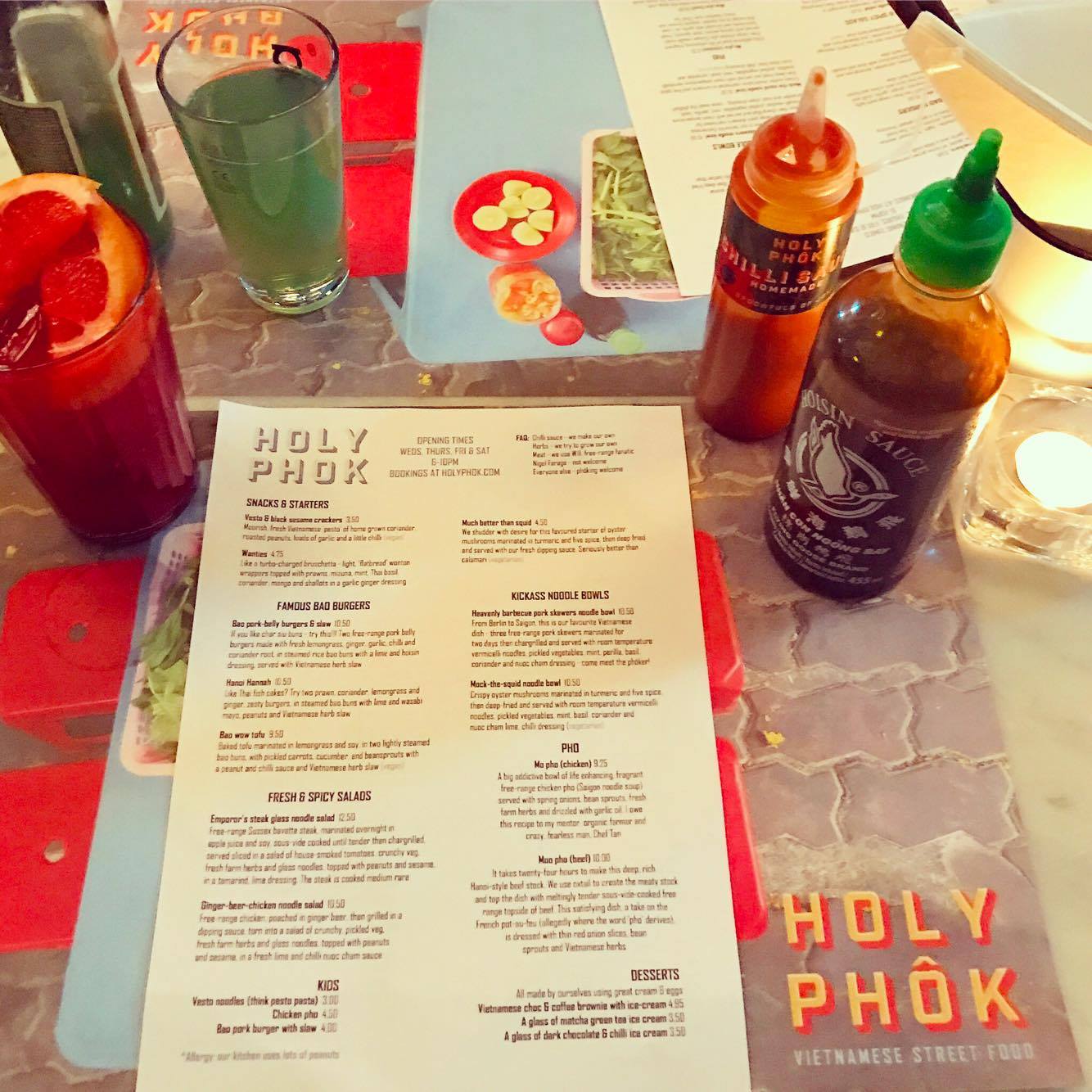 The lively menu isn’t extensive, but all present and correct, with a nod to the branding throughout. Big thumbs up for the use of only free range meat, sauces made on the premises and home grown herbs. Both Fran and I deliberated over our order for much longer than we usually do as it all sounded so interesting.

In terms of drinks there’s cocktails, mocktails, a few beers and some worryingly neon coloured fizzy drinks. I can highly recommend the raspberry-based funky monkey cocktail, it has a proper kick to it. 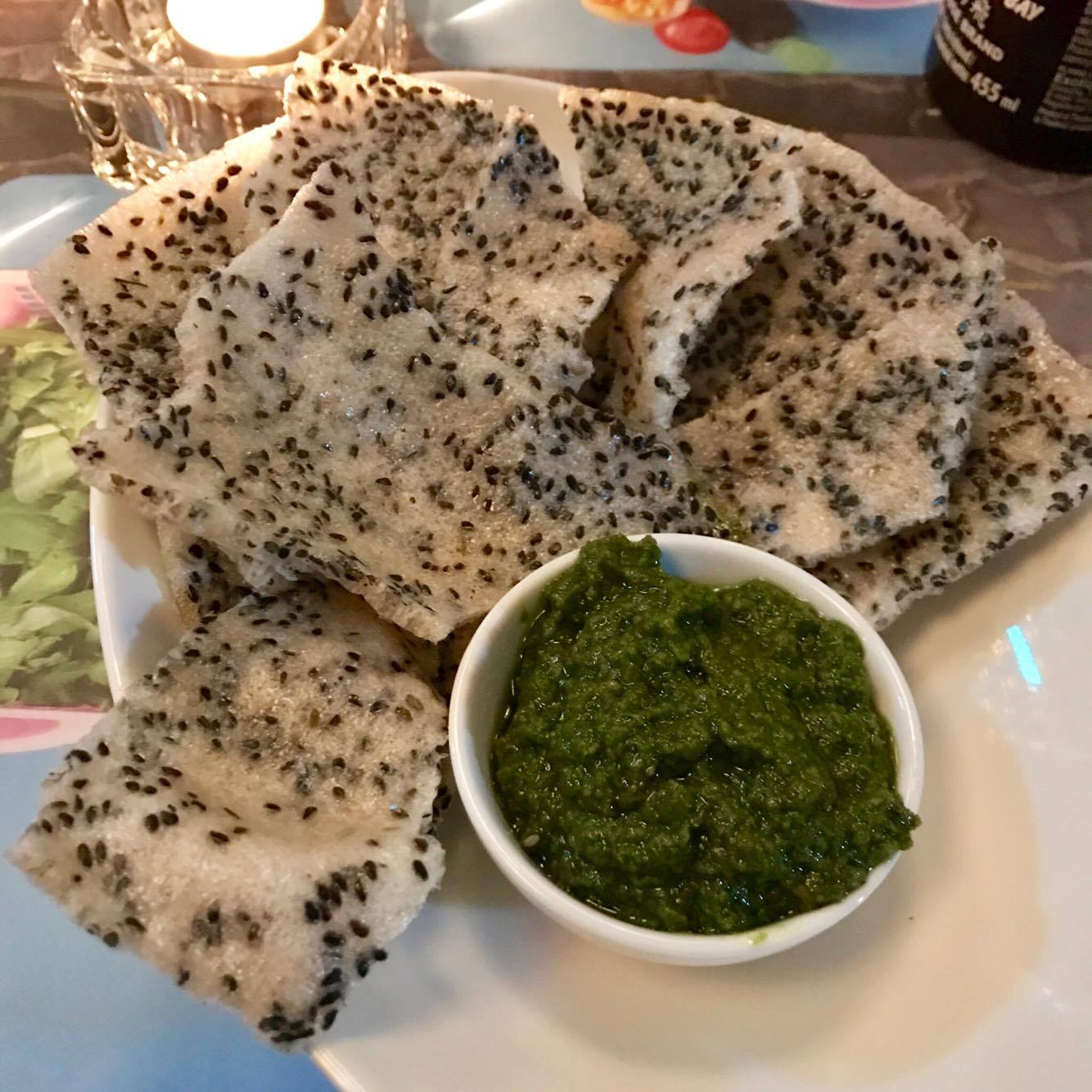 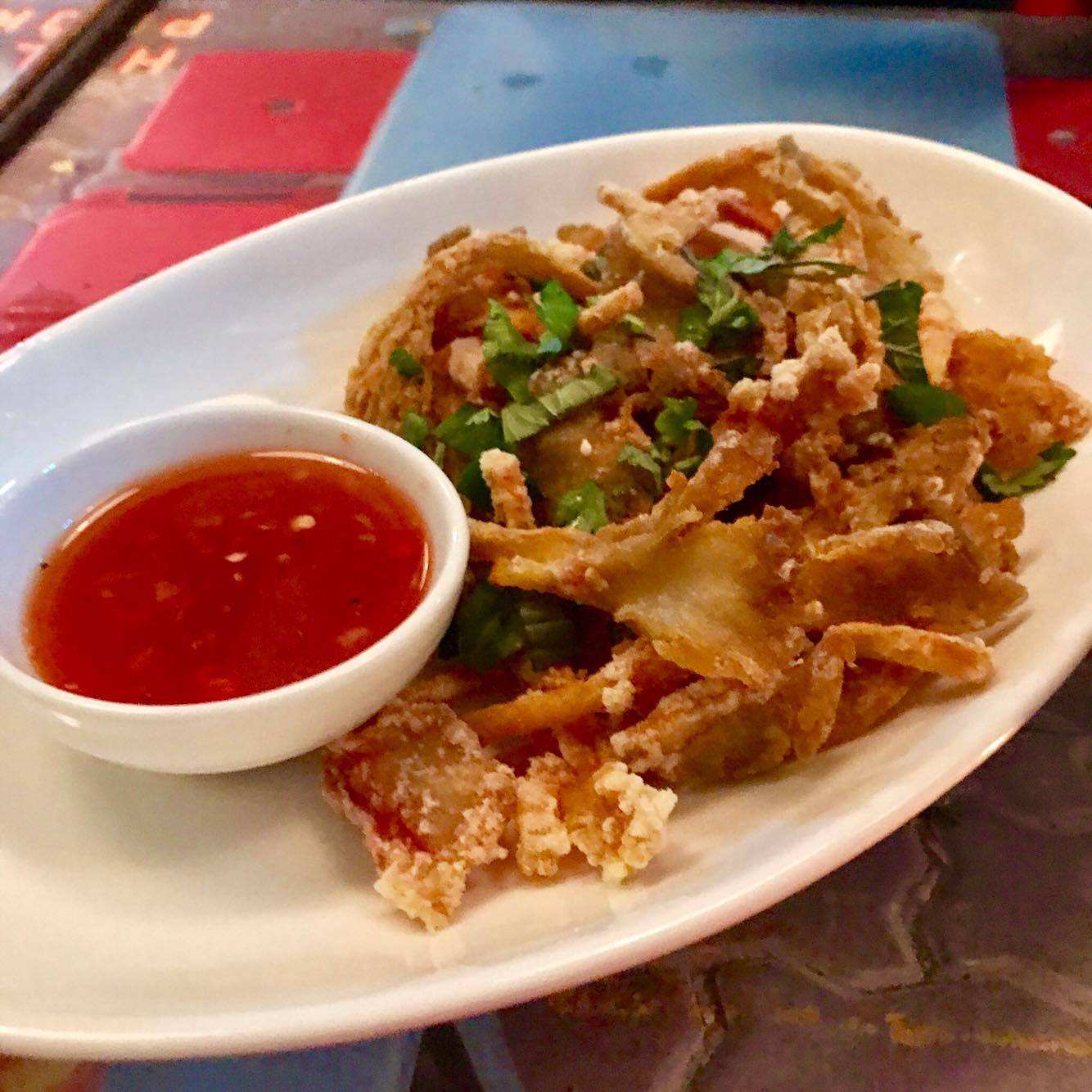 I tried all three of the starters and the best of the bunch was the ‘much better than squid’ (£4.50). The spiced oyster mushrooms definitely weren’t dissimilar to calamari after a blast in the deep fat frier, they just didn’t make me ‘shudder with desire’ more than any actual fried cephalopod I’ve consumed. I enjoyed them enough to order on both visits, they’re something a bit different and a great option for vegetarians too.

The ‘wanties’ (£4.75) came on a ‘flatbread’ that was more of a poppadom consistency and piled high with herbs, mango and prawns in a ginger and garlic dressing. An absolute bugger to eat logistically, but in terms of taste they were spot on. 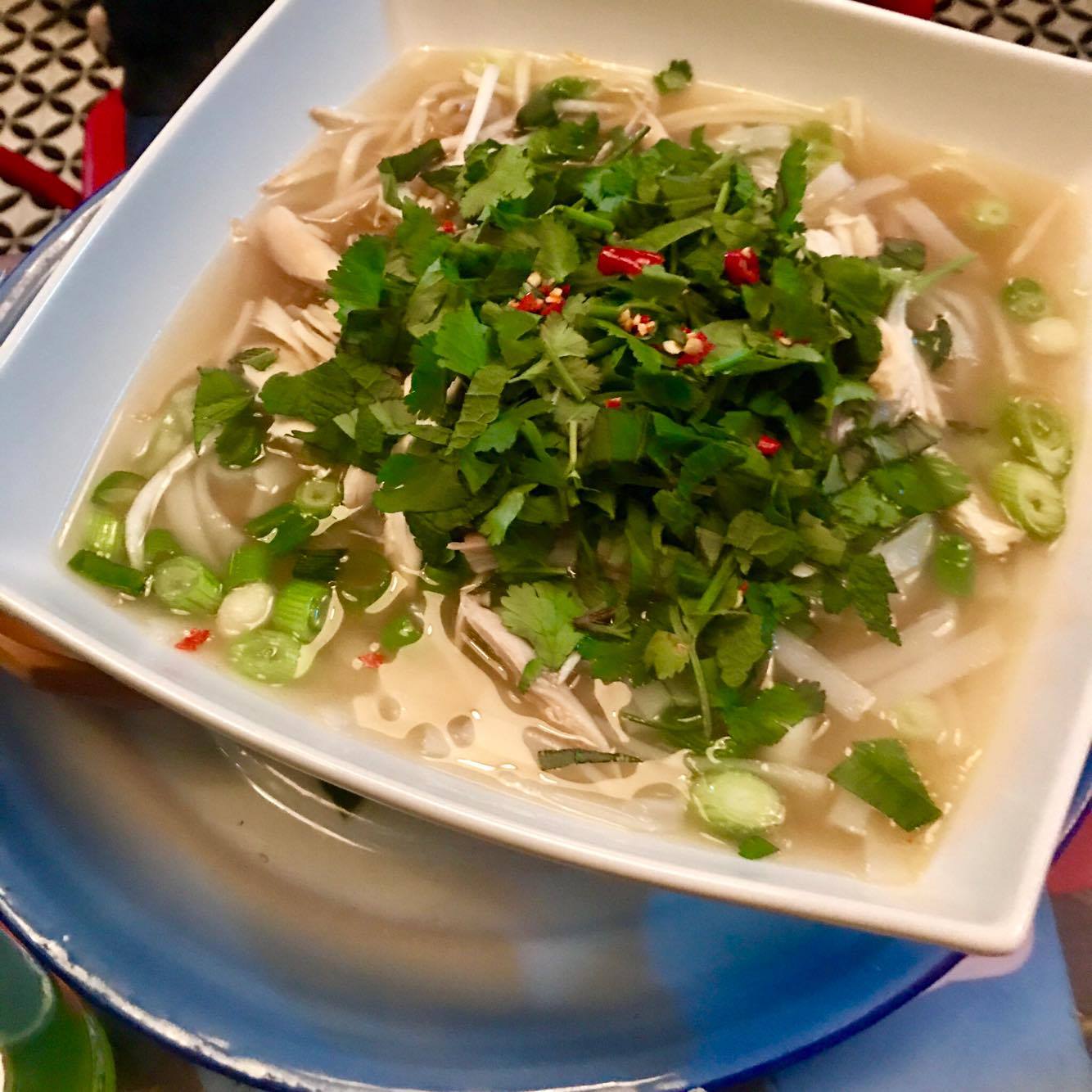 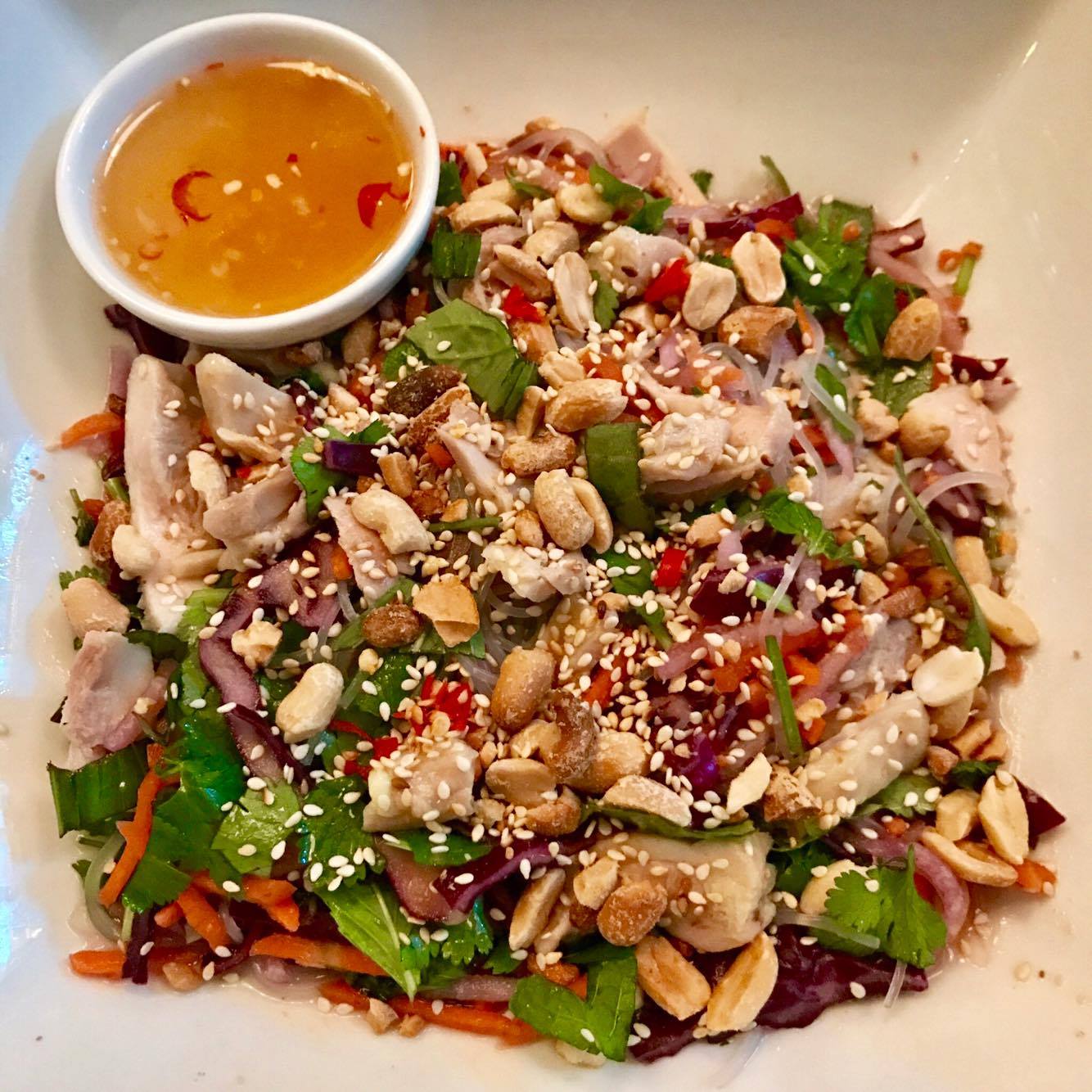 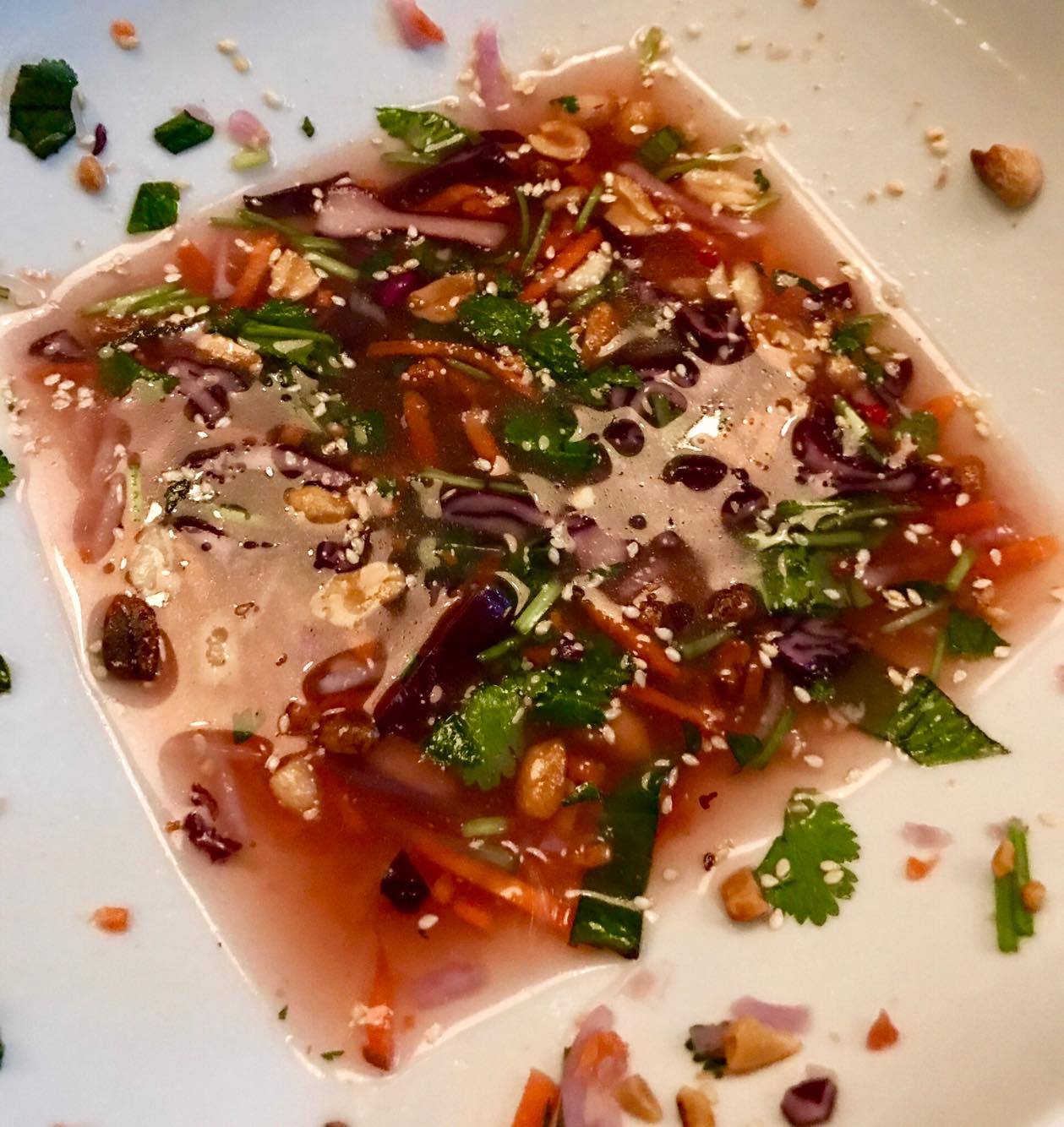 I’m pretty adept at picking the winner from a menu, and unusually (you won’t often catch me ordering salad as a main) ‘the ginger beer chicken noodle salad’ (£10.50) called out to me, but as soon as I took a mouthful I knew I’d backed the wrong horse. The meat, which had been poached and then grilled, had promised so much in the way of flavour, but in reality tasted of little else than any old cold roast chicken. The tangy lime-based dressing in which it was swimming did far better, and was fragrant and delicious, but made the overall effect more of a cold noodle soup (I even drank the remainder with a spoon) with a pleasing crunchy element from the toasted peanuts and sesame seeds. It wasn’t in any way unpleasant, I just wouldn’t order it again.

I make a lot of noodle soup at home, sometimes pho (recipe here), but mainly ramen (recipe here), and I know that by design the latter has a lot more depth to the broth. However, if I’m going to plough my way through a whacking great bowl of anything, I want it to have some kind of impact, flavour-wise, and I had high hopes for Holy Phok’s offering. I tried some of Fran’s chicken pho (£9.25), and whilst it wasn’t terrible, by any means, it was just a bit… blank. You can read her full review of our meal at Holy Phok here.

After a wistful glance at the neighbouring table’s food, we both wished we’d ordered the bao buns (£10.50) and vowed to come back and try them, which I did a couple of weeks later. 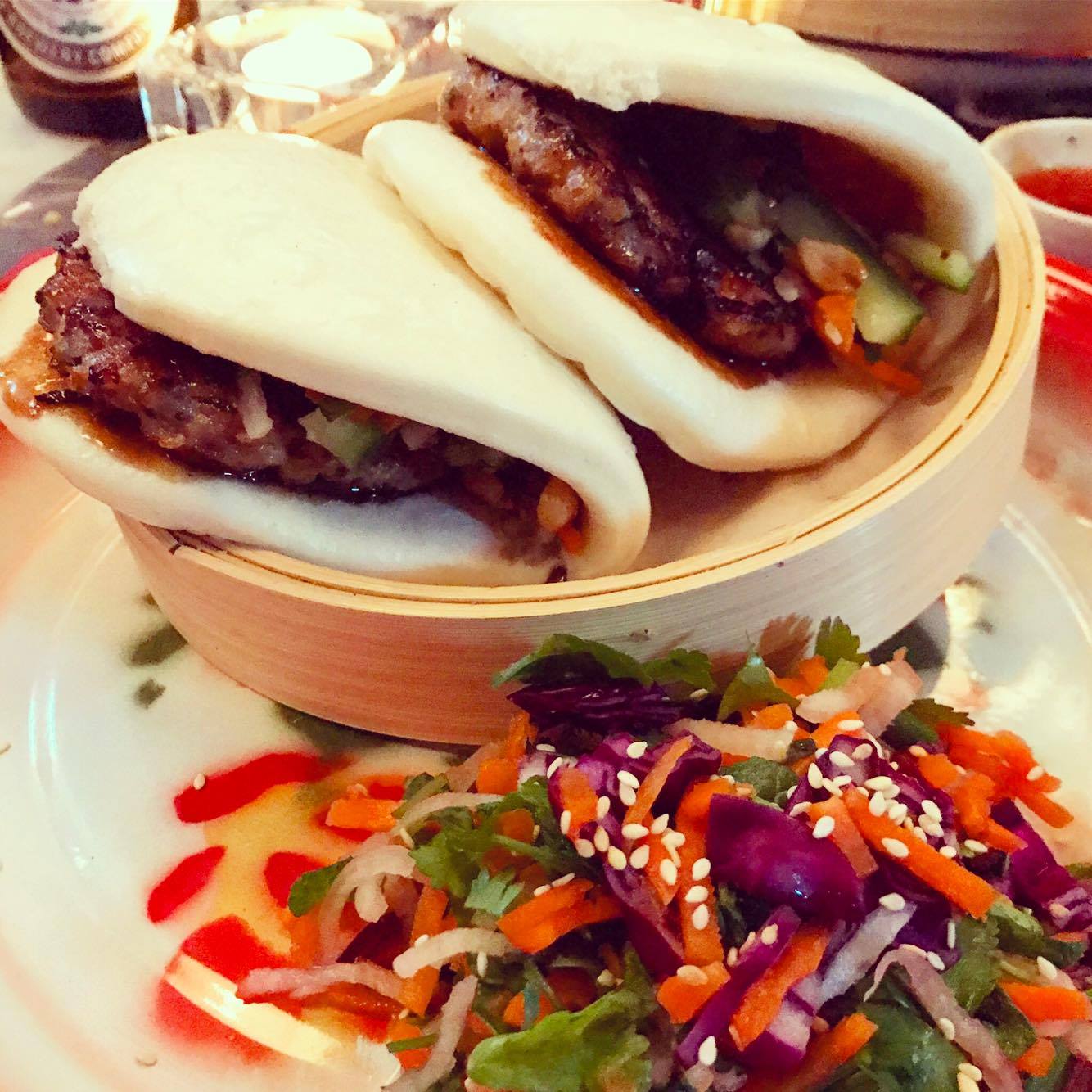 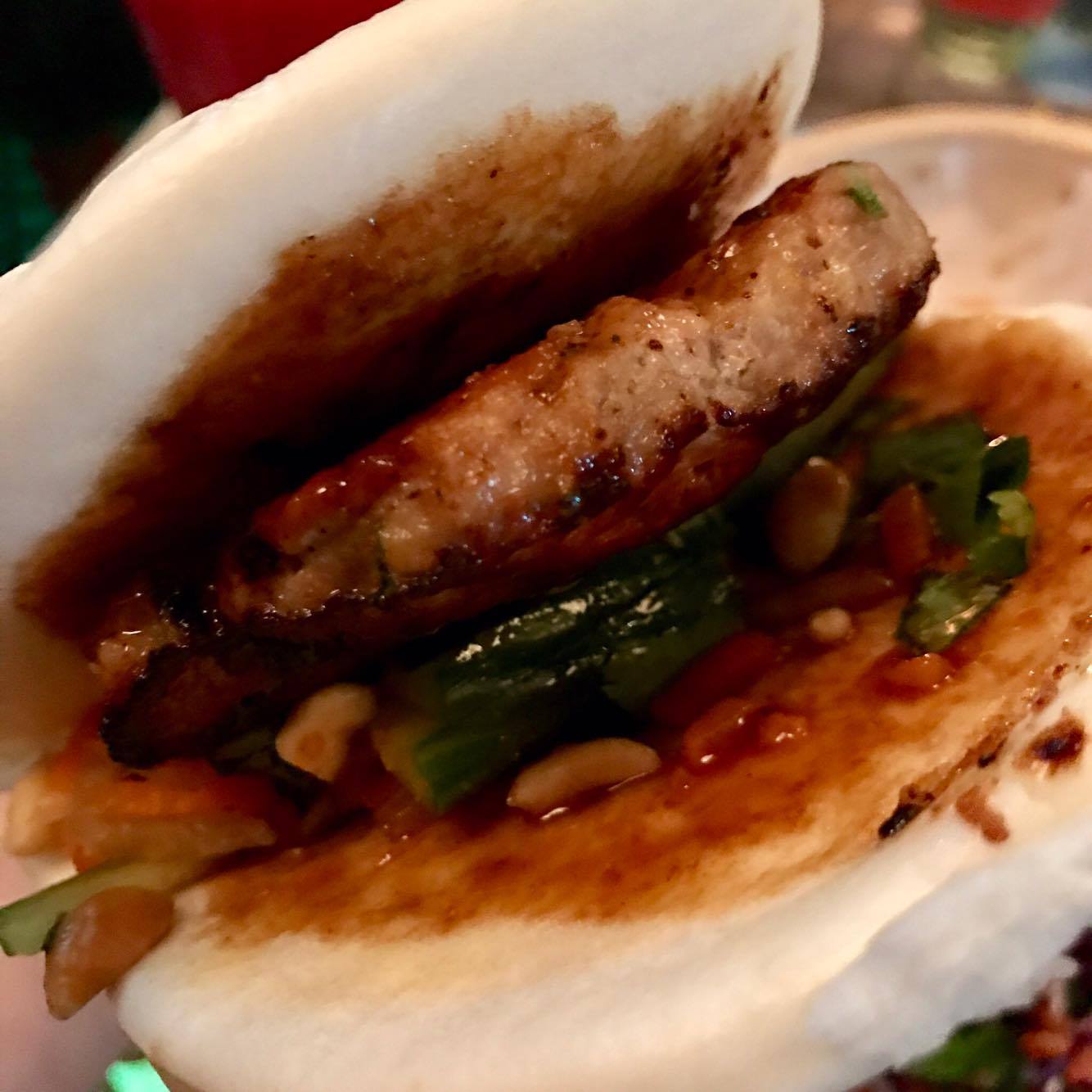 I was convinced that after my second visit this review was going to include a recommendation to change the name to ‘Holy Buns’ but after trying them, I’m not so sure now. Whilst the pillowy bao themselves were absolutely textbook, I’ve never had one with minced pork made into a patty, and I’d kind of had it in my mind that the meat would be shredded or in slabs. Although enjoyable and demolished in full by us both, they would’ve been at another level had the pork been served like the below (a good friend’s bao buns from her food truck). 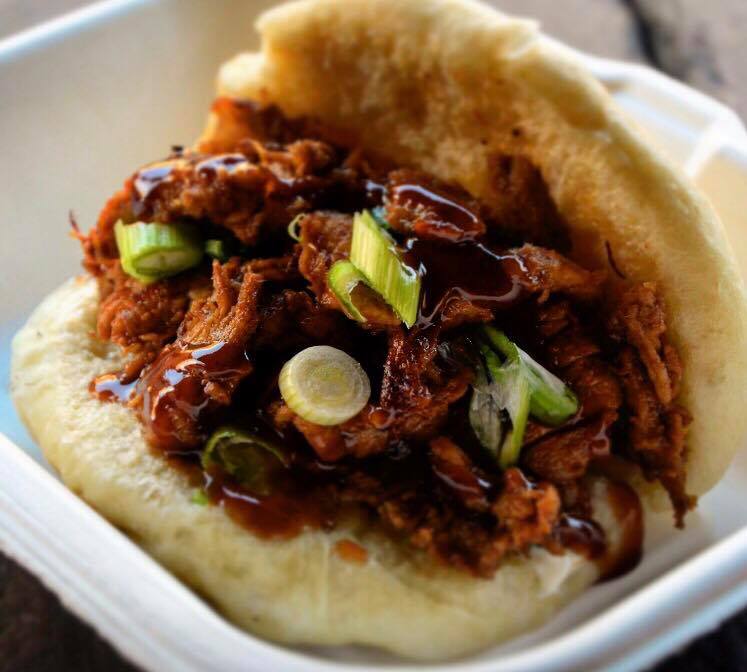 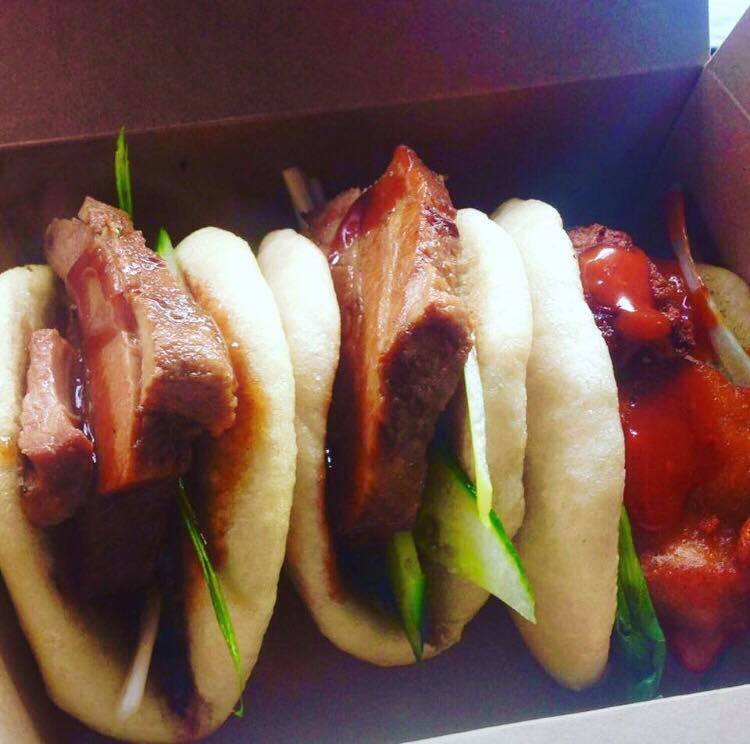 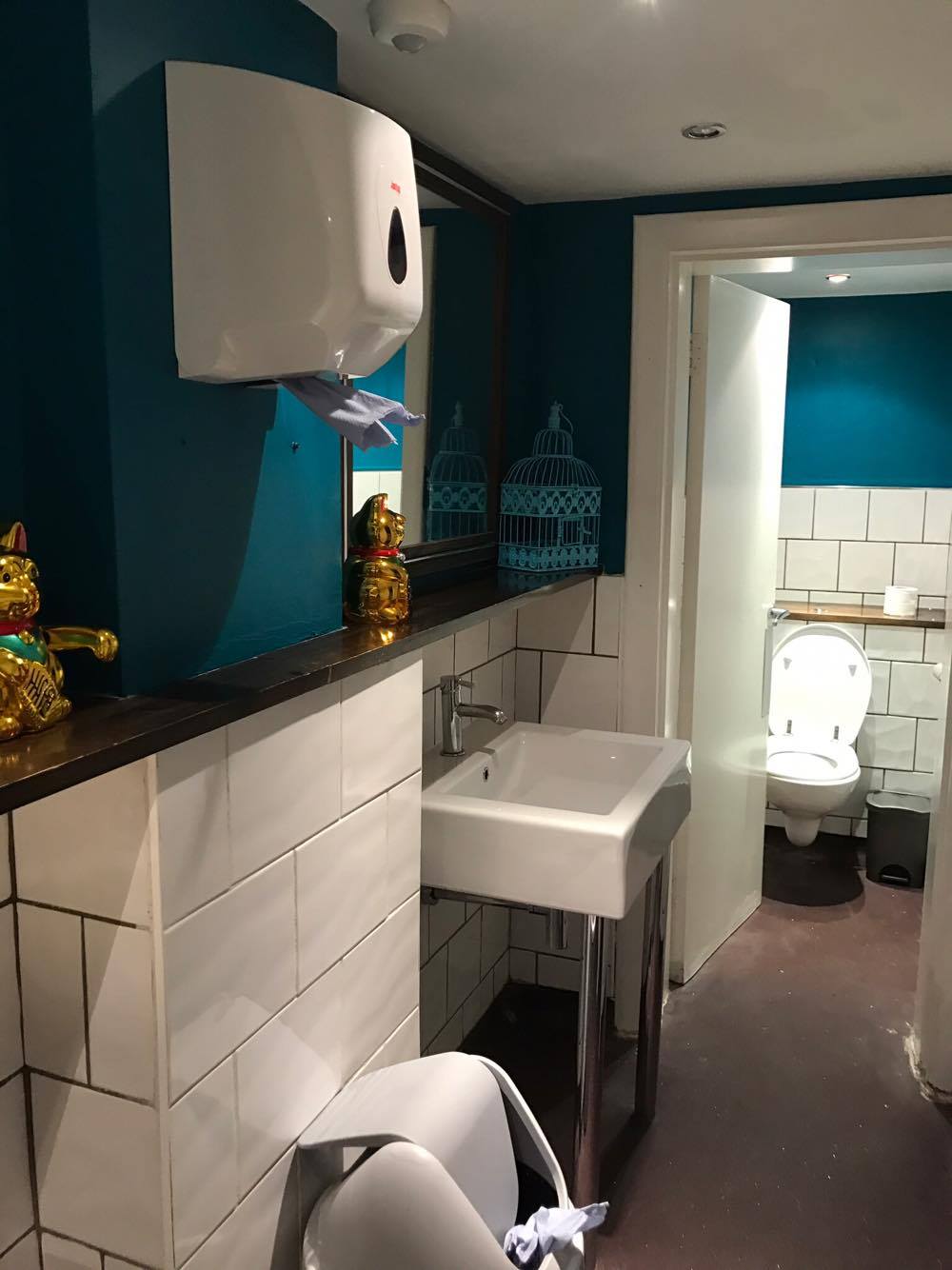 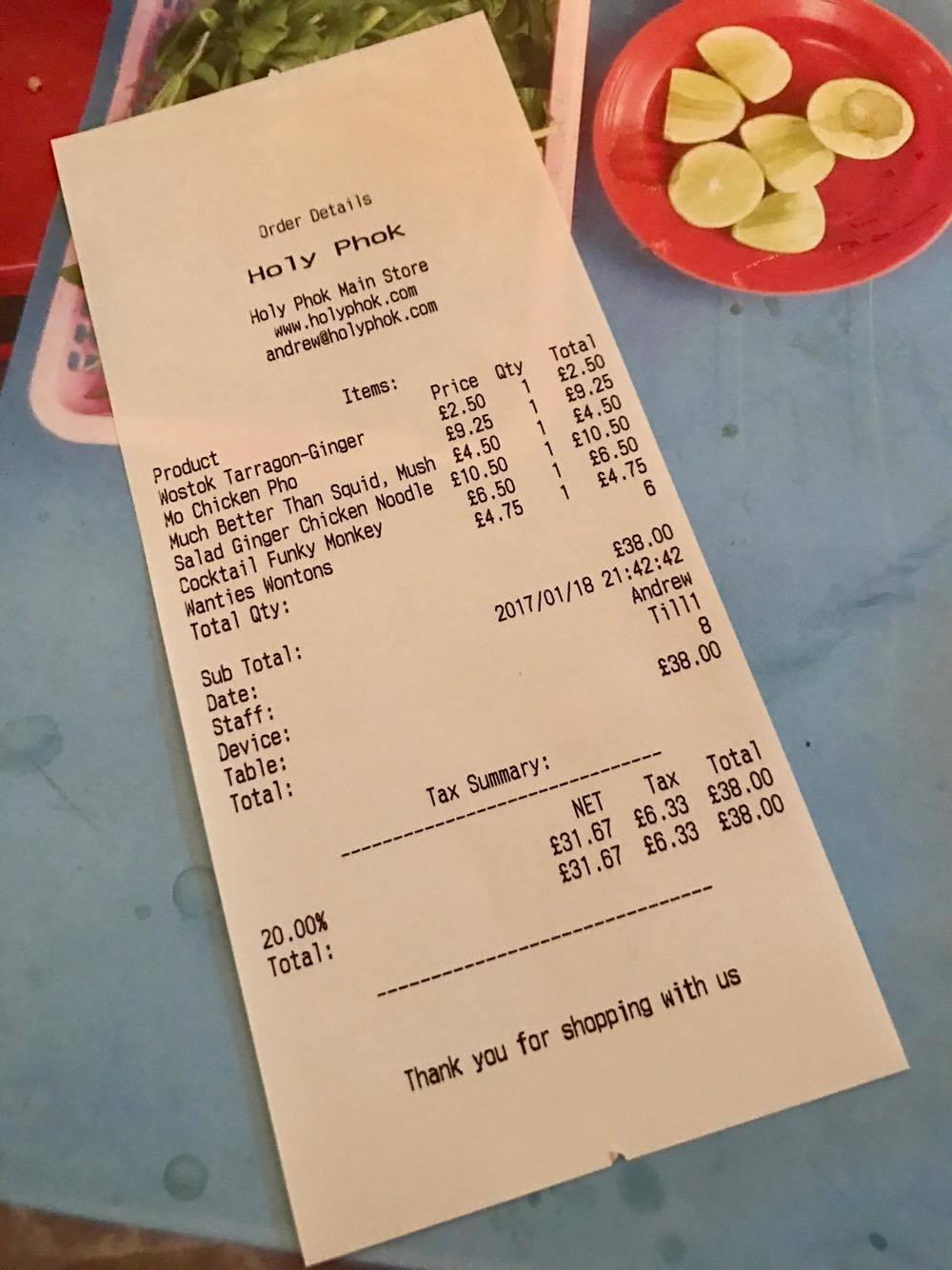 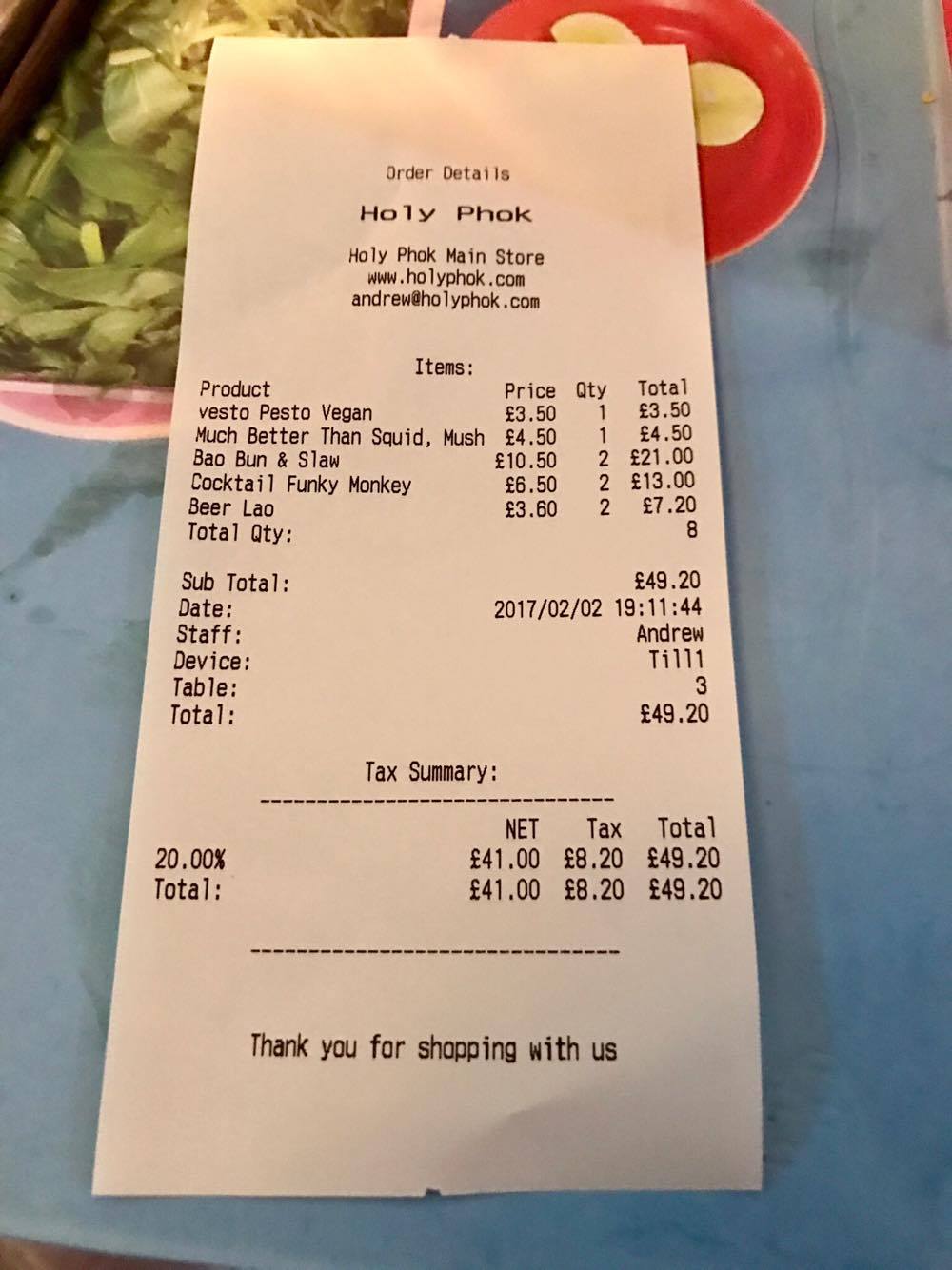 Overall Holy Phok has left me in a bit of a quandary. I liked the food but it certainly isn’t anything special, however with a couple of  tweaks I think it could be. Would I recommend? Tricky. I enjoyed both of my visits, however, if it’s a big ol’ bowl of noodle soup you’re after then I can recommend at least five better places to go. But then do they have the fun factor/ambience of Holy Phok? Absolutely not. I’d go again but I wouldn’t do so in a hurry. Back to the original question of would I recommend? I wouldn’t not recommend… sorry if that’s not a definitive answer, but it’s all I’ve got.

Have you been to Holy Phok? What were your thoughts? Where’s your favourite place for Pho in Brighton? Hit me up in the comments section or on all manner of social networks, links below.